I own the sc307s, but i believe the same goes for the 305s, at this price point you don't get other powered speakers with amt tweeters (which i prefer), low distortion and more than enough power. Although my room is treated, so take that into consideration, and it's supposed to sound good only at my working seat position.

Other options like Focal Solo6s or Genelec 8030, eventough they have better directivity i feel they will sound smaller. You only need to be a bit further away from these Eves to hear them properly. Or you can put them vertically and seat closer to them (1m)

I'd only go to a pricier 3 way in the future, no need to use others in this price range. Eve's are really good sounding speakers, and i believe that's why Amir recommends it eventhough some measurements are less that ideal. Thanks for this review, it's close to what i expected from experience. Not perfect a perfect speaker but with some strong capabilities.

How recent models, do they still hiss/buzz?

I had them in 2016, good memories, good speakers for the price at that time (1800€/pair), I'd take them over the previous KH120A I had any time. Although they more or less had the annoying buzzing self-noise. Not a problem at 2 meters, but I wouldn't personally tolerate it any nearer. Support was great and answered things fast. Had to warranty swap my pair since they buzzed a lot (and I knew it was abnormal since my first demo B-stock pair was quieter, but I returned those also since they were quite beat up otherwise).
Win10, Lynx E22, s/w DSP+XO / Genelec 1237A AES / Yamaha P7000S / 2 x BMS 18N862 | OHH SNAP

amirm said:
This is a review, listening tests and measurements of the Eve Audio SC305 studio monitor (powered speaker). It is on kind loan from a member and costs US $999.
View attachment 232946
You may think this is an MTM configuration but it is not. It is actually a 3-way speaker with one of the woofers playing down low like a small sub. As such, there are three amplifiers. You can choose which woofer is playing the major role and which is acting like a "sub." The front volume control and lets you setup a handful of parameters. Kind of hard to navigate but does the job. The LED ring around it is "smart" and changes function based on what it is showing.

As you see, the ports are in the back. Even though this is a DSP speaker, it doesn't have digital input which is a bit of a shame.

Back to the controls, the LEDs flash when the input level is too high which is very useful. It lets you know when the ADC is being overloaded which can create nasty distortions. Most speakers have clipping indicator for the amp. That would be useful was well.

The grill in front of the tweeter is magnetic and can be removed and rotated. Company said it makes no difference so I left it in place although measurements may indicate you should remove it.

I was surprised to see the variations in different regions as the company data shows almost ruler flat response. Looking more carefully, their measurements are smoothed to just 1/6th octave which would have that effect. There is large directivity error when the tweeter kicks in around 3 kHz which I forgot to note on the graph. And we have a bit of bass boost. Maybe that was put in there to counteract the resonances around crossover region.

Digging into individual driver response using near-field measurements shows the reason behind some of the response errors:

We see two distinct port/cabinet resonances. Good news there is that the port is facing back so as long as you don't put it near a wall (or put some 4+ inch absorber there), it should not have a ton of impact. The two woofers and tweeter go after each other in the crossover region especially since their roll off is not very good to avoid driver resonances/break up.

There is a sinusoidal response in tweeter which also shows up in my anechoic measurements. I am wondering if the grill is causing that.

The peaks in 3 to 7 kHz may be tweeter or woofers still playing. Either way, like to see that gone or lowered.

Beam width is highly variable which is disappointing. This is likely due to interference between the dual driver and directivity mismatch with the tweeter:

Eve Audio SC305 Listening Tests
I listened to the SC305 in my near-field setup. Listening distance is about 1 meter/3 to 4 feet. If you sit this close and certainly closer, you can easily hear the sound source being shifted to the left between tweeter and woofer (wonder if I should have made this the acoustic center). The right woofer is playing the "sub" role and is essentially silent. So I suggest putting some distance between you and the speaker. Moving left and right at close distance does change tonality.

In this setup, I found the sound to be pretty good. It was only after I EQed the 3 kHz region that I realized it was a bit hot there, making female vocals to stand out more than they should. I could detect some distortion at very elevated levels in high frequencies. Then again, the overall dynamics are excellent with none of the fall of the cliff that you get with monitors in this size. Because the very low frequencies are separated, the main mid-woofer barely gets distorted and even then, you can only tell if you block the tweeter with your hand as I did. I really, really like this as nothing makes me unhappy with a speaker than it running out of power/excursion.

The one at 2.4 kHz is necessary although in short-term listening and depending on content, you may prefer otherwise. The one at 700 Hz seemed to make no effect due to its narrowness. I left it in there as I "thought" it reduced distortion in a hair. So really, you can listen without any filters or just the one. The variations in the graph are too fine to be very audible.

Conclusions
Nice to see some variation in design of powered speakers. Having the very low frequencies play in a sperate driver+amp, is a good idea. Having it then interfere with the other drivers higher up, isn't. I think the trade off is a positive one due to my sensitivity when it comes to distortion. To get 3-way monitor without this issue will cost you a lot more than SC305. Overall, this is a nice, compact speaker with good performance.

I am going to recommend Eve Audio SC305.

Any donations are much appreciated using: https://www.audiosciencereview.com/forum/index.php?threads/how-to-support-audio-science-review.8150/
Click to expand...


Here is my take on the EQ.

The following EQs are “anechoic” EQs to get the speaker right before room integration. If you able to implement these EQs you must add EQ at LF for room integration, that is usually not optional… see hints there: https://www.audiosciencereview.com/...helf-speaker-review.11144/page-26#post-800725

The raw data with corrected ER and PIR: 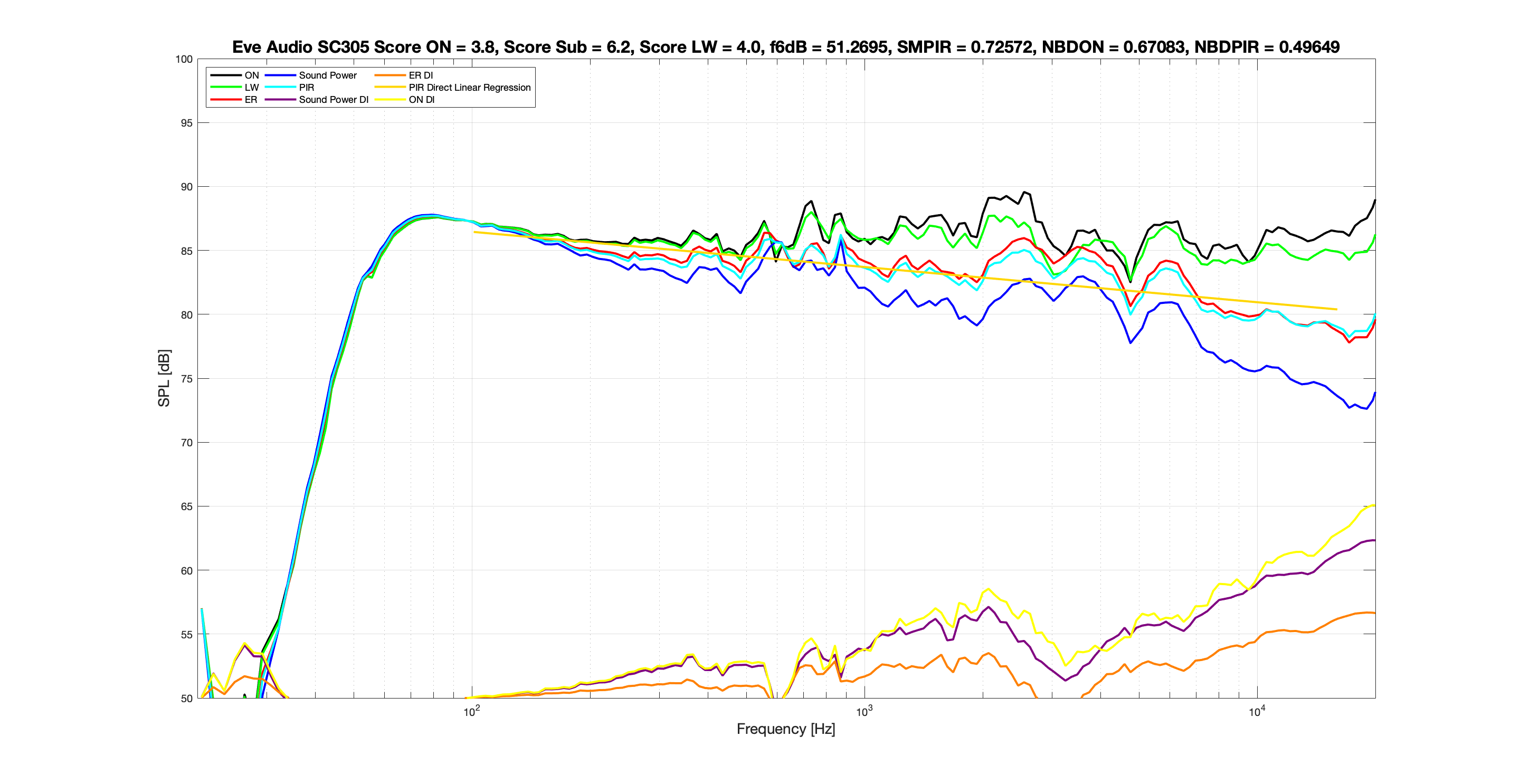 Better stay at tweeter height both Horizontally and Vertically 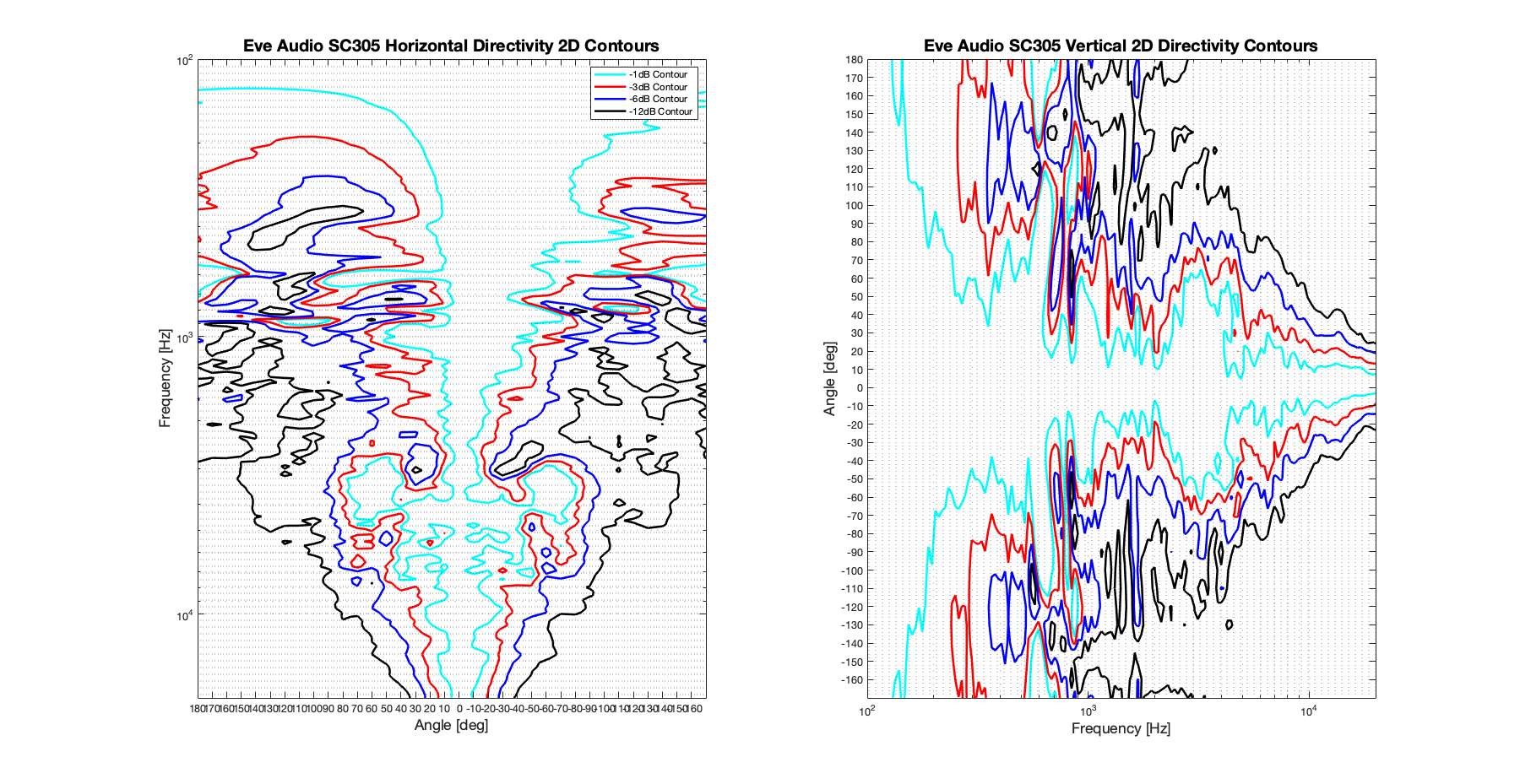 I have generated two EQs. The APO config files are attached. 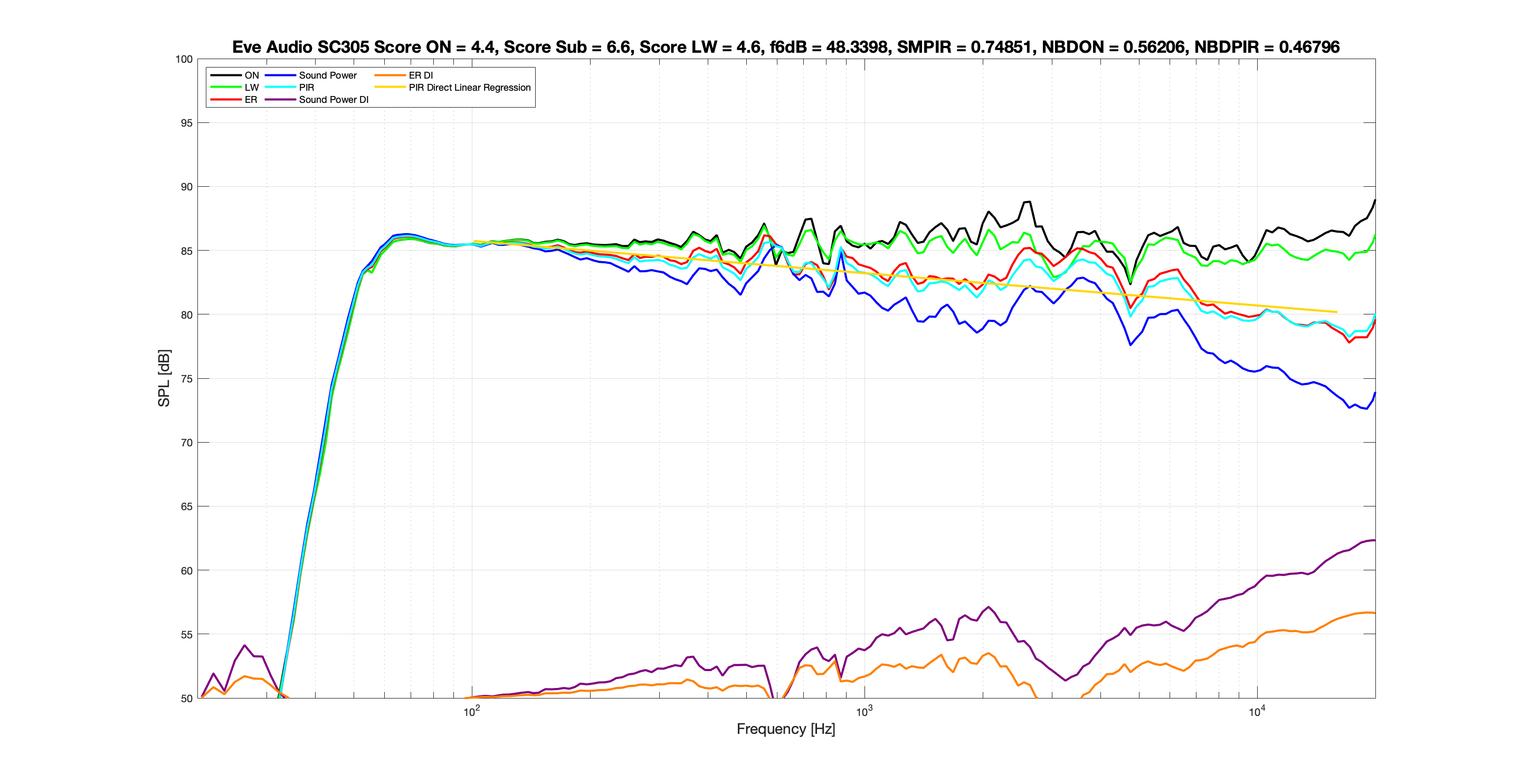 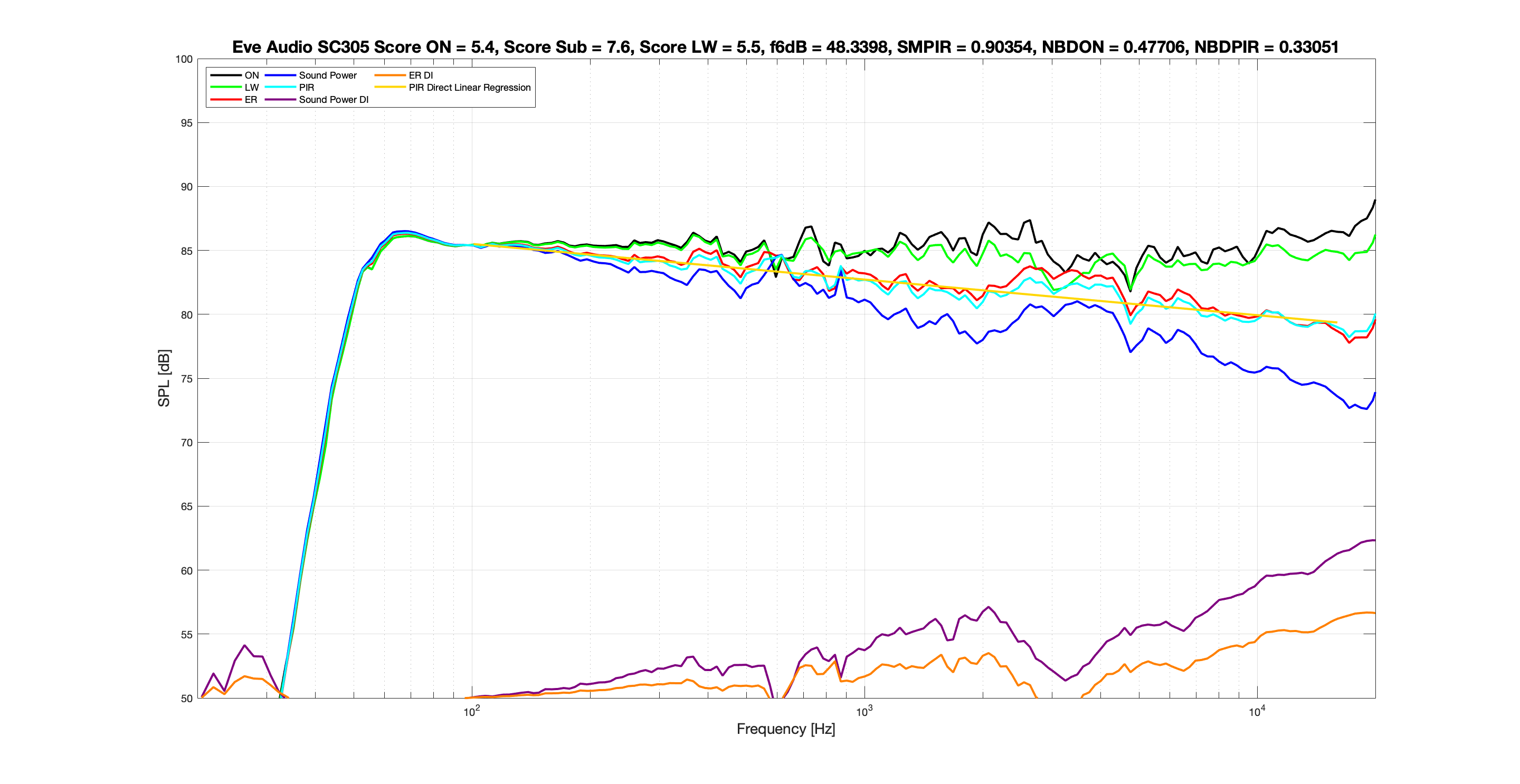 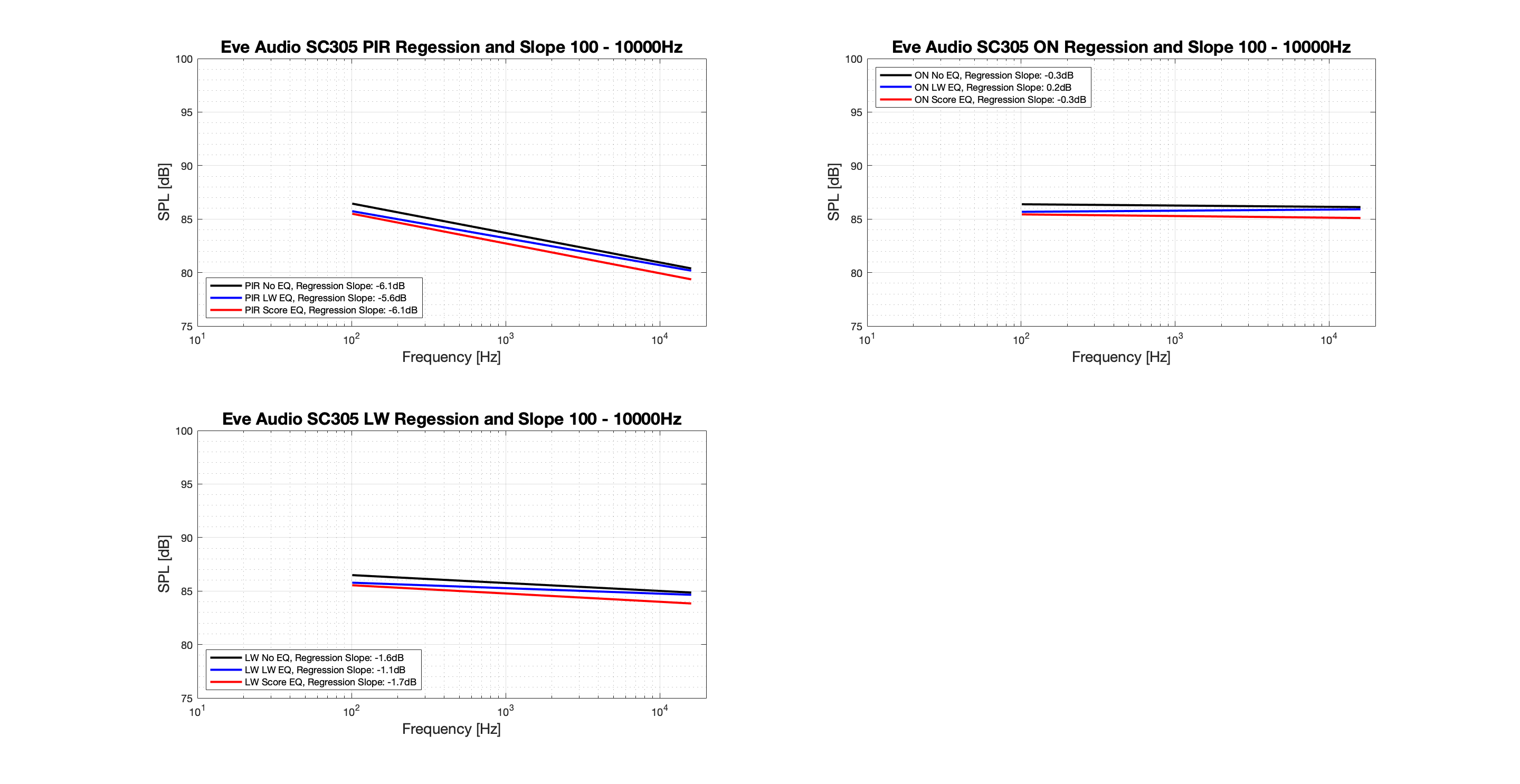 Radar no EQ vs EQ score
Some improvements 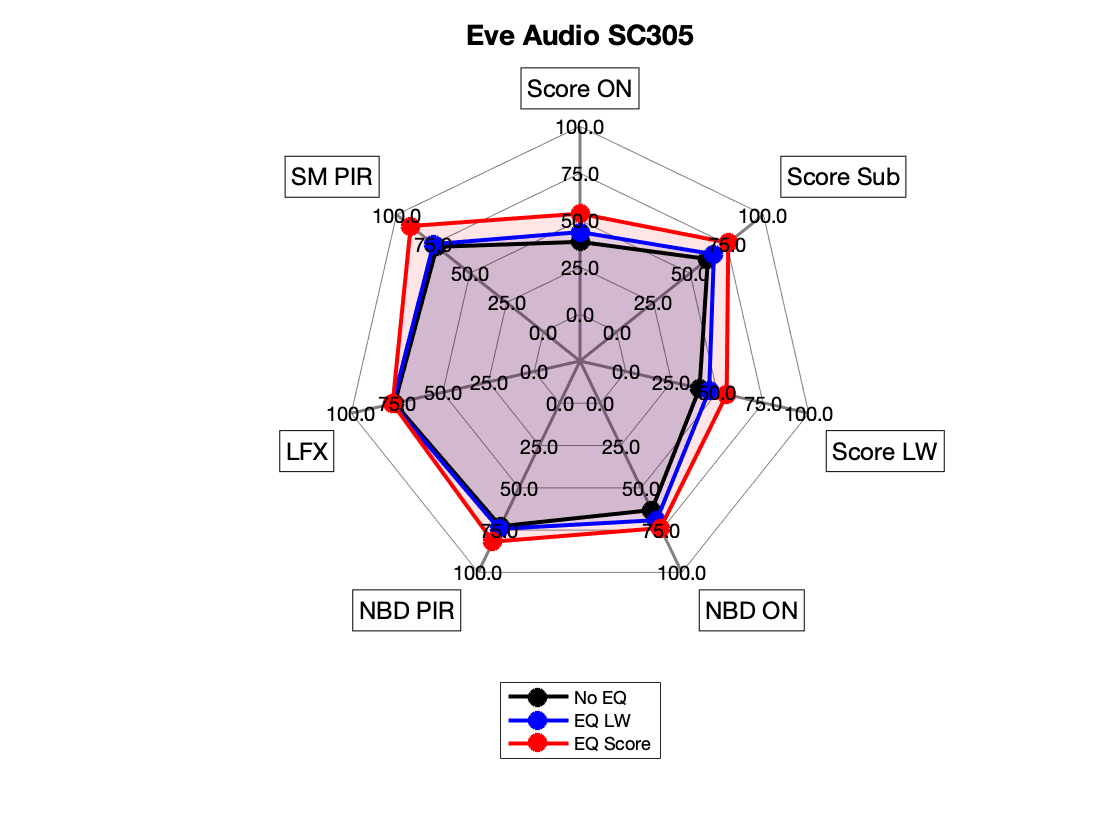 The rest of the plots is attached.

Process and analyze the NFS data yourself, including the Preference Score, Correct Spinorama, Directivity 2D and 3D live etc. :
Make sure you have the latest version
A Matlab - Octave Tool to calculate the correct Spinorama - CEA2034 from the NFS data
N

hege said:
How recent models, do they still hiss/buzz?

I had them in 2016, good memories, good speakers for the price at that time (1800€/pair), I'd take them over the previous KH120A I had any time. Although they more or less had the annoying buzzing self-noise. Not a problem at 2 meters, but I wouldn't personally tolerate it any nearer. Support was great and answered things fast. Had to warranty swap my pair since they buzzed a lot (and I knew it was abnormal since my first demo B-stock pair was quieter, but I returned those also since they were quite beat up otherwise).
Click to expand...

I can hear a little buzz if i put my ear right into the tweeter, but that might be and electrical issue here in my studio maybe? I didn't notice this at all i may say, in day to day use. I'm 1,2/1,5m away from them all day. I can't tell the exact manufacturing date either, maybe it was old stock when i bought them new almost two years ago!
H

@amirm Did you noticed this is a 2.5 way speaker? One woofer is used as a standard woofer and the other as mid-range, this is not represented properly in the measurements as those only show a 2 way measurement system.
C

heraldo_jones said:
this is not represented properly in the measurements as those only show a 2 way measurement system.
Click to expand...

What is a "two way measurement system"? Could you please explain this in more detail.

The Klippel NFS does not care, within certain limits, whether the DUT to be measured is a one, two or gazillion way system. The only thing that should be noted is that the measurement microphone reference point should be aligned with the listening axis indicated by the manufacturer.
Open baffle speaker pitfalls ++++ Cardioid speaker radiation via lateral slots - like D&D 8c ++++ Capacitor upgrade in crossover - Is it audible? ++++ Replace resistor by low-inductance resistor - Is it audible? ++++ Different Binding Posts - is it audible?
H

ctrl said:
What is a "two way measurement system"? Could you please explain this in more detail.

The Klippel NFS does not care, within certain limits, whether the DUT to be measured is a one, two or gazillion way system. The only thing that should be noted is that the measurement microphone reference point should be aligned with the listening axis indicated by the manufacturer.
Click to expand...

It does show woofer, midwoofer, port, and tweeter. Check the image again. Red line is woofer, blue line is mid woofer, brown line is port, and green line is tweeter. 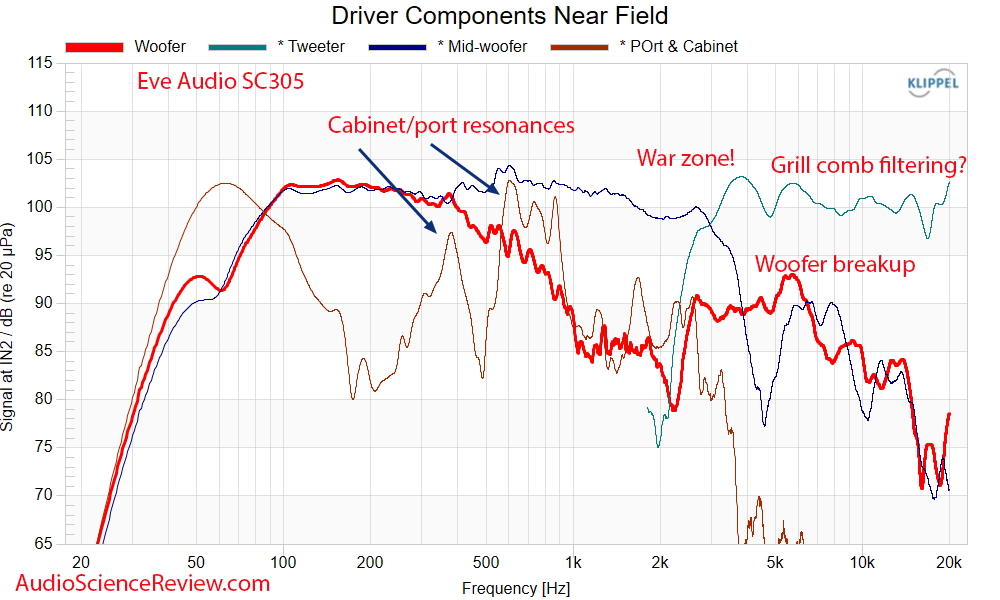 These are one of those days when I think I should check my eyes xD
You must log in or register to reply here.