This is a review and detailed measurements of the Carver Raven 350 tube monoblock amplifier. It is on kind loan from a member and (I think) costs US $4,750. 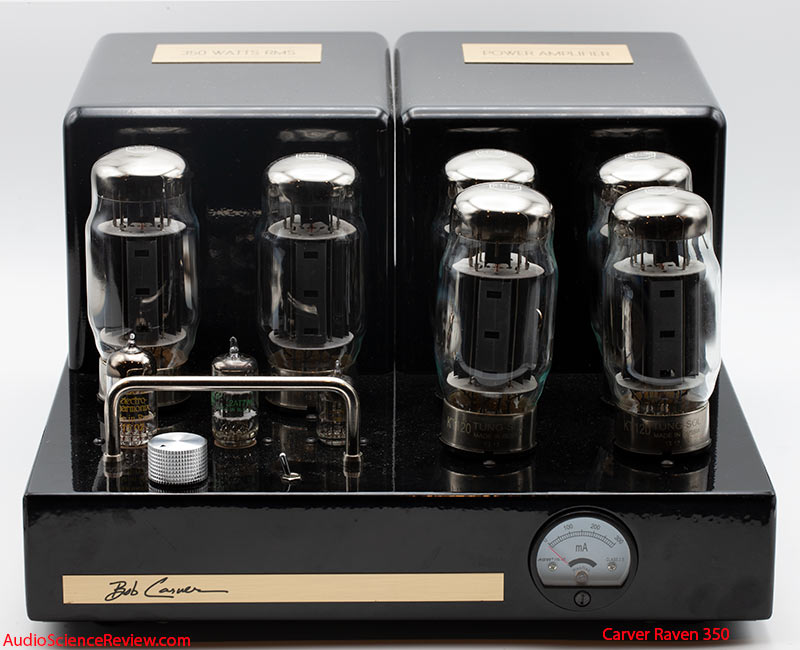 The 350 is not a bad looking amp. It has the same "orange peel" paint job of the previous Carver 275 amplifier I reviewed. At 42 pounds, the unit is pretty heavy. With all the weight in the back, the front handle is kind of useless when it comes to lifting it. 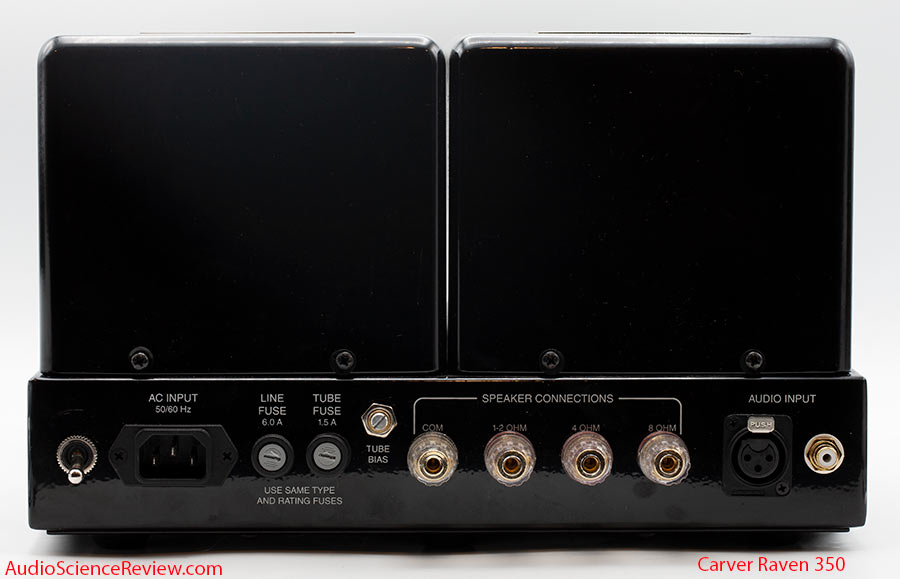 There is an XLR input but I believe it is for convenience and performs the same as RCA. I measured the DC resistance of the 4 and 8 ohm terminals (after the measurements) and realized they are both the same! Here I was switching back and forth between them. Anyway, measured DC resistance is 0.47 ohm. The 1-2 ohm tap has a lower DC resistance of about 0.3 ohm.

Unlike the 275 amplifier, the fuses did not blow and the amp survived my sweep tests. Bias is to be set at "80" on the front dial and that was the case when I powered on the unit.

There is a gain control but you are advised to set it to max which is what I did for testing.

There is a flip switch in the front which changes the amount of feedback. I tested the amp in both settings.

Here are the specs: 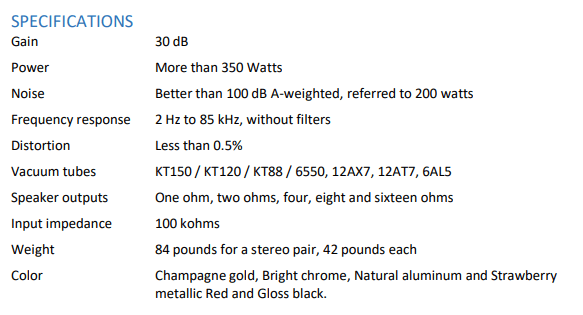 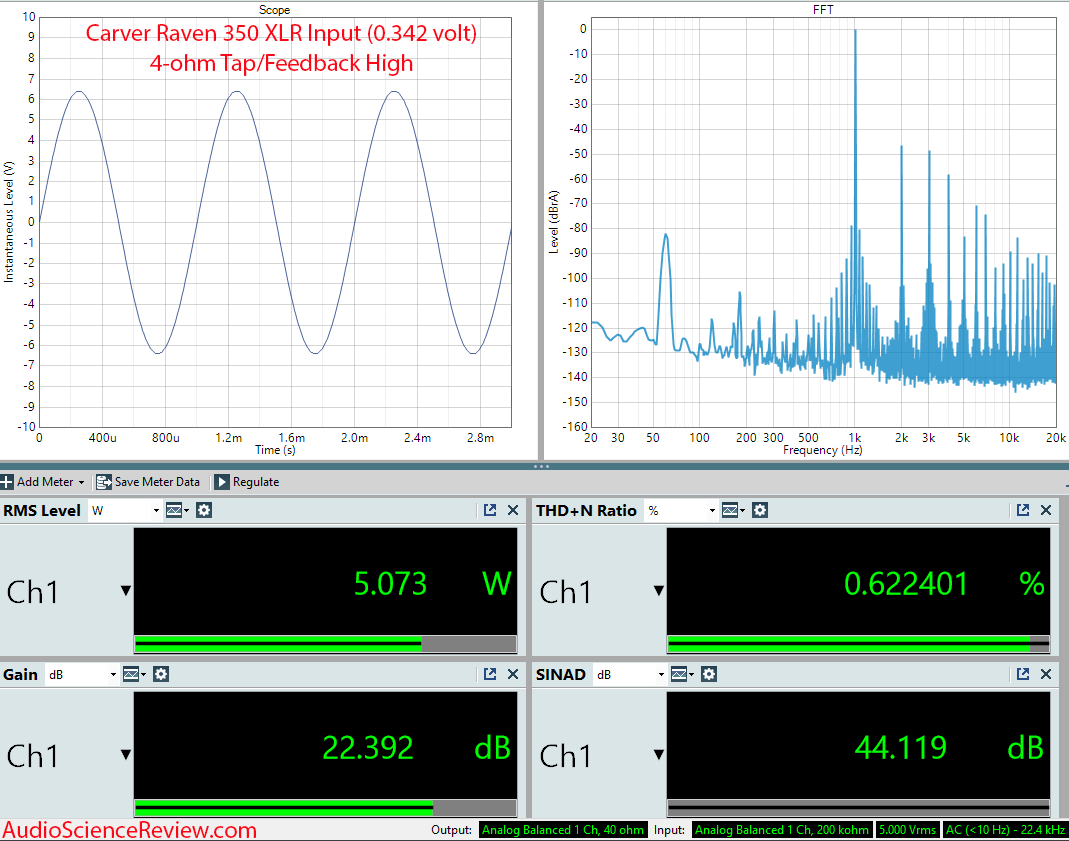 There is copious amount of distortion causing SINAD to be dominated by it. At 44.1, it ranks as the second worst amplifier ever tested:

It even performed worse than the Carver 275 which had a SINAD of 46. Switching to lower feedback doesn't make things that much worse: 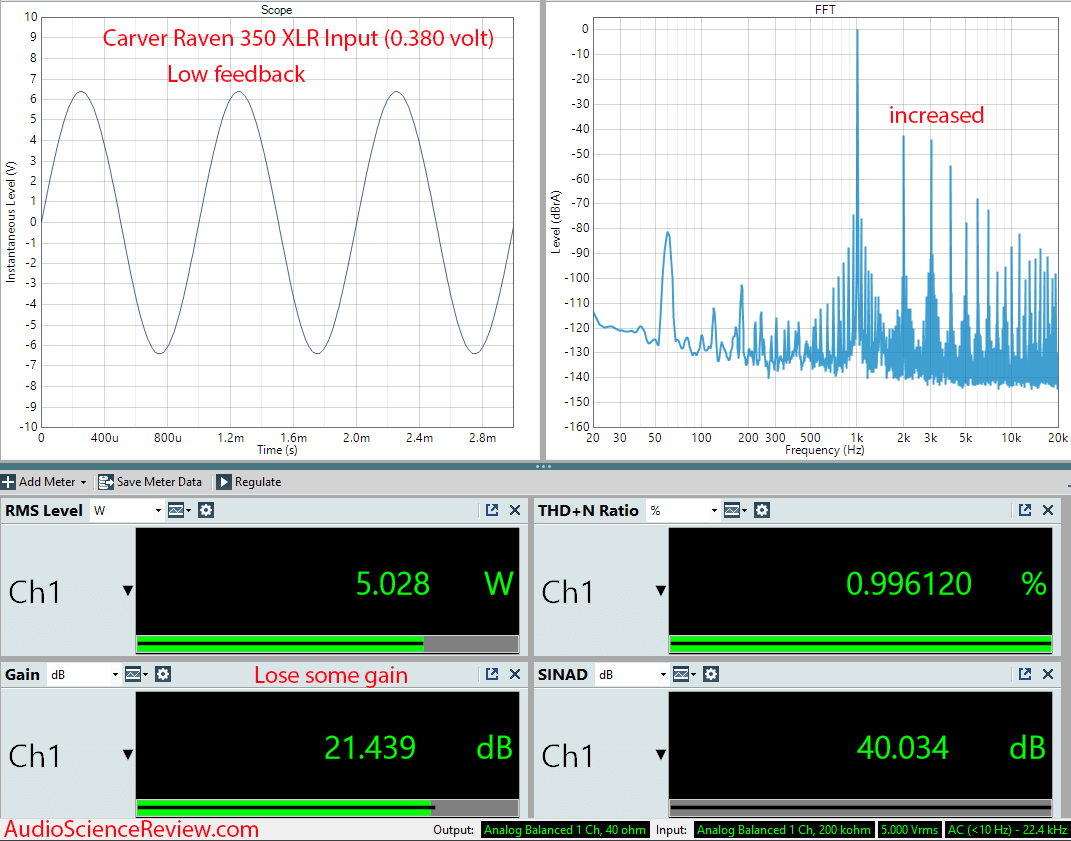 Note that gain is reduced and therefore, volume will be different. This makes AB testing tricky. Here is a more detailed FFT showing the small difference between low and high feedback: 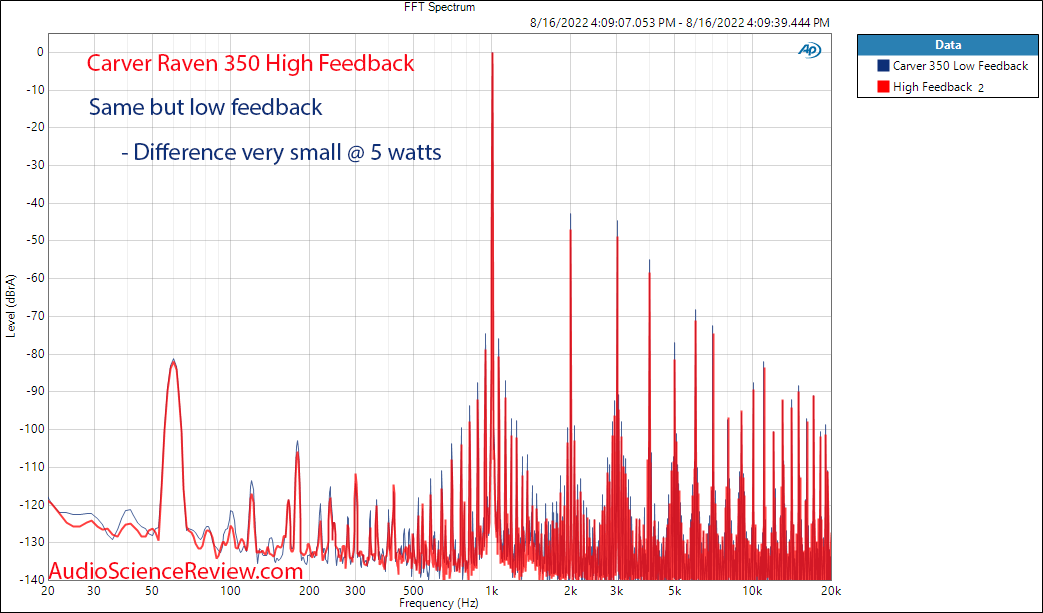 Notice how distortion is made up of both 2nd and 3rd harmonics so you can't make the argument that it is "2nd harmonic goodness."

As noted, RCA performance is the same as XLR: 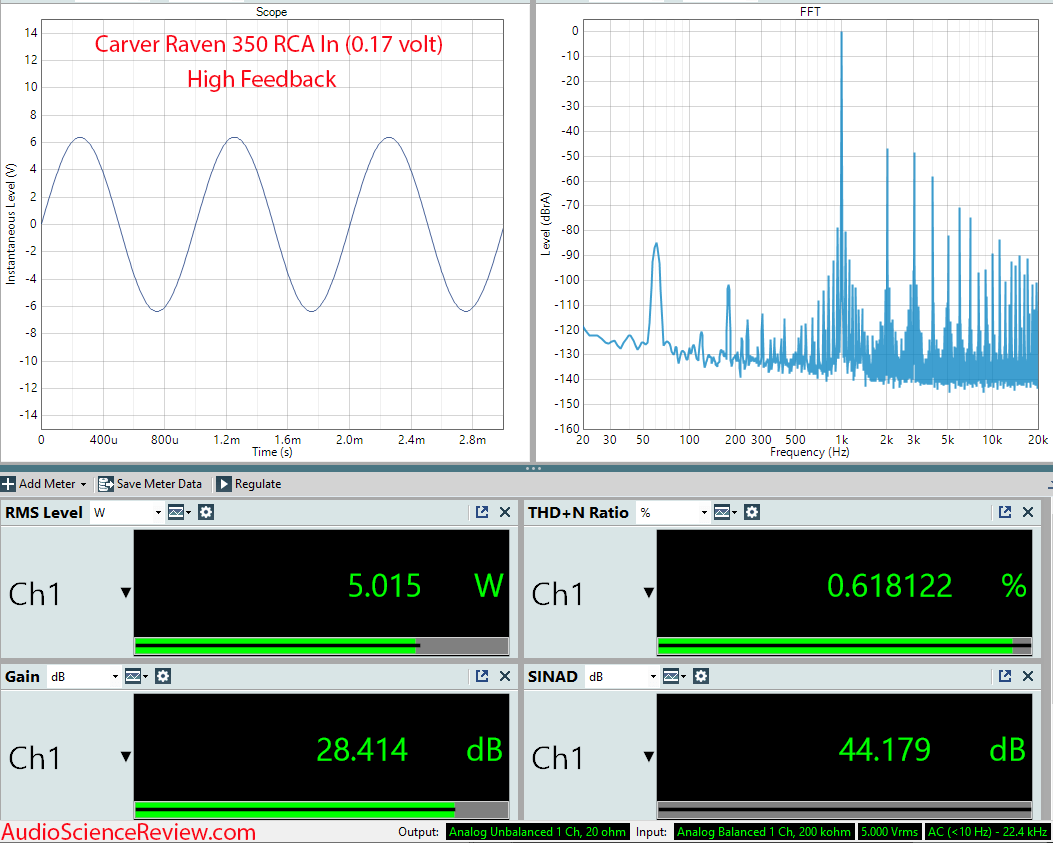 Power supply 60 Hz noise in both cases causes severe intermodulation higher up in frequency. No amount of grounding impacted that so it is endemic tot he design.

Noise performance is decent for type of amp it is: 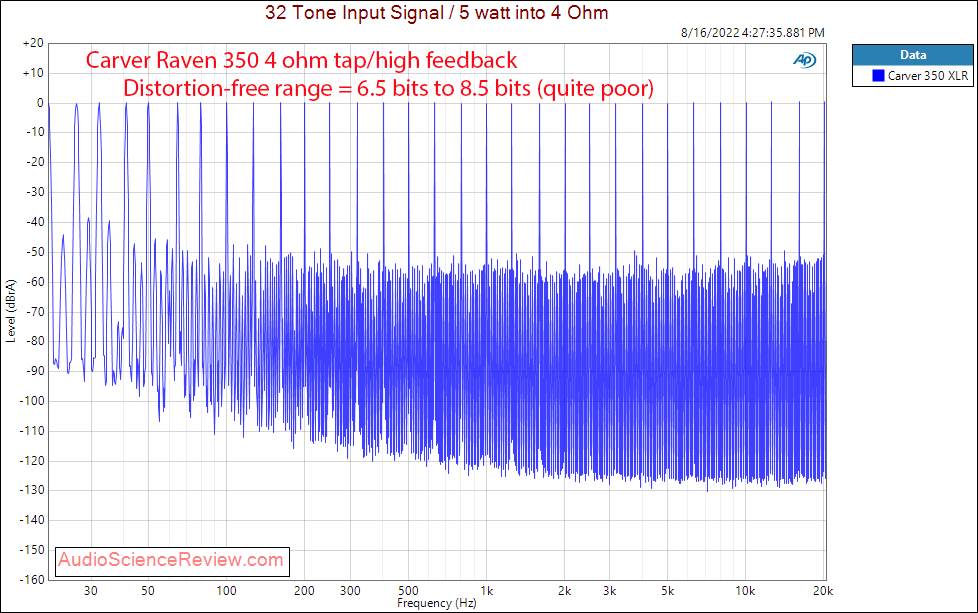 I don't know how anyone could hear more "detail" with such an amp where so much of the music signal will get lost in the distortion "grass."

Frequency response should be flat but it is not: 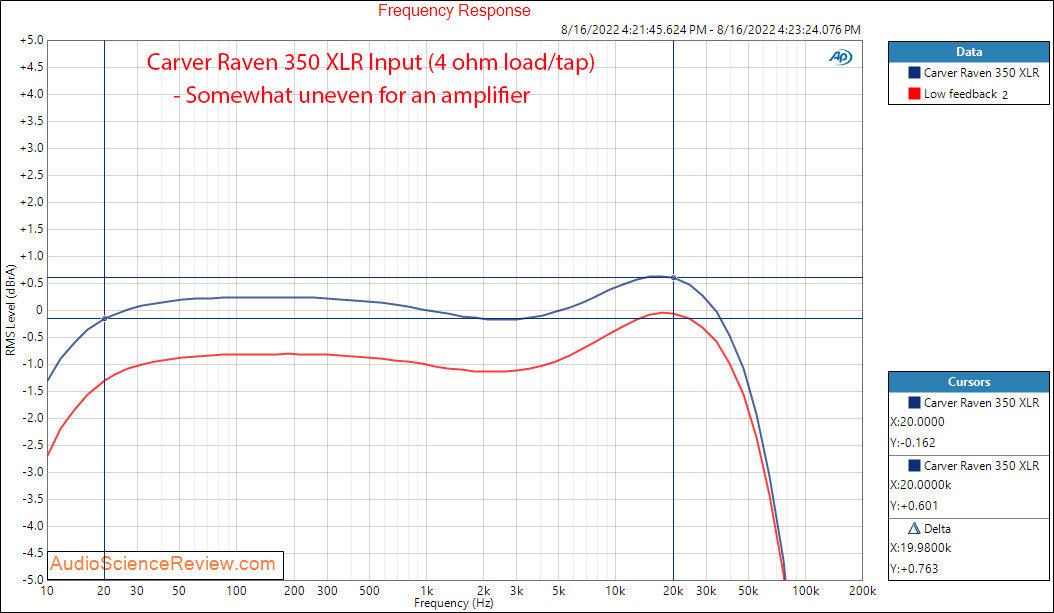 It naturally will have load dependency due to output impedance.

Let's see the power situation as we had serious shortfall in the 275 amp: 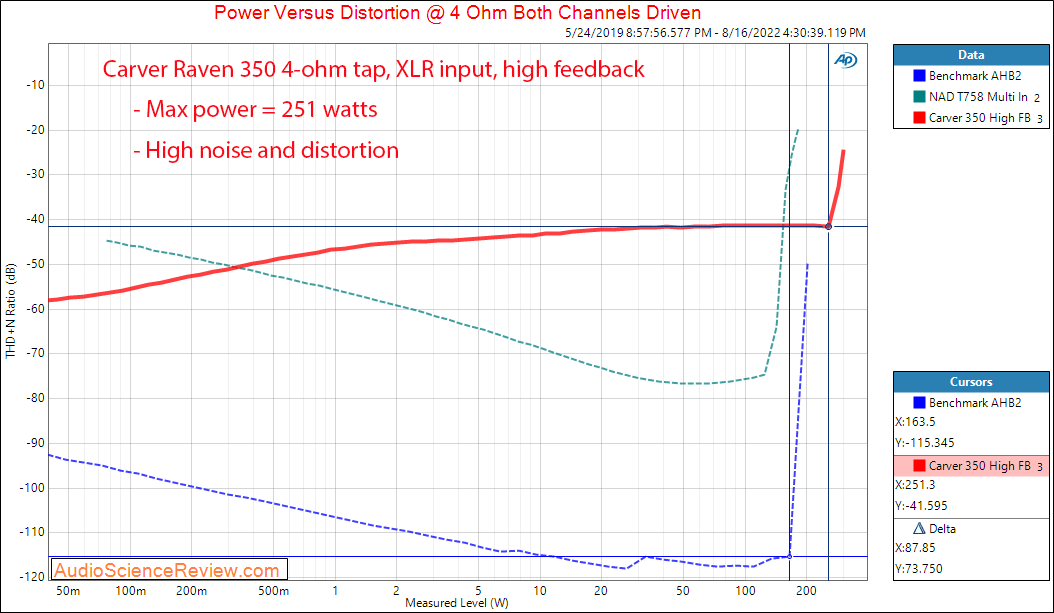 We don't meet the spec there but come closer with 8 ohm: 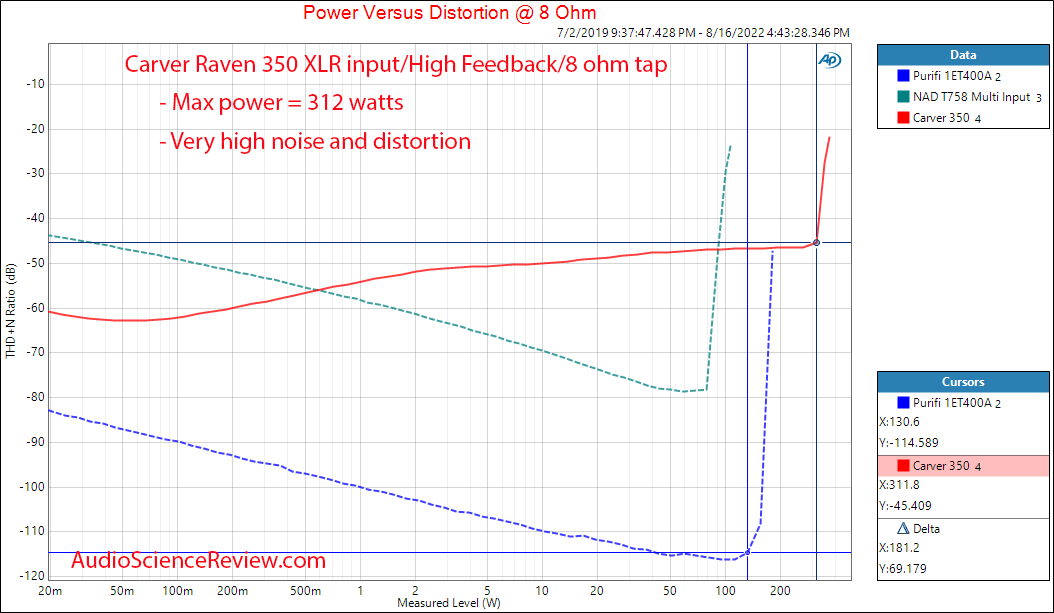 Back to 4 ohm, here is our 1% THD (double the company spec) max and burst power:

We seem to get the same shortfall. There is momentary reservoir though allowing the peak output to shoot way up. This was not always consistent though. 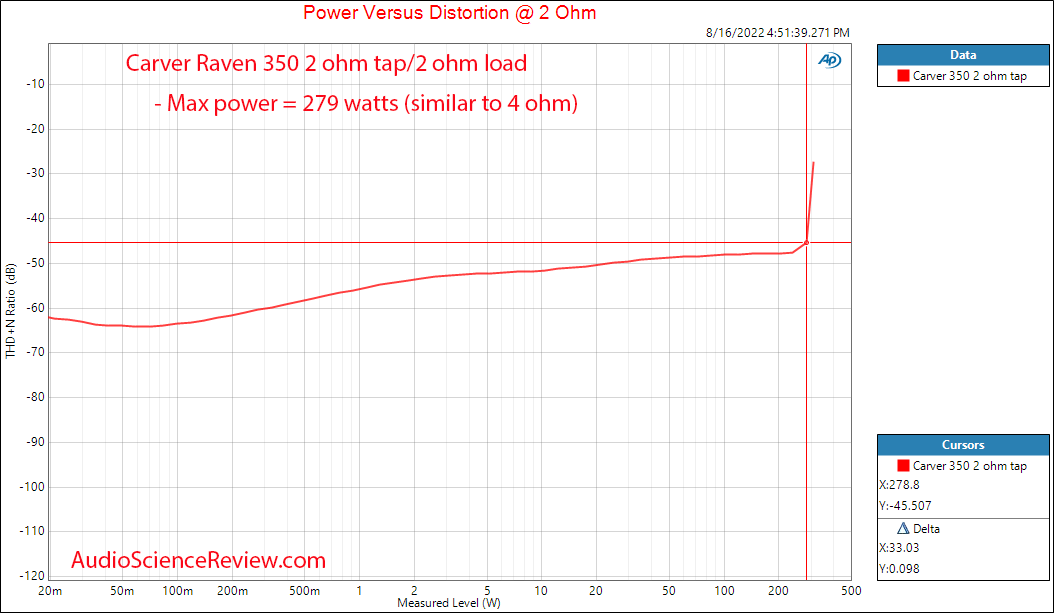 You are still current limited so no more power.

Changing the test frequency gives us the following power curves: 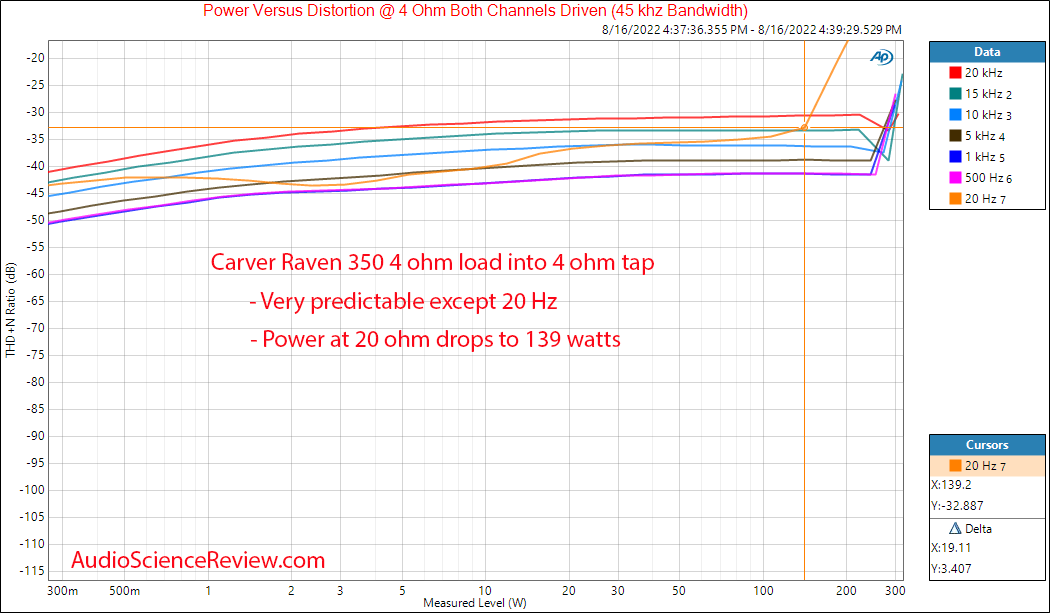 There is some instability at 20 Hz and fairly significant power drop. This points to power supply not having enough capacity as the lower frequency taxes it for longer period. Some drop occurs in every amplifier by the way so it is a matter of how much.

Finally, the amplifier warms up quickly and is pretty stable: 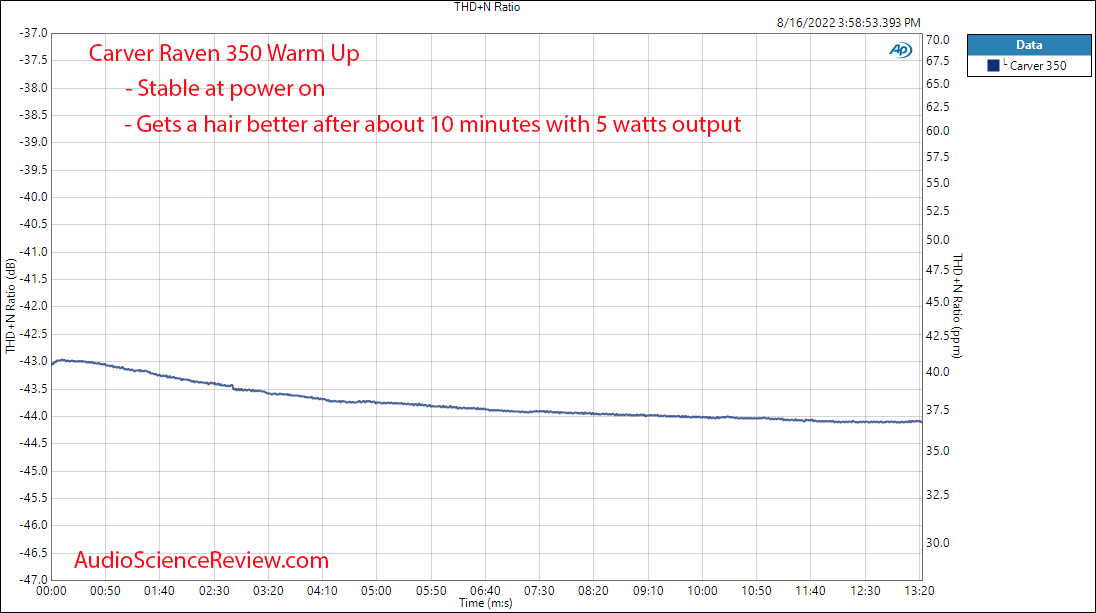 Testing occurred after this warm up.

Conclusions
What an upside down the world of audio is. Folks want to pay so much more to get dirtier sound. You want dirty? The Carver 350 gives it to you. Even at 5 watts there is copious amount of harmonic distortion. Power supply mixes with that at such high level that it creates its own spread of distortion. A video must come with these amps that hypnotizes you into thinking you are getting great sound....

Well if one is looking for harmonic distortion, this is the one!

Good to see the measurements on this Amir, thanks... basically my first reaction;

At that level of distortion, anybody might be able to hear it anytime. For once a product that sounds different...

Big OOOOOOOOOOOOOOOF almost the worst ever tested!
Amazing that people will spend huge sums of money to have such terrible performance.
Maybe it "sounds smooth", since literally all detail is lost?

Back in the 80's, reviewer/guru Martin Colloms raved about similar US 'high end' valve amps from ARC, Quicksilver, VTL, C-J and so on and made all manner of excuses about measurements not correlating with what he and the listening panel heard. Indeed, it became a thing that all the best measuring amps tested in 1980's 'Choice' books more often than not, did badly in the listening tests, as the lack of added character usually made the sound leaner and with less 'depth' perspective (added compression in the favoured ones?) and most recommended or best buy amps were somewhere in the upper 60's 70's for estimated sinad. In the UK, this reviewer became 'important' as he had interests all over as consultant, designer and so on and people took notice of his reviews.

I'd suggest this Carver box is exactly how it's supposed to be, giving a wonderful sonic character.

Did you 'listen to it' Amir ('cos 'we' don't listen to test tones, do we?). Sorry for that, but that's going to be the audiophile response to this review... Would be great if this distortion 'grass' can definitely be heard as against a pile of cheaper alternatives that don't have it...
Tear down these walls, Cut the ties that hold me, Crying out at the top of my voice, Tell me now if you can hear me...............

DSJR said:
I'd suggest this Carver box is exactly how it's supposed to be, giving a wonderful sonic character.
Click to expand...

I'm sure your correct and it's meant to be this way... but why would one want a baked in sonic character that can never be altered?

If people are looking to play with distortion and noise levels, give this a whirl;

Tube Tone and Warmth in an easy, smooth way. Make your bass drums, guitars and vocals stick out.

www.plugin-alliance.com
Much cheaper than this amp... or even a free one;

This plugin is now distributed by DDMF. It can be downloaded for free at: The following work is the result of my bachelor thesis, titeled “Real-time implementation of a tube preamplifier in o…

I don't think the 'handle' is for lifting- it's there as a finger guard to not get burnt by the tubes.

I uncovered the fake output taps (strapped together) previously.

I really feel sorry for the poor member who paid USD$4750 for this thing. It isn't high fidelity equipment. And I figure, he must have bought two!
Last edited: Aug 18, 2022
Stealing AdamG247's legendary quote: "I think we can almost all agree that this thread is Dead. Living on life support, and I’m pulling the plug."
OP

restorer-john said:
And I figure, he must have bought two!
Click to expand...

I'm so used to tube amps being gutless sissys had to double take at the power figures. I like the aesthetic of this amp too. Shame it measures like a p.a amp rather than hifi. Thanks to the member who sent this in.
G

Does anyone have any JAN tubes that they can send to Amir? You would imagine that the old tubes intended for use in test equipment will be better than todays modern tubes intended only for “audiophiles”

The lack of the ground is a deal breaker even though I do have a tube amp I enjoy listening too, even though it’s not transparent.

Genuinely don't understand this. Obviously it measures terribly ... is it meant to be like this, is it a design decision? Surely for $5k there is some competence and intent in the design and build ... baffled.

Is this analogous to cars that look cool and have massive engines that make an amazing noise but handle like sh#t (and no-one cares because they want the look and noise)?
Loving music: trying to train my brain to ignore the other stuff. Mastering makes more of a difference than anything ... but how do you check that!
2.0 System: Sources (Pro-ject Debut => iFi Zen Phono) and WiiM Mini into balanced miniDSP Flex => Topping L50 => Sennheiser HD560S (EQd)
L50 balanced passthrough to repaired Topping PA5 => Fyne Audio F301 (Sub comes next)
A

It’s as if someone made a cinema amplifier from the 60s or 50s.

This belongs in a museum or some sort of exhibition.

Gotta love that tube sound. So musical. You need to use the special listening aid with this though 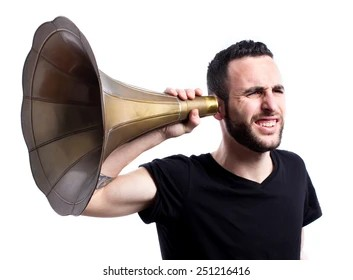 Maybe we need a fundraiser to make him 'whole' again. Kidding.
Stealing AdamG247's legendary quote: "I think we can almost all agree that this thread is Dead. Living on life support, and I’m pulling the plug."

It's a shocker. It's not even HiFi

restorer-john said:
I don't think the 'handle' is for lifting- it's there as a finger guard to not get burnt by the tubes.

I uncovered the fake output taps (strapped together) previously.

I really feel sorry for the poor member who paid USD$4750 for this thing. It isn't high fidelity equipment. And I figure, he must have bought two!
Click to expand...

He can get his money back ??

It would be foolish to dismiss this as a product from a designer that isn't competent. Bob Carver was the designer who took down Sterophile with his challenge mentioned in the link below.

Would anyone notice the fact that this has measurably poor performance in a DBT?
A

Funnyjelo said:
Gotta love that tube sound. So musical. You need to use the special listening aid with this though
View attachment 225122
Click to expand...

Ironically this will get significantly louder than any Topping amplifier.

Shadrach said:
It would be foolish to dismiss this as a product from a designer that isn't competent. Bob Carver was the designer who took down Sterophile with his challenge mentioned in the link below.

Would anyone notice the fact that this has measurably poor performace in a DBT?
Click to expand...

JeremyFife said:
Genuinely don't understand this. Obviously it measures terribly ... is it meant to be like this, is it a design decision?
Click to expand...

Hard to say. The tubes themselves make a big difference in sound quality. Companies like GE and Raytheon used to make tubes for industrial applications like oscilloscopes and you wanted maximum quality. Nowadays, nearly all of the tubes are made in Russia and China

I had a McIntosh Mc2102 (sold) and currently have an SFS-80 running Milspec (JAN = Joint Army Navy) tubes. They aren’t state of the art but with those tubes it’s definitely on par with my JBL SA600 to my ears. I’d be shocked if the SA600 did worse than these . @amirm

You can see Stereophile’s measurements of the MC275 here 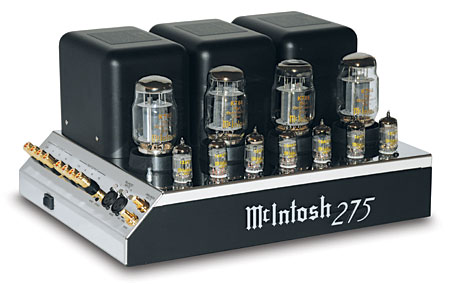 Bascom King measured the SFS-40 here which ran 7 dB of negative feedback. He is the designer of the BHK PS Audio amps as well.


http://www.elektronikjk.com/elektroakustyka/wzmacniacze/wzmacniacze_lampowe/Sonic_Frontiers_SFL-1_Line_Preamp_and_SFS-40_AMP.pdf
You must log in or register to reply here.