This is a review, listening tests and measurements of the CHORD Hugo M-scaler upsampling digital transport. It is on kind loan from a member and costs US $5,295 (some show it as $5,650).

We have the usual lightshow of buttons as other CHORD digital products but here, due to less overloading of the buttons, it is not hard to navigate. Still, it is annoying to have to keep looking up the color coding in the manual until you memorize them. Here is the back panel:

The unit accepts digital audio over either USB or S/PDIF inputs (coax and optical). Very oddly for a device in this class, a large PC laptop type power supply is provided, needlessly causing anxiety for most of their customers buying this tweak. An internal power supply should have been provided. Output is in the form of S/PDIF again or dual BNC outputs which is proprietary to CHORD. Fortunately the member kindly provided a Hugo 2 and all the necessary (high-end Nordost) cabling to make the system work.

If you are unfamiliar with the marketing of this product, it takes an input and upsamples it to higher rate using incredibly high number of taps. High taps allows sharper transition from pass-band to ultrasonic. Company claims that one needs huge number of taps for better fidelity, literally going to millions of them. This has a side-effect of creating fair amount of latency so there is a "video" mode where if it detects 48 kHz sampling, it will shut off the upsampling (or lowers its taps?). While 48 kHz is a common sampling rate for video, many other rates are used so this is not a full fix. Fortunately a "bypass" mode is also provided which basically disables the filter. However, it still lowers the levels to make it match the level when upsampling is used (needed for headroom as to avoid overflow). Company rightly realizes that if the volume is higher in bypass mode, customer may think that sounds better and reject the whole notion of the unit. If so, I wonder then why company doesn't believe in going the next step and providing level matched, controlled blind test to show the efficacy of the unit.

Back to upsampling, the rates provided are 2X, 4X and 16X with the latter needing dual BNC connection at 768 kHz.

CHORD M-Scaler Measurements
My first test was to examine the quality of the Coax output with respect to jitter. Results were disappointing and depended in how you output bits to the unit. Let's start with USB connection: 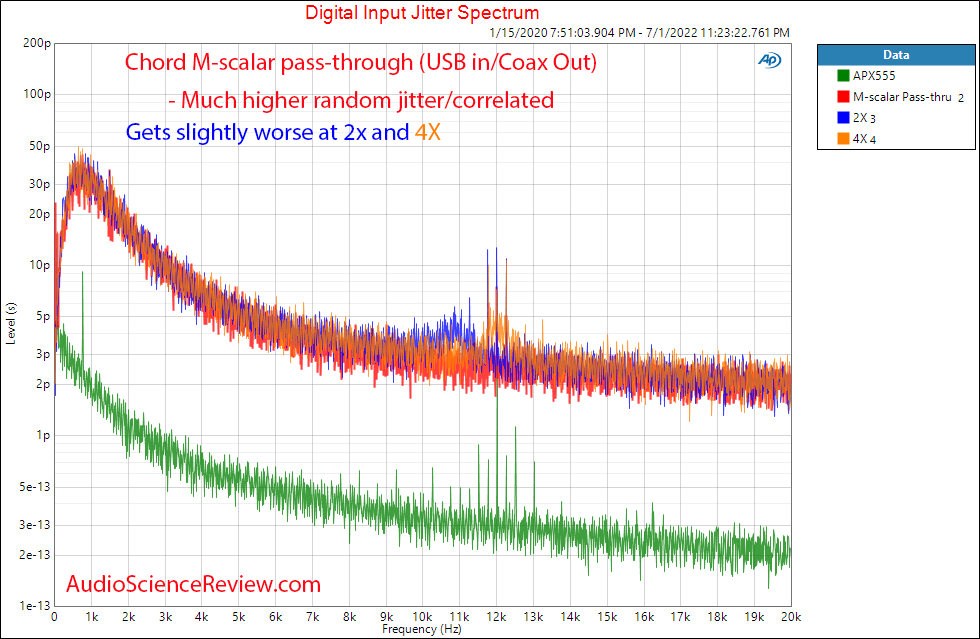 The green line is the Audio Precision analyzer measuring jitter spectrum of its own Coax signal. The red, green and orange lines are what we get when we send the same digital signal through M-Scaler, i.e. USB In/Coax out to the analyzer. We see a large increase (in relative terms) of the baseline noise indicating random jitter. The correlated spikes are elevated much higher as well.

Turns out the above was the "good case." Here is the bad case when we use Audio Precision's coax output to feed the M-scaler: 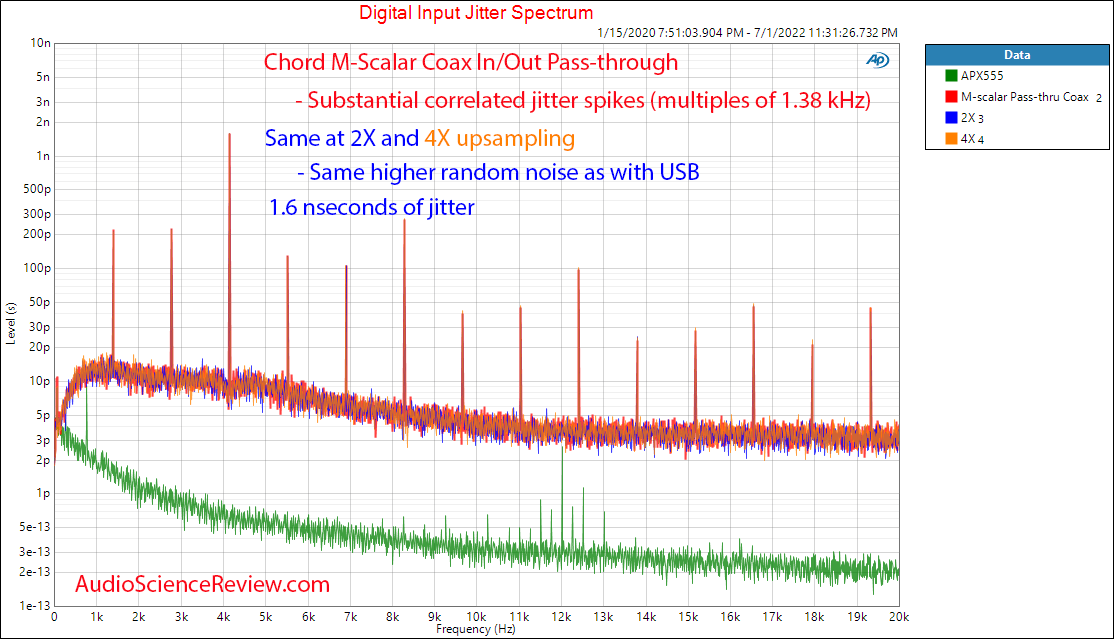 Good grief. What is going on here? Not only do we have the same baseline (higher) noise floor but now have distinct deterministic spikes coming out of the unit. I captured the AP and M-Scaler's computed jitter level and it is embarrassingly bad:

It is so bad that you can see the problem just looking at the waveform of jitter:

On the left we see AP analyzer's benign, very low level noise. On the right we see clearly, somewhat sinusoidal of M-scaler. I have tested $100 digital bridges that far outperform the M-Scalar on this front! As a way of reference, 500 picosecond/0.5 nanosecond is enough jitter to equal one bit of 16 bit digital audio sample. M-Scalar is outputting 8X that amount!

Fortunately any half-respecting DAC will filter this and not let it in the output but still, what is the claim to fame of M-scaler if it is not precision of its digital transformation? Let's save our frustration for other test results.

Next I connected a Topping D70S to the analyzer and captured its output by itself: 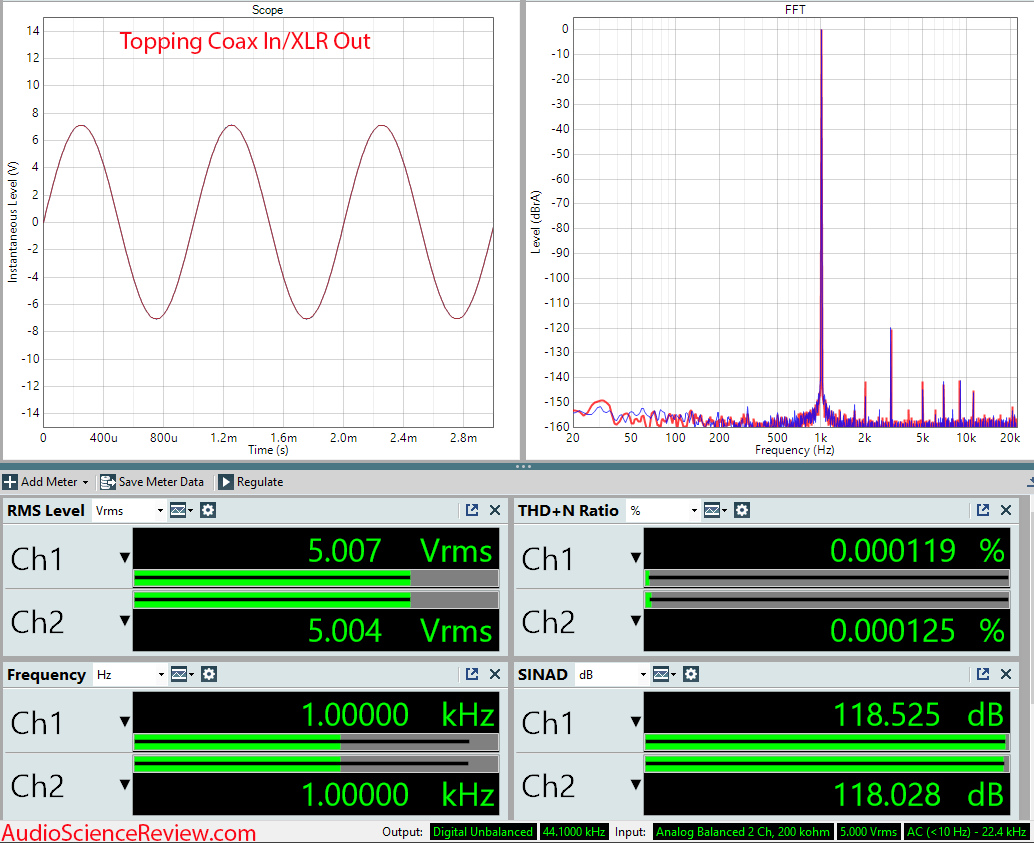 We see the great performance that we expect from this DAC. Now let's put the M-scaler in the loop: 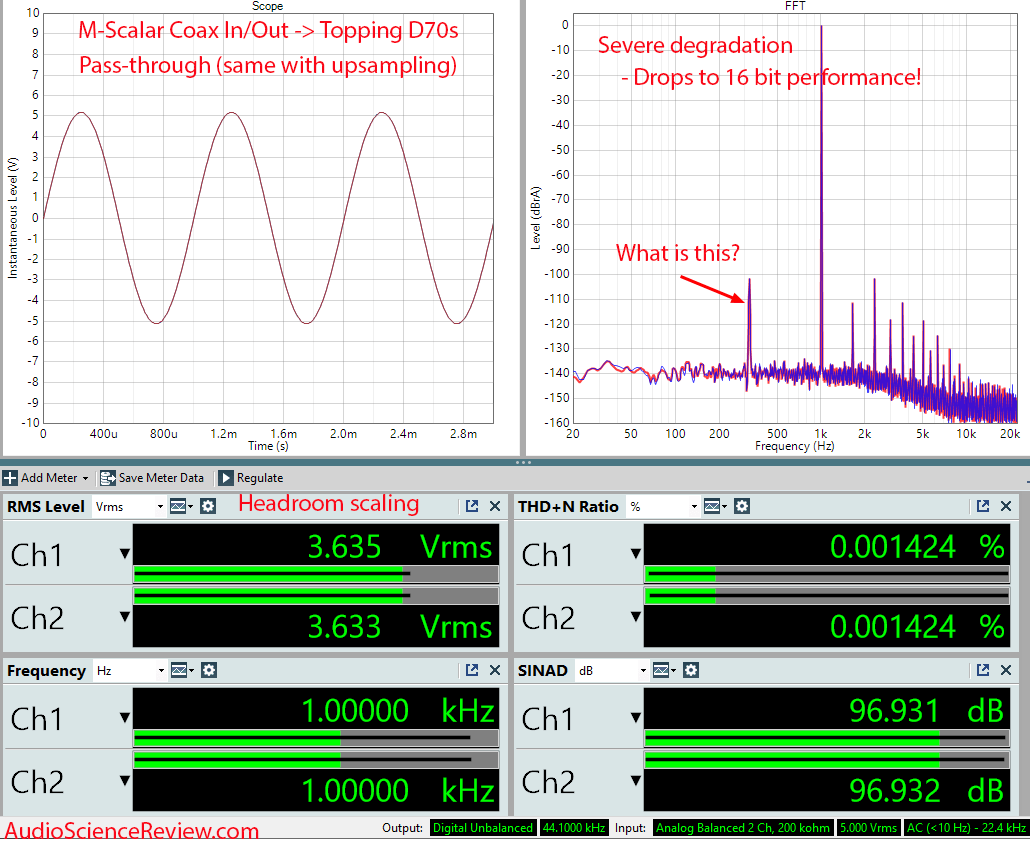 What the heck happened here? Even in pass through mode performance of D70s is heavily degraded. We have spikes at oddball frequencies which I can't explain. I see reviewers with company blessing using M-scaler with third-party DACs. I would say be cautious, very cautious doing so.

Fortunately there was no problem using M-scaler with Hugo 2: 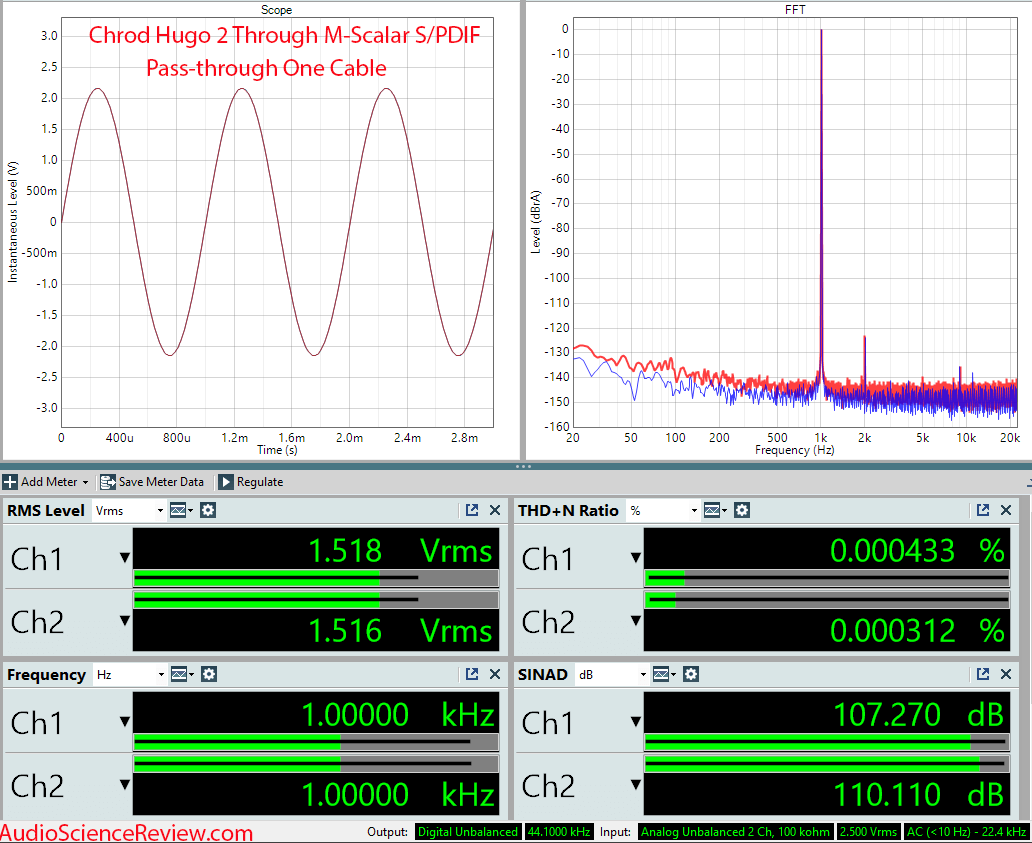 Then again there was no benefit to upscaling either: 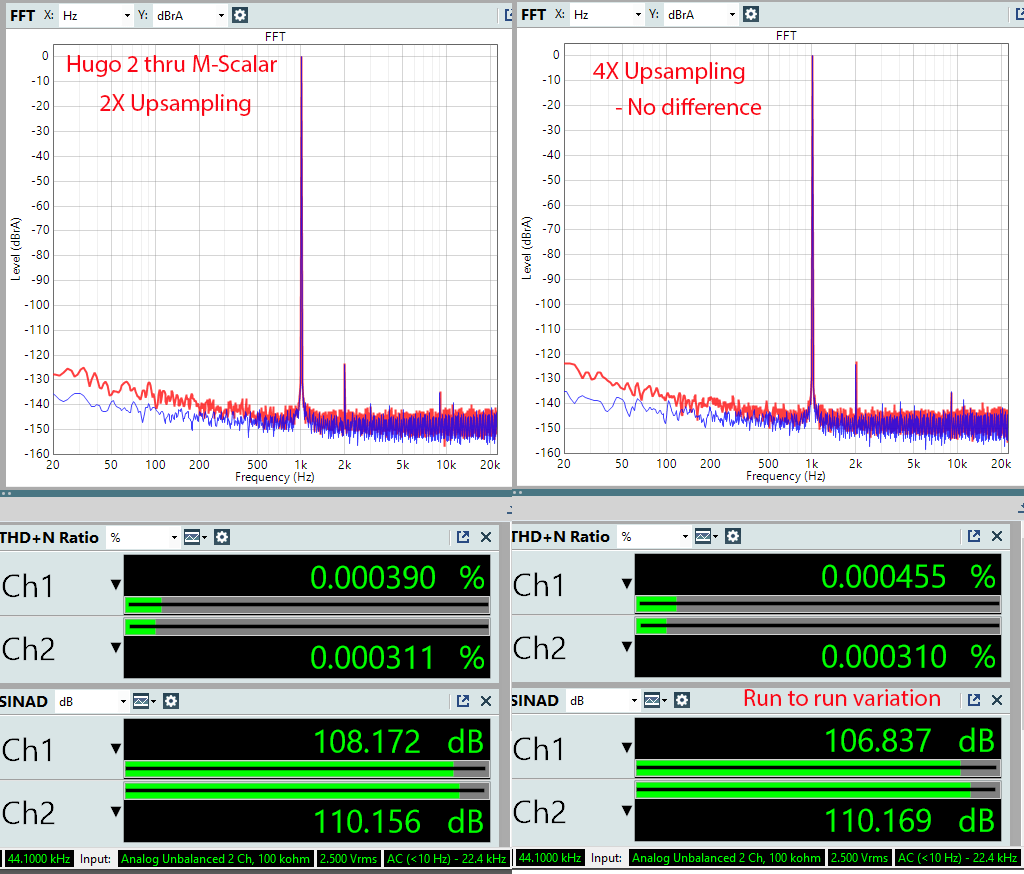 And here is the response with dual Coax: 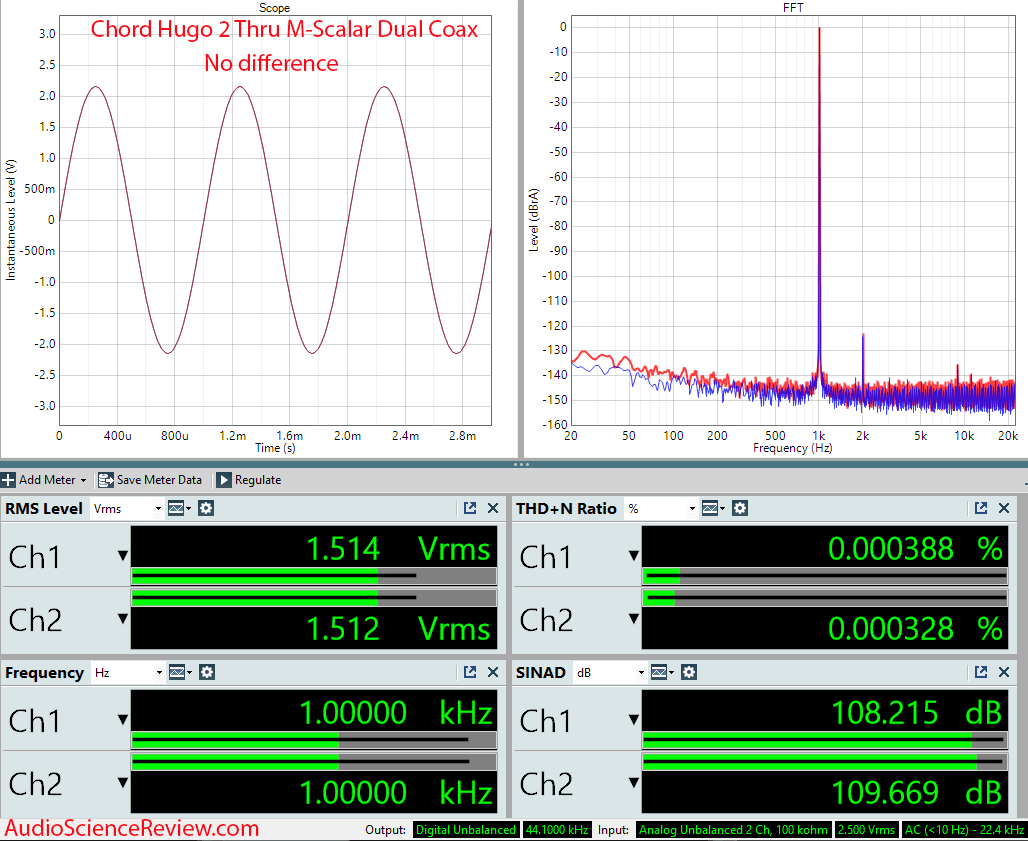 I should note that the Hugo 2 was running on battery for all of these tests per suggestion from the owner.

Let's go back to basics and see if the M-scaler is doing what it is supposed to be doing by running our filter test with the D70s: 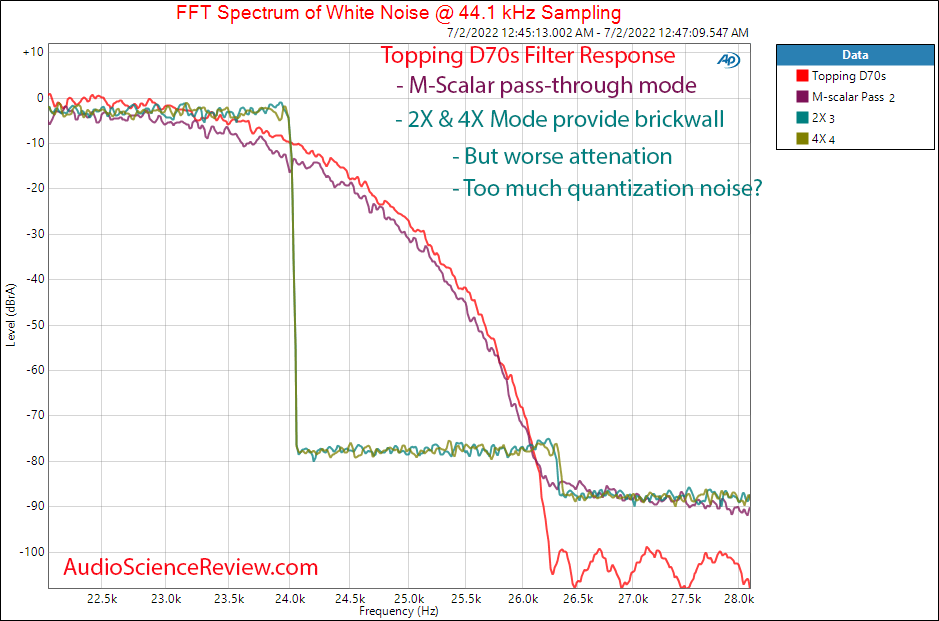 It is indeed. Both 2X and 4X modes provide an ultra sharp response. However they do so at the cost of higher noise floor/lower attenuation.

I ran a very high resolution frequency response test focusing on the end of the spectrum and results are basically the same in all modes: 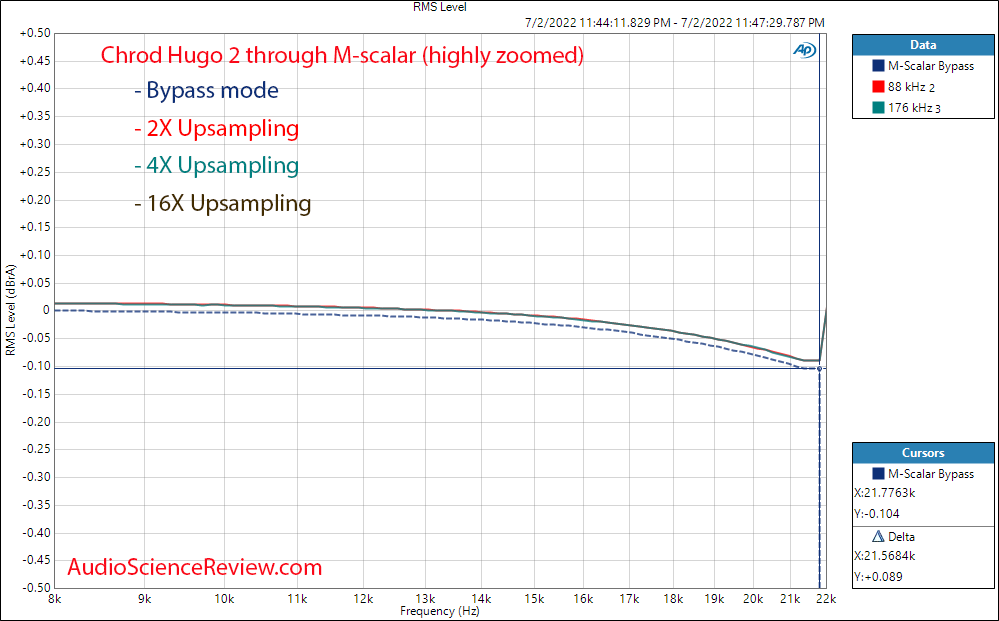 The bypass mode has the sharp filter and the others do not because the DAC is operating at higher sample rate. With respect to audible band up to nearly 22 kHz though, the frequency response is essentially the same. So anyone saying tonality has changed with upscaling modes needs to re-think that.

CHORD M-scaler and Hugo 2 Listening Tests
Conveniently, the switch between bypass and 2X upsampling was seamless. So I used that to perform listening tests. I say some because the button cycles to higher rates and there, it causes a glitch/pause which completely throws off your mind. Going by forward mode of bypass to 2X, I detected no difference at all. Nothing changes as far as tonality, soundstage, etc. I captured a couple of samples for you to listen as well:

You can listen right in the dropbox or download them. If you are sure there is a difference, go ahead and say which one is M-scaler bypass and which is 2X.

FYI I could not run a null test with DeltaWave as there is too much clock drift and clips are not lined up. The difference shown was the same as two consecutive captures without changing anything.

Conclusions
I was very disappointed to see high noise levels and jitter on Coax outputs of such an expensive digital products. And one where its designer claims you can hear problems at 300 dBFS. Well, if you can hear that well, then maybe you can hear this jitter too so I suggest not releasing a product that performs this bad. Second, there is a serious compatibility issue with third-part DAC that I tested. Maybe it is OK with other DACs, I don't know. But grabbing a sample DAC and having such serious degradation in its performance with M-scaler is very concerning.

Putting design issues aside, I found no audible difference in upsampling with company's own DAC. As it should be. The differences in the filter are above audible band so they should not be audible. Is it nice to have a sharper filter? Sure. But I sure as heck wouldn't pay nearly $6,000 to get that.

Bottom line, I don't see a reason to own M-Scaler. It can damage the audio signal in some cases and in others, provide no audible benefit. If people think otherwise, I highly suggest performing a blind test with enough repetition to provide statistically valid results. Otherwise, the M-scaler remains as a product with no purpose.

Needless to say, I can't recommend the CHORD M-Scaler.

amirm said:
I suggest not releasing a problem that performs this bad.
Click to expand...

Not sure if it's a slip but it's actually funny.
OP

Thanks. Corrected the text. Too lazy to correct the graphs.

VintageFlanker said:
Anyway, people will call your test invalid since it is supposed to be paired with Chord DACs...
Click to expand...

World's most expensive pinball machine--without the pinballs, of course.

amirm said:
It was paired with Chord DAC, the Hugo 2.
Click to expand...

Yup, deleted. Now there's nothing else to complain about unless "This should be paired with the higher end Hugo TT" or the classic "you do listen to music, not graphs".
Anti-BS Crusader
J

Wow... thanks for the review Amir. $5.5K for a pipe dream that produces too much jitter and noise, specially considering the high cost. It doesn't even look as good esthetically as other Chord products. They really optimized this one to squeeze out as much money as possible from gullible costumers that swear by Chord products.
Last edited: Jul 6, 2022
D

My expectations of pretentious audiophilia have been met. Thank you.
I'm your boogie man, that's what I am.

amirm said:
Conclusions
I was very disappointed to see high noise levels and jitter on Coax outputs of such an expensive digital products. And one where its designer claims you can hear problems at 300 dBFS. Well, if you can hear that well, then maybe you can hear this jitter too so I suggest not releasing a product that performs this bad.
Click to expand...

300dB? As in 1E15
Designer of Silver 5L - Equipment list on About
BSc, MSc (EE, Imperial College, London), MA (acoustics, Surrey University, UK)
My acoustically treated Home Theatre
How loud is loud, how to measure it? Is THX calibration bad for your health?

I can see a big management meeting @ CHORD occurring over this review! Justly so...

I DID hear a difference in an all Chord system, but thought it was level more than anything else. Song was this -

how did you do the listening this thing? is not supposed to work with the hugo tt2 or chord qutest?

Huh I expected this to do essentially nothing. Seems I set bar a little high.
Thanks for the review
OP

Yes or something like it. It is core to Rob Watts' marketing talk on these products. Just watch any of his videos.
Amir
Founder, Audio Science Review
Founder, Madrona Digital
Review Thread Rules
My Technical Background
My YouTube Channel
OP

BrokenEnglishGuy said:
how did you do the listening this thing? is not supposed to work with the hugo tt2 or chord qutest?
Click to expand...

I listened to Hugo 2 output while cycling through bypass and 2X upsampling on M-scaler.

I did not use tt2 or qutest so not sure why you are asking me about them. Hugo 2 most definitely works with it. Any restriction there is only for dual coax support anyway.
Amir
Founder, Audio Science Review
Founder, Madrona Digital
Review Thread Rules
My Technical Background
My YouTube Channel
Χ

In pure audiophile terms, the Chord M-Scaler is obviously the weakest link the system. A good sounding DAC like the Topping D70S is very source-dependent and deserve to be fed with better constructed digital signal.

The excellent although revealing review aside I think that the CHORD illuminated indicator buttons are the most poorly ergonomized design I have seen. It is truly annoying, can only create confusion and a need to repetitively refer to the literature for decoding the information they are conveying. CHORD really should re-evaluate their stance on this rubbish.
A

If it is expensive and if I do not know how it works it must be good, right? Foolish product for foolish audiophiles. Thank you Amir for another great review of a emperor-new-clothes product. In this case the Emperor is not only naked, but his skin is also scarred and burned by the expensive new clothes.

Poll - The most useless thing ever