mcdn said:
Sure, maybe it's not, but it's got a flat response and THD below 5% from 40Hz upwards at 86dBSPL, in a small package. Can you point to other speaker measurements that cause you to say it's not special?
Click to expand...

I feel the JBL A130 is one example. Very good above 55hrz, quite low in distortion (and subjectively I though sound excellent) and on sale a pair of complete speakers costs less than 1/2 of one bare purifi woofer. I'd say if you are going to use a sub/subs then the purifi is really hard to value. Though compression is not measured here.
The A130 can be Eq'd to a 6+ harman score with 8+ using a sub as well.

(not saying I am not impressed with this speaker - I am, just not as sure about the woofers due to price)
Last edited: Oct 4, 2021
"The room response must be averaged to recognize trends in the summation of direct and reflected signals at the microphone. The resulting curves must not be taken as a 1:1 representation of what is heard as loudness at different frequencies. The room response gives a picture of the steady state SPL, where sound generation and sound dissipation in the room have reached their equilibrium." -Linkwitz

Wow. Just wow. Plaudits to @Rick Sykora for such a textbook Spin! Never saw anything flatter, even so without DSP. (Edit: My bad, needed to read that twice)

Is there any chance that THD peaks (resonances) at 96dB could be fixed with some bracing?
Last edited: Oct 4, 2021
Anti-BS Crusader
R

It would be very hard to surpass the studio monitor "establishment" I guess, but as a "case study" it is very interesting.
Prices can only be taken down with mass production, is there enough demand for a "newcomer"?
But then, maybe the Purifi esteem will help.

Hifihedgehog said:
Now, we just need to bring the price point down below the magic $1000 a pair price point and this might just become the Objective2 of speakers starting a movement among audio companies to aim for absolute objective fidelity.
Click to expand...

As expected from @ctrl and the chosen drivers (the Seas DXT tweeter is used also on Kii Three and Grimm LS1 and no words needed about the Purifi woofer) one of the best 2-way loudspeakers someone can buy or build, hope also this cheaper and passive but also very good measuring alternative will be NFSed one day https://heissmann-acoustics.de/en/dxt-mon-182/
Some comments from Floyd Toole about room curve targets, room EQ and more

This is an outstandingly good result for a 2-way speaker, due to great design and very good but expensive drivers. I'm wondering though if a 3-way design using cheaper drivers might be better in the end for less money (see the KH310).
E

I'm not sure what to make of it however. Has it been EQ'd in DSP within an inch of its life and if so, why the obvious hole in the response, at the crossover point, dead in the most important part of the midrange?
Click to expand...

Hole in the response?

Hole in the response??

Just kidding, but the “slight dip” in the response is virtually unavoidable due to the 2 way design, the distance between the drivers and the crossover creating a cancellation on the vertical off- axis and thus a mild cancellation in the perceived in room total response.

I doubt there are many, if any, two ways which aren’t coaxial designs that don’t have this dip *without bumped on axis response in the same reigon*

Edit: I wouldn't call this ËQd to within an inch of its life: 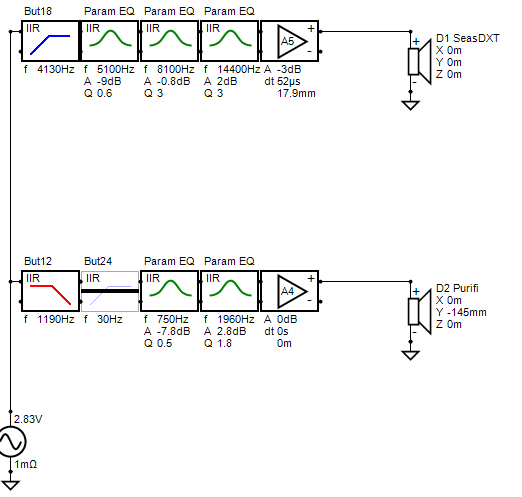 Bravo to the directiva team. 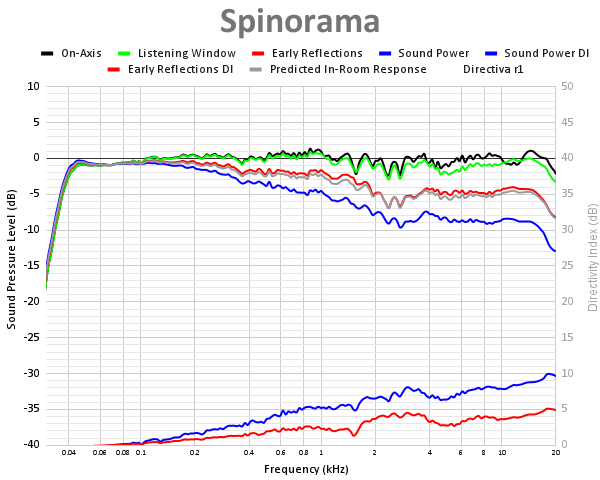 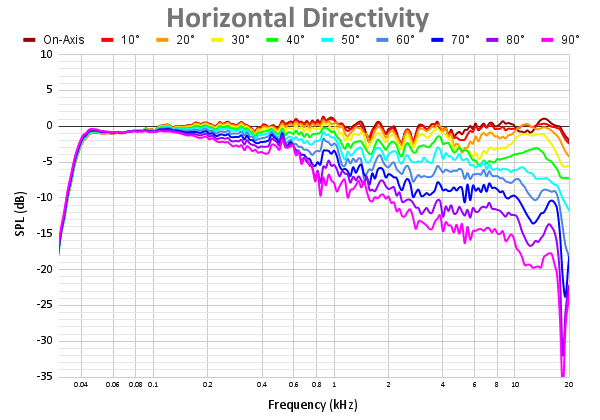 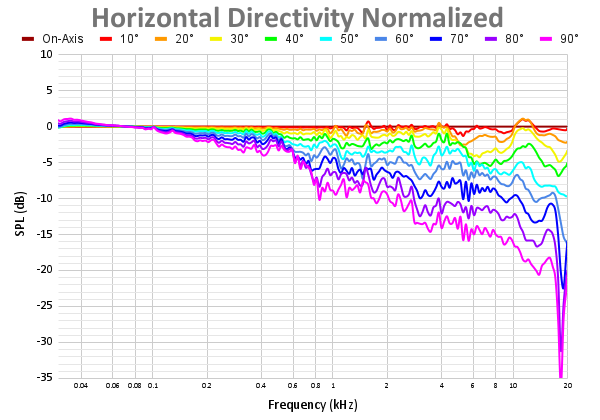 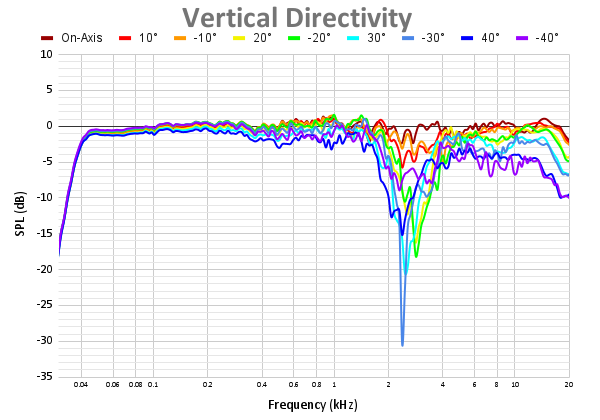 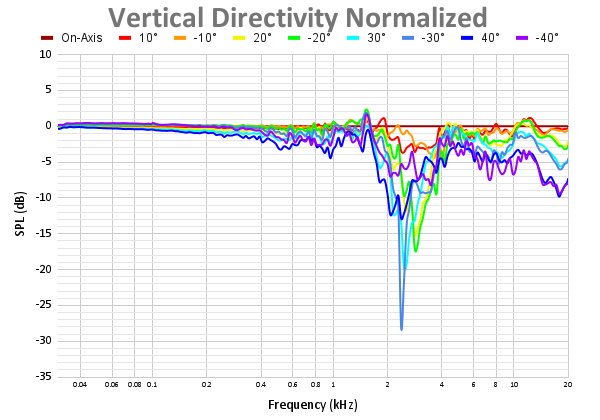 respice finem said:
Yes, but I guess it's not the point of such projects. It rather goes to show what can be done with minimal resources.
Click to expand...

The Klippel analyzer isn’t exactly minimal, didn’t they have access to it while working on the design or I misread?
OP

VintageFlanker said:
Never saw anything flatter, even so without DSP.
Click to expand...

Isn‘t this using a MiniDSP and utilizing its ability to do 10 bands of PEQ?
Loudspeaker Data & Preference Ratings
A

LTig said:
This is an outstandingly good result for a 2-way speaker, due to great design and very good but expensive drivers. I'm wondering though if a 3-way design using cheaper drivers might be better in the end for less money (see the KH310).
Click to expand...

From the thread I believe format was chosen because of the easier shipping.
For DIY I'd prefer to look at something like "classic" 3 way with 12 inch woofer. Maybe even closed box.
For the price of purify woofer a 6.5 midrange and 12 (15?) inch woofer looks possible.
Last edited: Oct 4, 2021
OP

MZKM said:
Isn‘t this using a MiniDSP and utilizing its ability to do 10 bands of PEQ?
Click to expand...

Yes. A handful of filters are in there in addition to crossover.
Amir
Founder, Audio Science Review
Founder, Madrona Digital
Contributing Editor, Widescreen Review Magazine
Click for My Technical Background
My YouTube Channel

respice finem said:
It rather goes to show what can be done with minimal resources.
Click to expand...

gvl said:
Great effort but the value, apart from having fun building it, is not there. A pair of Genelecs 8040 will be cheaper and at least as good.
Click to expand...

Bass & max SPL will probably go to the Directiva.

Though, this project seemed mainly about showing what is possible using modern methods & access to the NFS scanner (though virtualized/estimated Spinoramas were used in VituoxCAD) with a semi-restrained budget (go crazy and build a tower with a 34mm BlieSMa tweeter, dual 4.5” Purifi as MTM midrange, dual 6.5” Purifi woofers, and dual side-opposing Purifi passive radiators; though some Satori Textreme woofers (similar to Perlisten) seems awesome too).
Last edited: Oct 4, 2021
Loudspeaker Data & Preference Ratings

This is quite an achievement. Thumbs up to everyone involved!

Since we don't have a lavish marketing page for this product with fluffy language to admire, it would be nice to have a short write-up on the features design principles and design incarnation to come to this version. It would save a lot of people a lot of reading work on the Directiva topic And don't skimp on the hyperbole
Do diamonds shine on the dark side of the moon?
A

I expected @amirm to find the design a bit on the bright side due to the 'directivity error'.

Hopefully the next iteration of the speaker would smooth that out .

Considering that the woofers only cost as much as an LS50 Meta, i think this design gets ALOT of things really well (in terms of output and response linearity) but future iterations should primirarily focus on ironing out that directivity error and then just smoothing out the LW with EQ if the tweeter had to be changed.

Would love to see future iteration with 2 or 4 Purifi woofers with a linear response all the way to 20Hz with front ports / front passive radiator.
C

gvl said:
Great effort but the value, apart from having fun building it, is not there. A pair of Genelecs 8040 will be cheaper and at least as good.
Click to expand...

YSC said:
This looks amazing until I saw the price, now time to go back to genelec and Neumann with my bank account
Click to expand...

With another woofer from SBAcoustics, for example, one could achieve a similar result at a much lower price, with a few sacrifices in HD, IMD and DV.

617 said:
My hope from this review would be that the purefi woofer would somehow distinguish itself in terms of bass or output but this review doesn't seem to indicate anything special.
Click to expand...

When you look at the measurements like this, it's almost boring.

On the other hand, we have a tiny speaker that, according to Amir's measurement, achieves an f3 of around 40Hz ( without DSP expansion) and can also produce reasonably low bass sound pressure levels due to the Xmax of +-10mm.

A cheap 6 or 6.5'' driver has a typical Xmax of about +-5mm. The displacement volume of the Purifi driver therefore corresponds to that of about two inexpensive 6.5'' drivers.

The quality of the drivers used is also reflected in the DSP settings. Very few corrections have to be made to achieve a good result.

As Amir said, the increased harmonic distortion around 400Hz was caused by the measurement setup.
In this frequency range, the Purifi driver and the passive resonator show no abnormalities.

The slightly increased HD3 (see 1. in the graph) around 9kHz and HD2 (see 2.) around 13.5kHz is due to the violent (damned translation programs ) breakup of the tweeter around 27kHz. 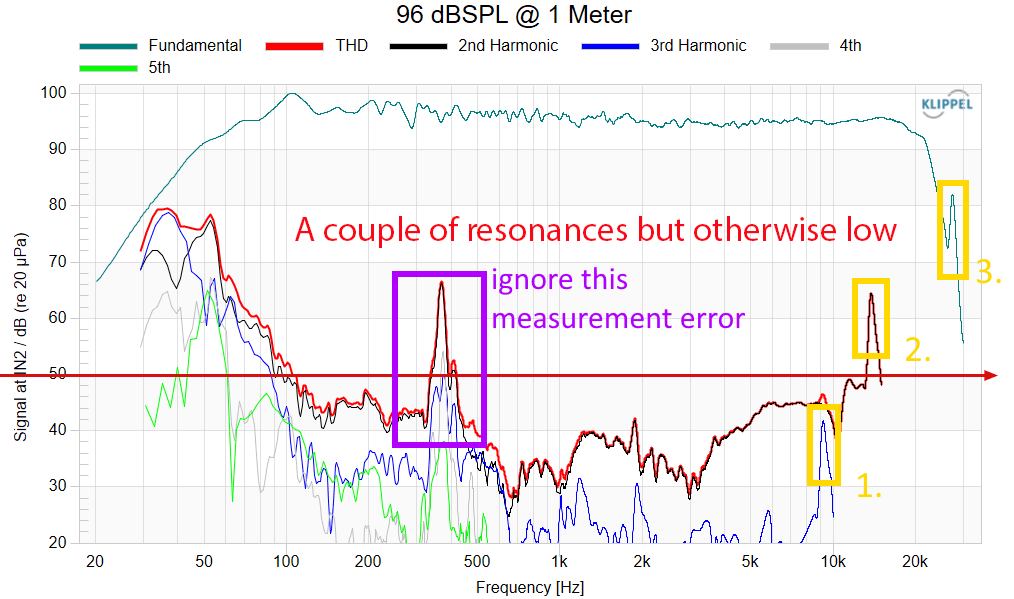 In Amir's measurement the 27kHz break-up is just visible due to the lowpass filter of the measurement system. In reality, this is much more pronounced and the cause of the (inaudible) increased HD values.
Manufacturer measurement of the Seas-DXT tweeter with break-up resonance at 27kHz: 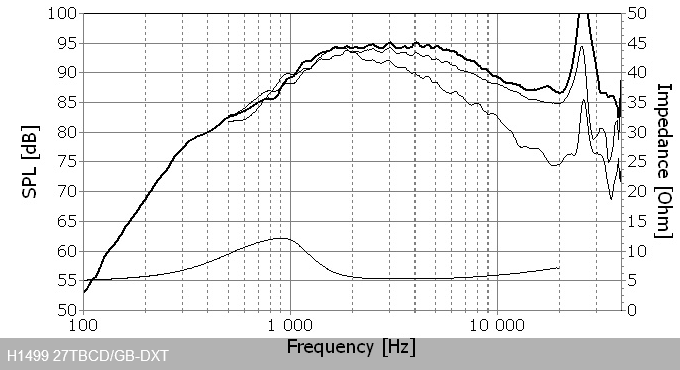 For those interested, I have attached the complete VCAD project that corresponds to the version of Directiva measured by Amir.

I thought this was the final filter design?

abdo123 said:
I thought this was the final filter design?
Click to expand...

Didn't say final. I said filter design. Its open source, so waiting to see what it is at all? What we see is the summed response of two drivers with DSP, but what EQs and Xover slopes have been used to get here?

EDIT: NVM, @ctrl posted it above you! EPIC!!
You must log in or register to reply here.