This is a review and detailed measurements of the JBL Stage A130 bookshelf speaker. I purchases these online but can't find the receipt. They normally cost US $300/pair but the place I bought them from has them for $209 right now.

The A130 looks plain until you take off the grill and then looks handsome: 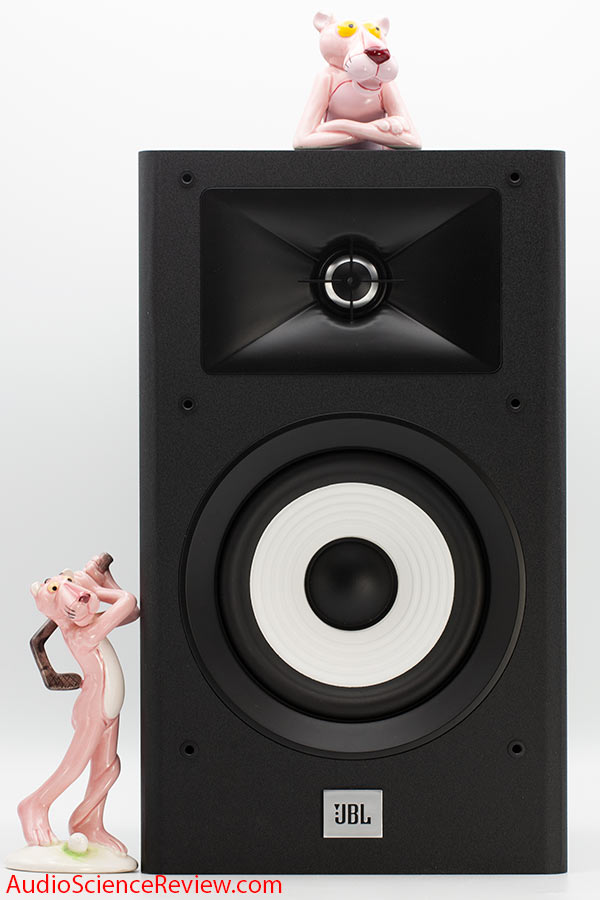 I like the rounded corners which are easier on the hands and reduce diffraction: 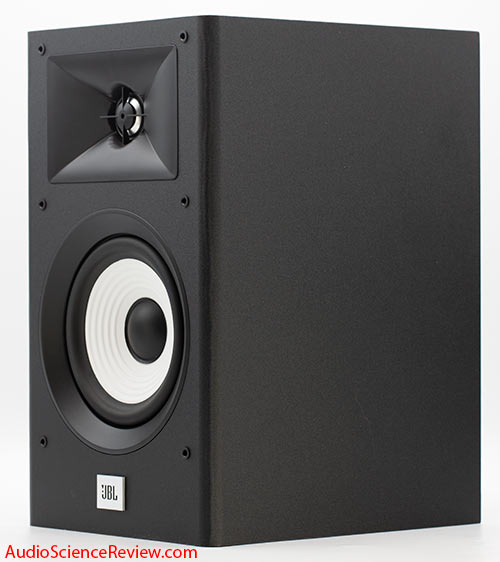 On the other hand, I did not like the binding posts that were too close to each other and to the back of the cup: 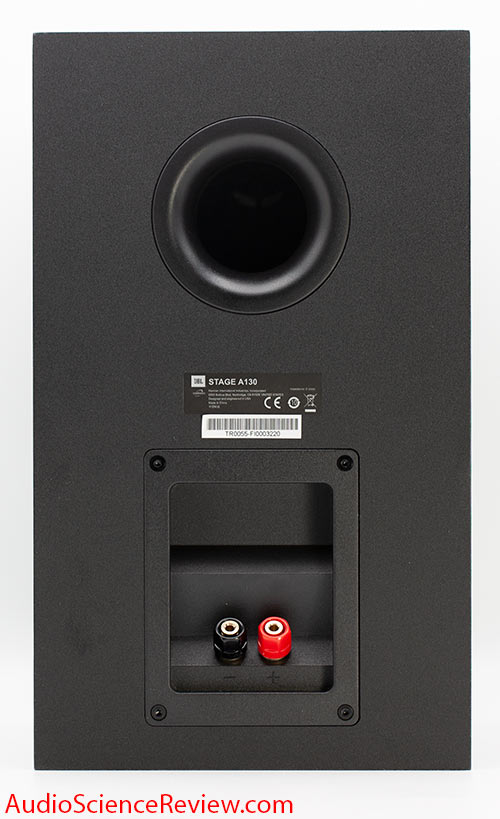 Fortunately you only deal with them once.

I did not show the grill but it has metal pins and took fair amount of energy to pull it off. So someone was thinking of longevity given that the budget did not allow magnetic mount.

I performed over 1000 measurement which resulted in error rate mostly below 1%.

Temperature was 64 degrees F. Measurement location is at sea level so you compute the pressure.

The grill was off and measurements were referenced to tweeter center.

JBL Stage A130 Measurements
Acoustic measurements can be grouped in a way that can be perceptually analyzed to determine how good a speaker is and how it can be used in a room. This so called spinorama shows us just about everything we need to know about the speaker with respect to tonality and some flaws: 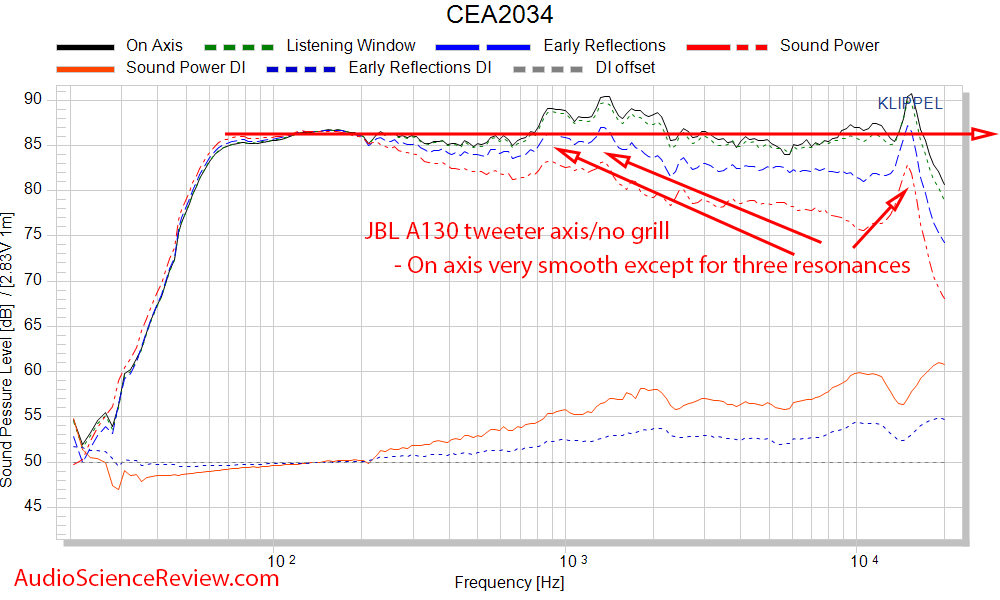 Ignoring the three prominent peaks, on-axis response is actually quite flat. The cause of those peaks is quite evident if we measure each radiating surface at close distance: 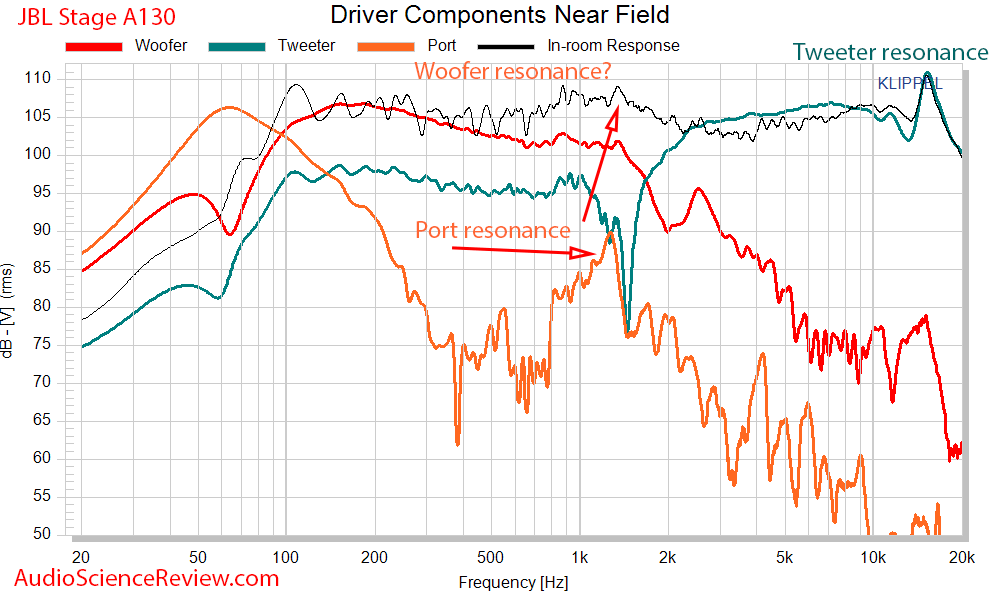 Starting at the right, the tweeter is clearly peaking at around 15 kHz. Coming down we see the peak around 1.3 kHz which I think is caused by the port resonance (orange). There is another peak around 870 Hz which may be from the woofer itself or combination with the port.

Early window reflections show quite a similarity (for good or bad) with the direct on-axis sound: 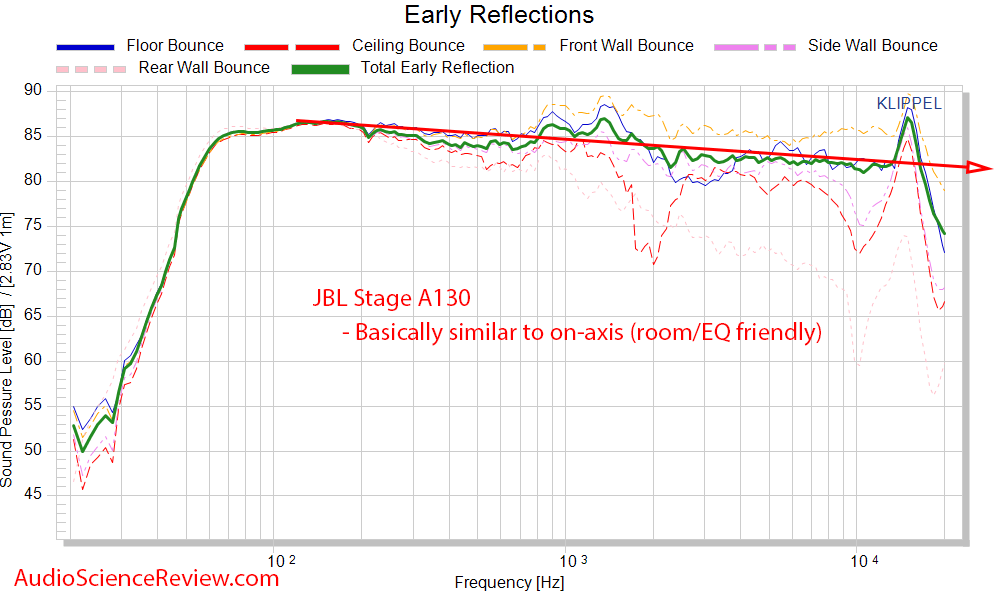 Putting the two together gives us a predicted response that is slightly smoothed over version of on-axis: 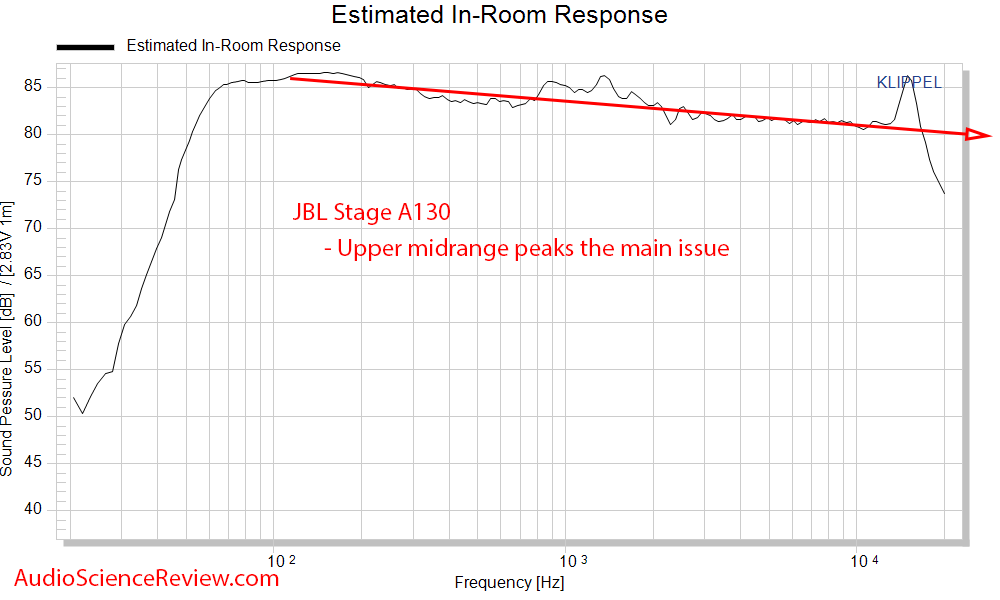 From experience I know that the peaking from 900 to 2 kHz can actually be pleasant and far better than dips in that area. The final resonance likely is not very audible due its very high frequency and narrowness.

Here is our impedance plot which shows the resonances as well: 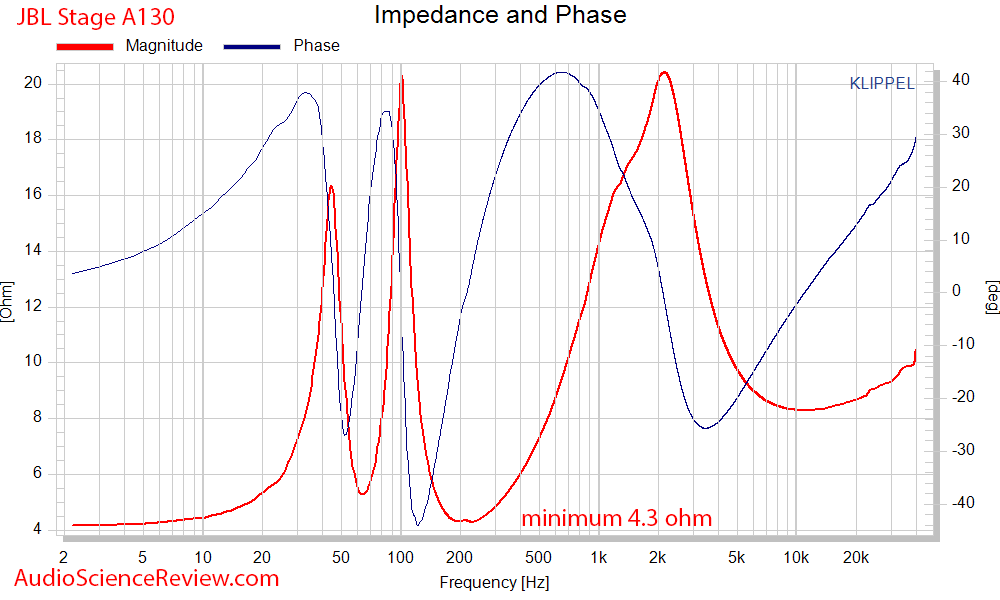 The fancy trademark JBL waveguide does it job well in controlling directivity: 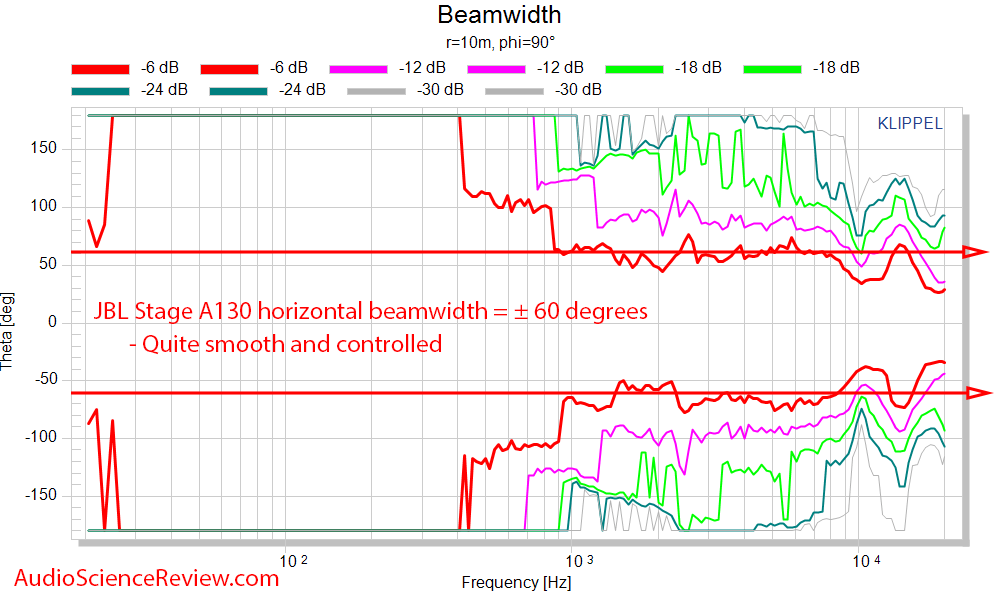 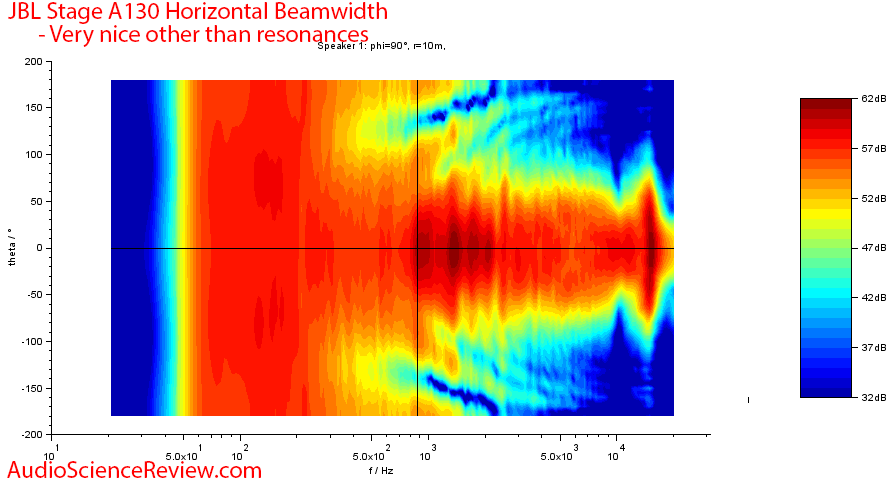 These are active, professional monitor class directivity and not something we often see in bargain speakers.

I was pleased that we had more wiggle room vertically, making the height of the speaker less critical: 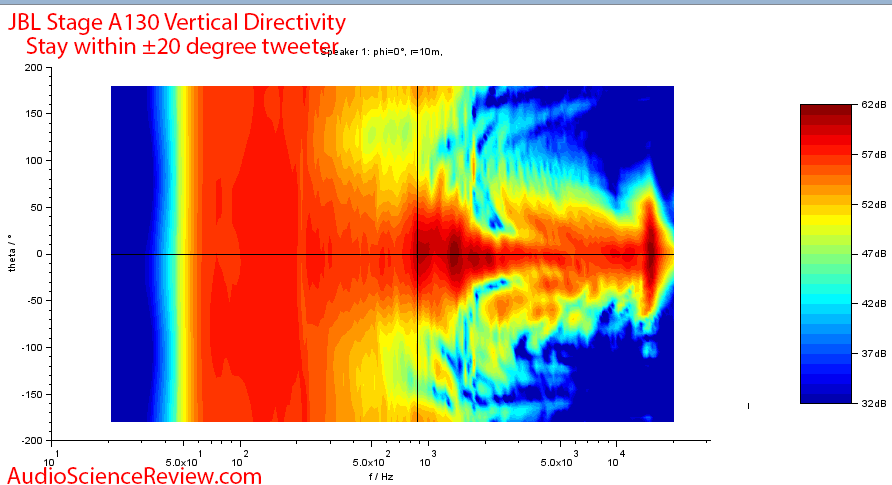 Most impressive was the low amount of distortion:

If those resonances were not there around 1 kHz and at 15 kHz, this would look even cleaner. 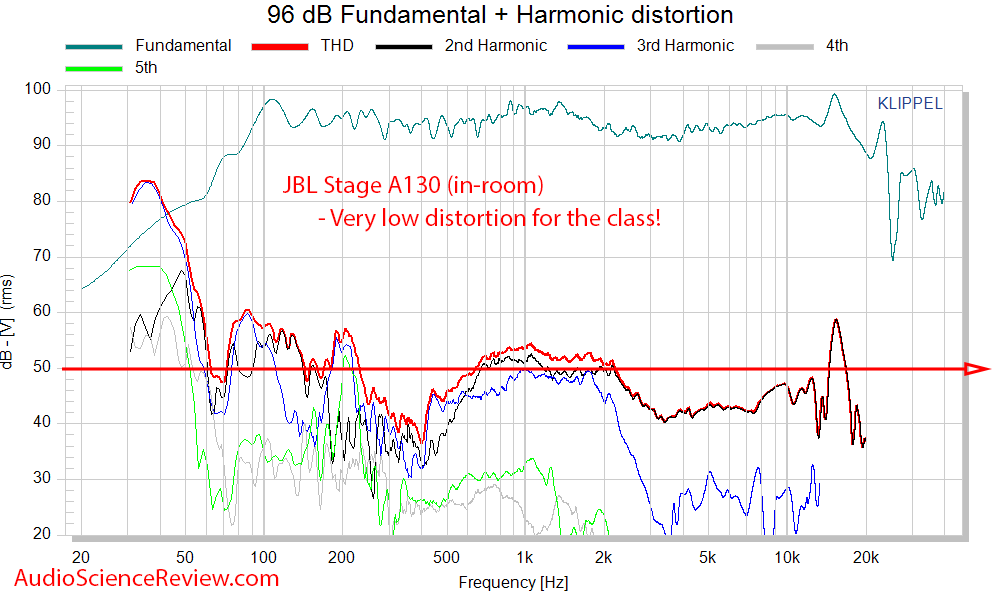 We can see our 50 dB reference line is barely exceeded until we get very low in frequency. Did not expect this.

JBL A130 Listening Tests
I started to listen to the A130 as is and as I suspect, the sound was pretty pleasant. Yes, the upper mid had the accentuation that I expected. This actually makes female vocals sound more detailed and more airy. But it was a bit much so I reached in my EQ tool and knocked those two resonances down plus the one at 15 kHz: 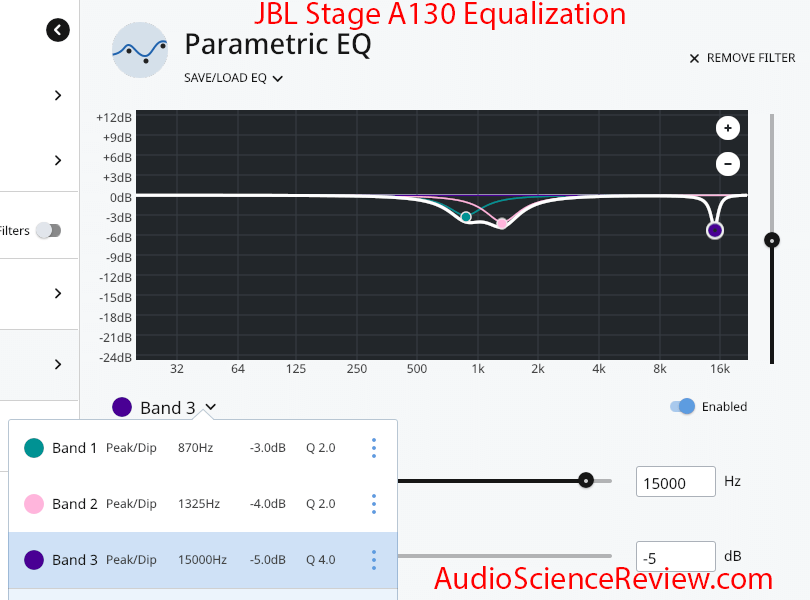 Not only did the first two notches clean up the response but it made the sound of the speaker super clean and effortless. There was a level of fidelity that was giving me goosebumps! I can only envision the cause being reduced distortion to go alone with the better response. The third filter made a very subtle difference but was still worthwhile.

Once there, I started to crank up the volume and this little speaker can play and play loud! Despite me using a single speaker, it had no trouble playing as loud as I wanted. My speaker killer track with deep bass and zero effect on it. Bass played as if it is no big deal producing a level of fidelity that I rarely see, err hear, in speakers let alone a budget one.

Conclusions
Out of the box the JBL A130 gets a lot of things right but leaves us with basically two resonances that are issues. Fortunately the peaking there is not as bad as it seems to the eye. As it was the A130 was more than listenable. Dial in the simple EQ as I did and this speaker outperforms many speakers. It has a fluid, effort-free sound with excellent neutrality that was a joy to listen to across all kinds of music. It simply did not care what I threw at it -- it performed.

I can recommend the A130 even if you don't have an EQ. If you can apply EQ, then the JBL Stage A130 gets one of my highest recommendations. It is a great example of how we can fix one or two minor flaws in a speaker with EQ and create a hybrid solution that is nearly untouchable in its price range or even higher.

Had stored the last batch of Japanese shishito peppers saved up and figured I make a snack out of them: 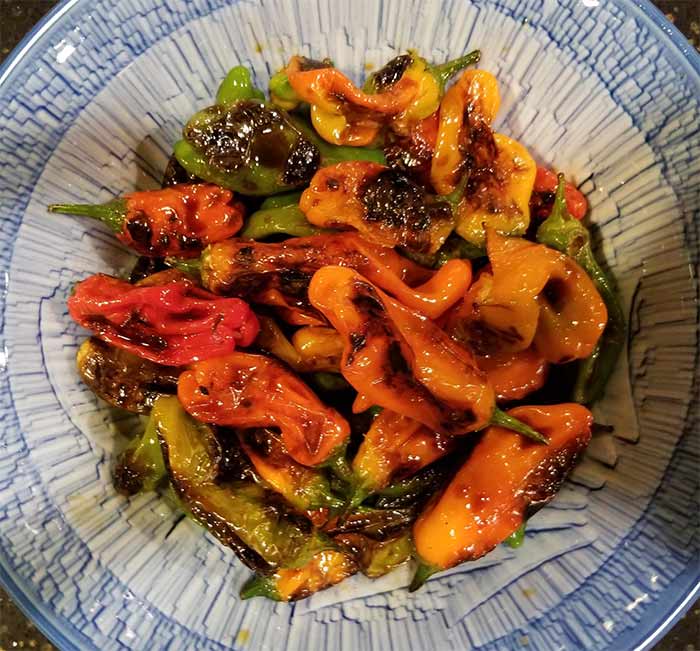 With a touch of lemon juice, soy sauce and salt they were wonderful as always. Normally you only see them in green but I left them on the plants for too long and tehy turned red/orange and a bit sweeter. Yum!!!

That is a GREAT recommendation. I own the JBL 230's which also uses this wave guide design. For anyone thinking about getting the 130 the sound when you have a pair is like having a phantom center channel. The vocals lock right in and I also found the 230's too be a little sensitive to amplifiers. I initially used a Parasound Zamp v3 but when I took the power up a notch using a Carver AV 505 the speakers really opened up.
B

Nice review! Now here is the new king of low distortion budget speaker. If they put in a bit more time to design the wave guide and make perfect directivity and sell for 500, it will be the benchmark of book shelf speaker.

Also available in a brown finish in some markets. 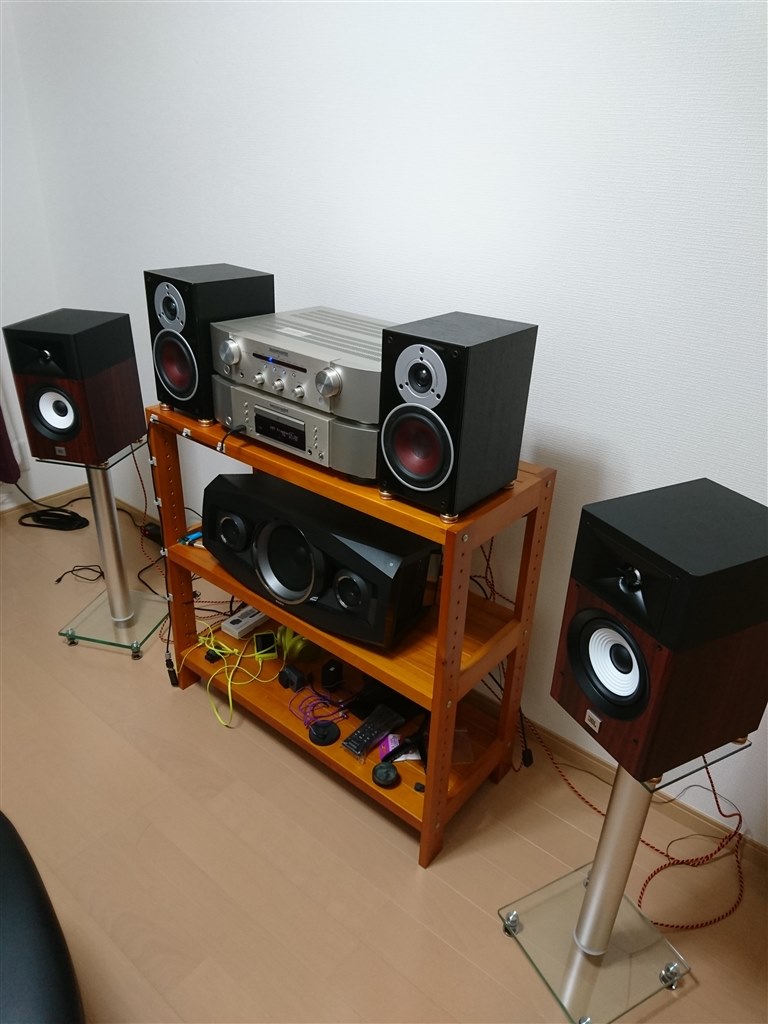 I like the walnut/rosewood finish a lot. Classic looking little speaker and available in Australia at a reasonable price. AU$495pr.
Ricky Roma: I subscribe to the law of contrary public opinion... If everyone thinks one thing, then I say, bet the other way...
W

amirm said:
The grill was not quick to take off so I left it on. Alas even with a flashlight I could not see where the tweeter was. So I eyeballed it and I think I got it a bit wrong. See measurements below.
Click to expand...

Just want to clarify, the measurements are with grills on or off? In the graph it says 'no grills'.
A

Nice to see these results. Attractive speaker. I like the brown finish and it looks sweet on the stands. Nice work JBL.
B

whazzup said:
Just want to clarify, the measurements are with grills on or off? In the graph it says 'no grills'.
Click to expand...

whazzup said:
Just want to clarify, the measurements are with grills on or off? In the graph it says 'no grills'.
Click to expand...

Amirm, how does the JBL 130 compare to the other Harman speaker you recently reviewed that is around the same price, the Infinity R162?
W

Thanks! But in this case, had the grilles been installed, would that have reduced the 15k peak?
A

I can't imagine grills making that specific or enough of a difference. No need, we have equalizers for sometime now and that is what they are for.

Those passive entry models from Harman were always great value for money, I hate Harman though for their incredibly bad distribution in Europe where it seems you cant buy them (only some stupid low budget bluetooth loudspeakers and headphones) and its even very hard to get any Revel and even harder to find a dealer where you can audition them...
Some comments from Floyd Toole about room curve targets, room EQ and more

But can't find them anywhere in europe, but in asia, india and australia. Have Jbl fear of all the berlin loudspeaker brands?
W

A Surfer said:
I can't imagine grills making that specific or enough of a difference. No need, we have equalizers for sometime now and that is what they are for.
Click to expand...

At least for my monitor audio bronze speakers, i remember the metal tweeter grilles did cause some differences in REW measurements. Anyway just curious.
O

Directivity:
Horizontal pretty good thanks to the waveguide.
Better stay at tweeter height
Horizontally, better toe-in the speakers by 10/20deg and have the axis crossing in front of the listening location 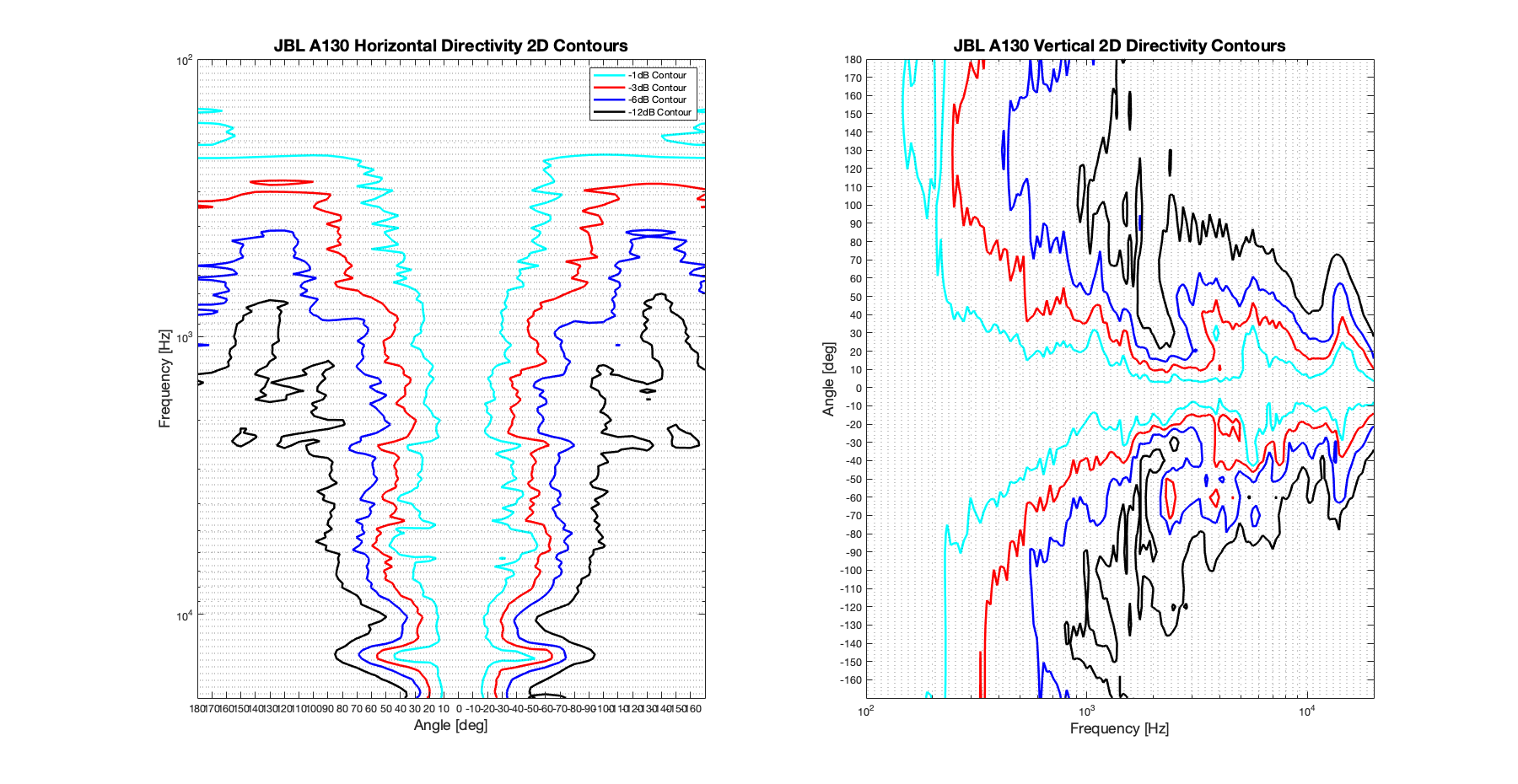 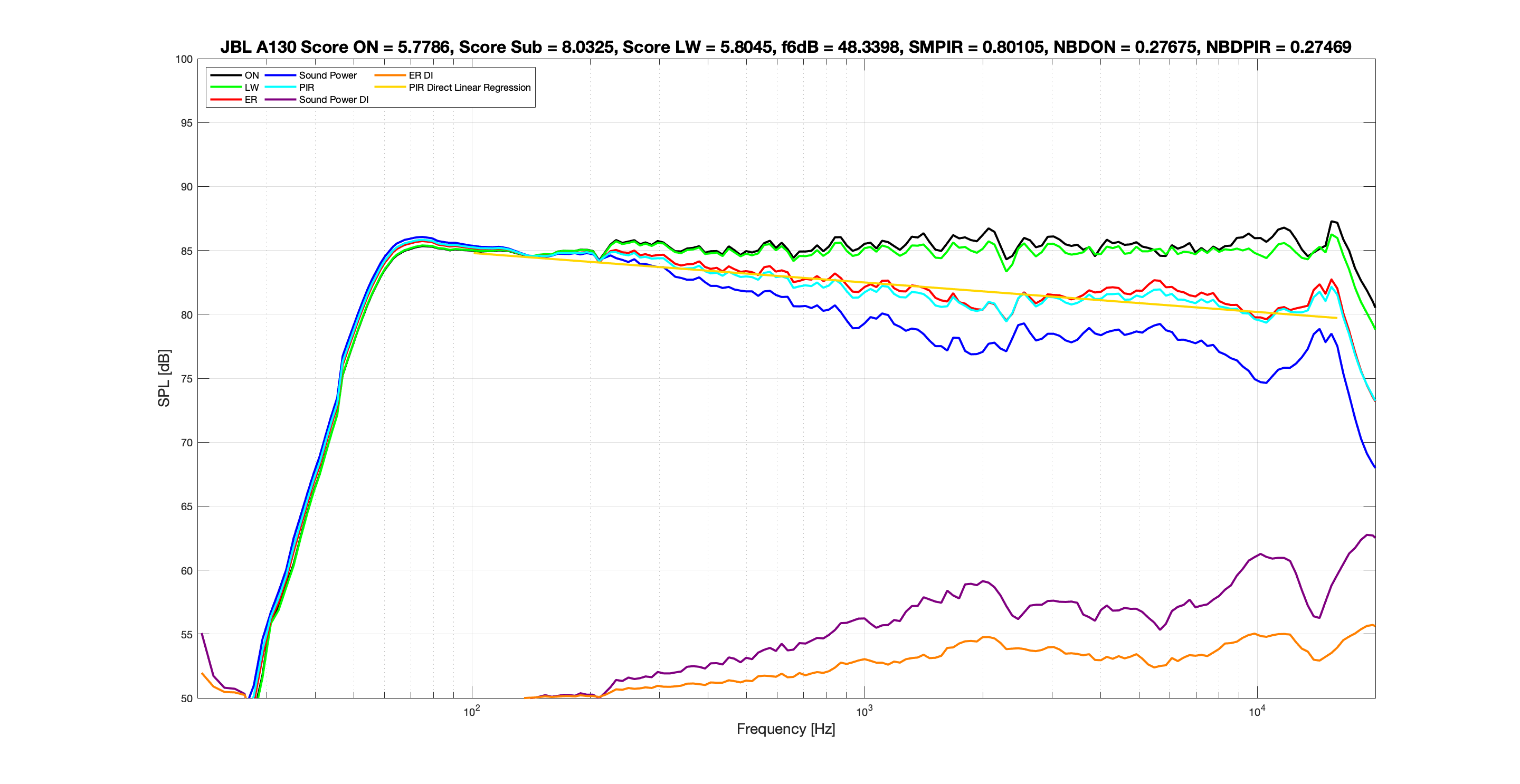 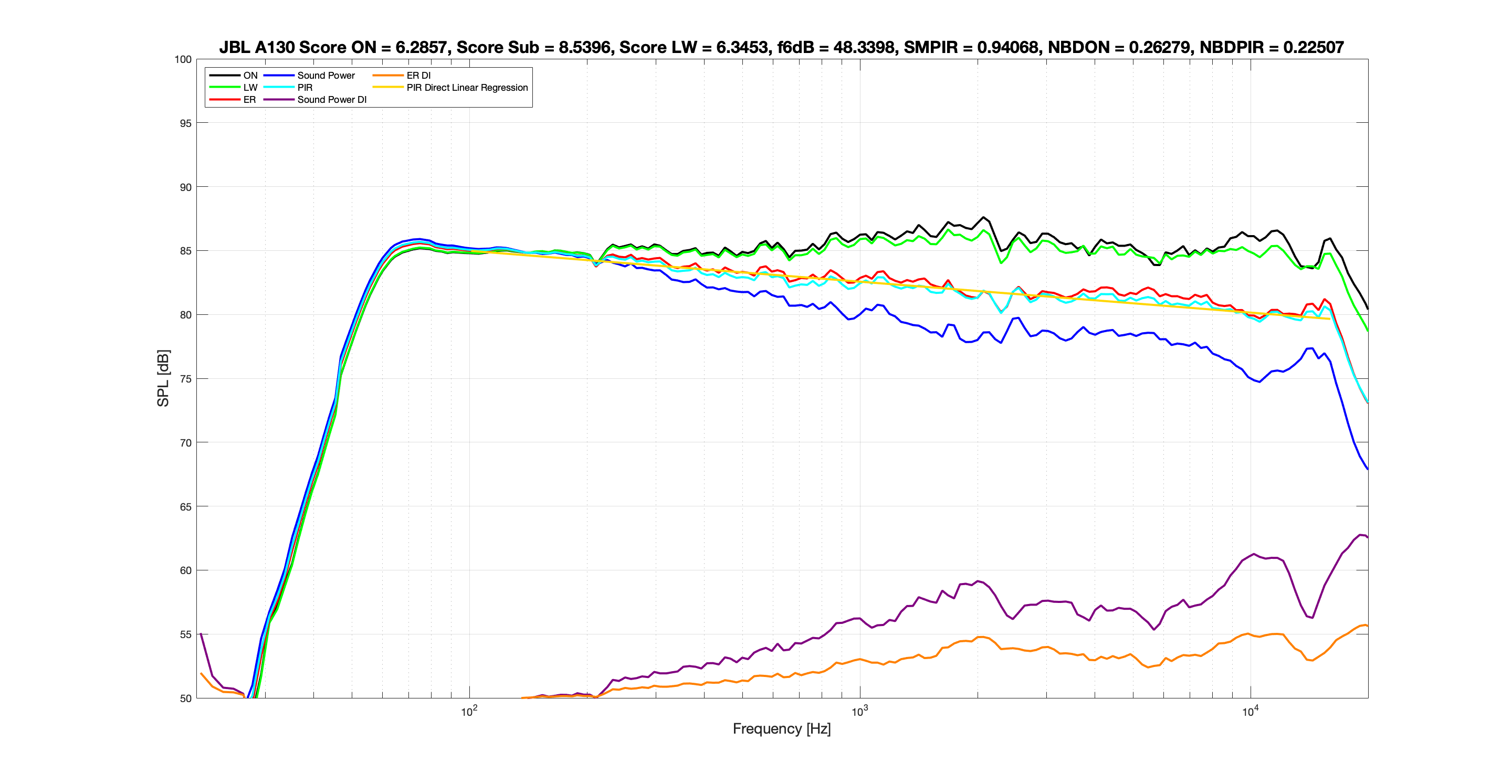 The rest of the plots is attached.

Process and analyze the NFS data yourself, including the Preference Score, Correct Spinorama, Directivity 2D and 3D live etc. :
Make sure you have the latest version
A Matlab - Octave Tool to calculate the correct Spinorama - CEA2034 from the NFS data
W

This is certainly a case of not to judge a speaker by its looks.

The EQ is included in the roon software.
https://roonlabs.com/
You must log in or register to reply here.