This is a review and detailed measurements of the Topping BC3 Bluetooth receiver and headphone amplifier. It was sent to me by the online seller, Yaoyaotiger HIFI Audio Store and costs US $69. This is a follow up to our previous tests of Bluetooth receivers and investigating performance of various codecs supported within.

The shiny plastic and slick design sets the BC3 apart for the typical Topping desktop products: 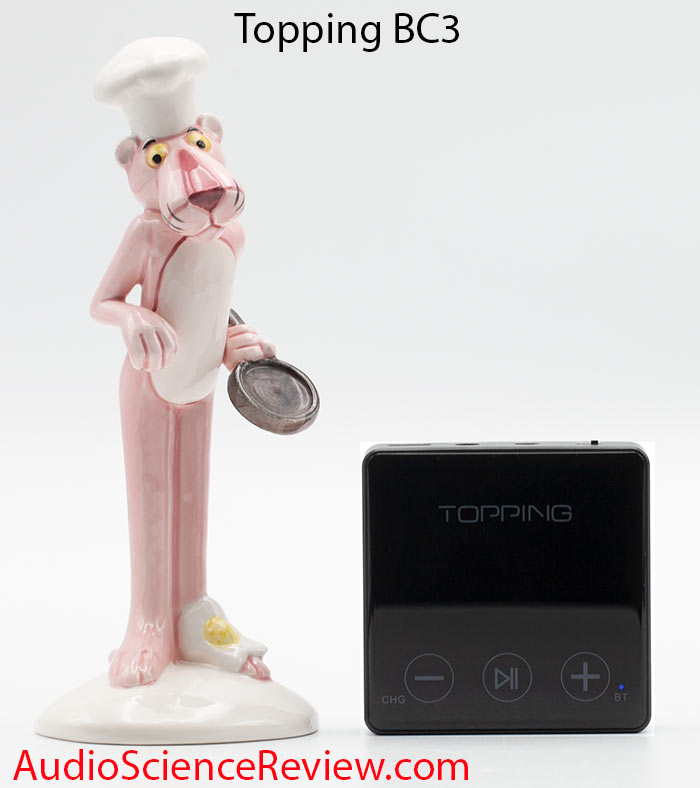 The touch screen buttons are pretty but with no tactile feedback, they are kind of inconvenient to use. There is a lock button to deactivate them which is nice: 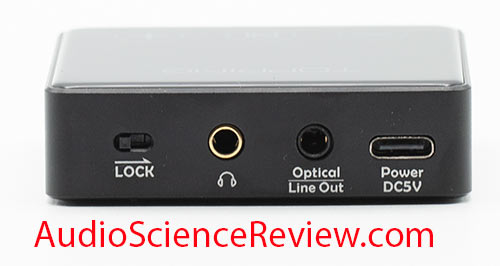 Nice to see both headphone amplifier and digital/analog line outs. There is a convenient Toslink mini to full size adapter in the box which I used for my testing. The unit has battery built-in so you can charge it and use it on the go (car, commute, etc.). I did all of my testing while I powered it through USB-C from my computer monitor's hub (same port I use for all of my DAC testing).

Topping BC3 Digital Measurements
This is the first Bluetooth receiver we are testing that has digital output. This is exciting because we can see the true performance of the various codecs without the performance of the DAC getting in the way. The source for the stream was my Samsung S8+ phone running Roon player with Android developer options enabled so I could select the Bluetooth codec. Prior to this test, I was not successful in getting LDAC to work. I figured out the issue here. Turns out in their infinite wisdom, whoever did this work decided that you must enable LDAC both in the developer options and Bluetooth settings! 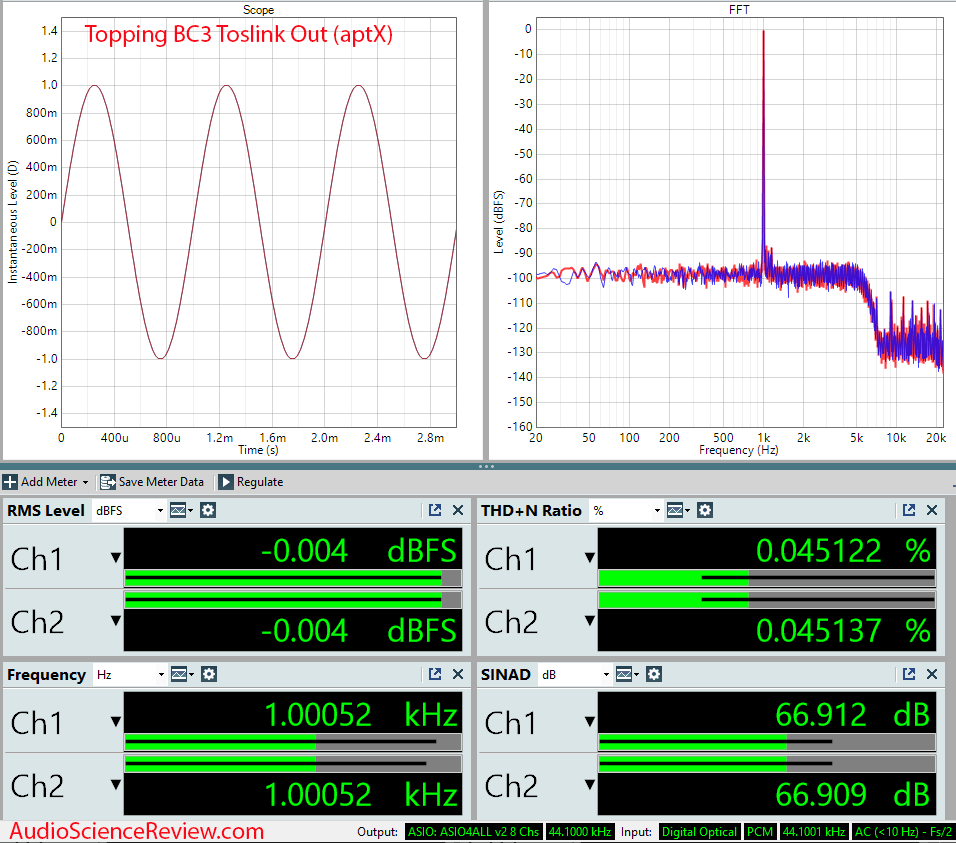 We immediate see the signature of aptX with that stepped down response in frequencies above 5 kHz. The higher frequencies are more "random" (have higher entropy) so harder to compress. By lowering their levels or truncating them, there is less for the codec to do.

Switching to AAC shows the poor quality we have seen which I am guessing is due to Android implementation of AAC encoder (meant to test this with an iPhone but forgot -- will do so later): 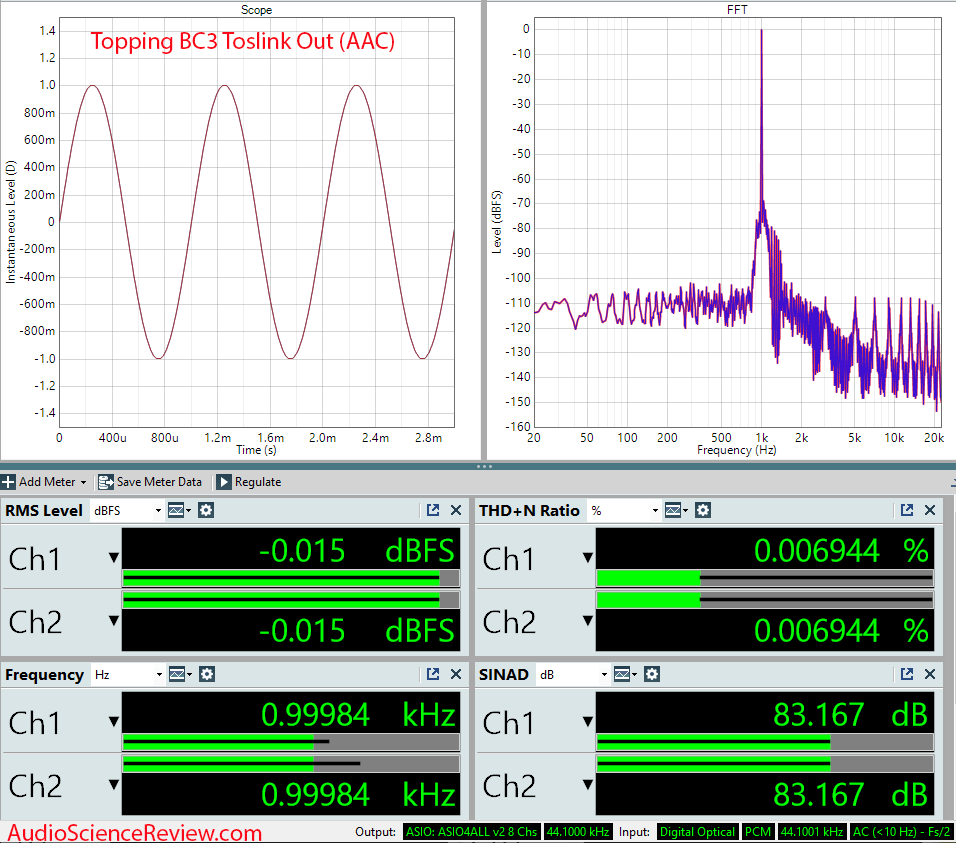 We get a big boost in SINAD but I am not happy about all the artifacts. In my prior testing I found SBC to actually sound better: 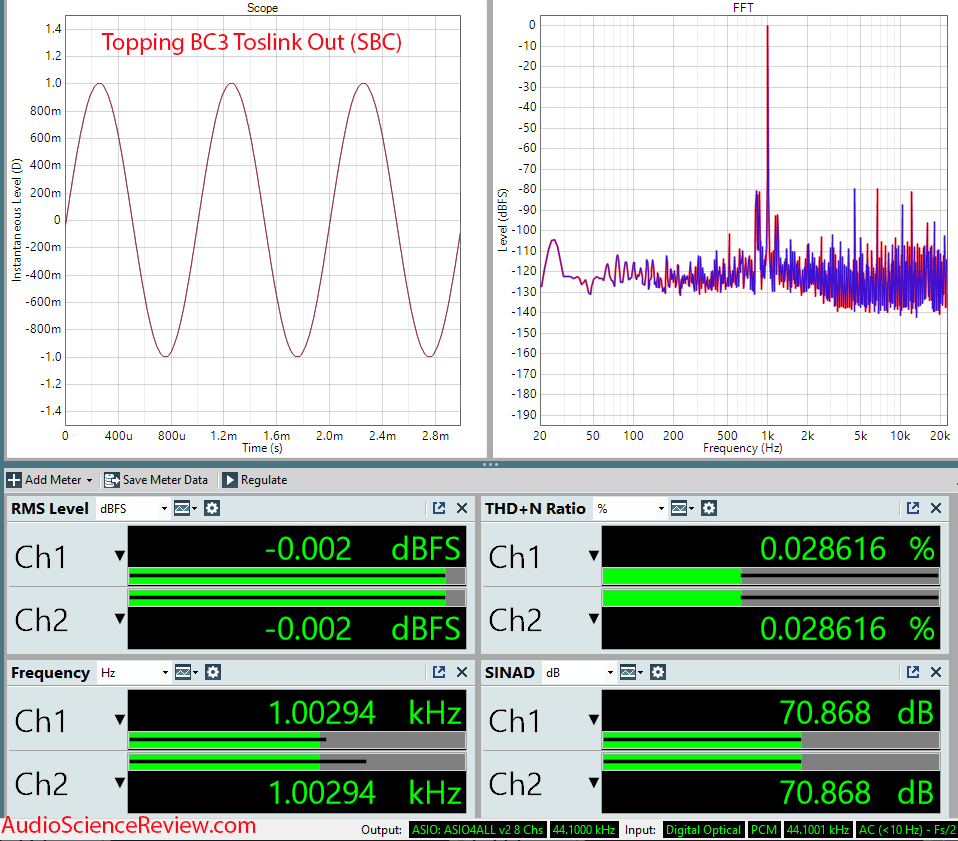 So our previous conclusions more or less hold with the codecs being the limiting factor not the DACs. However, now we have a new kid on the block, namely the Sony LDAC codec. Is it as good as its hype? Let's start showing its performance with 16 bit setting of the codec (source is still 24 bits): 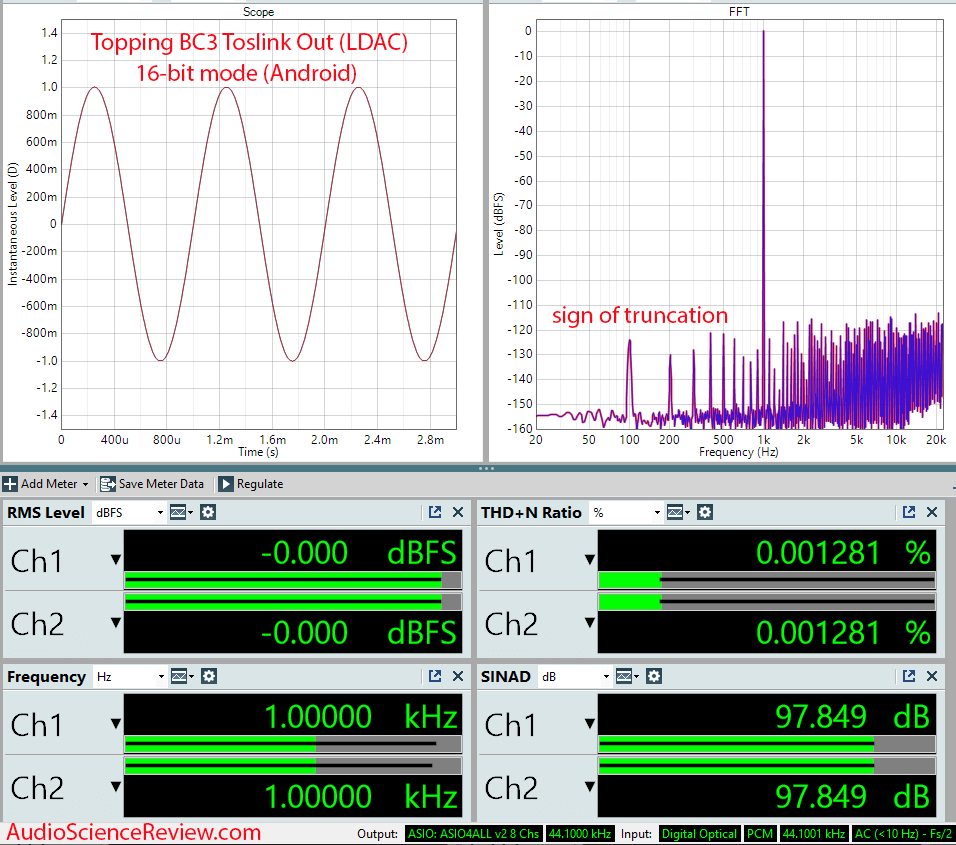 Performance jump quite a bit showing a SINAD which is the limit of 16 bit bit depth. Switching to 24 bit mode is this tester gets a big smile: 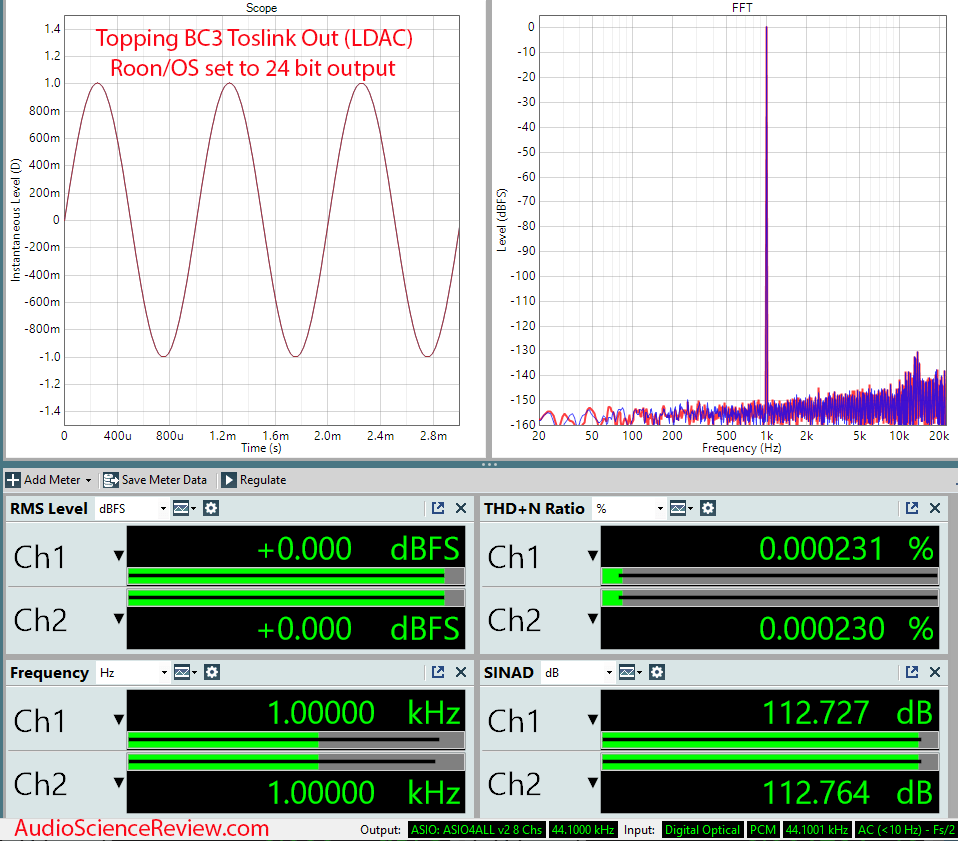 Wow! What an improvement. Then again, all the other codecs should have done excellently with this simple sine wave that is dead easy to encode. But they didn't so LDAC in 24-bit mode wins big time. Even in 16 bit more it leaves the other codecs behind.

All of these measurements are in digital domain. Let's fee the Toslink to a Topping D30 Pro and measure its analog output using LDAC: 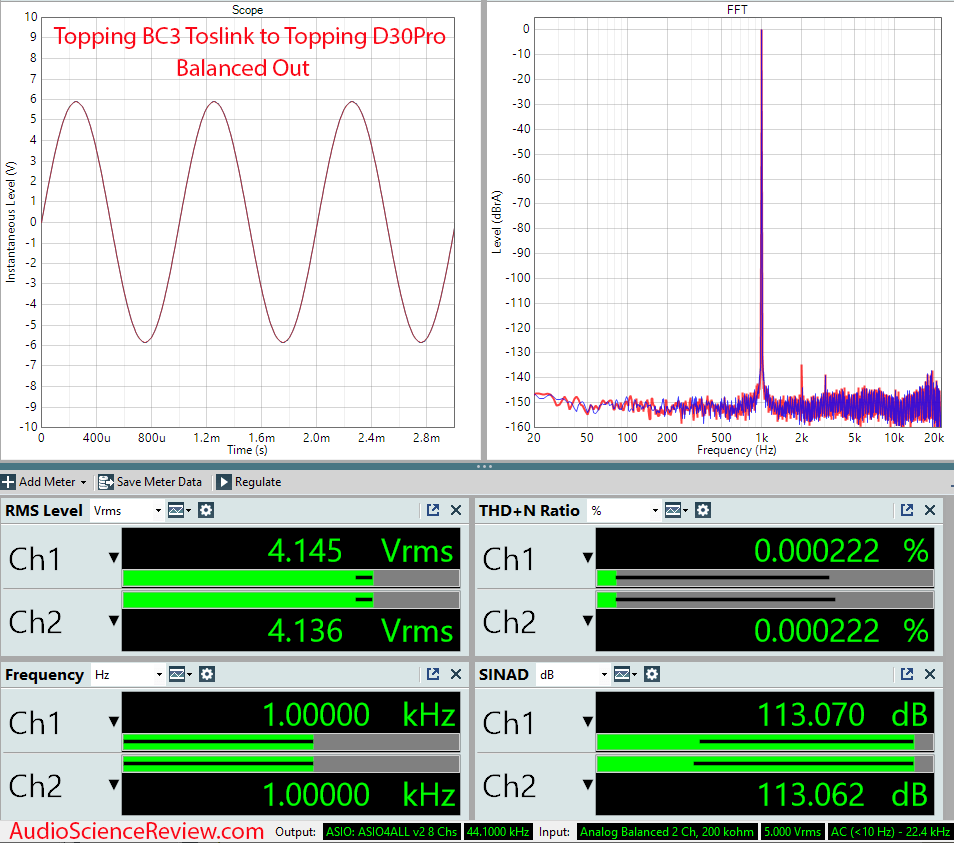 Hallelujah! We get state of the art analog reproduction despite using a wireless connection that started life for just voice.

Topping BC3 Analog Output Measurements
The DAC here is not a heroic implementation so we are going to get decent but not state of the art fidelity when using LDAC: 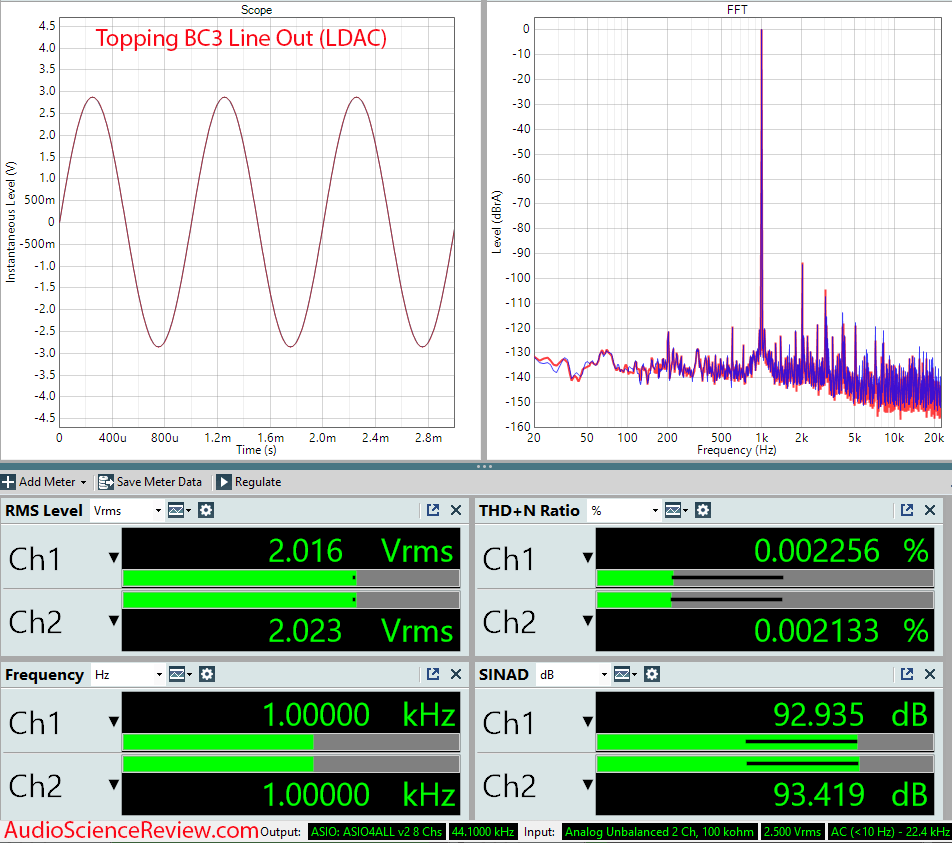 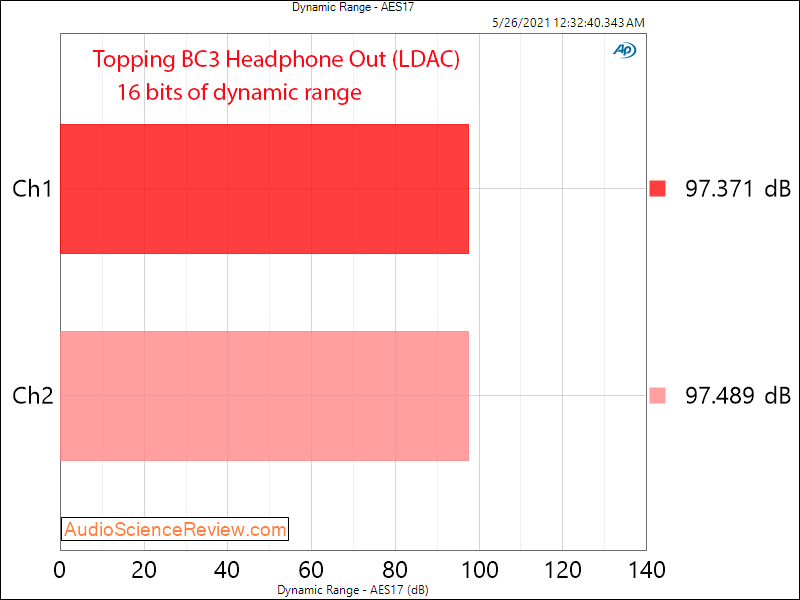 Headphone out is essentially the same as line out: 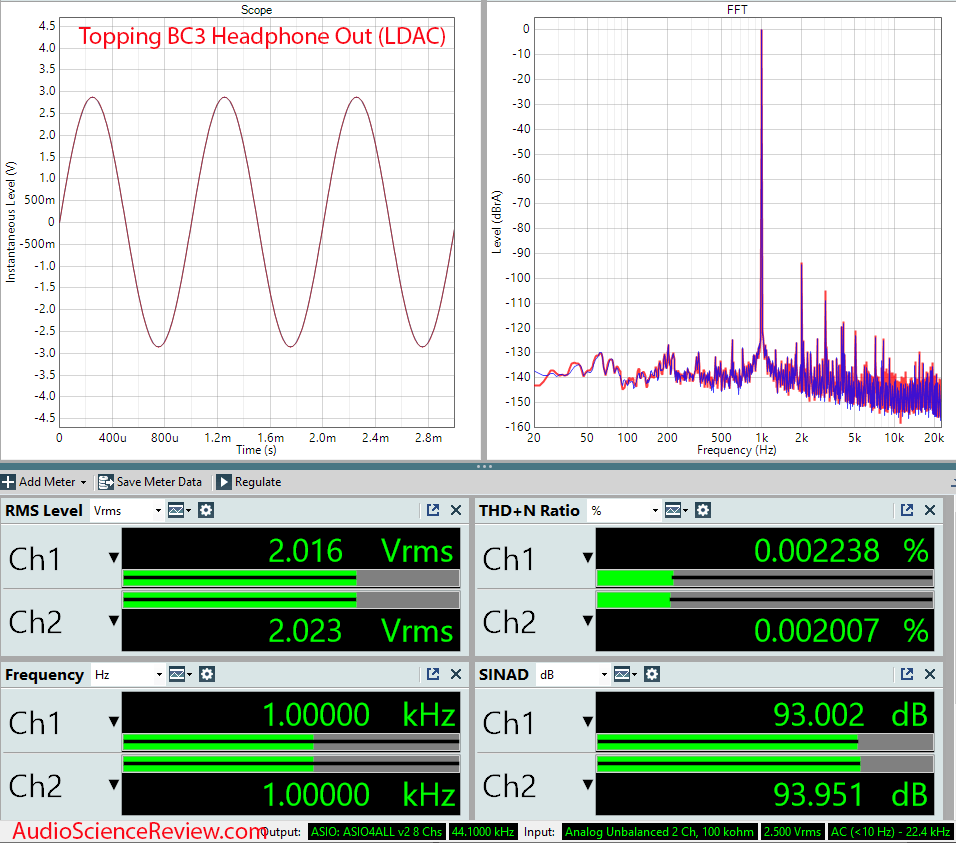 Here is an asynchronous frequency sweep comparing pairs of codecs: 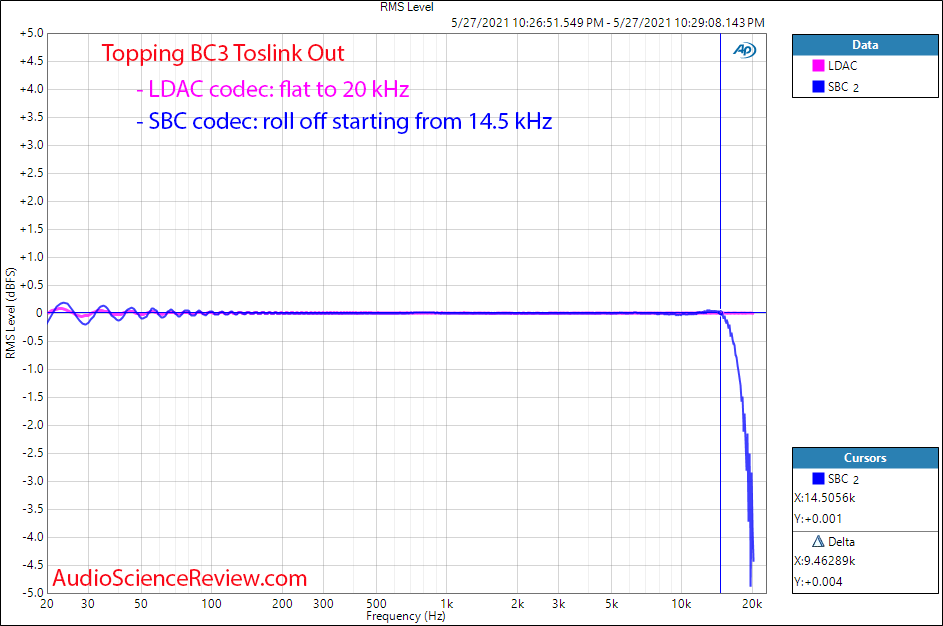 That is one nice and flat response for LDAC. SBC on the other hand is filtering above 14.5 kHz. This is done because high frequencies are much harder to encode due to their high speed variations (in sample value)/noise.

I was surprised that AAC was also filters above 15 kHz: 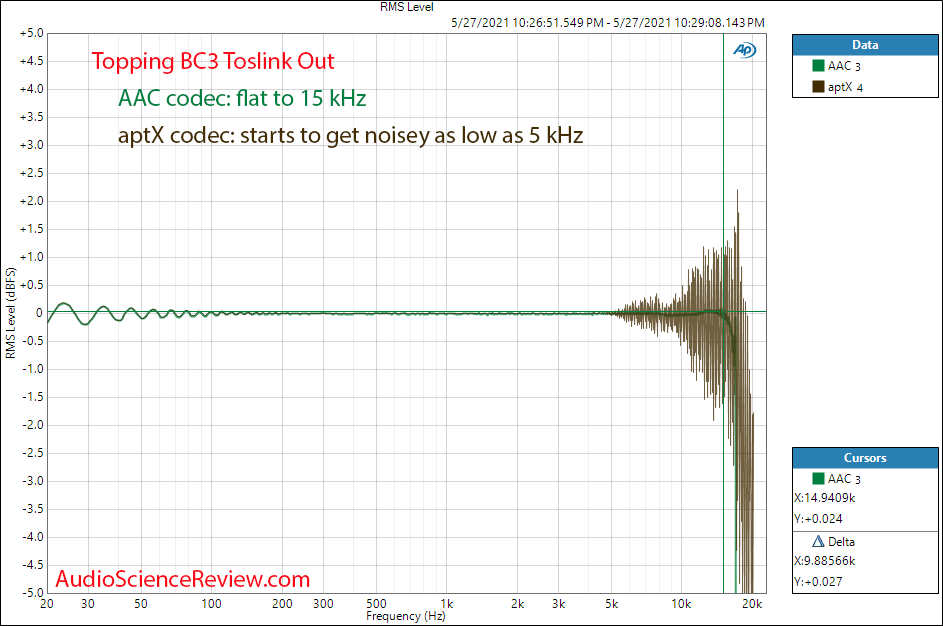 aptX as we saw earlier plays some serious games in treble.

This type of sweep also generates THD+N relative to frequency: 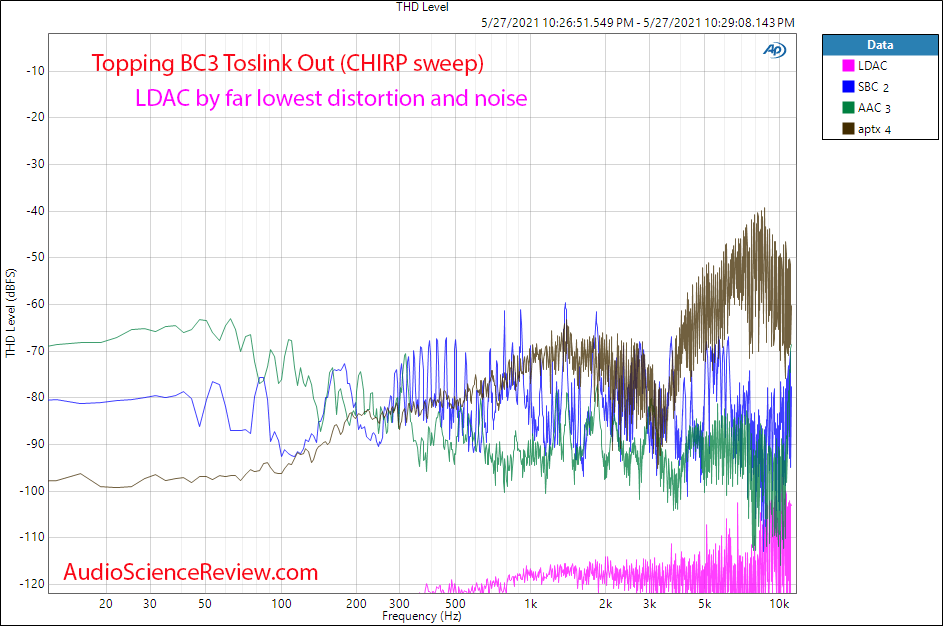 We see that LDAC continues to be the cleanest codec by far. Note that this is a dynamic sweep signal so more complex than a single tone that dashboard uses. The other codecs trade places in different parts of the spectrum and are generally a mess. aptX by the fact that it chops off high frequencies does better at very low frequencies.

LDAC Codec Licensing
Searching for LDAC lands you on the English translate of a site that is likely hosted by Sony Japan. In there we see the comforting mention of Topping as proper licensee of the codec: 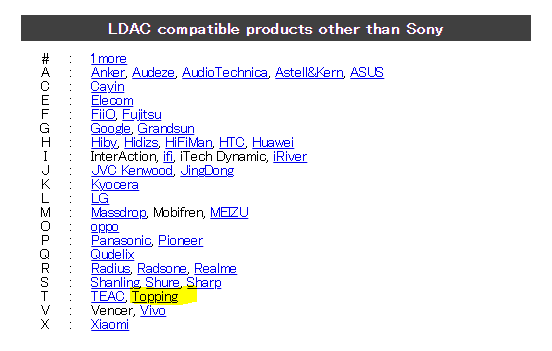 Earlier it mentions that the source code for LDAC is part of the Android Open Source. Don't confuse this with it being fee. You still need to license the underlying patents from Sony or they can come after you. What is involved in said licensing? Sony is unusually transparent about that: 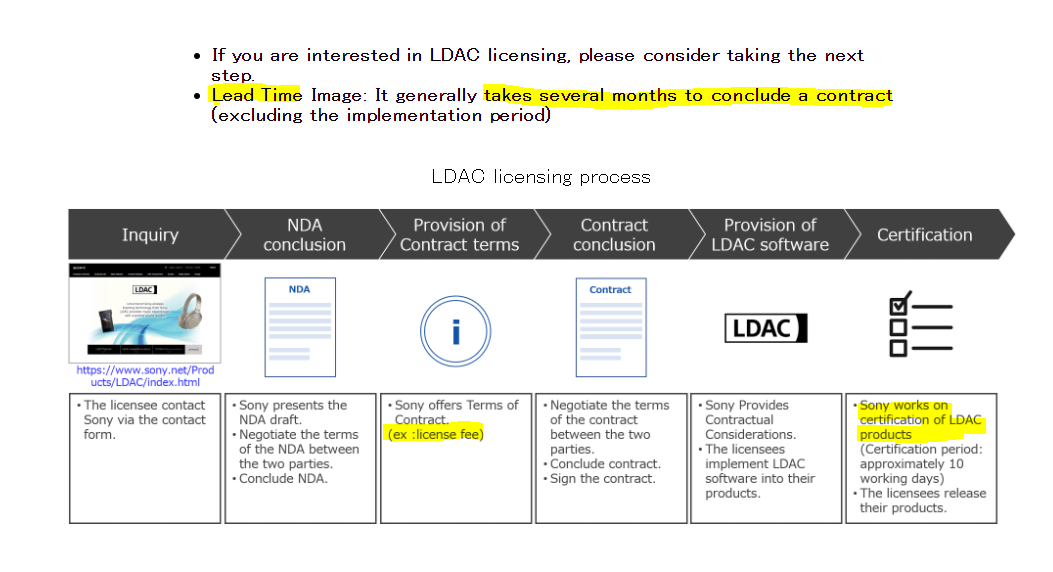 Predictably they expect you to spend months negotiating the NDA and actual license. Having been on both sides of such licensing, I can attest to this process being long and drawn out because the agreements likely start very one sided which you then kill yourself across countless conference calls to try to soften. Typical clauses are "covenant not to sue" meaning once you license this technology, then you can't sue Sony or their other licensees over any patents you may own. I don't know if such a provision is in there but I am guessing it would be. On NDA front you likely want to have a residuals clause meaning what you remember can't be unremembered. They will say you have to have a button to erase your memory if NDA is terminated.

And oh, after all the above you have to pay the license fee. I see no provision for RAND licensing (Reasonable and Non-discriminator Licensing), meaning everyone pays the same fee. Without it, a competitor to Sony could be charged much more money than a friend and thereby keeping a competitive advantage.

Did someone complain about MQA being bad? Welcome to the world of audio licensing!

LDAC Codec Range
I did most of my testing with the phone being a few feet from the BC3 receiver. I did however test to see if I could get performance to drop but could not even after I moved my phone some 20 to 25 feet (7 to 8 meters) away. I had the codec in adaptive mode by the way so it could have switched encoding rates but I saw no glitches to indicate it did so. Your mileage may vary of course depending on the implementation of Bluetooth transmitter in your device.

Conclusions
The previous Bluetooth receivers we tested suffered both from codec losses and less than optimal implementation of output DAC. Topping has the same limitation as far as codecs but since it supports LDAC, for simple signals at least, it eliminates that bottleneck. Its DAC implementation is what you expect: "good enough for 16 bit content." Fortunately with digital output you can connect it to your favorite DAC with balanced out and by using LDAC, you have a superb input path for Bluetooth.

I have not yet tested enough Bluetooth receivers to have a good calibration for what is good and what is great. Still, I was very pleased with the performance of the Topping BC3 and am putting it on my recommended list.

Stunning performance. I'll buy a container full and sell them with a CNC'd case for $$$!
How much power is on tap for headphones?
Mark text and then reply. It is great, trust me...

If this worked with Chromecast, I'd use the optical out and buy 3 of them. Need more multi-room dongles, fewer that are basic bluetooth like this.

That new panther is a good visual representation of "missing the mark" ... and also my cooking skills

The performance of this receiver (DAC and headphone out) is about what could reasonably be expected, it's not that expensive and just about clears the 16-bit hurdle, wich is the maximum of what most people are gonna ask of it. Compared to the other bluetooth receivers tested so far it seems like the best.
RME ADI-2 Pro FS, Focal Alpha 65 Evo, Dynaudio 9S
Denon AVR 2700X, KEF R5, Monolith 12" THX​
OP

MarsianC# said:
Stunning performance. I'll buy a container full and sell them with a CNC'd case for $$$!
How much power is on tap for headphones?
Click to expand...

It has 2 volt output so should be good. I can't do sweeps and such with Bluetooth.
Amir
Founder, Audio Science Review
Founder, Madrona Digital
Review Thread Rules
My Technical Background
My YouTube Channel

Wow, that Sony LDAC codec is fantastic! If only Apple would get over its not-invented-here mentality (just like Microsoft used to have) and license the standard for i-devices.
O

Fantastic! Thank you, more of these, please…
OP

Oukkidoukki said:
Fantastic! Thank you, more of these, please…
Click to expand...

Thanks. It was fun for me too discovering new things. I have another Bluetooth receiver to test as well.
Amir
Founder, Audio Science Review
Founder, Madrona Digital
Review Thread Rules
My Technical Background
My YouTube Channel
A

Looking forward for the iPhone AAC test because that is all what us Apple bleeps get to use.
O

Thanks for the additional insight on LDAC licensing.

So, is this a good alternative to Chromecast Audio?

Excellent, I respect Topping engineering immensely, amazed . Well done Sony, I was being skeptical till now .
An audio purist, not really an audiophile

Looking forward for the iPhone AAC test because that is all what us Apple bleeps get to use.
Click to expand...

Seems like they may fix that soon. I'll bet they make an proprietary codec for their new lossless streaming capabilities and re-release their headphones and earphones at a markup.

daftcombo said:
So, is this a good alternative to Chromecast Audio?
Click to expand...

This is a bluetooth receiver and doesn't do any wifi/multi-room stuff like the Chromecast audio does.

Thanks for the write up, great to see you testing more BT devices and getting to discover these codecs implementation and limitation.

I own a Topping BC3, It's a unique and well thought out , brilliant little device. Toslink , fantastic battery life, good reception.

I use mine exclusively connected to an ifi Diablo via toslink, using LDAC through Deezer on mobile and APTX LL for tv / movie watching.
B

https://www.amazon.com/dp/B07NQ87RVT/ref=emc_b_5_i
You must log in or register to reply here.

Curiosity question: What is "worse"... audio playing through AAC Bluetooth codec or having the audio upsampled to 48kHz?