Review and Measurements of Auralic Gemini 2000 DAC and Headphone Amplifier 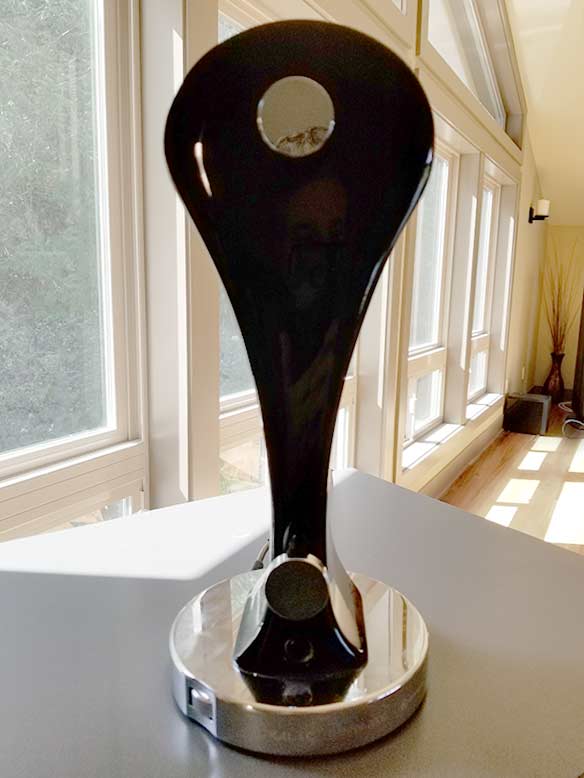 The retail price is US $1,200. Seeing how Klutz charges $550 for its base alone, this is not an outrageous sum for a unit that adds the DAC and headphone functionality and with it, remove a lot of clutter from your desk.

Looking at the slick website and the picture of the PCB, I was salivating over its design: 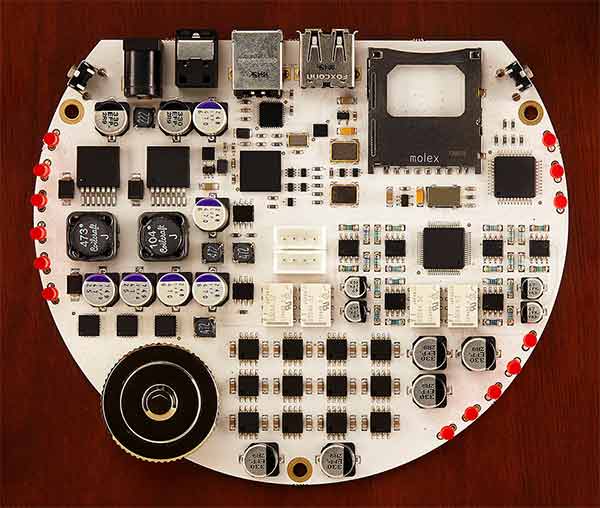 This is a great use of white solder mask/silk screening of the PCB. You could literally eat off of the thing!

The unit sports USB, Toslink and some phone input I did not bother to test. Output amplifier is class A which I suspect is powered by the bank of surface mount transistors (?) at the bottom of the unit close to the volume control.

The unit is UAC 2 class compliant meaning it was plug-and-play with my laptop running Windows Creators edition with no need to install anything. I did have to put Roon in push mode as event mode did not work but I have to do that frequently.

The unit strangely comes with a Toshiba 19 volt laptop switching power supply! The advantage of it is that gobs of DC power is available to the unit which it puts to "good" use by cooking its base! The unit can get borderline too hot to touch including its volume control! Here is a thermal shot of it prior to really getting hot: 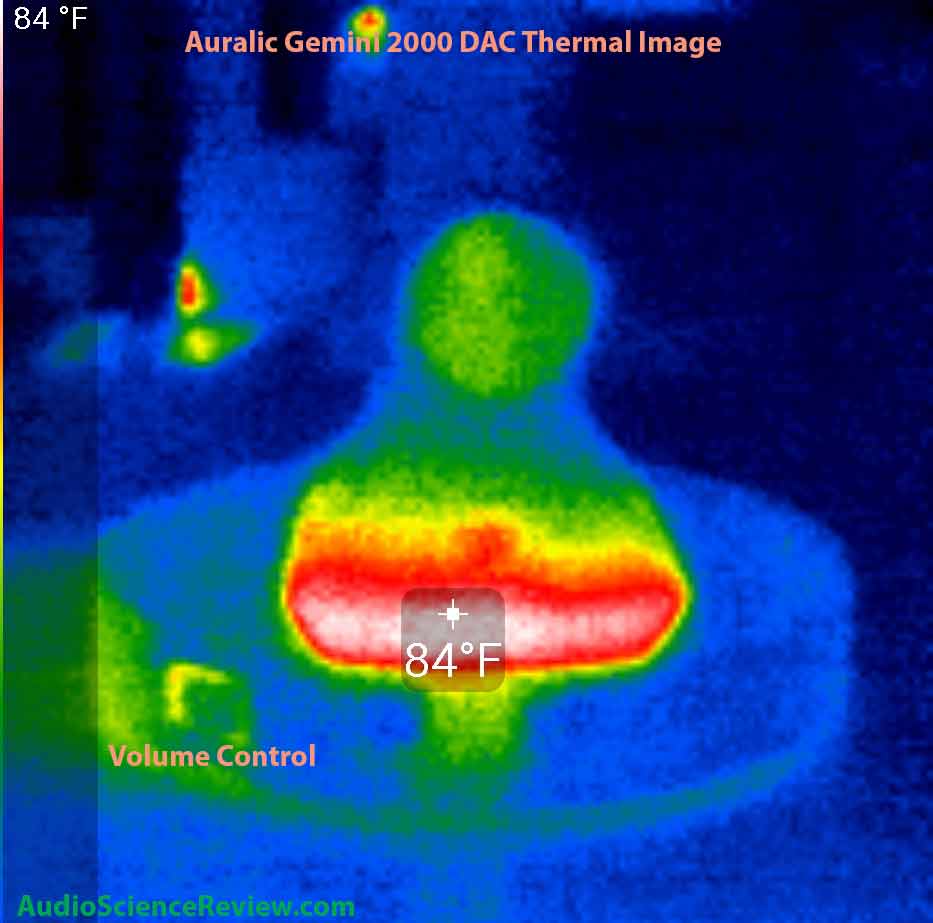 It is showing the concentration in the vertical shaft but that is false as it is the base that gets super hot (silver reflection is likely fooling my IR camera). You can however see the volume control starting to get warm.

For output there is a single 1/4 inch TRS headphone jack. I had a bit of trouble with some of my plugs not making a secure connection. Not sure whether this is a single sample issue.

No double you are interested in its measurements so let's get into that. If you are not familiar with my measurements, I suggest reading my tutorial on audio measurements here: https://www.audiosciencereview.com/forum/index.php?threads/understanding-audio-measurements.2351/.

S/PDIF Measurements
I did most of my testing with S/PDIF since that allows a lot more automation and easier measurements. I will show a USB measurement in the next section.

Let's start with test of frequency response and channel balance based on volume setting: 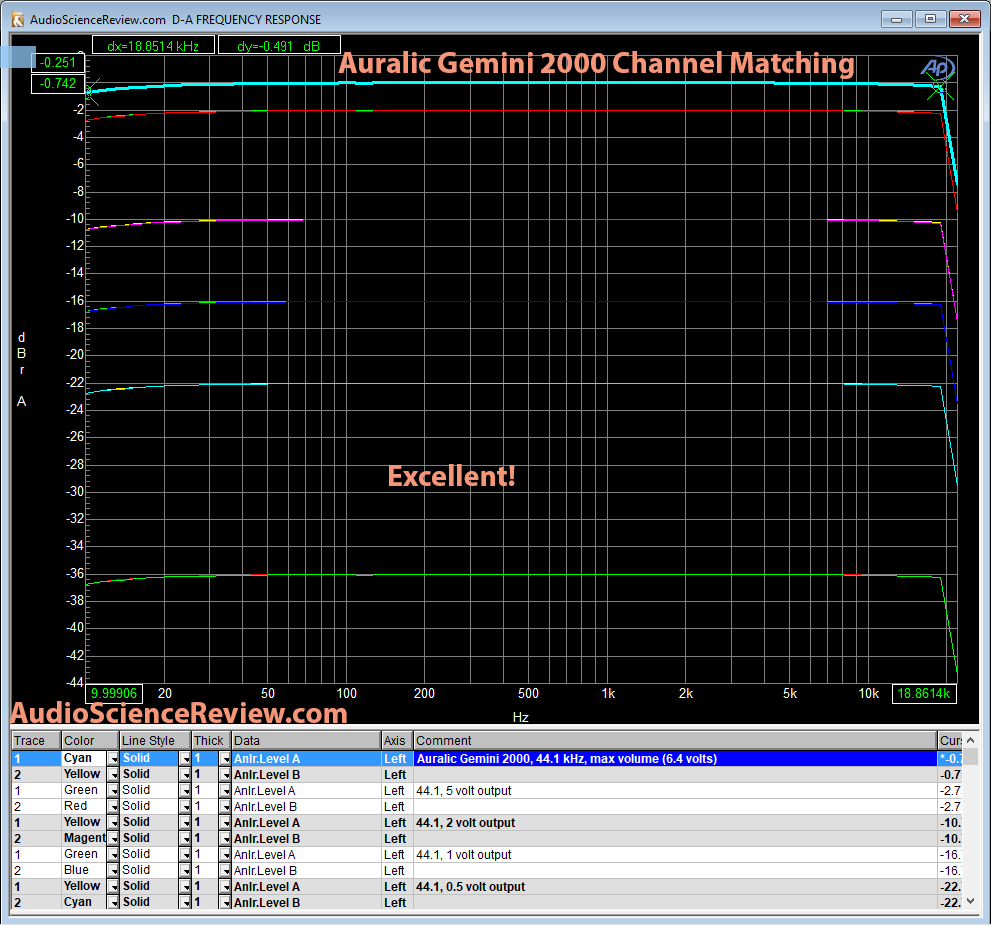 As you see, channel matching is superb and probably the best I have measured. The reconstruction filter in the DAC starts a bit early in rolling off the high frequencies (around 18.6 kHz as indicated). For us older folks, not an issue. There is also a bit of low frequency roll off but that is below 20 Hz so is fine. 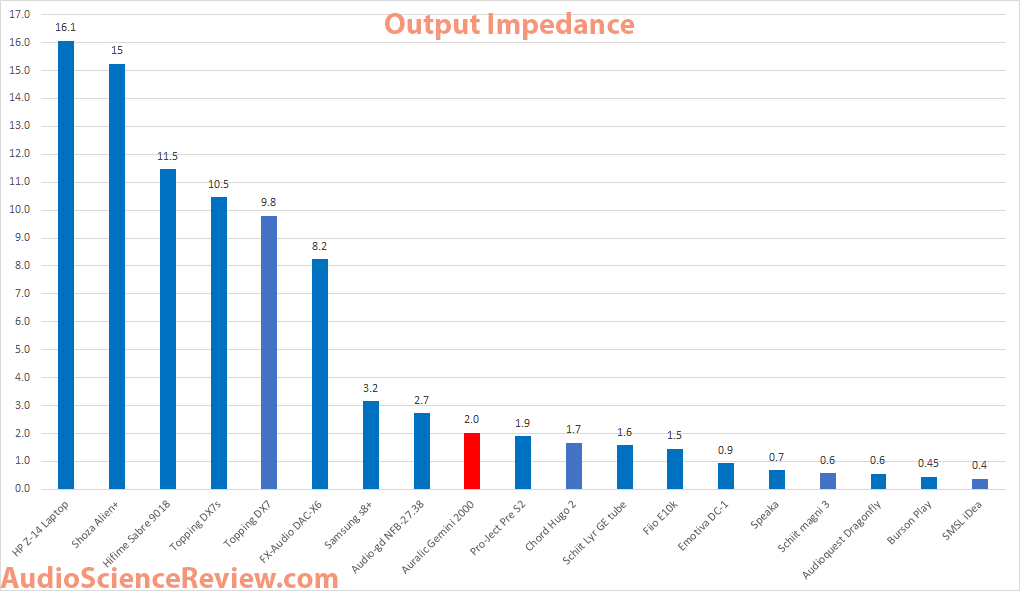 While not the lowest I have measured, it is still good to drive just about any headphone. Output voltage at max level was a healthy 8.6 volts RMS or so! I will show headphone power measurements later. For now, let's dig into the DAC portion starting with noise and jitter. Remember again this is Toslink input: 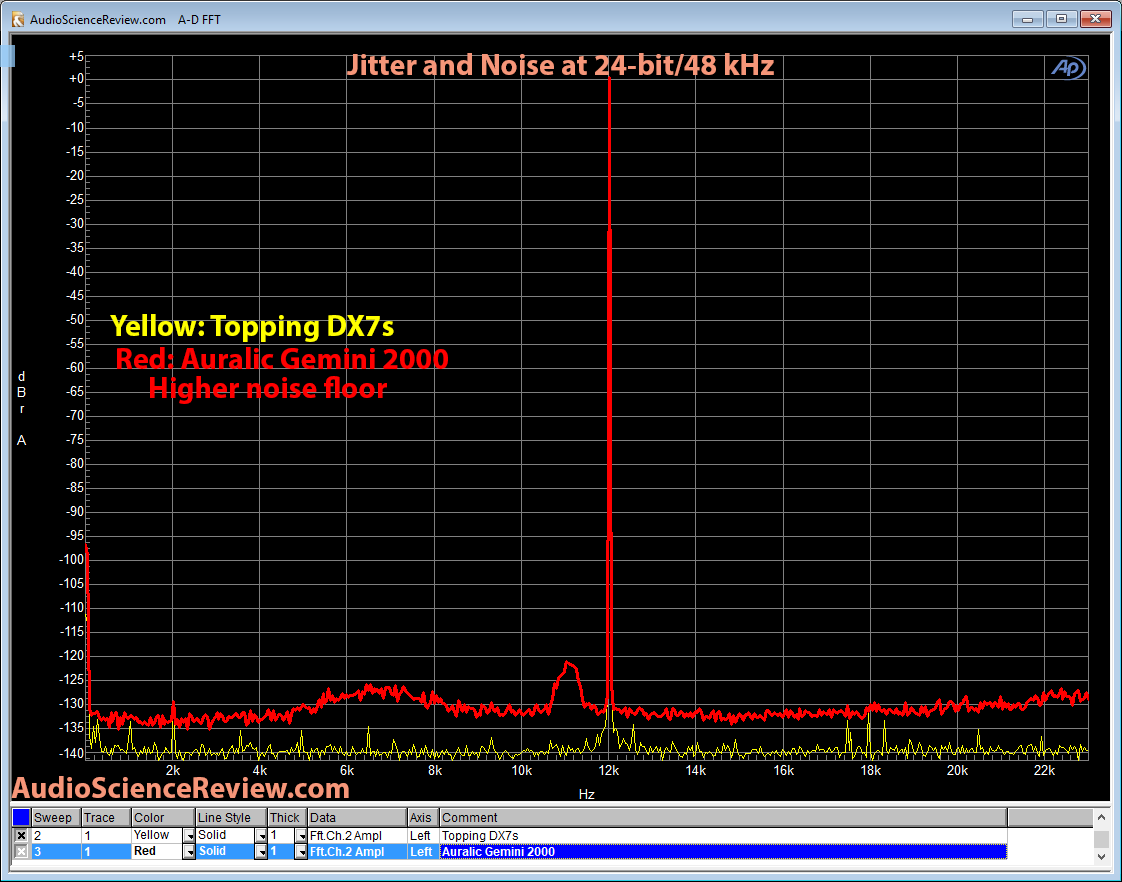 Ah, kind of disappointing to see higher noise floor than Topping DX7s. It is mostly noise so pretty benign but still, not good execution.

Let's look at linearity and see if the noise hurts it there: 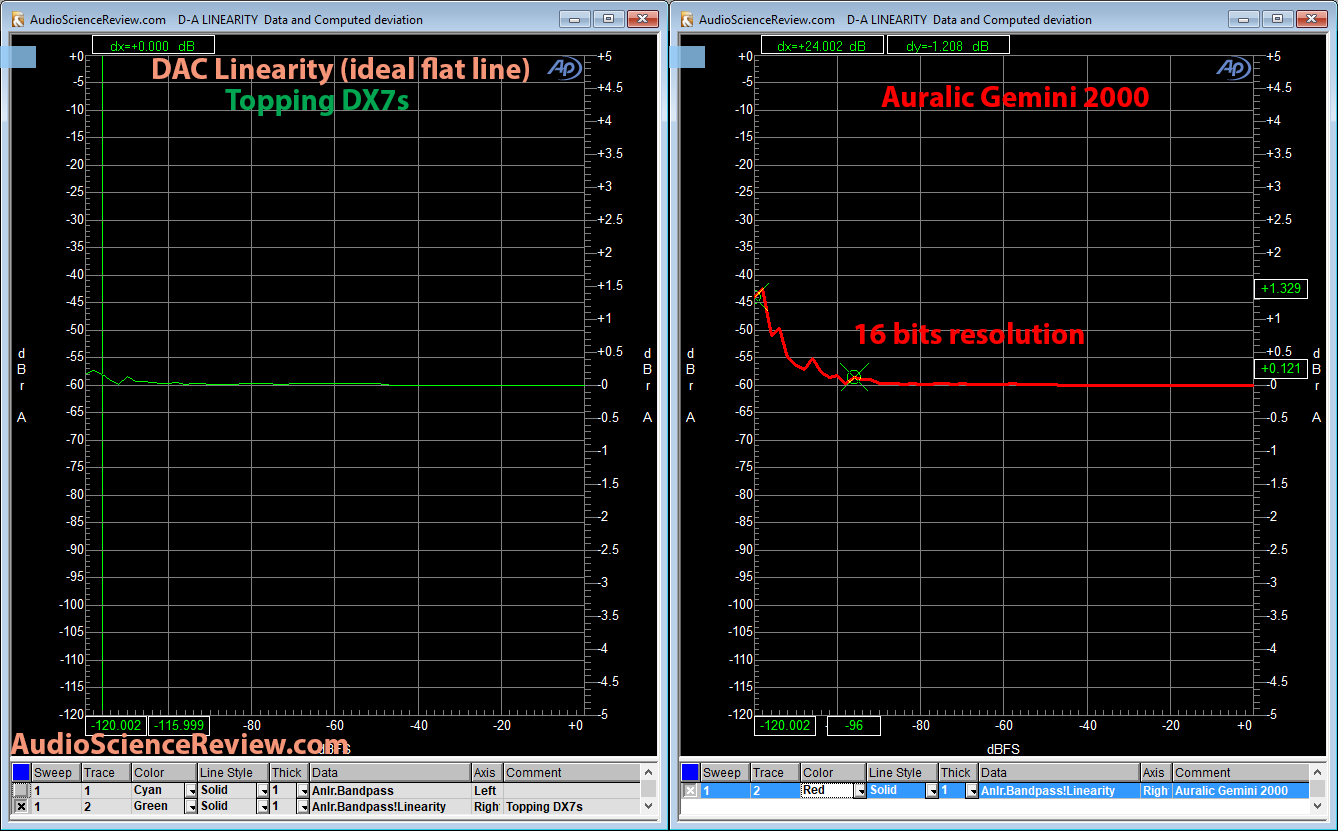 And it does. Nothing awful but beyond 96 dB/16-bits, we start to lose accuracy. Same issue shows up in -90 dB low amplitude sine wave, matched to the output level of Topping dX7s: 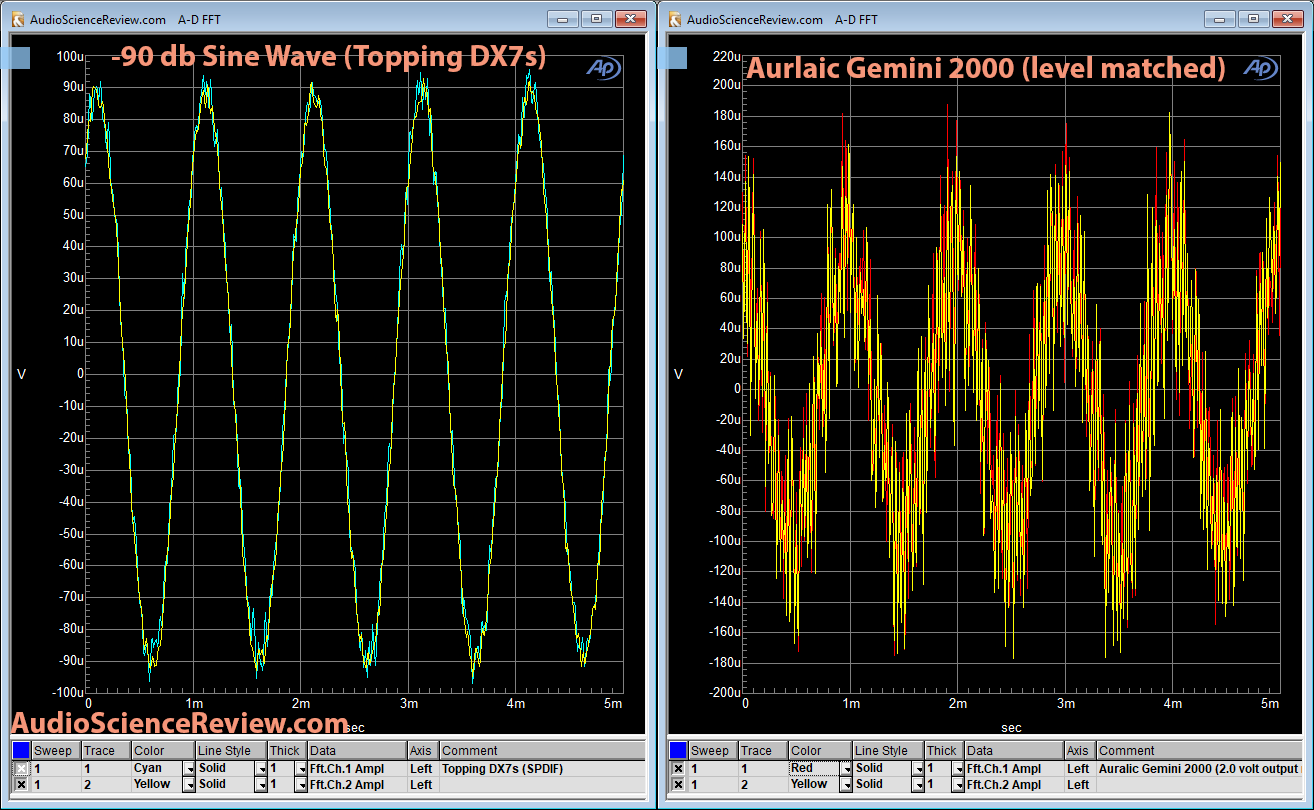 Not a good showing at all. Note that if I max its volume, the graph significantly improves but it sill does not get as clean as Topping DX7s or other high-fidelity DACs I have measured.

Let's look at residual noise and distortion from a 1 khz tone: 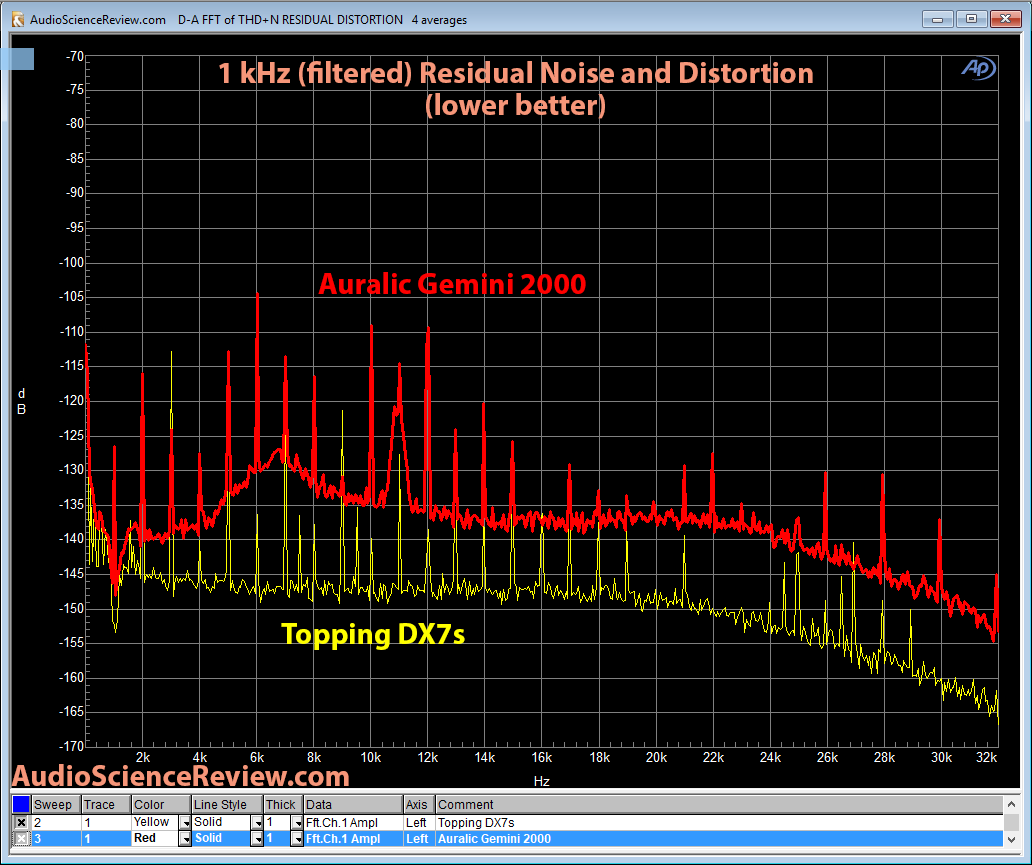 So it seems there is no escaping of additional noise and distortion here. Again, levels are low (-105 dB worst case) but not textbook perfect as I like to see. 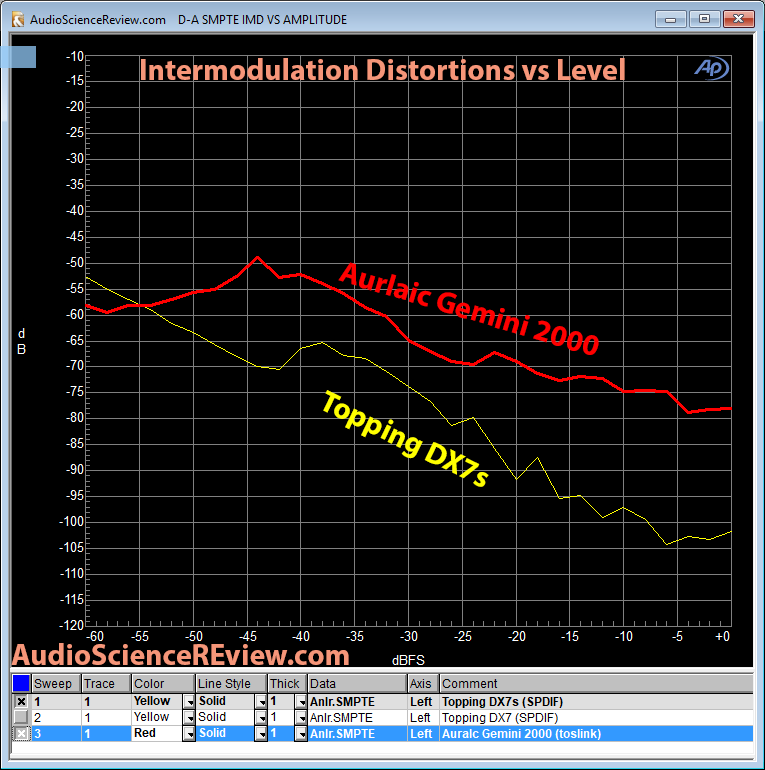 THD+N does the same: 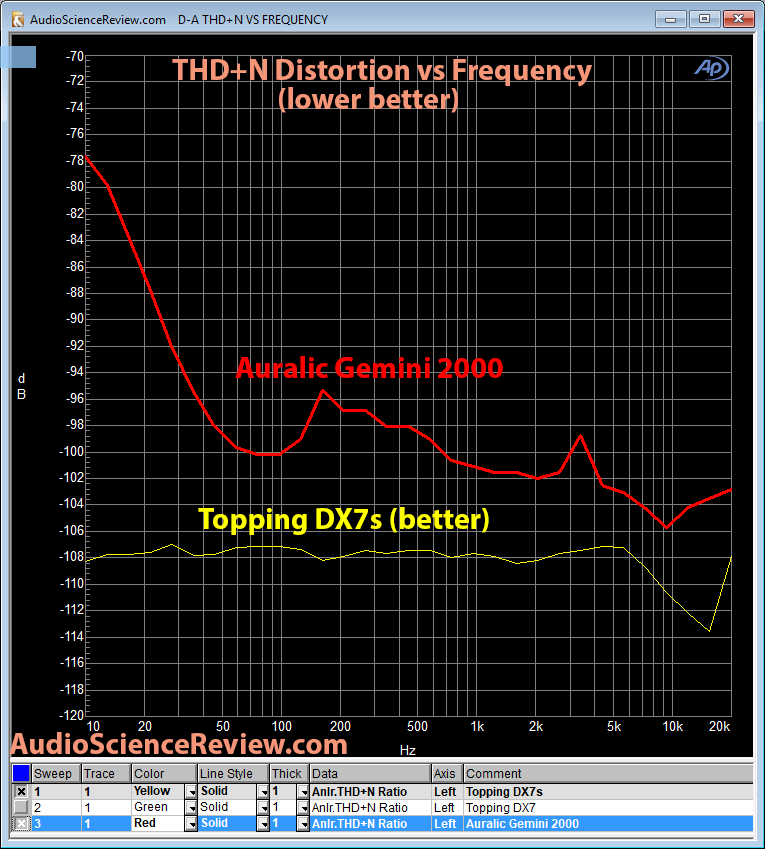 Something is up at those low frequencies that should have been investigated.

I think you get the picture. Let's test USB and see how that does.

USB Measurement
A quick touch test here shows that USB is no better, and indeed, it is worse than Toslink: 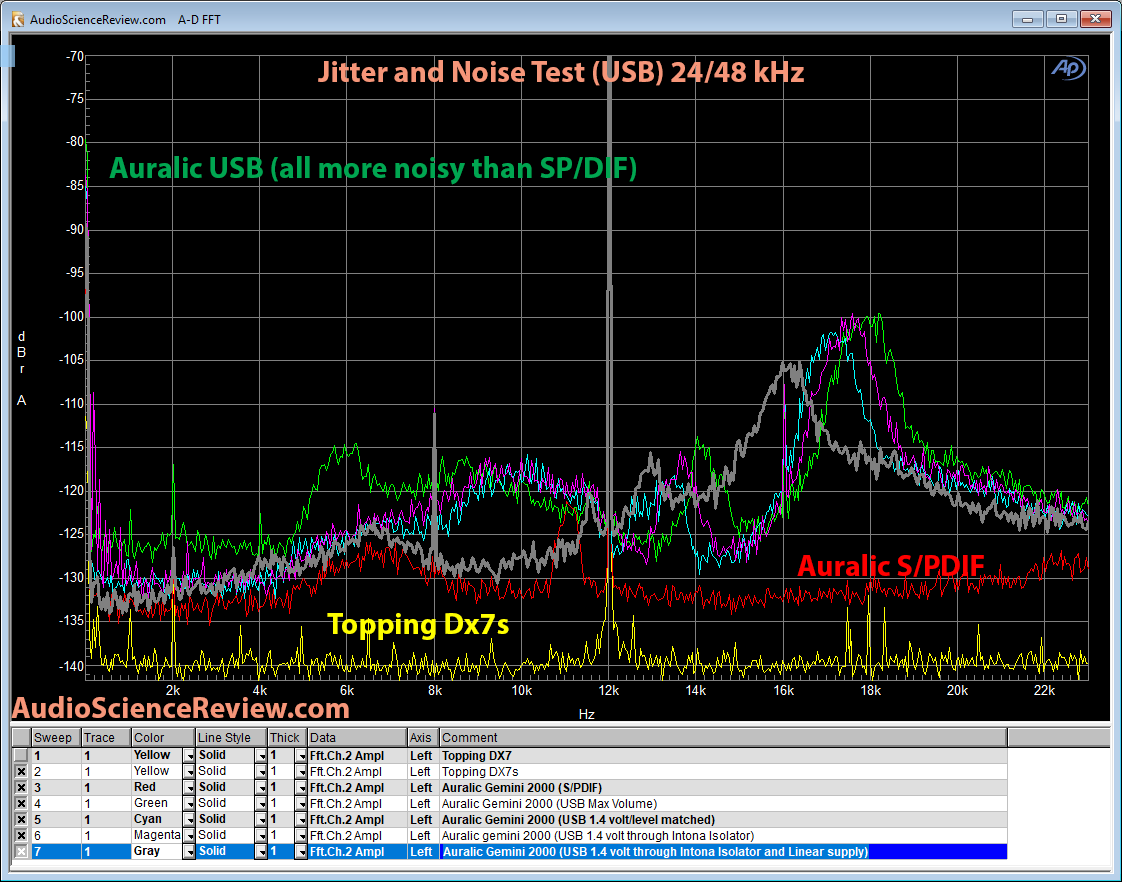 I tested the unit with its own supply, then with Intona USB isolator and that combined with a linear power supply built by the owner. As you see, in all cases performance is worse than S/PDIF and certainly that of Topping DX7s. Note that the above graph is zoomed in vertically to show the differences better.

I did not do more tests but I think the conclusions are clear that the DAC portion is not textbook clean.

Headphone Amplifier Measurements
I have been working on my headphone measurements trying to make them more clear and useful. To that end, I have reduced the number of loads I test as to keep the iterations from going nuts. Comparisons are to the Topping DX7s headphone output which I had not posted before. All of these measurements are side-by-side, i.e. measure Auralic and then measure Topping (the ones above from previous run). 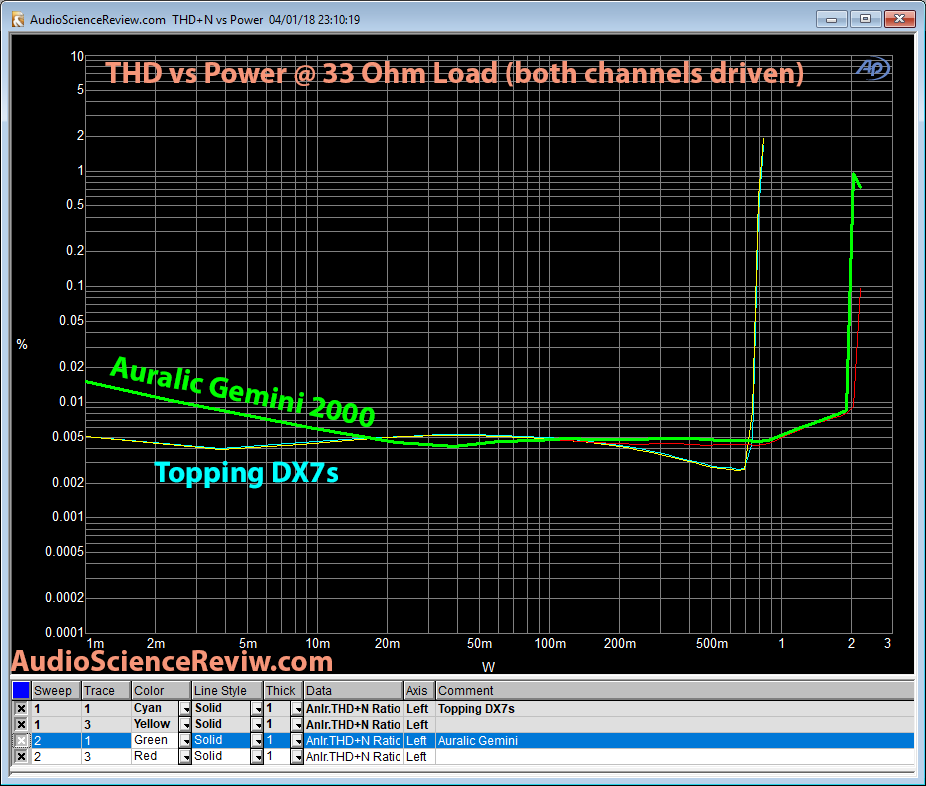 We see the higher noise floor in Auralic at lower amplitude but then the two are evenly matched. The Topping runs out of power around 0.7 watts whereas the Auralic nicely keeps going to 2 watts which I believe is the stated spec. 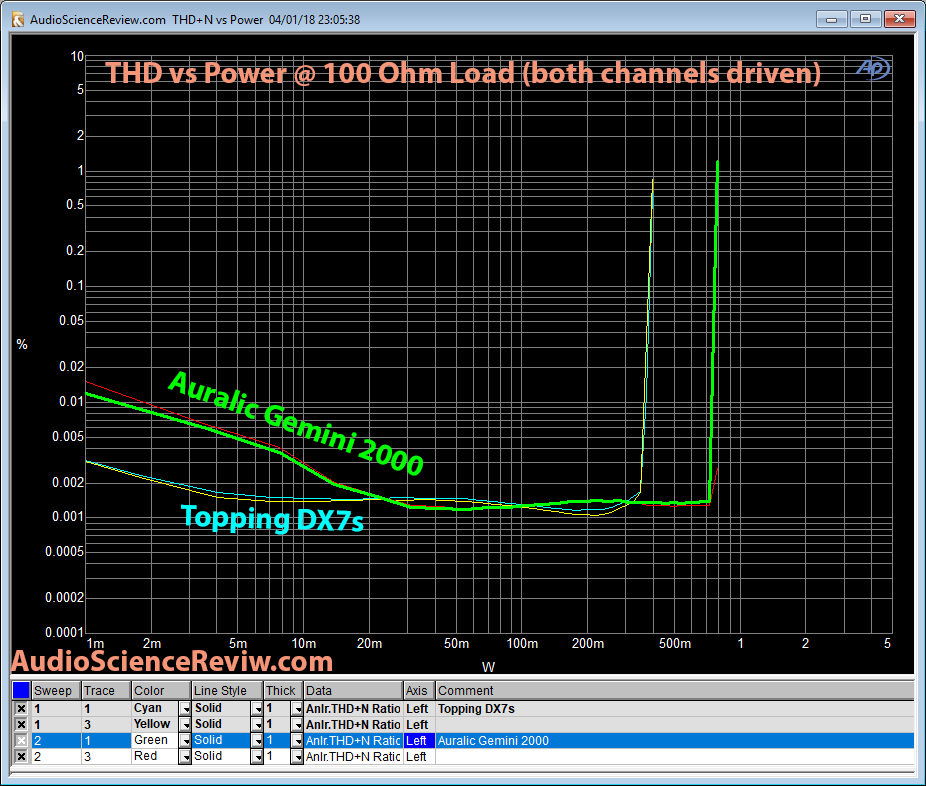 Similar performance but with obviously different levels of output power. 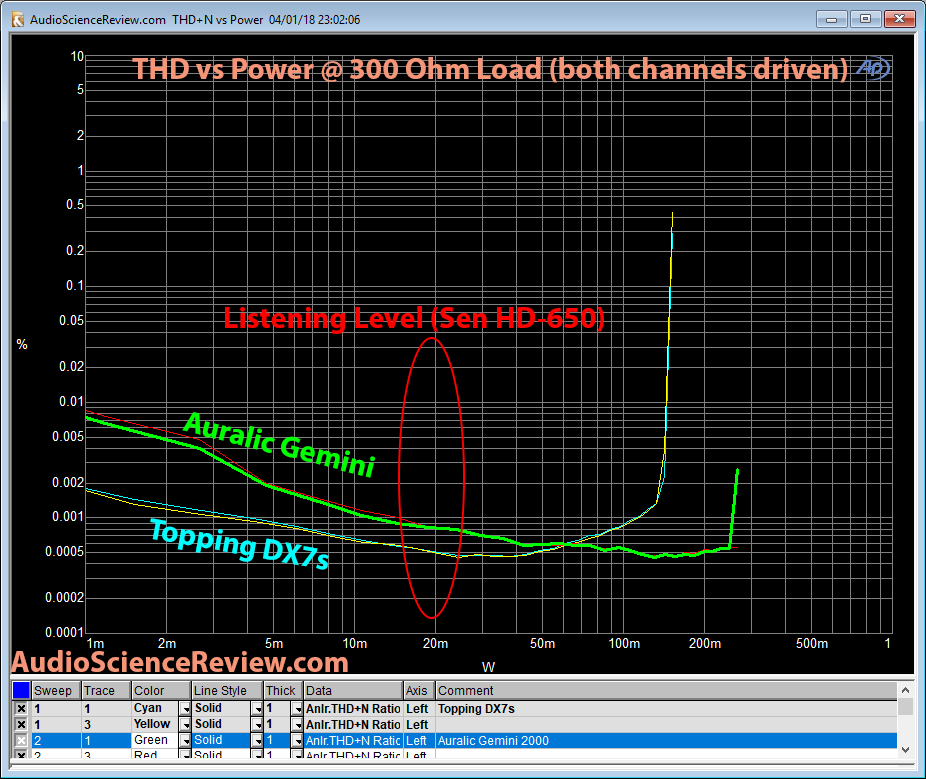 Here the noise difference is more pronounced. Importantly I have circled the comfortable/somewhat loud level I tested the two units in my listening tests with Sennheiser HD-650 headphones (see next section). There, we see a slight advantage to Topping DX7s with no need for extra power of either unit.

One thing I like about Auralic is how it doesn't try to keep producing higher and higher outputs at more distortion. It essentially stops at at the onset of clipping.

Listening Tests
I matched levels between the two units using a 1 kHz tone and then listened to a variety of music. The two units were exceptionally close. I thought at times the Auralic Gemini 200 had maybe a bit more highs. But this was not a reliable difference across all content.

Importantly both sounded superb not just with the Sennheiser HD-650 but the rest of the headphones I tested (Sony MDRV6, Hifiman HE400i, Grado SR60e). I also used my very sensitive KZ IEMs to test for noise when on pause and heard nothing in either unit.

Conclusions
The DAC portion of the Auralic Gemini 2000 comes up a bit short in measurements. With some $500 retail budget to produce that and headphone amplifier, they should have done better. The headphone amplifier however, is extremely good. It has plenty of power while keeping distortion and noise in check. Given the fact that the issues with the DAC portion don't seem to be audible, I am going to give a positive recommendation to this unit. Hopefully there is a 3000 version with a more perfect DAC!

As an aside, I was most impressed with how well the Topping DX7s did. Its higher output impedance did not seem to impact the sound in any meaningful way. I need to do more testing but I may need to revise my past recommendation for other headphone amps for low-impedance headphones. The unit may be good as is!

amirm said:
Given the fact that the issues with the DAC portion don't seem to be audible, I am going to give a positive recommendation to this unit.
Click to expand...
How high would the IMD need to be before you would consider it potentially audible?
If you own more than seven things, the things own you.

when is coming the mojo review? been waiting for weeks
OP

I saw the stereophile review of the auralic vega and was expecting a good dac. That's a shame.

BE718 said:
My measurements here
https://audiosciencereview.com/forum/index.php?threads/measurements-of-chord-mojo.2434/
Click to expand...
thank you, I was in between topping d50 and chord mojo, went for mojo finally
OP

flipflop said:
How high would the IMD need to be before you would consider it potentially audible?
Click to expand...
As a number, it is hard to determine. Its spectrum would be a lot more useful in that regard. Alas, it is impossible to show two DACs at the same time that way and hence the reason I don't show that.

Its use here is to show if one device is much less linear than the other. To the extent the gap is large, we can say one is better engineered and has higher fidelity. Conclusions beyond that hard.
Amir
Founder, Audio Science Review
Founder, Madrona Digital
Contributing Editor, Widescreen Review Magazine
Click for My Technical Background
Master List of Audio Reviews