This is a "half" review of the Mytek AMP+ stereo class D amplifier. I say "half" because one channel is broken in it. After consultation with the owner who kindly sent it to me, I decided to measure the working channel since the company says it is a "dual mono" configuration. The AMP+ costs US $2,500 from the company.

It is amazing how small Class D amplifiers are as Mytek has managed to stuff it in the same box as their desktop DACs! 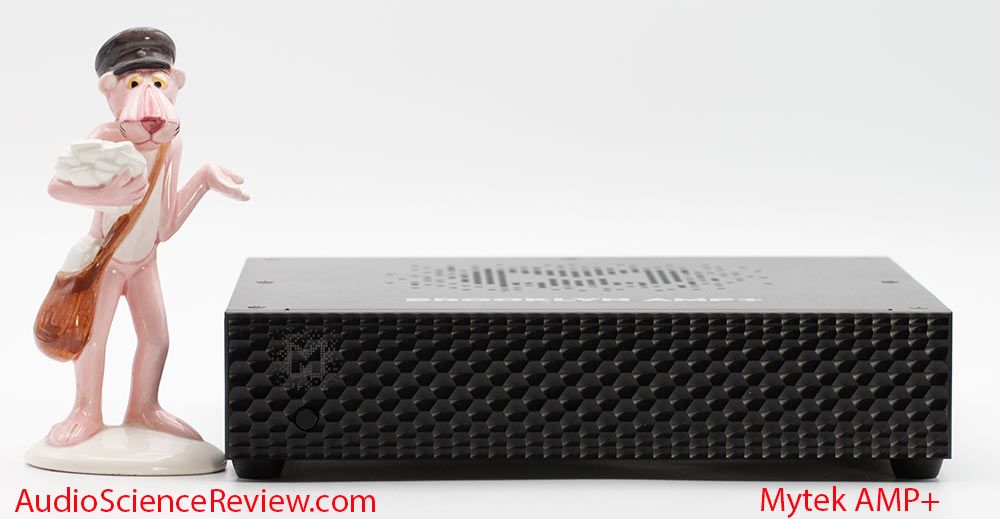 The "M" logo lights up all around it in blue when you power it on and gets brighter when you push the power switch in the front. The back side has what you expect:

Speaker terminals are close to each other so a bit hard to get heavy cables into them but you can manage.

The unit supports bridge mode so I thought maybe that was activated and was the reason one channel was not working. Went to find the manual and it was very difficult. Eventually I found one on their European site. The switches are all in off position which should not have put it in bridged mode. There is USB input for their control app which I downloaded. That was for not as it did not find the amplifier. Windows complained about the USB device not having the driver or some such thing. There is a switch that enables that but that didn't make a difference.

And yes, I tried RCA input as well and the dead channel remained dead. I swapped out the AMP+ for another to make sure it was not my instrumentation/wiring. The other amp worked like a charm. I left the unit on and that didn't make a difference. Left if off overnight and tested today and the dead channel, you guessed it, remained dead. Put my nose close to the vent but could not smell anything burned. My guess is that input is disconnected from the main power board as I could see some amount of signal being amplified by the dead channel. 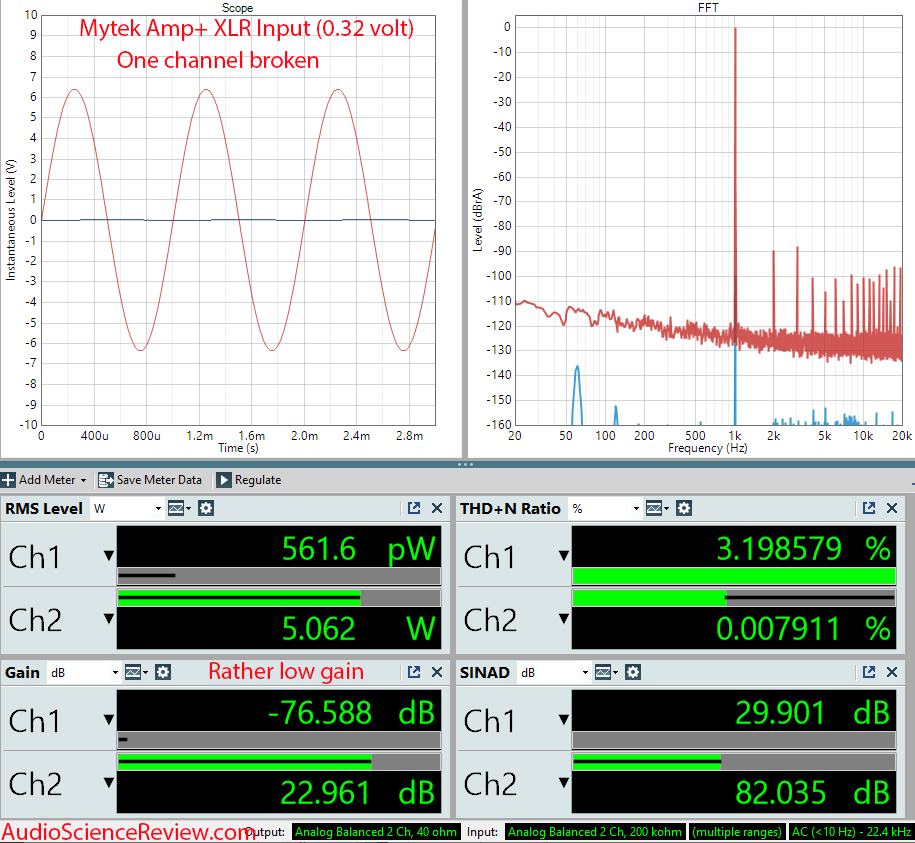 Distortion rises to high 80s. Add some noise and it drags SINAD down to 82 dB which is a bit above average: 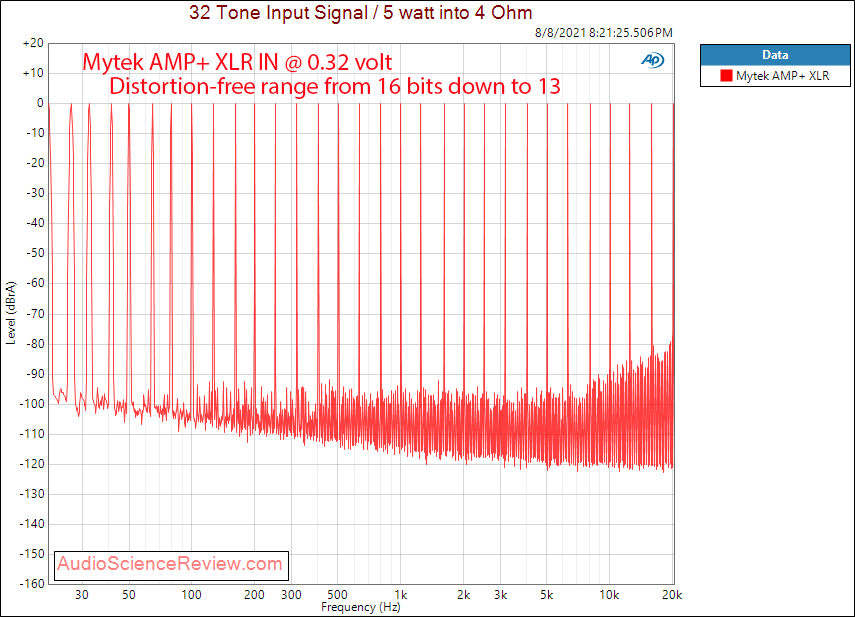 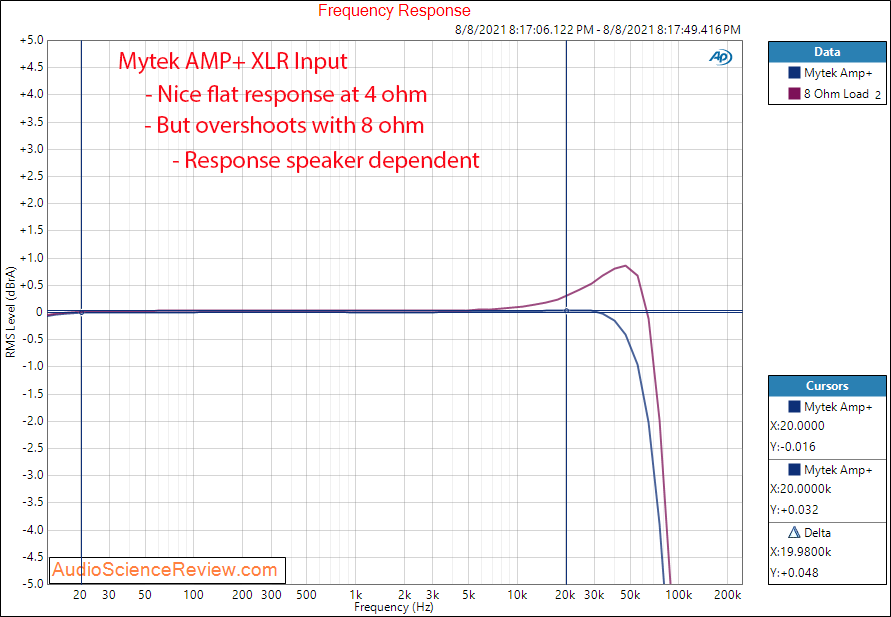 Sadly, switching to 4 ohm changes the frequency response so the amplifier response is speaker load dependent. Best in class amplifiers put the feedback loop around the class D output filter as to eliminate or lower its impact. Not so here.

Signal to noise ratio is not great at 5 watts but is reasonable at full power:

You can see how the broken channel attempts to produce some output. 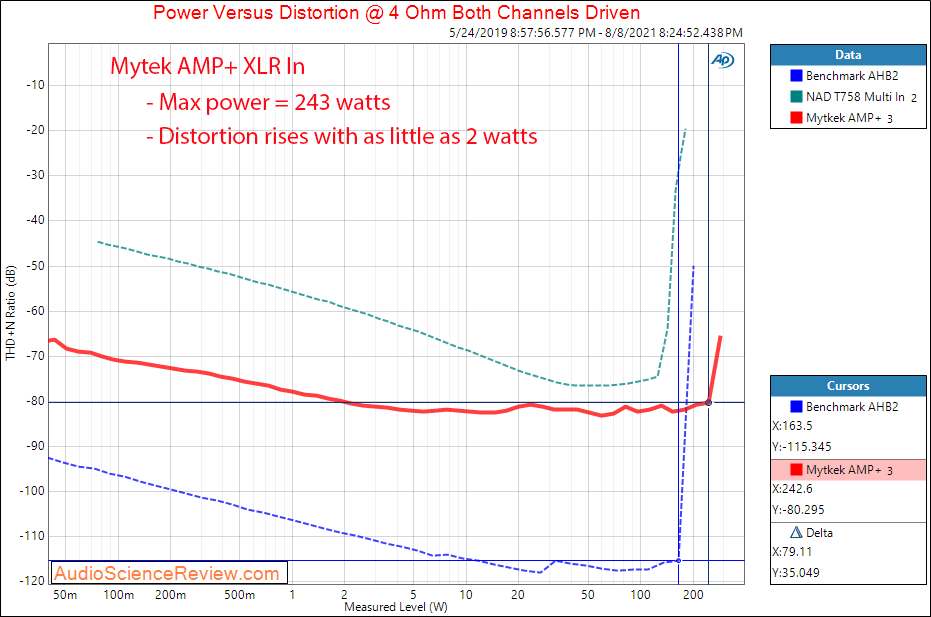 That is decent amount of power but I don't like how the curve flattens very early meaning distortion takes over noise. With very low distortion amplifiers, the line keeps going down until at or near clipping as you see in the both references provided. The AMP+ doesn't do this due to rising distortion very early on.

Same is true with 8 ohm load: 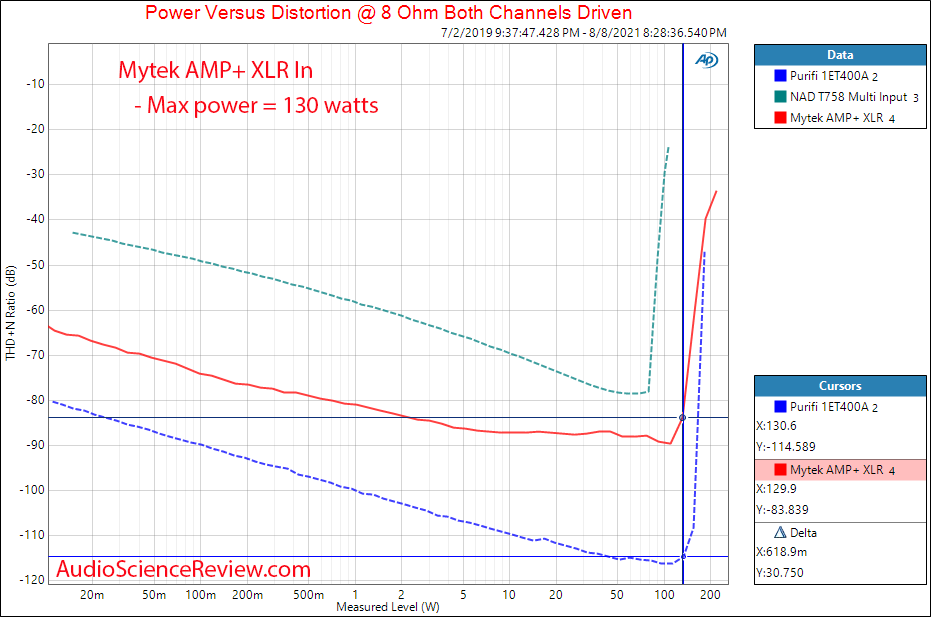 There is more power available if we allow distortion to rise up to 1%:

Strangely the peak/burst power is not as high. Had not seen this before. Usually with regulated power supplies in class D amplifiers, burst mode produces the same power as max but not less. Anyway, it is not much of a difference to worry about.

Testing for frequency dependency, we see rather organized set of curves indicating no wild non-linearities: 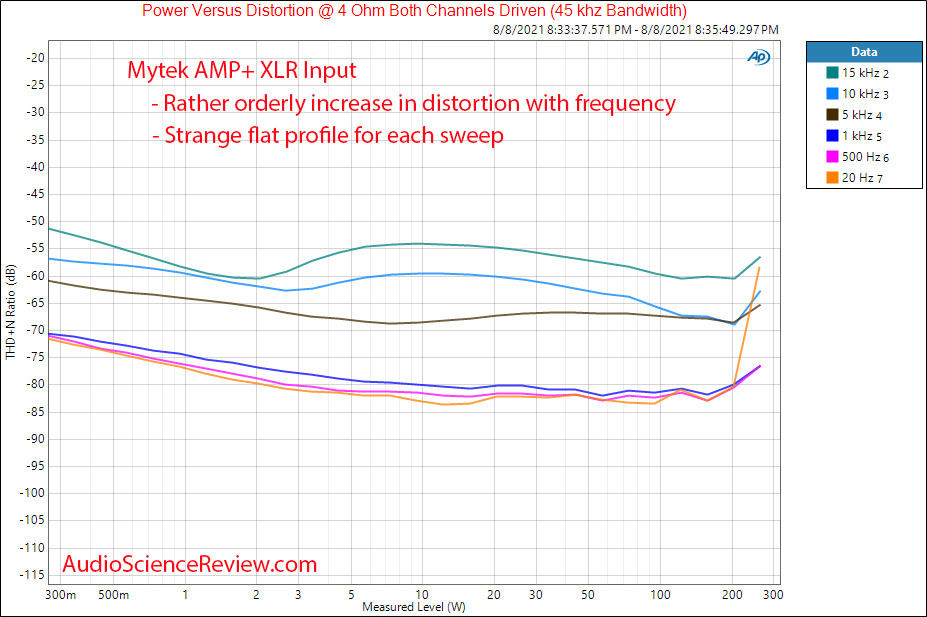 Then again the primary distortion mechanism is high enough to obscure any secondary sources.

I was pleased to see the switching frequency is nicely attenuated: 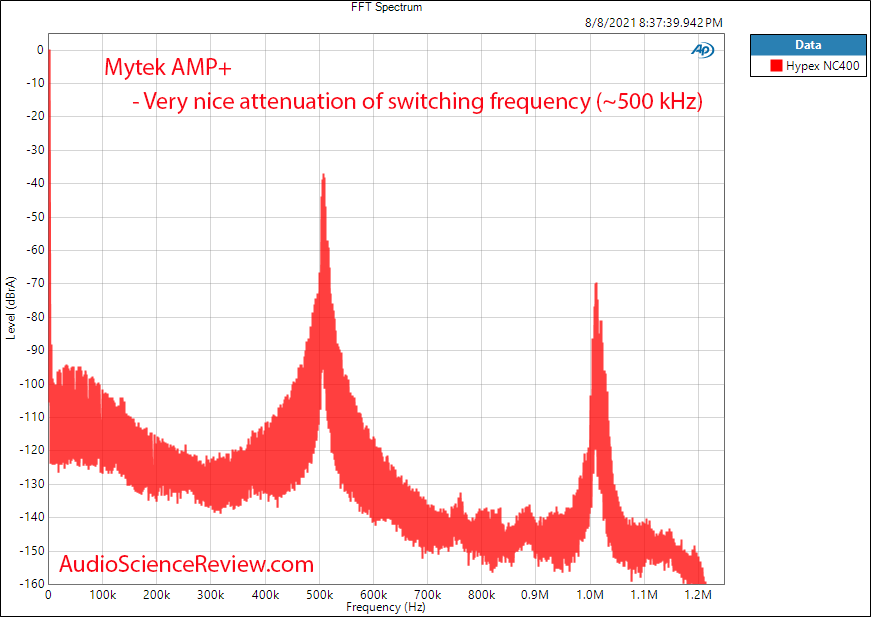 Some amps reduce that to just -10 dB or so but here we have nearly 40 dB which is nice.

Conclusions
I admire the small and cool running amplifier here. Other than that though, performance is middling and nowhere near state of the art in class D amplification which you can get for these prices, albeit probably from lesser known companies. Reliability is a worry. Reading about it, there were some strange comments from the company in forums that some European contract manufacturer had produced faulty units that were literally going up in smoke. The changed manufacturing and supposedly the problem is fixed. I think the owner said he had sent his in for repair and this was the replacement unit or something like that. Doesn't inspire confidence.

I am not going to recommend the Mytek AMP+. It is too expensive for middle of the road performance with potential reliability issues. 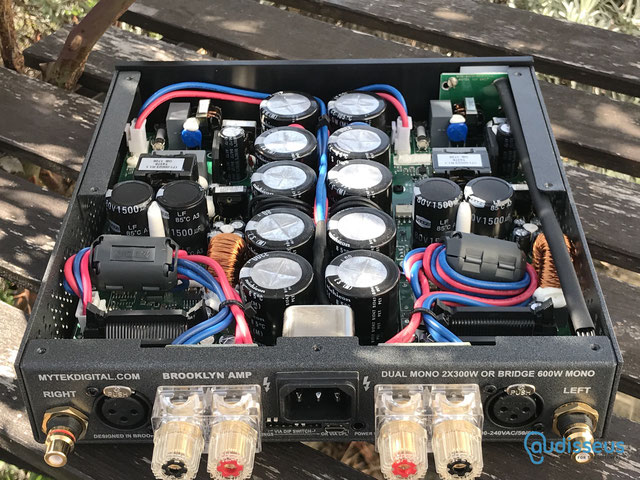 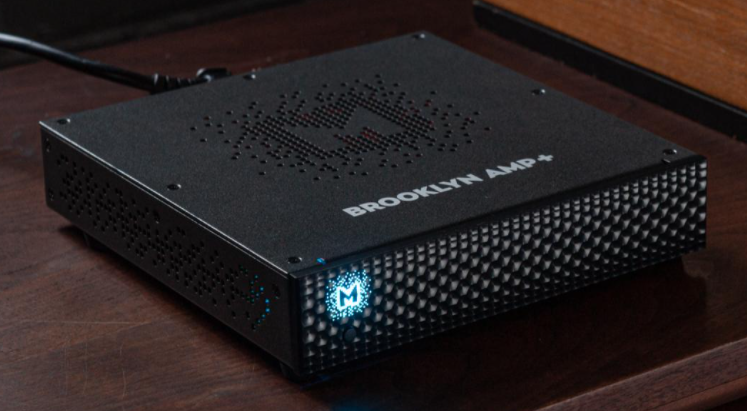 Mytek broke with their assembly house and redesigned the entire line. New models to replace the old ones are slowly coming out.
Apparently the old assembly house is continuing to produce the old models, so if you want to buy, make sure you are buying an actual Mytek.
G

firedog said:
Mytek broke with their assembly house and redesigned the entire line. New models to replace the old ones are slowly coming out.
Apparently the old assembly house is continuing to produce the old models, so if you want to buy, make sure you are buying an actual Mytek.
Click to expand...

WOW, they didn't pay their bill? without willing to judge on certain part of the world practices, and spread clichés, it does not sound like something that you'd expect to happen in Brooklyn NY manufacturing facilities, does it? Were they still manufacturing in the US?
Edit: I see made in E.U. so I guess they moved production, it wasn't the case a few year back.
Last edited: Aug 9, 2021

Thanks and noted. Now where is the Topping power amp we all have been waiting for
An audio purist, not really an audiophile
OP

Interesting. Measurements match theirs almost one for one. How much are these?
Amir
Founder, Audio Science Review
Founder, Madrona Digital
Contributing Editor, Widescreen Review Magazine
Click for My Technical Background
My YouTube Channel
P

vkvedam said:
Thanks and noted. Now where is the Topping power amp we all have been waiting for
Click to expand...

amirm said:
Interesting. Measurements match theirs almost one for one. How much are these?
Click to expand...

The measurements sure don't. I think they are around $500 each in single quantity which makes the $2,500 price of Mytek quite steep. Found others selling for $800.
Amir
Founder, Audio Science Review
Founder, Madrona Digital
Contributing Editor, Widescreen Review Magazine
Click for My Technical Background
My YouTube Channel
M

amirm said:
It is too expensive for middle of the road performance with potential reliability issues
Click to expand...

Some user reports of catching fire too.

amirm said:
The measurements sure don't. I think they are around $500 each in single quantity which makes the $2,500 price of Mytek quite steep. Found others selling for $800.
Click to expand...

They added capacitor banks. Is USB interfacing with the Pascal modules or Mytec added a custom microcontroller?
J

amirm said:
The measurements sure don't. I think they are around $500 each in single quantity which makes the $2,500 price of Mytek quite steep. Found others selling for $800.
Click to expand...

each you mean by channel? that's extremely expensive and honestly Mytek is not doing bad if it's the case. It has CE marking...

Oof, that's one expensive piece of mediocre gear (not to mention it's questionable quality).
OP

PeteL said:
each you mean by channel?
Click to expand...

Timely Review! been looking at these to use pre-outs on my avr but was balking at the price - high WAF size wise. That and the audiophile community is treating this amp as the new darling, that makes me a bit skittish. The VTV is looking interesting a 3 Channel for 800 and a nice size form factor.

One of my worst nightmares. Having a faulty piece of gear, not noticing it right away and trying to find the flaw somewhere else. Had those moments a few times already and got trust issues.

Looking at that cramped amp I wonder how hot it gets. My stereo Hypex UCD kit also is pretty cramped and reaches temperatures that makes the case impossible to touch after a few hours which probably doesn't to the life span much good.
SMSL SU-9N ➟ Audiophonics Purifi Monoblocks (gain bypass) ➟ Nubert NuVero 170 ➟ Absolute perfection and bliss!
OP

anphex said:
Looking at that cramped amp I wonder how hot it gets.
Click to expand...

The top at least was at room temperature during my testing. Heat may be dissipated on the bottom. I forgot to check that.

But yes, if you don't need an amp to be small, there is no reason to get one with everything stuffed in a little box.
Amir
Founder, Audio Science Review
Founder, Madrona Digital
Contributing Editor, Widescreen Review Magazine
Click for My Technical Background
My YouTube Channel
You must log in or register to reply here.