This is a review and detailed measurements of the Genelec 8351B powered monitors (speakers). It was purchased used by a member and kindly drop shipped to me for testing. They cost US $3,995 each.

The 8351 is a thee-way speakers with the bass drivers hidden beyond the front baffle: 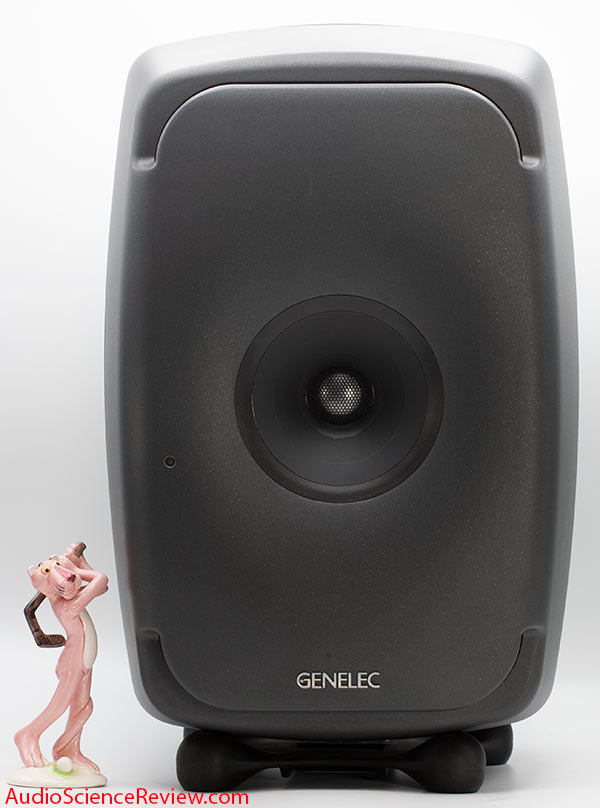 Naturally the back panel allows for fair bit of configuration changes: 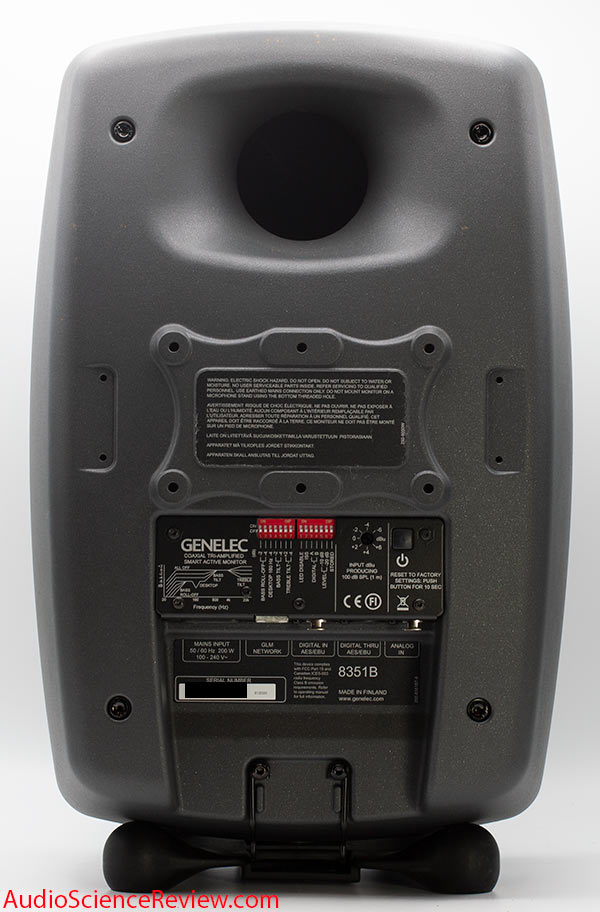 I reset the speaker to factory settings and left all the dip switches off as you see. I used analog XLR input for all measurements and listening tests.

I performed over 1000 measurement which resulted in error rate of around 1%.

Testing temperature was around 65 degrees F.

Reference axis for measurements was the center of the tweeter (by eye).

Genelec 8351B Measurements
As usual we start with our spin frequency response measurements: 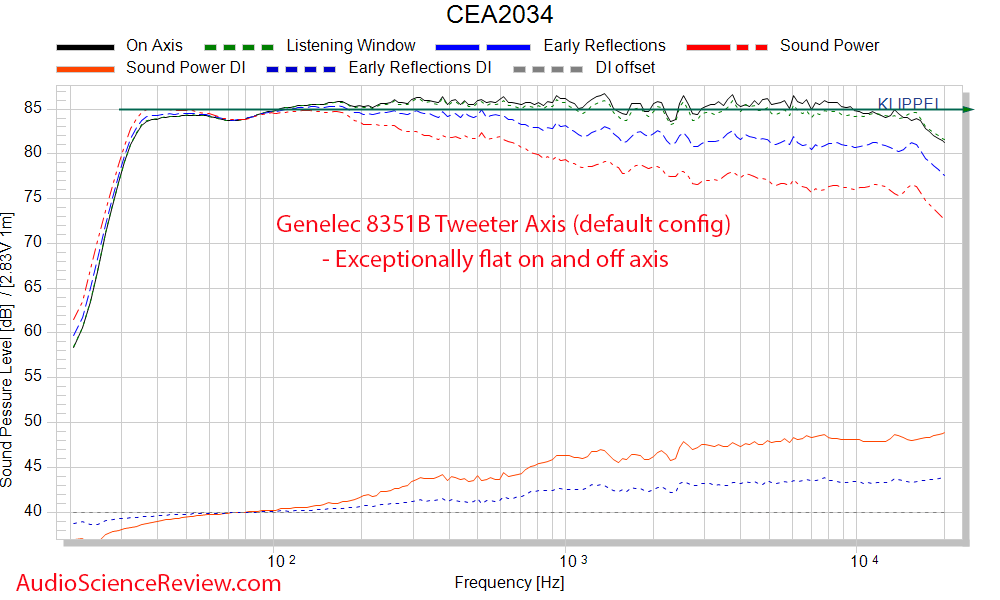 I expected flat on-axis response and we essentially get that. There is a tiny bit of deviation in lower frequencies. I checked with Genelec and they looked up the measurements and they are ± 0.5 dB in that region. They show it a bit flatter than I do but I don't think either one of us know whose measurements are more correct. Regardless, the deviation is tiny and your room would overwhelm it in practice.

Directivity plots show off-axis that is similar to on-axis as it should be with coaxial drivers. This is in turn reflected in early-window response and predicted one: 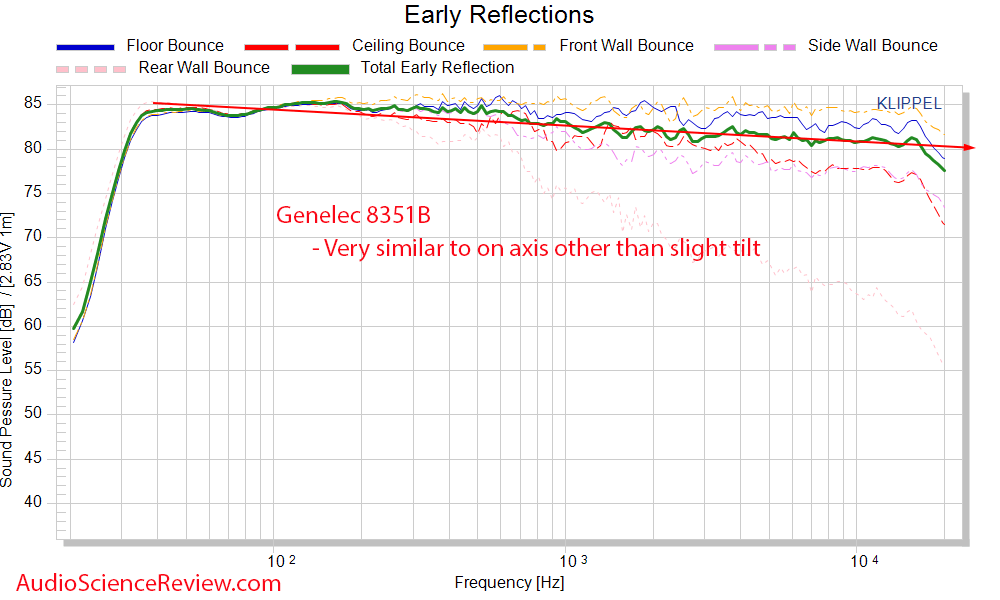 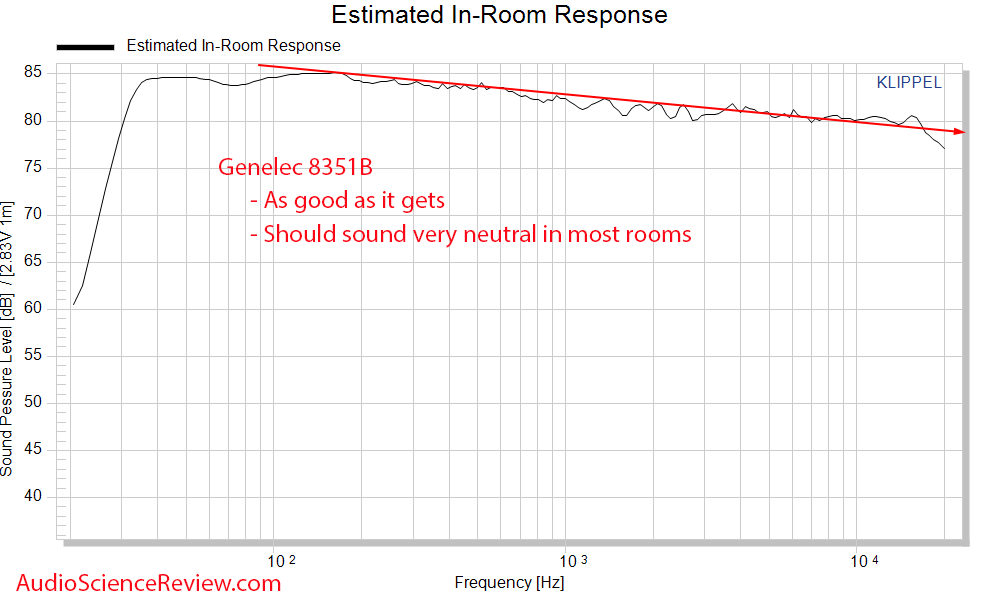 I don't have near-field driver responses for you since it was silly to try to measure them on a coaxial driver. 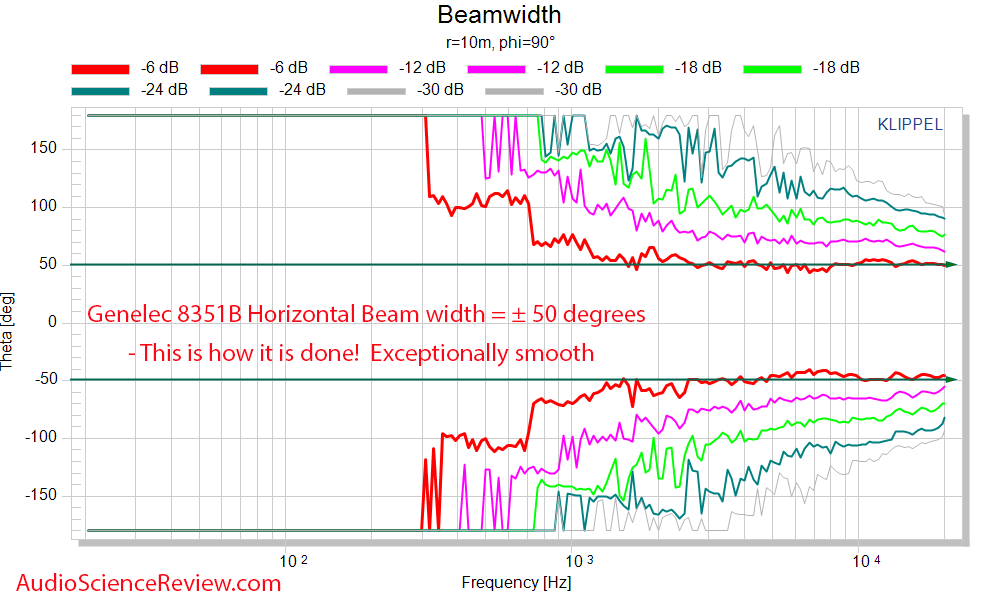 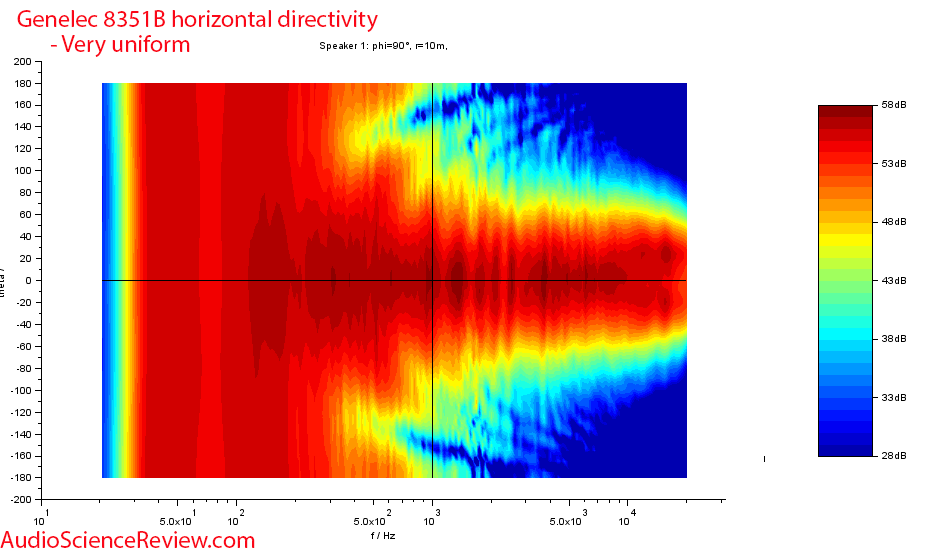 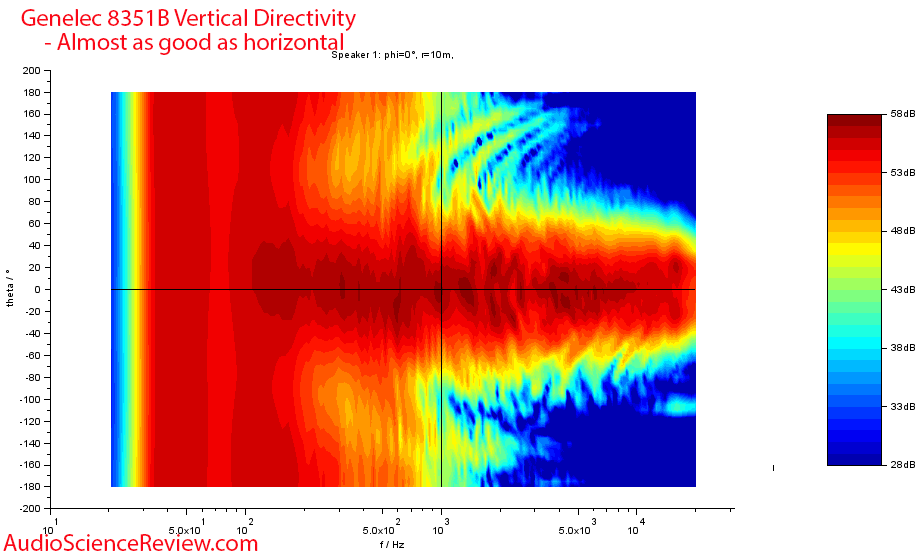 Genelec 8351B Listening Tests
Given the size of this speaker and interest in membership to use them in high-fi and home theater applications, I decided to listen to them using my main system in far field listening. From the first few seconds I knew the sound was right and in need of no adjustment other dialing out the one room mode I have around 105 Hz. Track after track has excellent sound with image coming out of a circular halo around the driver. This is what you get when the speaker is well designed and relies on decades of research on what good sound is. All of my reference tracks that were curated on another system like it translated and delighted just as well.

Dynamics and Competition with Revel Salon 2
There has been a lot of talk about how these two speakers compare in the forum. I find the conversion odd as we are comparing a bookshelf speaker to a full blown tower. Still, I decided to compare the two since I own the Salon 2.

The Salon 2 quickly showed its difference in taller image that was not so focused and centered as the Genelec. This of course could be an optical illusion of the Genelec pulling your eye toward its tweeter. Still, I stand by this observation. The other thing that stood out was that the highs were more prominent in Salon 2 bringing more realism to high frequency notes. The Genelec sounded subdued in this front. Perhaps there is some peaking in my Salon 2 (have not measured it yet).

Where one could not doubt a difference was the power capability and bass extension. On sub-bass heavy tracks the Genelec held its own at lower volume. As you turned up the level the bass driver started to make this annoying "furrrrring" sound on heavy bass notes. You could easily hear it if you stood on top of the speaker and listened through the slot on top. Turn up the volume a bit more and the red clipping indicator would come on.

The Salon 2 was in entirely different class. Powered with 1000 watts of amplification, it provided a level of belly shaking that the 8351B could not even dream about reproducing. And it would keep getting louder and louder with zero distortion and strain. It simply was not a fair fight even though the 8351B tries hard.

Overall, the Salon 2 provides that large, dynamic sound that a statement speaker needs to provide to fill a large space. The 8351 is for more intimate and more focused listening.

Conclusions
Both objectively and subjectively the Genelec 8351B delivers. Near perfection as far as tonality and dispersion is provided. Its power delivery is the best of any Genelec speaker I have tested so far and is almost beyond what you may need. In my case though, I am used to much larger and powerful systems and there, the 8351B was limiting especially with its bass slot noise. So I would not position it above its class.

Overall, it is my pleasure to put the Genelec 8351B on my recommended list.

Any donations are much appreciated using: https://www.audiosciencereview.com/forum/index.php?threads/how-to-support-audio-science-review.8150

A very nice review, many thanks Amir, I too have been curious about these speakers.
Veritas me dirigit

Thanks @Spocko for sending them in.
Click to expand...

Same. If I had a pair there is no way I would be able to part with it for that long

My eyeballs are interpreting the graphs and sending distress signals directly to my wallet.

Would you show us the Near-field driver measurements and THD too?

amirm said:
As you turned up the level the bass driver started to make this annoying "furrrrring" sound on heavy bass notes.
Click to expand...

Would be interesting to see the distortion graphs...
a guy in [a recurring] search for the perfect AVR, floorstanding speakers, subs & over-ear headphones

richard12511 said:
Yay! These are my main speakers, and they are awesome! Glad you enjoyed them.
Click to expand...

Do you also hear that bass slot noise on yours?
P

Vintage57 said:
Next we have to get a Neumann KH420, anyone in the lower 48 that wants to ship. I’ll offer to cover shipping both ways. To Amir and back.
Click to expand...

Amir, thanks for publishing this, was really looking forward of it. Do you also have the distortion measurement?

Thanks for the review @amirm and thanks to the gloved one himself, @Spocko for sending them in.
https://www.erinsaudiocorner.com/

Now we are talking after an Abyssmal night before . How come this one has got a golfing panther instead of European norm footie (soccer) panther @amirm?
An audio purist, not really an audiophile
M

@amirm can you please measure your Salon2? You've now compared them against the 8351b subjectively, which was greatly appreciated. I've finished building my 2 channel room, but I'm undecided between Salon2, D&D 8C, Kii 3, Grimm Ls1. I will help to pay for movers to help you measure the Salon2s($200). Maybe others would chip in?
Blind Binaural shootout I (thewas)
Blind Binaural shootout II (ctrl)