This is a review and detailed measurements of a number of amplifiers/energizers/drivers for electrostatic headphones. I own three of them which are rather vintage Stax units: the SRM-311, SRM-006t and SRM-007t. The first one is solid state and the other tube. The last unit for comparison is the Koss E/90X energizer that is on kind loan from a member.

Here is the gang: 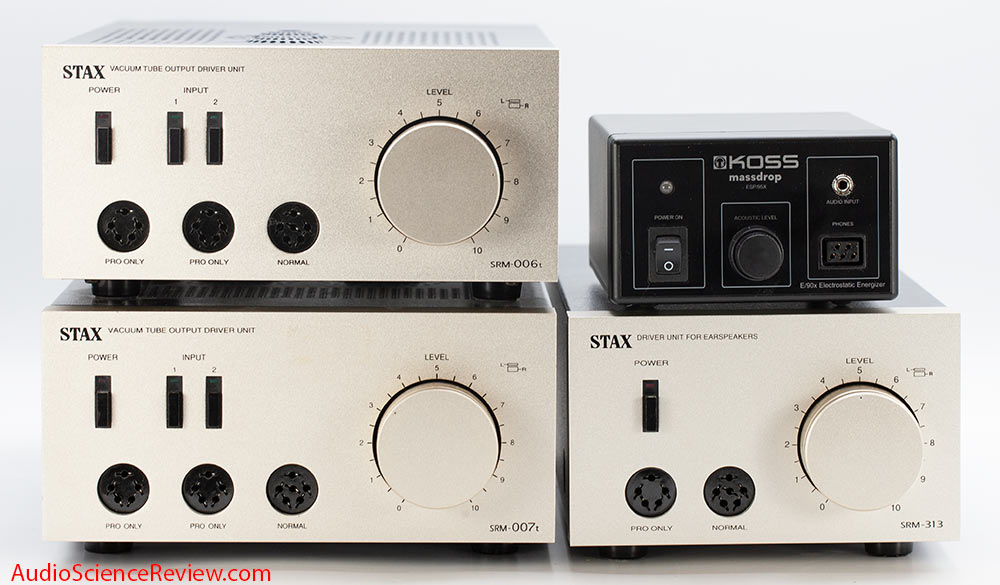 The Stax units harken back to the great days of Japanese hi-fi with nice enclosures, switches and volume pots. The Koss in sharp contrast could be mistaken for a give-away kids toy in McDonald's happy meal.

I did not have the plug for any of these so made a twisted wire probe that I simply stuck in the Left+/- connection. For this reason, the noise level may be higher than it would be with a more proper connector.

Stax Electrostatic Headphone Amp Measurements
I had to modify my headphone amp dashboard as it uses a 600 ohm load which doesn't work for electrostatic headphones which essentially have infinite resistance. The highest my Audio Precision goes to is 100,000 ohm so that is what I used. The other major difference is that electrostatic headphones require far higher voltages to produce sound. So instead of my usual 2 or 4 volt output, I used a whopping 80 volts! I thought this would be within the comfort range of all the headphone amps as it is in the middle setting of the Stax headphone amps. Alas, this did not turn out to be the case but we are getting ahead of ourselves. Let's start with the Stax SRM-311 where I developed the tests: 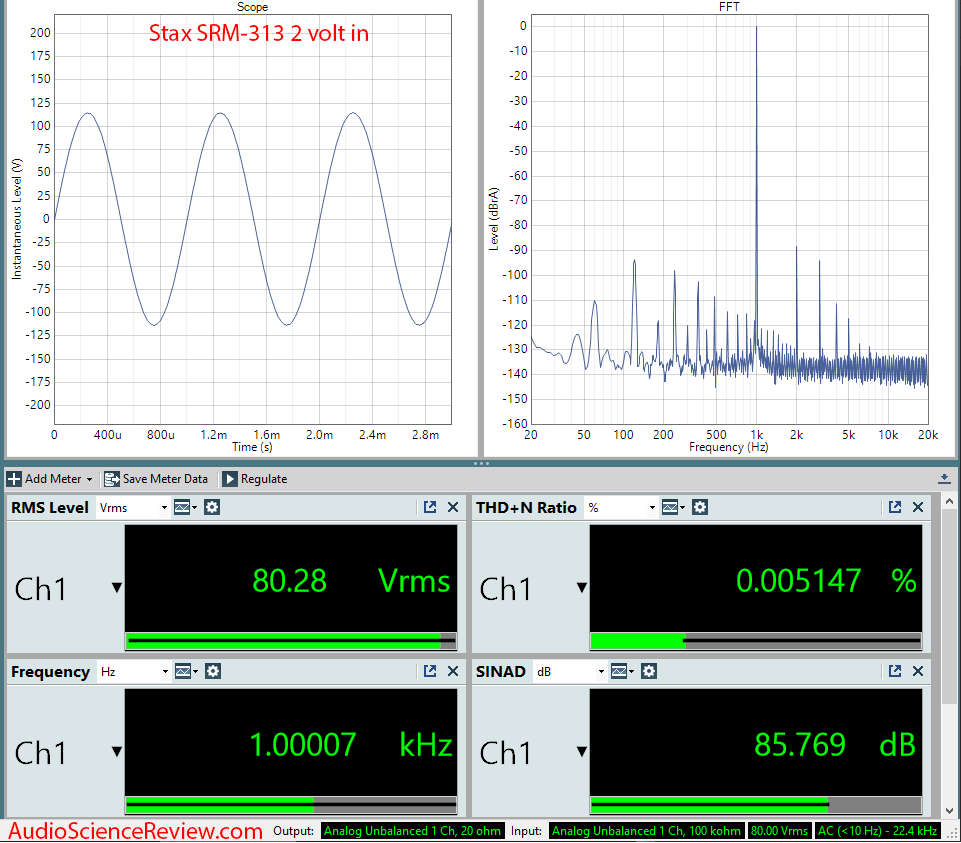 Second harmonic is at -88 dB which more or less sets our SINAD since distortion is more dominant than noise (SINAD is a relative sum of noise and distortion). 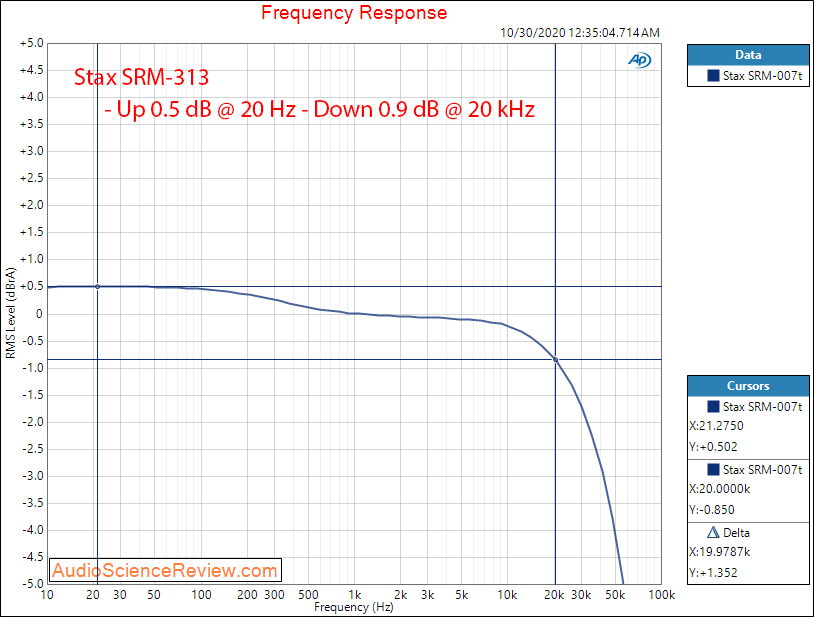 And droop at 20 kHz. The variation probably gets lost in the frequency response of the headphone itself.

Last test that I prepped was the power test but now into 100K ohm: 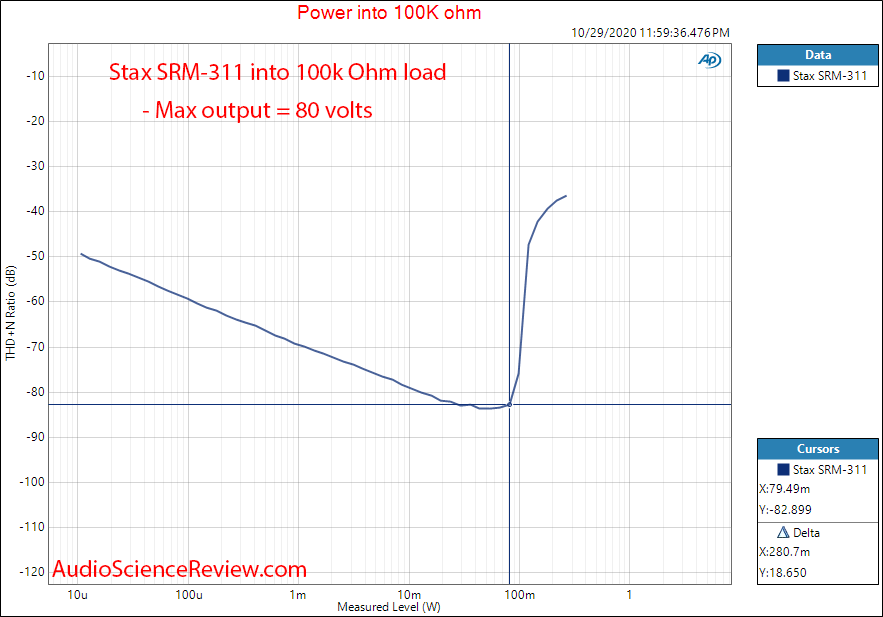 Let's jump to the other extreme and test the SRM-007t which is a differential tube amplifier (balanced in, balanced out): 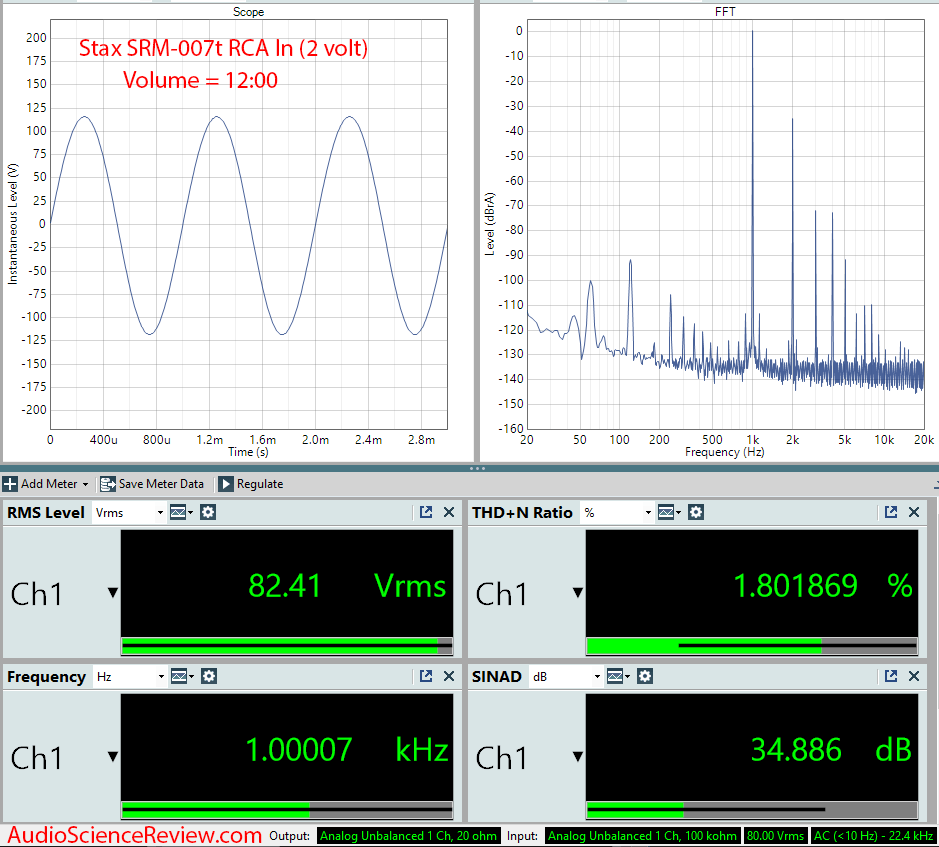 Now this is a bummer. Distortion at around 80 volts was huge as you see above. I thought it might be clipping or something but that is not the case: 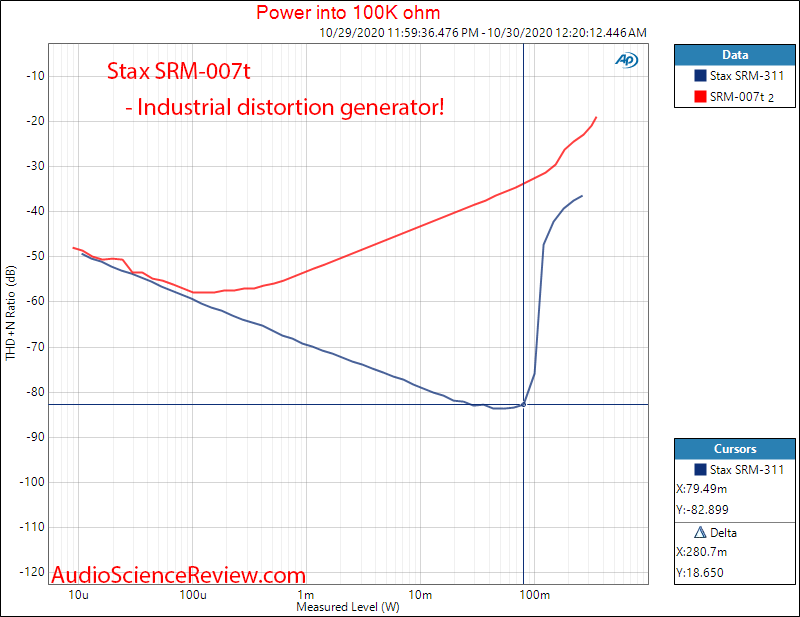 No wonder I always heard this amp distorting like heck at higher volumes.

Its frequency response is more flat though: 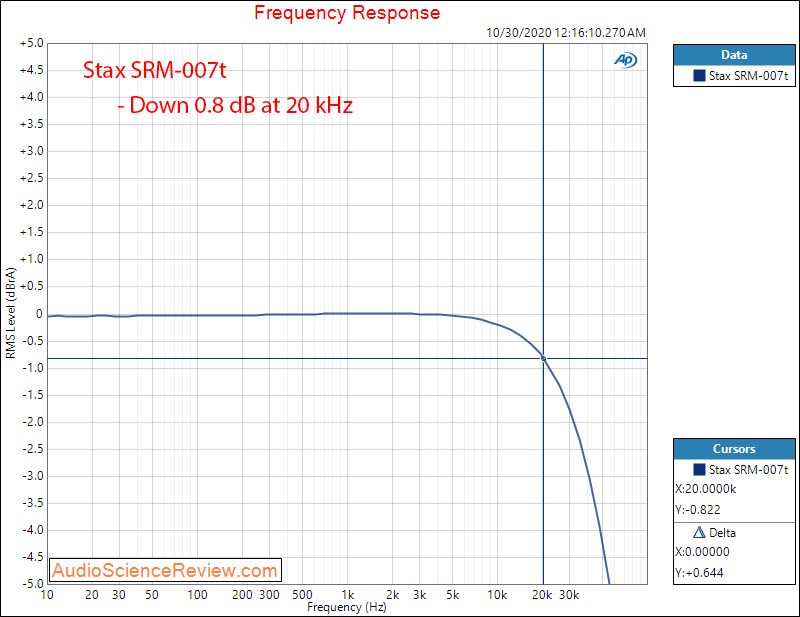 Here is the SMR-006t which is also tube based but its output is not differential: 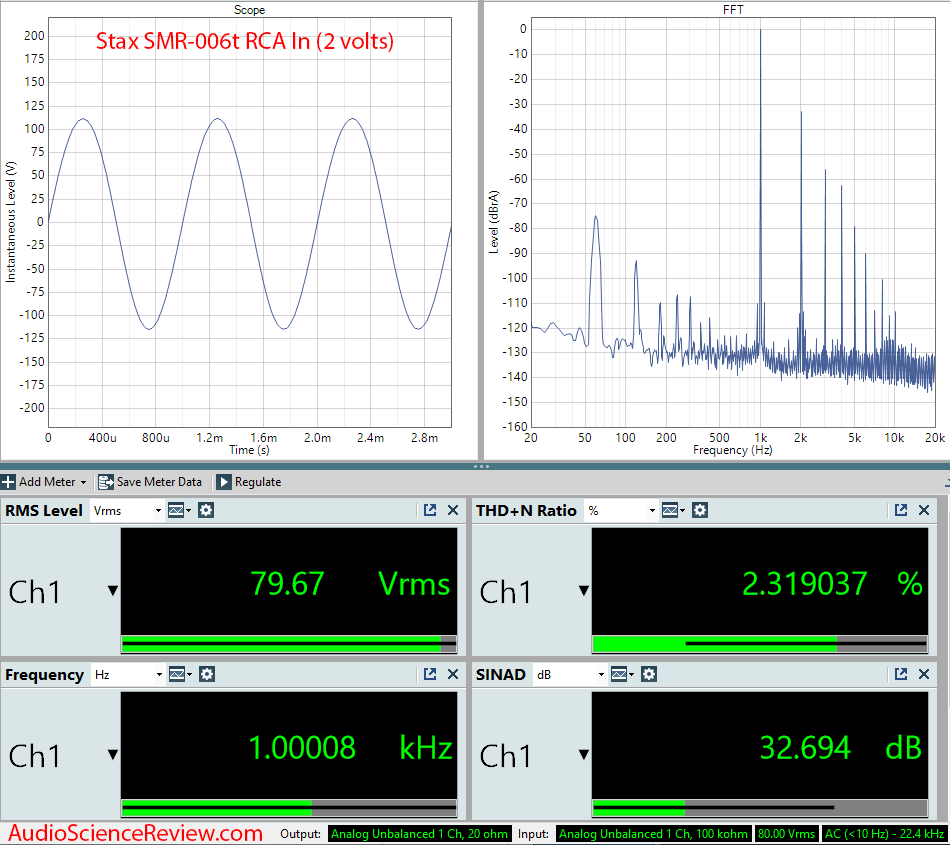 Frequency response is the same as SRM-007t: 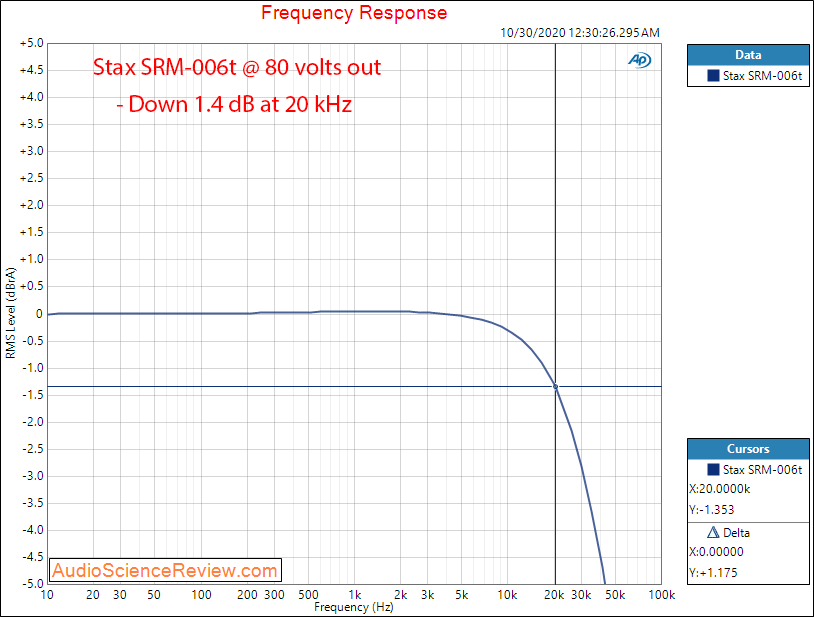 It has the same distortion as well although noise floor is higher yet: 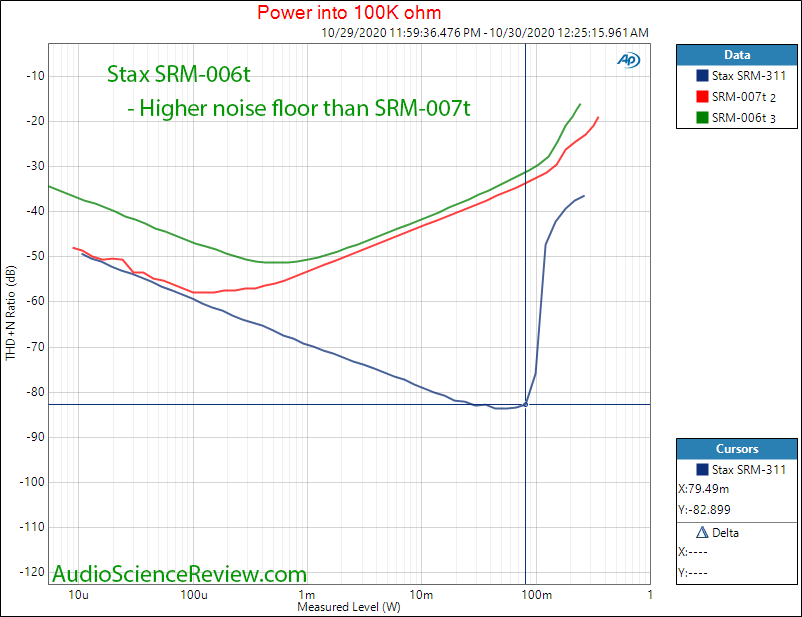 So this rules out anything being broken in the tube energizers other maybe higher noise of the SRM-006t.

KOSS E/90X Energizer Measurements
The E/90X lit its LED in red in protest well before 80 volt out. So I decided to take it easy on it and turn up the level to just before LED turned red: 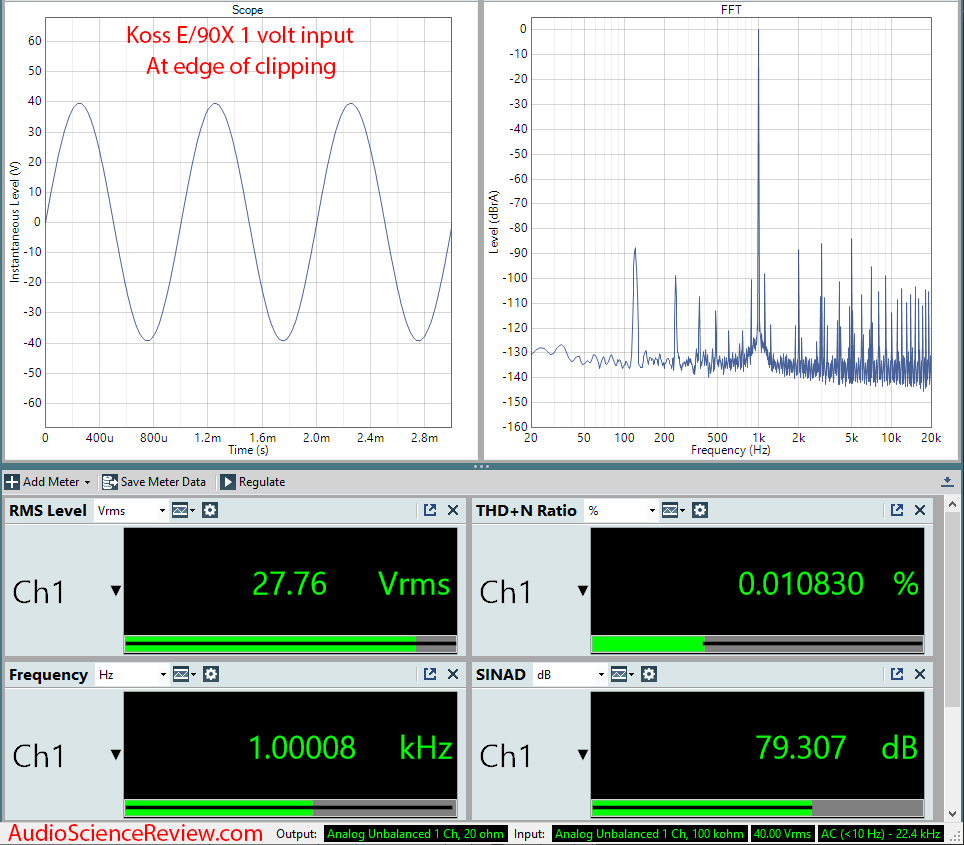 Running our sweep we see that the KOSS is much more well behaved albeit, with much lower output voltage: 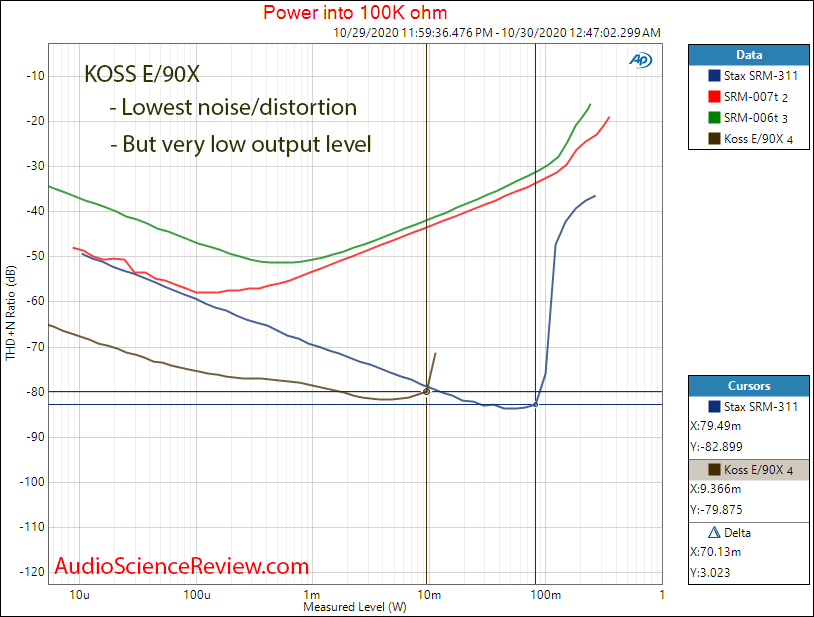 Both distortion and noise are low but then we run out juice at nearly 10% of what the Stax amps can produce. I noted that the output level was not that high in my review of the KOSS ESP 95X headphone about this issue. 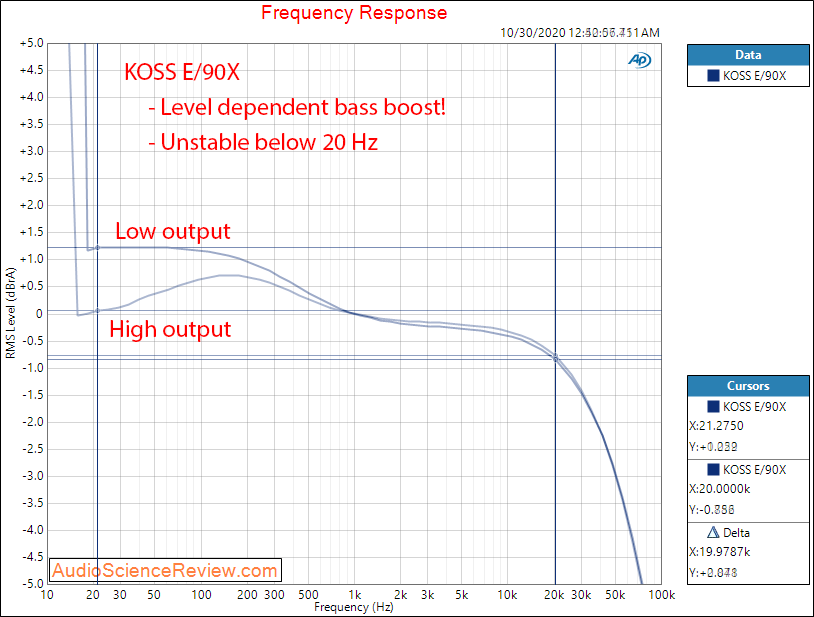 Notice that the low frequency response changes with output level! Is this some kind of loudness compression? If so, the KOSS headphone measurements will be level sensitive.

The second issue was instability at frequencies below 20 Hz. I set the frequency to 16 Hz and as I turned up the volume gradually the output suddenly jumped from something like 10 volts to 160 volts! The LED would then flicker between red and green. Suggest using a high pass filter with this headphone/amp to make sure it doesn't see anything below 20 Hz.

Conclusions
Anyone want to buy a pair of hardly used Stax tube headphone amps? 'Cause after seeing how poorly they perform, I don't think I want to be seen in the same house with them! The heck were they thinking? A tube amp mates well to electrostat headphones because it naturally have a high voltage output. Why screw that up with tons and tons of distortion? I guess they decided to use no feedback.

I was surprised that the KOSS E/90X had very low distortion. Alas, it must use much lower voltage rails/output transistors so not able to generate nearly as high a voltage as the Stax units can. Alas, if it is providing adaptive bass boost, using a different amp without that feature (the norm) would cause different audible results.

Will be interesting to test other after-market amps to see how they compare to these.

Dropped by the garden (what's left of it) to see if the persimmons are ripe enough to pick and my heart fell to the ground. The one fruit I was eyeballing everyday was gone! Fearing the worst, I searched for the rest and found a few remaining ones: 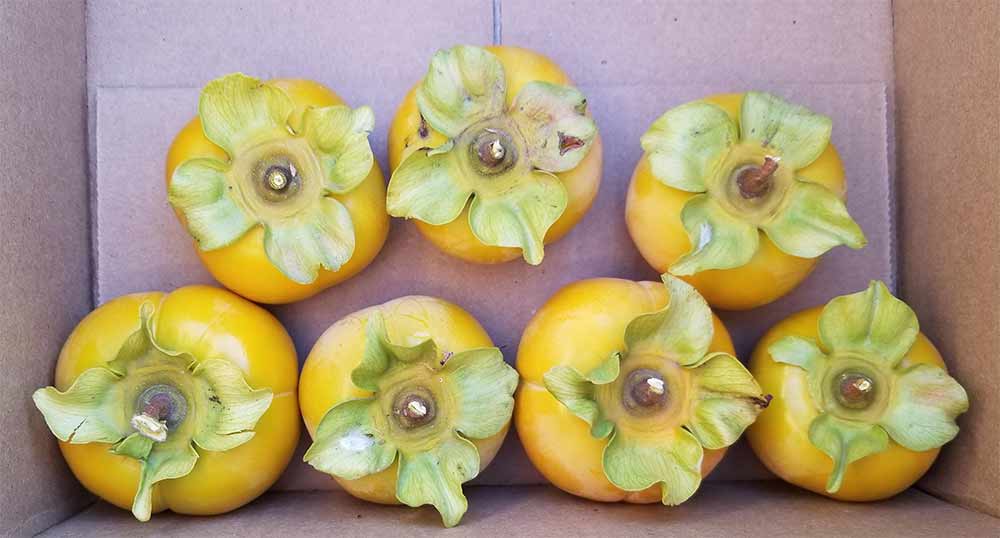 We waited nearly 10 years for this little tree to bear fruit and it finally bore fruit a couple of years ago. Alas, last year some varmint at them all. So despite losing some, I am happy to have rescued the above. They last a long time since they are the Japanese variety.

Wow really surprised at the tube Stax. I had the really old Lambda where you ran it thru the interface and connected your own power amp. Wish you had that to test. Who knows how the step up transformers would fare.

I used it at times with large tube amps and solid state. It seemed happier with amps that had + and - outputs like modern class D has. I used it for a long time with a Sumo Model 9 which functioned this way.
Y

The Stax Tube amp is expected to have high distortion for me as most tube followers are after those sort of harmonic distortion sound as in a lot of high end speaker tube amps... but still a bit surprising for me for the distortion to be that high though.. I am really curious about the highly praised Sennheiser Orpheus and Blue Hawaii amps for the sake of knowing the SINAD of amps that can literally buy me a new car

Cool post! Happy to see some one measure these

How ever you need to get a hold of one with the CCS Mod, it helps to reduce the clipping!

Those distortions are caused by tube input stage. Would love to see how BHSE measure silicon input tube output. I guess it wouldn't measure too well but should be better.

I just did a search for what this forum thought of electrostatic tech and found this! How timely
Neat audio visualizer: showcqt
W

I wonder if I can just use a high power speaker amp and still get less power supply noise than these...
B

Thank you for doing the review on electrostatic energizer, not much people on internet does this. The measurement explains why after following oratory1990's eq my ESP/95X sound bassier than other headphone eqed. There were a lot of people talking about koss energizer sounds worse than Stax's, interested to see their opinions now.

Holy %$*# @amirm !! Talk about an easy way to pay for the forum for awhile

xykreinov said:
View attachment 90434
Holy %$*# @amirm !! Talk about an easy way to pay for the forum for awhile

Yeh, these things are not cheap! I think the headphone and amp was $4K or something back in year 2000!
Amir
Founder, Audio Science Review
Founder, Madrona Digital
Contributing Editor, Widescreen Review Magazine
Click for My Technical Background
My YouTube Channel
OP

wwenze said:
I wonder if I can just use a high power speaker amp and still get less power supply noise than these...
Click to expand...

800 watts at 8 ohms should do 80 volts. Probably not really enough to enjoy.

@amirm The input sensitivity for 100V out is 100mV (60dB) on the SRM-006T and SRM-007T and the SRM-313. Your plot for the SRM-006T shows 2V in, 20 times the rated sensitivity. So, if you are feeding 2V in, the volume control on the Stax could not set at maximum (as it is up front of the gain stages) if you only got 80V (32dB gain) out. So the input impedance was high as a result and the performance, both the frequency response, the noise level and distortion will all be affected.

Could you run the Dashboard THD+N/SINAD plot at rated input (100mV- with the vol pot wide open) as below on say the 007t, so we can see how close to rated spec it actually is? 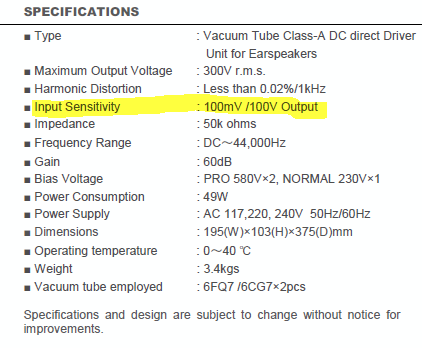 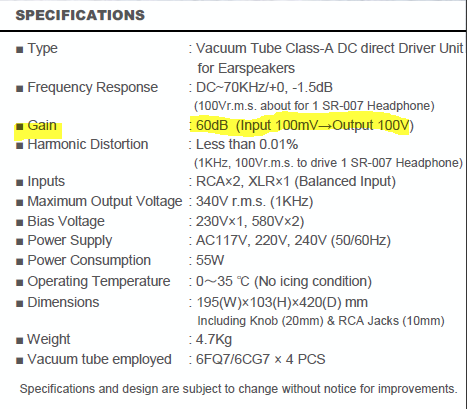 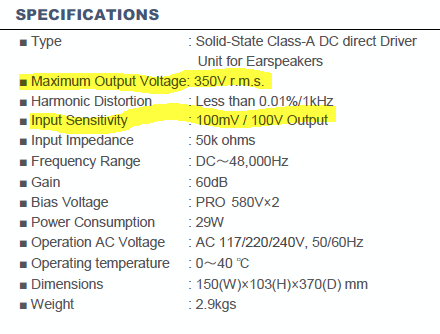 It seems strange Stax would have held onto the old definition of line level even for products made well into the 2000s.
Last edited: Oct 31, 2020
Ricky Roma: I subscribe to the law of contrary public opinion... If everyone thinks one thing, then I say, bet the other way...

wwenze said:
I wonder if I can just use a high power speaker amp and still get less power supply noise than these...
Click to expand...

You'd be better off to just put a 100V PA line transformer and a couple of flyback diodes on a decent 50wpc amplifier and call it done.
Ricky Roma: I subscribe to the law of contrary public opinion... If everyone thinks one thing, then I say, bet the other way...

"....Dropped by the garden (what's left of it) to see if the persimmons are ripe enough to pick and my heart fell to the ground. ..."

Fruit & Veg. are supposed to be good for you. Pretty well accepted truth universally, but I so clearly remember the first time I took my first bite out of a not-yet ripe persimmon. I thought someone had filled my mouth with slivers of glass. Youch! Talk about 'astringent'.
Amirm, what variety of persimmon are you growing? [yes, I realise I haven't uttered a single technical term on this forum. hehehe]
Use things and love people. Not the other way around
NAD 3020A, SMSL Sanskrit 10th MkII, rpi+MoOde 8, Tannoy Arden
G

Having 300V less than an inch from my ears doesn't give me warm fuzzies.
L

Hey Amir.... how about a real level matched blind ABX test between the tube and SS Stax amps.... do you think you could tell the difference with music? It would be an interesting test I think.

001 said:
Fruit & Veg. are supposed to be good for you. Pretty well accepted truth universally, but I so clearly remember the first time I took my first bite out of a not-yet ripe persimmon. I thought someone had filled my mouth with slivers of glass. Youch! Talk about 'astringent'.
Amirm, what variety of persimmon are you growing? [yes, I realise I haven't uttered a single technical term on this forum. hehehe]
Click to expand...

These are Japanese variety meaning you can eat them when they are hard. Indeed they don't ever get as soft as western version. It is tricky though as too early and they are astringent although not nearly as bad as the western variety in that phase. I will probably wait a month or two before eating these to make sure they are ripe enough. Wish I could leave them on the tree to ripen.....
Amir
Founder, Audio Science Review
Founder, Madrona Digital
Contributing Editor, Widescreen Review Magazine
Click for My Technical Background
My YouTube Channel
You must log in or register to reply here.