This is a review and detailed measurements of the Elac Carina BS243.4 stand-mount speaker. It is on kind loan from a member and sells for US $999. 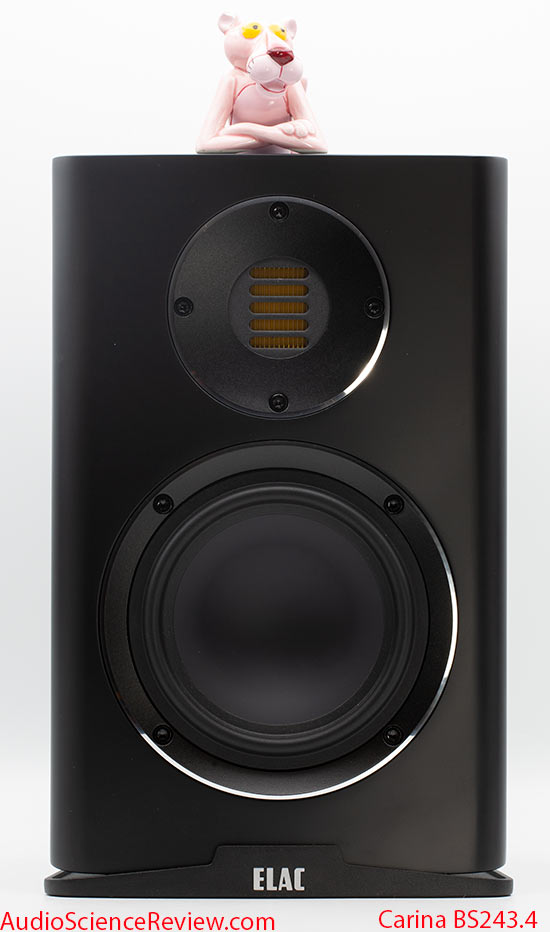 Even though this is a speaker designed by Andrew Jones, it is a continuation of the line traditionally designed in Germany with much higher sales price and it shows. The cabinet and hardware is way above budget class. It feels extremely solid and well put together. This is the first time Andrew has designed a speaker with folded tweeter (AMT).

Back panel sports some of the fanciest, nicest, largest binding posts I have seen on such a small speaker (hard to see in the picture): 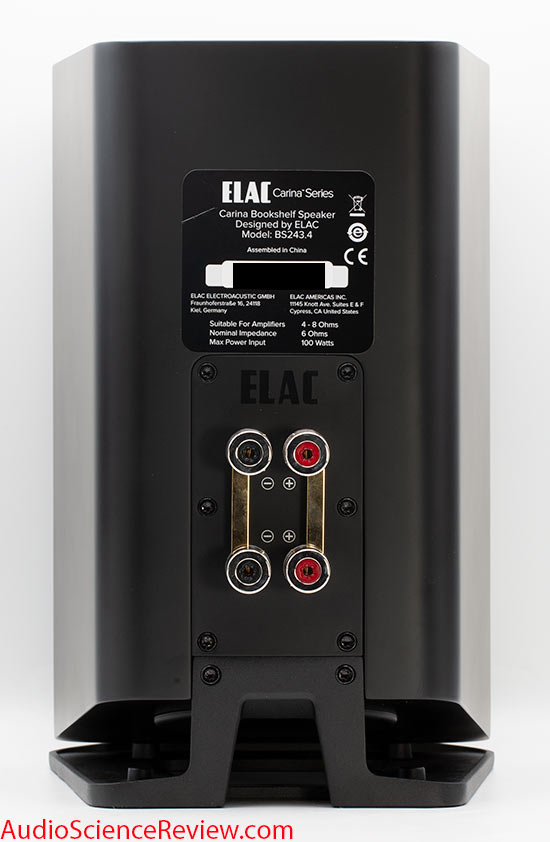 As you can see, there is a cut out to allow the port to exhaust. This a compromise that allows the speaker to be placed close to the wall yet not have the disturbance that front port can create due to internal resonances. The built-in stand is cast aluminum (?) and seems quite sturdy. I thought it would be plastic but it is not.

Elac Carina BS243.4 Measurements
As usual we start with our "spin" graph: 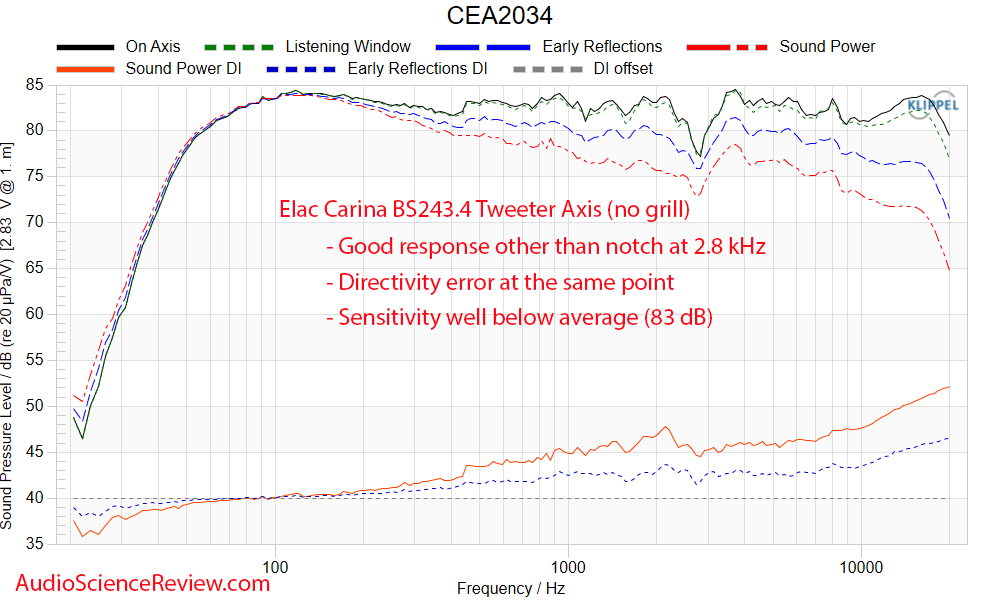 The on-axis response looks pretty good until we land in that ditch at 2.8 kHz. In a video I watched, Andrew talked about the challenge of the AMT tweeter not being able to reach as low as dome tweeter. I thought he had solved that problem but seeing this hole, it seems that was not. Sensitivity was about 4 dB lower than average (roughly 83 dB). So you need good bit of amplification to go with these speakers.

I can't quite tell where the hole is from near-field measurements due to in ability to precisely match the driver responses: 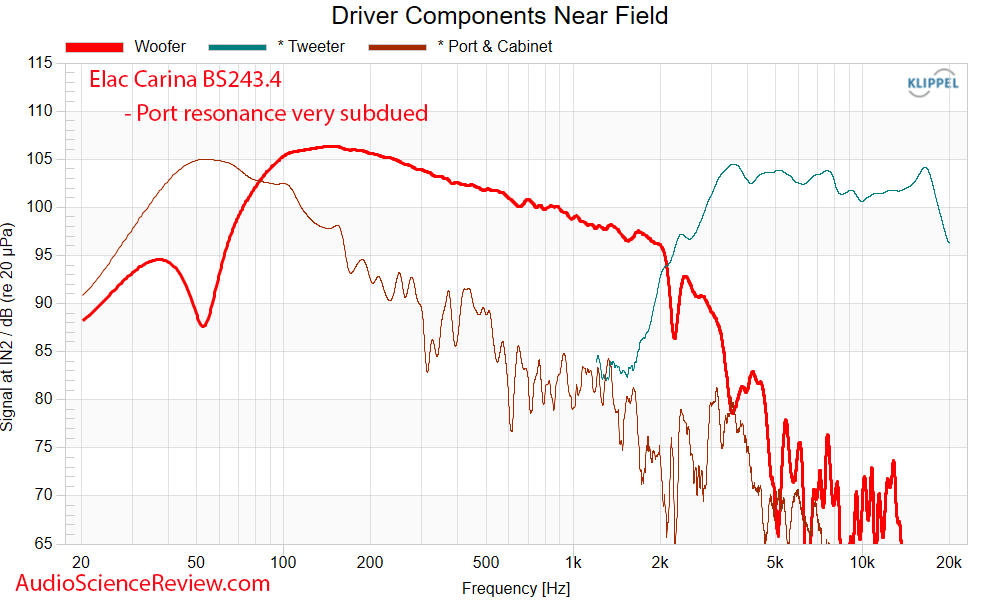 Due to good overall directivity, off-axis response is similar to on-axis: 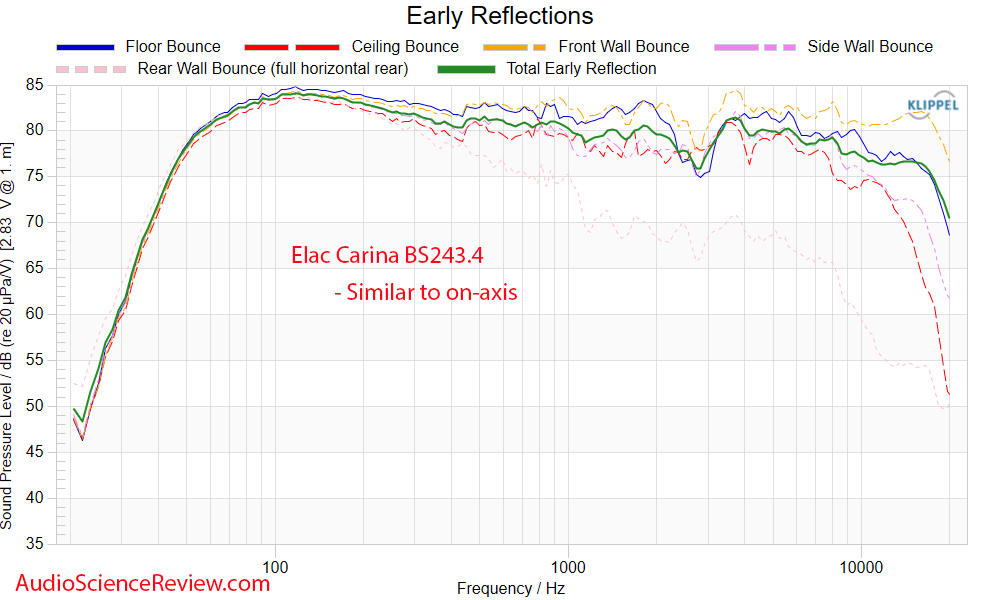 Predicted in-room response has the error we already know about: 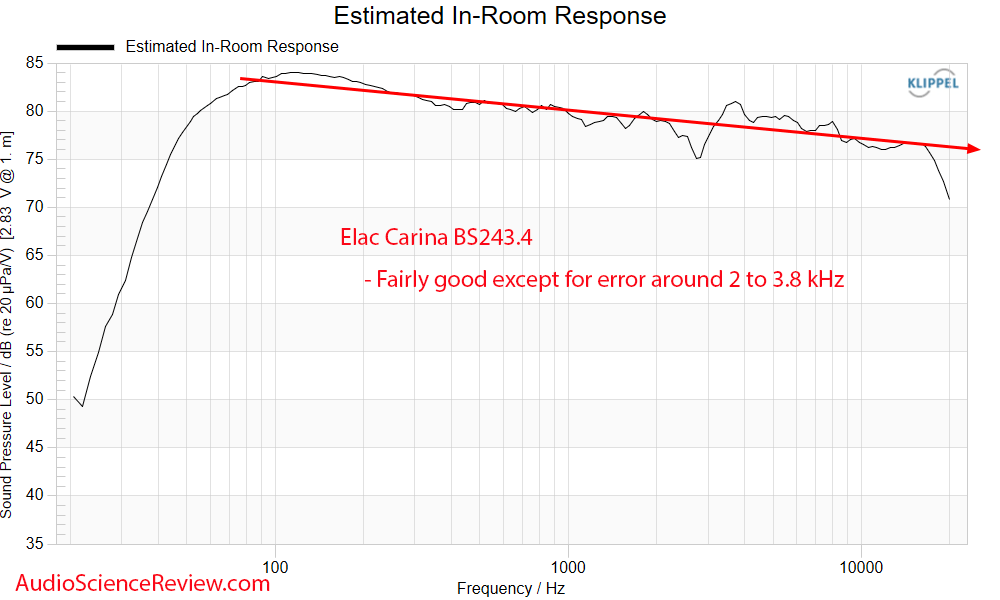 Beamwidth is larger than typical speaker which should result in a more spacious image: 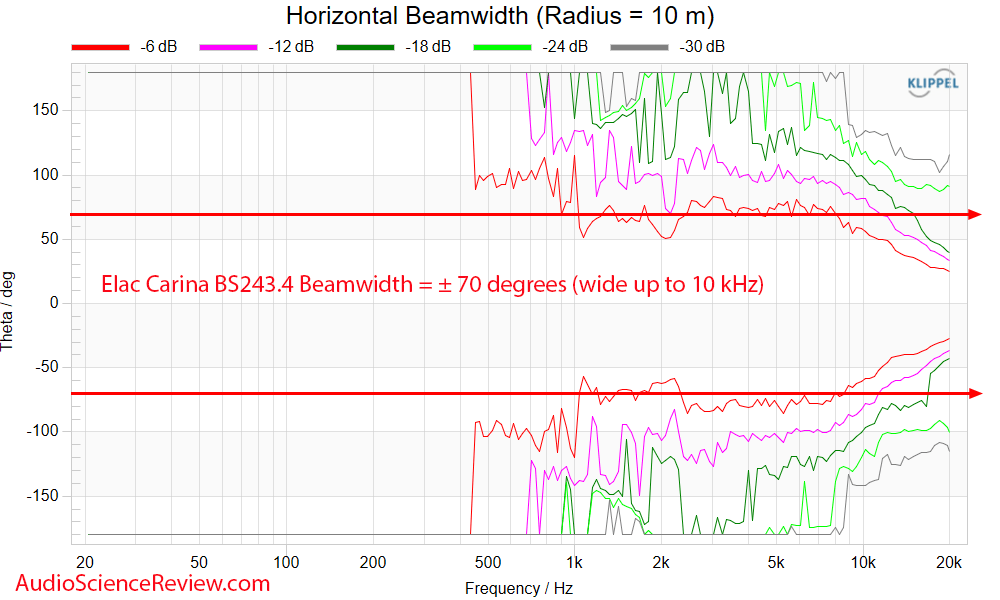 It beams (narrows) above 10 kHz but that is not a very critical region. 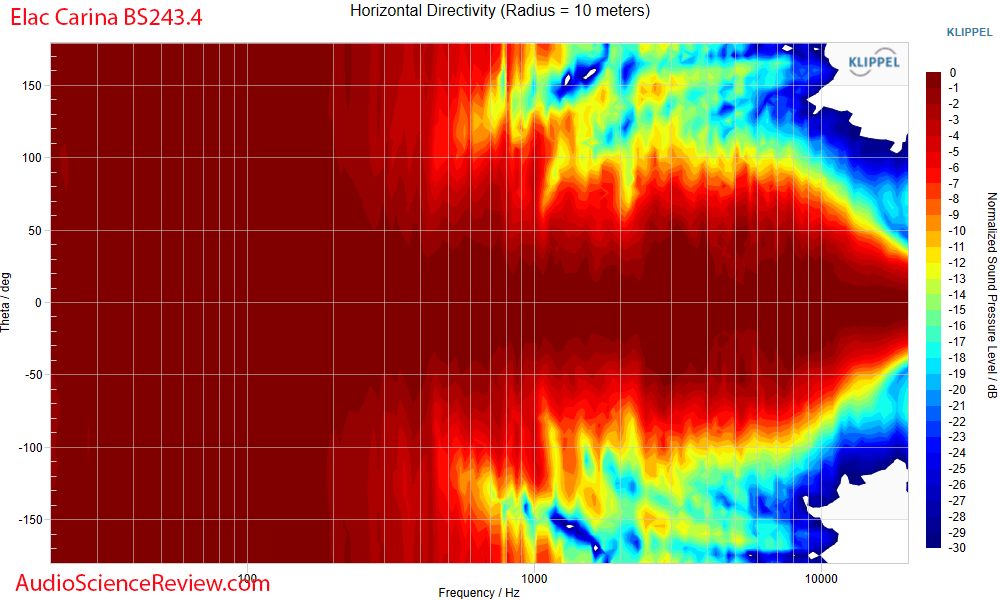 Vertically it has the typical problems of 2-way speakers (non-coaxial): 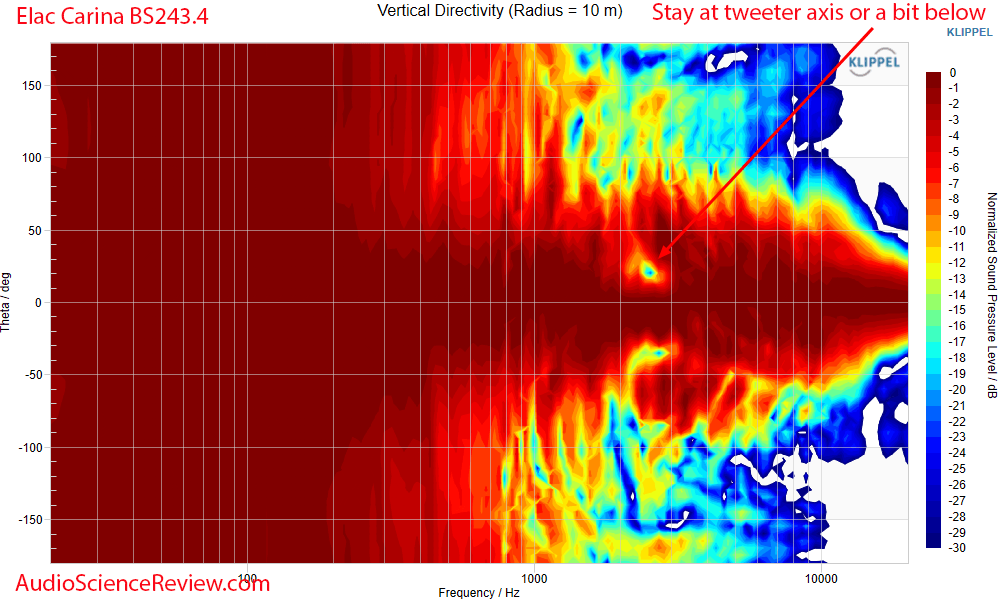 So be sure to point the tweeter at your ears and don't sit above them.

I noticed a pronounced distortion caused by a narrowband event (like a resonance):

I was however stomped in finding the source of it in other measurements. It shows a bit in waterfall graph though: 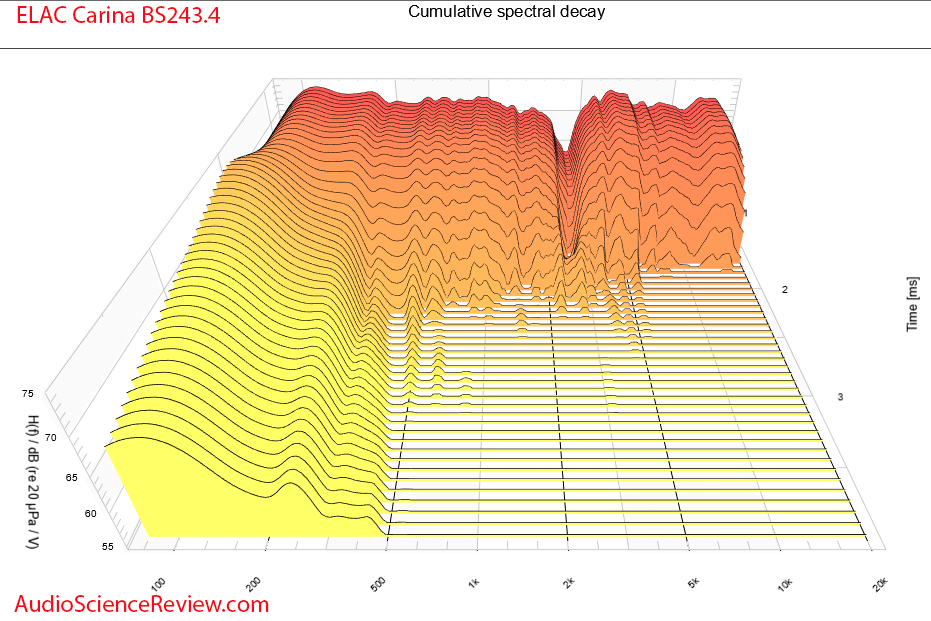 Impedance is kept above 4.5 ohm which is good for the class: 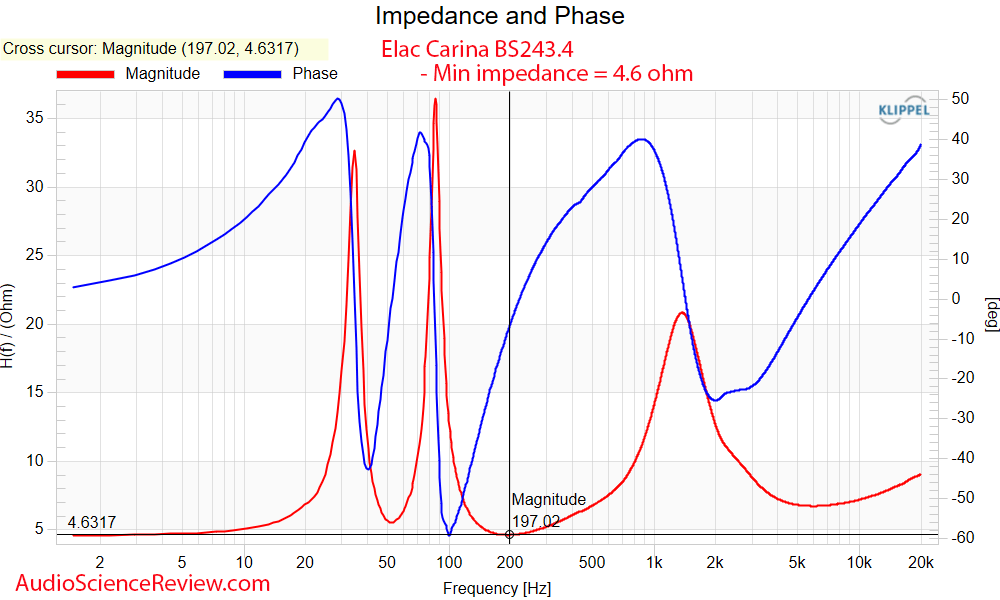 Finally, here is the step response: 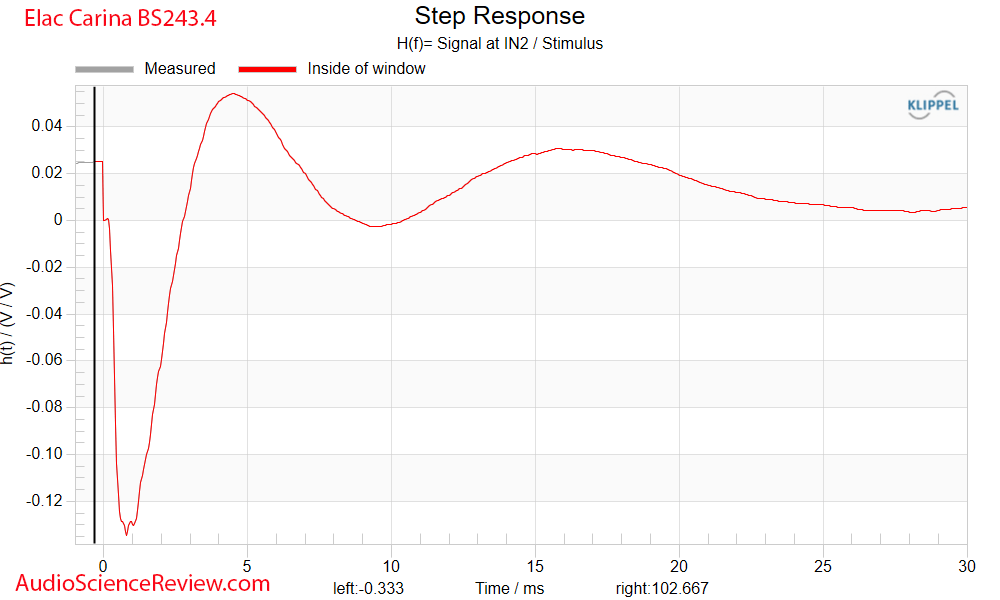 Elac Carina BS243.4 Listening Tests
Overall first impression was very positive. The wide directivity produces a large halo around the speaker which I really appreciate. There was excellent clarity to the sound as well. I could stop here and say I can't find anything wrong but best to correct the response and compare: 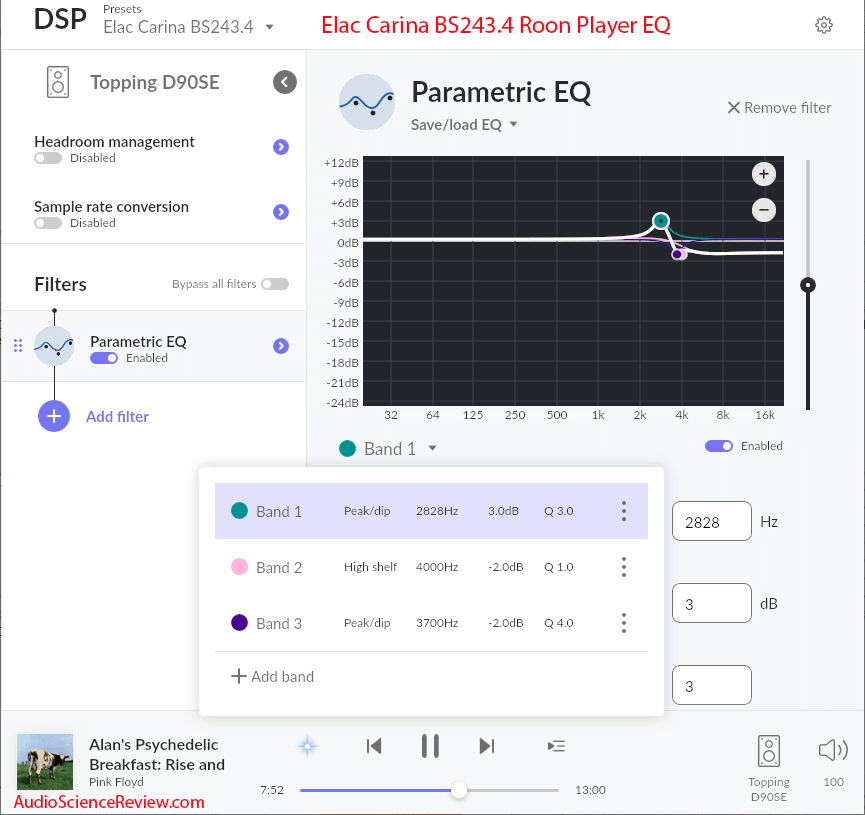 With the correction in place the space around the female vocals opened up nicely and was definitely my preference. Overall signature was a tad bright but that brought brilliance that I liked in this case. The wide dispersion from my reflective walls probably accentuates this. Turning off the EQ caused the sound to flatten some so my preference was definitely with the two filters in place.

Lack of sensitivity was obvious with the speaker happily eating up all the power I threw at it. It attempted to produce sub-bass but what came out was clearly distorted. Above that region however, there was reasonable amount of bass response.

I moved side to side and could not detect any tonal shifts even after I got close to the speaker, verifying the horizontal wide beam width. It is a nice and liberating effect. If you can accommodate it, the Carina would make a nice center speaker for this reason.

As a sign of a good speaker, after a few tracks, I just got lost in the music and started to just listen and enjoy the sound.

Conclusions
The Carina BS243.4 comes close to a well executed speaker. But for whatever reason, decision was made to leave a response hole in rather critical region. Is this an attempt at "BBC dip" to please people believing in that? Or an oversight? The degradation is not large but it is a miss regardless. Fortunately it is easily corrected. Once there you are presented with a wide dispersion speaker with very nice sound and spatial qualities which I enjoyed.

I am going to recommend Elac Carina BS243.4 speaker.

Stereophile reviewed & measured this one, with similar results: https://www.stereophile.com/content/elac-carina-bs2434-loudspeaker-measurements
M

Would the Clarina floorstander with 2.5-way and perhaps a different midrange/woofer driver fix this dip at 2.8 kHz?
OP

MrOtto said:
Would the Clarina floorstander with 2.5-way and perhaps a different midrange/woofer driver fix this dip at 2.8 kHz?
Click to expand...

This was $1499, then ELAC dropped the price to $999 and even had some B-stock for less ($699 I think)
This may have been closed out though I am not sure.
"The room response must be averaged to recognize trends in the summation of direct and reflected signals at the microphone. The resulting curves must not be taken as a 1:1 representation of what is heard as loudness at different frequencies. The room response gives a picture of the steady state SPL, where sound generation and sound dissipation in the room have reached their equilibrium." -Linkwitz

The dip is right at the crossover. This speaker appears to use pretty high-order filters. Either the woofer lowpass is slightly too low, or the tweeter highpass is slightly too high, or some combination thereof. The response of the two drivers doesn't quite overlap enough on-axis. It could even be a parts-tolerance issue in the crossover, or it could be the best they could do with reasonable tolerance (price) parts.

good speaker but the resonance

Thanks for your review Amir!

Well, hm ... Sensitivity was about 4 dB lower than average (roughly 83 dB) and that distortion. If you get irritated at such distortion levels.Maybe you should think about it regarding these speakers?

Thanks for the review, Amir.

You forgot the horizontal directivity (color) graph ?
Or you decided to go for the plot only ?
OP

You forgot the horizontal directivity (color) graph ?
Or you decided to go for the plot only ?
Click to expand...

amirm said:
Oops. Added to the review. Thanks.
Click to expand...

Thanks
This one is very good here, by the way.

I've been meaning to ask this for a long time: what's the difference between the Total Early Reflection (green line) and the Estimated In-Room Response? They look identical to me.
OP

GWolfman said:
I've been meaning to ask this for a long time: what's the difference between the Total Early Reflection (green line) and the Estimated In-Room Response? They look identical to me.
Click to expand...

It is used for the upper range of response. For the lower range, sound power is used. So it is a stitched curve.
Amir
Founder, Audio Science Review
Founder, Madrona Digital
Review Thread Rules
My Technical Background
My YouTube Channel

In today's market, I'd not mark it highly really, especially as the response errors are right where our ears are usually most sensitive - andnot match of amp or bits of wire is going to sort it. I'm probably way behind, but I've never liked AMT tweets on top of cones, no matter how fancy as the 'tinsel effect' seems magnified somehow. I need to listen to some Adam monitors though, but even these I think show it a bit.
Tear down these walls, Cut the ties that hold me, Crying out at the top of my voice, Tell me now if you can hear me...............
S

Nice. German speaker measured. Nice to see 283.3 here but I understand that it can not be sent so simple way.
S

BrokenEnglishGuy said:
good speaker but the resonance
Click to expand...

Dip is maybe because of reverse polarity. Manufacturer mistake?
OP

The dip shows up to lesser extent in stereophile measurements. So it is part of the design.
Amir
Founder, Audio Science Review
Founder, Madrona Digital
Review Thread Rules
My Technical Background
My YouTube Channel
M

GWolfman said:
I've been meaning to ask this for a long time: what's the difference between the Total Early Reflection (green line) and the Estimated In-Room Response? They look identical to me.
Click to expand...

If you look at the Spinoramas I post where the in-room is included, you’ll see that they are indeed very similar but not identical. The in-room is a 12%/44%/44% weighted average of the listening window/early reflections/sound power.
Loudspeaker Data & Preference Ratings
You must log in or register to reply here.