Between my son and me, we do our bit in the preservation of old cameras and good old glass. Notice I didn't use the adjective good in the former case
Some of them are good -- some are just... interesting. 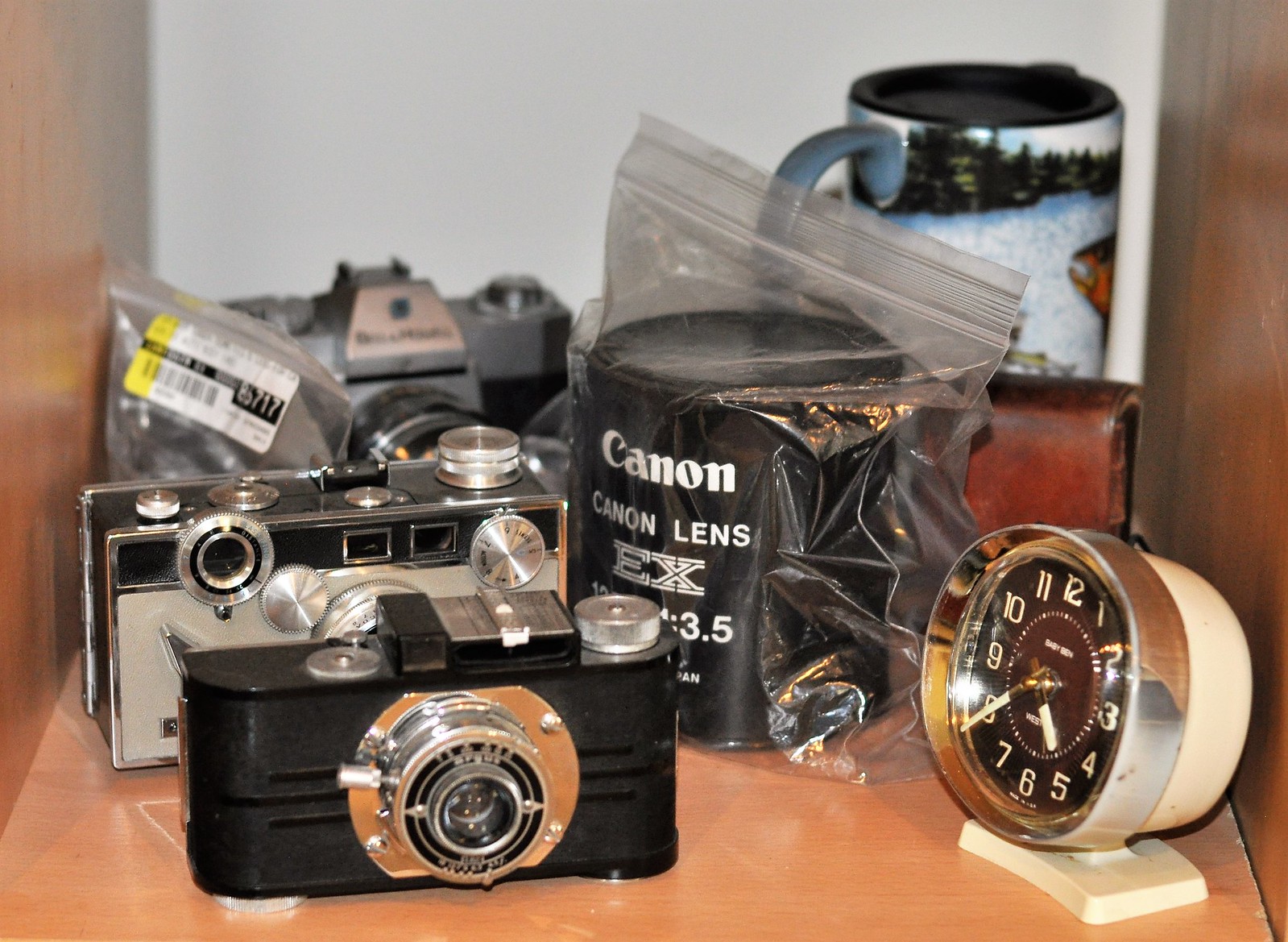 My son is seriously into cameras, classic optics, photography, and mathematics. 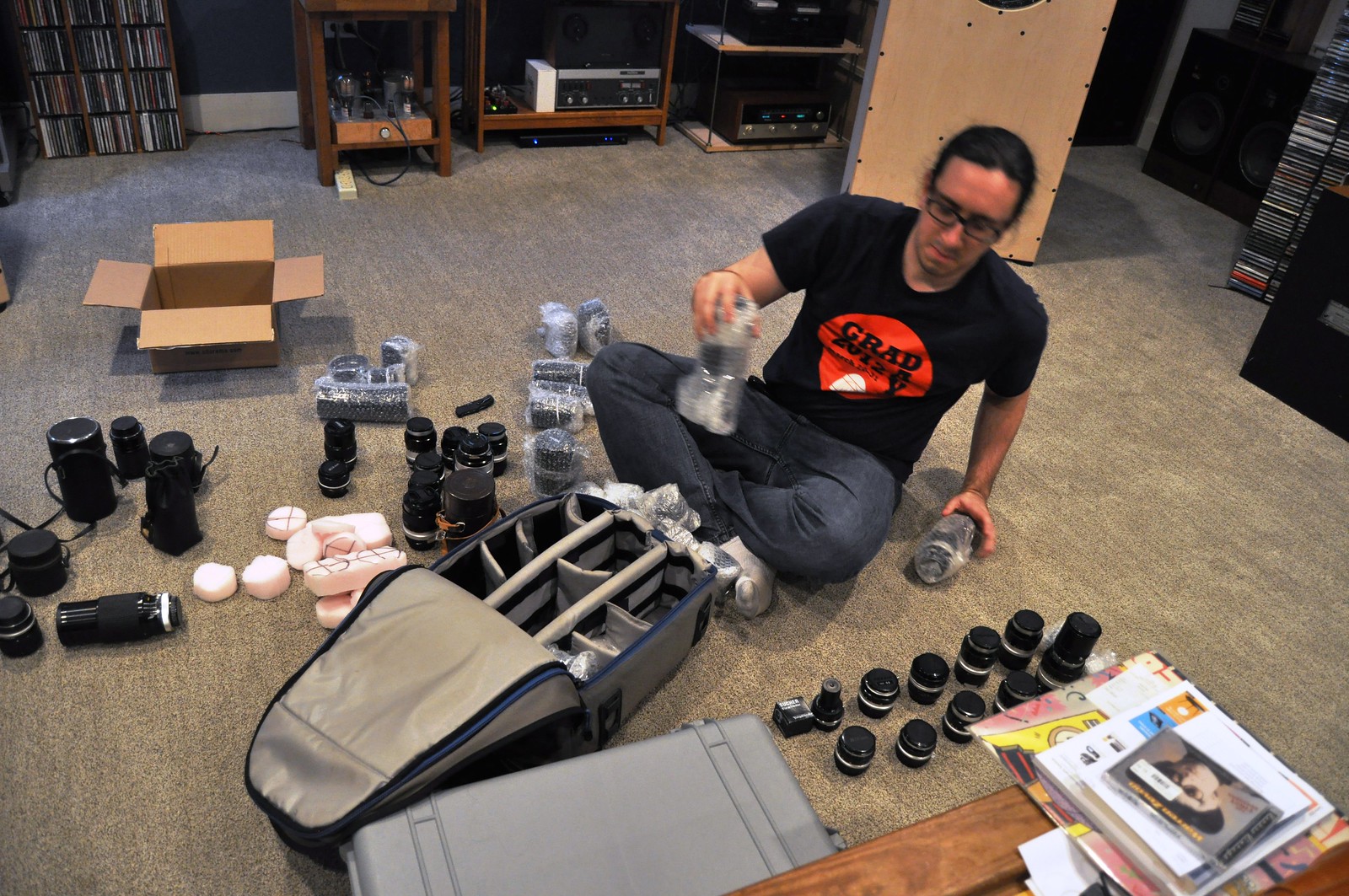 He is a good photographer... I am not.
http://icouldbeahero.blogspot.com/

EDIT: PS Sorry that most of the photos are reruns.

snapsc said:
One of the problems when you have a pretty good business that is under attack is that you feel that you have to use conservative measures to defend it so as not to "really screw things up". What the camera business needs is probably a bold jump forward where one of the big 3...sony, canon, nikon include some game changing software...similar to what apple is trying to do with their new iphone 11 night mode.
Click to expand...
Sony already did that to a certain extent. They were the ones that made the deep dive into higher quality mirrorless cameras.

What might save the camera industry is that a generation of people growing up with good cameras in phones might turn to cameras eventually once they have more disposable income. Just as I believe that the major headphone manufacturers are now benefiting from the younger generations who grew up with Apple earphones and Beats, and now they are getting into more mid-fi headphones. Camera companies have to figure out what consumers who might advance beyond a phone when they have more money will want.

https://expertphotography.com/mirrorless-camera-history/
Einstein: If you can't describe it simply, you don't understand it well.
Wombat: Or your explanatory skills are deficient.

Cameras for the masses face multiple problems that need solutions to make owning and carrying them more attractive.. including...


Size/thickness, weight, complexity, cost and limited to one function... pictures. Most people are snap shooters and not photographers.

How do you overcome these limitations and make cameras a better option than phones... or should sony camera division be sold to apple phone division?

Wes said:
The purists would argue that photography is wet plate cameras only...
Click to expand...
Camera Obscura for true purists?? 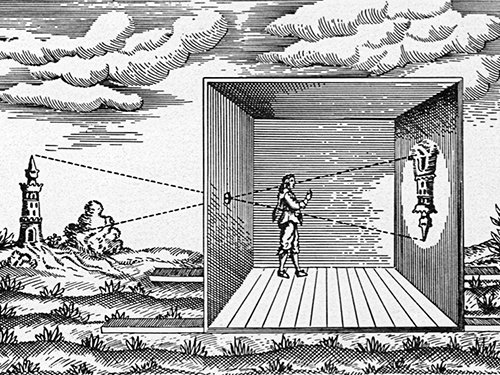 Dust already?
Einstein: If you can't describe it simply, you don't understand it well.
Wombat: Or your explanatory skills are deficient.

Oh, come on. I just want to take photos with great image quality, and any camera that can do it is good.
Then your life becomes a travelogue
Of picture-post-card-charms

Ron Texas said:
Oh, come on. I just want to take photos with great image quality, and any camera that can do it is good.
Click to expand...
It's hard to justify a brand new camera just for pure image quality. Typically people buy the new ones for features and ease of use. Even my Canon 5D camera from 2008 with its starter 24-105mm f/4 lens can still take very sharp images even at night, and cell phones themselves are catching up to dedicated camera for night shots. Though I haven't seen a smartphone camera that can take this crisp shot with their night mode ability against a 2008 camera that took this shot 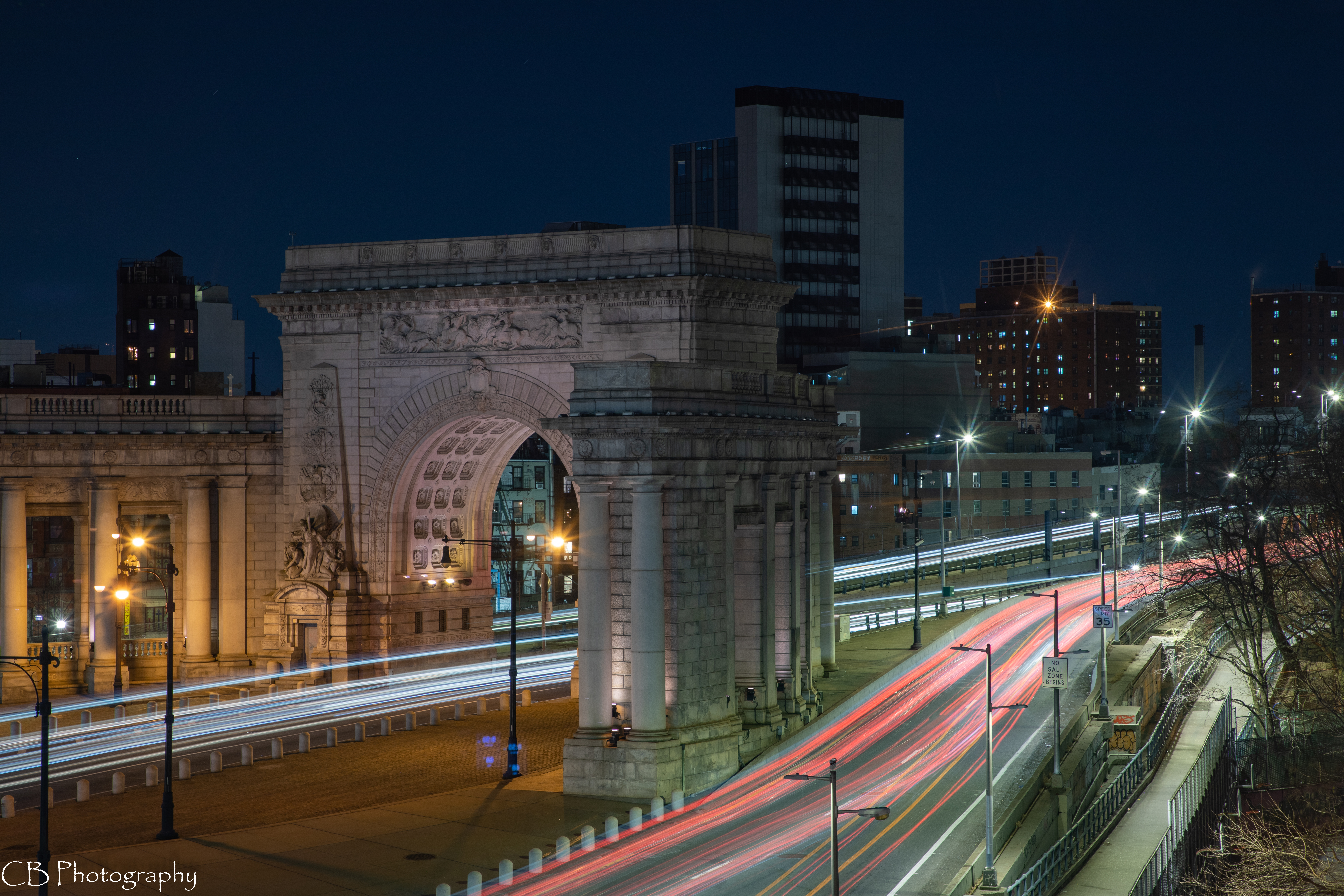 Ignoring what one can do with photoshop...most great PHOTOS are the result of planning and waiting...which most people have no interest in doing...hence what they really want is a good picture (snapshot)...from a pretty small, easy to operate, correction software automatic device.

I'm not immune to the siren song of superb MTF lens performance or the ability of some cameras practically turn nighttime into day with their incredible low-light performance, but I have to admit that the amount of satisfaction I get often has little to do with how much I paid for the equipment!

I took the photo of the buildings late in 2019 using a 1960s film camera I had purchased for about $120. If you look closely, you can see hints of abundant chroma noise, because the scenes were shot with ISO 800 color print film from a half-frame 35mm camera, but I wanted to see what I could do with it, noise and all. Half-frame 35mm is fun because there's so little to worry about: Camera relies on battery power only for it's light meter, and with 72+ exposures from a single roll of film, carrying only the film already loaded in the camera becomes an option.

Photo of the camera was itself shot on film, albeit, ISO 100 film from a Bronica medium format camera.

We need to find out what Ken Rockwell thinks. He sure knows his audio and he's always telling readers what "the pros are doing".
M

I even have a Big Ben alarm clock !

Not saying that there are no technical differences, but these photos were taken with Olympus Pen-FT (film), Ricoh GR, a modern high performance compact camera, and iPhone 11 w/Deep Fusion.

JeffS7444 said:
Not saying that there are no technical differences, but these photos were taken with Olympus Pen-FT (film), Ricoh GR, a modern high performance compact camera, and iPhone 11 w/Deep Fusion.
View attachment 49748 View attachment 49749 View attachment 49750
Click to expand...
IMHO it's kind of uncanny how easy it was to pick out which image came from which camera, just from how the tonal range is handled.

But TBH the kind of neurotic pixel peeping I was reflexively doing also reminds me a lot of audiophilia. I definitely understand why the general public just wants point and click with good automatic processing.

For no particular reason, here's a FED-2 that I restored (repainted, replaced shutter, etc) 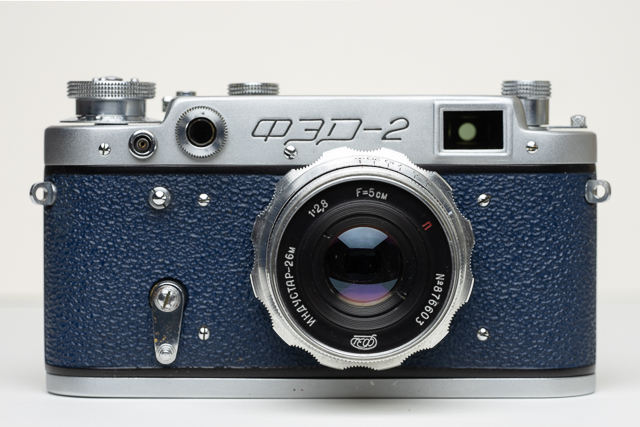 Soniclife said:
All that is true, unless you need all the subject tracking and auto focus you can get, where currently DSLR rules, though mirrorless has some trick modes that help it fight back. I'd don't need it so I don't have a DSLR.
Click to expand...
I wrote a longish post and ... lost it. Shorter version. All these are electronics. DSLR do not offer any inherent optical advantage for these features to work. As a matter of fact the absence of the mirror and its associated mechanism would make these better. Take for exemple fast frame per second. There is no mirror to flip thus the limit would be the duty cycle of the shutter and that of the sensor. Back in the days of rangefinder, one could invoke parallax: what you see in a rangefinder viewer cannot be what the sensor or film sees. In these days of electronics, the viewfinder sees exactly what the sensors sees. Including depth of field.

Please name just one optical advantage of the DSLR solution over the mirrorless.

FrantzM said:
Please name just one optical advantage of the DSLR solution over the mirrorless.
Click to expand...
Theoretically there might not be any, but the real world implementation of fast moving subject tracking on pro DSLRs is still ahead, probably the several extra decades of optimisation, and the dedicated focusing module, and the lens motors being optimised for phase detection over contrast detection.

FrantzM said:
Please name just one optical advantage of the DSLR solution over the mirrorless.
Click to expand...
Theoretical advantages of DSLR (that I can think of):
1. No need for on sensor phase detect AF which can create artifacts on images.
2. Image sensor is not always on and thus may operate at a lower temperature, therefore lower noise.

Advantage of mirrorless (that I can think of):
1. Lens to sensor distance not limited by the presence of a mirror, which is one fewer optical design compromise.

that has nothing to do with SLR. It can and will be easily implemented and actually better in mirrorless. The advantage of an SLR ithe days of film, was that it eliminated parallax and allowed a preview of the depth of field, Most people don’t use that feature anyway so dim the view becomes. They thus become the design of choice for the top of the lines. A DAL offers absolutely no inherent advantage over à mirrorless. The contrary is however true. Mirrorless is a better design. To repeat all these modules will fit ina mirrorless and

NTK said:
Theoretical advantages of DSLR (that I can think of):
1. No need for on sensor phase detect AF which can create artifacts on images.
2. Image sensor is not always on and thus may operate at a lower temperature, therefore lower noise.

Advantage of mirrorless (that I can think of):
1. Lens to sensor distance not limited by the presence of a mirror, which is one fewer optical design compromise.

IMO, as the optical advantage of mirrorless is more meaningful, mirrorless has the overall advantage.
Click to expand...
+1

I don't see how the sensor doesn't remain on. most of the time in a DSLR either.
Last edited: Saturday at 7:40 PM

Another advantage I forgot to mention for mirrorless is AF accuracy. Mirrorless performs its AF using the image sensor itself. DSLR does not and requires calibration. Also, if there is any focus shift when a lens stops down, a mirrorless can be take care of it by focusing with the lens stopped down. If you do the same with a DSLR, the view in the view finder will likely be very dim.
Last edited: Saturday at 9:08 PM
You must log in or register to reply here.
Share: Facebook Google+ Reddit Pinterest Tumblr WhatsApp Email Link