Tube Rolling: Does it Make a Difference?

Wouldn’t test tone comparisons show if there was differences in sound?
B 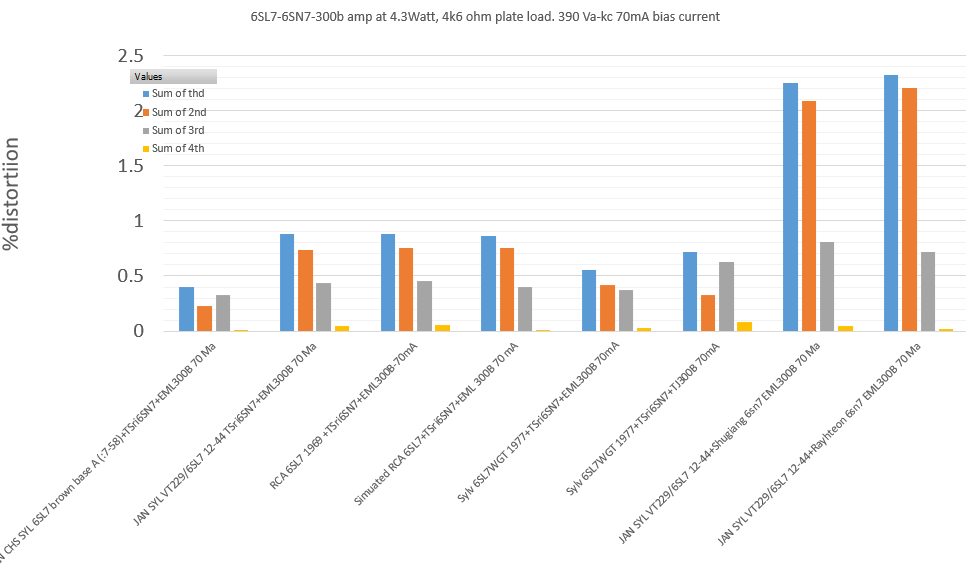 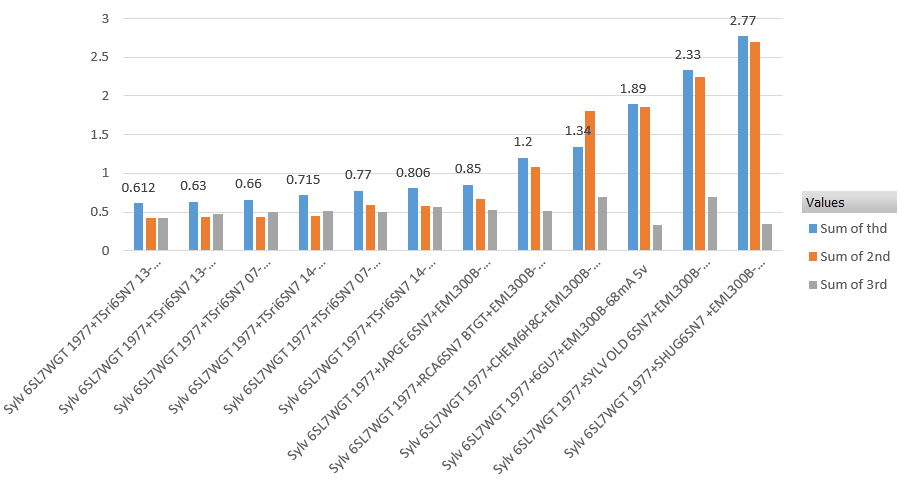 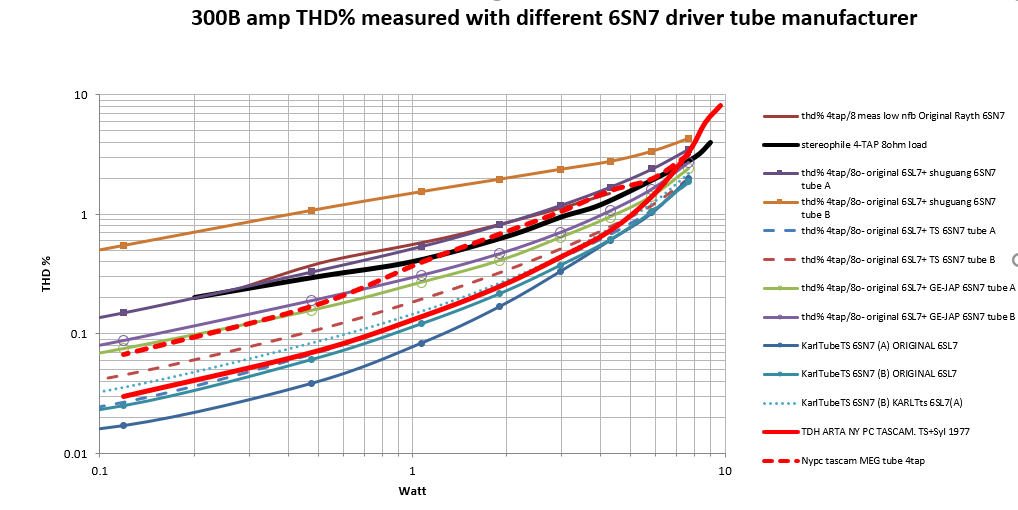 Doodski said:
O JoY! Here is a blurb on Mhdt.

"The gang of four founded Mhdt Lab in 2002 and are known as: ‘Music Heaven Development Team’.
They had decided to begin designing DACs to bring the feeling and fun back to digital. Motivated by the shortcomings of most DACs to faithfully convey, with spirit, varying styles of music, they have successfully created affordable great sounding and flexible little gems."
Click to expand...

Also from their website ...."SYSTEMS THAT APPEAL MORE TO THE HEART THAN THE HEAD."
That says it all.

MakeMineVinyl said:
As shown by a recent post where I outlined selecting two of the lowest distortion 12AX7 tubes out of a lot of a dozen, using the preamp where the tubes would be operating, there was a range of 0.3 to 0.9% THD. I would call this significant, and certainly audible in certain circumstances!

If a product was tested here and there was that wide of a range of distortion between channels, it would be declared 'broken', yet the conclusion for this test was that the differences were not that big a deal. The range of a couple tenths of a percent distortion absolutely is significant - maybe not at 2 volts, but possibly at lower levels and depending on the program material.

I know there is a baked-in bias against vacuum tubes in parts of this forum, but glossing over and dumbing down tests results because of these biases is not a good look. Better to simply not do these kinds of tests in the first place if they cannot be performed with the rigor afforded to more mainstream components.
Click to expand...

I agree. As an example, ECC82 x ECC802 in the same circuit, same test conditions. Hopefully I have put it into my archive. Please note almost 2 : 1 distortion. Please note 10dB difference in 50Hz mains line. No topology change except for tube exchange. Please note slight difference in gain (peak level). 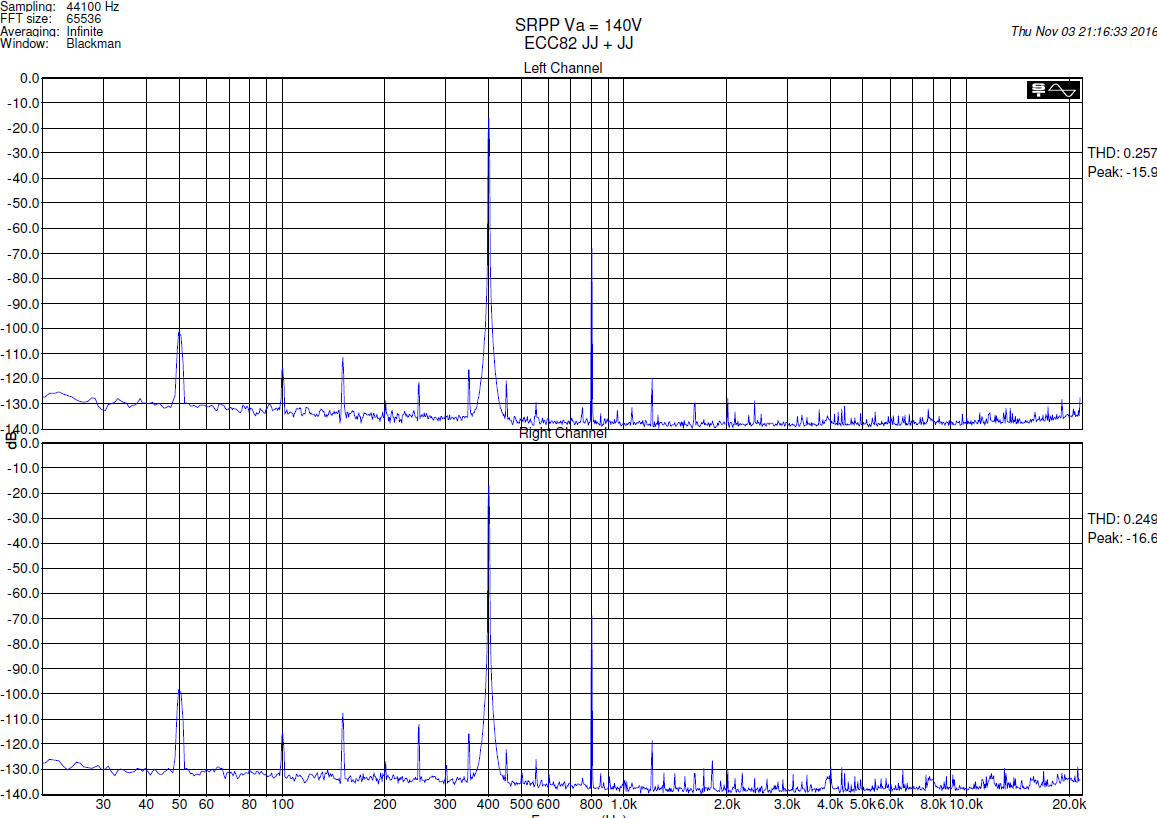 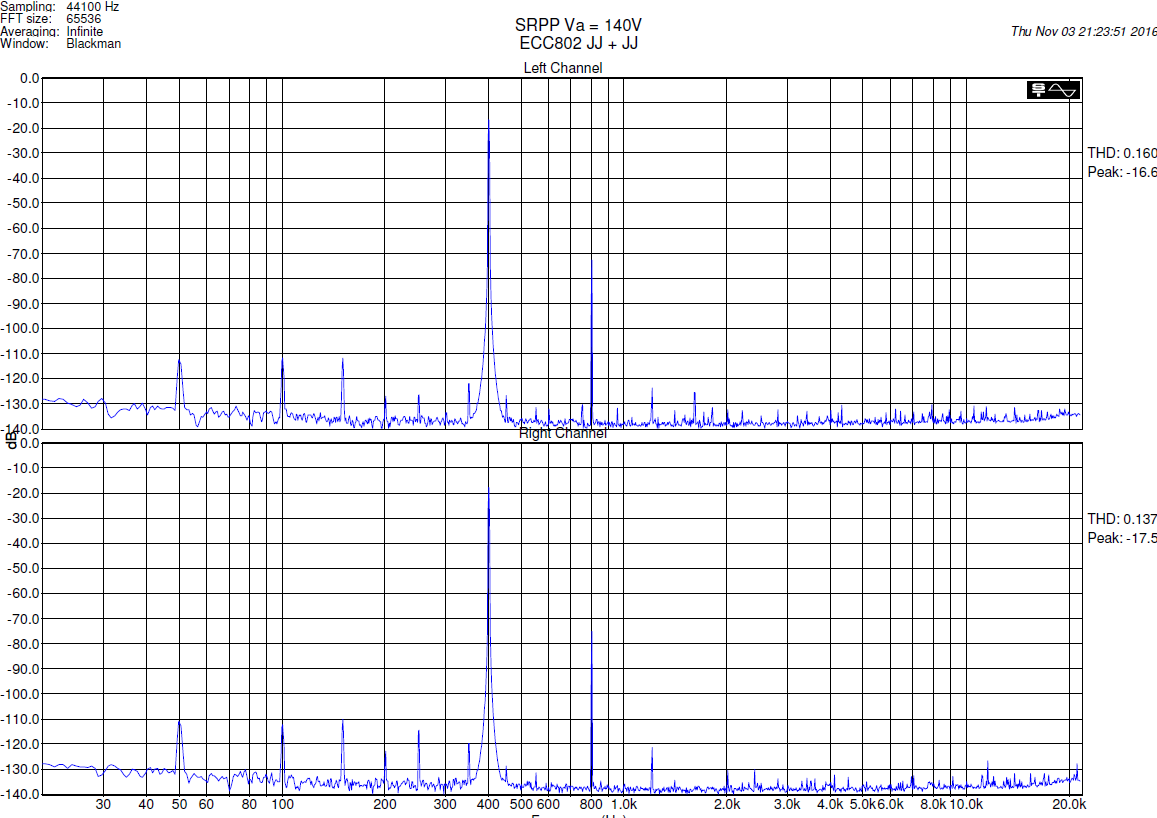 I'm old enough to remember when every store that sold TV's and radios even some corner drugstores (in NYC) had large floorstanding tube testers. You would run the testers yourself. Customers would come in with a shoebox full of tubes and test them. A waste bin was kept next to the machine for bad tubes. No one would even think of "tube rolling". Tubes were either in the "green" ranges or they were thrown away.

I would never want to go back to those days.
J

Feargal said:
I never understand why it's called "rolling tubes" as opposed to "changing tubes". It seems to imply some inherent skill involved in the process.
Click to expand...

GeekyBastard said:
The name comes from the circular rolling motion used to slide the tube's connection pins out from their sockets in the amp.
Click to expand...

Ok. I'll buy that, but how does one roll an op amp? I've tried. It wouldn't budge.
If it isn't double blind, likely is double talk.

rodrigaj said:
I'm old enough to remember when every store that sold TV's and radios even some corner drugstores (in NYC) had large floorstanding tube testers. You would run the testers yourself. Customers would come in with a shoebox full of tubes and test them. A waste bin was kept next to the machine for bad tubes. No one would even think of "tube rolling". Tubes were either in the "green" ranges or they were thrown away.
Click to expand...

I lived in USA with my parents in 1966/67. I remember those testers as well.
my audiopages
J

JSmith said:
Surely there are better things to be rolling than tubes...

Agreed as I suspect it will increase the SQ by a much, much larger extent..
If it isn't double blind, likely is double talk.

I would go the the store with my uncle (who fixed stuff in the family), if the tubes were in the "yellow" range, he would put them back in the shoe box and use them as spares.

Makes me want to see active speakers designed using tubes. Just for the visual of a speaker with tubes sticking out of it. 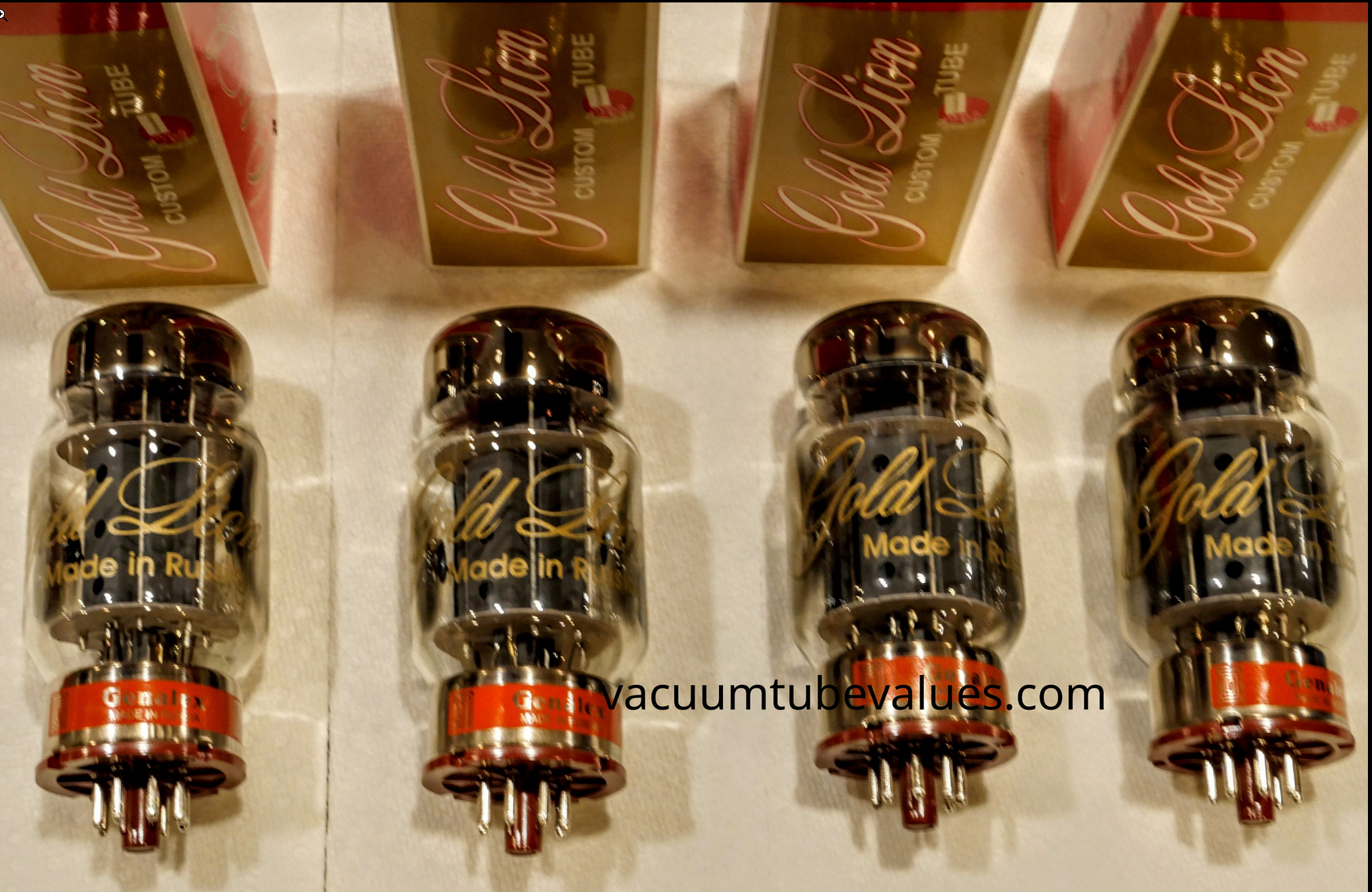 Maybe I should have never sold my MC275 [not].
Stop the Hooligan B*st*rds and their Shenanigans!

He he tube was really fun. I've surfed around tonight and checked tube related gadgets and found this.

I do not know much about tubes so I have to ask. Is this snake oil? Rubber rings around tubes, que? What would it help with? If you drive with a tube amp in a rally car that bounces on the road maybe? Or I do not know. 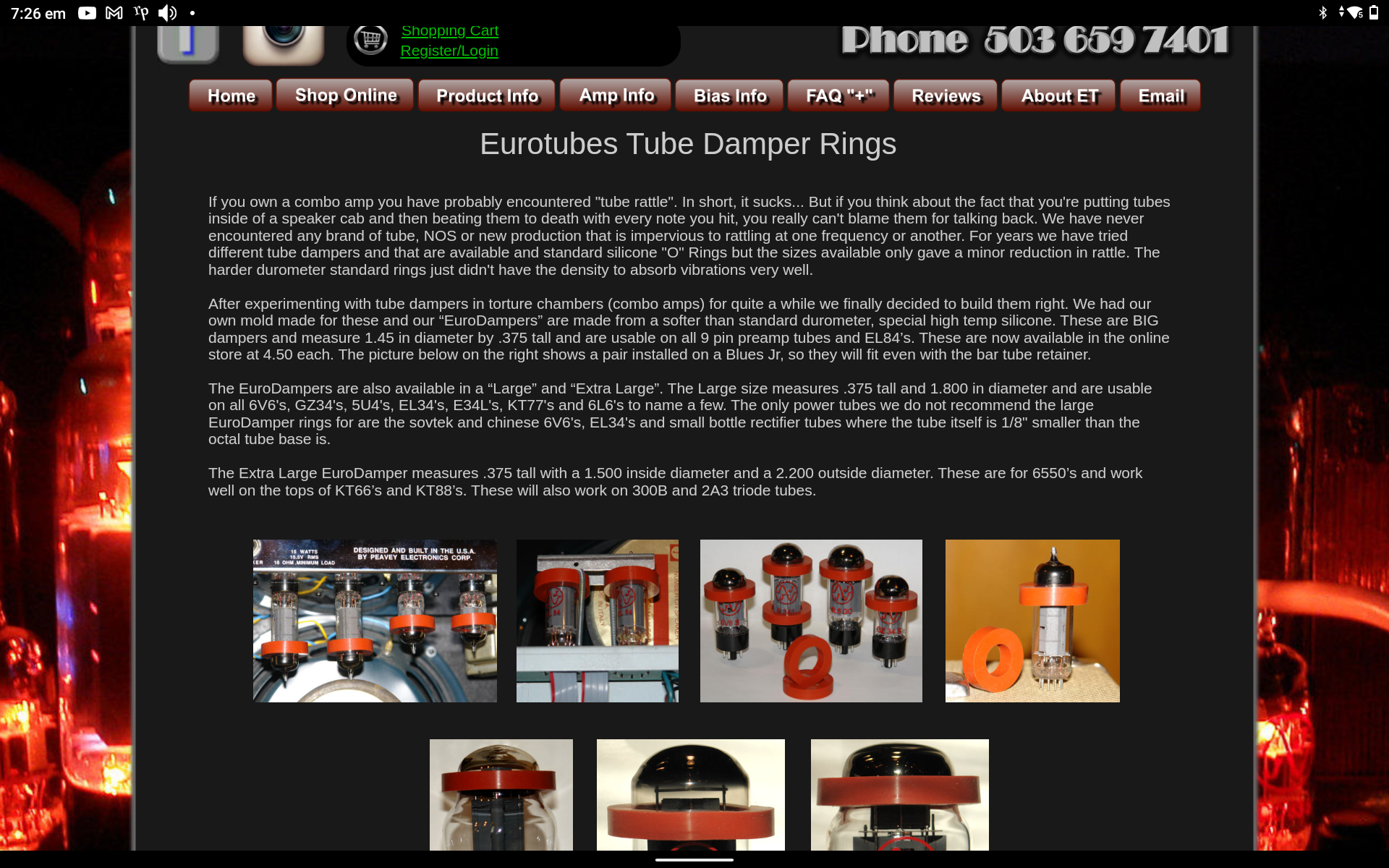 Please do opamps next!!!!
D

I am not so sure what this thread is about. Is it about a tube DAC? I think that it is more about tube rolling.

Seems odd to me to be speaking of tube rolling in the digital world, in the digital light, tubes are doomed to be thought of as poor performers standing on their heads or not.

If you want to peruse tube rolling perhaps it should be in like technology. A tube RIAA preamplifier would be a much better pick. Tubes are much less likely to be the offender when you are speaking of vinyl.

Back when I had an AP2522 analyzer on my bench I dug deep into 12AU7 noise and distortion. I used the AP2522 and a Keysight variable voltage power supply to zoom in on the 12AU7 “sweet spot”. I observed when adjusting supply voltage and bias current that the 3rd Harmonic could be easily pushed down into the noise floor.

With the tuning to the sweet spot, the noise is minimized and most of what is left of the distortion is 2nd Harmonic.

Aiming at a RIAA preamplifier a Shunt Regulated Push Pull circuit the load can be adjusted to eliminate the bulk of the remaining 2nd Harmonic Distortion.

@SIY has much experience doing this type of tube circuit tuning.

I've "rolled" tubes in my Scott 299A and heard a difference- not sure if distortion alone is the right measurement. One particular set of 7591As had an obvious increase in midrange. Couldn't tell you why or what else to measure.
I built speakers! They're awesome. Please measure them
http://www.troelsgravesen.dk/Discovery-15_Drew.htm

nyxnyxnyx said:
Please do opamps next!!!!
Click to expand...

DanielT said:
This DIY tube pre amp seems to have been decent with low distortion, or? Tube pre amp with tube ECC88

A couple of measurements of my iFi iTube buffer/pre, which uses the same tube as the MDHT. In the iTube's 6dB gain mode (I think). Pushing it a lot in the second to see where it clips. 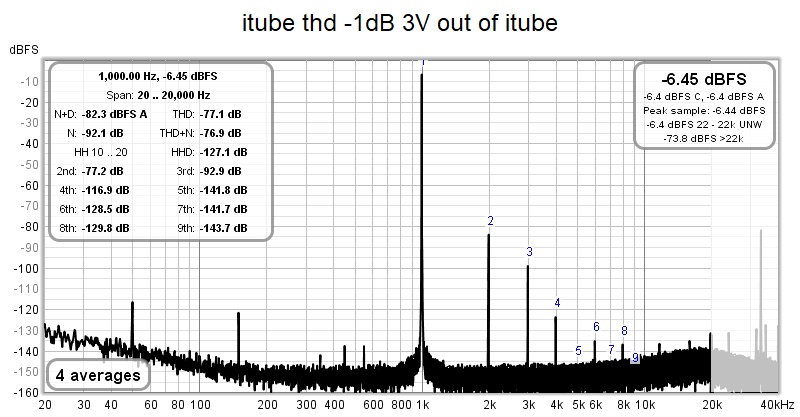 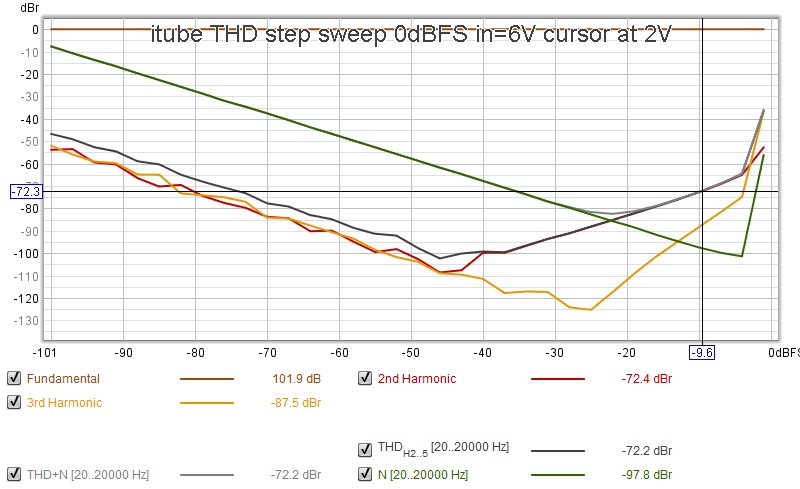 Superbestaudio people tested some tubes with the Vali 2+ recently and they tested about 8 tubes (supplied Canadian NOS, Ruskie NOS, Telefunken NOS, and Electro Harmonix new production) and found that 2nd harmonic distortion was up to 10 db lower with the fancy tubes they tried, and higher with the supplied tubes, but the distortion at the low end was higher with the Telefunken for some reason. Telefunken are expensive tubes.

They also reported that tubes sound different despite similar frequency response. I agree that tubes sound pretty different, but except where clarity is an issue, I haven't noticed that one sounds better except on certain rare occasions (Bad Boy 6SN7's have great bass and it's audible, new Gold Lion production have and nice rising extended response.) I have noticed that they do all sound pretty different however.

I've come to the conclusion that my Jot 2 is superior to all Schiit tube amplifiers by a wide margin, and perhaps as good more expensive gear that I don't own but occasionally hear at can jam. I really don't have any headphones I can think of that Jot isn't the best Schiit out there.
iBasso dx300 > [hint]
You must log in or register to reply here.