This is a review and detailed measurements of Fiio K3 DAC and portable headphone amplifier. I got talked into buying it earlier this month due to popular demand. Fo you all's sake, it better measure well!

The Fiio K3 is quite cheap for such a combo product and costs just USD $109 including Prime shipping from Amazon. As such, if it works out, it will be killer combo as far as price is concerned.

The first impressions are positive with the nice but very small looking enclosure: 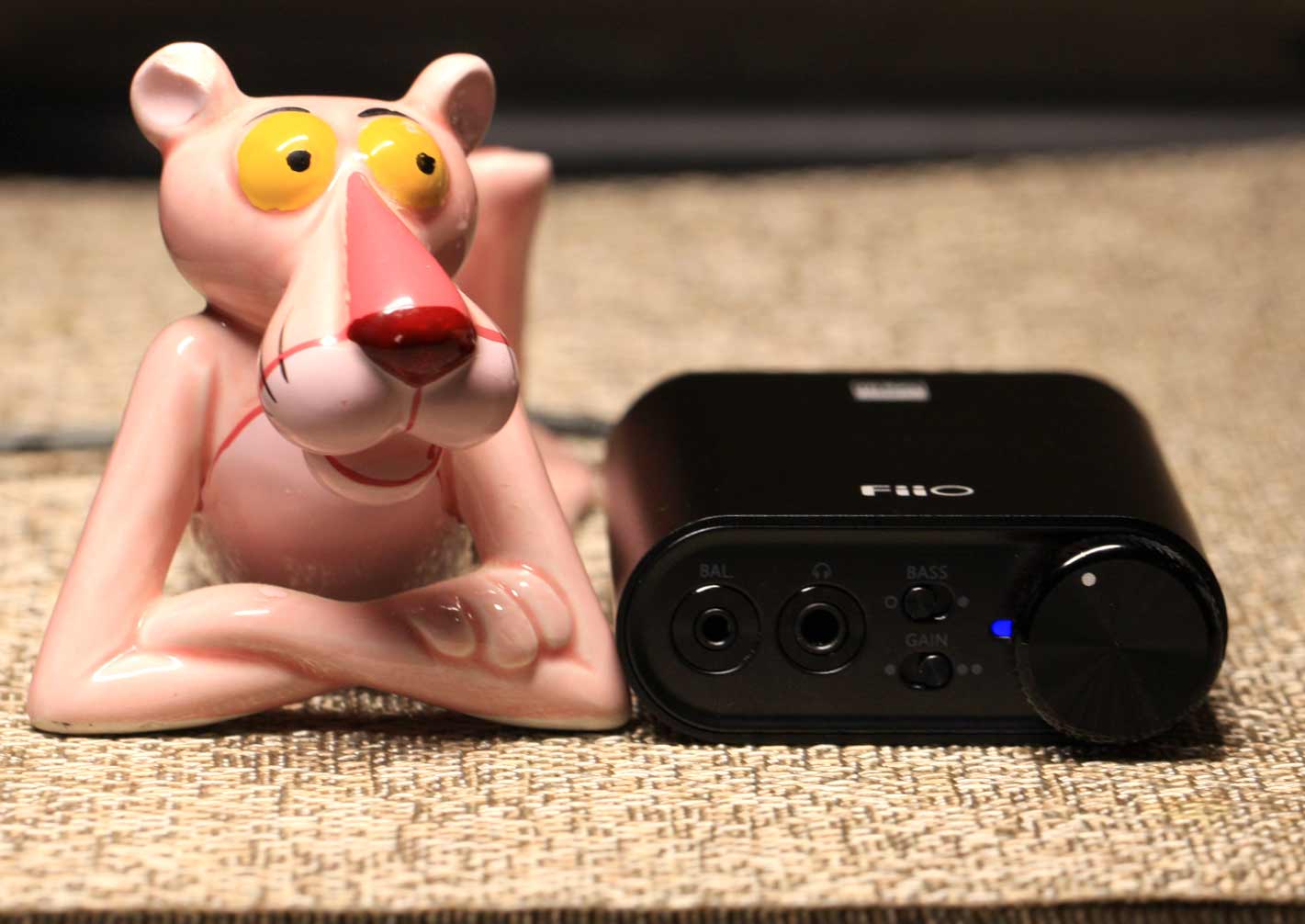 We see the typical gain switch and bass boost. Unusual in this price class is having a "balanced" output which in the case of headphones, just means potential for higher output power. Please don't confuse this with balanced inputs which provides high level of ground loop immunity. Balanced output doesn't provide such benefit.

The volume control is a rather unique implementation where an analog control is used with min and max (unlike rotary controls that keep turning). Instead of controlling the level directly though, its value is digitized and then used to control the level in the DAC. This has the benefit of providing very precise channel matching.

The rear end shows the typical USB input but also both Toslink and Coax digital audio outputs which again I don't expect to see here given the small enclosure: 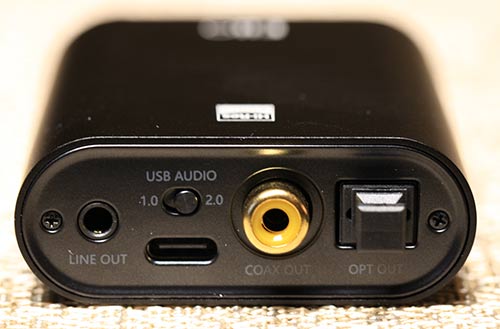 The USB input is type C which is nice. Not sure why one needs USB version 1 or 2 switch these days.

There is a line out 3.5mm jack as you see. Normally these jacks are just wired to the front headphone jack but here, performance was different as you will see later.

Being small and despite being metal, the unit drags easily due to light weight and shiny surface. It would at least need some sticky feet to make it stay put if you are going to put it to desktop duty.

DAC Measurements
As I noted above, initially I was going to run the dashboard view using the headphone jack but then realized that the headphone out does better: 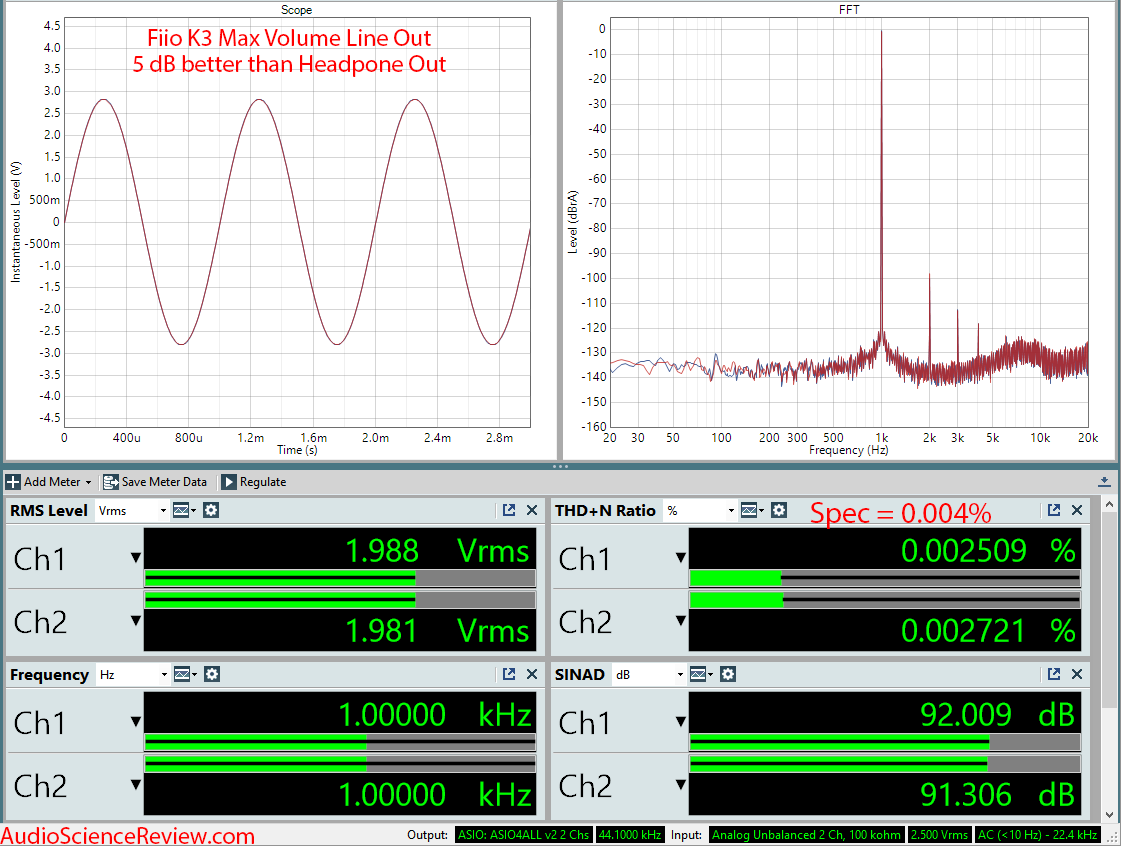 SINAD was in high 80s with the headphone jack. This may be instrumentation difference as the rear jack connects more solidly but I don't think so.

The distortion spec beats Fiio's own rating of 0.004%. Maybe that is for headphone out? Regardless it is good to see honesty here.

Looking at the FFT spectrum of our 1 kHz tone, we see the highest distortion product is at about -98 dB yet our SINAD is 92 dB. This indicates that the SINAD which uses sum of distortion+noise as its basis, is likely dominated by noise, not harmonic distortion. The FFT reduces noise level by some 30+ dB here letting us see distortion products so it is misleading in that regard with respect to noise level of the product. We can tease out the issue here with other measurements.

As it is, the SINAD is "OK," falling in tier 3 performance class of DACs tested:

Note that the output voltage is just shy of 2 volts which is fine for line out but this is as much as we get for headphone out jack just the same. This means that we will have trouble generating enough power for high-impedance headphones.

Linearity is unusually good for a little device like this: 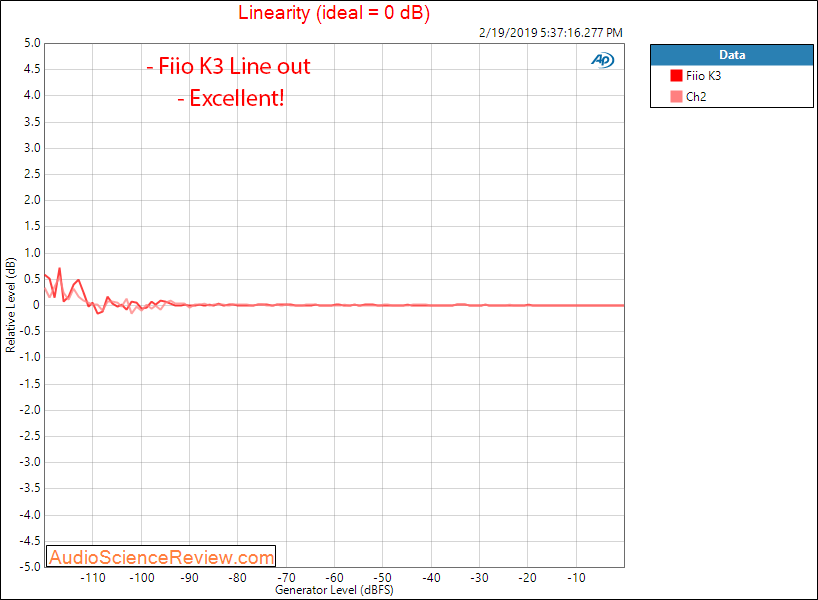 Jitter measurements at first look good with no spurious spikes but that is due to higher noise floor as noted earlier: 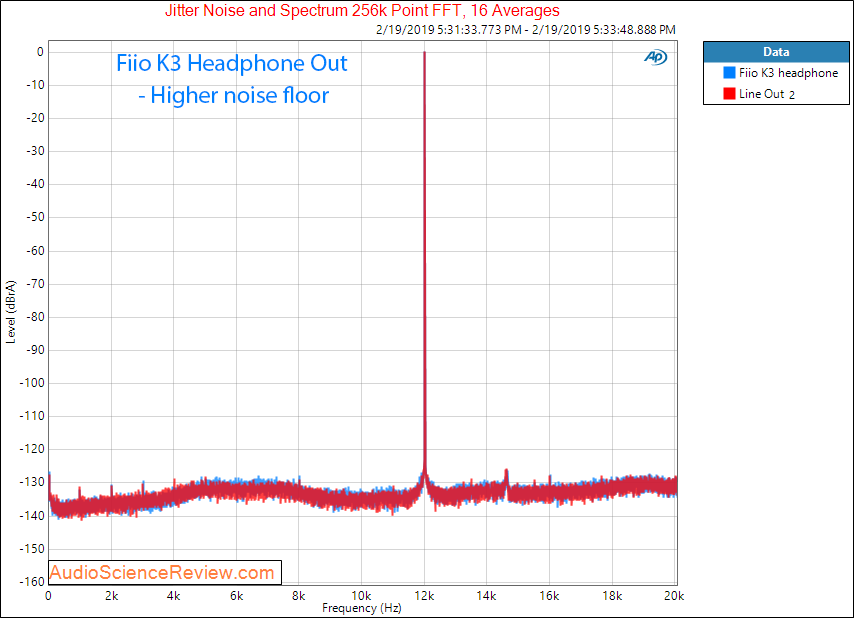 Excellent DACs push that noise floor down to -150 dB or so, allowing more spikes to be visible (if they have them). 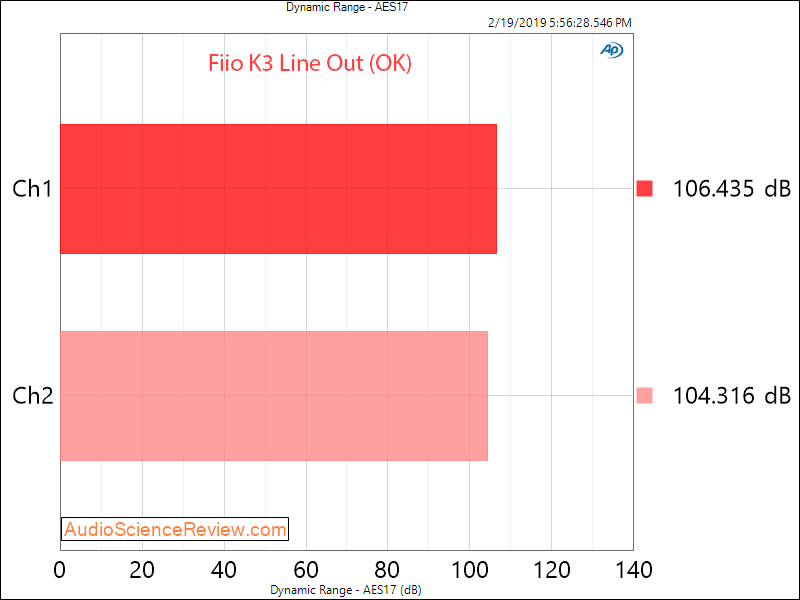 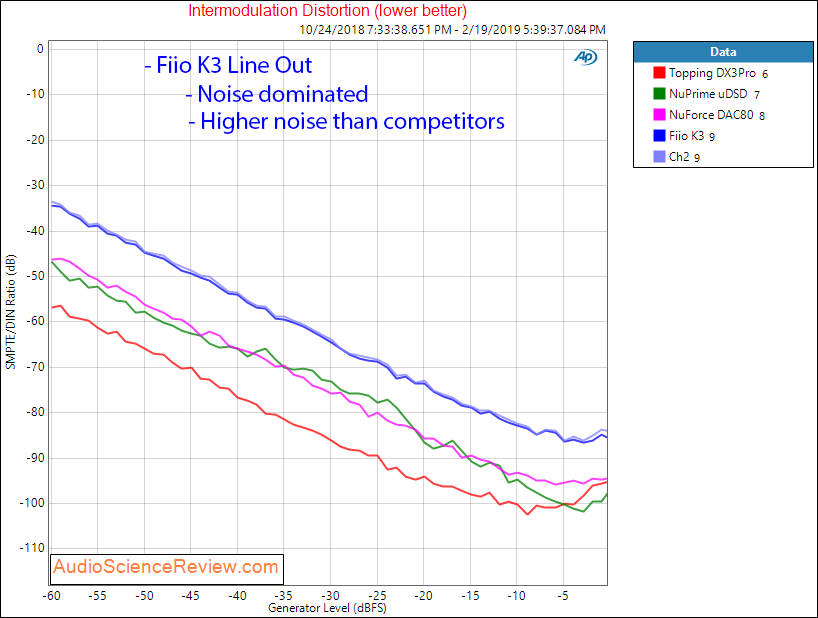 Any dreams you had of replacing a Topping DX3 Pro or even NuPrime uDSD with the Fiio K3, should be shattered by now. 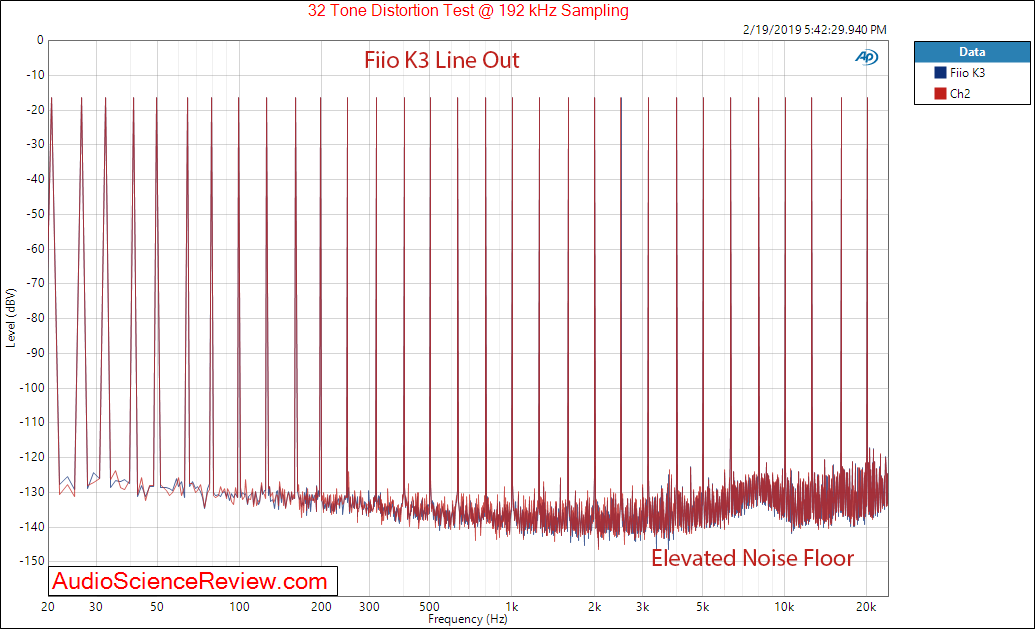 Need even more evidence of high noise floor? Here it is: 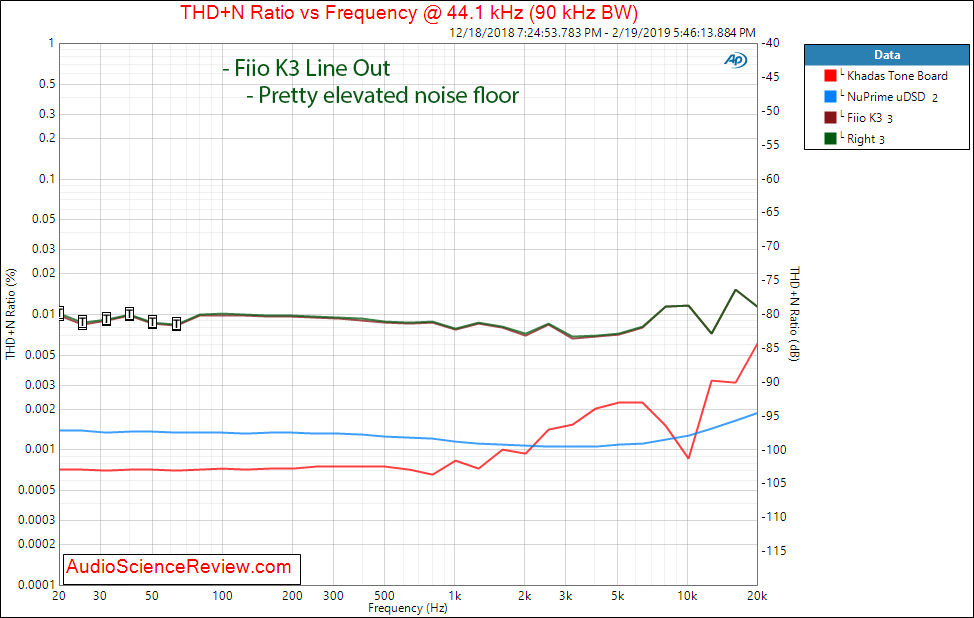 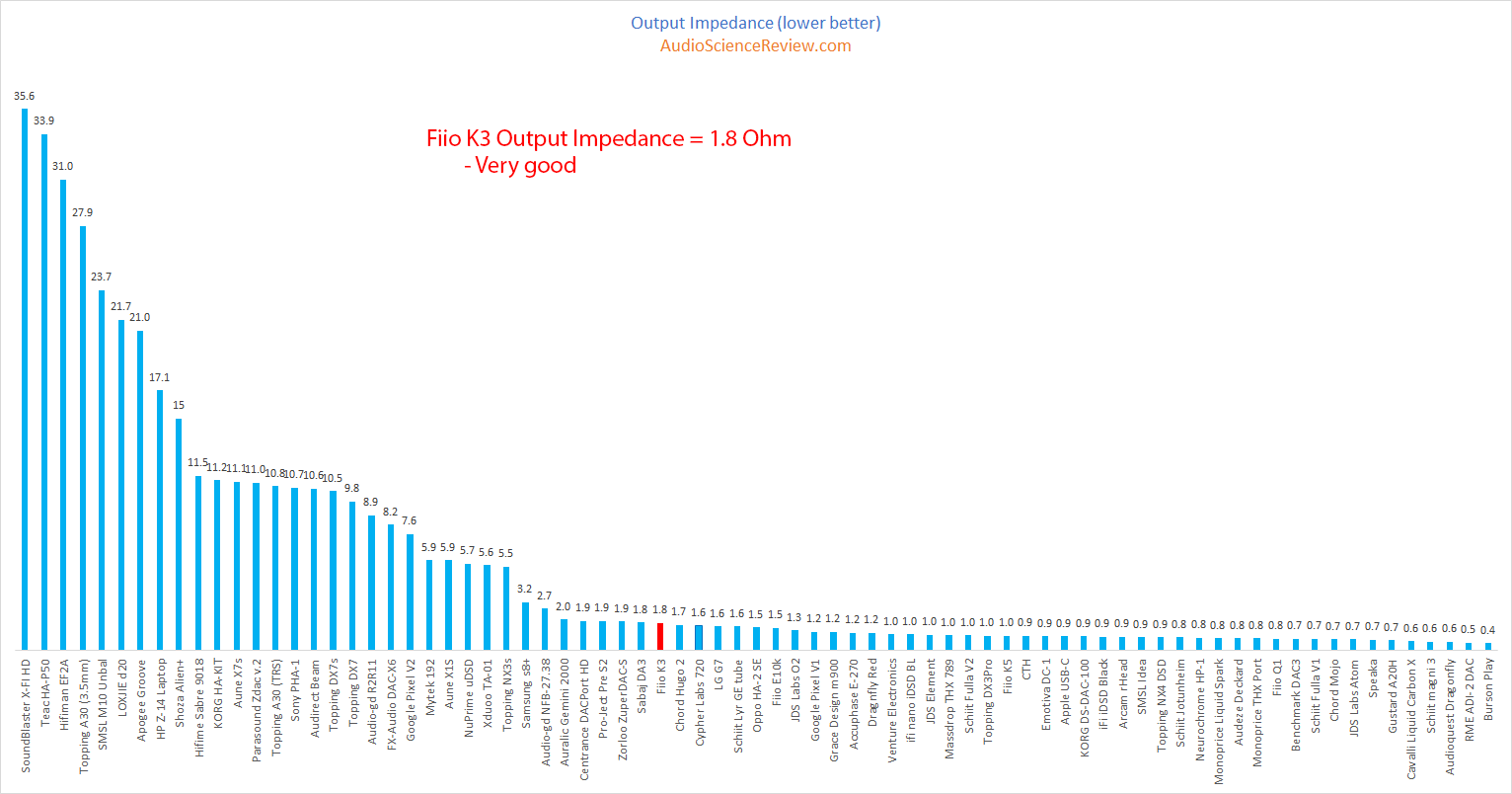 Channel balance as expected is superb: 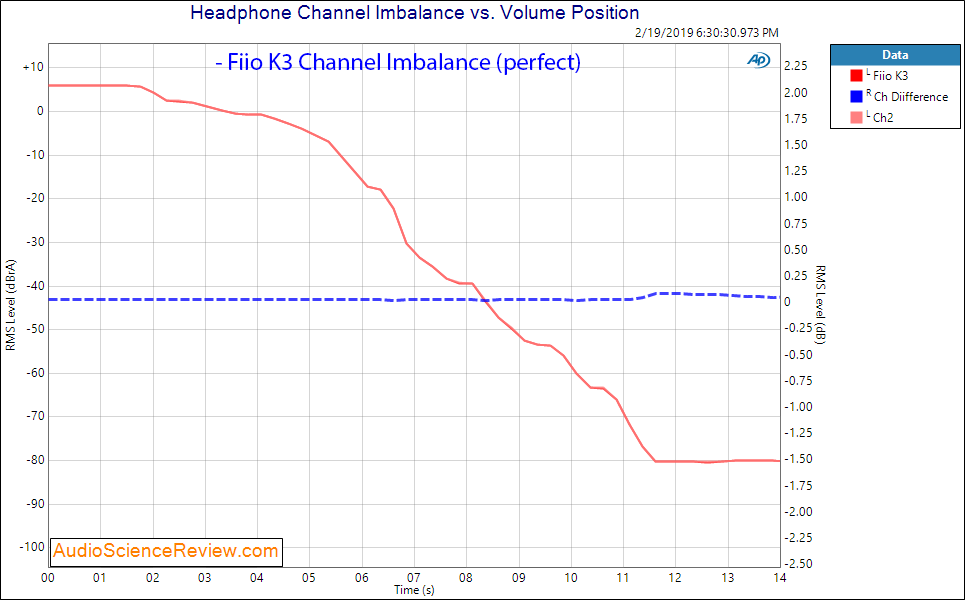 Let's get into all important power versus distortion+noise, first at 300 ohm: 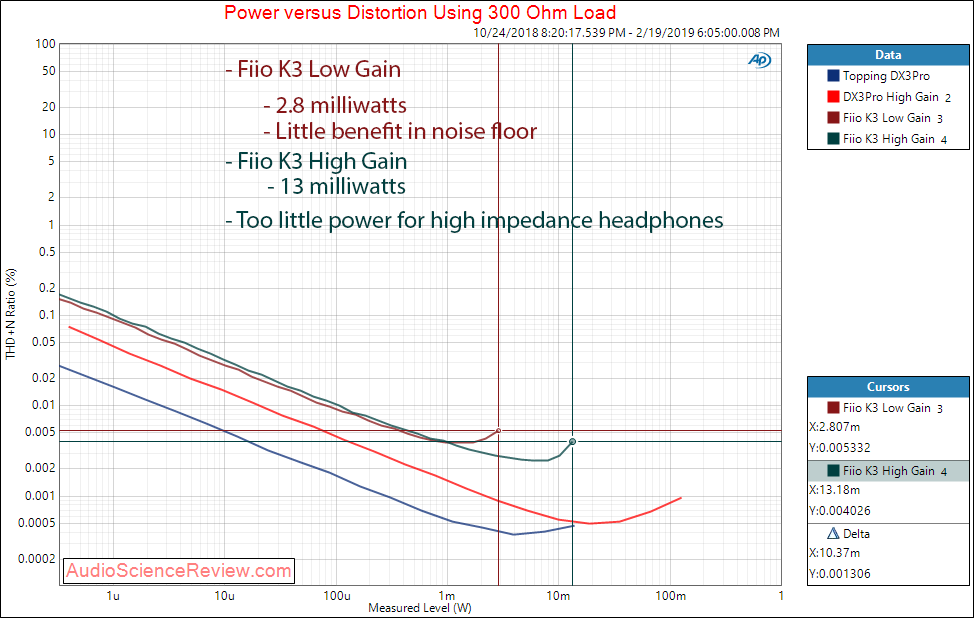 As predicated, the low output voltage become problematic generating output levels that is even short of $10 dongles at just 13 milliwatts in high gain. I like to see 100 milliwatts here for ample power to drive high impedance headphones such as Sennheiser HD-650.

Switching to 33 ohm load, we are now current limited so let's see how the K3 does: 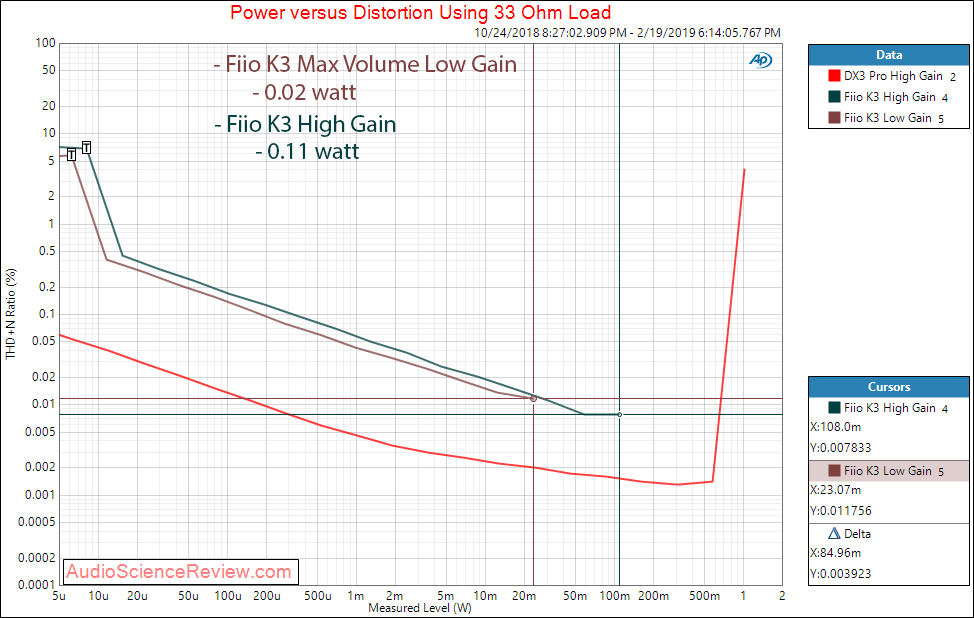 We have a lot more power now at 108 milliwatts. As a way of comparison, the Topping NX4 DSD produces 147 milliwatts here (and 58 milliwatts with 300 ohm load).

I tested the balanced output with my 50 ohm load: 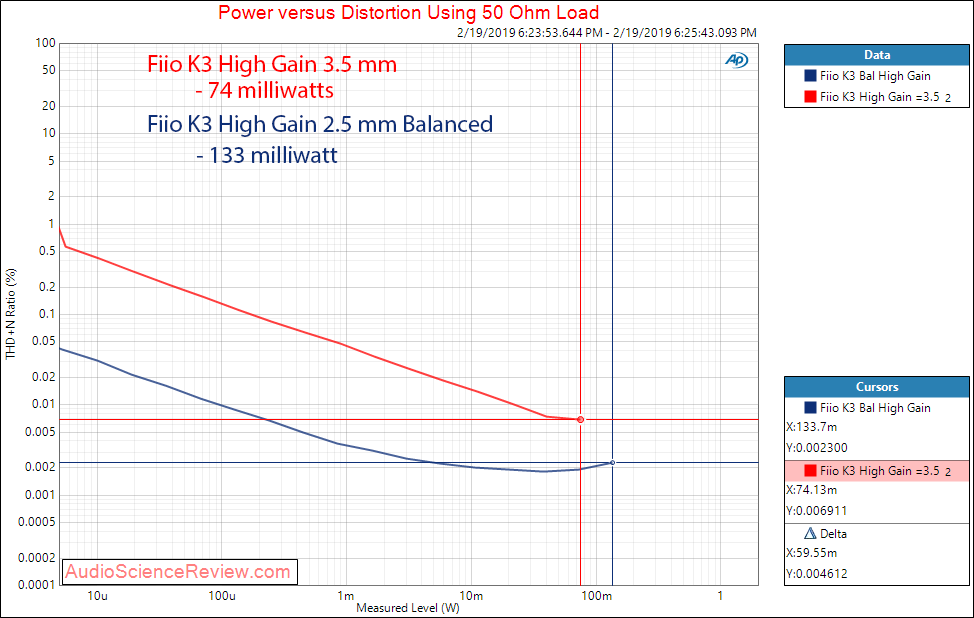 We double the power here which is nice. Unexpectedly, the noise/distortion level also goes down substantially in balanced mode.

Listening Tests
As usual, I started my listening tests with the Sennheiser HD-650 representing high impedance headphone class. As predicted in the measurements, there just is not enough power here. Bass notes were weak and almost in hiding.

Switching to Hifiman HE-400i to represent low impedance headphones, performance improved a bit with higher output level but again, bass notes were on vacation and nowhere to be found.

I briefly tried my AKG K92 which is far more efficient than the above two and it did produce higher output here, enough to keep me away from max volume.

Conclusions
The Fiio K3 seems to set rather low targets and it meets it. Problem is that we are not about low targets here. We want excellent performance here especially in the headphone amplifier section so that the headphone is the limitation, not the amplifier. In that regard, the anemic 2 volt output of the Fiio K3 becomes a limit for high-impedance headphones. Likewise there is not enough current for low impedance headphones to drive them well.

Balanced output may make up for that but if you are going to target that, why not get a better performing DAC+amp? The Topping NX4 DSD costs a bit more ($160), but it has built-in batteries that allows it to have much better drive capability. Its DAC portion is also superior.

Net summary is that this is a nice little DAC and combo but fails to meet our rather high standards here. If you find use for its unique feature set, and can live with its modest output level, you are welcome to get it. But I can't recommend it generally.

The Fiio K3 is available for sale if someone wants it.

This was quite the anticipated review thank you, @amirm

To be honest. It does do a fair bit better than the Fiio Q1 Mark II. Considering the noise is better on its balanced output, if you can use that output either way with some cable you already have (or solder one yourself), then value is decent at $109 for sure. The NX4 still remains the better ultra-small amp/dac though it seems. What device will push it from the top spot I wonder!

A concern is the noise. When using specifically IEMs or super sensitive headphones (audio technica AD series come to mind), I think one is much better off with an iFi nano BL that has an included IEMatch. That one is again quite a bit more expensive though. You get what you pay for?
Last edited: Feb 20, 2019

Can you please measure the balanced headphone output?

So, besides the Topping NX4 and Fulla 2, what other devices are competing at this price range? Needs to be portable/USB or battery powered.
OP

amirm said:
I did. That was the 50 ohm test.
Click to expand...
I'm guessing he's wondering about any SINAD improvements under balanced
OP

Veri said:
I'm guessing he's wondering about any SINAD improvements under balanced
Click to expand...
You can see it from the graph:

Thanks for the review, I'm definitely gonna pass on this one. Your review is the reason I created an account here, I really like the fact that you (and other reviewers here) don't try to dumb it down for the fragrant masses. We speak the same language, glad I found you guys!
I'll have my revenge on Fortunato!

Thanks for the review! I had this unit and the build quality is indeed excellent for this price. AND... the COAX OUT option is VERY RARE to my knowledge in this price range. This little device can be an all-in-one solution for those with active digital speakers, like Genelecs.

Thanks a lot for this review!
@amirm do you think Fiio K3 can be used as a decent USB to SPDIF bridge? Tx!

amirm said:
Not sure why one needs USB version 1 or 2 switch these days.
Click to expand...
For those who are unable or forced to use Windows 7 this is really useful. For example at work I'm on a company controlled Win 7 image. At home I'm still forced to use Win 7 on my HTPC for cable card copy protection with Windows Media Center.
S

I got one a few weeks before this review came out.
Despite the measured somewhat higher noise floor, I can't really hear any noise with anything except perhaps my most sensitive in-ears (e.g. Lypertek Bevi, 7 Ohm, 106dB sensitivity) and even then it might be just me imagining things as it's barely detectable.
On the other hand, unlike some other stuff, the K3 is quite nice with in-ears and sensitive headphones, because there is some headroom in volume scaling at low volume. The volume progression on e.g. my SMSL M3 is quiet... almost there... way too loud while moving the volume knob in minute increments. The K3 has no such issue.
It's also tiny and doesn't require recharging.
Unlike the Topping NX4 and Sabaj DA2 and DA3, I haven't yet read any negative feedback regarding channel imbalance or background noise (the NX4 has reportedly both issues and the DA3 had noise reported on Amazon and Head-fi, I think). It might be down to Topping's/Sabaj's quality control being a bit flakey.

I wonder what others' experience with Topping NX4 at low volumes is here. Anyone?

Slapo said:
Despite the measured somewhat higher noise floor, I can't really hear any noise with anything except perhaps my most sensitive in-ears (e.g. Lypertek Bevi, 7 Ohm, 106dB sensitivity) and even then it might be just me imagining things as it's barely detectable.
Click to expand...
You're definitely imagining things. The measured noise is inaudible.

Slapo said:
I wonder what others' experience with Topping NX4 at low volumes is here. Anyone?
Click to expand...
The reviewed unit shows more than 1 dB of channel mismatch at low gain. Could probably bother certain people with certain headphones.
EQs for all speakers measured on ASR: https://pierreaubert.github.io/spinorama/eqs.html - Resulting spinoramas: https://pierreaubert.github.io/spinorama → choose speaker → ASR → With EQ

Thank you very much for the review.
It's a bit disappointing the scarce power for the high impedance cans
B

graz_lag said:
@amirm
Super-nice shot layout ! Adding the back, cropped image, is really very nice !
Thank you !
Click to expand...
Well, as lazy as I am, you guys called out my manhood with respect to photography skills so I had no choice but to take that task seriously.
Amir
Founder, Audio Science Review
Founder, Madrona Digital
Contributing Editor, Widescreen Review Magazine
Click for My Technical Background
Master List of Audio Reviews
You must log in or register to reply here.
Share: Facebook Google+ Reddit Pinterest Tumblr WhatsApp Email Link