Out for a few more days

Hello you all. You probably noticed I have been away from the forum a few days. Last Thursday the finished lower floor of our house which is below grade developed a leak. This quickly became a massive flood, overwhelming our efforts to keep it at bay. To make matters worse, near midnight, my wife slipped on the wet stairs and badly injured her back side and elbow. So we spent the next day at the hospital and thankfully, nothing was broken but she has been in serious pain (but getting better). We had two days of dry weather which gave us a chance to repack things of value but then the rain came and multiple flooding with it. We would spend 12 to 16 hours pumping and drying out the floor, only to get fully overwhelmed in a matter of hours.

I have bought every pump and gadget you can think of but none of them are effective with shallow flooding of quarter of an inch of water (seeping through the walls). Actually it has been so bad that in the time it takes me to go to the hardware store to buy the next thing, the house been flooding completely again! No restoration company would come to dry the house because the leak is still there. So stuck doing it all ourselves.

My builder called a crew with excavators and such over the weekend and they showed up Monday, only to make it worse and leave. So last two days has been more rounds of hell. I was drying and pumping the house for nearly 20 hours straight last nigh as the non-stop rain caused it to flood again and again! A more competent crew is here and is building a much more extensive water management system. Hopefully they get it done and it works.

Getting help of course in this environment is next to impossible. Had a great handyman I had used on other projects but he wouldn't come over to help either.

Anyway, starting tomorrow it is supposed to dry out for a few days so maybe this insanity will be over by the weekend.

I have only been able to drop in the forum for a minute or two per day. Just so much to do.
Amir
Founder, Audio Science Review
Founder, Madrona Digital
Contributing Editor, Widescreen Review Magazine
Click for My Technical Background
My YouTube Channel

K. Take all the time you need. You’ve done more than enough for these people.

Wow, that sounds awful, Amir. Hope things straighten out for your ASAP. I wouldn't want to have to go to a hospital right now, and flooding is always a nightmare.

I will continue to hold down the fort.
Screw Erin, contribute to MY nfs fund
R

^^Sorry to hear that. Water problems are a pain in the backside. Hope things get better.
O

I am so sorry to hear this!
I wish I could give you a hand. Given I can't, at least physically, I will make a small financial contribution in hopes it helps you get a hand on someone able to help you.
I wish you good luck and I am hoping the rain will subside, leaving you some rest.
Hope Madam will be well soon.
A

What a horrible predicament, I hope it's resolved as soon as possible and i wish a speedy recovery for the Mrs.

That’s awful, Amir! I hope your wife will feel better soon.
Is it ground water or is it a water pipe?

Just don't buy a Microsoft pump - purportedly it's the only thing they make that doesn't suck.

Hoping between the dry weather and new crew you can quickly implement an effective solution.

Ouch, been through something like this, really painful and costly.

Sump pumps live in a hole below the level of the floor. IF the leak drains to one area, you could drill/make a hole for the water to drain into to provide enough of a seep for the pump to work. Or if the leak is at just one point, or small area, maybe you could make a hole at that point, again providing a "sump" for the pump.

Other than that, got nothing but horrible memories and prayers you are able to fix things soon, and your wife recovers well. I have permanent knee and back problems from moving lab equipment (for COVID spacing) a couple of years ago.
Last edited: Jan 13, 2022
"After silence, that which best expresses the inexpressible, is music" - Aldous Huxley
Technical Articles: https://www.audiosciencereview.com/...and-inquisitive-minds.8121/page-3#post-808622
My system: https://www.audiosciencereview.com/...ht-our-current-setups.564/page-27#post-672877

Sorry to read that you are having such a disaster.

Best of luck! For what it’s worth, I had a bad flooding problem with my holiday house (heavy rain made a lake on the side), I built a proper, deep French trench with two large corrugated pipes, and it worked.

Really awful all the way around. Condolences.

Sounds like you might need a sump pump and perimeter drain system. Don't punch hole thru for one yourself right now. You might get a gusher of water coming in at that point.

Oh man, that sucks! Just keep it cool and take care of you wife. We’ll be good boys (well mostly) for a bit longer, won’t we
Do diamonds shine on the dark side of the moon?

Blumlein 88 said:
Really awful all the way around. Condolences.

Sounds like you might need a sump pump and perimeter drain system. Don't punch hole thru for one yourself right now. You might get a gusher of water coming in at that point.
Click to expand...

The region @amirm is in is veryyy veryyy wet with lotsa rain and as the new term describes a atmospheric river comes through fairly often about this time of year. I would not doubt that the water table is above the basement floor.

Terrible sorry to hear that especially about your wife. I am afraid that complete sanation will take a lot time probably including drenage around the hause but I don't really know the situation (nor what's possible to do in given circumstances). I hope rain will stop and you will be able to drain the walls with industrial gas or other blowers in couple of days and do sanitation. I wish your lady a quick recovery and that you soon get trogh this and hopefully one day forget about it.
C

Ouch, good luck with the house and best wishes for your wife's speedy recovery.
A

Sorry to hear about the basement and more sorry to hear about the Mrs. Of the four natural elements that can destroy a property (fire, wind, earthquakes and water) water is by far the worse. If January wasn't such a bad month I would have made a donation. Hope she gets well soon.
Lincoln, NE, USA

Sorry to hear, I was starting to get seriously worried of there was health issues in the background. And it was, sort of. Hope everything gets solved and that your wife recovers soon.

I rememberl the flooding in my hometown Uppsala Sweden during the extreme summer 2018 but at the time I missed it luckily due to my regular summer stay in Brasil. Below the train station. 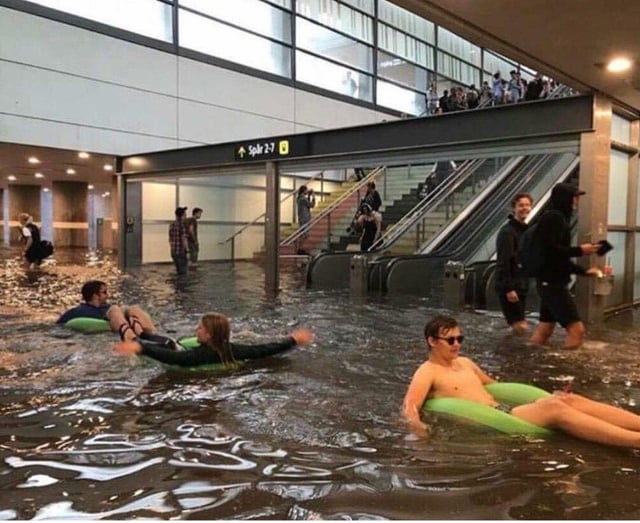 How is climate change affecting you? .. and other natural disasters in your area.

Monoprice - is this a place to complain about service?

S
So few options for amps with preout switches?