The kit we bought, our current setups

The NAD is the king of Amir’s “broken” category but I’m really like Dirac live and typically run “analog bypass” mode when listening to music. Also, the 200 watt Adcom really kicks it up a notch. 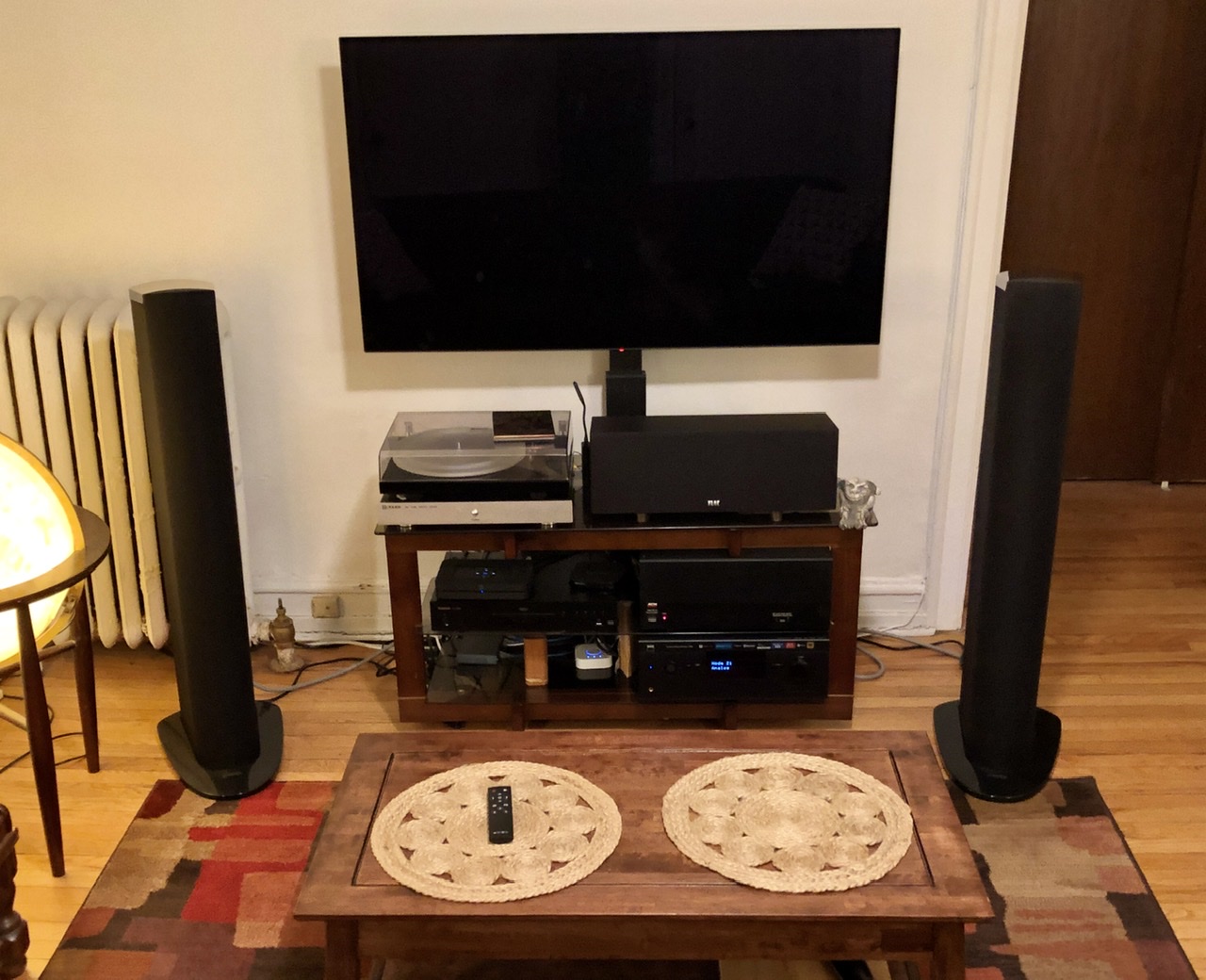 Hi All,
This site has influenced my purchases as of late!!!! 2 CH is great but I also like multichannel for movies. Sorry for the bad pics.

I know they get disparaged some on this site, but I like them a lot (and I got a killer deal). Next up, a couple subwoofers... 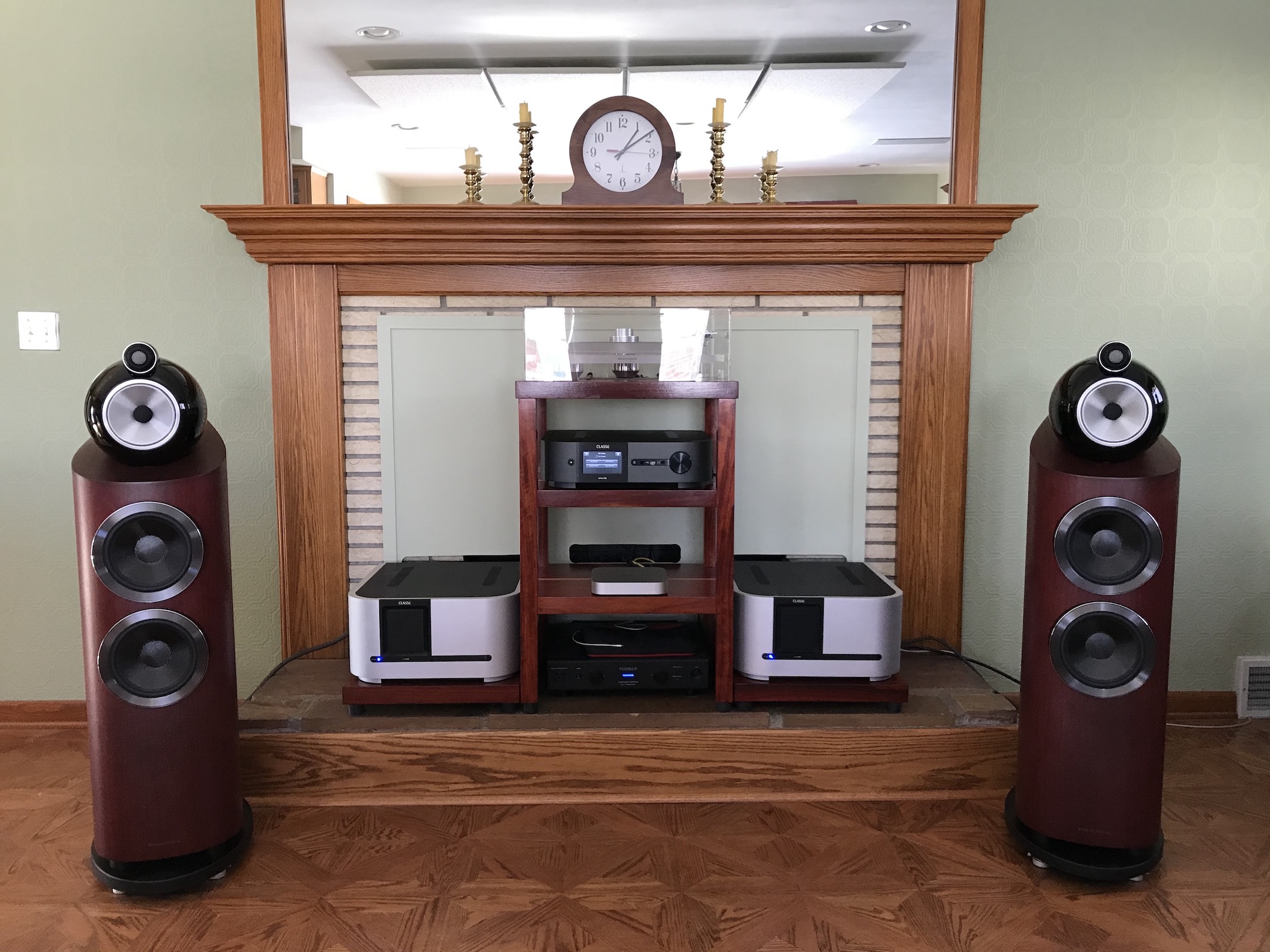 They are undoubtedly the heaviest speakers I've ever owned. 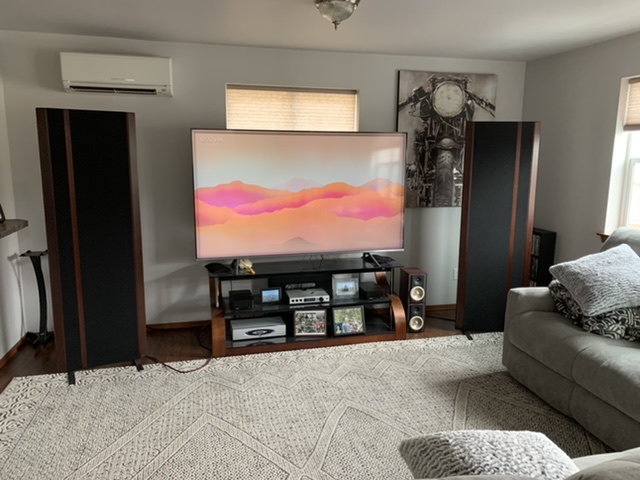 I know they get disparaged some on this site, but I like them a lot (and I got a killer deal). Next up, a couple subwoofers...

They match the aesthetic of the clock nicely.

Rick “whose house would not permit such symmetry” Denney
H

No way for me to even comprehend or imagine how this whole setup sounds (especially after looking up the prices) but this is the comfiest room I've seen in this thread.

Picked up a GoldNote Ph 10 mainly so I can run my two tables, one with an MM cart the other an MC. It's been a little bit of a learning curve as the instructions are somewhat lacking but so far it's excellent with the gain and impedance easily set with one rotating knob which beats fiddling with dip switches. The little Moon phono was great but only took one table at a time so switching out was a chore and totalling harshing my DJ vibe....
R

I said in my previous post that in a fit of boredom, I had purchased both an Arcam CD93 and a Cambridge Audio CXC. I was away for the month of January to handle a family emergency in another state, and wasn't here when the Arcam finally arrived about four weeks after I bought it. I tested it and it must go back--there is a very loud (maybe -20 dBFS) hiss in the audio output and something is obviously amiss in the audio section. The digital output worked fine, but that's not the itch I was scratching with that purchase, so back it goes. But the itch still needed scratching, so I have purchased another CD player of vaunted sound qualities from about that era (early 2000's)--a Naim CD5. It should arrive next week.

No, I do not expect the Naim to sound particularly different than my current player, a Tascam CD-401, which I already can't distinguish from the Cambridge CXC feeding a Musical Fidelity DAC. But it uses a Philips transport that is more robust than the Sanyo transport in the Cambridge, and (a bit) more serviceable than the otherwise lovely Sony KSS151 in the older Tascam. And Naim reportedly kept a stock of parts, though I bet that doesn't last forever. But it lacks the usual fragile drawer--no plastic gears to crack and no belts to turn to goo. The drawerless Philips transport usually means a top-loader, but Naim mounted it to a rotating tray that rolls laterally out the front using human power, bringing the whole transport with it, and clamps the CD using a manually placed magnetic puck. Drawers have been the weak links in my CD player history, but a top-loader doesn't work in my setup. 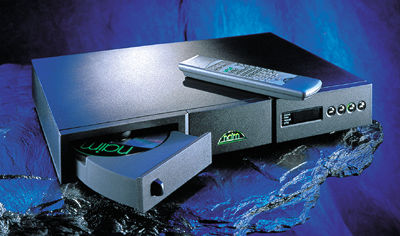 No, I'm not going to buy the "upgrade" power supply. Nor am I going to buy a Naim interconnect--I found an inexpensive but still well-shielded DIN to RCA adaptor on Amazon, and I'll make the link plug that allows the use of the internal power supply. The seller wrote in the listing that it can only be used with a Naim preamp and power supply. Uh, yeah.

If I am astounded by this or that when it arrives, I will seek to find out why in measurable terms. I suspect the CXC will be the more transparent, feeding into a Topping E30 as it will be once I unbox and install the latter. Even though I don't expect one to be better or worse than the other (or even different), I'm sort-of hoping that it is just to have something to talk about.

I really don't mind having two CD players in one system.

(The seller, in the discussion about the Arcam's fault and needed return, didn't take my word for it completely when I told him I tested it several times, alternating between the Arcam and my Tascam, using the same interconnects moved back and forth. He asked me to bypass the preamp and plug it straight into my amp, because preamps are "only needed for phonos". My amps, of course, have no volume controls. I told him conducting that test would ruin my speakers, my ears, possibly my amps, and certainly my domestic harmony, and not necessarily in that order. He relented.)

Near-field covid set-up of C-notes and an amp board in a repurposed box. Surprise, I think my wife is planning on taking it over when things get normal-ish because she likes the sound and is a remote worker.

Current rig is in my sig. WAV CD rips or Spotify (gasp!) to my ADI-2 Pro FS, which goes out via XLR to my Barefoot Footprint 01s in nearfield. Headphones, at home it's Sennheiser HD6XXs, on the go it's IE40 Pros. I have a pair of ATH-M50s, but I never use them. Mic preamps are ART TransX, which are honestly way better than they have any business being for $500 for 2 preamps. Clean they are not, but the character they have is pleasing on every source I've tried them on.

Past stuff I've had:

Speakers:
- Equator Audio D5 (rather dark, but stereo imaging was immaculate and the sweet spot was as wide as could be)
- Dayton BR-1 kit (still have these, they're in my living room, not bad for what they are and very easy to build)
- Focal Alpha 65 (solid if unremarkable; I like these better than the HS8s they compete with)
- Adam S3A (Words cannot describe how much I viscerally hated these. Nothing translated right off them. Also, the quoted F3 of 25Hz is total BS - no way did they get that low)
- Focal Shape 65 (Overall good, but F3 of 40hz seems like a total lie considering the F3 of my FP01s is 36 hz and they seem to end up much, much lower)


Audio interfaces/DACs
- Lexicon Alpha (this was such a long time ago, I don't remember anything about it other than its ASIO driver barely worked)
- Focusrite Saffire 6 USB (This was such a step up from the Lexicon just because it actually worked properly...)
- Focusrite Saffire Pro 40 (Surprisingly, this was much better than the Saffire 6. I think the mains powered Focusrite prosumer stuff runs at higher internal voltages than bus powered, because it was way less prone to clipping on the inputs.)
- Universal Audio Apollo Twin Duo (1st gen silverface, Thunderbolt) (now this? This was a big step up. Shame about its total incompatibility with Windows at the time, which is why I ended up selling it)
- Audient iD22 (other than the kind of janky driver situation, this was pretty solid - I liked the integrated monitor controller features a lot and the actual straight-to-converter line inputs were always appreciated. Preamps were pretty good too...)
- Schiit Modius (I bought this as a temporary piece while I was waiting for my ADI-2 to show up. Sounded fine, but the total lack of volume control was annoying as hell.)

Amps:
- Crown XLS1000 (When I was using the BR-1s as monitors, this was my amp. I sold it to a bassist who needed a power amp for his rack rig... he plays in Intervals, if any of you are curious).
Last edited: Feb 6, 2021
Active Speakers>Passive Speakers
Dome Mids>>>>>All Others

Not enought room for a sub.

The room where I work out at (cyling - Zwift):

Living room (no speakers, I only listen with headphones at night, when I'm reading):

I also own a Synology NAS.

Good enough for me

While I have a ton of beautiful vintage gear, most of it sits in storage (need to sell it all). Now I almost always listen via: 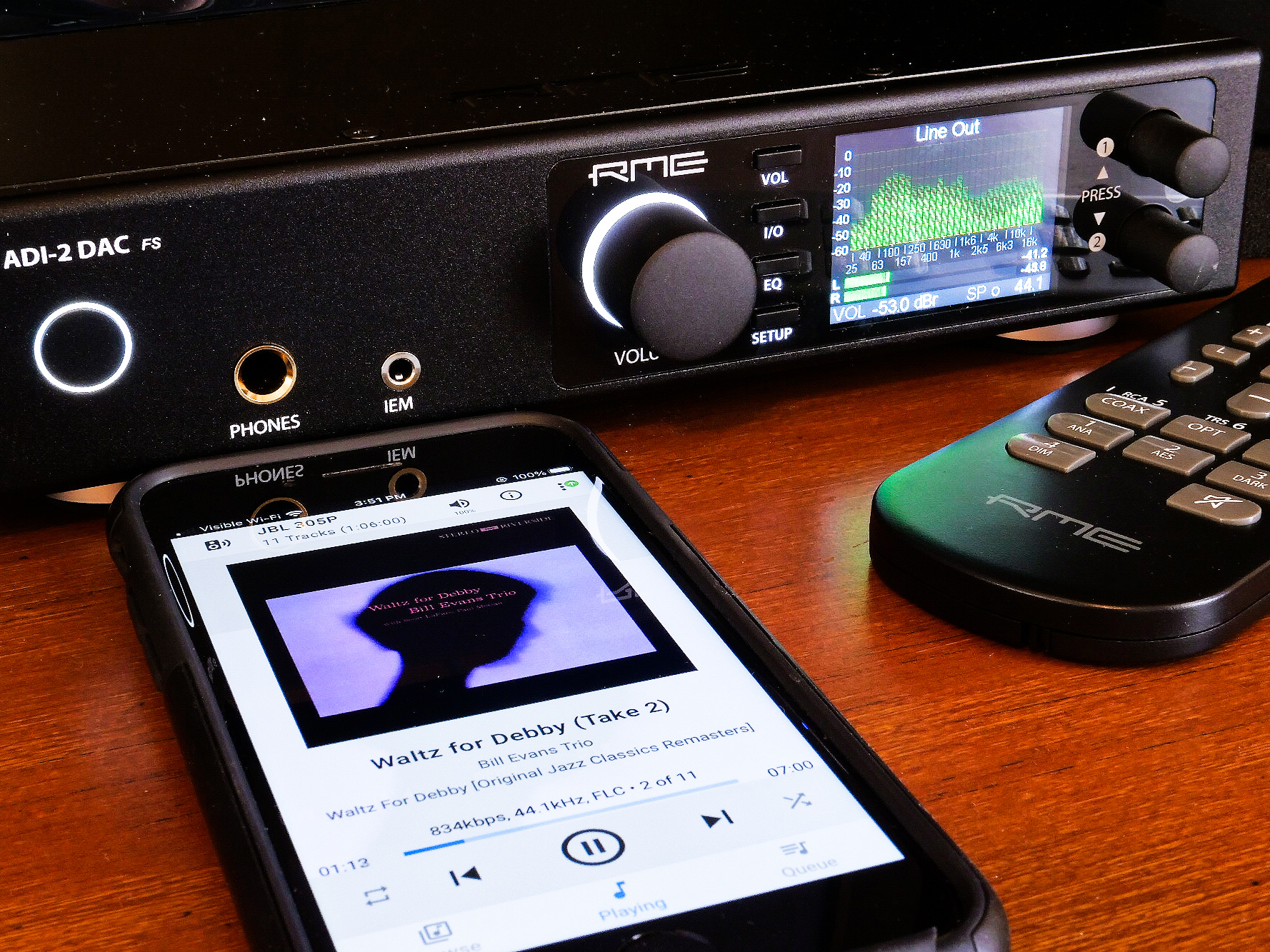 Someone brought up their recording stuff, so I’ll mention mine.

The Presonus has quite decent microphone preamps with a little more gain and much more portability than my Benchmark ADC, and the loopback test I did with REW showed it to be more than sufficiently transparent. It also will mix microphones and computer-based backing tracks into headphones with good adjustability. The headphones are Koss Pro4S, but I did order an AKG K371 this week, based on Amir’s review.

I use the Presonus for REW room measurements, too. It has line-level “main” outputs that I can feed into a currently unused input on my Adcom preamp.

I am very happy with them, power is not a problem I have anymore!
Sound is subjective, day, time, mood.
D

Enjoy any constructive feedback is appreciated!

Updated, now with heights added. Same small room so pretty packed but what the heck... 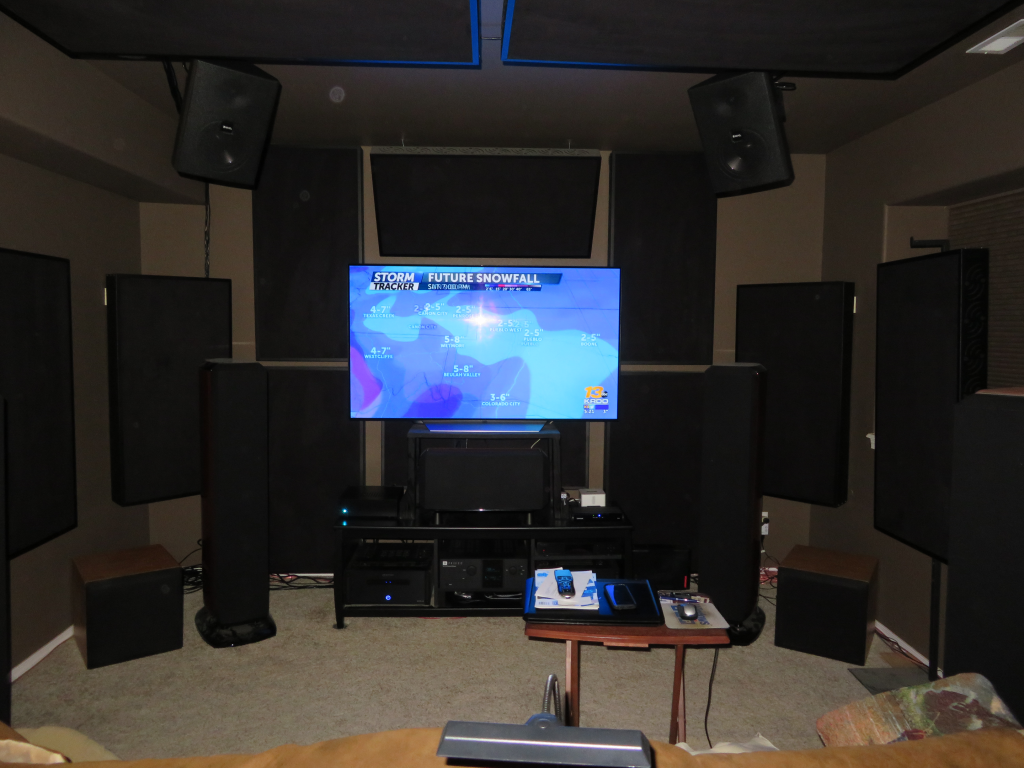 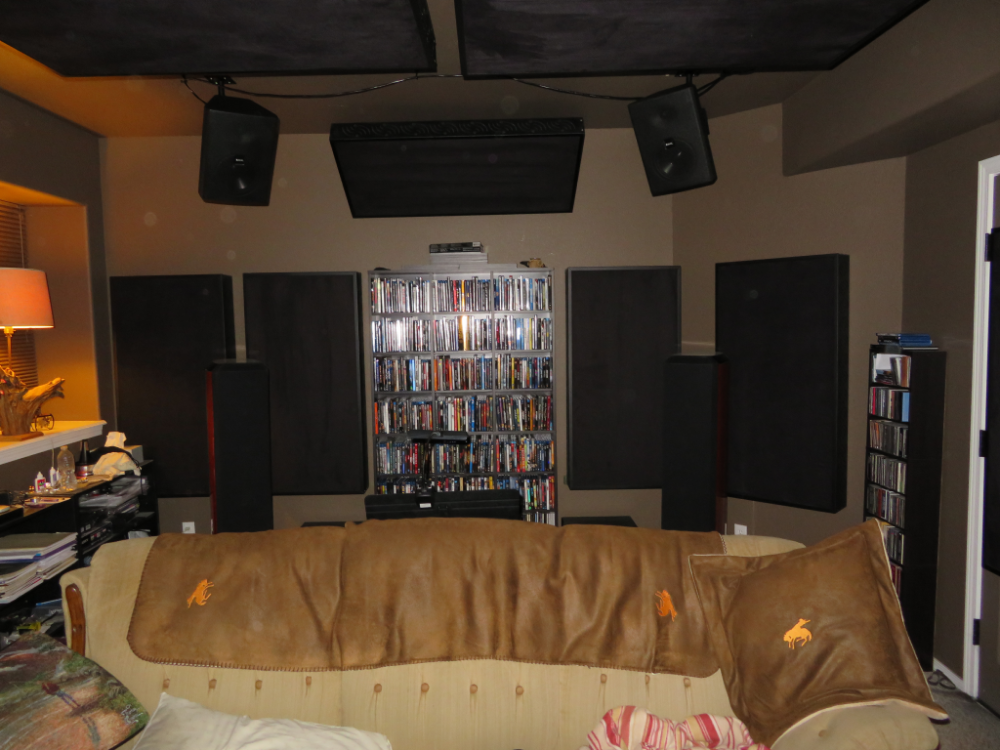 Enjoy any constructive feedback is appreciated!
Click to expand...

How do i get invited to your house ?
You must log in or register to reply here.

Show us your Raspberry PIs, Intel NUCs and other mini PCs!
2 3