This is a review and detailed measurements of the Neumann 3-way, active speaker (monitor). It is on loan from the company and costs US $5,195. 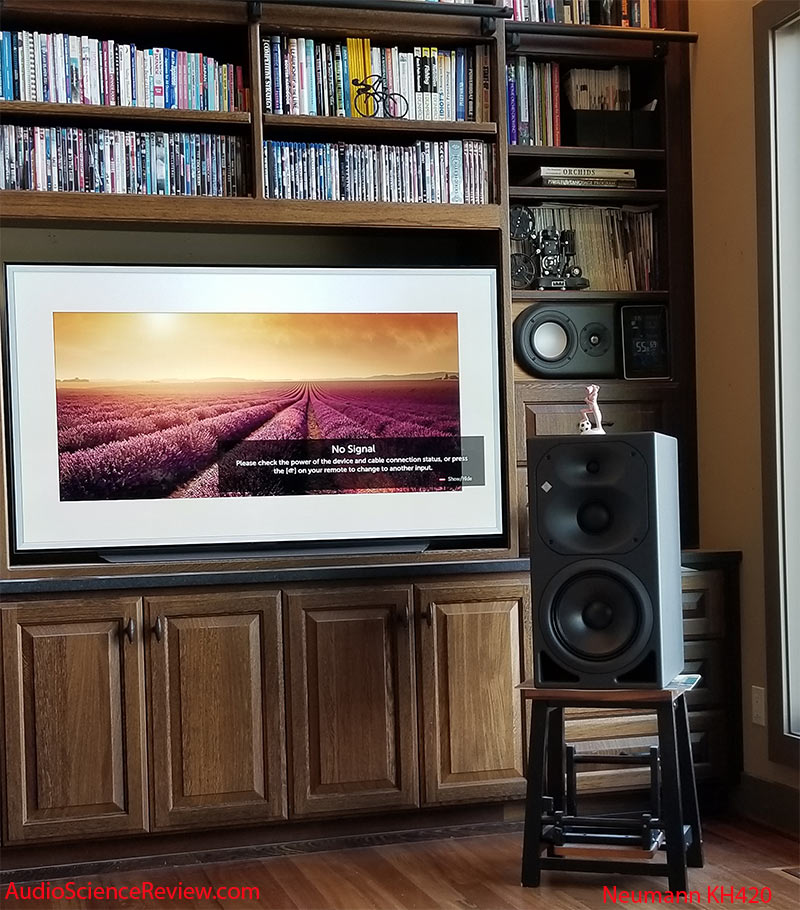 Speaker was too heavy to lug to the loft where my main system is so you have to put up with the cell phone picture above and listening tests there. Back panel shows extensive controls although this is not a DSP speaker: 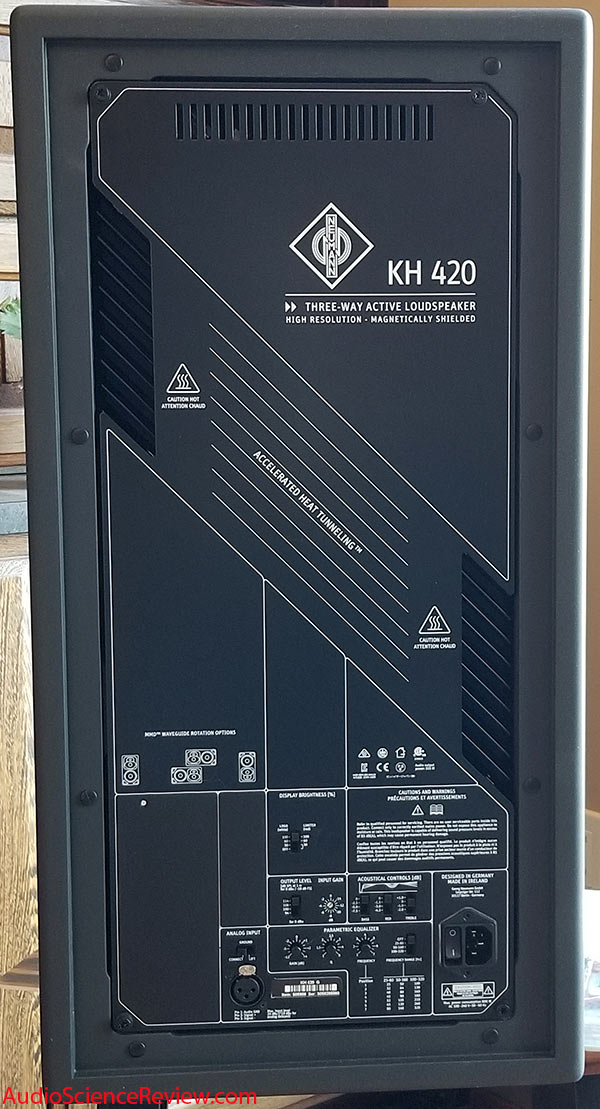 I must say, I like the styling of the back panel! I imagine it is visible in some studio settings so might as well give it some class as you see here.

Reference axis was documented to be half-way between the centers of the tweeter and midrange. I eyeballed it as being just below the bottom edge of the tweeter waveguide. Measurement temperature was about 61 degrees F (16 degrees C).

Neumann KH420 Measurements
Acoustic measurements can be grouped in a way that can be perceptually analyzed to determine how good a speaker is and how it can be used in a room. This so called spinorama shows us just about everything we need to know about the speaker with respect to tonality and some flaws: 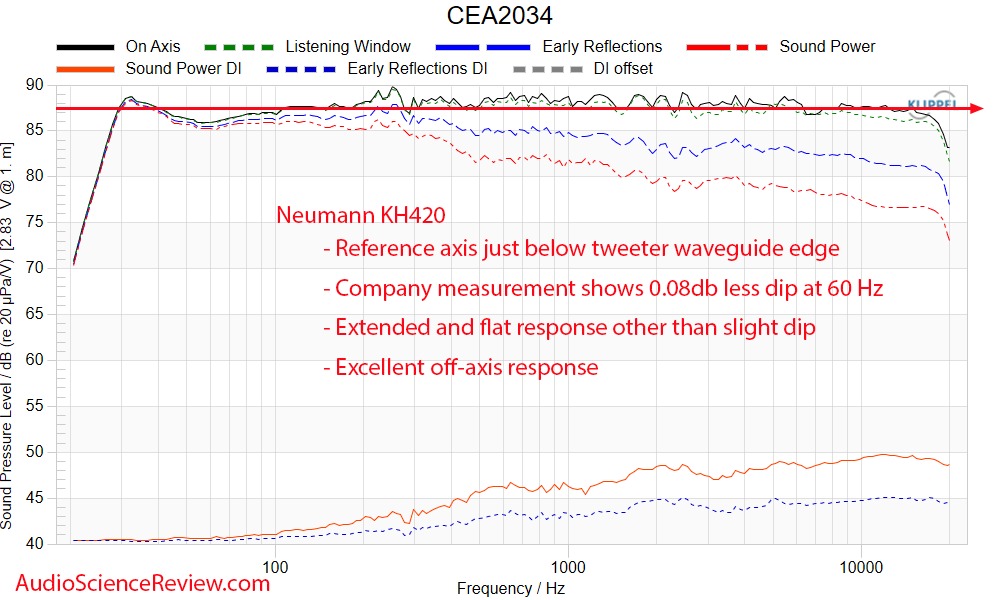 You expect the company to deliver, and deliver it does! Other than a minor dip around 50 to 60 Hz, frequency response is flat and extends to both ends of audible spectrum. We exchanged measurements and company's on-axis response has a smaller dip to the tune of 0.8 dB. This has been a continuing theme with Neumann speaker bass response. Either they are wrong a bit here, or Klippel NFS is. No way to adjudicate. Doesn't matter anyway as your room will wildly modify that region so what the speaker outputs is pretty secondary other than amount of SPL it produces.

Using our far field model, this is our early reflections: 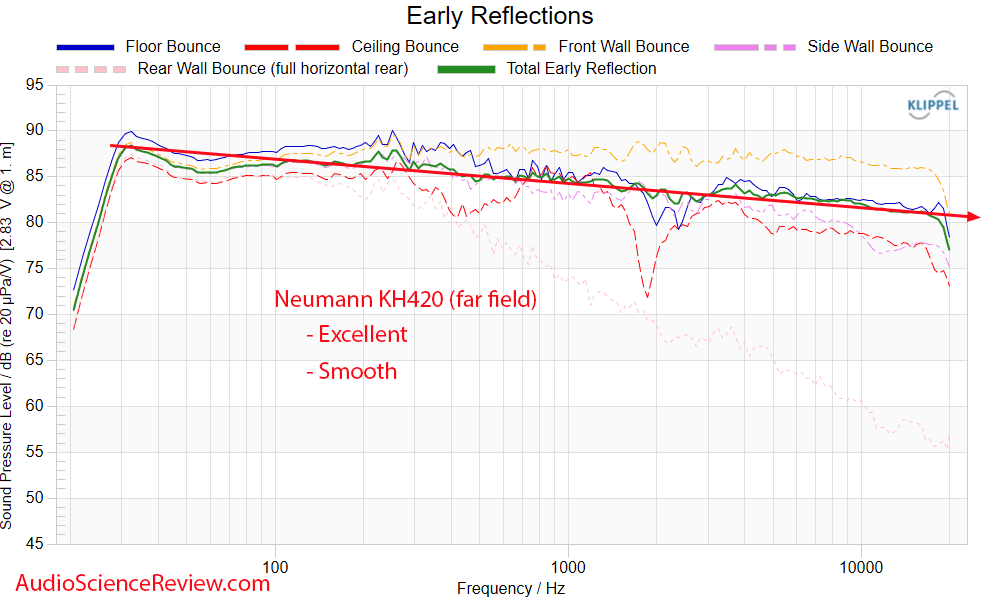 It nicely sums to a smooth line indicating off-axis response is very similar to on-axis albeit, with desired falling off of the high frequencies. As a result predicted in-room response looks just as we want to see it: 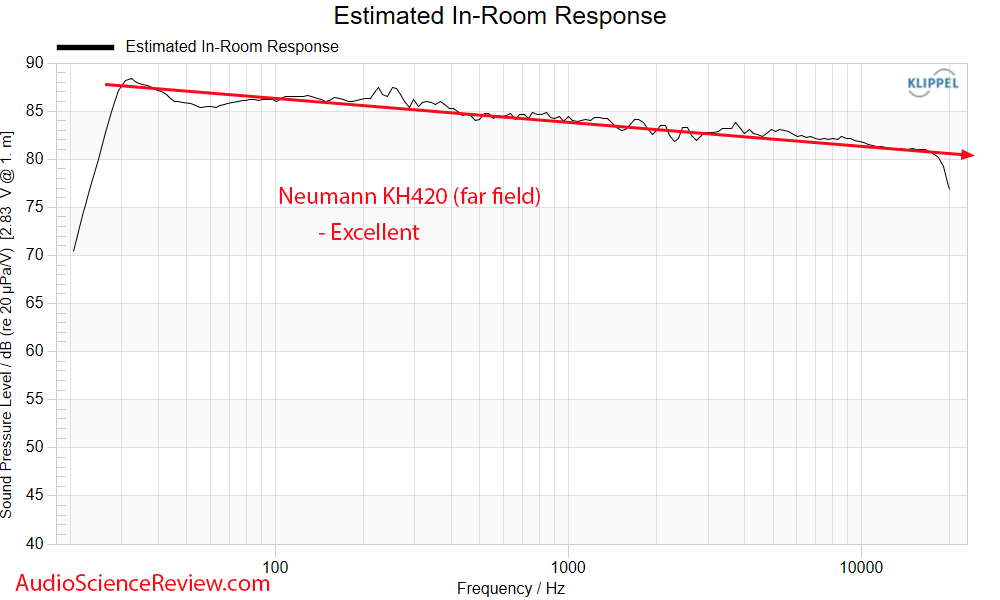 As indicated, horizontal beam width and directivity are highly controlled: 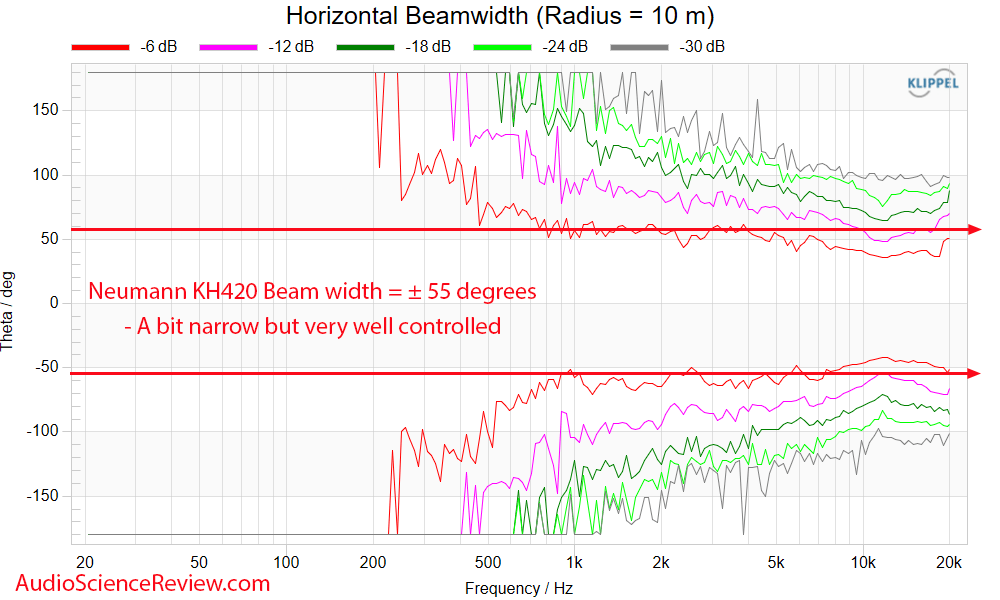 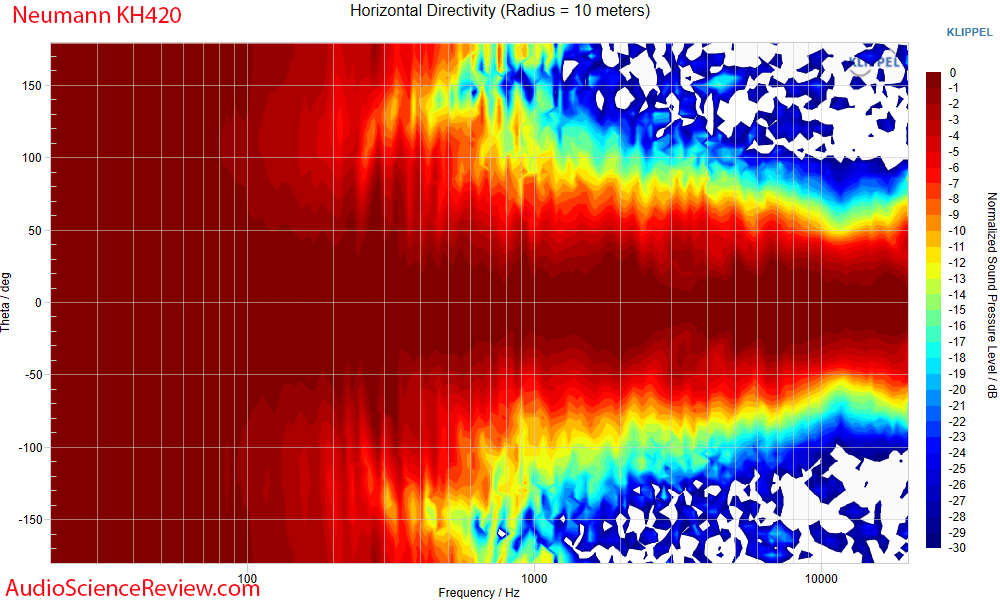 Vertically response is not as perfect but the midrange helps it to be better than a 2-way: 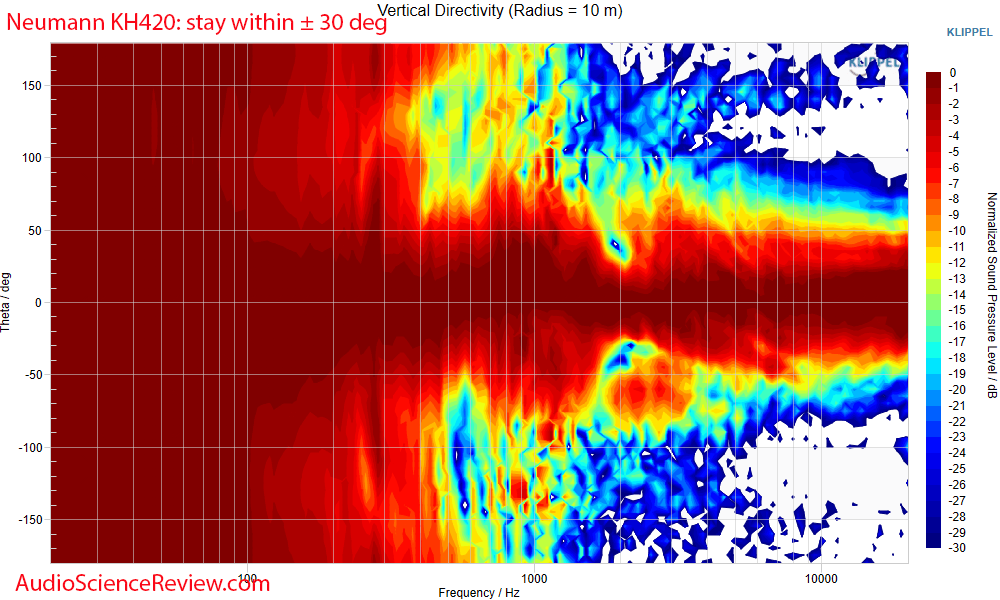 I suspect you buy this model to get high output power and that is precisely what you get:

I had to hold on for dear life as I sat some 7 feet away from the speaker despite having hearing protection! Strong breeze followed after the sweep finished courtesy of the front firing ports! Clipping indicator did turn red and as you see, the tweeter amplifier is limited to either protect it, the driver, or both. Fortunately your music rarely has such high level of energy at high frequencies so actual impact of that is very small to nil.

For some reason I forgot to run the waterfall test but here is the impulse and step responses: 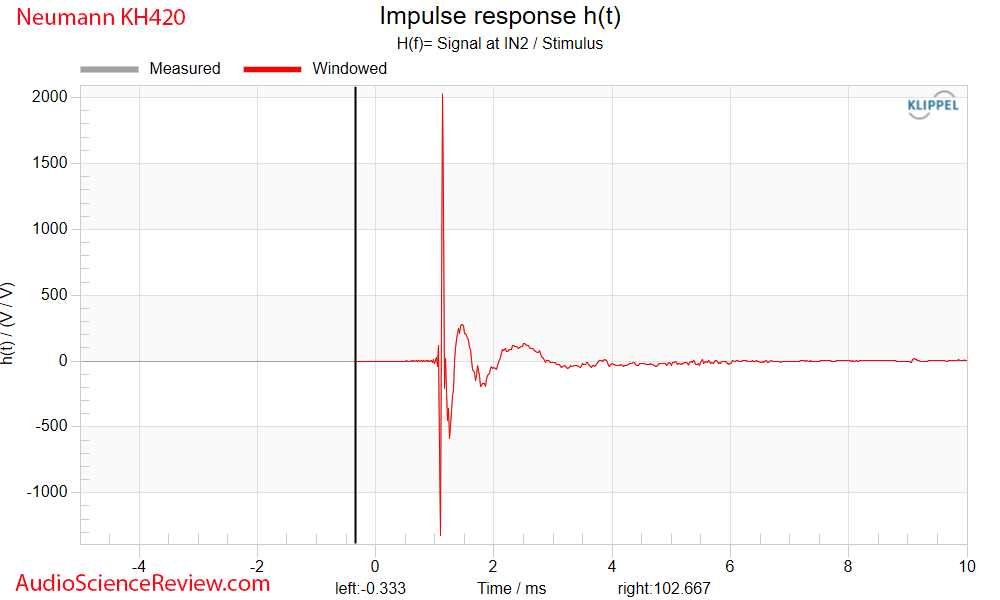 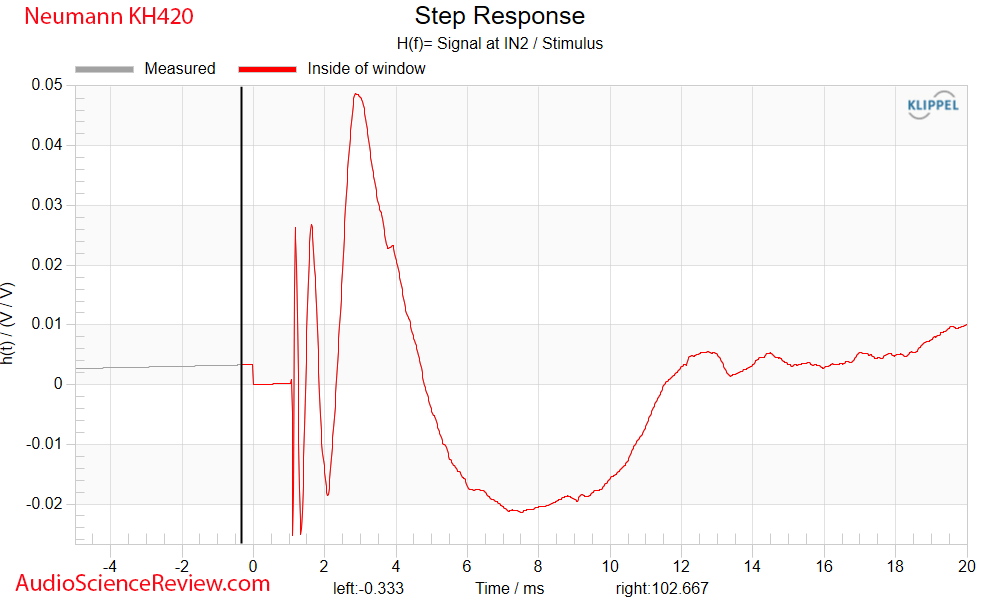 Neumann KH 420 G Listening Tests
Review picture shows the listening spot (although I did rotate the speaker some for the picture). The room has nearly 30 foot high ceiling and is a massive open space. It is also on the reflective side.

The performance of the KH 420 was superb. The bass at times was quite scary and it causes resonance in the entire house. You felt like you were in a vibration chamber with tracks that extended down to 20 Hz and lower. Mind you, I could get the driver to bottom out, crackle and clipping light to come on. But by then I was a heck of a lot more scared than the speaker was!

The midrange driver was the top star here bringing clarity and dynamics to female vocals that gave you goosebumps. Then the tweeter would chime in with superb resolution of its own. Add the bass response per above and the picture was compete.

I put my ear next to the tweeter with music paused and I could not hear anything over ambient noise level.

Conclusions
We have grown to expect excellence from Neumann but not power capability. The KH420 nicely remedies that producing a speaker that you could buy and forget about upgrading ever again. Every bit of the system oozes excellence in engineering which comes across both looking at it and hearing it. It also has an advantage over some other studio monitors in that it looks more like a "normal" speaker.

It is my pleasure to add the Neumann KH420 to my recommended list. Will be sad to see it leave.....

Thanks, been waiting for this one!

At last! This has been pending for how long? 6 months?

Kudos for your work, Amir ! Astonishing speaker, as expected.

It is not even that expensive considering the performance. Impressive.
Ohne Musik wäre das Leben ein Irrtum.
OP

I meant to note that there is absolutely no need for a sub unless you want to play extremely, extremely loud!
Amir
Founder, Audio Science Review
Founder, Madrona Digital
Contributing Editor, Widescreen Review Magazine
Click for My Technical Background
My YouTube Channel
OP

digitalfrost said:
It is not even that expensive considering the performance. Impressive.
Click to expand...

Yeh, it is a joy to setup a system. I just grabbed a Topping DX5, ran XLR cable to it and I was in business! The DX5 has volume control so I was all set.
Amir
Founder, Audio Science Review
Founder, Madrona Digital
Contributing Editor, Widescreen Review Magazine
Click for My Technical Background
My YouTube Channel 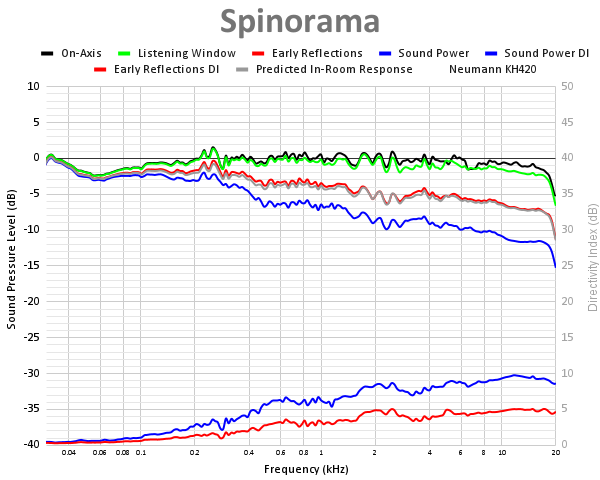 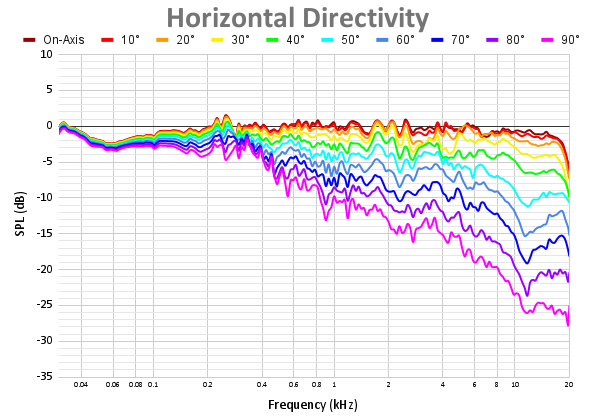 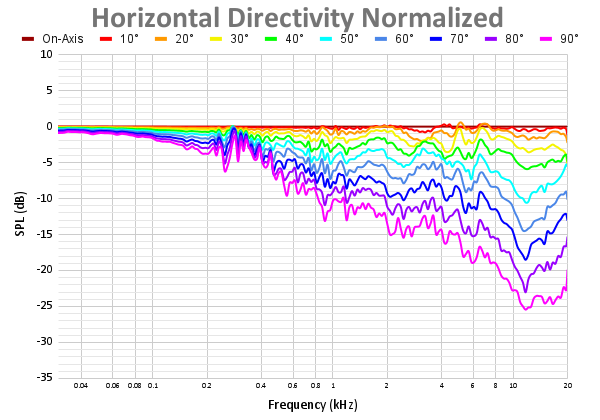 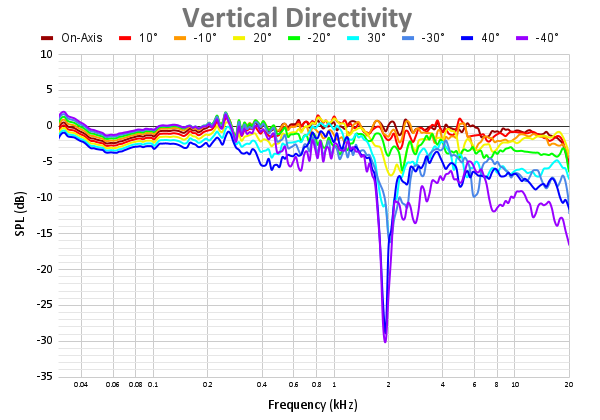 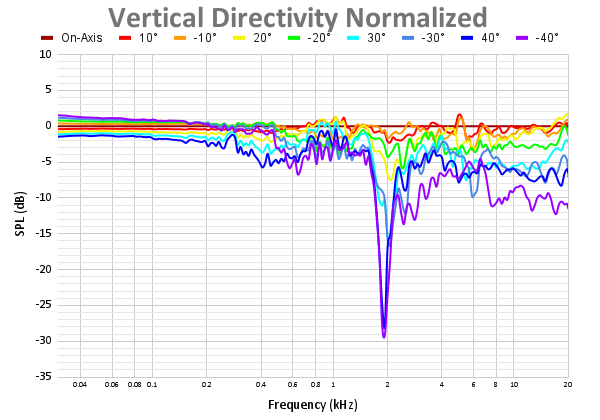 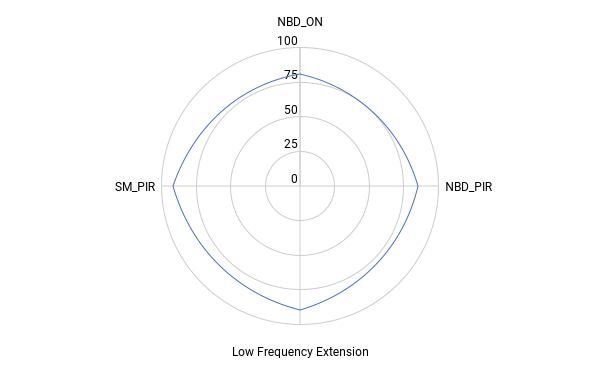 Jim Shaw said:
Remarkable. I put this under the category of 'See, it can be done.' Is the $5.2k price for one or two of these gems?
Click to expand...

That 10" would explain why!

Now THAT is a speaker.

DjBonoBobo said:
What was your subjective impression/feelings compared to the Genelec 8361A?
Click to expand...

Finally!
that low frequency dip looks a little curious though...