This is a review and detailed measurements of the Auralic Vega G2 Network Streamer and DAC. It is on kind loan from a member. The Vega G2 costs US $6,599. The owner supplied an external clock for it which I will review separately.

The Vega G2 is exceptionally heavy for streamer/DAC:

I did not however care for the super sharp edges and corners.

The display is large, high resolution and attractive. It nicely shows the volume level, sample rate and filter settings. The general user interface is OK. I managed to get through it.

The back panel shows a lot of connections as it should in this price category:

Boot up time was high when network connection was live but this is typical of other streamers.

I initially tested the unit using stock Windows 10 driver and ASIO4ALL wrapper. Alas, in this mode there were data transfer issues so I downloaded their drivers which had a nice, working ASIO interface.

The volume control is stepped attenuators which means as you turn the volume, the output mutes a bit. Kind of annoying but not as bad as some other implementations.

Streamer and DAC Audio Measurements
As usual we start with our dashboard using USB input and XLR Out: 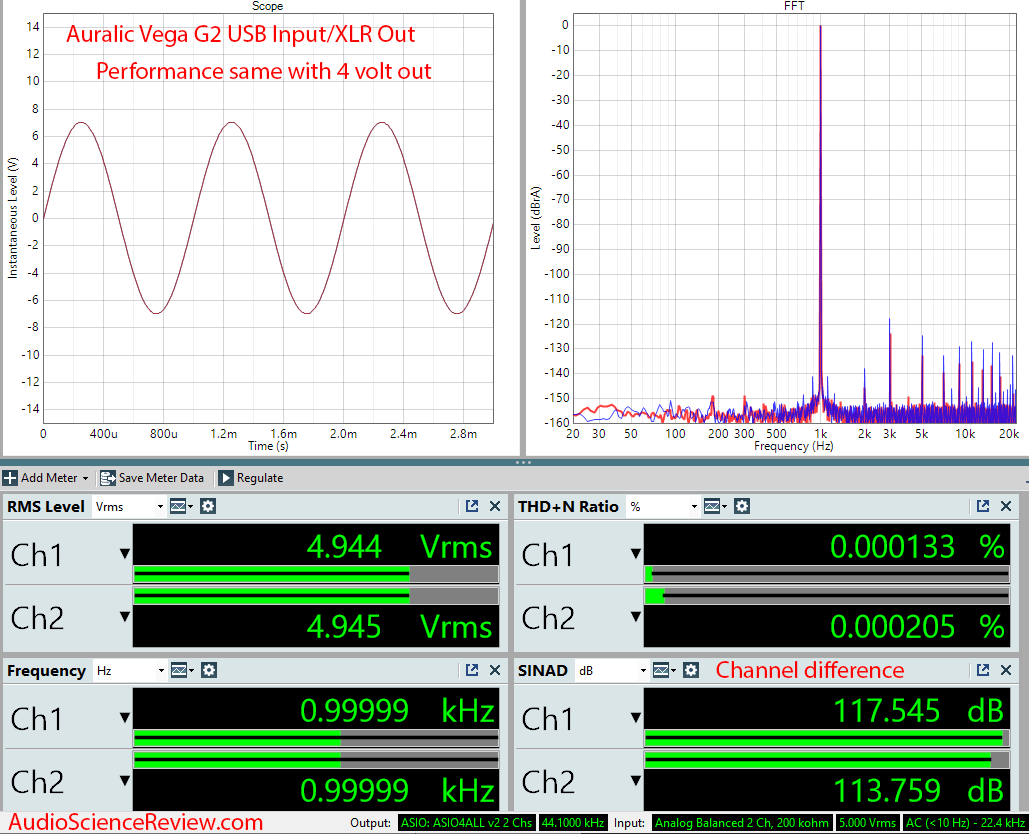 The output was a bit high which is fine. I tried lowering it but it did not change performance so I left it as is.

The big news here is the weak channel (ch 2) which has higher distortion than the other. In this price category, I expect perfection. What is the point of paying this much and getting luck of the draw as far as performance of one channel versus the other? Averaging the two knocks the SINAD down, placing the Vega G2 too low for its category:

Dynamic range was in the same realm, being very good but not as perfect as it could be: 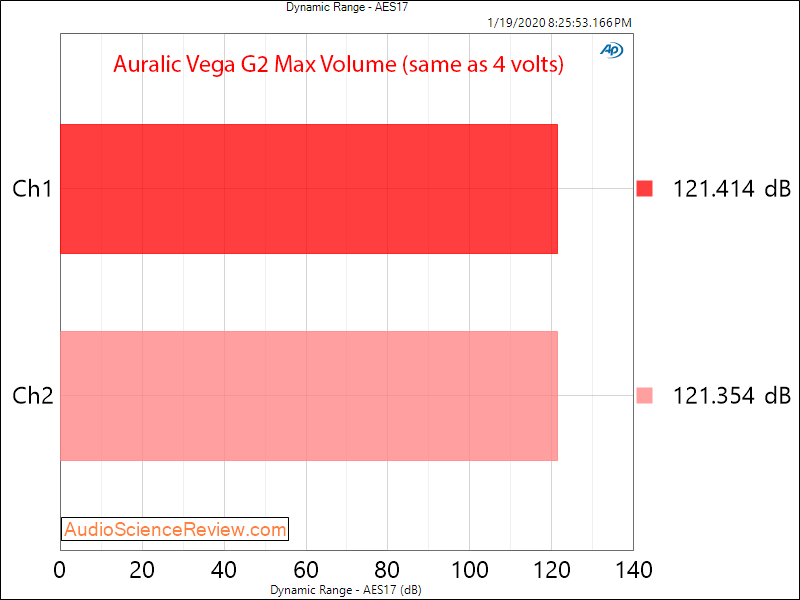 We are 3 to 4 dB shy of perfection here.

IMD distortion and noise relative to level is very good: 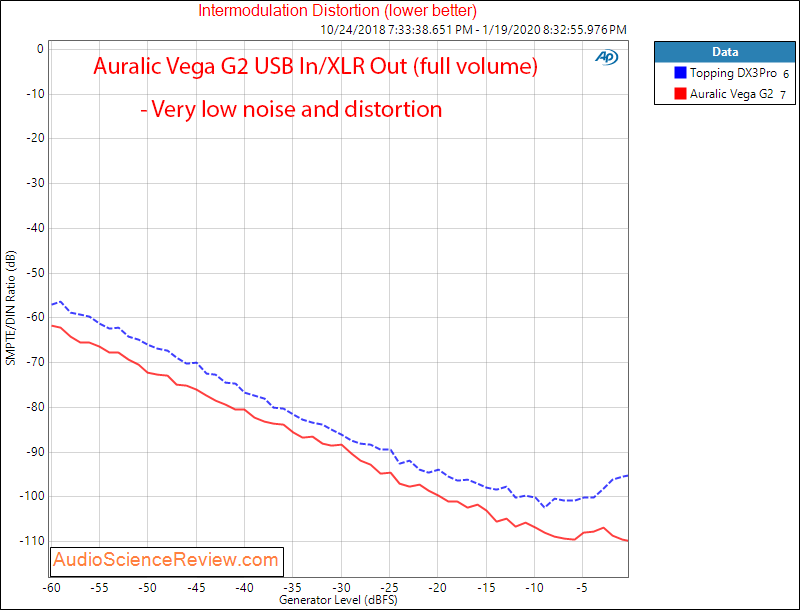 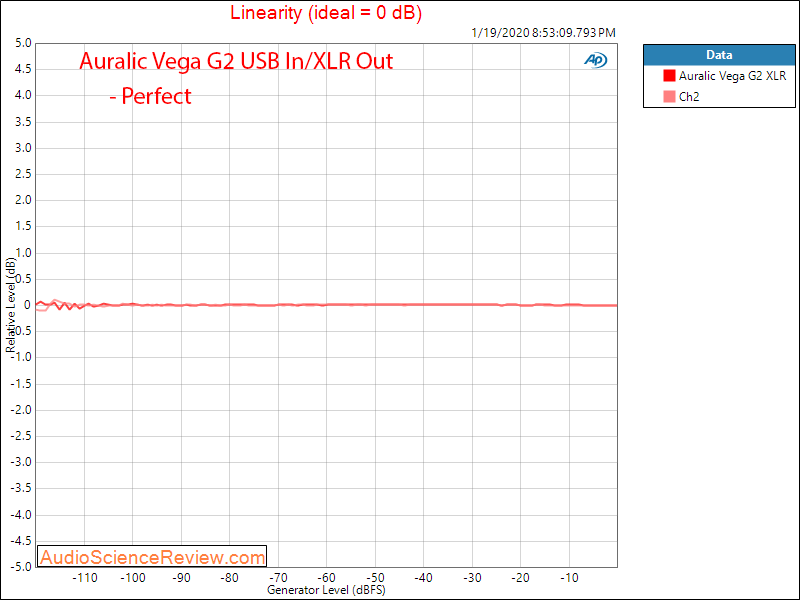 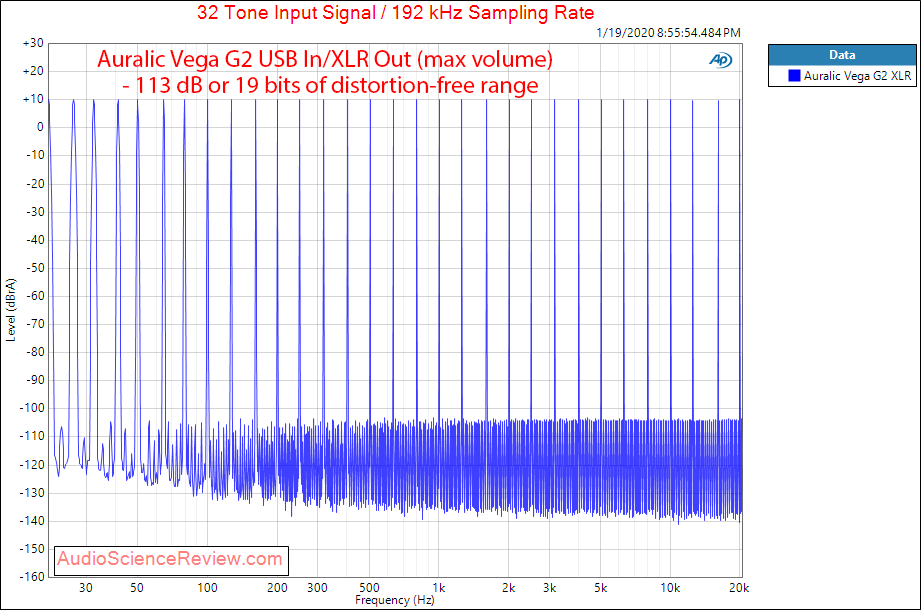 THD+N versus frequency is very flat and hence good: 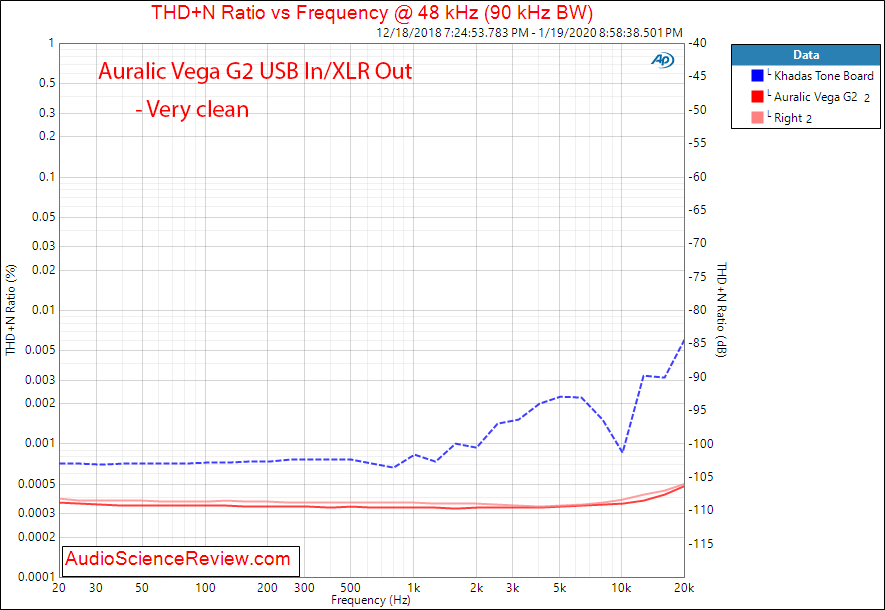 Part of the reason for this is the default filter which has a very sharp and strong filter to get rid of ultrasonics: 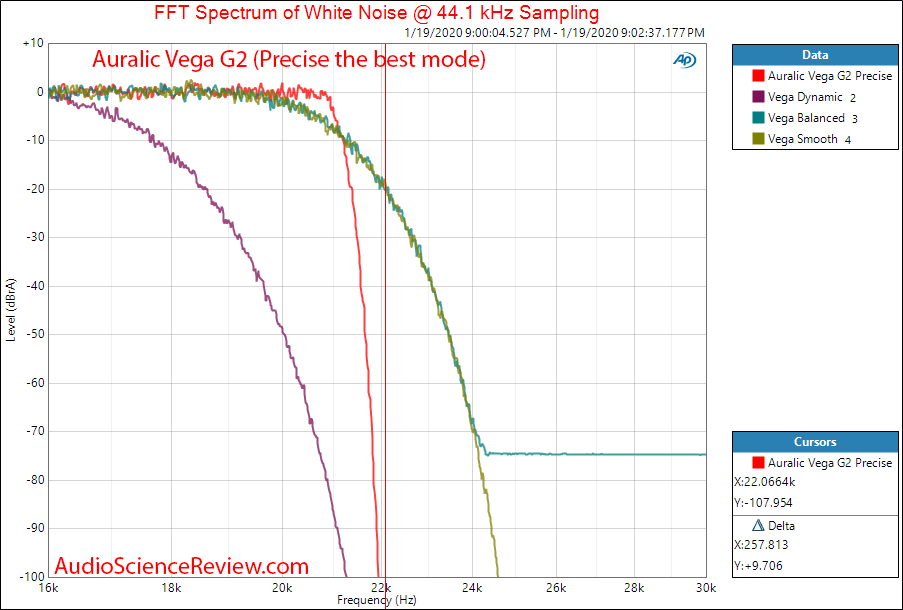 Suggest not using "Dynamic" given how much bandwidth you lose. Precise is the one I would use. 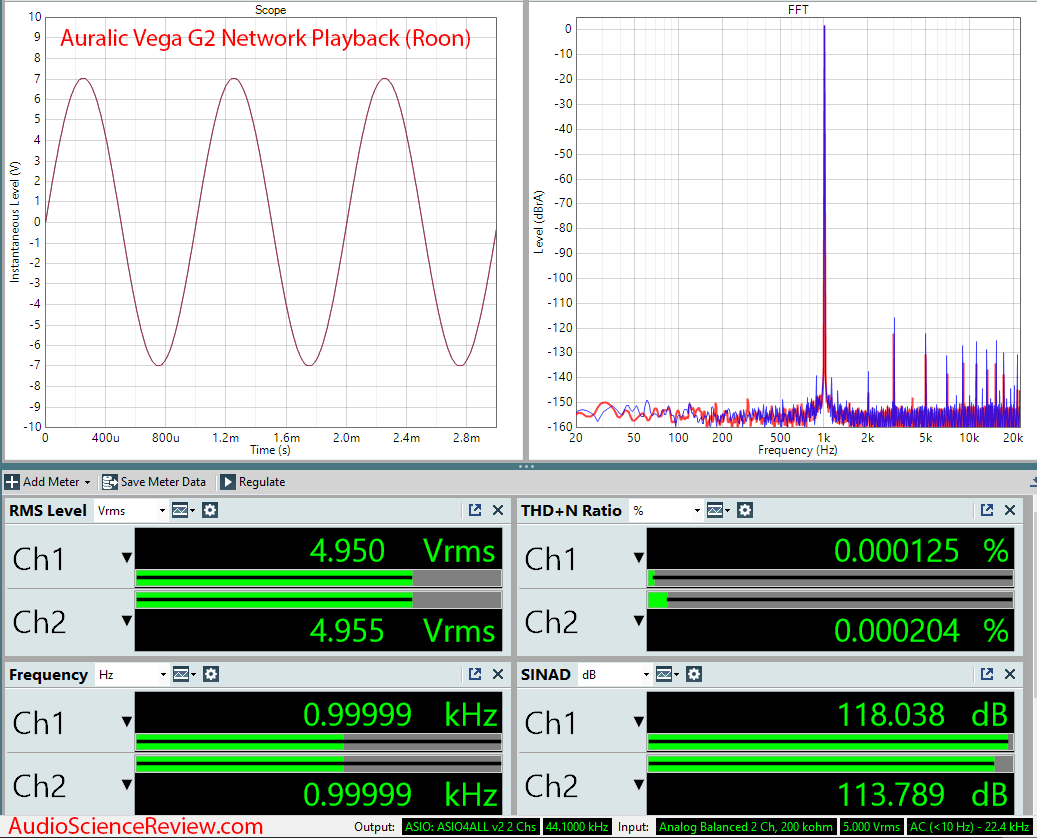 Thermal Stability
Performance did not change at all as I ran it initially: 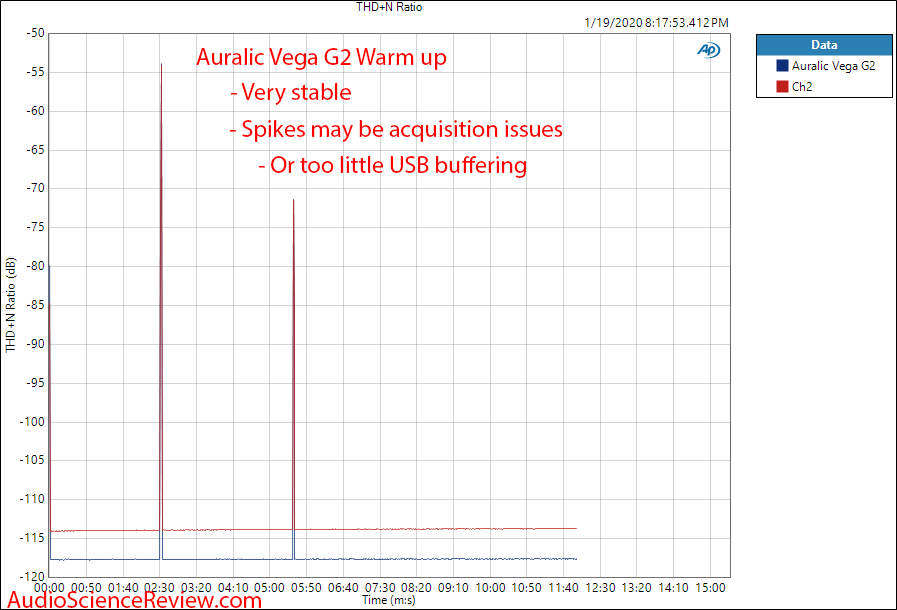 The spikes as I mentioned before were due to asio interface I was using so ignore those.

I would only turn the unit on when using it rather than leaving it on given this performance.

Listening Tests
I listened to a few of my reference tracks and they sounded as excellent as ever. No magic is there for the premium but of course, nothing wrong whatsoever either.

Conclusions
The Auralic Vega G2 produces excellent results with no design flaw. There is a bit lack of precision though in one channel being good bit worse than the other in distortion department, and measurements NOT topping our score charts. I don't mind paying a lot of money but then I want to brag about perfection. There is a streaming competitor in those charts that is at the top and much cheaper as well with beautiful build quality.

So overall the Auralic Vega G2 is fine but can't get my recommendation due to its performance relative to its cost.

My reviews are outpacing my ability to come up with lame jokes so this one has to go with the plain plead for more donation using: https://www.audiosciencereview.com/forum/index.php?threads/how-to-support-audio-science-review.8150/
Amir
Founder, Audio Science Review
Founder, Madrona Digital
Contributing Editor, Widescreen Review Magazine
Click for My Technical Background
My YouTube Channel

amirm said:
IMD distortion and noise relative to level is very good:
Click to expand...
This apparently uses a modified ESS Sabre chip. I don’t know what that fully means but there is no IMD hump, which is interesting (and good).

amirm said:
First what?
Click to expand...
Clash of generations...

The performance seems more than fair to me, considering the lot of buzzwords used for promoting it. Sadly, the channel mismatch is barely acceptable at this price. Also, the 5V output will give it an audible advantage in AB sighted listening. And I suppose it was designed for this purpose.

I would be glad to know how the early boutique DAC from Auralic performed at the time.
Anti-BS Crusader

So now we need some review of "common folks" desktop player too, how about Aune X5s or S5..? (not meant as direct competitor of course) 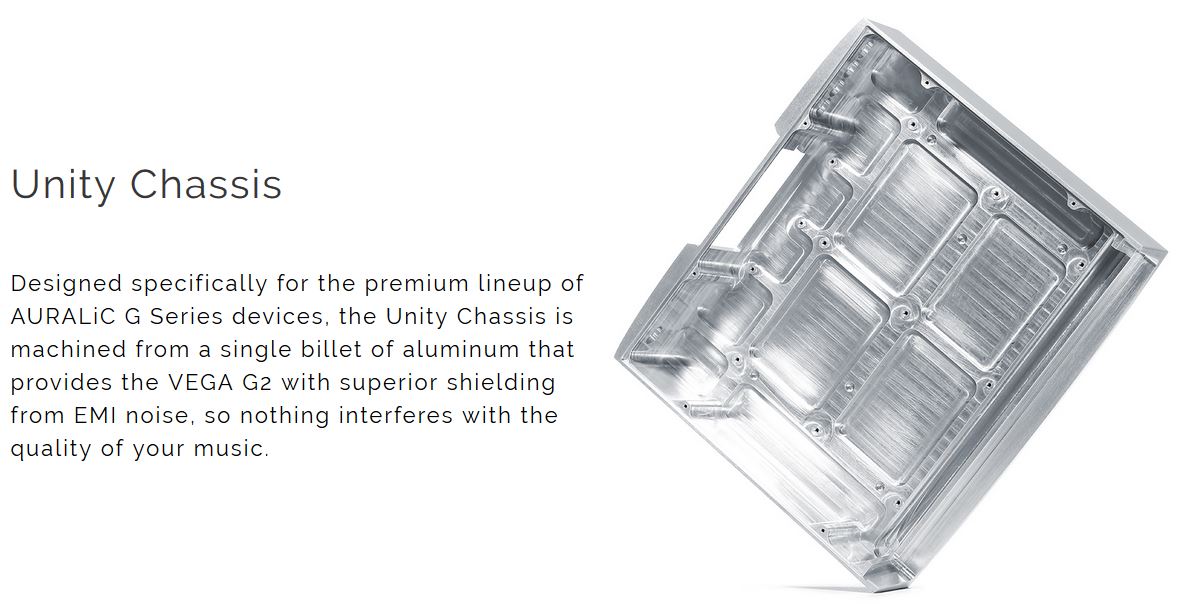 Always wonder if such overkills are really needed..
Y

A bit disappointed by the channel difference especially at this price and their stellar performance of the original Vega!
I still loved my Taurus Mk II amp so much despite the pot gets a bit scratchy in feel but not operation and that brings my love to this brand.

Any trial for the other input options like Toslink to check was it really the circuit or the chip is at fault? As this is a DS dac I don't expect for miracles like WolfX's holo spring 2 balanced itself out after some running in and improves the bad channel
L

Thanks for the review! I was waiting for this....however....I have ordered Element X due to I cannot resist the itchy...
Looks like the competition in AIO solution was heated up. Btw: the little brother of it, Auralic Vega G1, was running a steep promotion on Taobao China website now. USD 2900 with free Asus router. Maybe it is a good idea to get a copy for testing.

It is confirmed - once again, big money does not necessarily buy top of the line performance ...
Except for my customers when they buy my machinery!

Seems like you've had a run of products with dodgy 2nd channels.

Out of genuine curiosity (rather than insinuation of any kind), do you ever run checks of the test rig with a known sample to make sure it's not acting up?

JohnYang1997 said:
First
Click to expand...
It's all down hill for you from here.
independence, we do it together..
https://www.patreon.com/audiosciencereview

I purchased the Auralic Aries G1 (almost 3k with tax) and it would not connect to my wireless network. After the fact I was advised it connects to only a small number of routers. Apparently that warning is on their web site but it's obscure (to me, then again everything is getting obscure lol). Anyway, not impressed with Auralic, waiting for Element X to get native Spotify, Qobuz, etc. I believe it only has Tidal native at this time.

Only because wrapping it in aluminum foil wouldn't be as sexy...

I'm pretty sure the opening on the front for the display negates the point of such superfluous *engineering*.

Always wonder if such overkills are really needed..
Click to expand...
C

Bombadil said:
I purchased the Auralic Aries G1 (almost 3k with tax) and it would not connect to my wireless network. After the fact I was advised it connects to only a small number of routers. Apparently that warning is on their web site but it's obscure (to me, then again everything is getting obscure lol). Anyway, not impressed with Auralic, waiting for Element X to get native Spotify, Qobuz, etc. I believe it only has Tidal native at this time.
Click to expand...
Waiting for Qobuz. Waiting for an iPad app. Waiting for Roon Certification (Element i at least). Matrix needs to hire some programmers. Off topic, sorry.

CharlesC said:
Waiting for Qobuz. Waiting for an iPad app. Waiting for Roon Certification (Element i at least). Matrix needs to hire some programmers. Off topic, sorry.
Click to expand...
iPad app was just released 2 days ago. https://www.matrix-digi.com/en/news/20200118473.html
Roon works already, without certification yet, so what is the problem?
Qobuz is lacking indeed.
Last edited: Jan 20, 2020
Amplifier SINAD list

And given I listen almost entirely to 16/44.1 streaming on Amazon Music HD, that 5db means zip..

Absolutely amazing to me anyone rational would buy these things, but it certainly an example of 'whatever floats your boat'..
L

Always wonder if such overkills are really needed..
Click to expand...
To me it looks more like a casting than billet

Cahudson42 said:
Absolutely amazing to me anyone rational would buy these things, but it certainly an example of 'whatever floats your boat'..
Click to expand...
But does your LG come in its own aluminium faraday cage?? lol
You must log in or register to reply here.
Share: Facebook Google+ Reddit Pinterest Tumblr WhatsApp Email Link