Should be promoted to front page @amirm

Which version do you have? 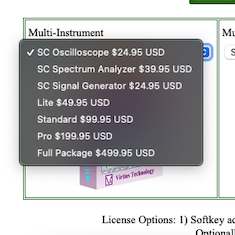 Should be promoted to front page @amirm

Which version do you have?

I have the 'Pro' version

Thanks for your kind words
OP
R 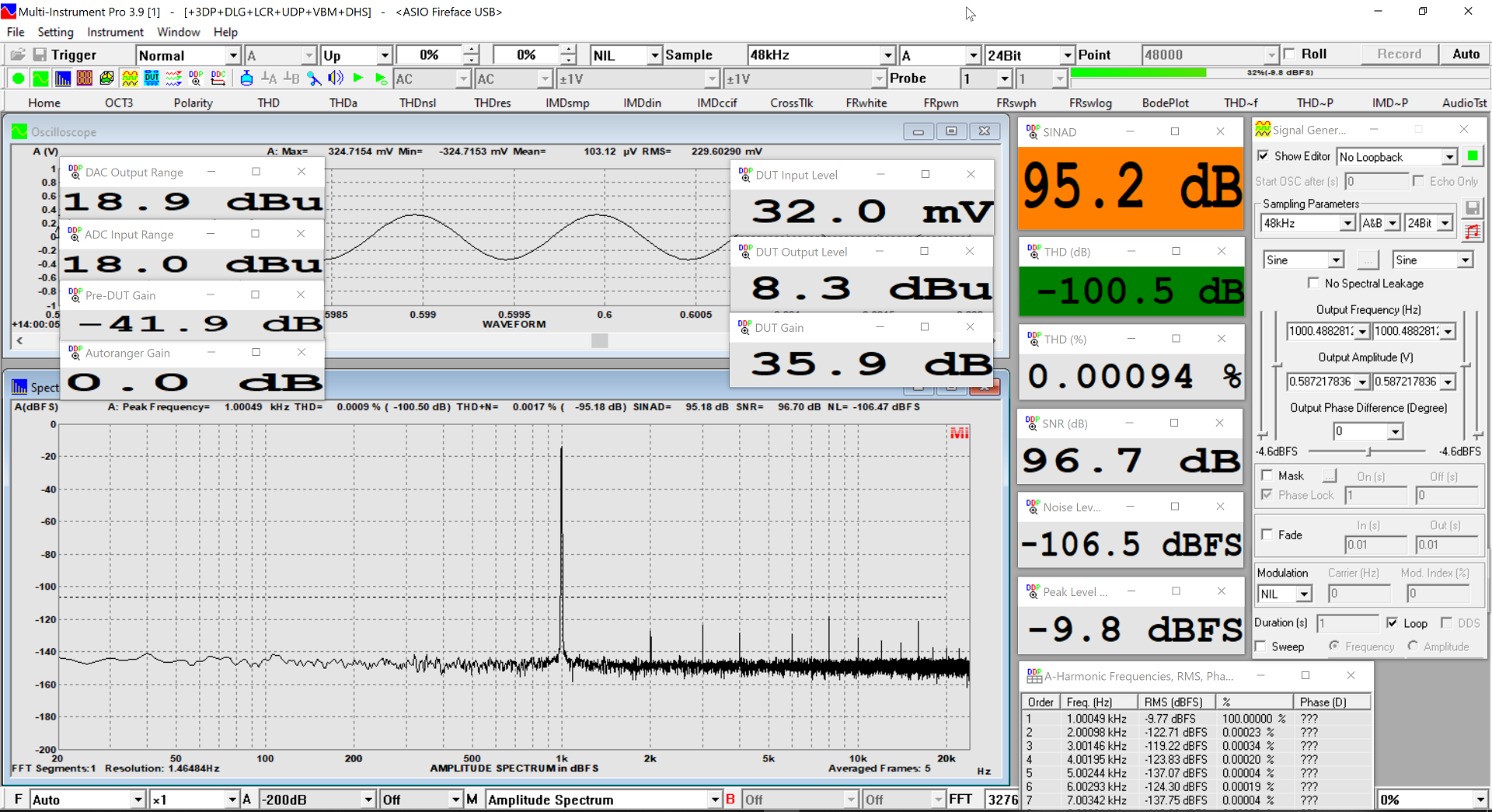 Notes:
I try to build kind of a Dashboard for Microphone preamp/input

First question is: Which level to standardize on ?

As different interface brands use different rules to set the level for 0dBFS, the "gain" marking for the digital mic preamp aren't really meaningful.
We need to align on a standardized input level, to reach a standardized dbFS level.

The most used microphone world-wide is probably the Shure SM58
As per Shure's specs, the output voltage is 1.6mV for 1Pa (94 dB SPL)

94dB SPL is quite low level. This is corresponding to the average SPL for a voice when speaking from 8mm distance from the cell.
Singers may rate much higher, for the same (typical) cell distance.
I found a source listing those levels: average singer level 115dB SPL, peak at 135dB SPL.
Singers reaching those levels are not that common though.

I suggest to normalize a Mic Preamp input level corresponding to 120dB SPL, or 32mV rms
But we are recording with some range, to allow peaks, so let's say that this level should correspond to -10dBFS level on the ADC.

For analog, as a comparison, that should then correspond to Max level before >0.1% distortion - 10dB.


Test signal generation
To generate that level, I use the combination I described in this post
A combination of a Radial ENgineering SAT-2 passive attenuator and a passive Radial JDI DI box (Jensen transformers - XLR input selected)

I then get the above Dashboard for the RME UCX II Mic in
That's corresponding to a "+36dB" gain setting
Which is to be expected:
Max range at "0dB" marking is +18dBu for 0dBFS (EBU standard)
32mV signal is -27.7dBu
Therefore, a 36dB gain marking to reach -10dBFS is in line with common logic.
(We'll see later this is not true for all interfaces)

For comparison, I ran the same with an analog Millennia HV-3C microphone preamp (>$2000 for 2 channels) and RME ADI-2 Pro fs R
The later is also my DAC

Here are the results in that combination
At -10dBFS 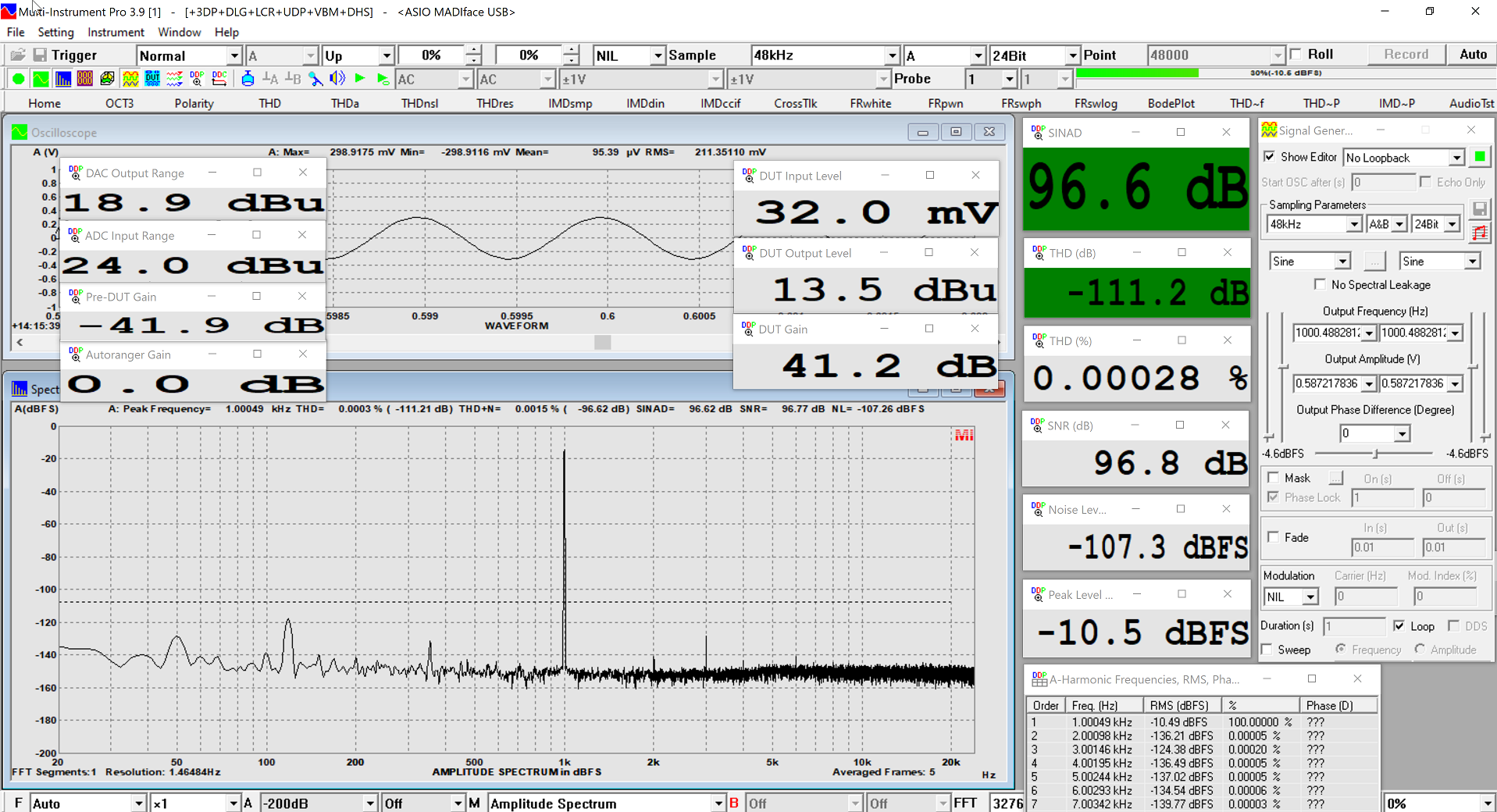 But the Millennia is capable to reach +27dBu at the output without distortion increase, so it's probably fairer to allow -7dBFS on the RME's 24dBu input range 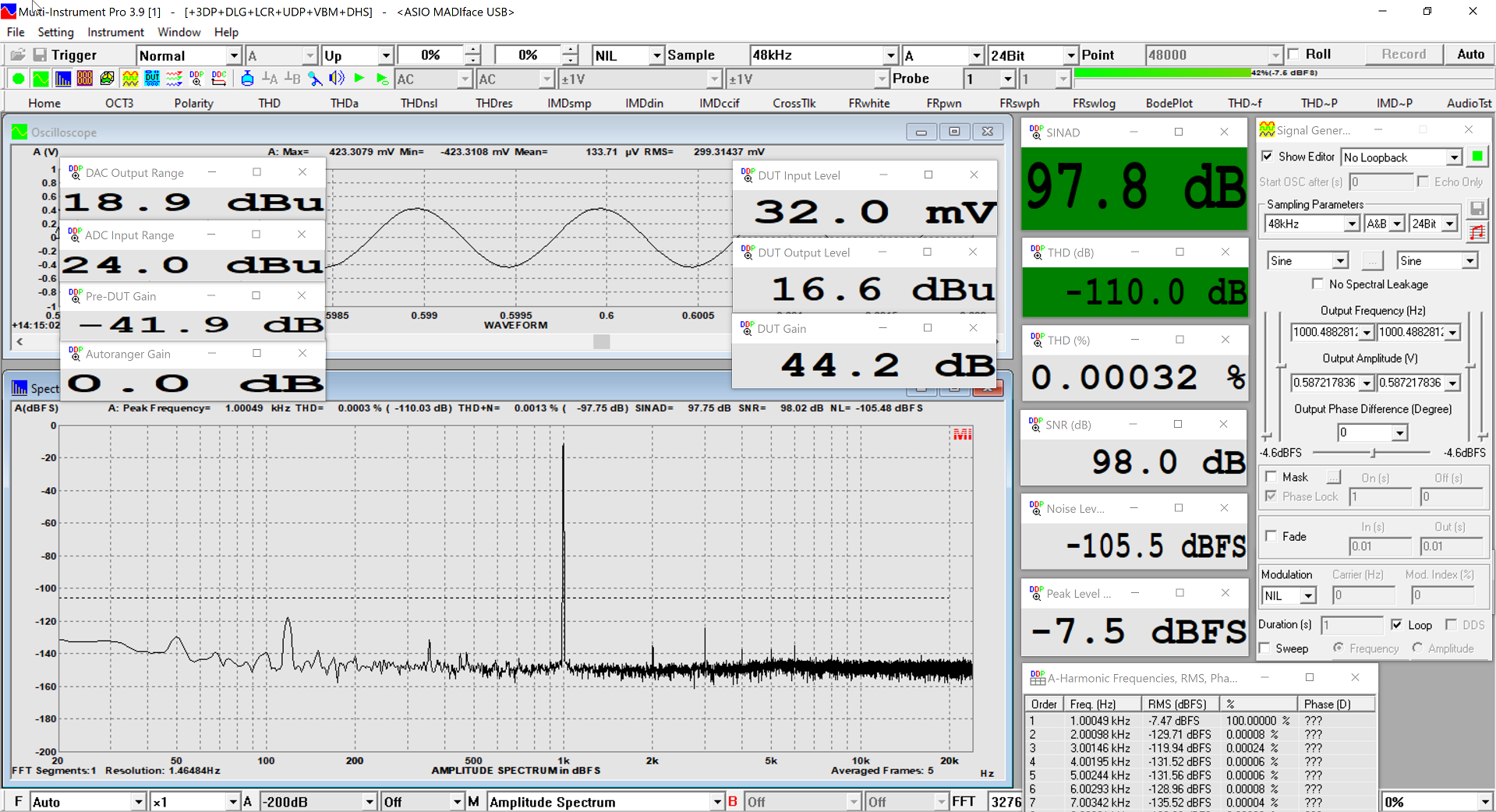 Bottom line
The RME UCX II Mic input is not bad at all.

As a point of comparison, a dashboard measured with same input signal for an interface that was one of the most frequent on live events for years, the Yamaha AD8HR 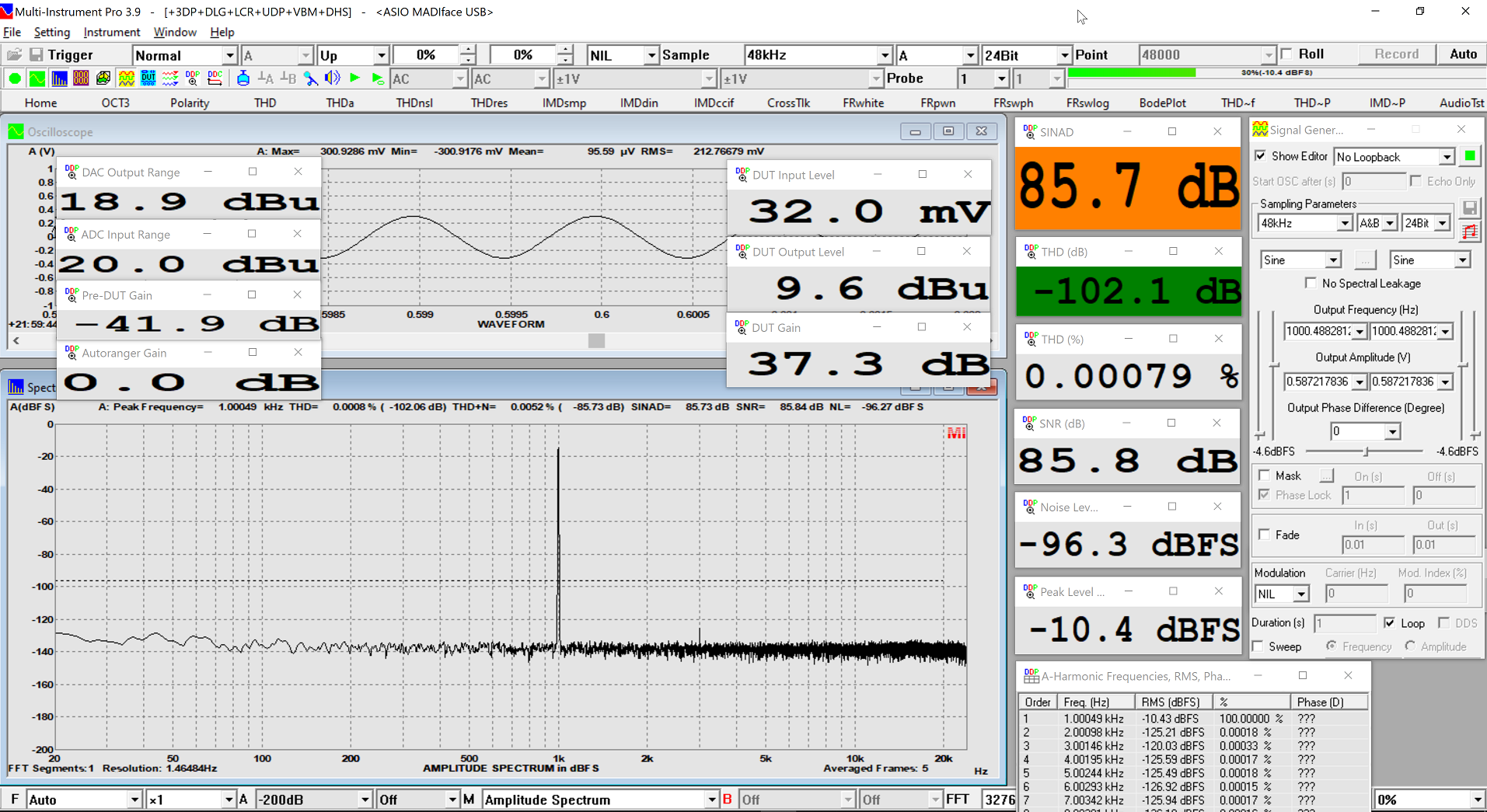 Do you happen to have the Motu M2 or M4 to make the same measurements of the mic input as the above?
OP
R

Trell said:
Do you happen to have the Motu M2 or M4 to make the same measurements of the mic input as the above?
Click to expand... 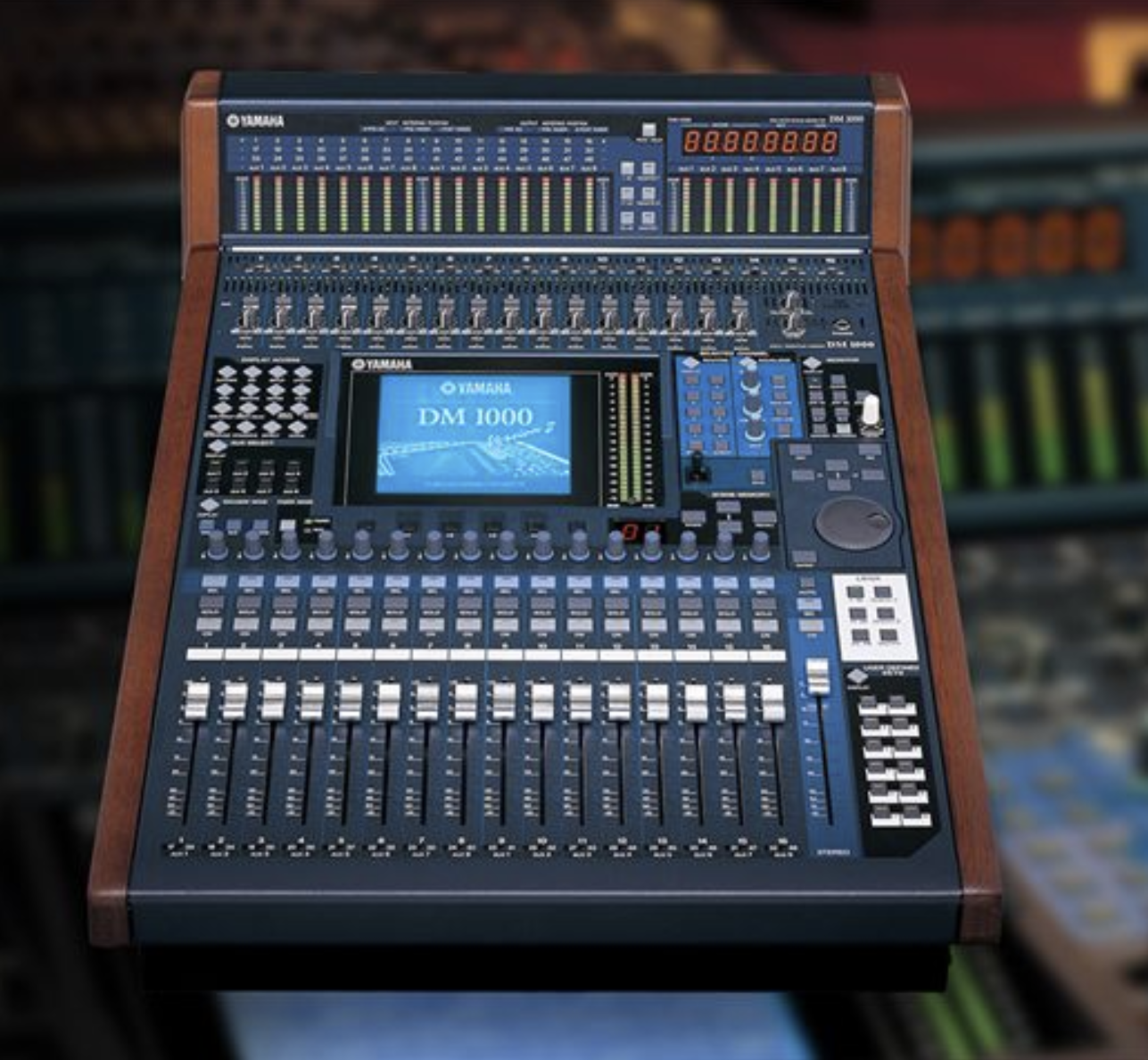 Here is the Microphone Preamp Dashboard 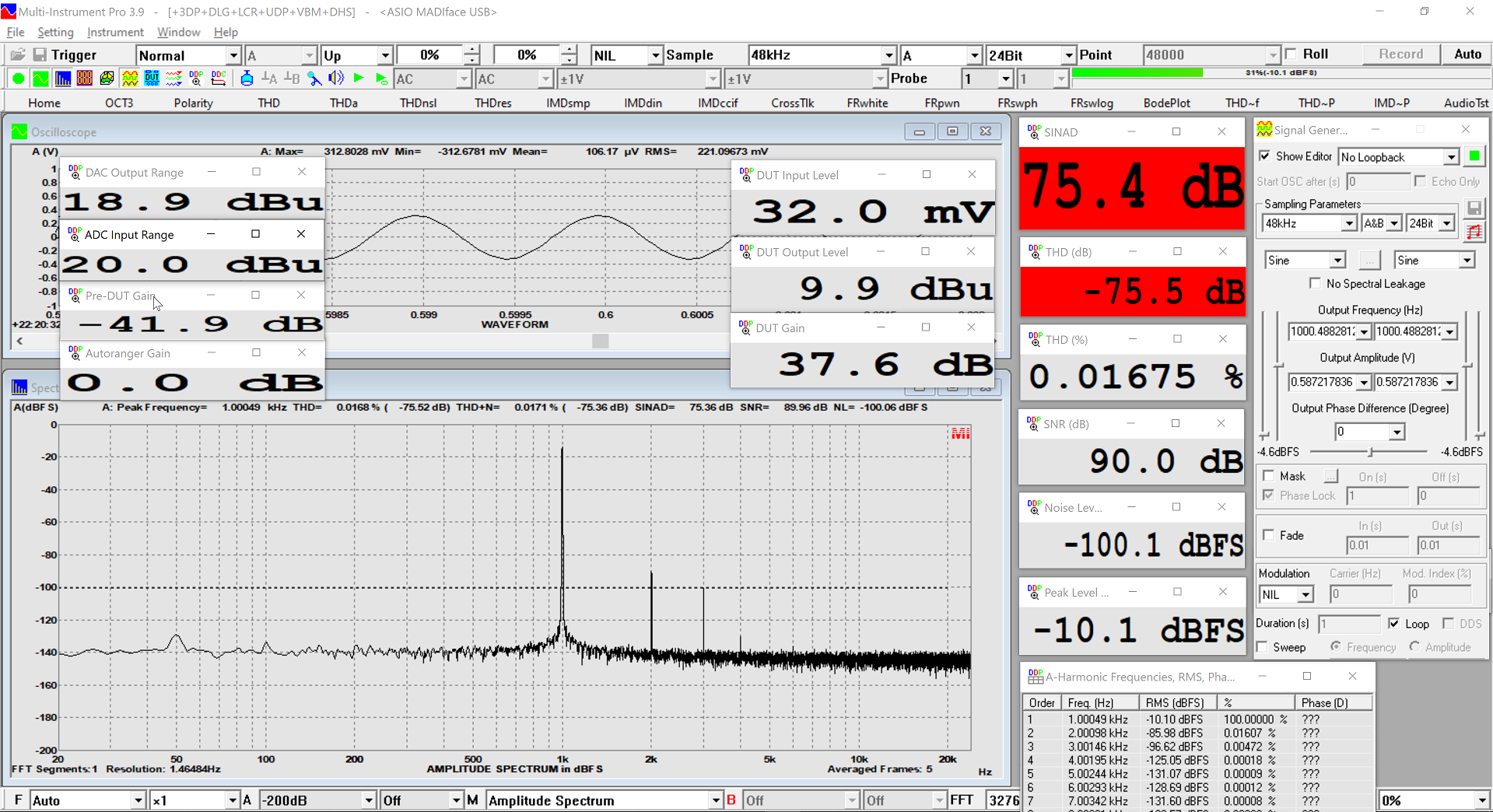 and, for reference,
The RME is doing GOOD 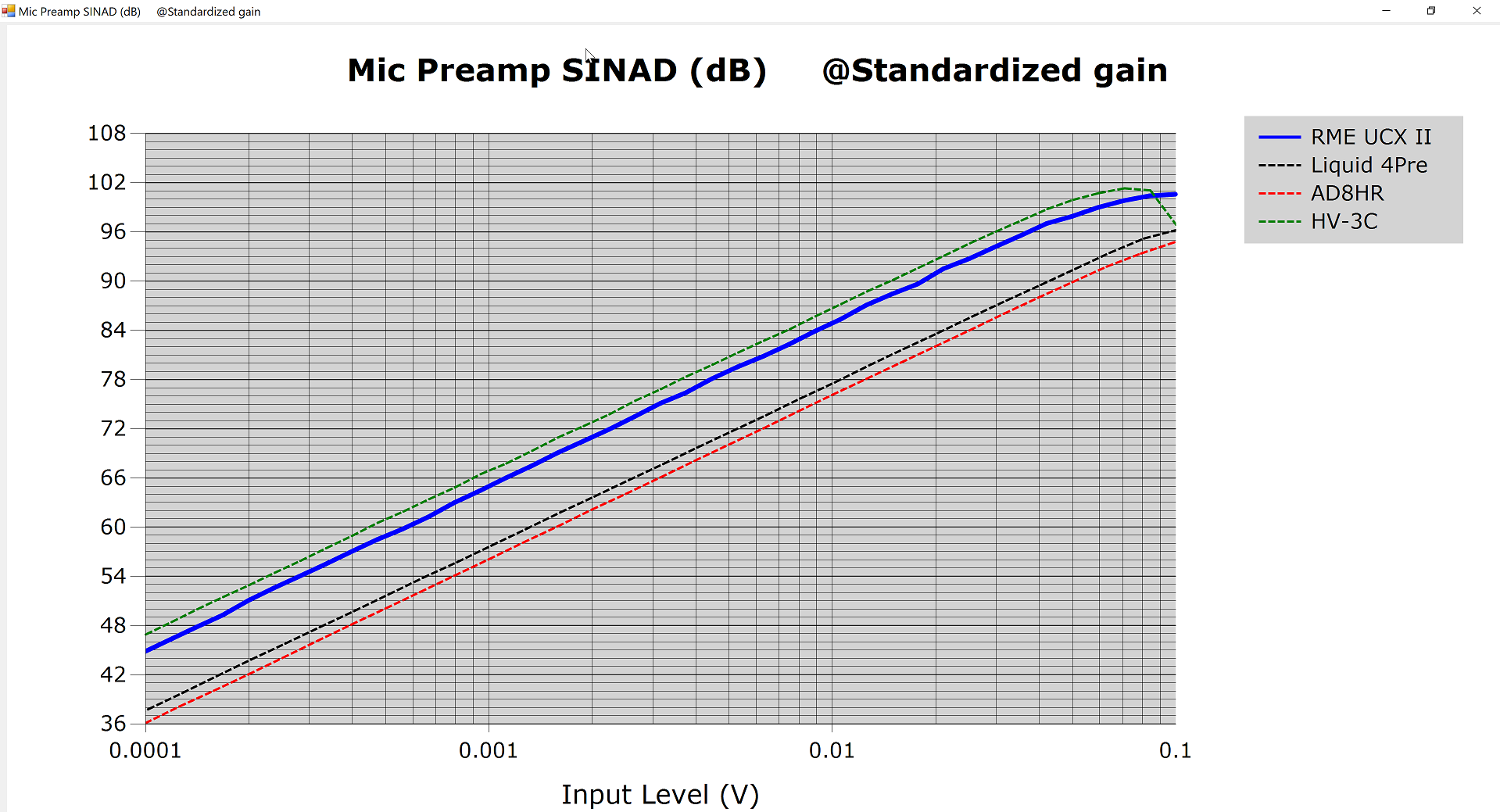 I also tried with my venerable Yamaha DM1000, but noise level is quite unstable
Still enough to measure the huge gap, though.
I expect a 01V96 to behave the same. 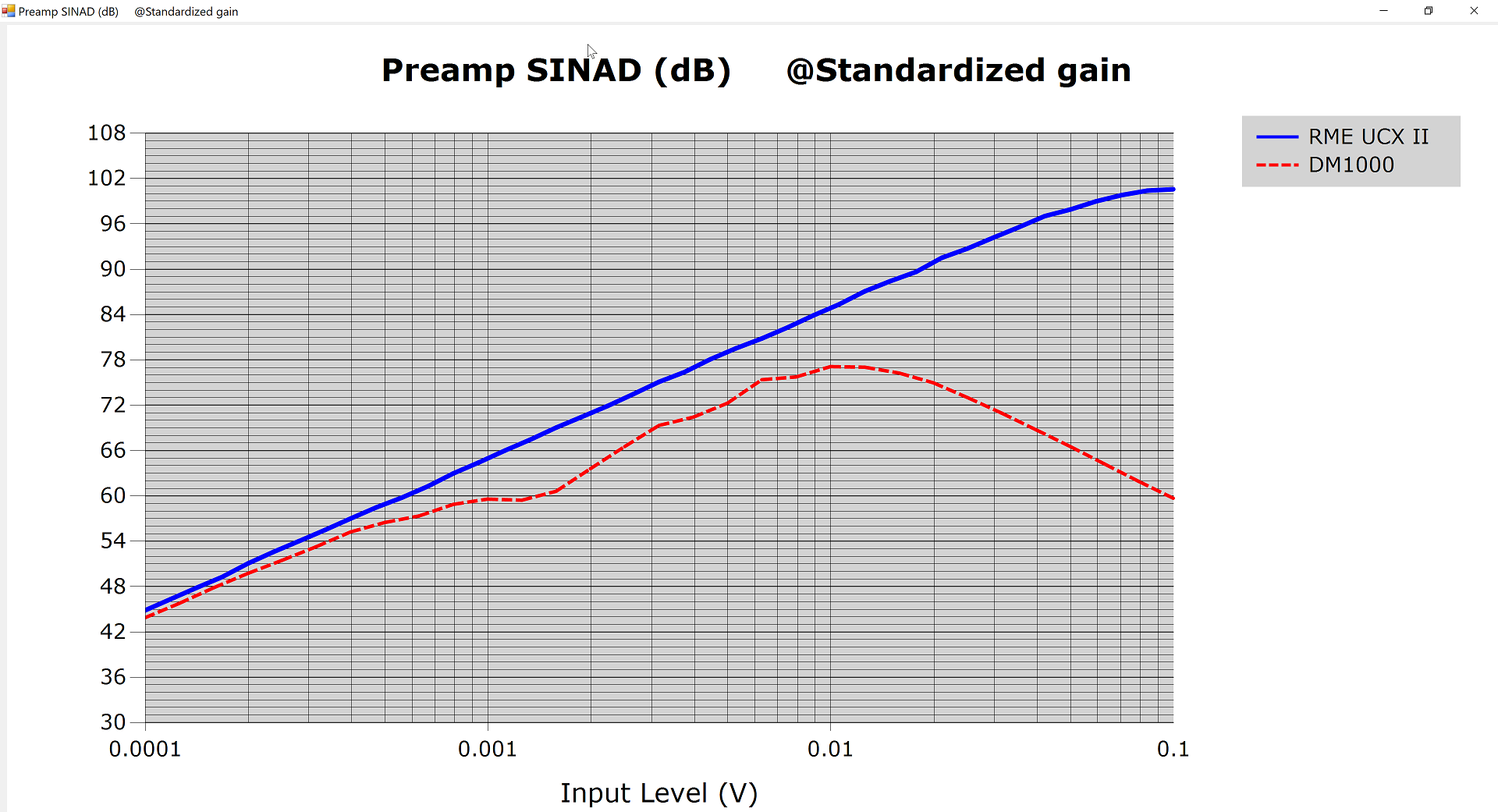 The above graphs are build as follows

2. Select the highest preamp gain where THD of the amplified signal will remain <0.1% (-40dB)
For a digital mixer, that will usually be 0dBFS.

This gives us realistic conditions, I think:

In real situation, for a given signal level, we set the gain.
In this case, that's corresponding to around 120dB SPL on an Shure SM58, if level remains at -10dB of maximum.
The selected gain looks realistic if compared to real life experience.

Then we vary the signal accross a wide range, just like music would.

That method also allows to compare analog preamp and digital preamp.
And even between digital preamps, to get a similar resulting output, even with different rules to specify a "gain" figure.

Comments and suggestions are welcome.

Perhaps @amirm could be enticed to do similar measurements for audio interfaces for the mic input?

If the UCX II had balanced HP outs ... i would buy it on the spot without even thinking twice.
OP
R

Noodles said:
If the UCX II had balanced HP outs ... i would buy it on the spot without even thinking twice.
Click to expand...

Why would you need it ?
This one has enough power on tap for most headphones.
If you need more, you may still get the RME ADI-2 DAC or, if really you need balanced, the RME ADI-2 Pro.

Rja4000 said:
Why would you need it ?
This one has enough power on tap for most headphones.
If you need more, you may still get the RME ADI-2 DAC or, if really you need balanced, the RME ADI-2 Pro.
Click to expand...

Forgot to answer this earlier... cables mostly, i have custom cables for all my headphones and they are all balanced, not because of sound quality or anything like that - mostly because of microphonics, inaudible noise floor (got a messy USB).
And i'd love to have mic preamps on my RME and not bother with inline ones ... The ADI-2 Pro does not have mic preamps sadly and i would need to use an inline one and then feed it to the analogue in.
So yes, if the UCX had balanced HP out it would be the perfect solution for all my needs.

You have a grounding issue in your setup (leakage current over your phones and body to earth). Remove that and you don't need balanced headphone cabling anymore. An audio interface like the UCX, no matter from which manufacturer, will never have balanced phones outputs.

Oh, believe me i tried ... i've managed to get it down very low using a USB power split to external 5V and with normal headphones it is barely audible, but if i plug in something like an IEM i can still hear it and it is annoying when nothing is playing.
So stuck with balanced for the moment ... hopefully when i upgrade my rig and change video card and motherboard (its coming from coil whine from the GPU pcb) then yes, i would not need balanced ... until then....

If the USB connection causes this get yourself a galvanic isolator like the Intona (mentioned in this forum often enough), or a cheaper one like the newer Topping (haven't tried that one myself).
You must log in or register to reply here.

K
Does slaving a DAC unit to an Audio Interface make the quality worse?