Here are some measurements of the new RME UCX II Interface
Please apologize if there is any error here.
Don't hesitate to ask or flag in case of doubt.


The RME UCX II is a new small USB interface from RME, belonging to the UFX II and UFX+ family.

Its small size (1/2 rack wide and 1U high) is the same than the RME ADI-2 Pro fs R that I use for measurements.
The purpose is very different, though.

You see both on this picture.
The UCX II is on top. 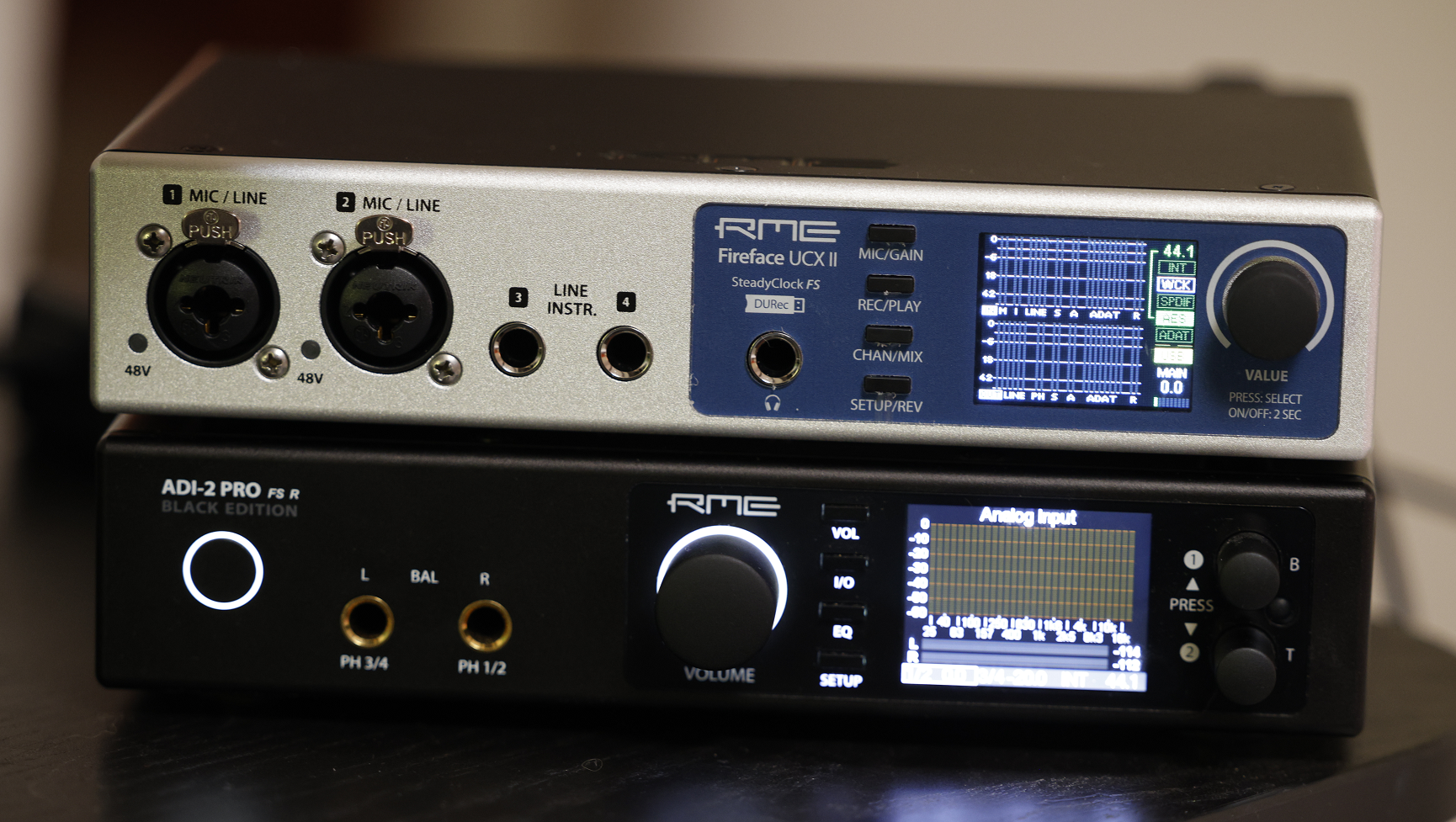 This is a powerful small interface, if limited in number of IOs:
USB, of course,
2 Microphone inputs, 2 instrument inputs, 4 line inputs,
6 line outputs and 1 stereo Headphones output
There are also connectors for MIDI In and Out, a configurable WordClock connector, ADAT in and out, and a USB DuRec slot. 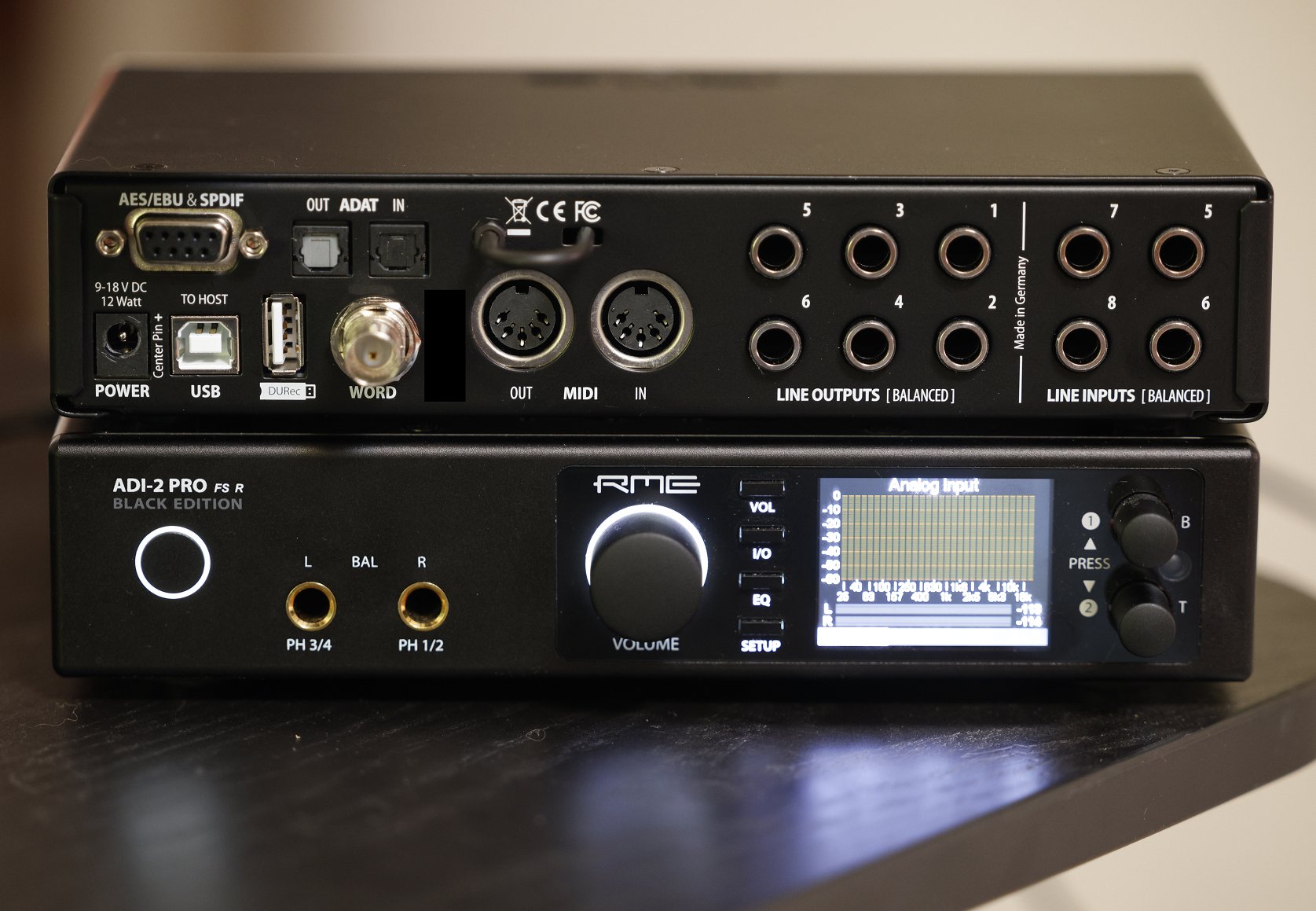 It also has AES/EBU + SPDIF in and out connectors through the use of this adaptor that plugs on the rear DB9.
The same than the one used for the RME ADI-2 Pro fs R. 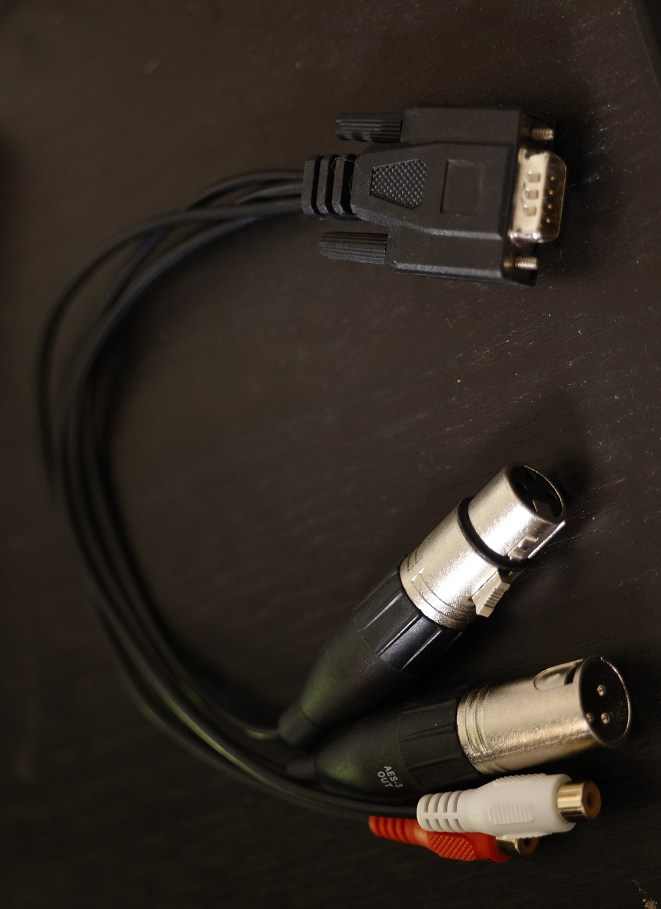 Power supply is the same lockable 12V DC 2A external that we find with the ADI-2 Pro fs R.
That of course means that it's possible to run the device on a 12V battery.
A very positive point in this case. 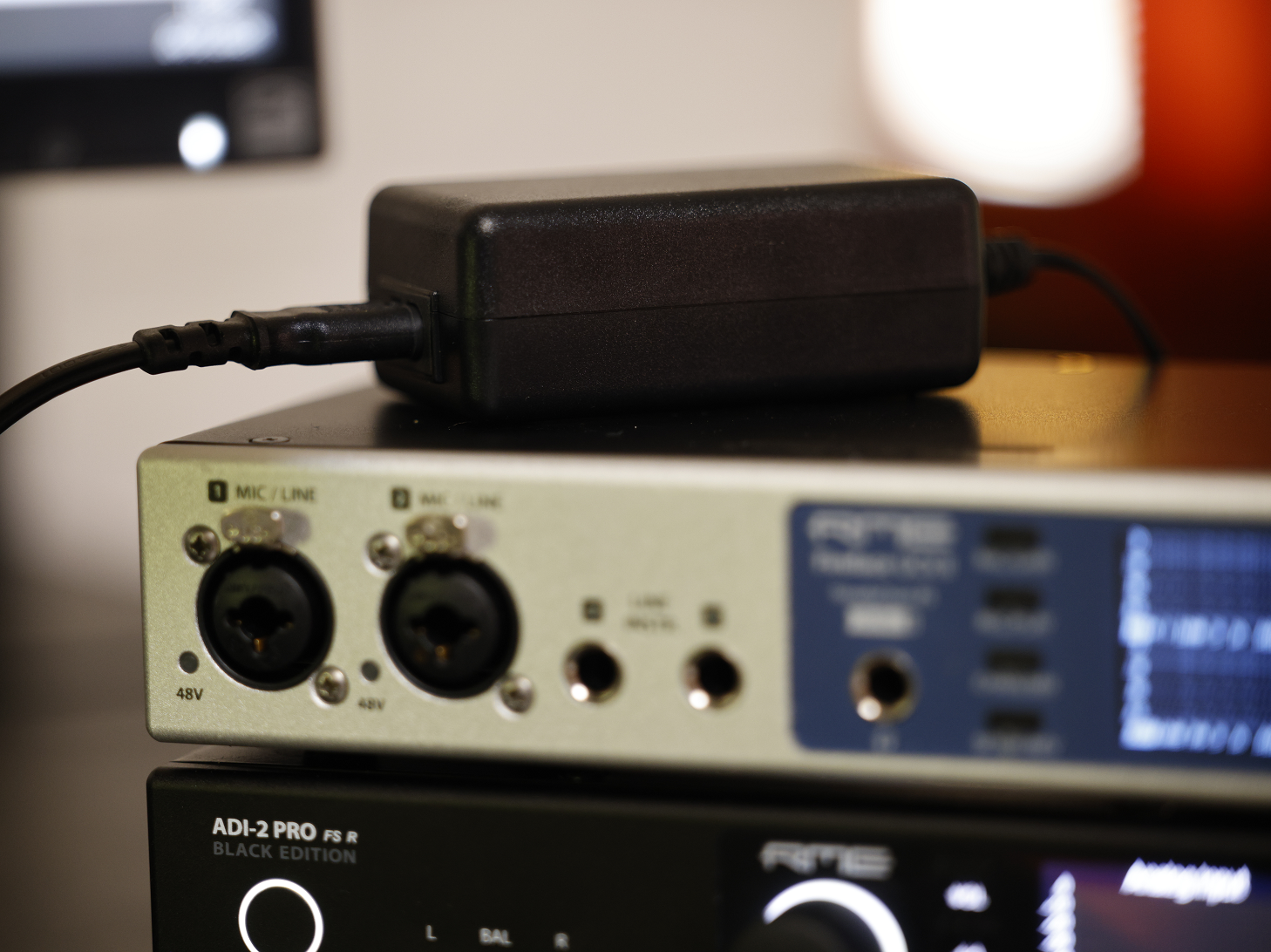 As usual with RME, the drivers on Windows are very stable.

And the (provided) Totalmix application is really easy to use.
So there is much more in there than just good measurements. 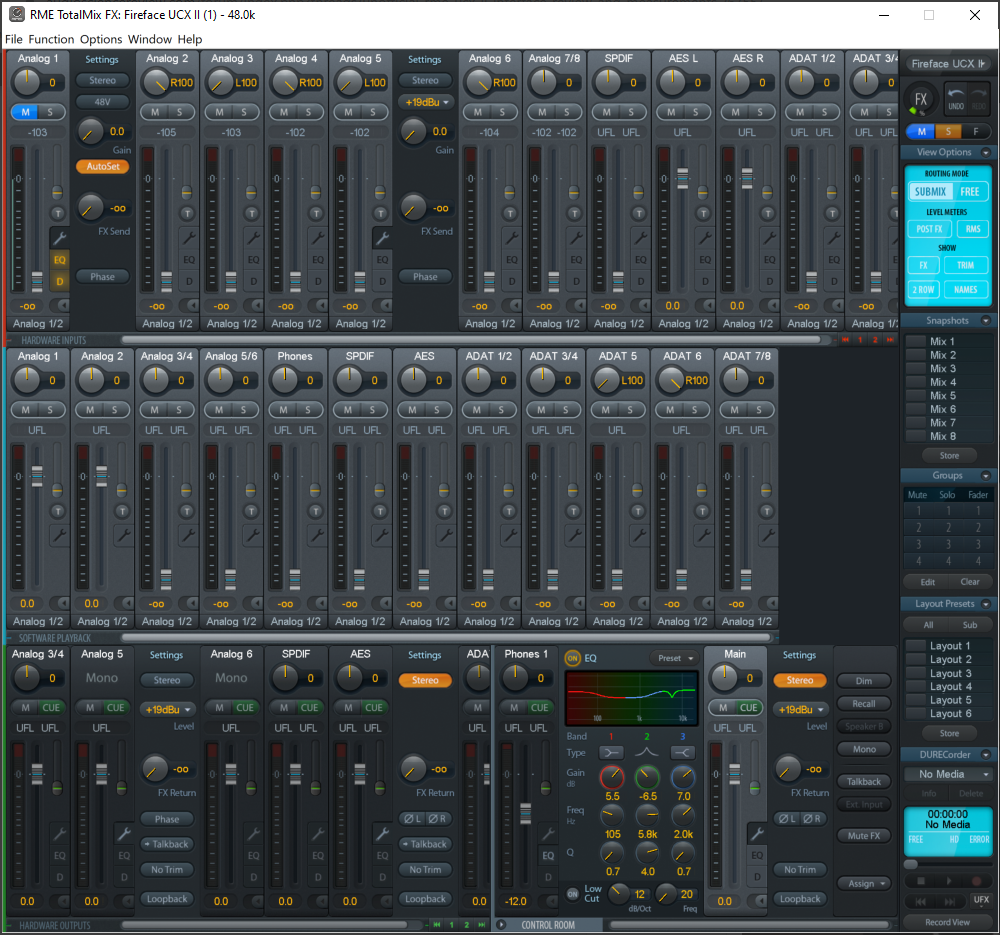 Measurements
I always perform my measurements using Virtins MultiInstrument 3.9 and some .Net application and SQL database of mines.
I own a license of MI.
The hardware consists of the RME ADI-2 Pro fs R.
A positively incredible device, with state-of-the-art performances, both for ADC and DAC.

Unless specified, I measure using the ADI-2 in "mono" mode, to benefit of a slightly increased performance, by summing (averaging) the 2 ADC or DAC channels.

I purchased the RME UCX II from a French shop.

Dashboard 4Vrms (48kHz)
We get a SINAD just shy of 105dB.
Not state of the art, but good enough for the usecase. And in line with the specs.
(NB: Voltage is not measured, but computed from 19dBu)
EDIT: I remeasured and updated with ADC range of +24dBu, which gives better result. 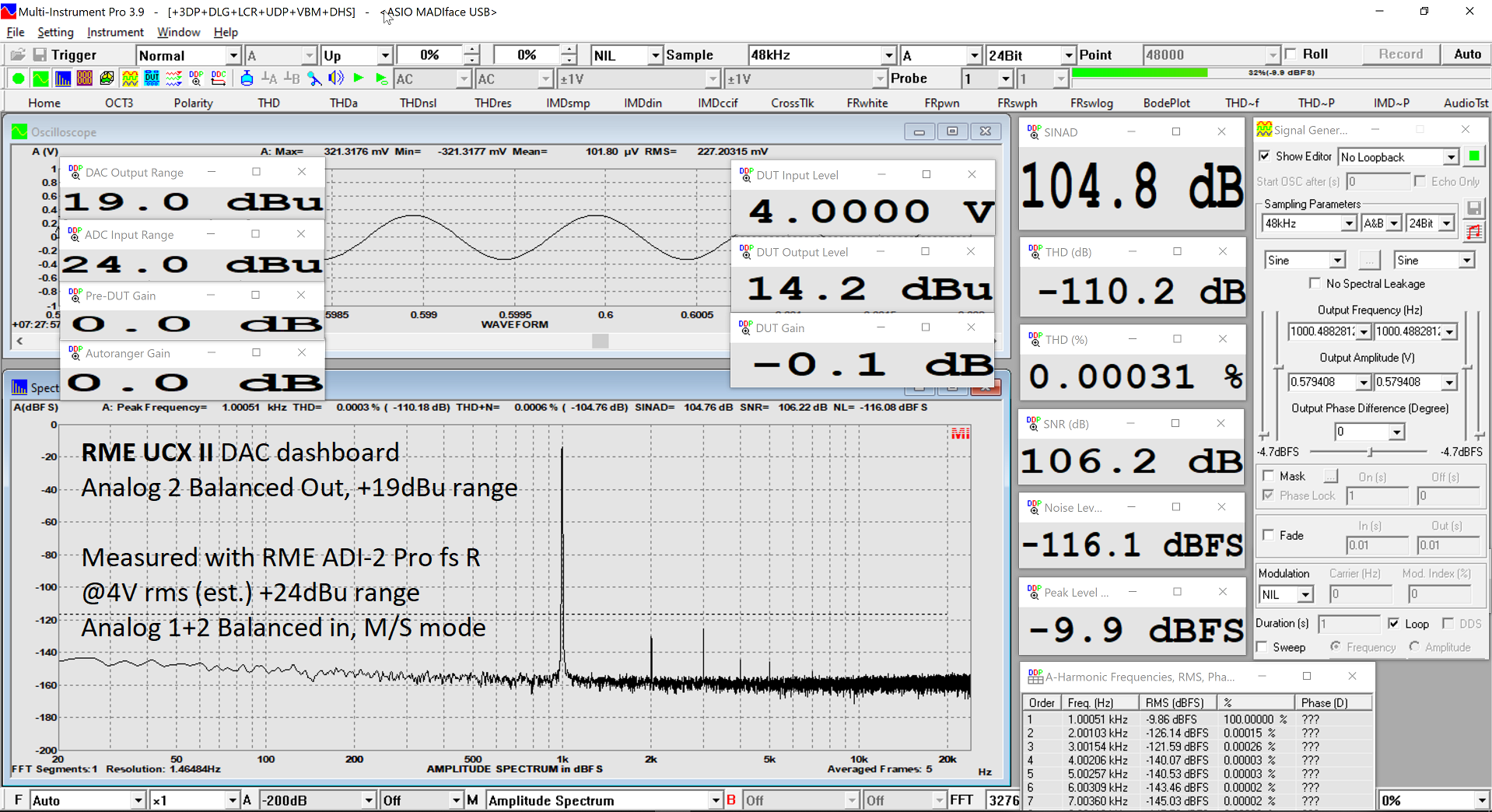 I plotted SINAD vs Level for the 3 available output ranges
It is noticeable that the +4dBu is in fact exactly matching the +13dBu curve.
This most probably means that the +4dBu range is provided for convenience only, by limiting the level in digital domain. 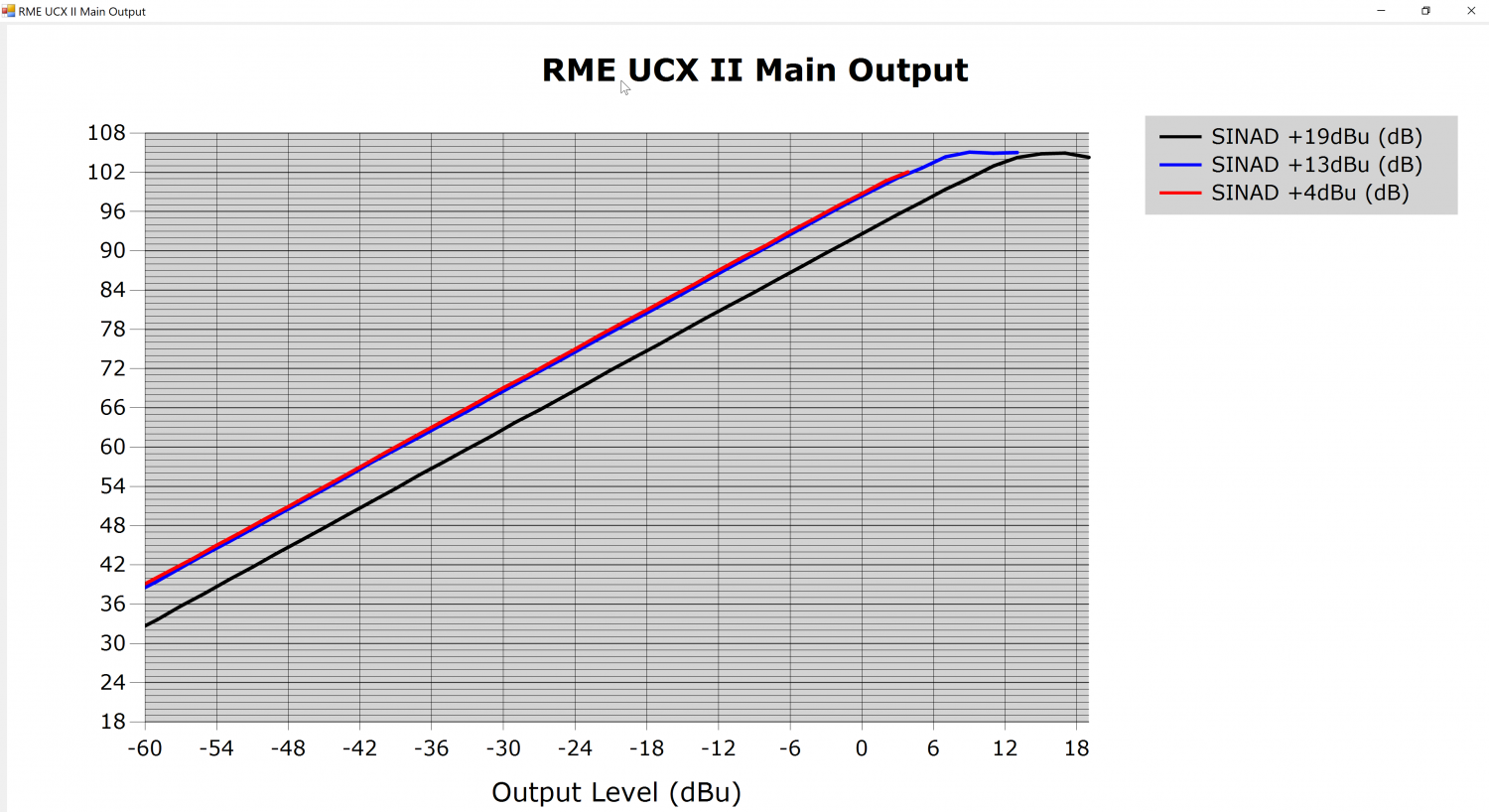 Jitter
(Source = USB, but we get exactly the same measurement from AES) 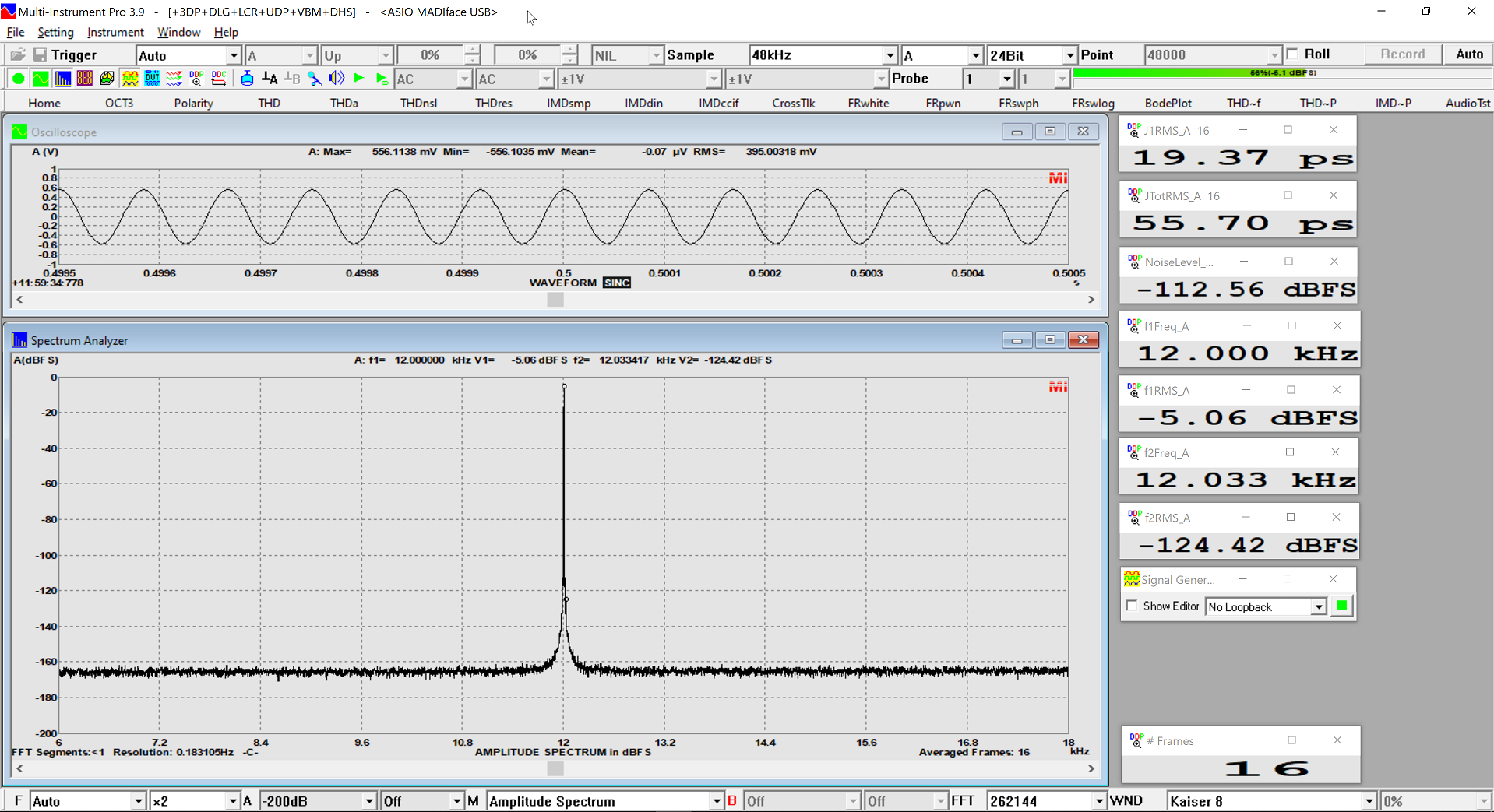 Level Linearity
Nothing to worry about 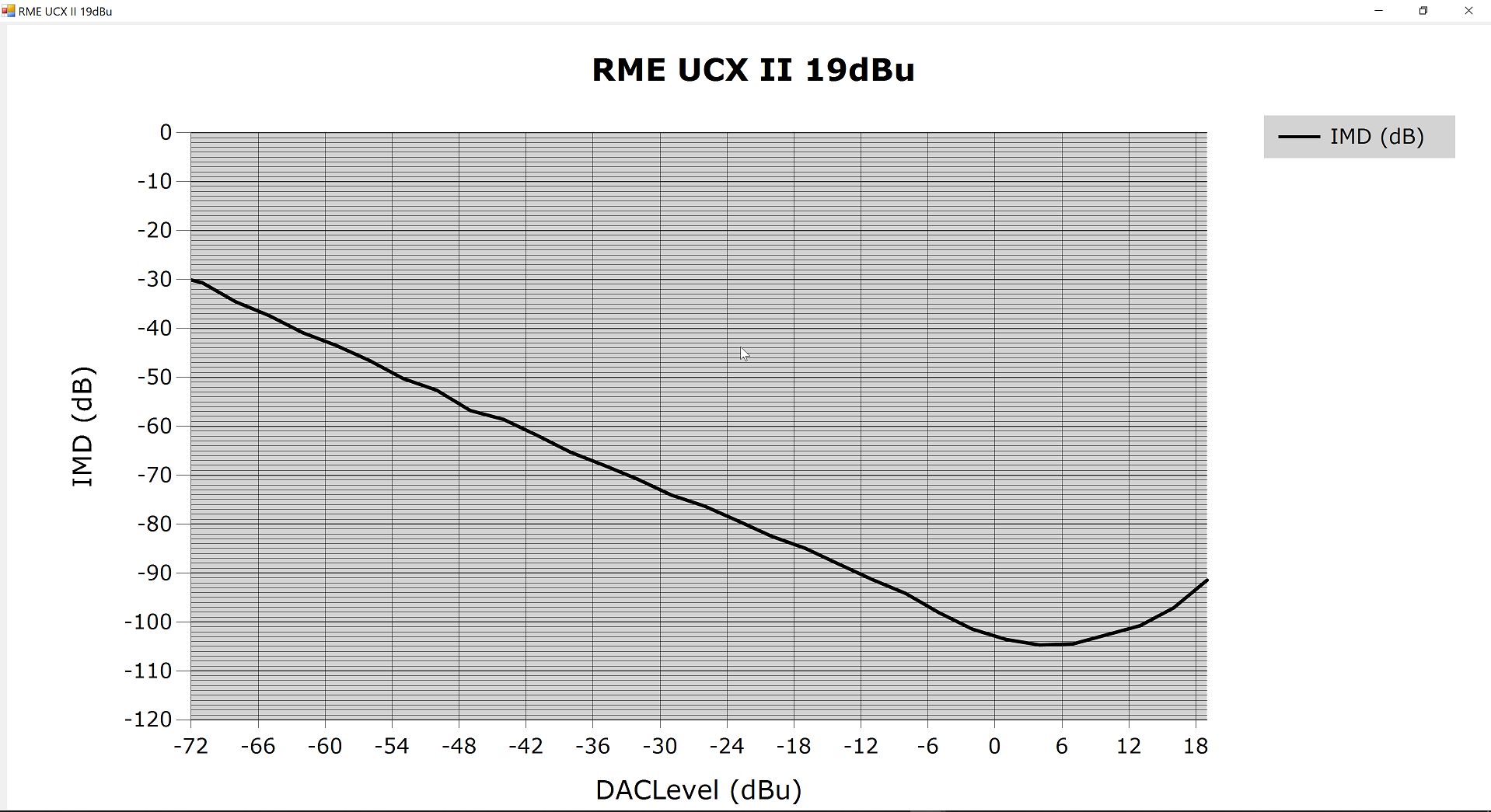 32 tones
No issue
This is using Amir's APx555 test file
32nd tone isn't displayed, since it's at 14Hz
EDIT: I now use the WAV file (better crest factor), another FFT Window function, 8 averages and proper 192kHz frequency and 256k points to align with Amir's 32 tones. 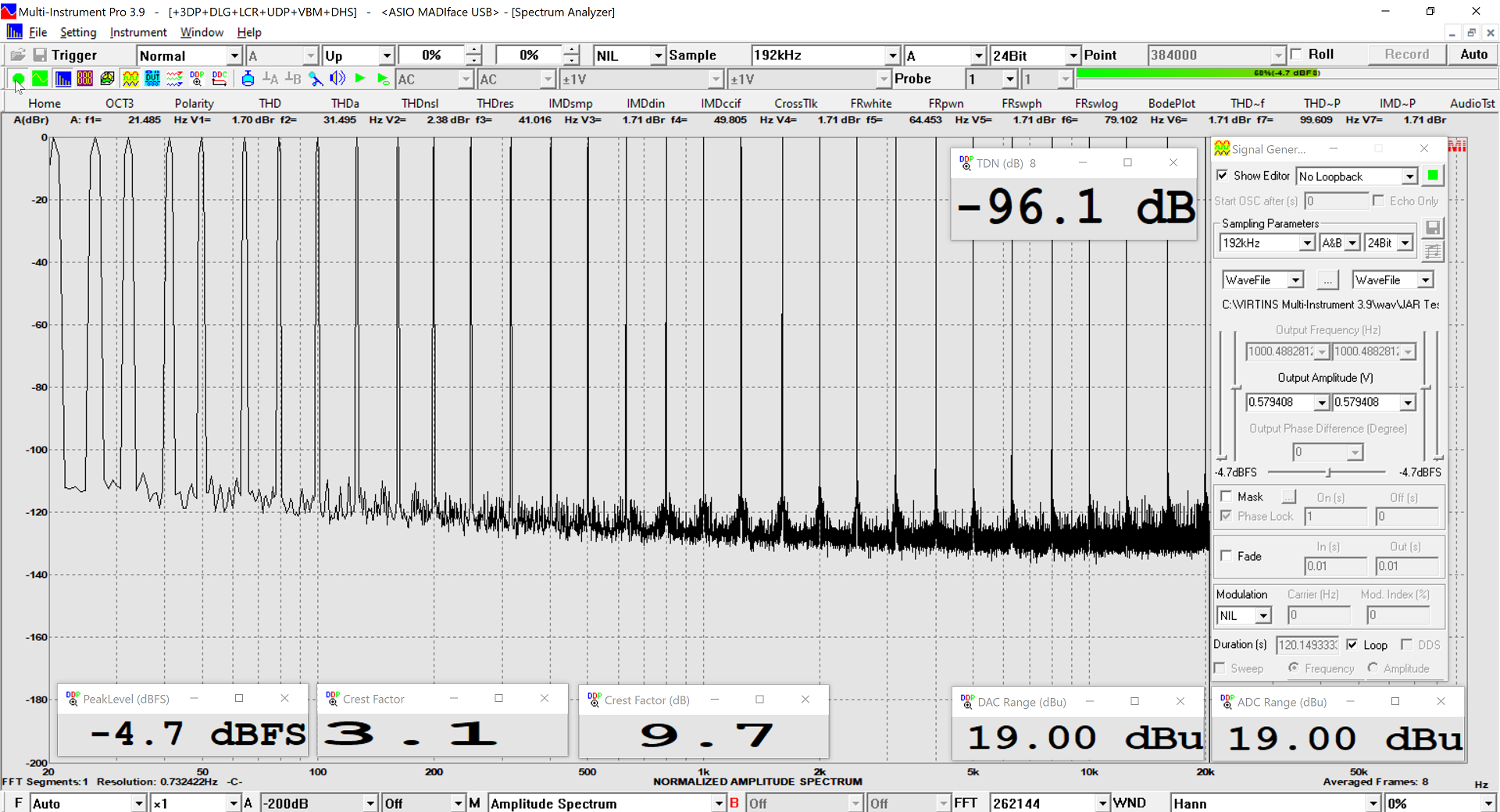 Filter @48kHz
EDIT: I re-measured this one after @MC_RME's comment. My original plot was using wong windowing. 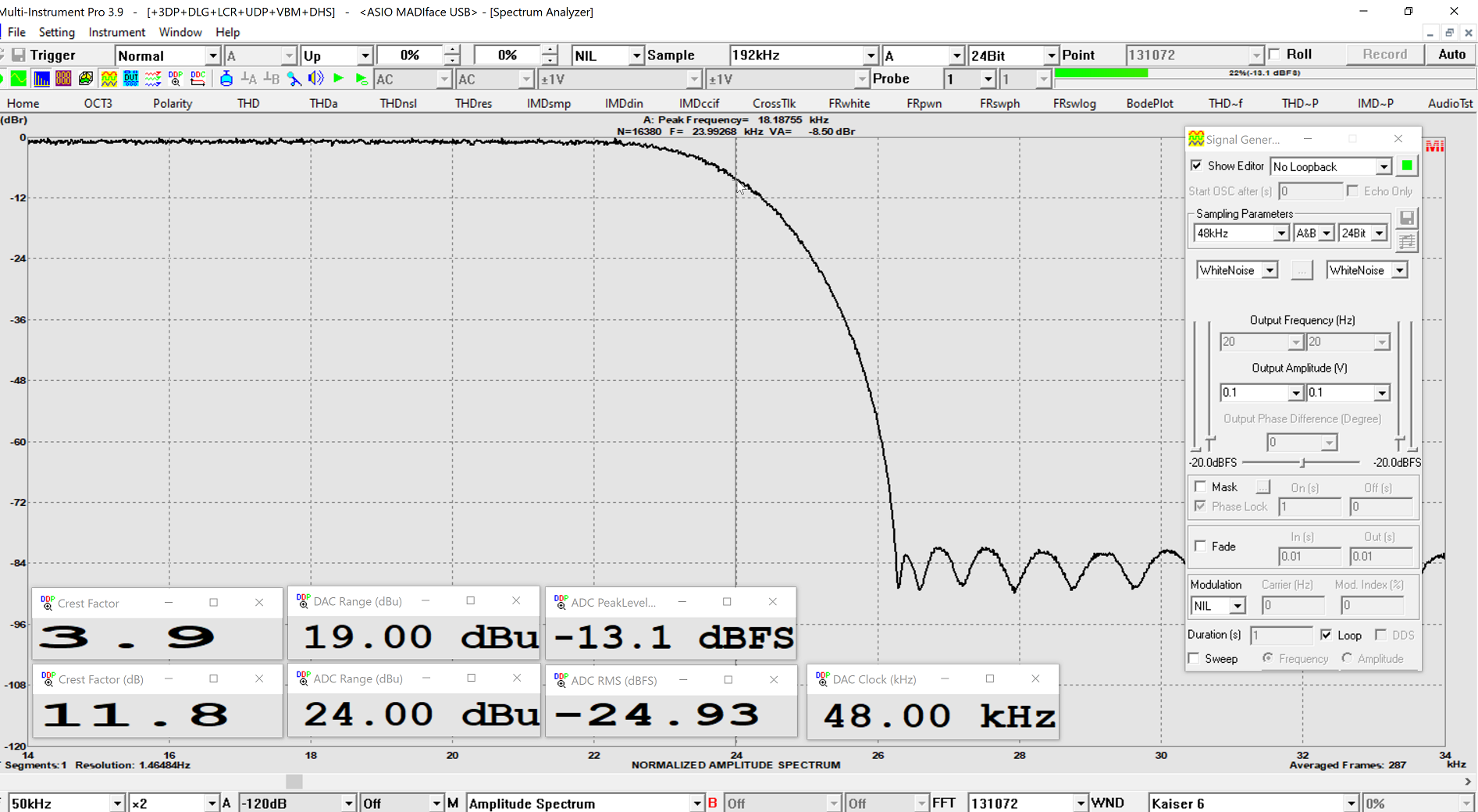 NB: This is a measurement I wanted to achieve for a long time but could never have to work.
Here it does, since the ADI-2 and UCX II have 2 different drivers. And MultiInstrument then allows to set a different clock for each device for a measurement.

THD vs Frequency @4Vrms (90kHz BW)
EDIT: At first, I had higher values and some strange peaks at low frequencies.
I now limit the number of harmonics to 5. 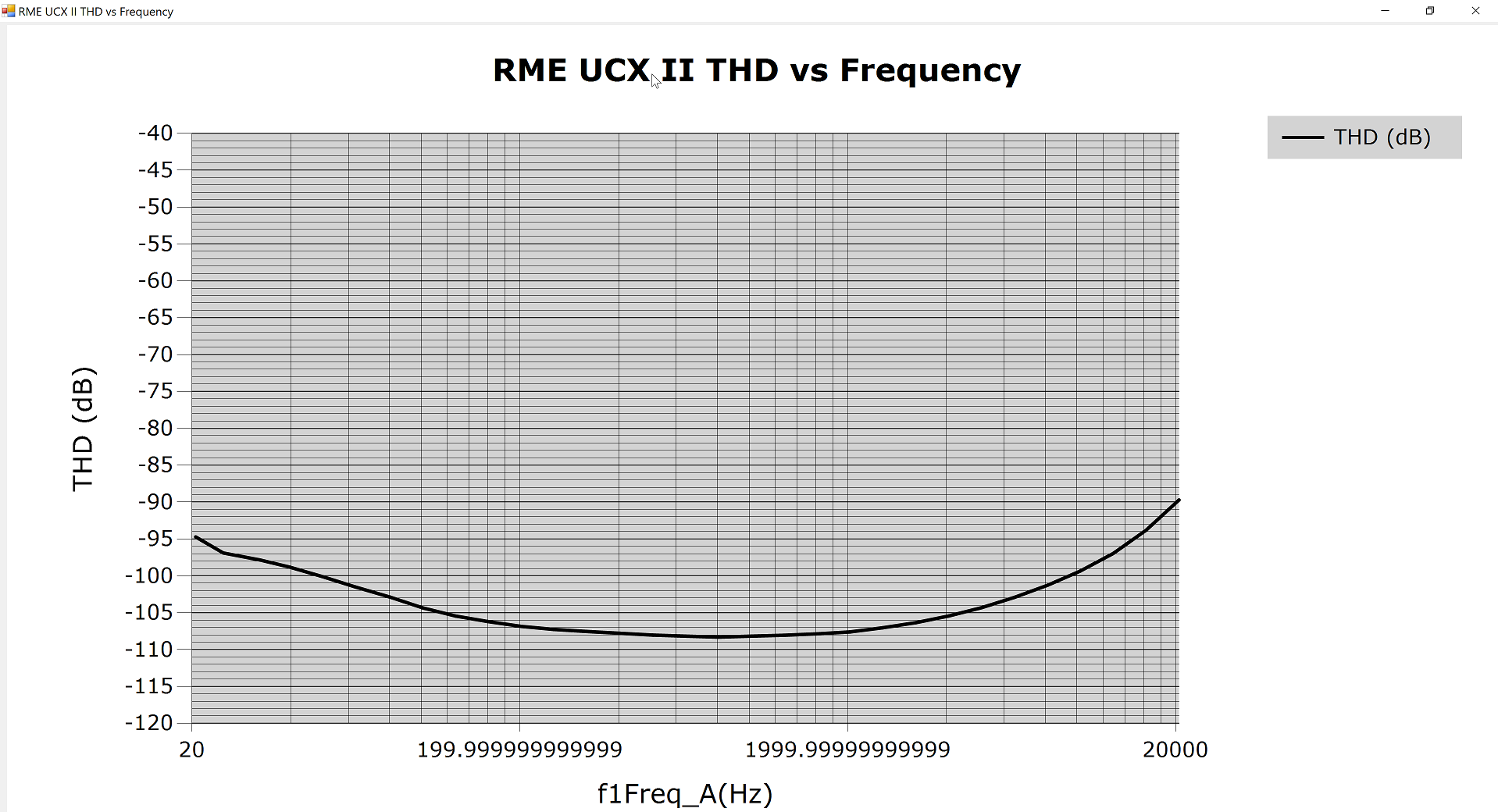 Square wave
I've run some more analysis on this.
Warning: as you can read below, I'm mostly experimenting here, so don't attach too much importance to this measurement

At low level, here is what the 1kHz square wave looks like 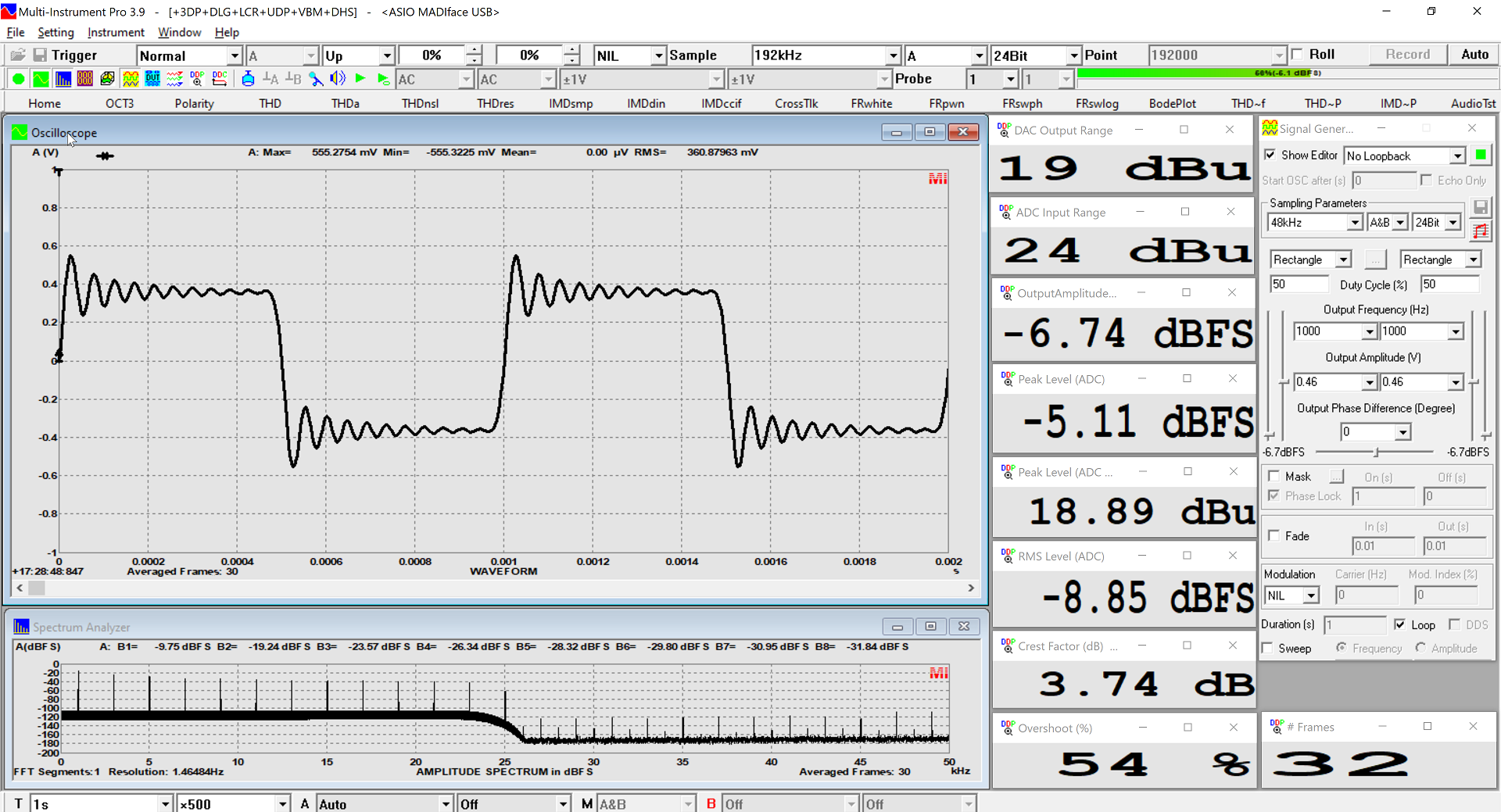 But if we run it at 0dBFS, it is somehow truncated
We see a reduction of 1.5dB of the Crest factor
Not too bad, though. Most interfaces are probably worse.
EDIT: Actually, the level reaching the ADC is higher than the output range of the DAC by almost 2dB, at 20.9dBu.
This is what I wanted to demonstrate.
(This is a torture test. Nothing looks like a square wave in real life) 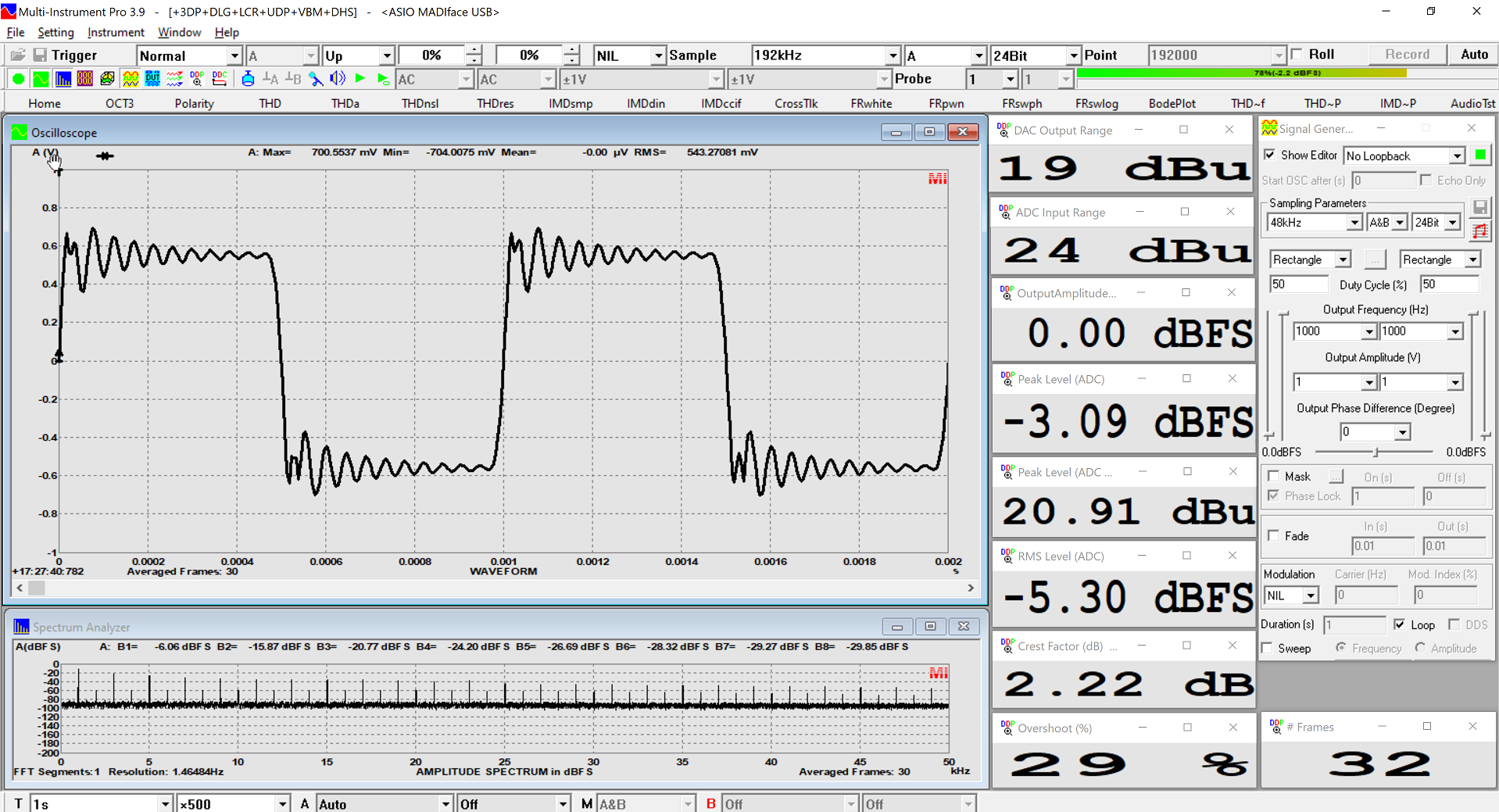 As from -1.5dBFS, there is no more truncation (Edited. See below) 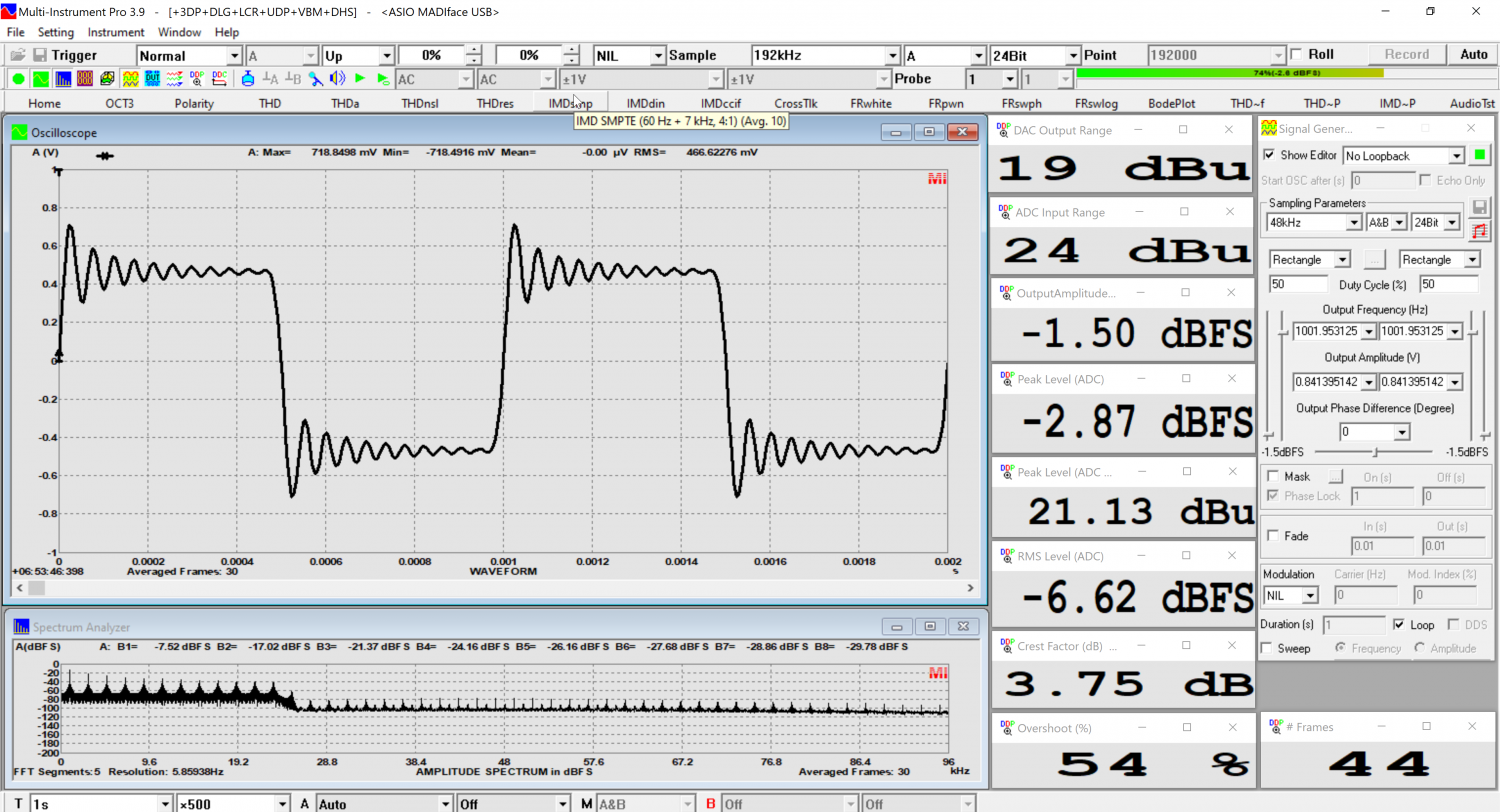 Frequency response à 96kHz
Here in 13dBu range. 19dBu is identical
For reference, the RME ADI-2 Pro fs R is plotted in red, since its ADC is not completely flat at that frequency. 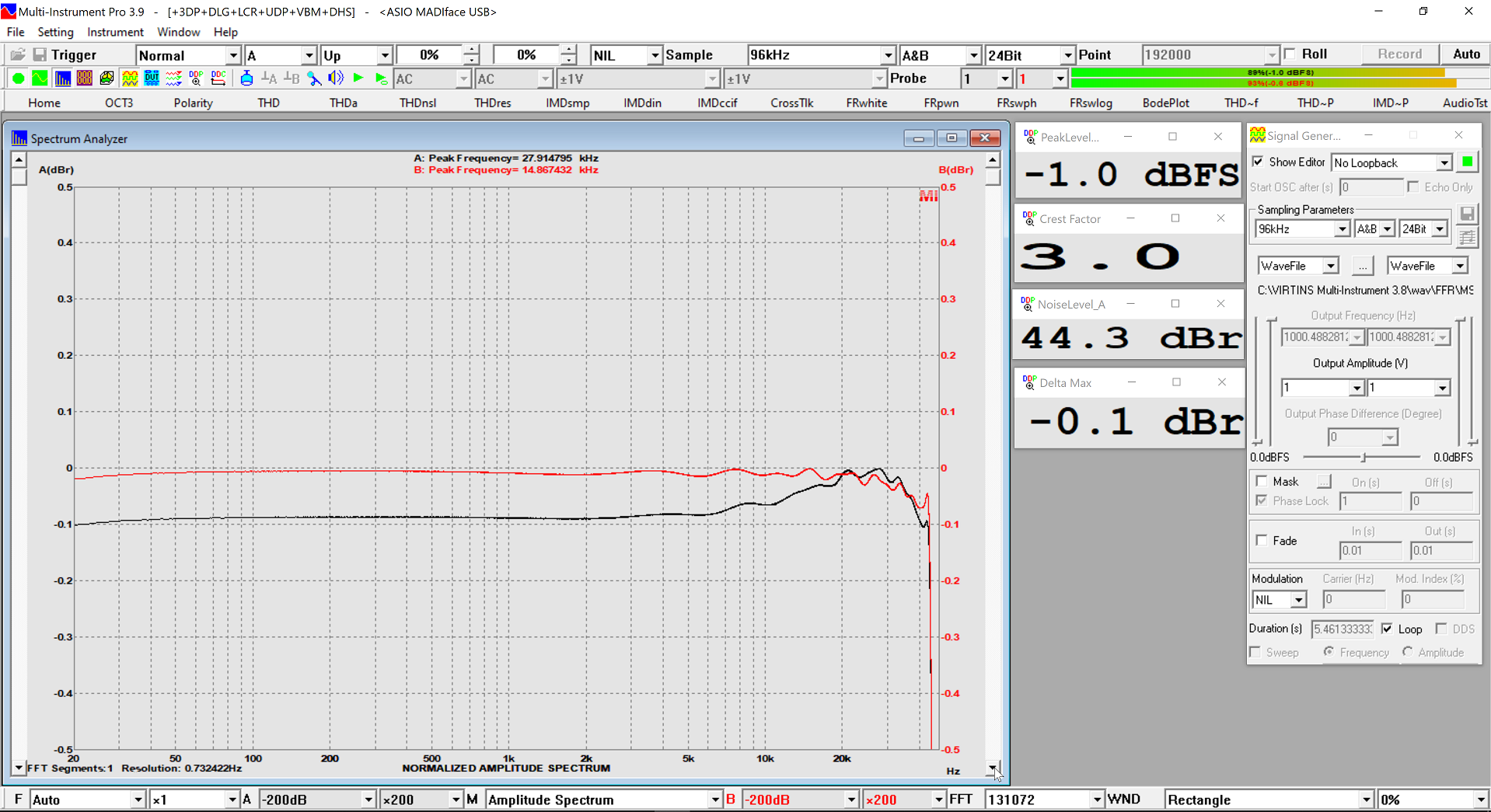 ... ADC measurements will come later
As an appetizer, here is the
SINAD plot for Instrument input 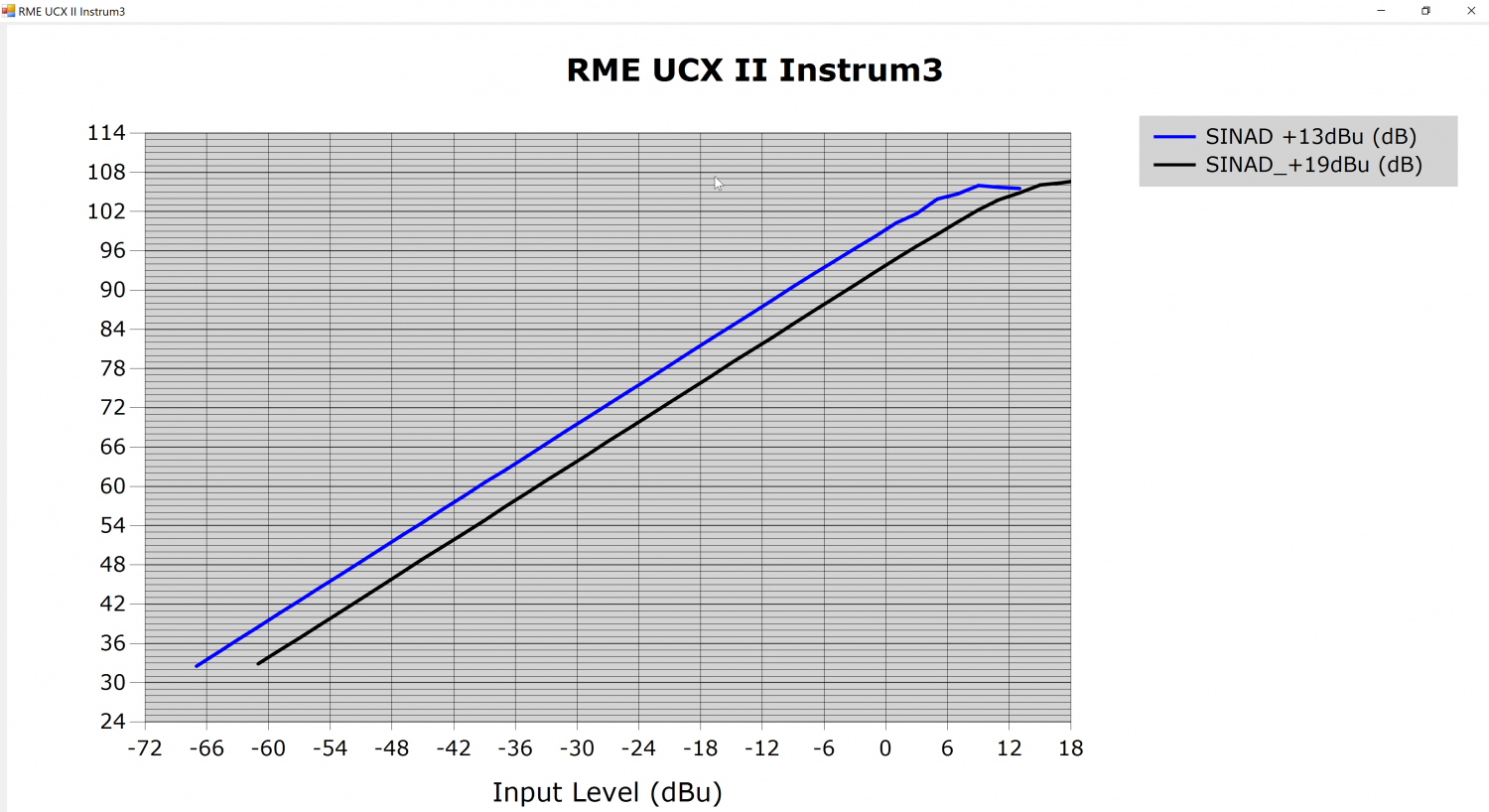 and here is the
Dashboard @4V in Loopback mode
(DAC + ADC = RME UCX II)
We clear more than required CD SINAD for the loopback.
Good news if you want to insert an external analog effect, which will most likely perform much worse than this. 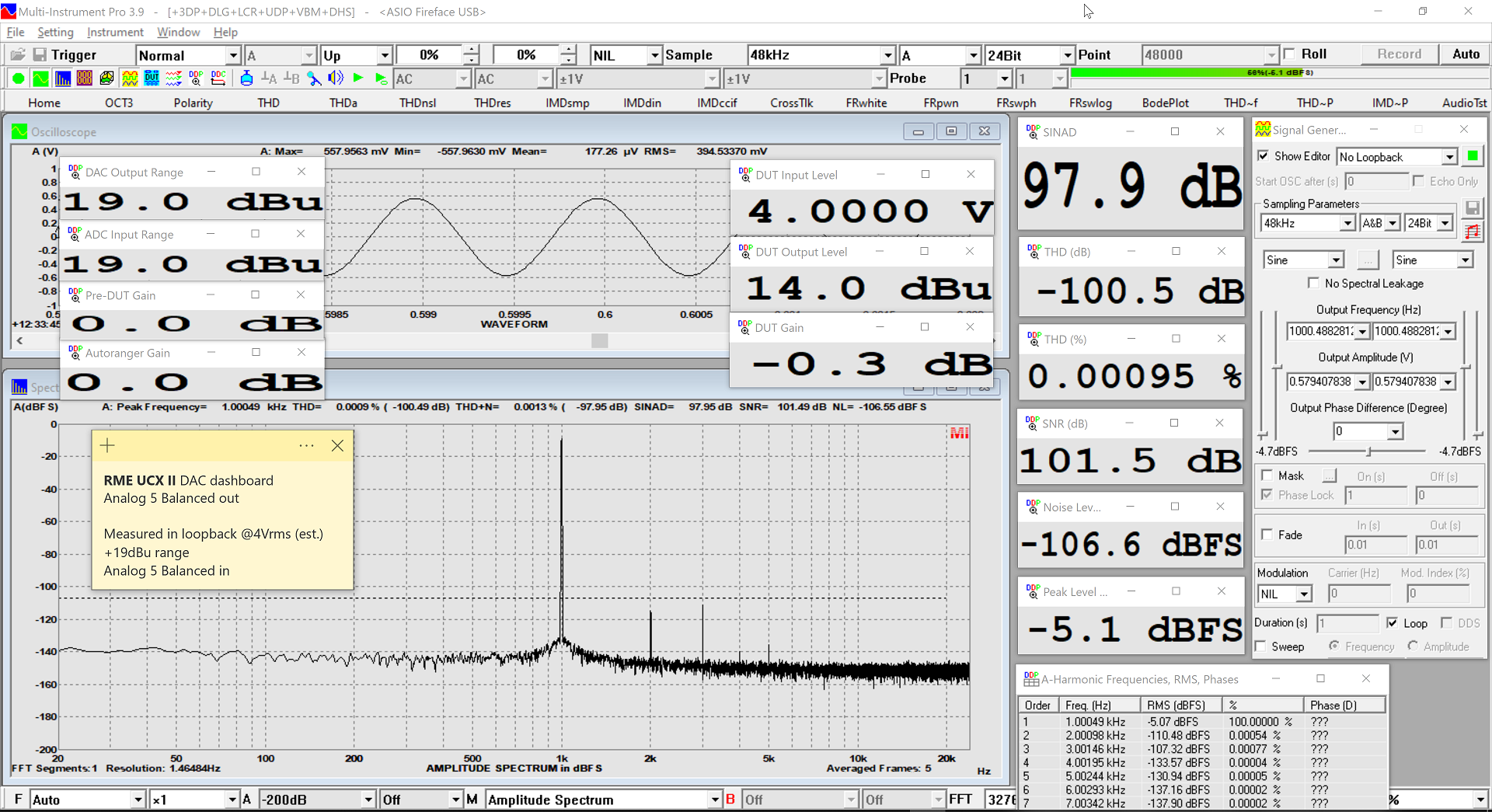 (In attachments, you may still find the plots that I updated, for reference)

You have to dial things down that far? It is obvious that the filter can't handle the big +3.75 dBFS peaks, but still does OK at +2.2 dBFS. (That would be in line with the purported ~+2 dBFS handling for AKM DACs, an AK4458 in this case.) So I would have expected everything to be OK by -2 dB at least and -4 dB at most.

What is peculiar is that the filter quite clearly is IIR, but from the DAC datasheet even the short delay filters appear to have a fixed group delay. Either that is not actually accurate and the GD variation was just left out or there's some DSP upsampling going on (but that wouldn't be matching what we are seeing, as I would expect hard clipping at 0 dBFS).
My audio 'blogalike' | Audio DAC and ADC History | Helpful Audio-Related Calculators 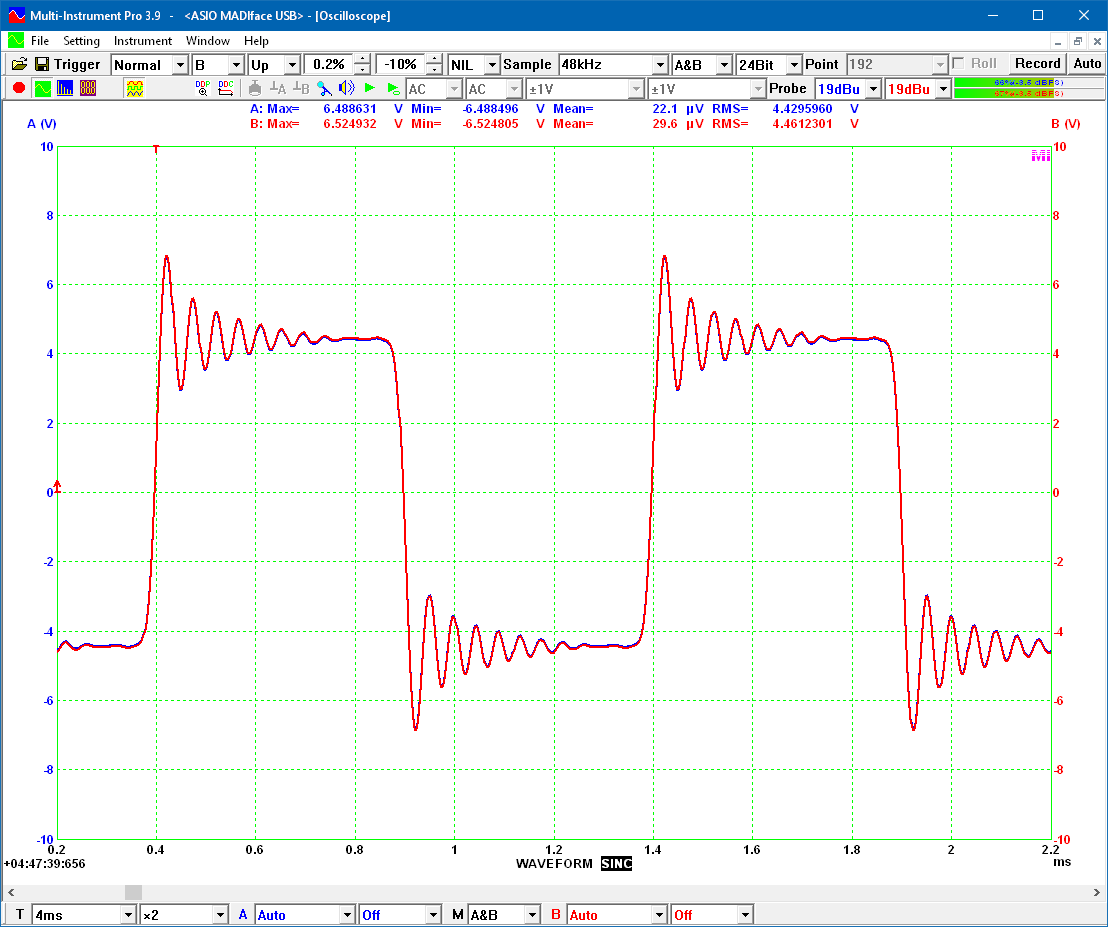 The DAC filter measurement is highly overloaded, which causes the out-of-band noise to rise (attenuation too low). Correct one should look like this. 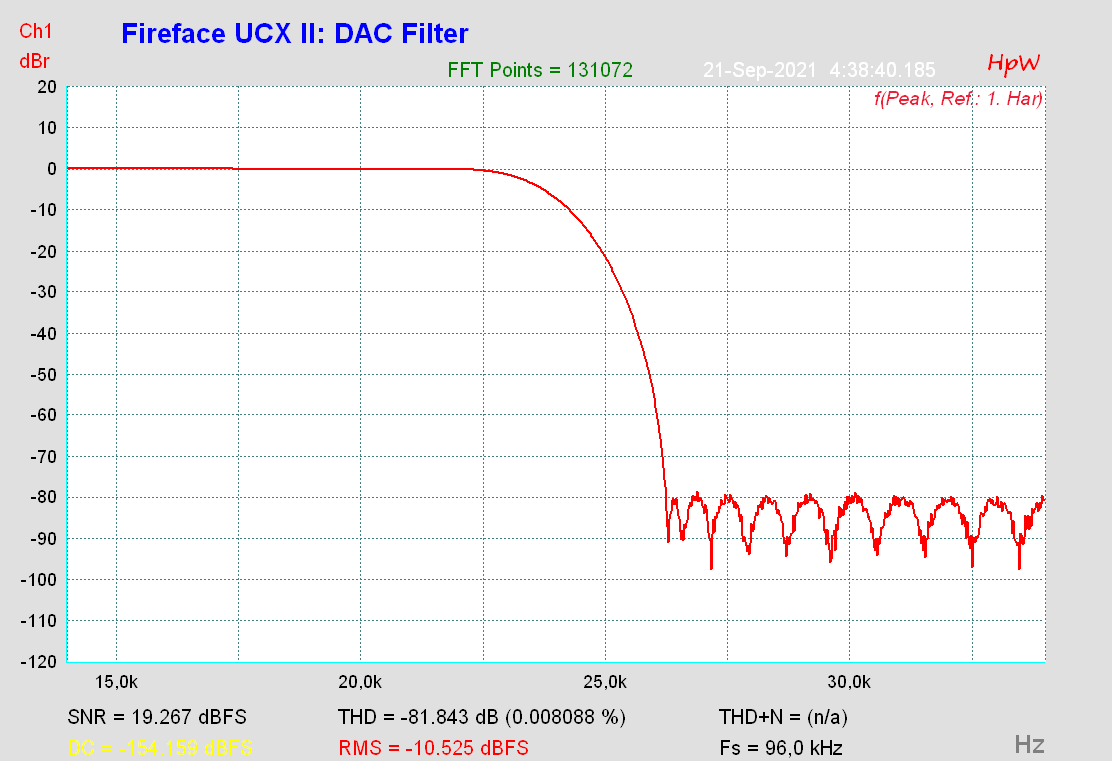 MC_RME said:
Square wave 1 kHz from MI into DSO of MI, UCX II and ADI-2 Pro at 44.1 kHz, rest as explained above. For me it was enough to reduce the output by 1.7 dB in TM FX to get an unclipped ringing square.
Click to expand...

I'll do it again.

Anyway, I'll change text.
Since, if I'm not mistaken, what we see here is that the UCX II is actually able to output a peak voltage above its maximum range of 19dBu.
That's what I was trying to measure, by the way.
OP
R

MC_RME said:
The DAC filter measurement is highly overloaded, which causes the out-of-band noise to rise (attenuation too low). Correct one should look like this.

Anyway, I'll change text.
Since, if I'm not mistaken, what we see here is that the UCX II is actually able to output a peak voltage above its maximum range of 19dBu.
That's what I was trying to measure, by the way.
Click to expand...

For that I play back a 11.025 kHz sine* sampled at 45°, which gives exactly +3.01 dBFS. You can easily use any volume control (also TM FX) to reduce it in level and find out exactly what is possible or not. And to check such + dBFS levels you need a level meter with oversampling - included in DigiCheck.
*Became popular when TC Electronics employees researched intersample peaks of CD players many years ago.
OP
R

MC_RME said:
The DAC filter measurement is highly overloaded, which causes the out-of-band noise to rise (attenuation too low). Correct one should look like this.

I did re-mesure the filter and you're right. Mine was wrong.
Corrected now.

Rja4000 said:
I did re-mesure the filter and you're right. Mine was wrong.
Corrected now.
Click to expand...

What objectivists really want from RME: Sorry, couldn't resist. And sorry for the awful photoshop. And make pretend the lower Pro is the DAC! 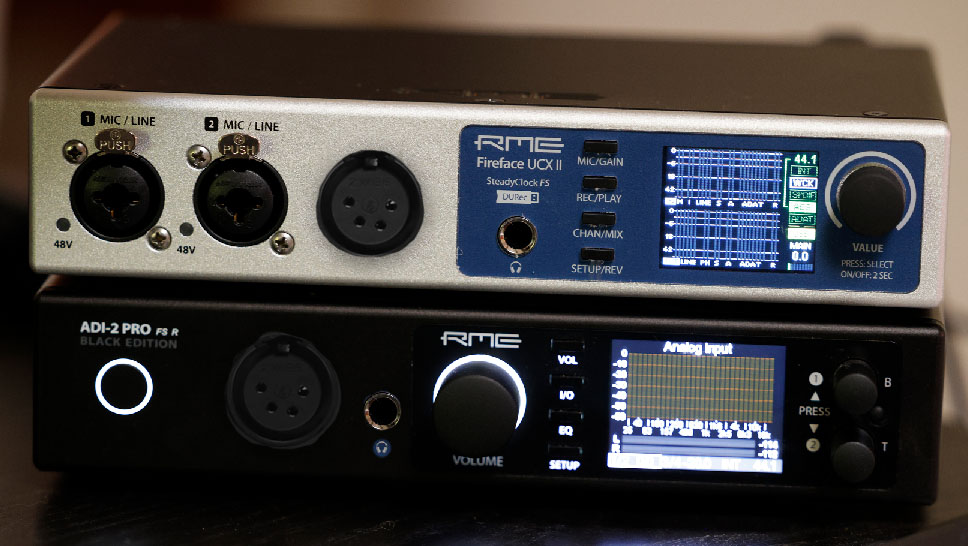 I've been using noise at -4 dbFS. I saw that first in the Stereophile testing and messing around with it just found you rarely overload if you do that. If you run noise long enough however you may need to use -10 dbFS. For short bits of test noise -4 dbFS is pretty good.
OP
R

I've re-done my square wave measurements and here is what I get. 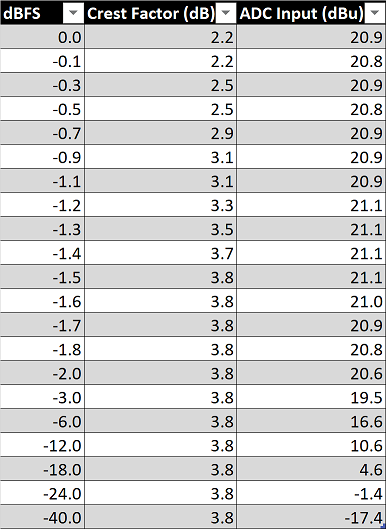 So truncation is gone at -1.5dBFS, indeed 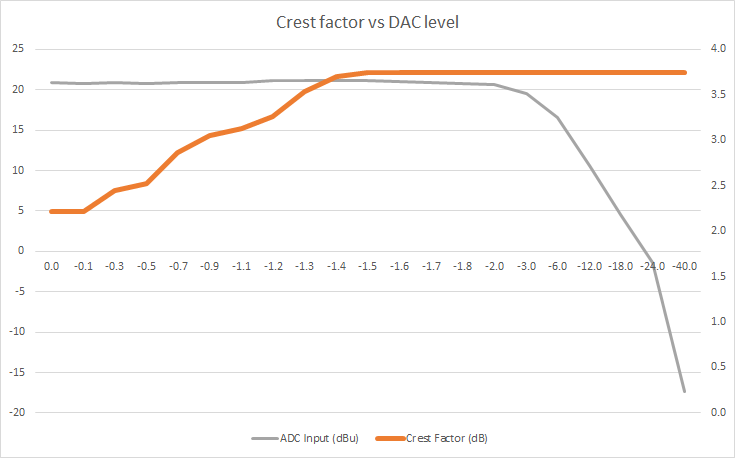 Thanks for the tips:
I'll try your way. I like the promise of an increase in productivity.
Last edited: Sep 21, 2021
OP
R

Tks said:
What objectivists really want from RME: Sorry, couldn't resist. And sorry for the awful photoshop. And make pretend the lower Pro is the DAC!

With the ADI-2 Pro, you just need a cable to get balanced phones out.
There is so much power at the tap that I don't really feel the need, anyway, but...

Rja4000 said:
With the ADI-2 Pro, you just need a cable to get balanced phones out.
There is so much power at the tap that I don't really feel the need, anyway, but...
Click to expand...

I know professionals like using these TRS type connectors for balanced duties, but the whole reason I like XLR is due to the solid connection, and how the pins instantly contact. Otherwise I get buzzing or slight distortion as I'm inserting otherwise unbalanced connectors like 3.5 or quarter inch connectors if my device is powered on. XLR from a usage standpoint to me is just so much better personally speaking. I don't want a balanced cable for headphones where I have to insert into two seperate jacks. Just straight up annoying.

But what I was hinting at, is I'd like a balanced headphone-out on the DAC while being served through a 4-pin XLR single connection (seeing as how it's a balanced DAC anyway). And since it's a home use device, there's no need to cater to studio/pro scene that uses quarter jacks for everything.
OP
R

Here is how it compares
The Black line is the new THD vs Frequency with 90kHz bandwidth
The blue dashed line is THD with Bandwidth limited to 20kHz
The Purple dashed line is my original measurement, with no limit to the number of harmonics. 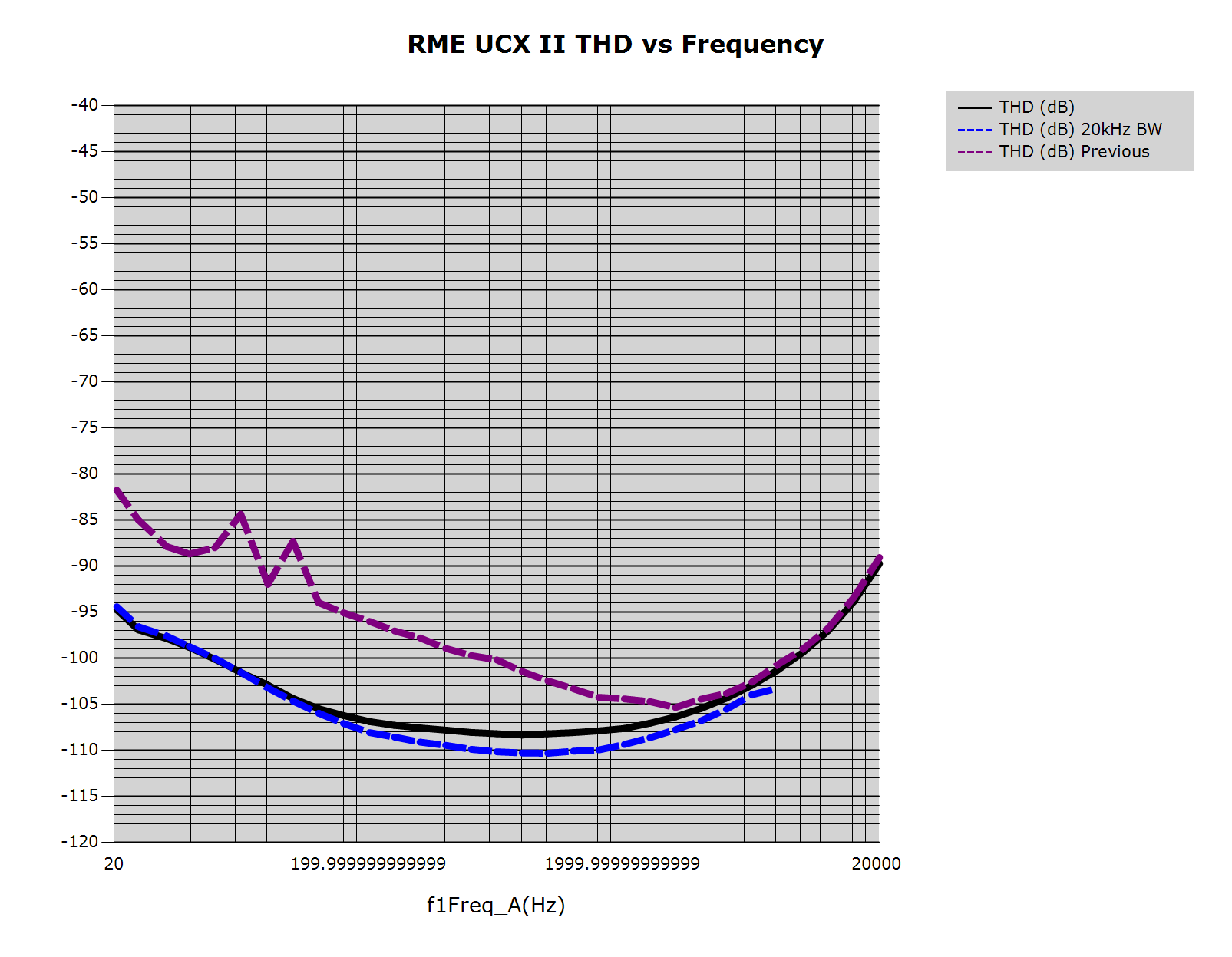 I prepared some kind of "Dashboard"

What is the dOO dAD doomaflooper on the back for? 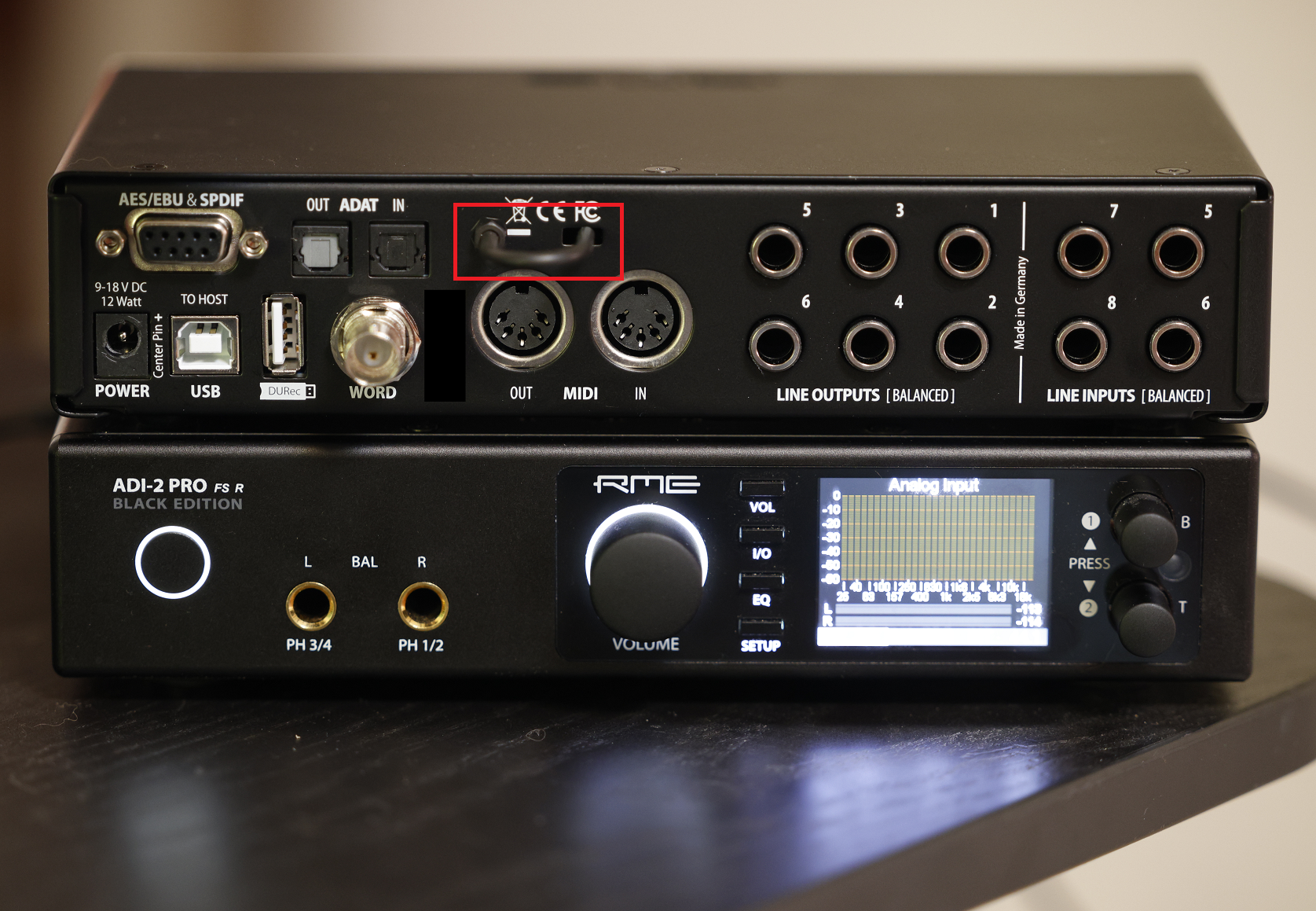 Doodski said:
What is the dOO dAD doomaflooper on the back for?
View attachment 154831
Click to expand...

Doodski said:
What is the dOO dAD doomaflooper on the back for?
View attachment 154831
Click to expand...

Yep. Cables that can easily slide out are fed through the hook and will be super stable in their sockets. Here mostly applies to optical and MIDI, but could also be useful for USB B and USB A.
Last edited: Sep 23, 2021
You must log in or register to reply here.

K
Does slaving a DAC unit to an Audio Interface make the quality worse?