You are, of course, correct and I was out in space... I'll blame it on hypocaffeination
I guess a 6922 can do less harm as a buffer than they do in, say, a phono preamp/EQ

mhardy6647 said:
You are, of course, correct and I was out in space... I'll blame it on hypocaffeination
I guess a 6922 can do less harm as a buffer than they do in, say, a phono preamp/EQ
Click to expand...

They do well there, too. Both of my published phono preamp designs use that family of tubes, and I’ll modestly claim that they are very high performance.
“"If I have been able to see further, it is because I have been surrounded by midgets"
- Murray Gell-Man

Best coffee on the planet
L

Billy Budapest said:
No. Tubes were out in the 80’s. From the late 60’s onward, solid state dominated hi-if. It’s more like a yearning to create the 50’s-60’s sound.
Click to expand...

Any engineered good quality tube Hi-Fi amp from the late 1950's on is audibly transparent and has no "sound".

SIY said:
They do well there, too. Both of my published phono preamp designs use that family of tubes, and I’ll modestly claim that they are very high performance.
Click to expand...

Maybe it's just the one here that's a dud
Actually, it is OK, but not enough gain for my needs -- and, I guess, my beef with 6DJ8 and kin is that there are so many of them (at least the ones I have) that are so microphonic.

Early in my career I had an interesting boss who would sometimes, for rhetorical effect, in response to a proposal for an oversimplification to a product spec, say that the simplest thing we could build is a 0 dB amplifier. It was a way of shutting down a stupid branch of conversation.

And now, all these years later, I see the subject of conversation is a device that appears to have, as its top line spec, that is exactly that, a 0 dB amplifier. But this particular can of emptiness 1) has bad performance, i.e. does nothing badly, 2) costs a lot, 3) wastes a lot of energy and materials doing it.

It's as though it were an imaginary device someone dreamed up for a philosophical thought experiment. But it's not. It exists in a really-existing economy so we have to explain its existence.

I can't help feeling that we are approaching the null-point of conspicuous consumerism, radical individualism and custom engineering.

"That 80s sound" was that of the Roland JC120, a proudly solid state amp, and very successful. Still popular today.

mhardy6647 said:
Maybe it's just the one here that's a dud
Actually, it is OK, but not enough gain for my needs -- and, I guess, my beef with 6DJ8 and kin is that there are so many of them (at least the ones I have) that are so microphonic.

Most issues with microphonics in those tubes is from oscillation. Use a good grid stopper tight by the pins and, for a cathode follower, a cathode stopper at the output, and the microphonics will almost always go away.

6SL7 types (I have a significant stash of 5691 and 6SU7s) are a very good high mu tube, very linear, but have very high input capacitance and a high plate resistance, which will need buffering for optimal performance.
“"If I have been able to see further, it is because I have been surrounded by midgets"
- Murray Gell-Man

Best coffee on the planet
T

thefsb said:
It was a way of shutting down a stupid branch of conversation.
Click to expand...

I bet they were great to work for.
P

Francis Vaughan said:
No surprises with the tube rolling. Whereas the CV2493 and 6922 are basically the same tube, they are not the same as a 6H30. Different gain, anode resistance for a start. A circuit designed for one is quite likely to behave differently with another. It isn’t anything to do with the intrinsic quality of the tube, just a matter of inappropriate use. It is remarkable how may tube enthusiasts miss this. Such is life.
Used as provided this buffer probably can successfully be used to add a little sparkle into the sound. At just the right drive level it will sit anonymously until a peak hits it that it can morph into something that sounds loud and dynamic. Not quite an Aphex Aural Exciter, but not a million miles away either.
Click to expand...

It's not marketed as an FX unit tough.
S

AndreaT said:
Maybe I am missing something: with no gain and no function knob, what is the purpose of this box? Impedance matching? Or rather distortion generator?
Click to expand...

What I don't get is the lack of control. For less money you could buy two highly controllable distortion devices (maybe configure them differently to get the channel imbalance you like).

Even at the silly-expensive, boutique end of the market, e.g. Origin Effects RevivalDrive with 15 control knobs per channel to allow you to shape the sound, the total cost would be less than this thing. 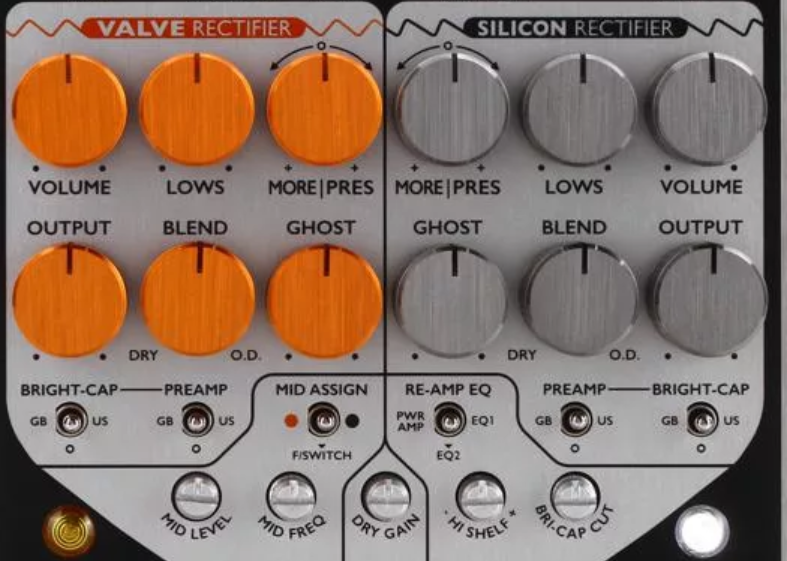 PeteL said:
It's not marketed as an FX unit tough.
Click to expand...

True, but the spiel is not far off.

I'll give them some credit here, they are not spouting audiophool woo. A buyer can hardly say they are not getting what they paid for.

This is a device I would be quite interested to have Amir have a listen and a general play with. It doesn't pretend to be accurate, and some passably dispassionate thoughts on it would be interesting.
The night is coming, and its filled with dark surprise.

mhardy6647 said:
Maybe it's just the one here that's a dud
Actually, it is OK, but not enough gain for my needs -- and, I guess, my beef with 6DJ8 and kin is that there are so many of them (at least the ones I have) that are so microphonic.

I had the same experience with numerous 6dj8s. This was 25 years ago.

Awww, I was waiting for the multitone test to get to the real fun part.
Suckless music player: https://git.sr.ht/~q3cpma/mus

If i would have 1600 bucks to throw out of the window, i would prefer to throw them out of the window. At least if you think about empire state or something like this. One day fun, much better than no fun with this thing.

Tortuga Audio, isn't that the company that several years ago promoted LDR passive stuff?
That is seriously bad tube "buffer". I am not a big fan of tube preamps or tube buffers of any sort (with gain or without). I my memory when CD player or DAC had solid state and tube buffer output I always prefered solid state. I used to own sonic frontiers preamp that I liked, but it was over 2 decades ago. But I understand that some audiophiles want to "enrich" the sound of class D amps with crap like this buffer. Wrong way. This one with it's price tag is shameless ripoff, for 1/2 price one can have exellent preamplifier as Topping Pre90.
Raspberry Pi-4B with Volumio upsampling to 32 bit/352.8 kHz ->USB out -> Uptone USPCB A>B filtering adapter -> USB in -> Topping D70s mqa -> Topping Pre90 - > Triode 845 monoblocks (20W class A) -> my design DIY speakers (93 dB)
H

Amir, there must be a typo in your review. Obviously it is not Tortuga TPB.V1, but Torture TPB.V1
M

I thank my lucky stars I had the sense to know any gear I have w/a balanced out didn't ever need a balanced buffer before the balanced in of what I was driving. Tho I never would have paid the asking price anyway.

One of the reasons that tube swapping is a "thing" is that there are clearly audible differences between tubes. It's one of the aspects of the hobby where the hobbyist has some sense of control over the sound.

Some 30 years ago, I lived in Berkeley California, walking distance from an electronics shop that sold tubes, had a tube tester and a big NOS stock of tubes. I'd swap out tubes for my Stax Amp/Energizer [hybrid: J-Fets driving Triodes], later for an Ampex MX-10, [all-tube, ancient and very funky], Marantz 8B [glorious mid-range at the expense of everything else], and a 'starved tube' microphone preamp [another hybrid, op-amps driving the tubes, if I'm not mistaken]. Compared to the exclusively solid-state gear, the upper octaves of tube hybrid gear sounded more "rounded off" and there was a bit of soft clipping on peaks. A lot less 'grain'. The systems I'm using now, while extended as far as I can hear in the upper register, have few upper register resonances or audible hot spots. The Stax earspeakers were peaky on top, producing good "presence" and spatial effects. So were the speakers I was using for monitoring, little NHT bookshelf speakers. The Drop 6XX 'phones and the a/d/s 400 speakers in use now are as smooth as silk, driven by solid state gear.

The biggest difference with tube-swapping was in the upper registers. I'd use a Rat Shack tone generator connected to the inputs of the tube gear, connect the output to a cassette deck and look for differences in level. Also did this with various interconnects. There was a 5 db difference at 10K swapping out line level interconnects on the MX-10. The interconnects I made without shielding had the most treble, some old, thick Monster Cable stuff that was overloaded with di-electric had the least. I asked Jack Vad what was going on, he said "Send me a schematic". After looking at it, he called back, said "There's no cathode follower." I know what a cathode follower is now, didn't know then. This issue didn't happen with any of the other gear.

This all points to some of the more "Audiophilus Nervosa" aspects of the hobby. ASR would say tube gear has obvious, bad, distortions. I'm sure SET gear has oodles of distortion. I'm sure the kind of loudspeakers favored by SET enthusiasts have wonky frequency response. The sum total must be full of mismatched impedances and easily measured distortions. But all these "broken" aspects of design can be fiddled with endlessly until the golden-eared audiophile gets the sound he deserves for a price he really can't afford.
Last edited: Jul 12, 2021
I can't even remember what it was I came here to get away from

Correct, it's late 1950's/early 1960's that tubeophiles seek. More like Roy Orbison, less like Wang Chung.
I can't even remember what it was I came here to get away from
You must log in or register to reply here.