Copy/paste from my site. Review may not translate from my site so here is the link to the full review on my site:
https://www.erinsaudiocorner.com/loudspeakers/kali_in-8v2/

Foreword / YouTube Video Review
The review on this website is a brief overview and summary of the objective performance of this speaker. It is not intended to be a deep dive. Moreso, this is information for those who prefer “just the facts” and prefer to have the data without the filler.
Note: Coming Soon

For a primer on what the data means, please watch my series of videos where I provide in-depth discussion and examples of how to read the graphics presented hereon.
https://youtube.com/playlist?list=PLnIxFR_ey0b37Ex4KV2mBz-kYB7QLffR1

The Kali IN-8v2 is the second generation powered 3-way Studio Monitor featuring a 4-inch coaxial midrange/tweeter and an 8-inch midwoofer.
MSRP for the single speaker is approximately $399 USD and $800 USD for a pair.

The back features a bank of dip switches for boundary settings (discussed later) and basic level adjustments. There is a volume knob and (3) input options: XLR, TRS and RCA phono.

CTA-2034 (SPINORAMA) and Accompanying Data
All data collected using Klippel’s Near-Field Scanner. The Near-Field-Scanner 3D (NFS) offers a fully automated acoustic measurement of direct sound radiated from the source under test. The radiated sound is determined in any desired distance and angle in the 3D space outside the scanning surface. Directivity, sound power, SPL response and many more key figures are obtained for any kind of loudspeaker and audio system in near field applications (e.g. studio monitors, mobile devices) as well as far field applications (e.g. professional audio systems). Utilizing a minimum of measurement points, a comprehensive data set is generated containing the loudspeaker’s high resolution, free field sound radiation in the near and far field. For a detailed explanation of how the NFS works and the science behind it, please watch the below discussion with designer Christian Bellmann:


The reference plane in this test is at the tweeter. Volume set to ‘0’ with XLR input. The dip switches were all set to ‘0’ for the free field setting.

Measurements are provided in a format in accordance with the Standard Method of Measurement for In-Home Loudspeakers (ANSI/CTA-2034-A R-2020). For more information, please see this link.

“Globe” Plots
These plots are generated from exporting the Klippel data to text files. I then process that data with my own MATLAB script to provide what you see. These are not part of any software packages and are unique to my tests.
Horizontal Polar (Globe) Plot:
This represents the sound field at 2 meters - above 200Hz - per the legend in the upper left.

Vertical Polar (Globe) Plot:
This represents the sound field at 2 meters - above 200Hz - per the legend in the upper left.

Dynamic Range (Instantaneous Compression Test)
The below graphic indicates just how much SPL is lost (compression) or gained (enhancement; usually due to distortion) when the speaker is played at higher output volumes instantly via a 2.7 second logarithmic sine sweep referenced to 76dB at 1 meter. The signals are played consecutively without any additional stimulus applied. Then normalized against the 76dB result.
The tests are conducted in this fashion:
The purpose of this test is to illustrate how much (if at all) the output changes as a speaker’s components temperature increases (i.e., voice coils, crossover components) instantaneously.

Based on my results above, it is obvious the output is limited (via internal DSP) somewhere above the 96dB @ 1m output level.


Long Term Compression Tests
The below graphics indicate how much SPL is lost or gained in the long-term as a speaker plays at the same output level for 2 minutes, in intervals. Each graphic represents a different SPL: 86dB and 96dB both at 1 meter.
The purpose of this test is to illustrate how much (if at all) the output changes as a speaker’s components temperature increases (i.e., voice coils, crossover components).
The tests are conducted in this fashion:
The red and blue lines represent changes in the output compared to the initial “cold” test.

Boundary Settings
I tested this with the IN-5 and am providing it again here. I expect some bit of change from this model but likely not much (and possibly, not at all).
These speakers come with a set of pre-configured boundary settings that can be enabled easily via the dip switches on the back. Below is a close shot of the dip switches.

The dip switch combinations displayed above are labeled and plotted in the graphic below.

Parting / Random Thoughts
If you want to see the music I use for evaluating speakers subjectively, see my Spotify playlist.

These are excellent speakers on a whole, to my ears. They are, in my opinion, an excellent value at the MSRP of only $800/pair. It is a great mixing/monitoring speaker and would do well in home audio applications (but be mindful of the output as the linearity changes at high output levels thanks to the built-in limiter). Frankly, I don’t know how Kali is able to produce such a nice speaker for such a reasonable price. I have no problem recommending the Kali IN-8 Second Wave.

In case you are wondering, no, Kali did not send me these speakers to review. They came from a viewer.

Looks like a great speaker and an excellent value. Congrats, Kali! And thanks, Erin.
Amplifier SINAD list

Agreed. Exceptional value for a studio monitor. What the heck is that tweeter doin up at 10k on though? Having his own party, lucky its mostly likely inaudible.

Edit: Looks like a trait of the coaxial driver tweeter being in a little tunnel
M

Kali may market the IN-5 as a near-field monitor but they clearly state in the user's manual that the IN-8 is "ideal for near-to-mid-field applications":

The IN-5 and IN-8 are designed to have a continuous output of 85 dB at 2.2 and 3.5 meters, respectively, with 20 dB of dynamic headroom. This makes the IN-5 ideal for most near-field monitoring applications, and the IN-8 ideal for near-to-mid-field applications.

@hardisj, it isn't entirely clear from your review if you agree with or dispute Kali's claim that the IN-8 can produce continuous output of 85 dB with 20 dB of dynamic headroom (for 105 dB peaks) at up to 3.5 meters.
Last edited: Jun 28, 2021
N

Looks excellent! Thank you for your reviews @hardisj. Seems your'e a bit like me and sometimes review in batches?
OP

napilopez said:
Looks excellent! Thank you for your reviews @hardisj. Seems your'e a bit like me and sometimes review in batches?
Click to expand...
Kind of. I think it's more that I just sit down and write up the results in batches. I reviewed some of these speakers last week. Just trying to get the data out now.
https://www.erinsaudiocorner.com/
B 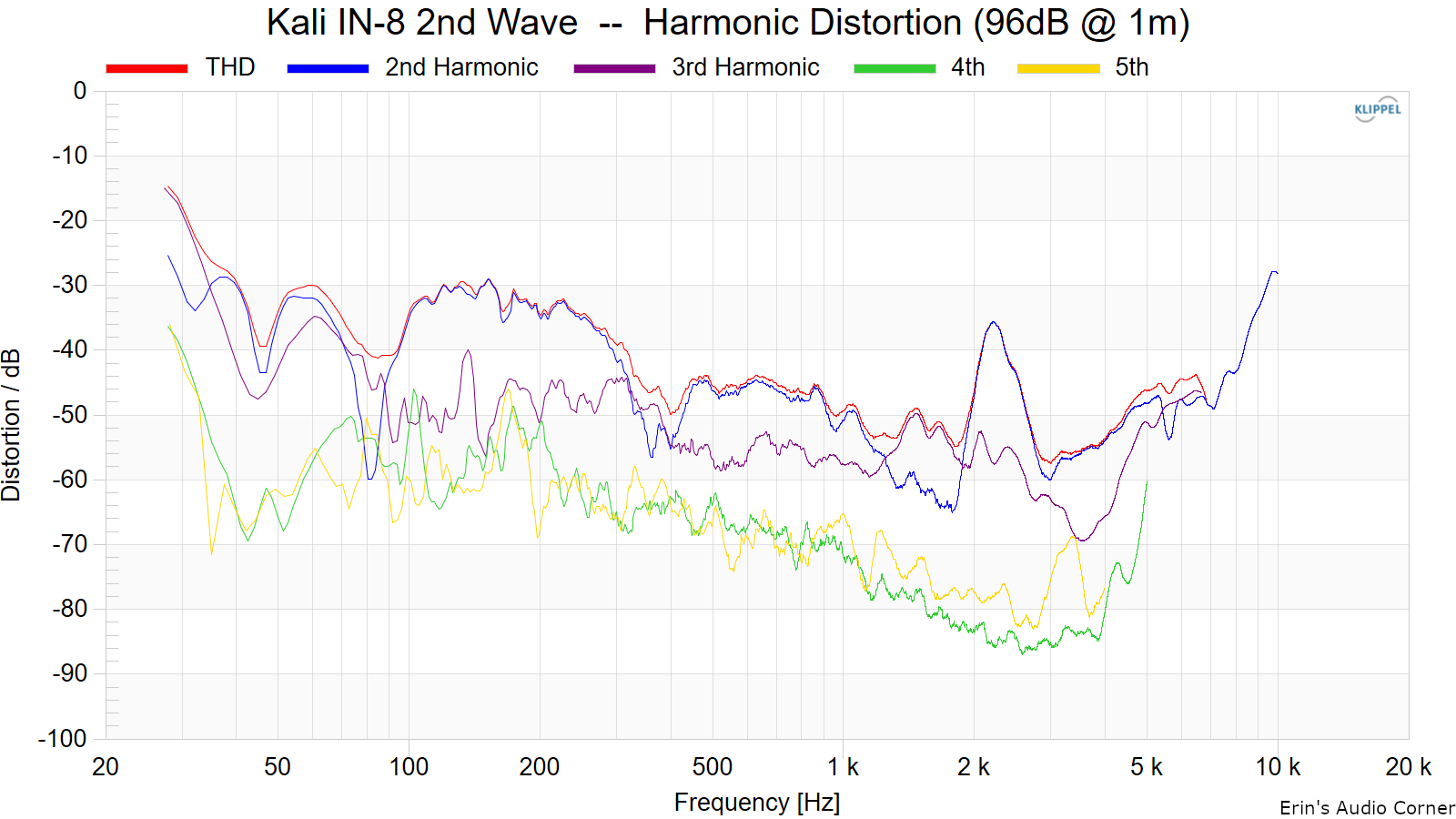 BrokenEnglishGuy said:
-40 is 1% and -50 is 10%? i still dont get how to read that xD
Click to expand...
http://www.sengpielaudio.com/calculator-thd.htm

Thanks for your review.
From your analysis, these are very respectable results at this price range, and really not too much to complain about in every aspect.
Truly a value leader.
The 160Hz artifact is interesting, could be an artifact from the new electronics?
P

Since the speaker is pretty good, EQ is not that useful. With the generated following EQ, score will for up to 6.0. EQ is mostly trying to fix small oscillations (High Q, low gain) that are not very audible and may change from one speaker to another. So I would advise no EQ for this one. 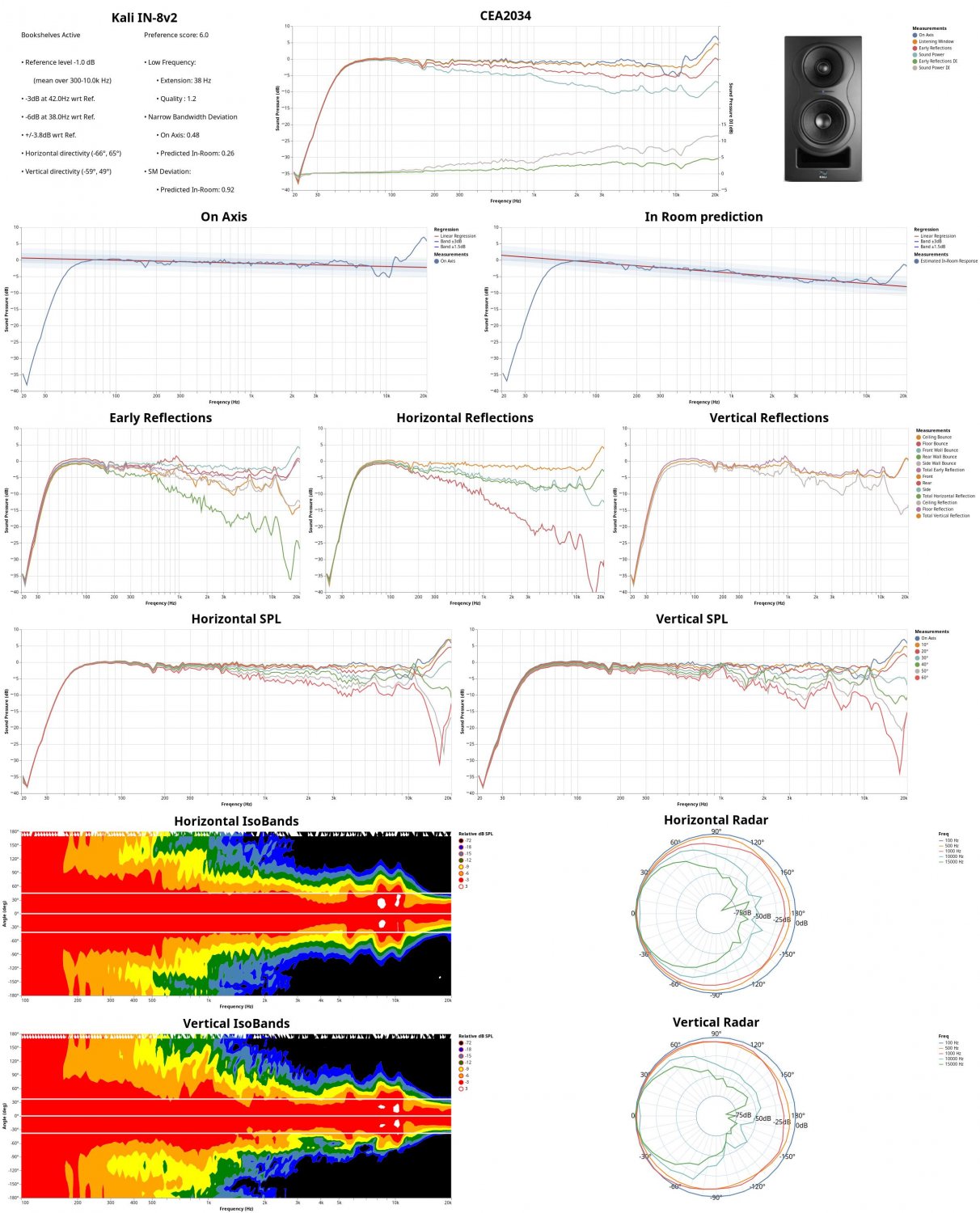 Much appreciated, thanks Erin.
So In8 has a slightly better pref score than In5?
AVI DM12 + AVI ADM10
QC35II
S

How easy is it to overlay the estimated in-room graphs of this, the IN-5 and the 8030C?
P

sharock said:
How easy is it to overlay the estimated in-room graphs of this, the IN-5 and the 8030C?
Click to expand...
Super easy Jump to https://pierreaubert.github.io/spinorama/compare.html (it is a bit slow to start) 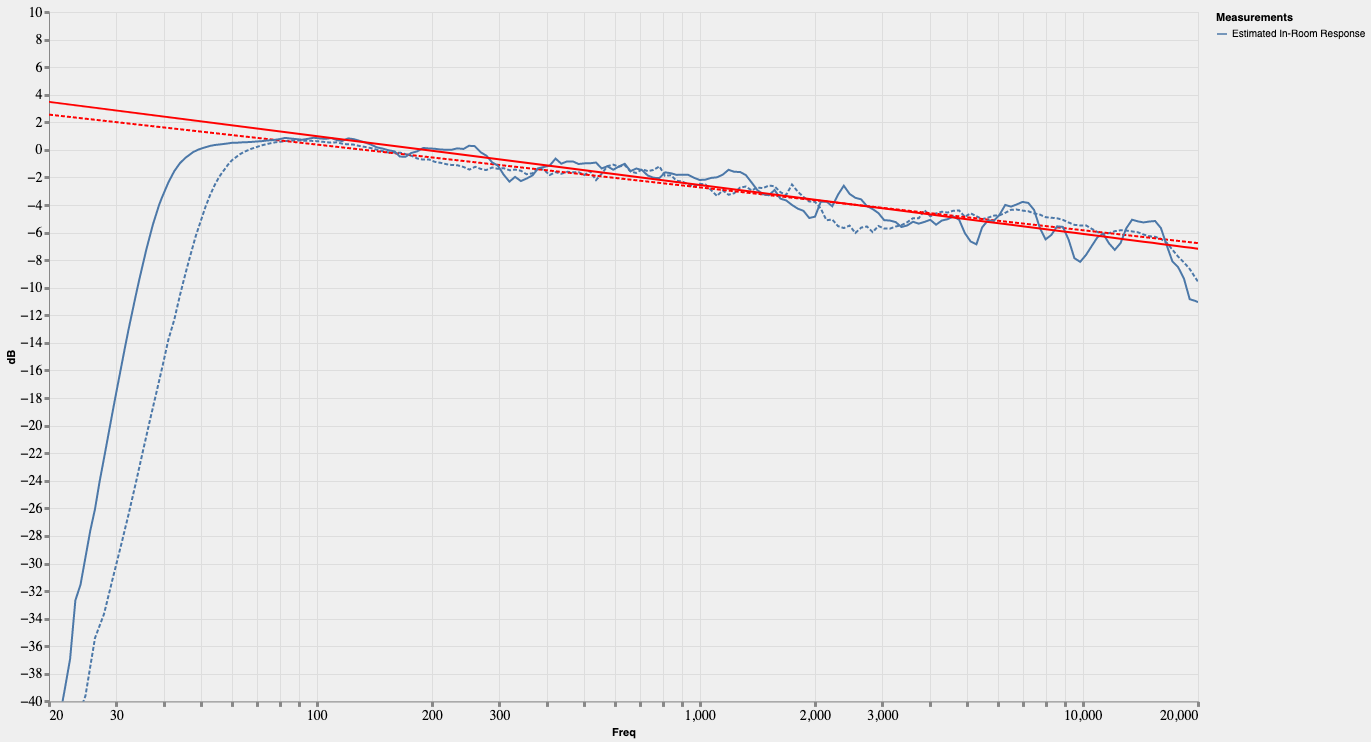 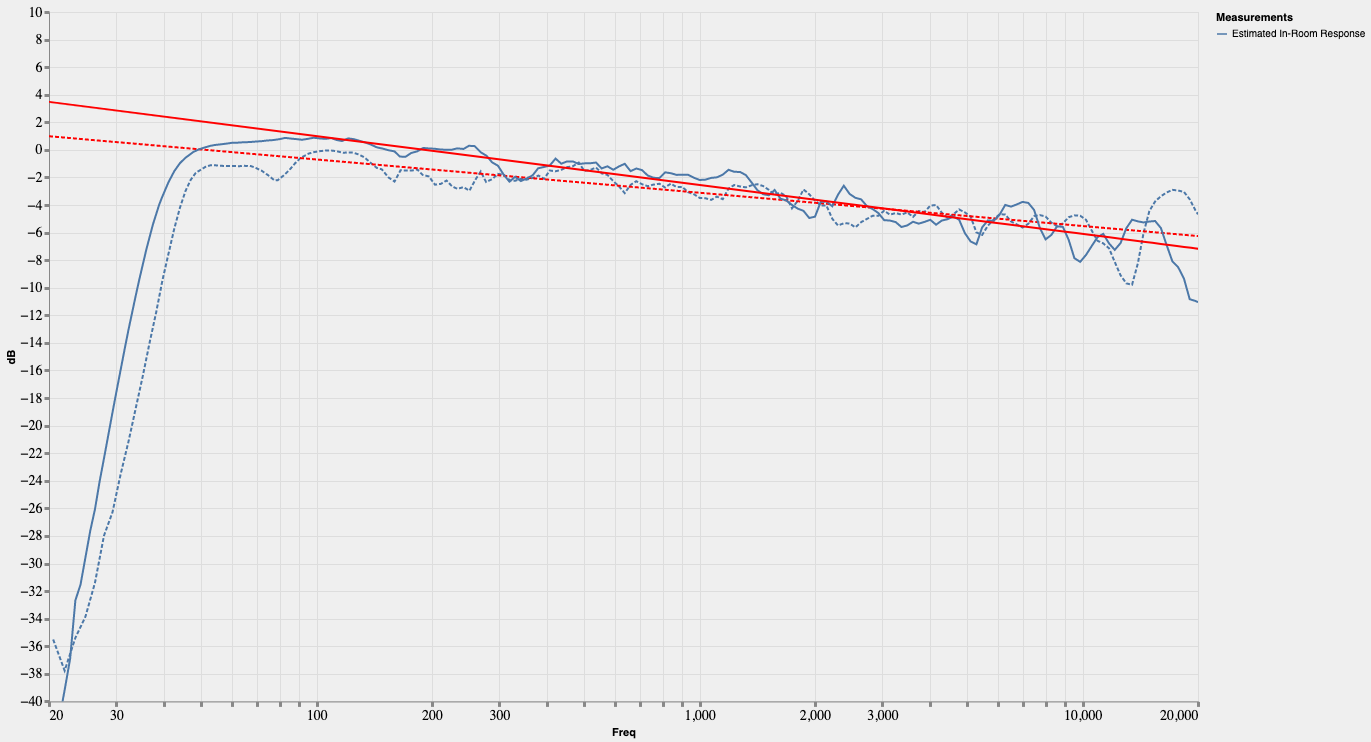 pierre said:
Super easy Jump to https://pierreaubert.github.io/spinorama/compare.html (it is a bit slow to start)
Click to expand...
Hero! Thanks.

Although I guess the IN-8 V2 is yet to be added?

Thanks a lot Erin! Two great reviews in a few hours.

This part is not good news:

Another area that occasionally stood out to me was in the 100-200Hz where some lower vocals tended to sound a bit “hot”. It was a rare occurrence but noticeable, nonetheless. I took the speaker back out to the garage and measured it for CSD (provided previously). The CSD indicates a lingering resonance at roughly 160Hz. It is interesting to note there is a dip in the SPINORAMA data at this frequency but yet a peak in the dynamic compression test. Hmph.
Click to expand...
OP

daftcombo said:
Thanks a lot Erin! Two great reviews in a few hours.
Click to expand...
Your welcome. FWIW, I actually posted (4) reviews. Bose Bluetooth speaker comparison, apple homepod mini, this one and the ELAC UBR62.


daftcombo said:
This part is not good news:
Click to expand...
It really isn't bad. I mean, out of a 10-scale of noticeability, for me it's like a 3. Which means for pretty much the rest of the world it would be a -5. Because, I swear, I always seem to hear these lower frequency resonances and people say "I don't hear it". *shrug*
https://www.erinsaudiocorner.com/

hardisj said:
It really isn't bad. I mean, out of a 10-scale of noticeability, for me it's like a 3. Which means for pretty much the rest of the world it would be a -5. Because, I swear, I always seem to hear these lower frequency resonances and people say "I don't hear it". *shrug*
Click to expand...
I sold my pair of 305p mkII after seing your review because, to me, there was a problem in the 100-200Hz area and you confirmed it.

So, I might be too sensible there too. And when you hear something, it is impossible to un-hear it.

Did you notice something similar with the IN-5?
OP

daftcombo said:
I sold my pair of 305p mkII after seing your review because, to me, there was a problem in the 100-200Hz area and you confirmed it.

So, I might be too sensible there too. And when you hear something, it is impossible to un-hear it.

The funny thing about hearing the resonance in this speaker was it was the last song I was shuffling through and I turned around to the computer right when I heard it. I thought "what was that", and listened to it again at that point. Heard it again. Went through a few more tracks to listen on purpose and only a couple showed it. I mean, it was really barely noticeable. But when I plotted the CSD I could see what I was hearing. I didn't try to EQ it... maybe you can. I would be surprised if more than 90% of listeners ever heard it. But like you said, once you do, it's impossible to ignore. Luckily it happens rarely. Nowhere near as bad as the JBL 305P mk2 did, so I can still recommend it. And I would still own the speaker if it were in my wheelhouse/need.
https://www.erinsaudiocorner.com/

Thanks for the review, this might be what finally pushes me purchase them. I've been eyeing them and the UBR62 for a while now - if only to test what coaxial speakers would sound like in my room and well, of the two this looks more attractive performance wise.

It's unfortunate that that they can't play louder, but perhaps when crossed to a sub the limited tweeter output isn't much of an issue in practice?
MPD → CamillaDSP → Okto Research dac8PRO → SVS PC-2000 ⇉ Hypex NC400 → Elac DBR-62 → ♫
You must log in or register to reply here.
Share: Facebook Google+ Reddit Pinterest Tumblr WhatsApp Email Link