This is a review and detailed measurements of the Hifiman HE-6 open-back, Planar Magnetic Headphone. It was kindly loaned to me by a member. There are different versions of this headphone in the wild. This is the "4-screw" version. The HE-6 has been discontinued. When available, it cost US $1,300.

The HE-6 has a serious look to it and beefy metal parts: 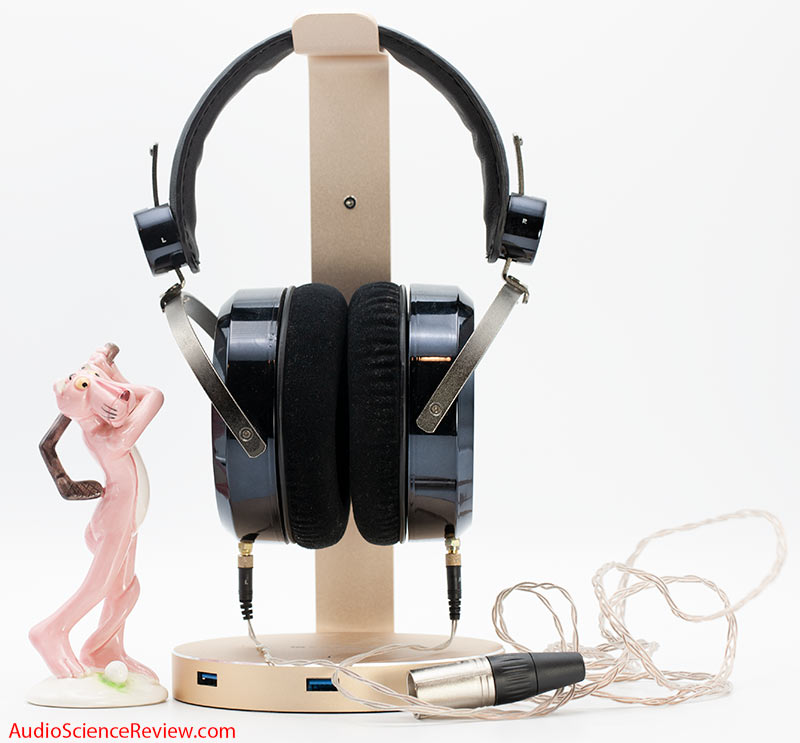 I think the wiring provided are aftermarket.

The large cups allowed it to instantly fit on my head with excellent comfort despite its above average weight.

Mounting the headphone on my test fixture was challenging, resulting in quite a lot of variation between channels and overall response. I optimized this as best as I could but like there are some error in low frequencies.

Hifiman HE-6 Measurements
Before I show the measurement let me state that this was the easiest headphone to measure by far. I just put it on my test rig and it instantly registered equal levels in both cups. And furthermore, the level barely changed when I switched to a low frequency of 80 Hz. It was a joy in this regard!

Let's start with frequency response of HE-6 and comparison to our preference target to figure out tonality of the headphone: 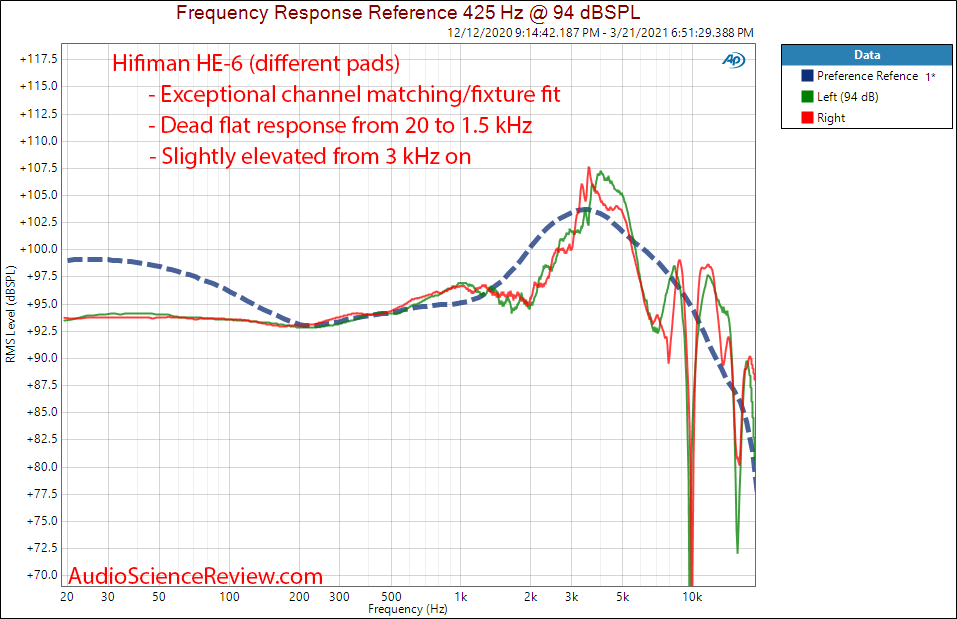 Now you see what I meant by ease of measurements. See how the response is ruler flat and matching in both cups from 20 Hz to almost 1.5 kHz! I have never seen such precision before. Yes, our preferred response asks for more bass but this is a great baseline to have instead of drooping, or jagged response. Someone had a target of flat response there and got it! Beyond 1 kHz, we have some shortfall from target followed by excessive peaking and exaggerated highs. Neither is very extreme though: 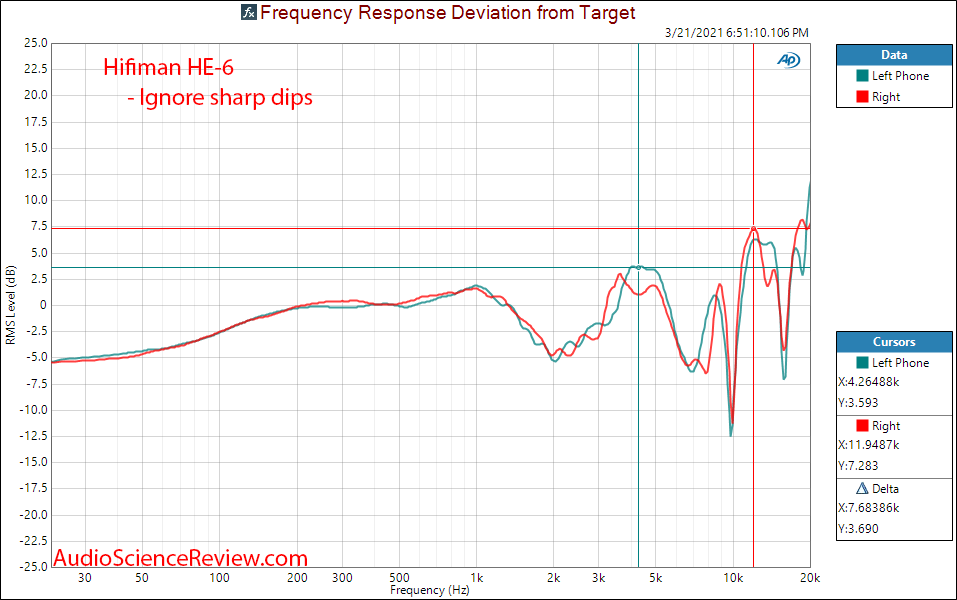 Check out the distortion levels: 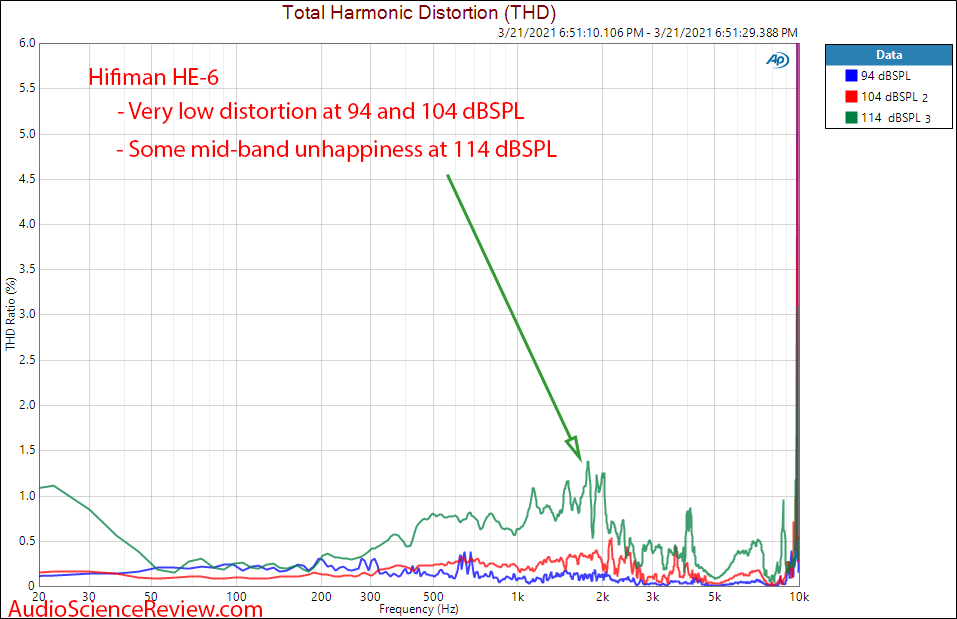 At 94 and 104 dB, there is essentially no distortion from 20 Hz to 10 kHz! 114 dBSPL brings out some unhappiness between 1 and 2 kHz. We can see that there must be multiple sound sources from the group delay: 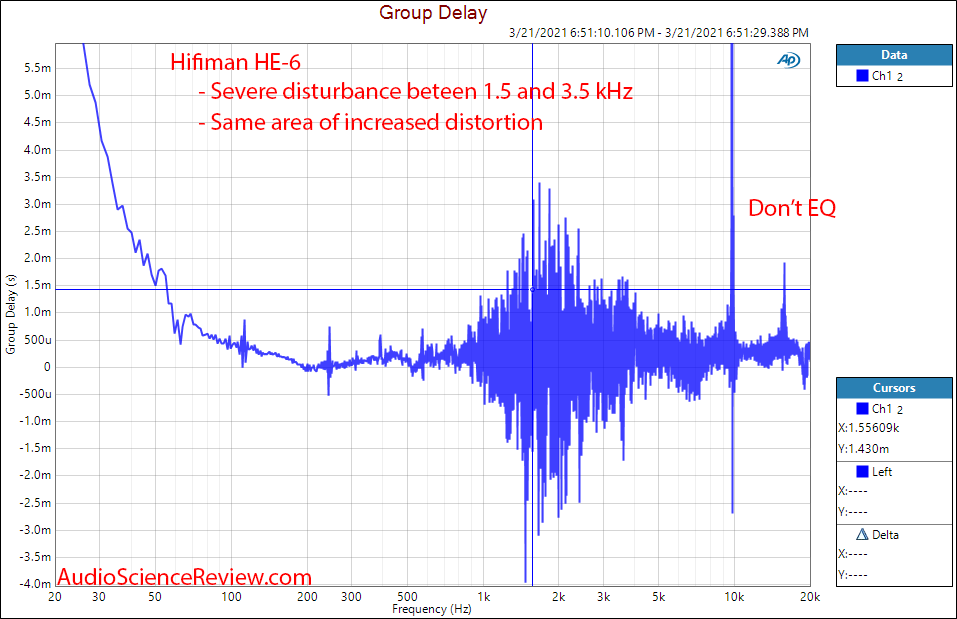 Low frequency response though is textbook accurate with that sloping down graph. Again, I don't recall seeing another headphone that clean in that region.

Back to distortion, the HE-6 passes my 40 dBSPL threshold with flying colors: 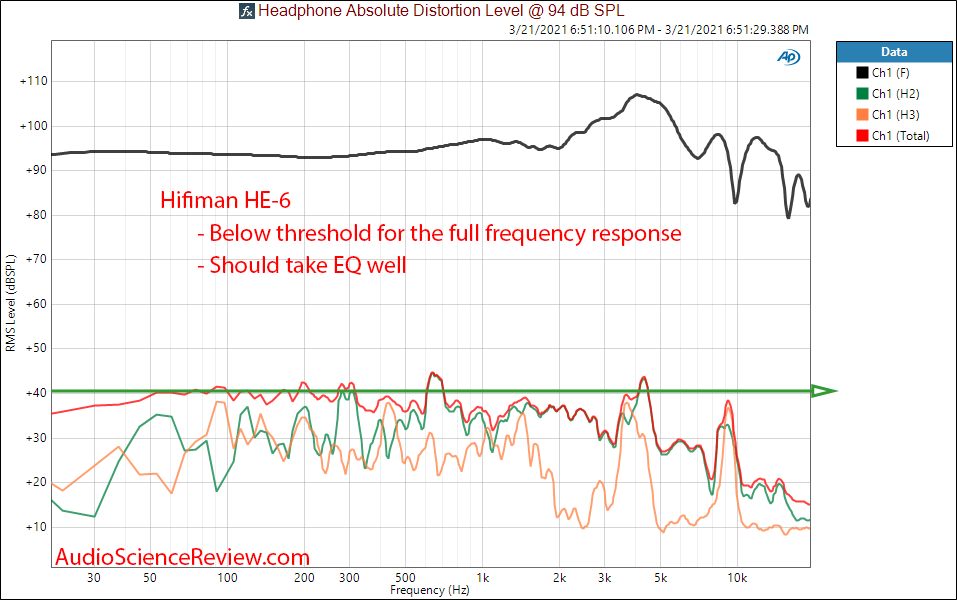 The HE-6 has a reputation for being very inefficient, needing ton of power and we can see that in my testing: 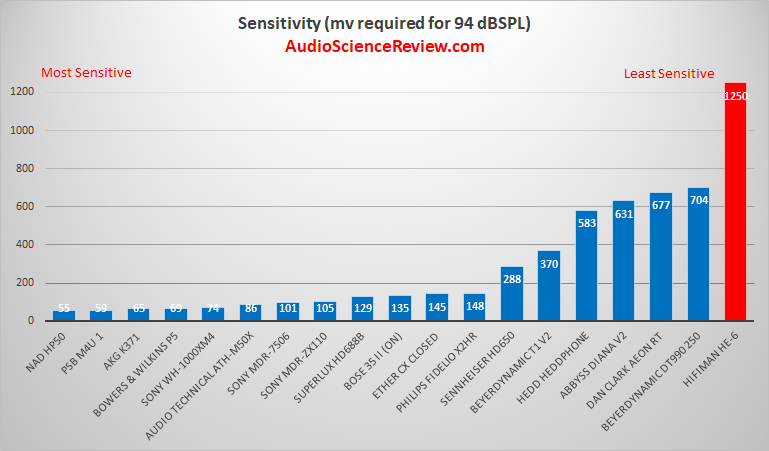 It is in a class by itself there.

Typical of planar magnetic transducers, impedance is flat and low: 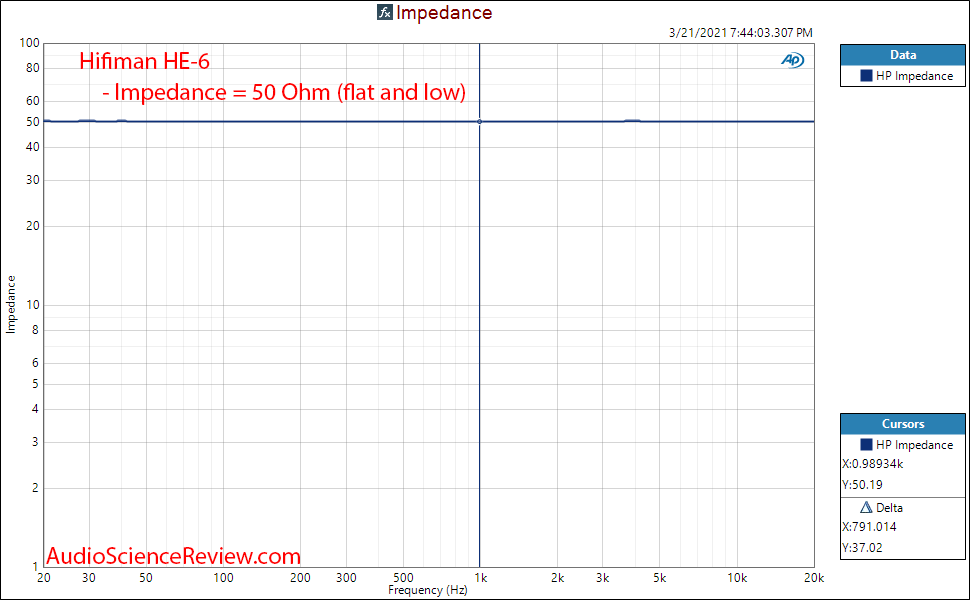 Hifiman HE-6 Listening Tests
I remember testing the HE-6 a couple of weeks ago for another purpose and saying, "hey, this is not bad!" Same impression held this time around. The sound is very clean with just a bit of high frequency exaggeration. What bass there is, is good enough baseline that you could live with. Still, I went after its response to matching to our preference better and the sound improved by a good notch or two: 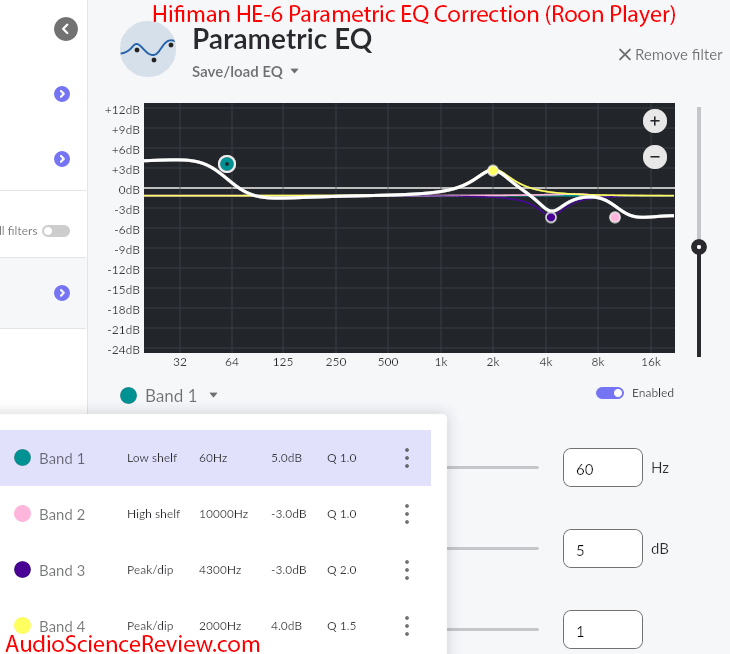 I arbitrary dialed in that sub-bass EQ. It worked well enough to bring out that region without changing the overall impression of bass or making the headphone boomy. I put in a shelving filter to pull the highs down and that worked well. I think brought down the resonance around 4.3 kHz and compensated with pulling up the 2 kHz.

Once there, the transformation was impressive. Spatial effects were reasonable before but now were incredibly satisfying. It felt like you had your head inside a medium sized dull house with an orchestra playing! I wish I still had the Sennheiser HD800S with me to compare. From memory though, I think the HE-6 is close if not the same as its magical response in this regard. I am assuming the large cups and spacing from the ear is responsible for this open sound.

With equalization, I really had no other wishes for this headphone. It was comfortable and produced incredible fidelity. Everything was there from clean bass to detail and resolution. And oh, I was driving it with Topping A90 which could drive it quite loud on high gain. I also tested it on RME ADI-2 DAC V2 and it too managed to drive it. So no, you don't need a power (speaker) amplifier to drive it. High performance amplifiers I have been recommending can mange it.

I liked the sound of HE-6 so much that while working on the review, I was playing my selection of music with it and constantly saying, "wow, that sounds good!"

Conclusions
It is a shame this headphone is discontinued and was expensive to boot. Objectively the performance is quite good with distortion being a stand-out in addition to good amount of bass out of box. With four filters, the sound is transformed not only tonally, but also from imagine/spatial qualities, differentiating from other headphones.

I am going to put the HE-6 four-screw version on my recommended list. With EQ, it lands in my "highly recommended" bucket. Will be sad to let this go.

FYI, I have asked the owner to chime in and explain exactly what it is that I tested. He also lent me some other mods but I have not tried to assess them.

Thanks @amirm for measuring my HE-6! Believe it or not you actually tested a completely stock HE-6 with the stock cabling.

I did include some reversible mods (pads, microfiber, etc.), that were not applied, with the headphone in case you did want to try them out. They were put together by another modder of headphones to take a little bit off of the treble, as I have some sensitivity to it. In all honesty, I should probably just use equalization instead as you have shown it to work just as well, if not better, than physical mods! I also included an aftermarket adapter for banana plug connections in order to hook them up to a speaker amplifier if you wanted to go down that rabbit hole. As you've shown in your review though, some of the newer higher power headphone amplifiers, which didn't exist at the time that these headphones were released, are now capable of providing them with adequate power. I've used them with lower power speaker amplifiers as well as with the Schiit Magnius in High Gain balanced output without any issues.
Last edited: Mar 23, 2021

Shazb0t said:
Thanks @amirm for my HE-6. Believe it or not you actually tested a completely stock HE-6 with the stock cabling
Click to expand...

My pleasure. Thanks for clarifying that. I changed the review to reflect this.
Amir
Founder, Audio Science Review
Founder, Madrona Digital
Review Thread Rules
My Technical Background
My YouTube Channel

@amirm , any chance you might be measuring the HE6se in the near future?
Lost In The Wheels Of Confusion

@amirm , can you throw these on the scale and see how much they weigh in grams without cables? I'd like to see which manufacturers are fudging their numbers.
SMSL M300 MKII+A90+HD800S/HD6XX/Aeon2 Open
Vanatoo t0
OP

frogmeat69 said:
@amirm , any chance you might be measuring the HE6se in the near future?
Click to expand...

@amirm I am interested what your son would think about bass on those without EQ. Call it curiosity if you wish.
OP

Racheski said:
@amirm , can you throw these on the scale and see how much they weigh in grams without cables? I'd like to see which manufacturers are fudging their numbers.
Click to expand...

Sure. It is 545 grams. Spec is 502 grams. I left the cables connected but held the cable in my hand. So maybe it is a few grams lighter without the cable.
Amir
Founder, Audio Science Review
Founder, Madrona Digital
Review Thread Rules
My Technical Background
My YouTube Channel
OP

ZolaIII said:
@amirm I am interested what your son would think about bass on those without EQ. Call it curiosity if you wish.
Click to expand...

I actually had him listen. He said that my EQ definitely got rid of the elevated highs and slightly increased the bass. Overall, he liked the EQ.
Amir
Founder, Audio Science Review
Founder, Madrona Digital
Review Thread Rules
My Technical Background
My YouTube Channel

@amirm on the group delay graph there's the caption that says "Don't EQ" Is that just referring to that last little spike between 10khz and 20khz?

vs. 'ever popular' single-sided Sundara?

cursive said:
@amirm on the group delay graph there's the caption that says "Don't EQ" Is that just referring to that last little spike between 10khz and 20khz?
Click to expand...

I have Ananda and Sundara so will be testing those soon.
Amir
Founder, Audio Science Review
Founder, Madrona Digital
Review Thread Rules
My Technical Background
My YouTube Channel
Y

Hi Amirm, really what the headphone I was hoping to own one day back before I get the Genelecs. I was enjoying the HE-500 which was claimed to be the baby HE-6 during the ear which is also still my only pair of headphone till now with some wear on the hinges and headband.

Would you be interested to measure the HE-500 sometime later? I rarely use it so can afford to DHL it to you for a year or so.

frogmeat69 said:
@amirm , any chance you might be measuring the HE6se in the near future?
Click to expand...

Also the Susvara, which is comes from the same heritage as the HE6. One of the only other HIFIMAN headphones to feature double-sided symmetric magnets. 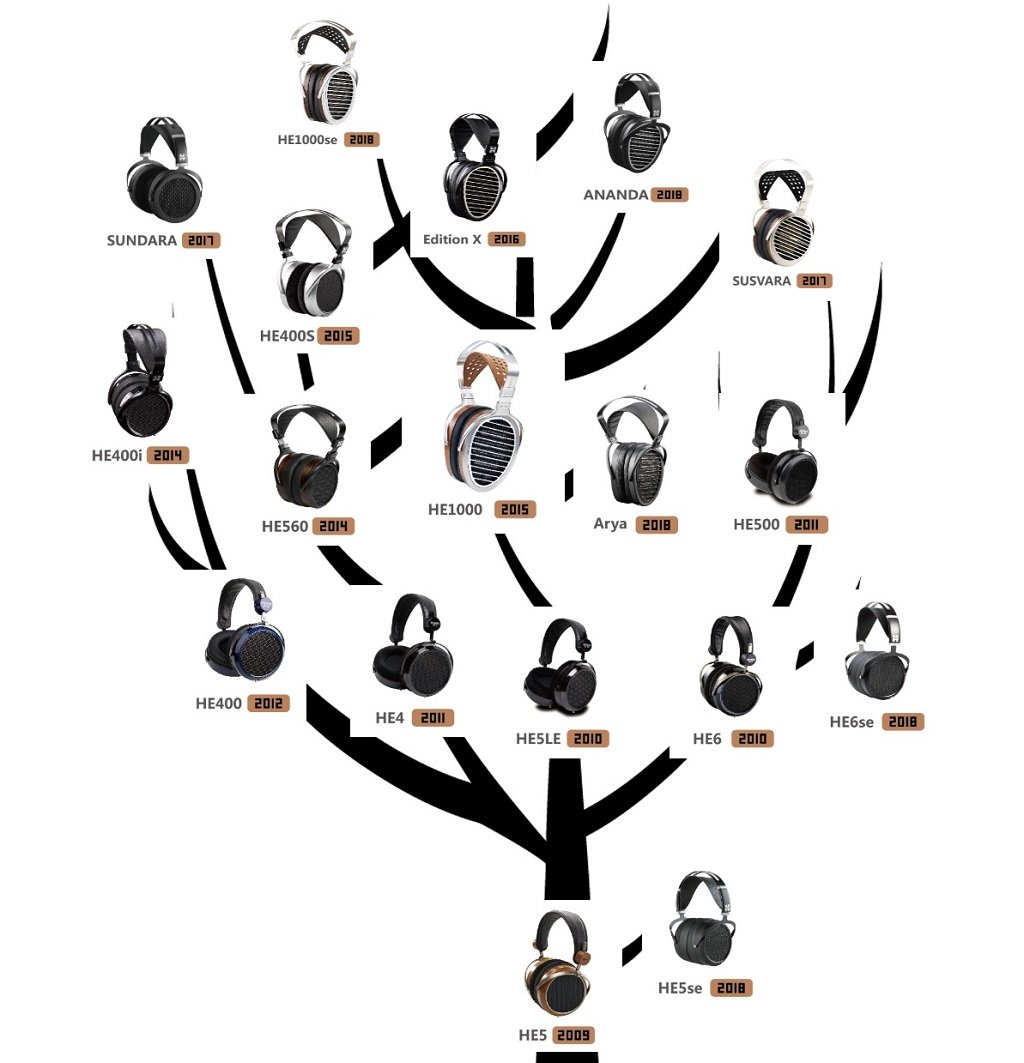 I didn't expect it to measure this good given the HE-400i is just soso. and didn't expect you like the default flat bass response without the EQ!

for the newer hifiman it seems they moved to a thinner diaphragm and single sided magnet so the wiggle in response (resonance?) ~500-1khz seen in the HE-400i are present in the iterations after the HE-6 generation (The HE-1000 (V1&2), Sundara, Survava etc.) and from very subjective auditions in local shops it sounds quicker and more airy but with less control, that's why I kept the old HE-500. the Drop HE-5XX seems interesting if they did remake the old HE-500 drivers and matches them

Amir vs Jaakkopasanen (measured by InnerFidelity):

YSC said:
the Drop HE-5XX seems interesting if they did remake the old HE-500 drivers and matches
Click to expand...

While the HE5XX are double-sided, and 'seem' to be symmetric (at least visually), they also are said to be identical to the Deva, and not HE500 remakes - but 'inspired by'

Really hope Amir is able to add the Deva/HE5XX to his upcoming Ananda/Sundara reviews.

Rather long winded but the following does get into the insides of the 5XX.../Deva:

Thx Amir you are a star.
I had HE6 and like a numbnutts drove it with a speaker amp,
love everything about it except the elevated highs, so had to let it go.
AVI DM12 + AVI ADM10
QC35II
You must log in or register to reply here.