AnalogSteph said:
10 W at idle is quite a lot for something with a 90 W Class D + 15 W Class AB amp (I mean, my old K+H O110s are at 11 W each and all AB), so that 24/96 DSP goodness may be slightly power hungry. They do apparently have a sleep mode at 3.5 W, though available documentation does not mention any kind of auto standby
Click to expand...

AnalogSteph said:
(Since I've gotten my PC at home to 15 W at idle and around 20 W lightly loaded, its power draw is being dwarfed by my peripherals, so I'm slightly sensitive to this issue now...)
Click to expand...

It's conceivable that the power draw will be less in practice (through a kill-a-watt meter) than stated in their specs, but disappointing if they don't include an 'auto-off' feature considering the use of class AB amplification, I agree.
Last edited: Apr 7, 2022
D

Not bad at all. A8H might be a viable competitor for the KH310, assuming they've tuned it correctly.

EDIT: GC prices are $1500 each for the A8H. If it's good, it's a no-brainer buy.
Active Speakers>Passive Speakers
Dome Mids>>>>>All Others

where? I cannot see them on thomann
R

buscon said:
where? I cannot see them on thomann
Click to expand... 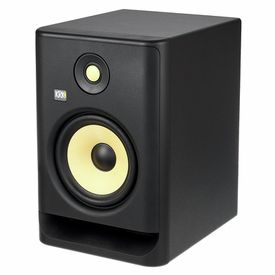 www.thomann.de
“If someone doesn't value evidence, what evidence are you going to provide to prove that they should value it? If someone doesn’t value logic, what logical argument could you provide to show the importance of logic?” ― Sam Harris
P 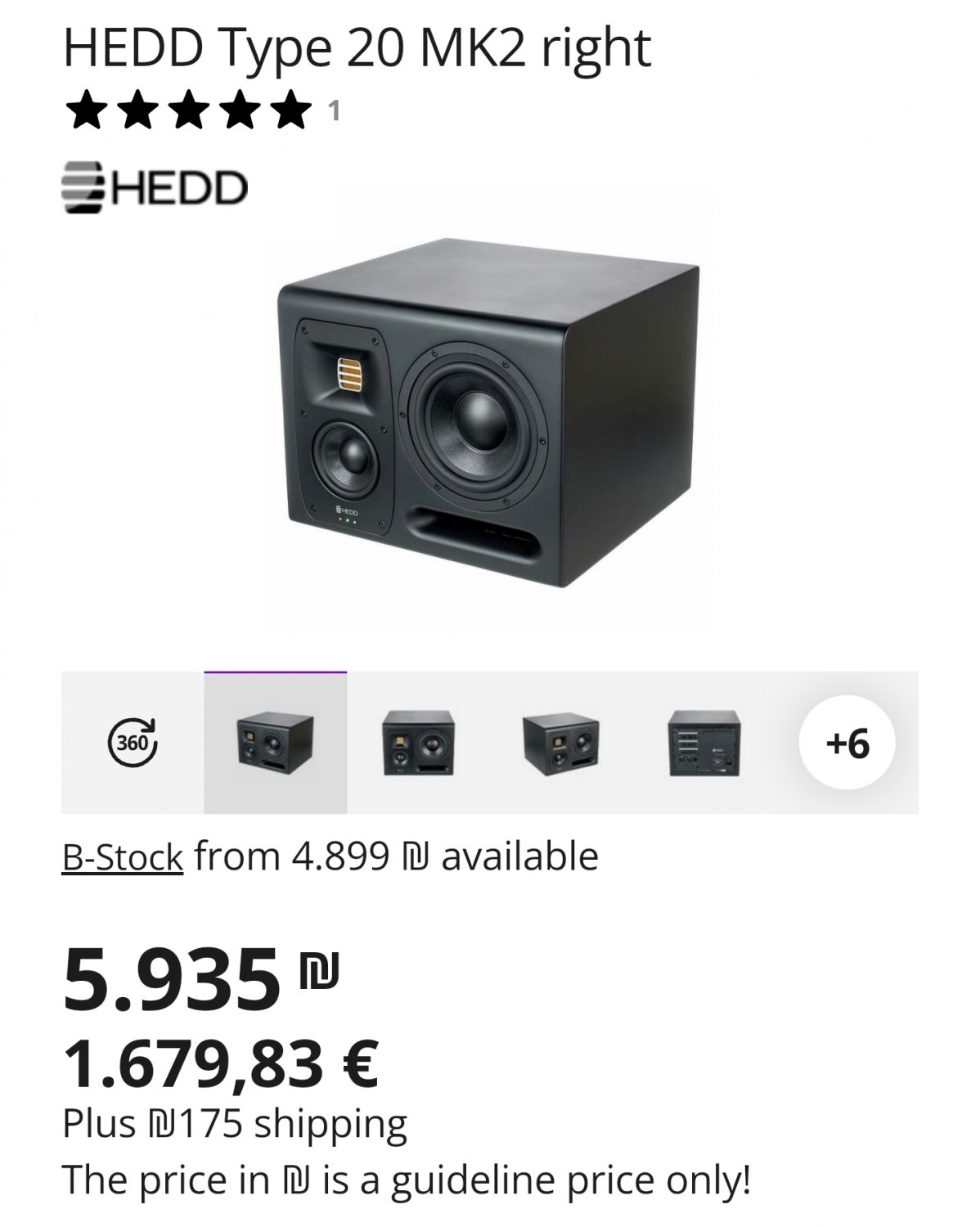 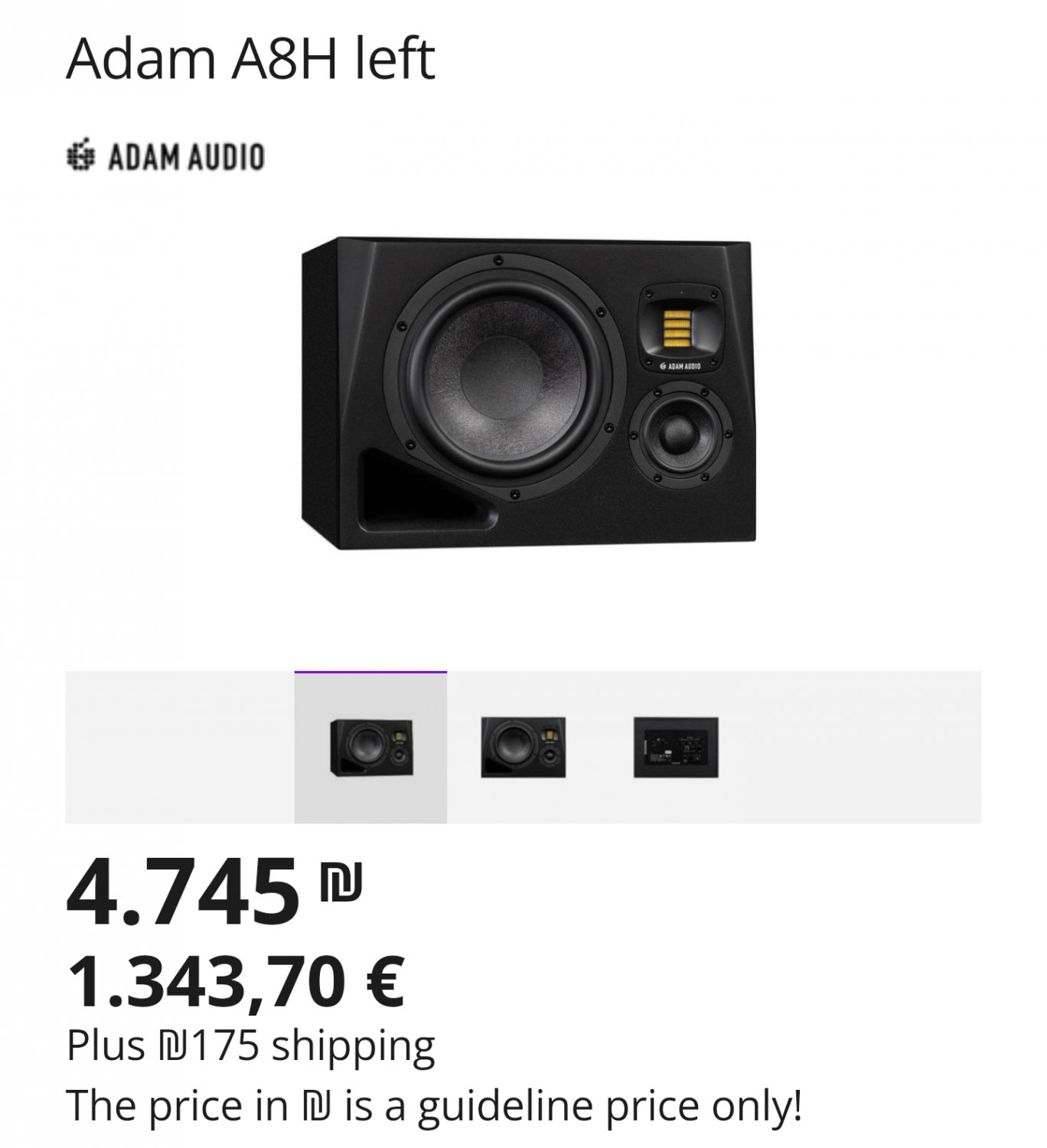 Zvu said:
How is this an event ? I fail to understand this hype.

Adam sells expensive (with regard to performance) loudspeakers which are not cutting edge technology nor performance in any way. Best one could say about them is that they properly implement solutions that are known to be reasonable.
Click to expand...

They made a digital monitor with no digital connectivity...FAIL
D

Zvu said:
Adam sells expensive (with regard to performance) loudspeakers which are not cutting edge technology nor performance in any way. Best one could say about them is that they properly implement solutions that are known to be reasonable.
Click to expand...

I'm not one to defend Adam, but "properly implementing solutions" seems to be a very difficult thing for a lot of audio manufacturers.
Active Speakers>Passive Speakers
Dome Mids>>>>>All Others
T

Well I could build my golden sample to near perfection. But to manufacture it at +/- 0.5 dB is not an easy thing to do cheaply. Most of these manufacturers are small (<300 employees) because it’s a niche market.

Many probably don’t employ six sigma or other strategies of the big companies.

But this is music reproduction; it ain’t critical like this automatic transmissions or airbags…
Last edited: Apr 9, 2022

I gather that +/-0,5dB tolerance was/is a problem for passive crossovers but DSP's, being cheap as they are, makes that practically non existent problem.
H

Zvu said:
I gather that +/-0,5dB tolerance was/is a problem for passive crossovers but DSP's, being cheap as they are, makes that practically non existent problem.
Click to expand...

Drivers build within +/-0.5dB no problem?

I have the feeling that you are just trying to make ADAM Audio look bad.
NO MQA

I have the feeling that you are just trying to make ADAM Audio look bad.
Click to expand...

You can have any feeling you like, that's subjective category i don't care for.

On objective part of your post: who cares about the driver tolerance (which is always good enough unless you use real junk) if you adjust for it by dsp in final design ? Tymphany have tolerances lower than 0.5dB in lowest priced products. I have 8 pieces of Peerless TC9FD18-08 on my hand, small 12€ fr's, produced 5 years apart. They measure spot on: ts parameters and frequency response.
Last edited: Apr 9, 2022
G

A7V looks good to me. But why are there no measurement charts on the site yet? And the maximum of 105 dB SPL is very strange.
Last edited: Apr 9, 2022

Well, that is not uncommon peak loudness for 7" mid-woofer with 33mm voice coil diameter. It probably has lower Xmax than the 7" mid-woofer used in S2V which has larger voice coil and is advertised as ELE (extended linear excursion) which does 120dB/1m for a pair. I like the looks though as it reminds me of A7X.
OP

A little disappointed that they opted to go with a 4" instead of 5", but I guess it's targeted as a Neumann KH80 competitor for modestly-sized desk use at quite close range?
M

"You can rotate the tweeter and maintain dispersion characteristics"

Not of the woofer is moved to the side.
T

Zvu said:
How is this an event ? I fail to understand this hype.

Adam sells expensive (with regard to performance) loudspeakers which are not cutting edge technology nor performance in any way. Best one could say about them is that they properly implement solutions that are known to be reasonable.
Click to expand...

Once upon a time Adam absolutely dominated the midrange monitor market. I can't quantify this but it seemed like, back in 2010 or so, every "serious" bedroom producer was using A7Xs. The A series was very, very popular... so them finally getting a major update after over 10 years is noteworthy.

These new monitors have quite the feature set. I'm very curious to see how they compare to the equivalent HEDDs.. I'd been of the opinion when Klaus left that the majority of Adam's engineering capability went with him, but then the T series was absolutely excellent so we'll have to see what the measurements look like.
Studio: Fireface UC, Neumann KH 310, Definitive Supercube 6000 / Schitt Magni, Beyerdynamic DT 880 Pro
HT: Anthem MRX-510, Martin Logan ESL, Margin Logan C2, Paradigm Monitor 7, Funk Audio 18.0SE

I see, and tend to agree. I really liked A7X. In my opinion S series represents real update of their top line monitors and something that is equivalent to (or slightly better than) HEDD models. New A series really looks like downgraded S series, made to be cheaper and of lower quality. They've obviously just needed something that will be performance wise and priced right between serious S series and plastic T series. S2V measures great and i can't imagine what would new A7V do better.
Last edited: Apr 12, 2022
You must log in or register to reply here.

Monday at 7:39 AM
Allank
A
M
I Have a Very Important Question. (Adam Audio Speakers)