The kit we bought, our current setups

rdenney said:
No, I moved from SA to Dallas in 1993. Dallas is NOT an improvement over San Antonio, and I still miss SA. Moved from Dallas to Virginia a few years after that, and met my wife here.

Rick “had a better listening room in SA but here is now home” Denney
Click to expand...
Congratulations on your marriage that alone made all those changes worth it! Yeah I love SA been a great place to live

Nothing fancy. After several trials of roon, I decided to stay in at least one year. A week later I successfully set up ROCK on the Intel NUC.
TIDAL | roon (ROCK/NUC) | RME ADI-2 DAC FS (DAC/PRE-AMP) | NAD 320BEE (MAIN) | Buchardt Audio S400 | not a radio shack guy but auscrephilia confirmed
K

I'm finally at a place where I'm very happy with my setup and I don't expect any major upgrades for awhile. The only thing I might do is get slightly taller speaker stands.

Somafunk said:
Very nice, clean and unfussy - I approve of this and bet it sounds good. I particularly like the scandi inspired unit with the sliding doors and the acoustic treatment.
Click to expand...
Thanks! Yeah I love the way it sounds. Over the last five months I went from Dayton B652-Air to Klipsch RP600 to Triangle br03 and finally to the Elacs. The B652-Air has been retired to bedroom use. The RP600 was trash, sent those back. BR03 was decent but something was missing in the midrange, didn't feel quite balanced enough, sold those. I'm very happy with the Elacs. I can listen to them all day without fatigue and they always sound good.
Last edited: Mar 20, 2021
My current setup
Elac DBR62 | Buckeye NC252 | SMSL Sanskrit 10th v2 | Audiolab 6000CDT | JBL Sub 550p
D 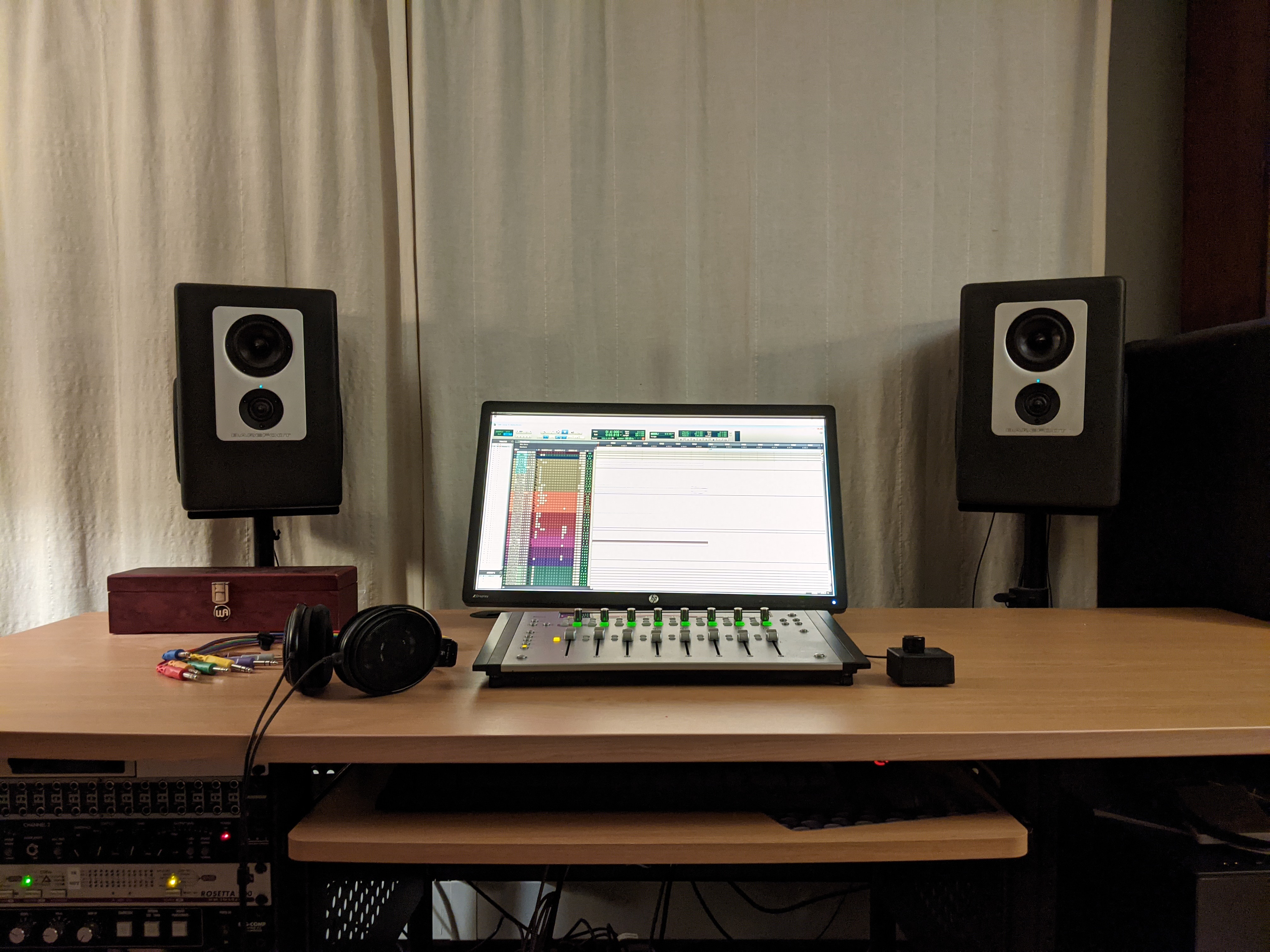 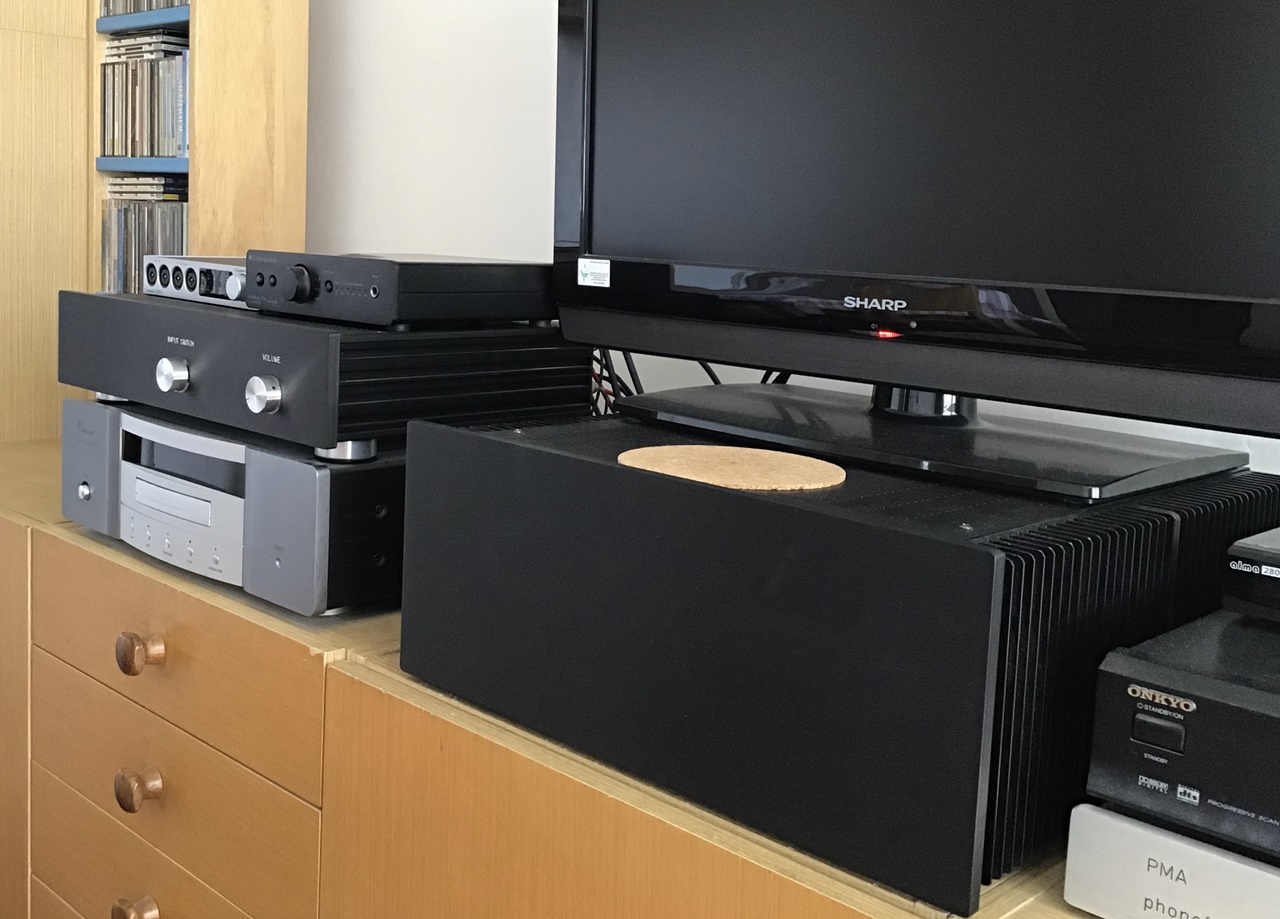 pma said:
My newly built DIY 2x250W/4ohm amplifier sitting below the SHARP TV
Click to expand...
The cork coaster is for your wine glass.
Ricky Roma: I subscribe to the law of contrary public opinion... If everyone thinks one thing, then I say, bet the other way... 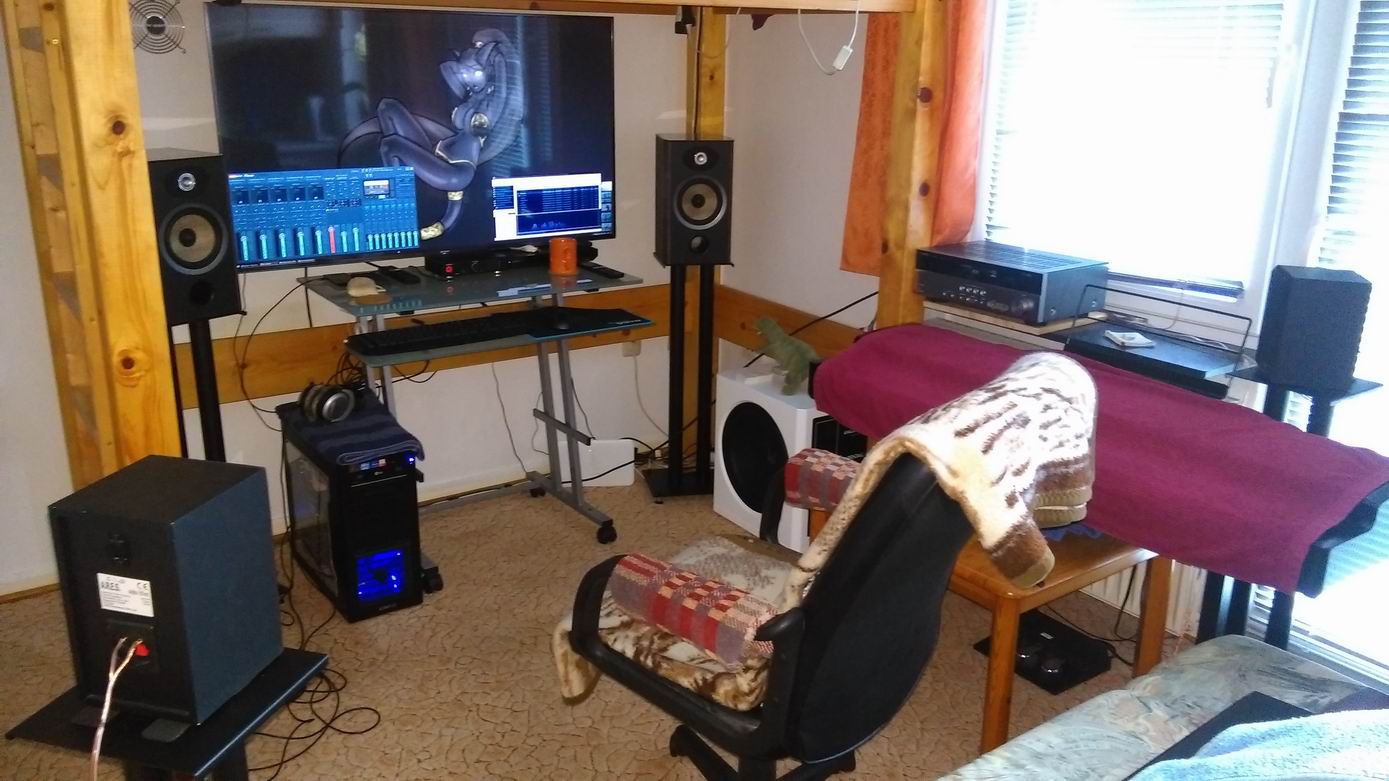 Ordered an Arendal 1723 Sub 1s.... I think I went a little overboard with this one.
Never would have thought that such a big guy can be that stealthy. Integration was pain free and is seamless. 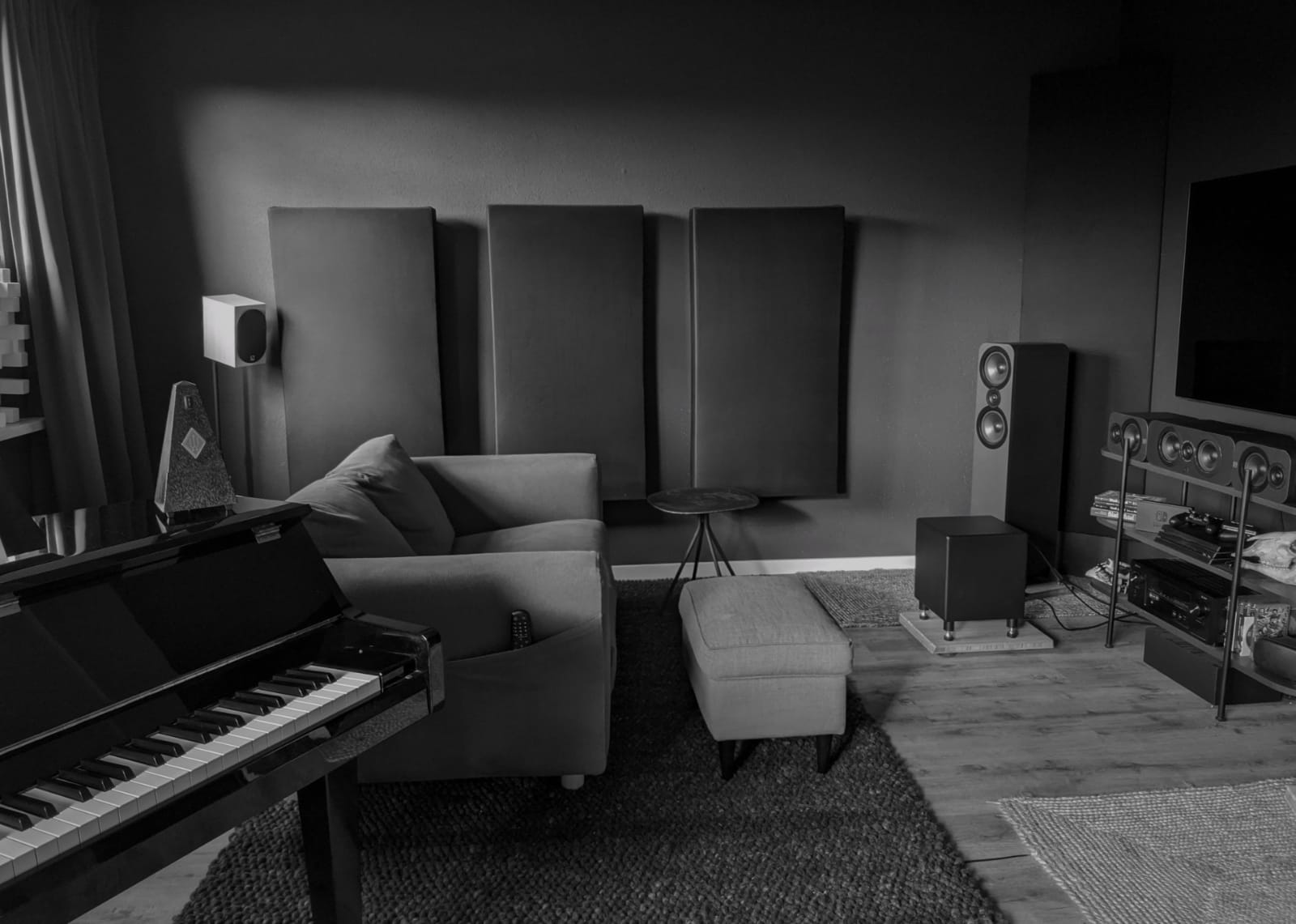 I recently moved into my new house, and have been slowly turning the rooms into habitable spaces. My cinema room was the first one I worked on. Priorities, eh? Who needs a kitchen anyway.

A modest setup (compared to the crazy rooms I've seen here and on AVforum), because I'm still firmly in the first phase of my AV adventure, but it's getting there.

Tried several different ways of coupling and decoupling the front stage speakers, and settled on a decoupling solution. The fronts and sub are now standing on spikes on thick, multi-layer bamboo plates, with sorbothane isolators keeping the plates off the floor. The center is raised slightly with much smaller sorbothane feet, keeping it semi-decoupled from the wood and steel AV rack in the front. This also raised it perfectly to ear level and in line with the tweeters from the 3050's. The rug is the thickest, densest, hand-made woolen rug I could find within my rug-budget, with a felt underlayment underneath. The drapes behind the listening position are thick noise blockers and they block all light coming in when they're closed.

"Objectivists vs. subjectivists discussions make me hungry. It's a medical condition."
H

My system is quite simple at the moment:

Thinking of adding a SVS SB 1000 pro sub when I can afford it.

My only other niggle is I occasionally want to play music loud and can get up to 85-90/100 on the SHD and the distortion kicks in (I believe from the NC252MP which graphs show some distortion at high levels).

Might venture into some room treatment in our new house.

Vict0r said:
The drapes behind the listening position are noise blockers and block all light coming in when they're closed.
Click to expand...
How closed were they when you did the foto?

...Very impressive. The acoustic treatment.
...I want to see the rug. (Yes, rugs are expensive...relatively, it seems, but so are acoustic panels.) ...

Katji said:
How closed were they when you did the foto?

...Very impressive. The acoustic treatment.
...I want to see the rug. (Yes, rugs are expensive...relatively, it seems, but so are acoustic panels.) ...
Click to expand...
The layered drapes were opened about 80% of the way on that photo. If I close them, the room is pitch black. I just wanted the place to be able to get as dark as possible. For that reason, I painted the walls a dark grey color because I wanted the OLED panel to "float" while watching movies. The less light reflecting off the walls, the better. I thought about painting the walls as black as I could, but I thought that was a bit too "bat cave".

Here's a close up of the rug. I spent more on the rug than I did on the AVR (bought that one second hand, though). I had no idea these things could get so pricey. 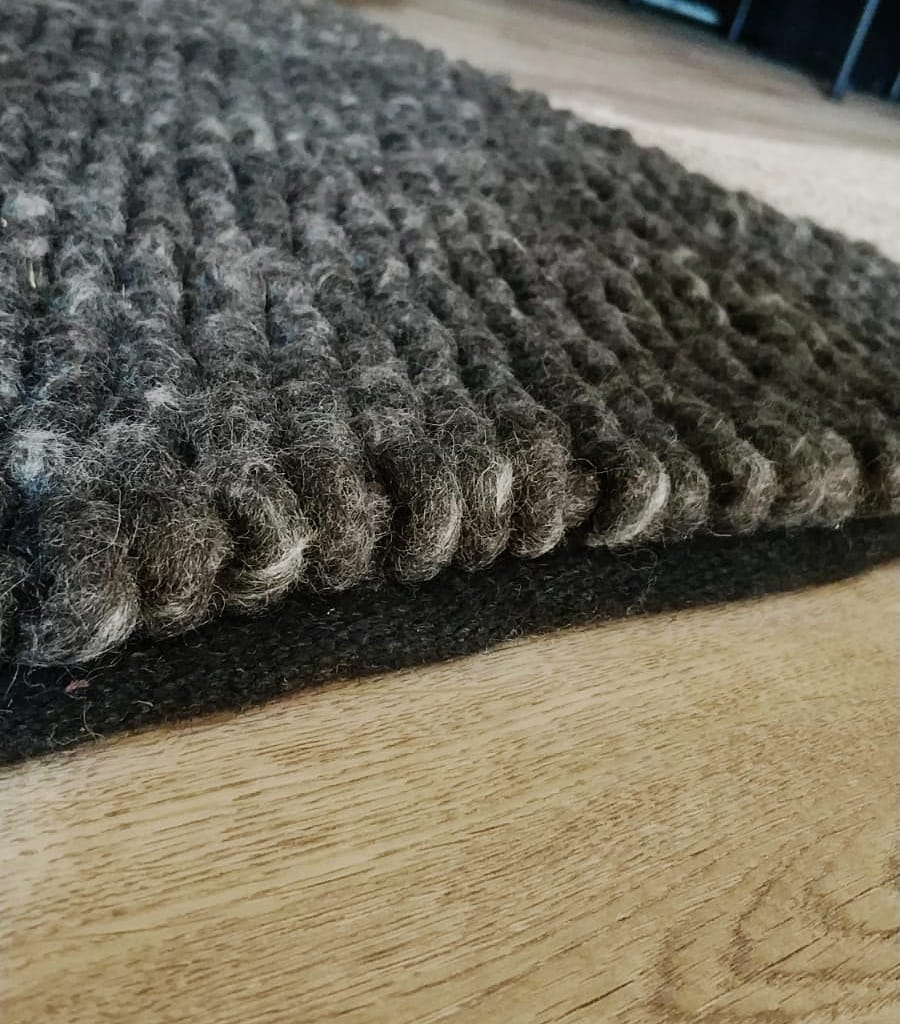 "Objectivists vs. subjectivists discussions make me hungry. It's a medical condition."

Some pics of recent changes here, which were effected for let's say 75% aesthetics, 20% sonics, and 5% get-stuff-out-of-the-basement. I designed the cabinets and mantel, and they were (slowly but well) built for us.

The front of the room went from this: 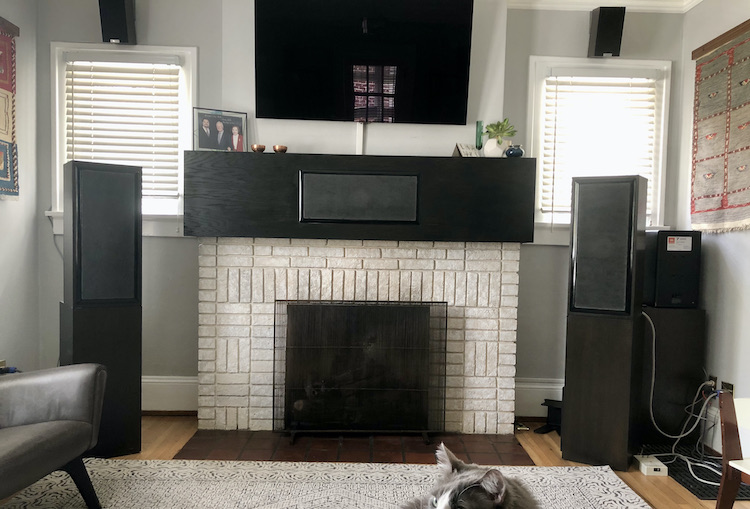 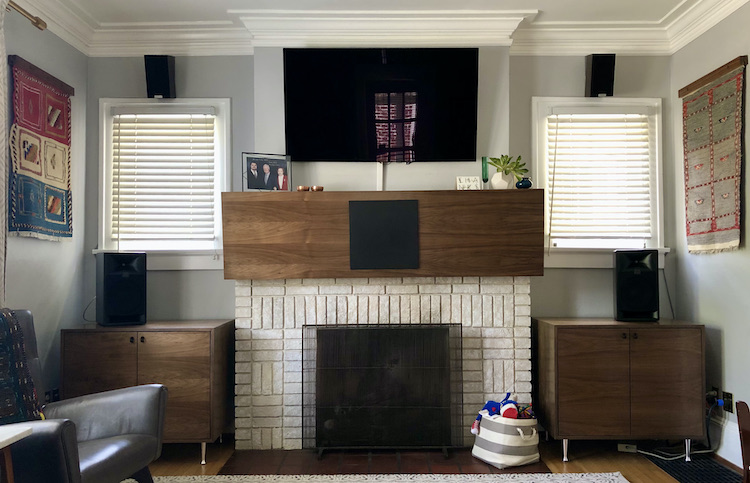 Note how much actual and apparent floor space has been liberated in the new setup. Living room, for reference, is about 14' wide, 22.5' deep, and 9.5' high.

The headline is a sea change in the LCR speakers. I've literally used speakers with concentric drivers as my primary system speakers for the whole of my adult life so far. Now the front left/right are JBL 708i and the center (integrated into the mantel) is JBL Synthesis SCL-3. The mantel slopes down, to aim the throat of the horn at my nose when seated in the primary position. 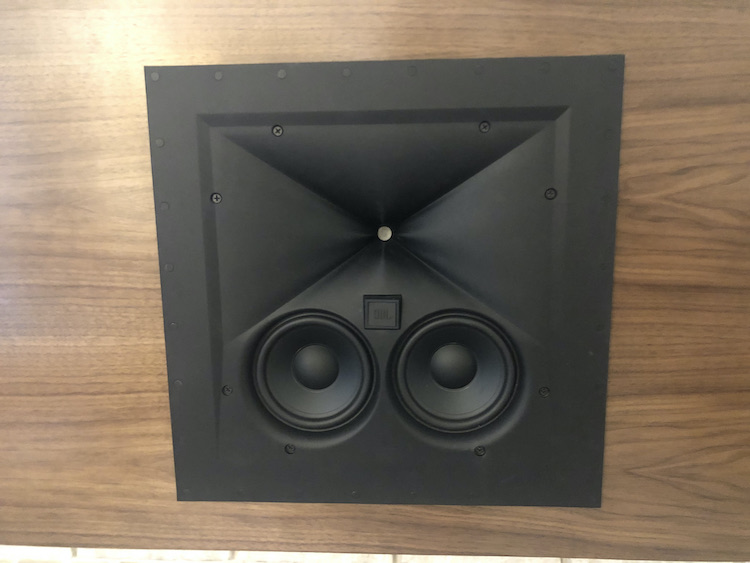 There are 4 subs in the room, but only one is apparent as such. Here's the guts of the multisub system. It is complete overkill, and mostly this way because I had the drive units. If I were starting over each sub would probably be a small closed box with dual opposed 10s. 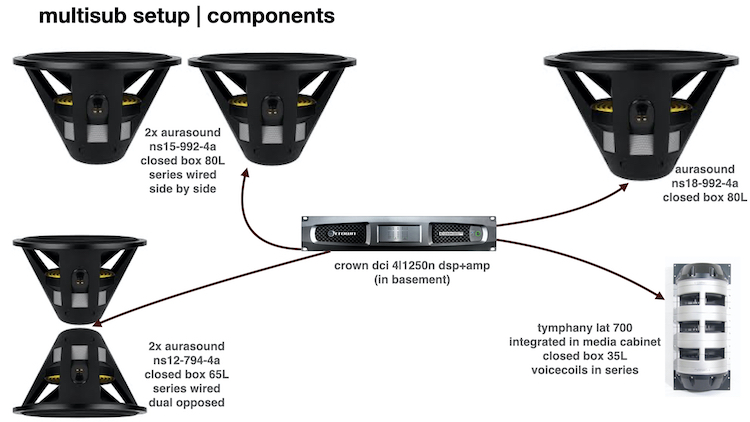 The front two subs are also functional storage, though I had them finished beautifully inside as well. 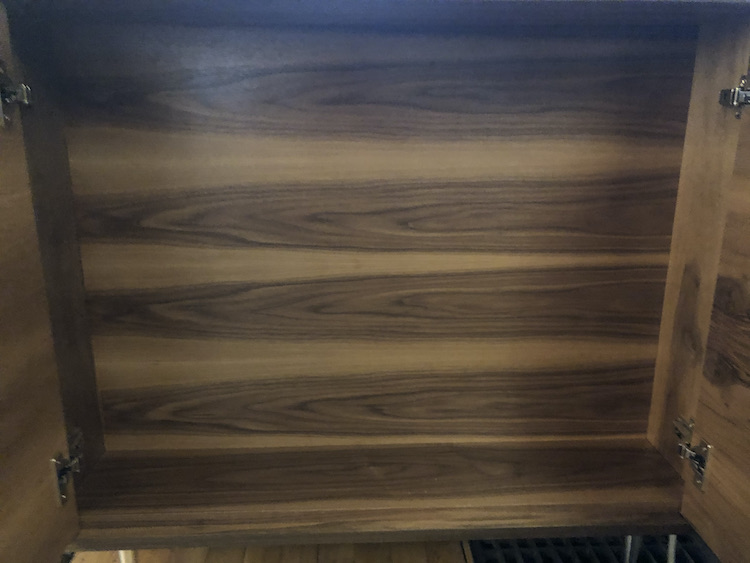 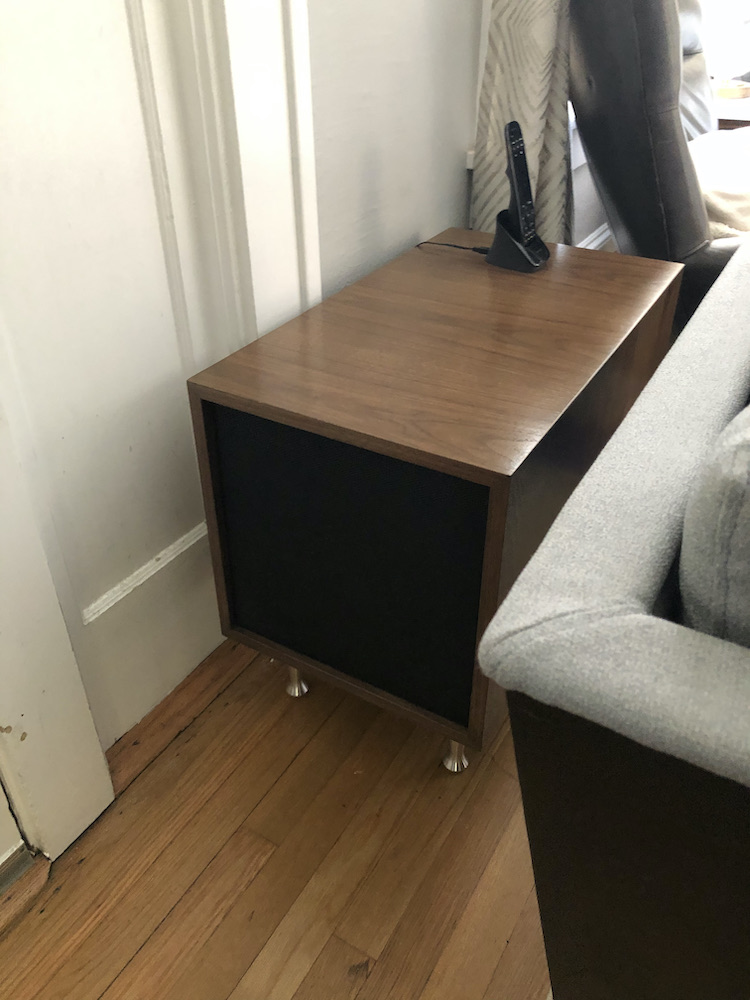 I don't consider it dialed in yet (for example have only run a 5-point Dirac cal) but so far there is an improvement in resolution at low volumes. I thought the old system sounded wonderful, so any small improvement is welcome, giving the liberated floorspace and more attractive living space.

Here's the full equipment list.
Sources
Processing
Amplification
Speakers (Auro configuration 7.1.4h)
Screen
Next step once it's dialed in is to see if we actually lose anything swapping out the JBL 708s for 705s. If not, reducing the visual footprint of the system makes the change a no brainer.
Last edited: Apr 9, 2021
http://hometheaterhifi.com/author/jay-haider/

My Computer could also be used as a source (Audirvana installed) but it is more convenient to play music using the Volumio App on my mobile phone (although the app is buggy as hell).

The next project will be a DIY compact stereo speaker. It will be a slightly modified speaker kit with DXT tweeter, a 15 cm bass/midrange and a PR. But this will take a little time.....
S

here's the geek wall of my bedroom. It's a veritable cornucopia of nerdish delights! lol

So it's tough to see what's actually in there so there's a bunch of comic and rpg books, and some board games and deodorant lol. Under that purple cloth at the top of one shelf unit is a nice arcade style joystick controller for my MAME shooters. But as far as audio goes, there's a bunch of bluetooth speakers (Soundcore Motion +, Wking D8, a couple Tribit Xsound Surfs which sound really great in TWS mode), plus a bunch of headphone gear - a Fiio Q1 amp/dac, Fiio E10k, Liquid Spark amp, Schiit Heresy, AKG K240 headphones, HE-400i headphones, theres an E30 dac behind the Tribit on the right there, behind the TV is a set of Takstar Pro82 headphones. That blue Wonderboom bluetooth speaker is blown so it now serves as a weight to keep the Heresy from sliding around, lol...
Last edited: Apr 9, 2021 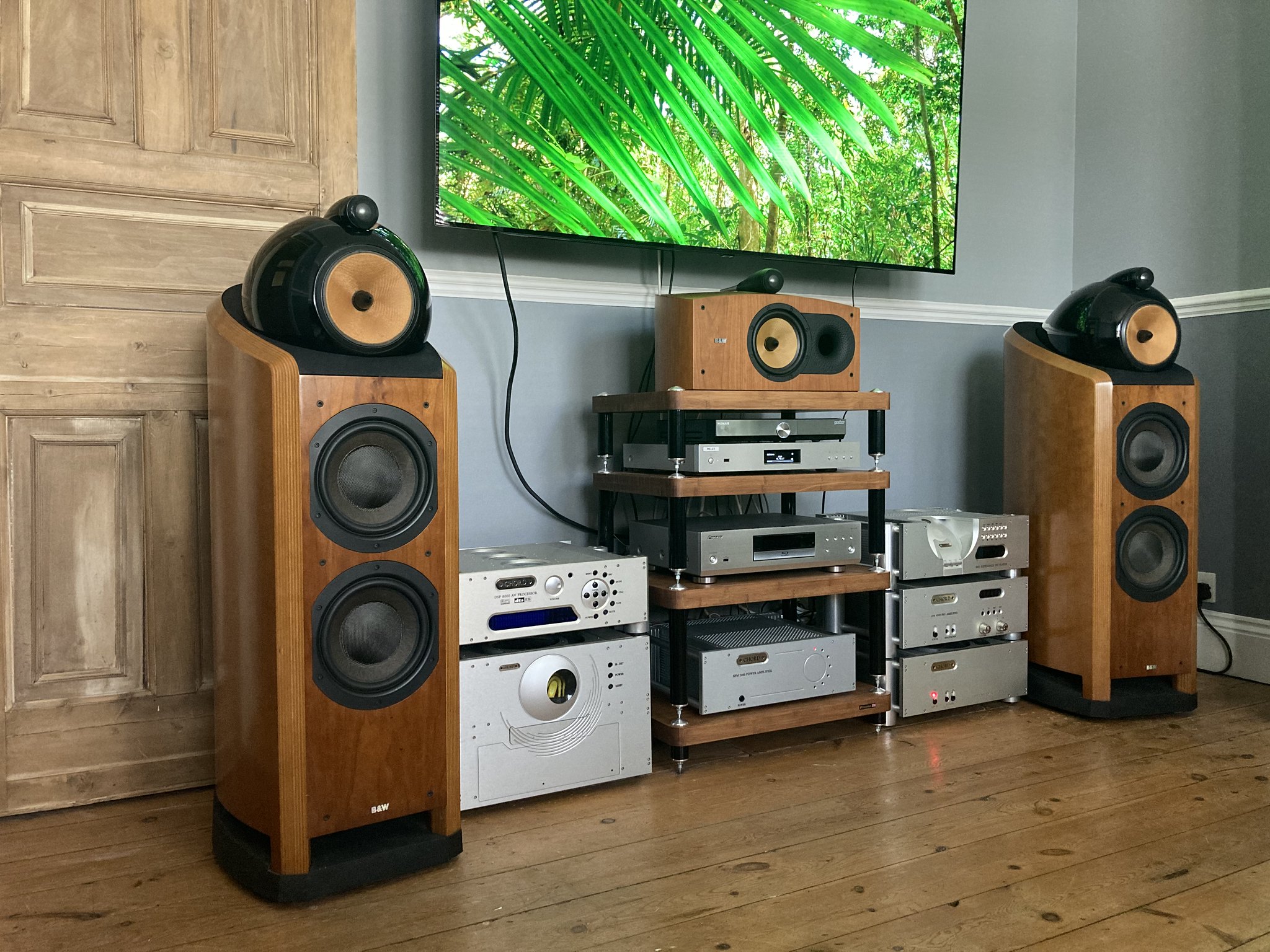 The last few changes were to reduce the box count and for additional features. I also treated myself to a new TV. I’m just waiting for a few more pieces of furniture and some CD storage to turn up then I’ll finally get around to making some measurements with REW.

Harryharryharry said:
My system is quite simple at the moment:

Thinking of adding a SVS SB 1000 pro sub when I can afford it.

Have simplified a lot lately with a preamp, streamer and probably the DAC going to be sold in favour of the Chromecast Audio direct into the minidsp.

I did get a subwoofer and I'd recommend it. Just started making Dirac adjustments having done EQ via REW and the minidsp until recently.
D

They are a major upgrade from the 590
But that's not a fair comparison. They are at a much higher price point. The 590 will always be one of my favorite speakers but the RBH is my true love 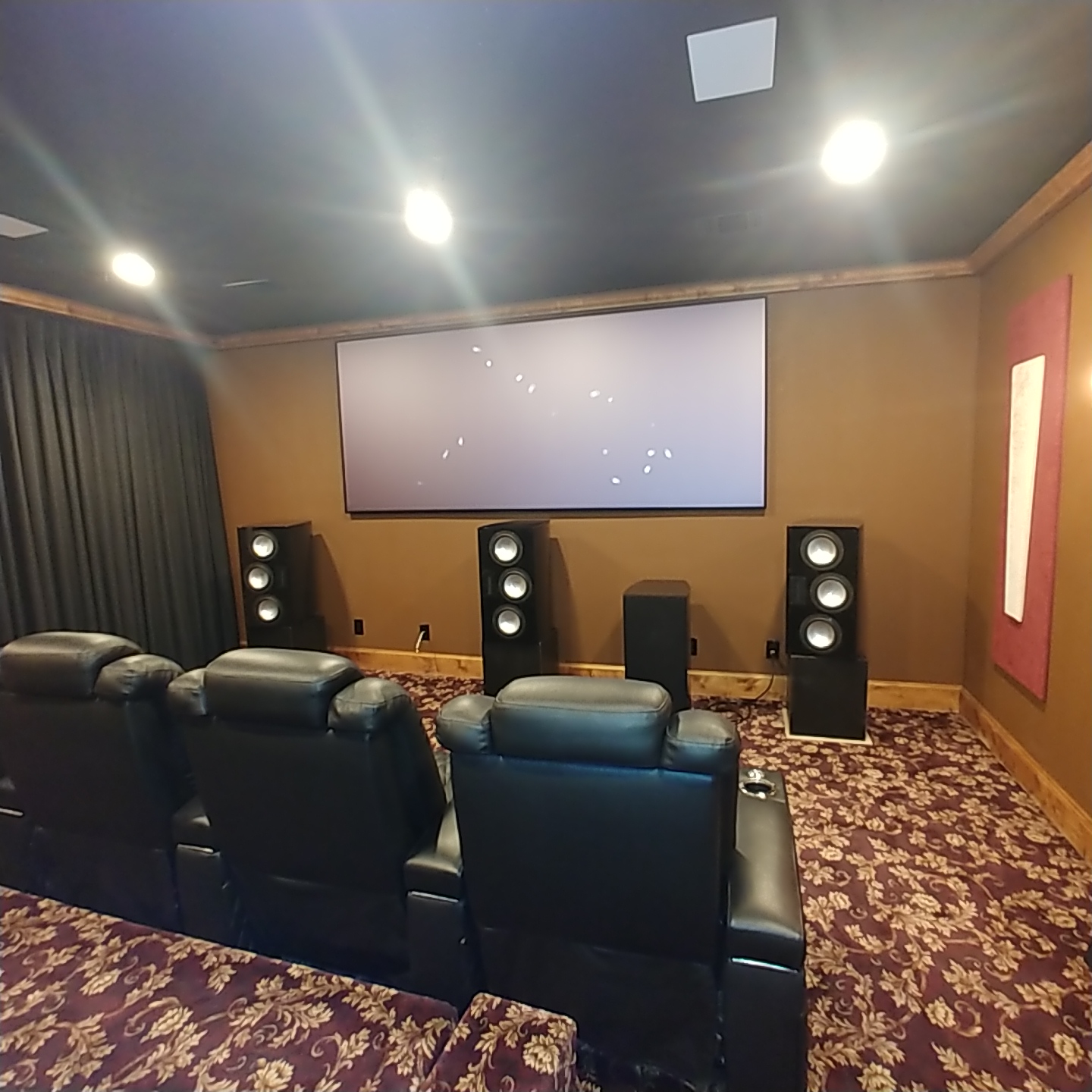 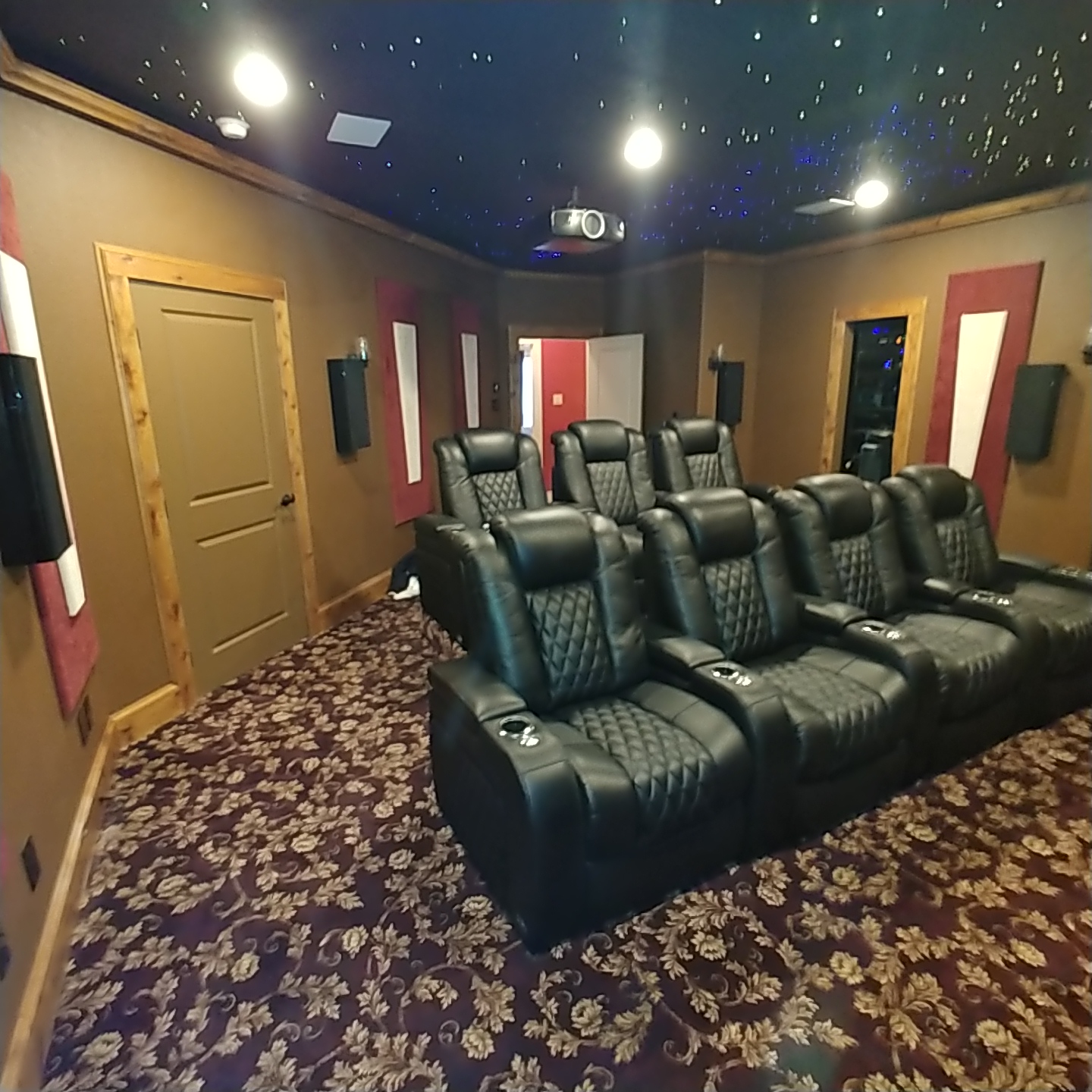 The last few changes were to reduce the box count and for additional features. I also treated myself to a new TV. I’m just waiting for a few more pieces of furniture and some CD storage to turn up then I’ll finally get around to making some measurements with REW.