Review and Measurements of Singxer SU-1 USB to S/PDIF

This is a review and detailed measurements of the Singxer SU-1 USB to S/PDIF, AES/EBU, and I²S Audio Bridge (converter). It is on kind loan from a member. I think the SU-1 was released back in 2016. I hear a lot about it so I am happy to have one to review now. Looking on Amazon, the SU-1 costs USD $400 including Amazon shipping. This is a lot of money to pay in this day and age when USB is built into just about every modern DAC. To use it then, it better far outperform native USB interface on DACs as many people believe.

Other than somewhat fancier feet, there is nothing to distinguish the SU-1 from countless other products from China. Here, you see it in the middle of the stack of gear I used to test it: 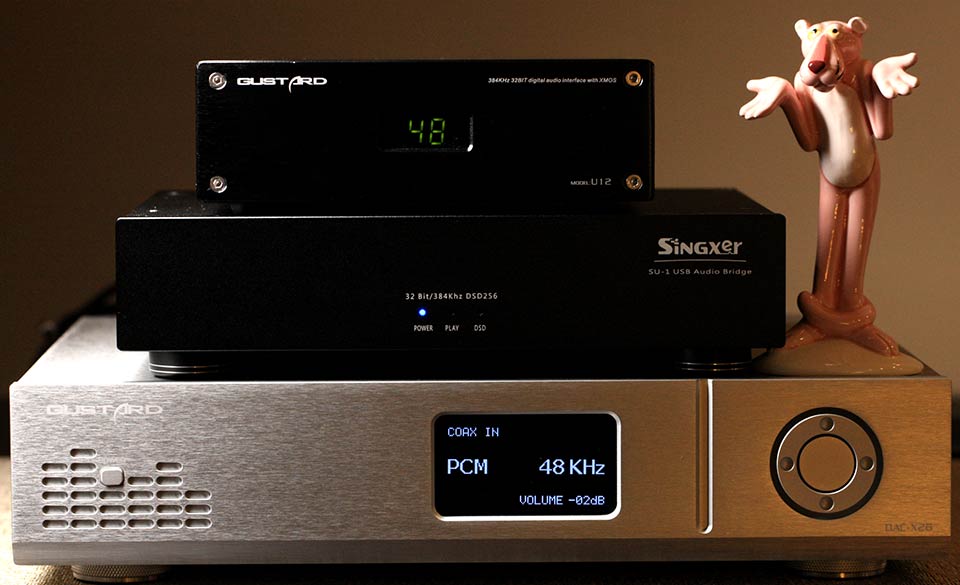 There is nothing to select so not much to say as far as usability. The unit was was plug-and-play in Windows without the need for any driver.

It is nice to see S/PDIF both in BNC and RCA forms. AES output (XLR) is nice because it is balanced and may help ground loops if your DAC has the same input. Can't imagine anyone using the master clock/word output in consumer arena but it is there nevertheless.

As you see, there is an IEC mains socket indicating the power supply is internal. It is a linear affair so not sure why the person who sold it to the member who is loaning it to me, and re-wired it for external power supply input. It was a very clean mod so I just reversed it to AC so that I could test it as others are using it.

Measurements
The ultimate test of all of these tweaks is whether the analog waveform -- the thing we hear -- out of a DAC is changed. So put the recently reviewed Gustard DAC-X26 DAC on the bench, aiming to compare its output using native USB or through SU-1. Here is the native USB input performance on our usual dashboard: 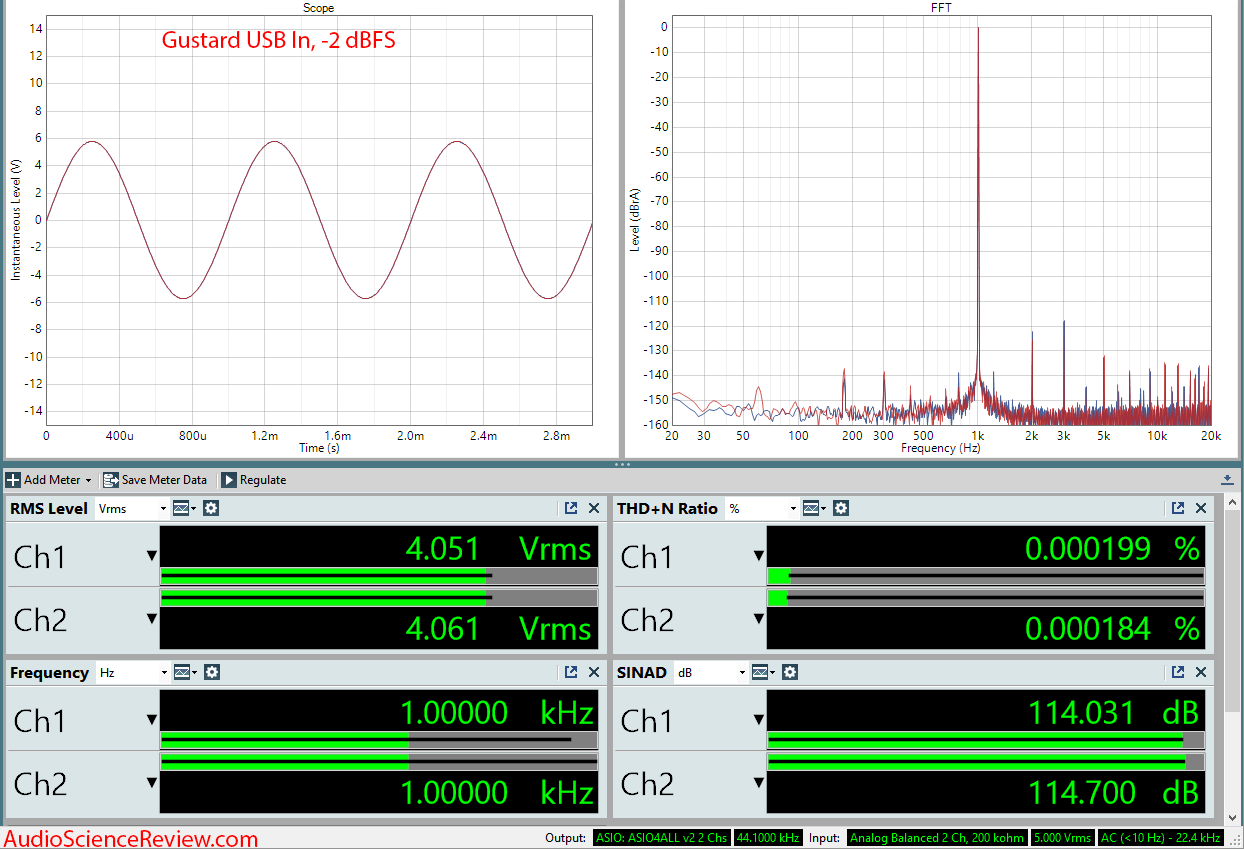 We have seen this before so let's route the USB through Singxer SU-1 and then into S/PDIF input of Gustard DAC-X26: 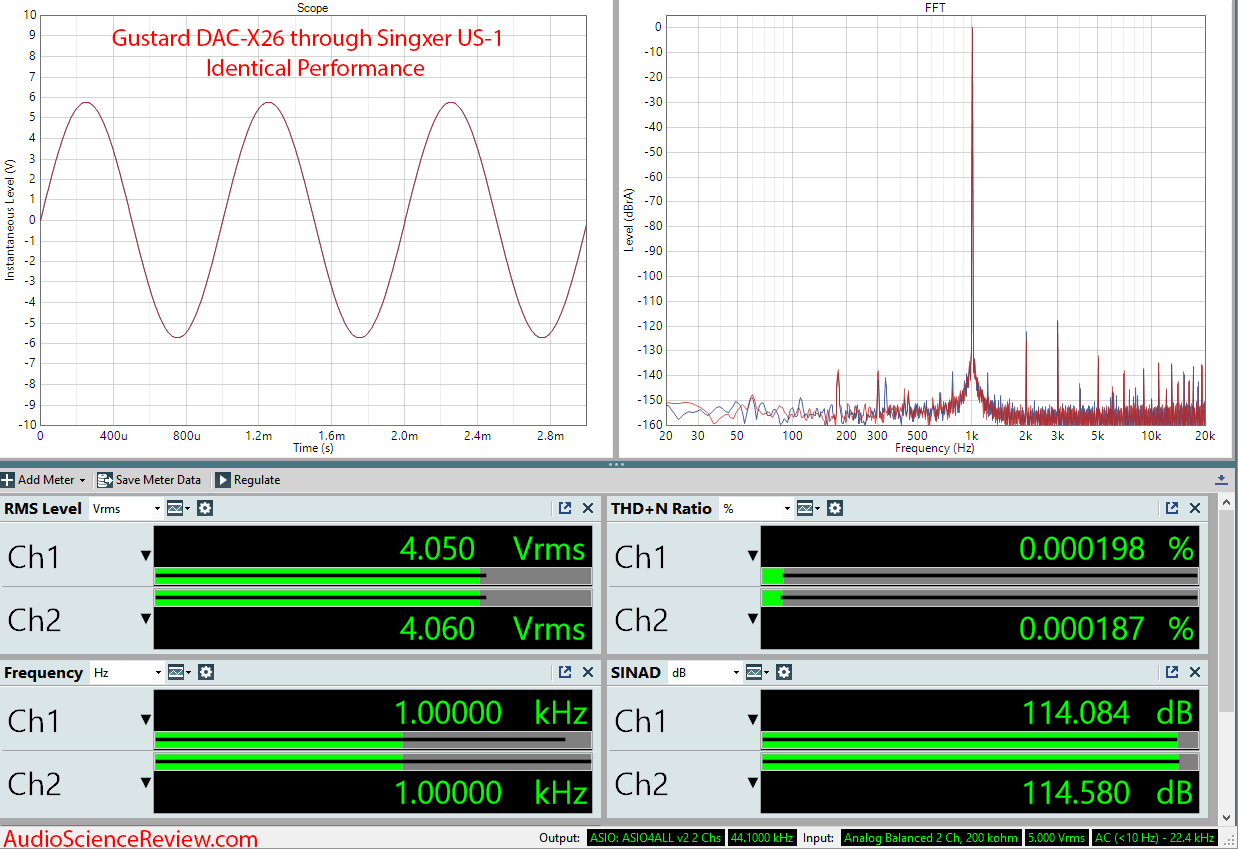 Absolutely nothing is changed other than run to run variation.

Let's get more critical and run the j-test jitter and noise on the DAC again using native USB and through Singxer SU-1: 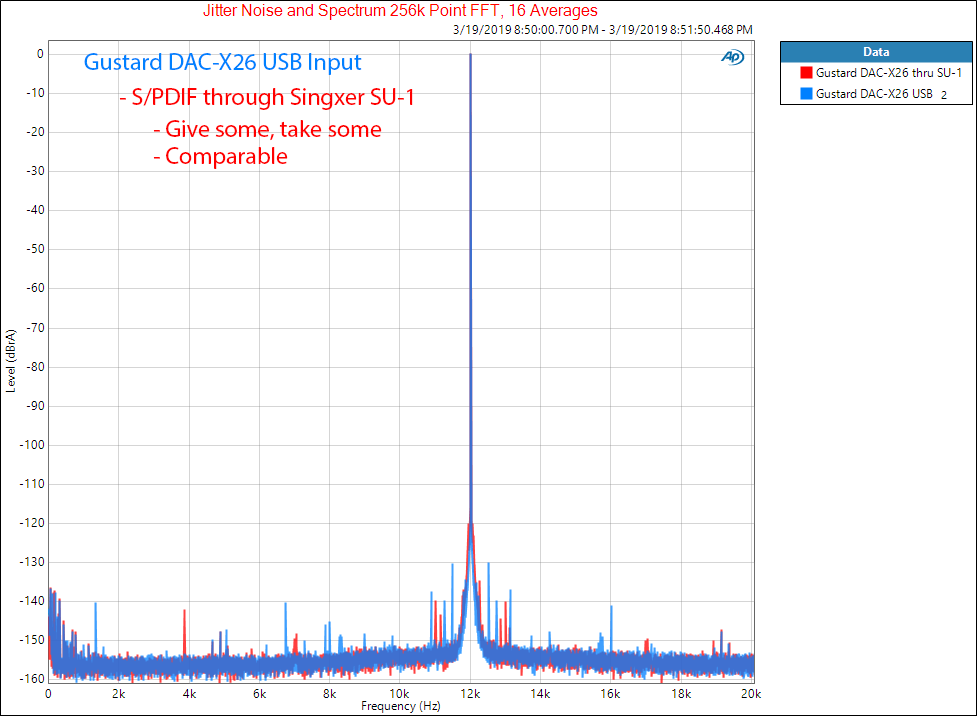 There are a few spikes here and there in both instances. All of them are below 120 dB which means they are provably inaudible.

So as far as Gustard DAC-X26 is concerned, it has no need whatsoever for the SU-1.

But maybe there are other goodies not seen with this DAC so let's analyzer the digital S/PDIF signal itself. First graph is comparison of my Audio Precision analyzer looping back onto itself versus receiving the same bits through USB/Singxer SU-1. What is being shown is the spectrum of jitter while playing the J-test signal (as above): 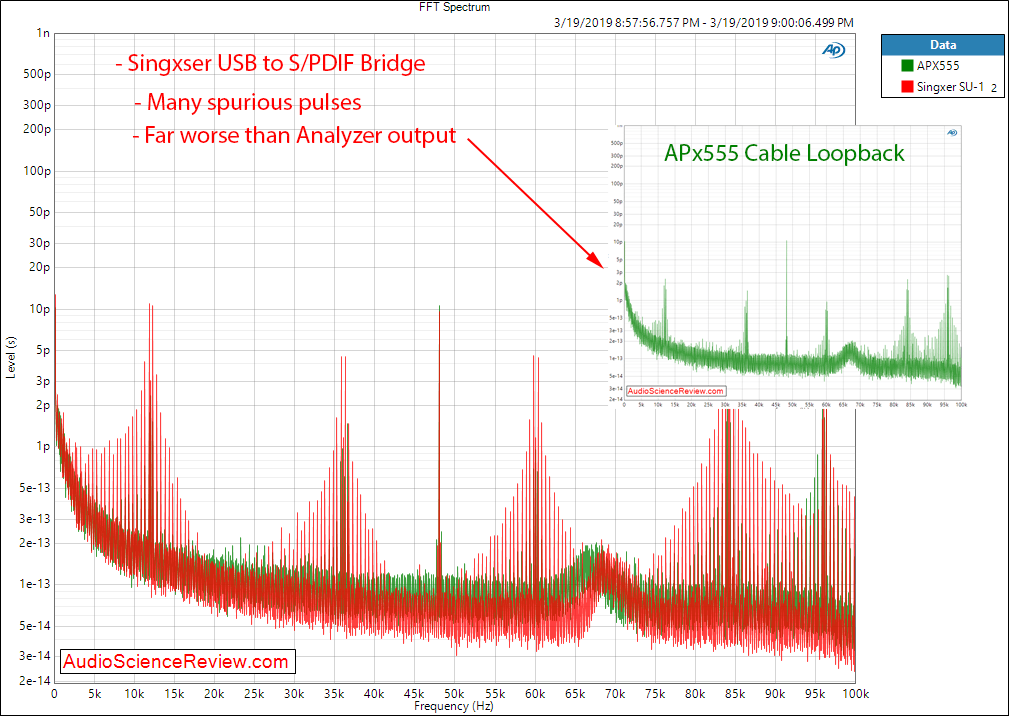 Ideal graph here would be below the bottom with no spikes whatsoever. The world is not ideal so even my expensive analyzer has data dependent jitter. We see spikes correlating with 12 kHz which is the main frequency of J-test (in green).

Looping through Singxer SU-1 (in red) makes matters far worse. The tight spikes are the embedded 250 hz square wave in j-test signal. Their existence here means that jitter is created in SU-1 due to data that it is processing.

Now, you may say that my analyzer better be better. So let's even out the playground by comparing the SU-1 to Gustard U12 USB to S/PDIF converter I bought a year ago but have not had time to review. Here is how the two battle it out: 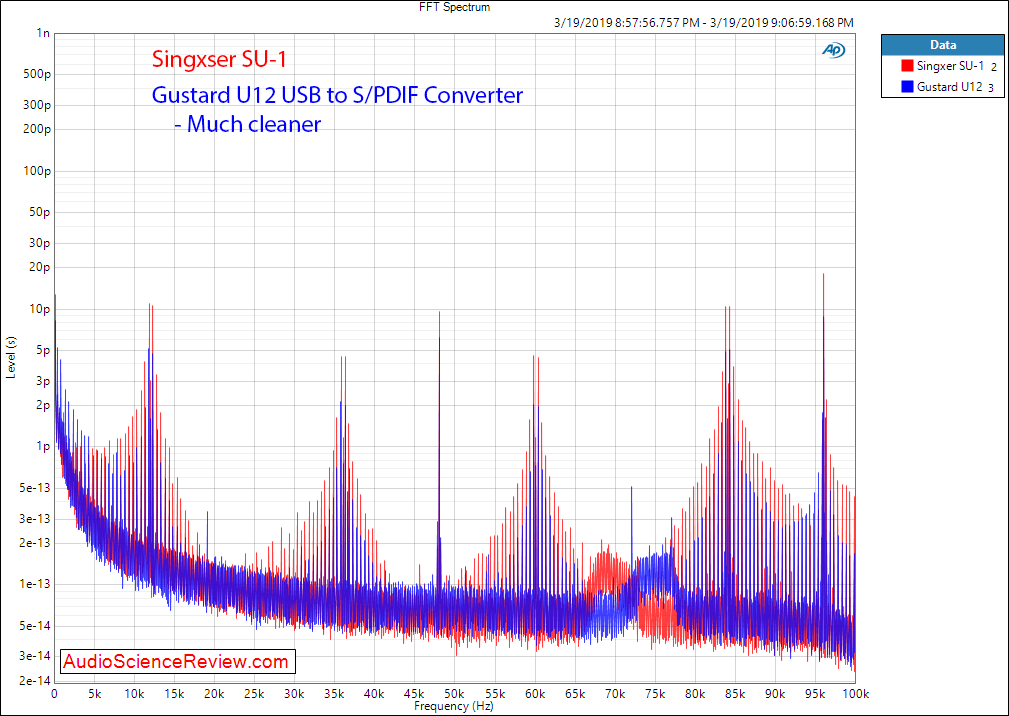 The SU-1 is the same as before in red. The spikes in blue are from Gustard U12. Other than a few more spikes below 1 kHz, the magnitude of the spikes are much lower in Gustard U12. The U12 costs around half as much at USD $170.

Conclusions
As we know intuitively, a well designed DAC whose performance is measured objectively, is of no need to external tweaks. If it comes with a USB input and I show it to have good performance, that is that. Don't chase ghosts with such external measures as Singxer SU-1.

High performance DACs push my analyzer to the limit. As such, I expect a $400 USB to S/PDIF converter to do the same. That is not the case here. The SU-1 output is quite a bit dirtier than my analyzer output.

Comparison to Gustard U12 also shows that the SU-1 is nothing to write home about. The SU-1 clearly has more noise and jitter than it should.

Needless to say, I see no reason whatsoever to recommend the Singxer SU-1. If you have an older DAC without USB input, opt for cheaper options like the Gustard U12 or a few others I have tested. Heck, for half as much you can get a S/PDIF converter running on a Raspberry Pi such as Allo Gigione and get streaming option for free!

Seems like I really need to drop the U12 into one of my systems. I keep a Signxer F1 on me when I travel [got it for $50 assembled bstock]. Works nicely with my Shanling M3s as source and feeds right into what ever DAC I'd like without Drivers

Frankly I like SPDIF only because 9/10 I can get 24/96 without drivers from a wide variety of sources. Cell Phone, Digital Audio Players, my Tab S4 ect... still looks like I won't be purchasing another unit from them...

Wondering if or how much would it help with DAC's that performing badly in their USB inputs though ?

Thanks for the review. Do you have any chance to see if the I2S connection does any better? Most people I know who own the SU-1 uses the I2S out exclusively to some high-end DACs so I'm curious about that.
G

Would it be possible to overlay j-test results with the USB-powered (cleaner) Matrix x-spdif for reference?
OP

maxxevv said:
Wondering if or how much would it help with DAC's that performing badly in their USB inputs though ?
Click to expand...
For $400 you could get a good DAC.
Amir
Founder, Audio Science Review
Founder, Madrona Digital
Contributing Editor, Widescreen Review Magazine
Click for My Technical Background
Master List of Audio Reviews
OP

gvl said:
Would it be possible to overlay j-test results with the USB-powered (cleaner) Matrix x-spdif for reference?
Click to expand...
I can do that tomorrow. For now, the Matrix looks a lot cleaner: 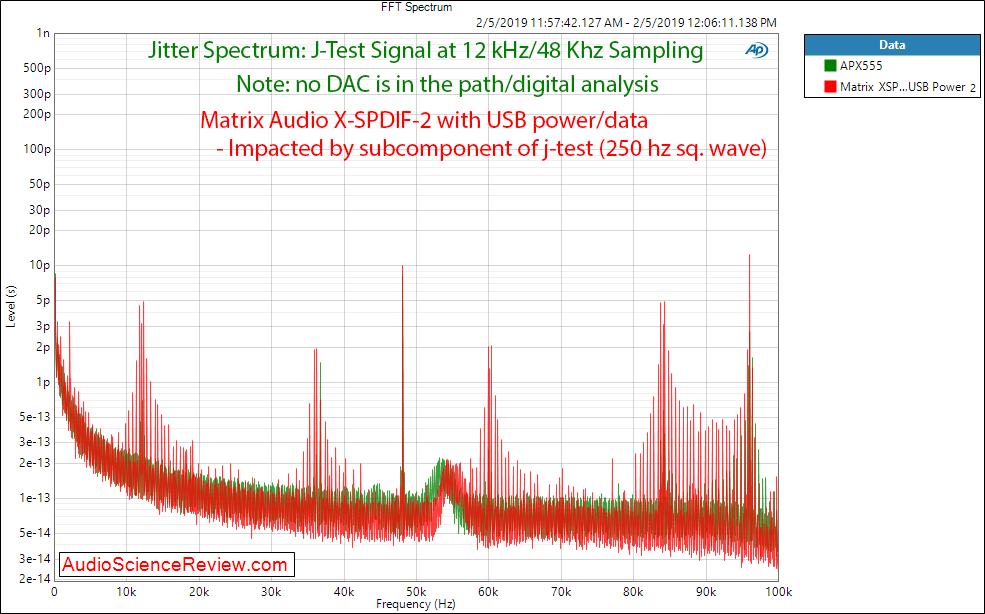 Thank you, Amir for the great review this is everything I wanted to know!

Like @bunkbail I do wonder if there is any benefit to be had with using either I2S (or maybe its balanced AES/EBU port).

I must say, I am surprised the cheap Gustard does better. From subjective reviews it really seemed Singxer has their shit together
OP

I have been meaning to test I2s so I might do that....
Amir
Founder, Audio Science Review
Founder, Madrona Digital
Contributing Editor, Widescreen Review Magazine
Click for My Technical Background
Master List of Audio Reviews

amirm said:
I have been meaning to test I2s so I might do that....
Click to expand...
I did come across this measurement on computeraudiophile from a holo spring, plain USB vs external I²S from a singxer SU-1
lower traces are using Spring USB input, upper using SU-1 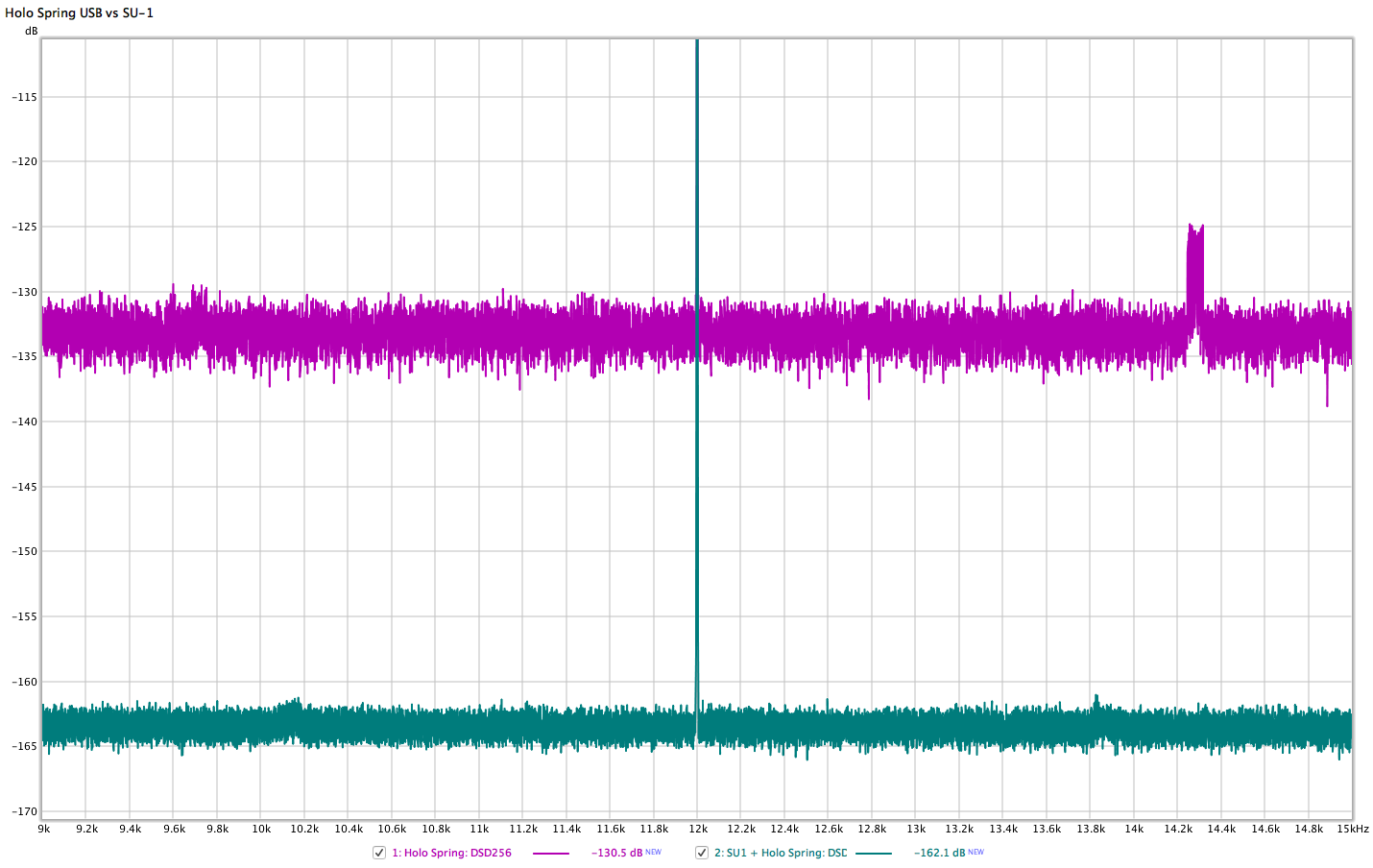 You can see here the spring does dramatically better on jitter than the SU-1. I wasn't sure whether this meant the SU-1 wasn't very good, I²S is a bad interface or the spring USB is just that good...
Last edited: Mar 20, 2019

Amir, don't you have Mutec MC-3+ USB in a queue to complete the list of popular converters?
OP

vitalii427 said:
Amir, don't you have Mutec MC-3+ USB in a queue to complete the list of popular converters?
Click to expand...
I do not. A member had it but has sold it already.
Amir
Founder, Audio Science Review
Founder, Madrona Digital
Contributing Editor, Widescreen Review Magazine
Click for My Technical Background
Master List of Audio Reviews

vitalii427 said:
Amir, don't you have Mutec MC-3+ USB in a queue to complete the list of popular converters?
Click to expand...
Said member lives in Finland so I think he realised shipping back and forth (+import duties upon return?) was a lot of effort/money.

amirm said:
I have been meaning to test I2s so I might do that....
Click to expand...
please do...
all my audio buddies who swear by the singxer, use it via I2s

Veri said:
Said member lives in Finland so I think he realised shipping back and forth (+import duties upon return?) was a lot of effort/money.
Click to expand...
I also have Mutec and not using it since I’ve sold Yggdrasil. But l’m quite far from USA too.

Yep, sold mine already. These interfaces are still needed regardless of the reclocking features. For example I need the USB->AES conversion for digital active speakers and there haven't been that many products out there that do that. Lately there's been an increase, but a few years back, the choices were quite limited.

soundwave76 said:
Yep, sold mine already. These interfaces are still needed regardless of the reclocking features. For example I need the USB->AES conversion for digital active speakers and there haven't been that many products out there that do that. Lately there's been an increase, but a few years back, the choices were quite limited.
Click to expand...
I think the Matrix x-spdif2 as reviewed by Amir is pretty good choice for AES/EBU. At least compared to the more expensive ones..
Last edited: Mar 20, 2019

From the same forum :
https://audiophilestyle.com/forums/...ngxer-su-1-ddc/?do=findComment&comment=589862

Thank you Amir for this good review.