Review and Measurements of LG G5 Hi-Fi Plus DAC/Amp

This is a review and detailed measurements of a bare board LG G5 Hi-Fi Plus DAC and headphone amplifier. As the name indicates, it is an accessory piece for the LG phones to increase performance. However, it seems that it is available as bare board which is sold in Asia for as little as US $20. A member kindly purchased one of these and sent it to me.

The version I have came in a clear case which is much needed given the delicate nature of the two board solution: 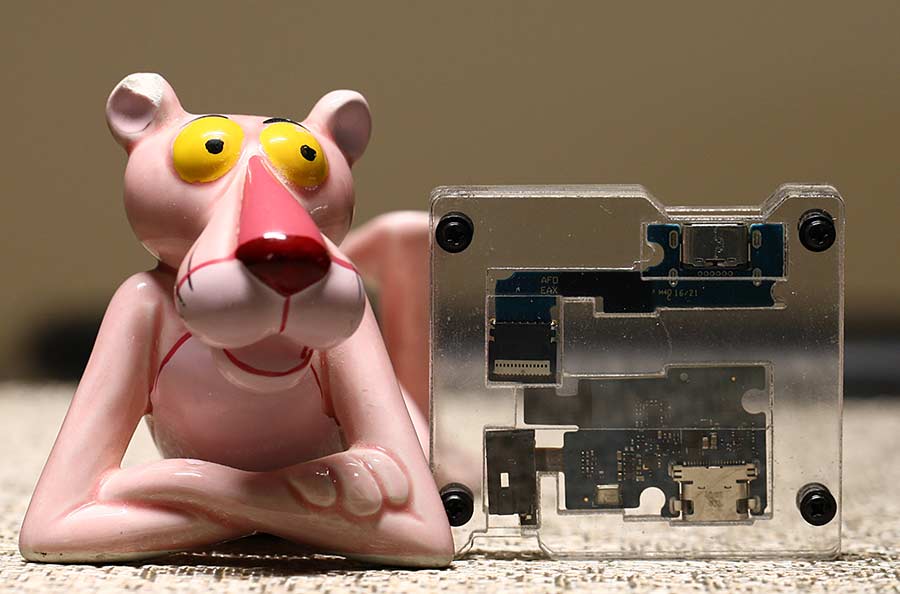 The included case does not do a good job of containing the USB-C connector which moves with ease as the cable moves (not good).

I was unhappy with the cut-out for the headphone jack as it did not allow me to use many of my cables. It requires a skinny headphone plug which fortunately is the case with many modern headphones.

Typical of these devices, there is sensing of the headphone jack to both enable the device to function and also set the output voltage. You have to have something plugged into it or it won't be recognized by the host device.

I was very pleased to see a ASIO driver for Windows including one of the nicest looking control panel. Alas, no matter what I did, I could not get the control panel to recognize the Hi-Fi plus. Windows would recognize it as an audio/video device but oddly, not show it as a list of selectable audio devices. This put me out of business as far as fully testing the device using my Audio Precision analyzer which expects a working Windows audio device.

So for my testing I resorted to Neutron audio player on Android. The app nicely recognized the device and was able to support even 24-bit playback.

In even light use, I noticed the plastic case starting to warm. Together with this, the output dropped progressively. The best I got initially was 1 volt which is less than what others have gotten (1.9 volts). But that was temporary as the device proceeded to drop to 0.9 volts. Later in testing with low load of 33 ohm, the output dropped much more to just 0.3 volts. Whether that is due to high output impedance or protection circuit, I don't know. I understand some versions of this board come with a metal case. I highly suggest that option over this plastic one.

Audio Measurements
I played my 24-bit, 44.1 kHz Sine Wave tone from my Android phone through Neutron app and got this: 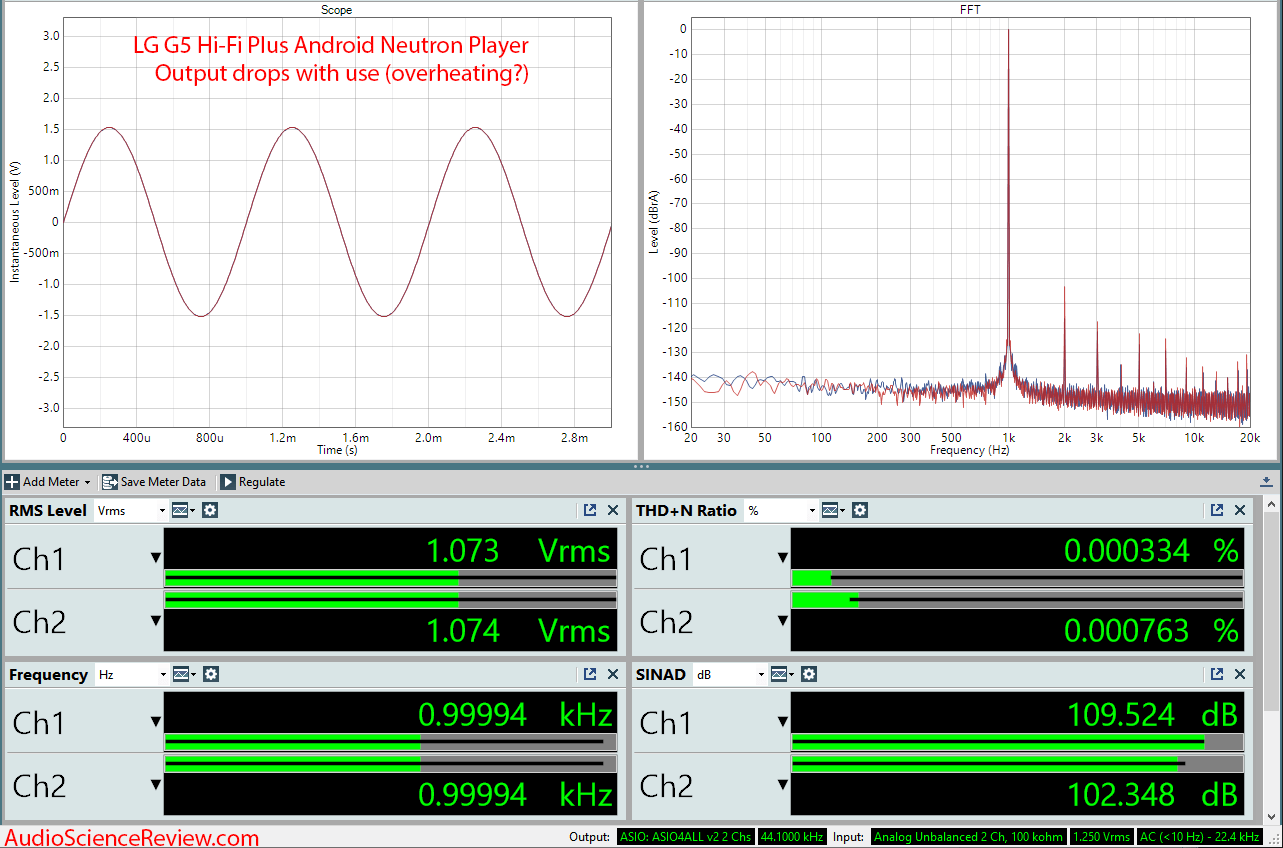 This was with no load on the device (as I typically do for DAC testing). If Channel 2 was as good as Channel 1 at 109 dB SINAD, that would be exceptional. Alas, it is not so I averaged the two and got 106 dB:

The LG G7 I tested got a SIAND of 105 dB so this is not much improvement over that. Of course if you use this dongle with other phones like my Samsung S8+ used in this testing (SINAD 89 dB), you get quite a boost in distortion and noise.

Next I ran my jitter test: 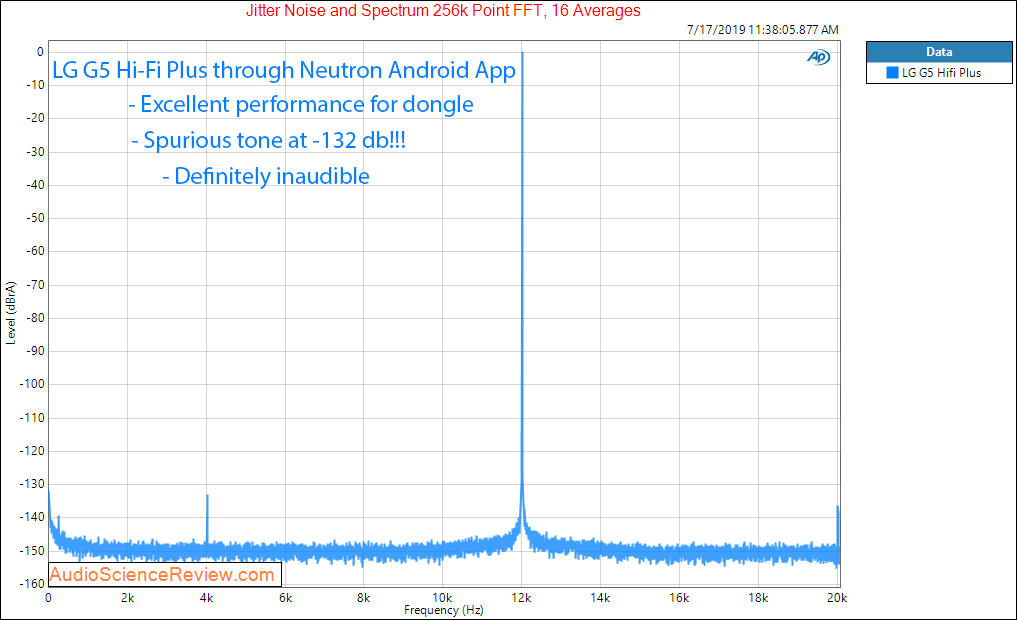 Wow, this is very clean! It shows how little some companies put in design when they get super noisy spectrum. Most dongles don't do this well.

Lastly, I ran an old test with -90 dB sine wave to see if the device can resolve such a small signal correctly: 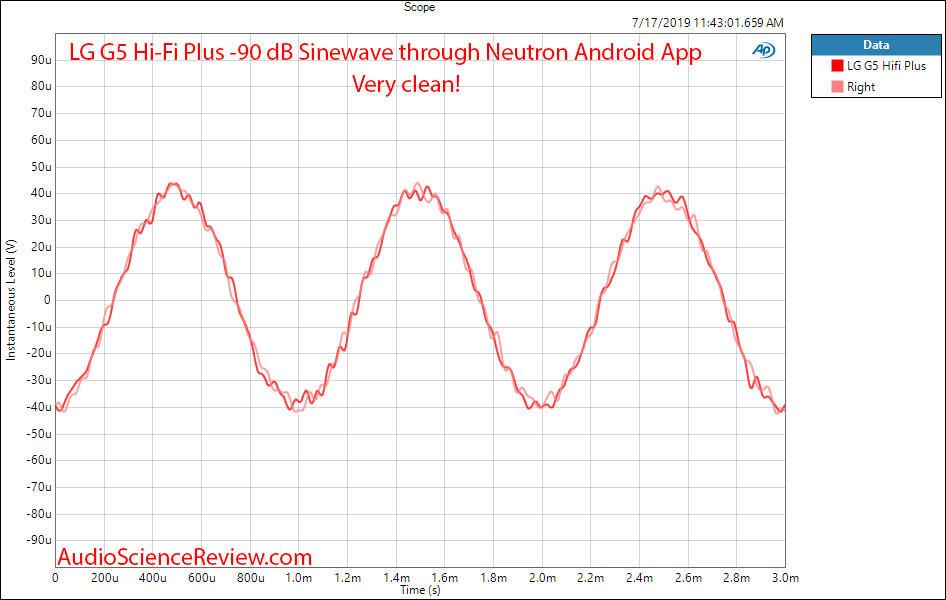 The sine wave is nicely resolved with just a bit of noise which is normal.

Listening Tests
Stuck with low output level, I started my headphone testing with my closed back and sensitive AKG K92. I was forced to listen at or near max volume but what was there was quite pleasant. I did get some clicks on one of my music files but not sure if this is a player issue or not. On other files, the results were fine.

I next tested the unit with KZ ATE Copper Driver IEMs. I was surprised that levels were quite low. No doubt the low impedance had forced the unit to cut down even more in power. So again I had to listen at or near max level. Doing so on well recorded material sounded quite nice.

Conclusions
We couldn't run our full suite of tests on the LG G5 Hi-Fi Plus but what did run, showed excellence in design. We have a low noise, and low distortion dongle here.

I am not a fan of what I received in the form of this clear plastic packaging. The metal ones may be better. And if you can get the unit to output higher levels, then you could be set with a very high performance dongle. As it is however, it is too much hassle for me to recommend it.

Get this: one of the panthers is begging me for plastic surgery. I can't tell you what organ he wants enhanced but I let you guess. Putting aside that I can't even find a plastic surgeon for panthers let alone one that performs such operation, lots of cost will be involved in it for sure. So please donate generously using the links below. Help him get his self-esteem back!

Thanks for the review!
OP

Just got it to work through Roon on Windows 10. Alas, performance is much worse than Android: 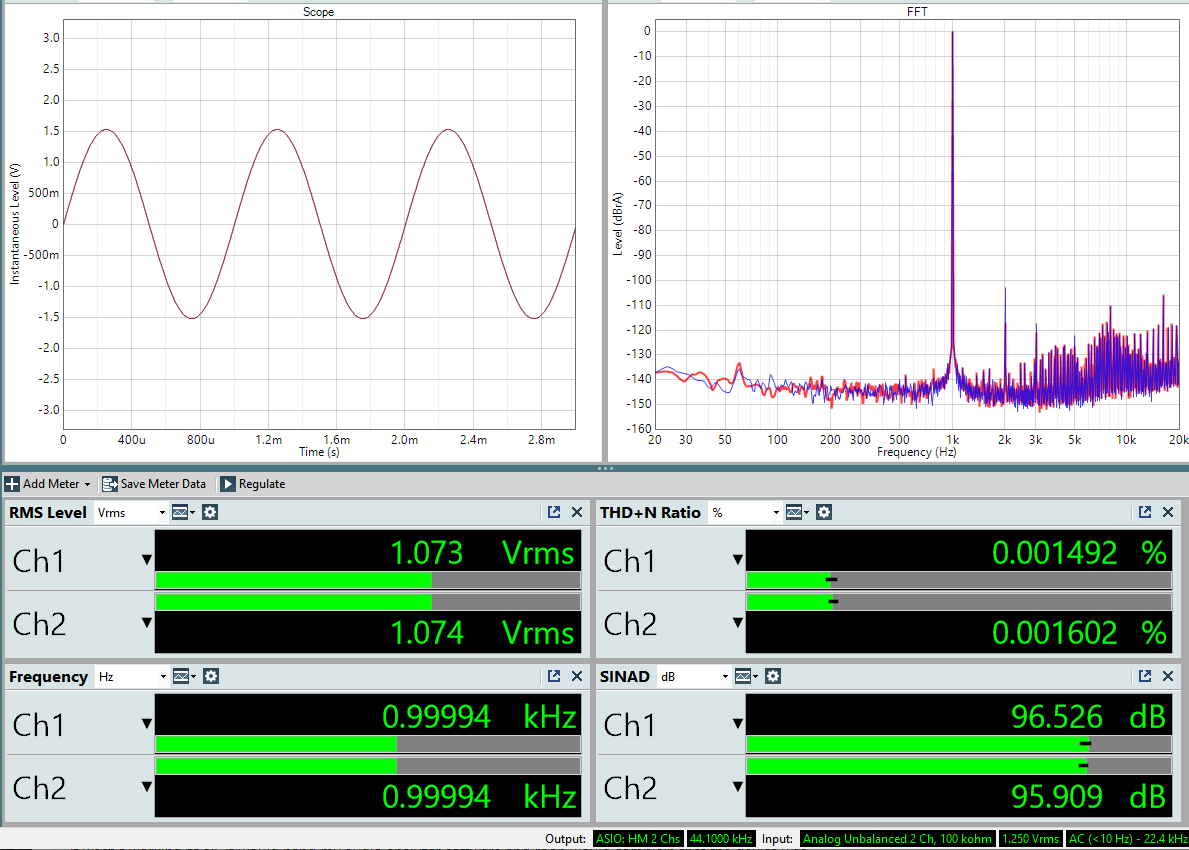 Seems like it is limited to 16bit? And if the test could be done without ASIO driver? Or could the settings on the ASIO control panel change something?
OP 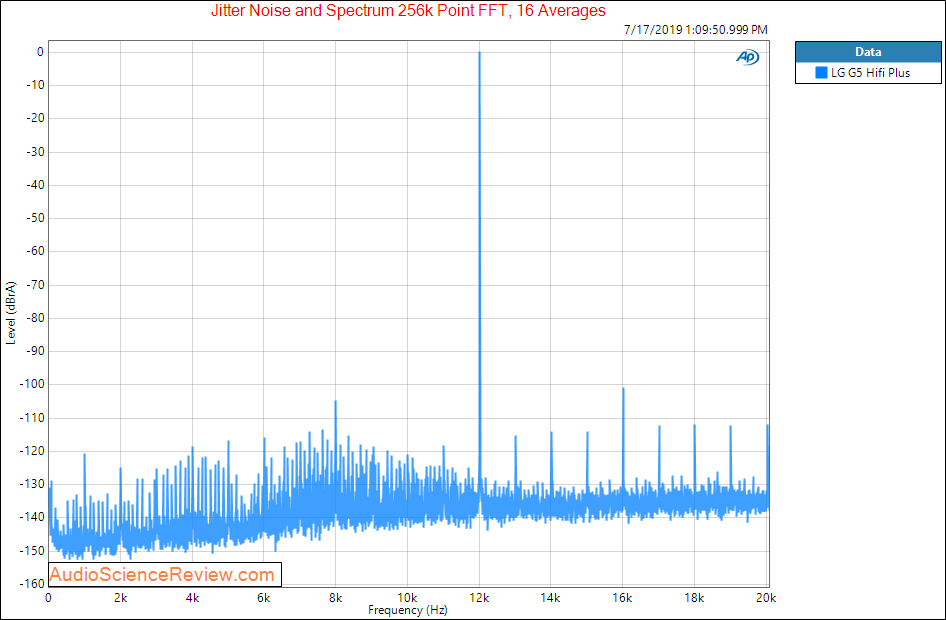 rainbaby said:
Seems like it is limited to 16bit? And if the test could be done without ASIO driver? Or the settings on the ASIO control panel could change something?
Click to expand...
16 bit usually shows up with series of 100 Hz and harmonic tones. That is not the case here.

You can see the background noise with nothing playing: 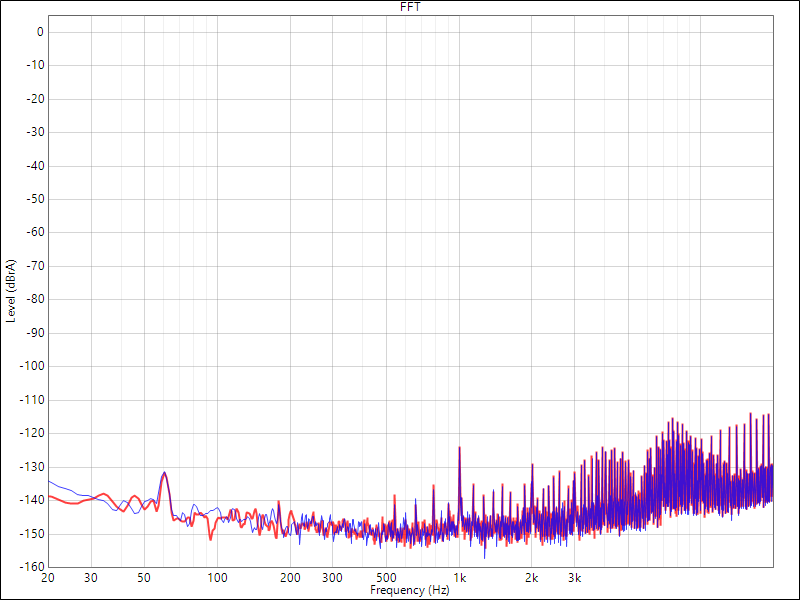 Will the result change if set it to 32bit on the panel?

rainbaby said:
Will the result change if set it to 32bit on the panel?
Click to expand...
Changing that setting made no difference.

U: Okay got it, so could an USB isolator improve the result?
Click to expand...
It might but then you are raising the price.
Amir
Founder, Audio Science Review
Founder, Madrona Digital
Contributing Editor, Widescreen Review Magazine
Click for My Technical Background
Master List of Audio Reviews

amirm said:
Changing that setting made no difference.

For $20 that is a pretty amazing piece of gear. Thank you for the review.
Intro and System

gene_stl said:
For $20 that is a pretty amazing piece of gear. Thank you for the review.
Click to expand...
Yeah but an USB isolator could cost another $10 (in my place), if you want to use it on PC and get the performance similar to mobile.

I have the retail version of this amp/dac is the second one I bought. Cost me 50 dlls on Ebay. At 30 percent in windows the Sennheiser HD600 sound loud enough for me (but I think that I am a quiet listener). The Philips X2 doesn't sound so loud at the same 30 percent, which surprised me, maybe the amp is current limited. I have not tried my HE400i (I like your listening notes because I have those same headphones as you). The retail version is all plastic, but also gets warm.


Funny enough I bought it to use it with my LG G5, the stock jack on the phone is pretty quiet and overall bad, many headphones didn't even sound correctly like my k3003i which keep cutting and had some static. I end up buying an S8, so I sold the G5 before I got the DAC/AMP. Once I got the amp/dac, I asked the person that I sold the phone to test the lg friend and it didn't work because the phone is an American model, and the dac was not officially released there. Still I keep it because it is pretty compact and sounded better than my work station at work.

Where can I buy this board? It might be a good pairing with the Topping NX3.

I agree with Neutron Music Player. I have used it for years, although I rarely listen to music from the phone, except when I have to wait. It is a very good soft player. The best of all that I tried in his day. Music format: Ogg -q9 from FLAC to save space.
"Comment is free, but facts are sacred" - C. P. Scott
OP

Silou said:
Where can I buy this board? It might be a good pairing with the Topping NX3.
Click to expand...
I have only found one at high price: https://www.amazon.com/Main-Board-Motherboard-Lg-G5/dp/B0742Y5ZZ1

It is listed for much lower prices in China websites but I can't search them to find it.
Amir
Founder, Audio Science Review
Founder, Madrona Digital
Contributing Editor, Widescreen Review Magazine
Click for My Technical Background
Master List of Audio Reviews

I found one on Ali with a nice looking case
https://s.click.aliexpress.com/e/bc5tLGN2

Silou said:
I found one on Ali with a nice looking case
https://s.click.aliexpress.com/e/bc5tLGN2
Click to expand...
That looks pretty nifty

Silou said:
I found one on Ali with a nice looking case
https://s.click.aliexpress.com/e/bc5tLGN2
Click to expand...
If that works as it should .... then we may have a new price / performance champion ??