New member alert! After several months of reading the forum, I thought it might be a good time to join and introduce myself with a review of my own - perhaps someone else will find the information useful. It also seems like a nice way to document my work and exchange thoughts with the many knowledgeable members here.

The device in question is the Denon RCD-N9 (Ceol) mini stereo system:

Back of the unit (with measurement equipment connected):

We've selected this mini system to power our living room system a few years back due to its small size, convenience and support of various inputs and formats including streaming, internet radio, AM/FM tuner, CD optical and analogue inputs etc. Basically it seemed like an all-in-one streamer, receiver, DAC and 2x65W (@4Ohm) amplifier solution. This was originally powering a set of cheap passive speakers and all was well

However a month or so ago we decided to go for a better set of speakers and decided on a set of Revel M16s (ASR definitely had a hand in our pick of the top contenders ). Turned up slightly I started noticing some looseness or muddiness in the ~100kHz area that I had not heard auditioning the speakers. Naturally, my first thought was that this was probably caused by a room mode, maybe even facilitated by the M16's bass hump. This also motivated me to do some basic measurements on the Denon.
Note: Latest version of Denon Ceol is RCD-N11DAB, but based on the info I found online it seems that the basic amplifier section hasn't changed much since at least the N7 version and N10 seems to use the same amp chip too, so some parts of this review may be relevant to other devices in the series.

One of the first things I did was to measure the frequency response with the amp loaded with resistive and complex (speaker) loads. The result is: 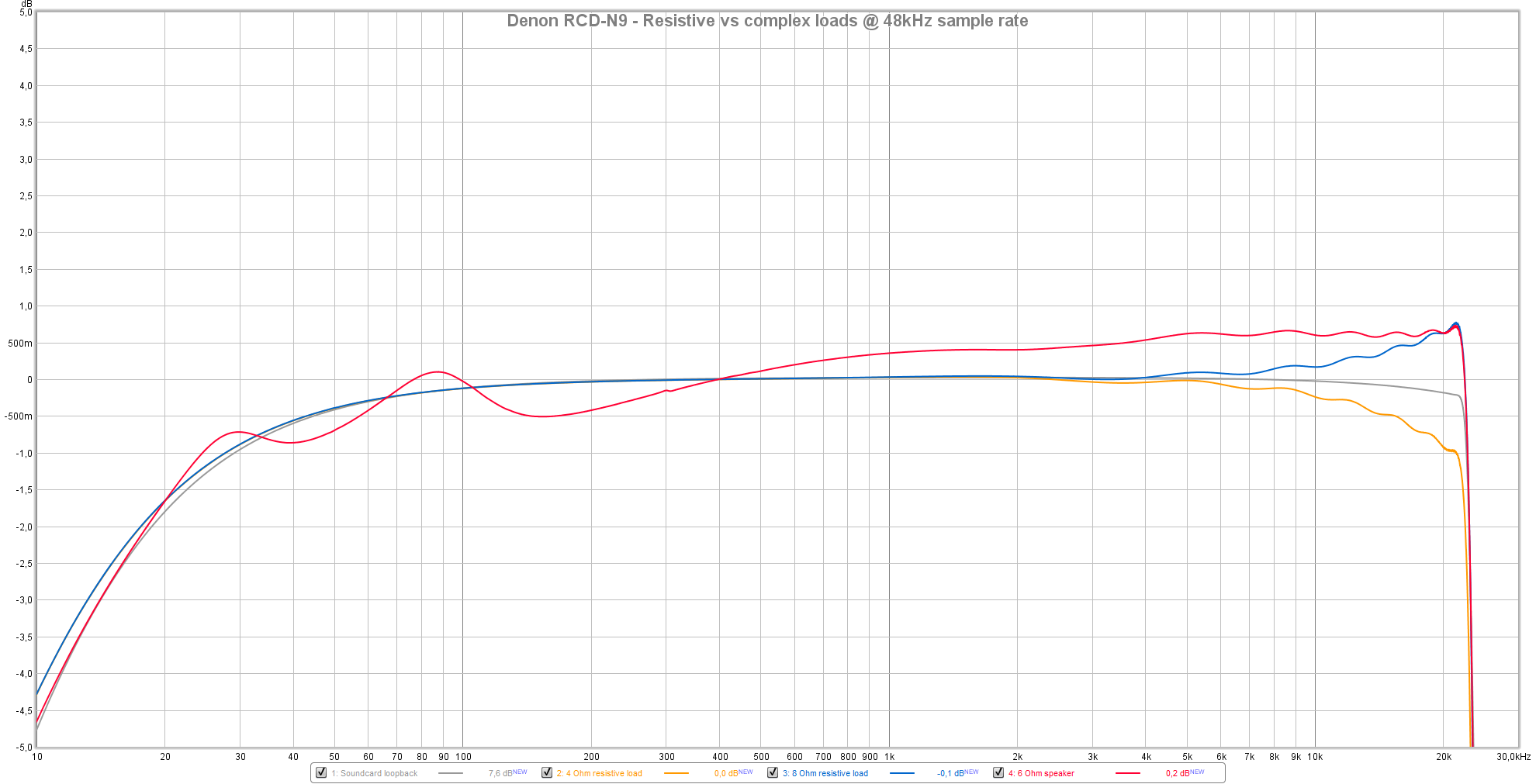 As you can see, the variation in response is >1dB, wide-Q, with peak and dips around the speaker's (Revel M16) impedance resonance frequency @~85Hz. For comparison, you can see sweeps with 4 and 8 Ohm pure resistive loads, and the soundcard baseline loopback response (which accounts for the low frequency roll-off).
Notice that the amp's high frequency response >2kHz is modulated by the load - likely caused by the output impedance/damping of the amp.

After some Internet investigation, it seems that this series of amps uses the TAS5142 digital amplifier (powered DAC). Looking at the chip evaluation version user's guide we can find the following:

This implies output impedance of ~0,667 Ohms @ 1kHz and is of course terrible. Same document shows high frequency behaviour in line to what was measured above: 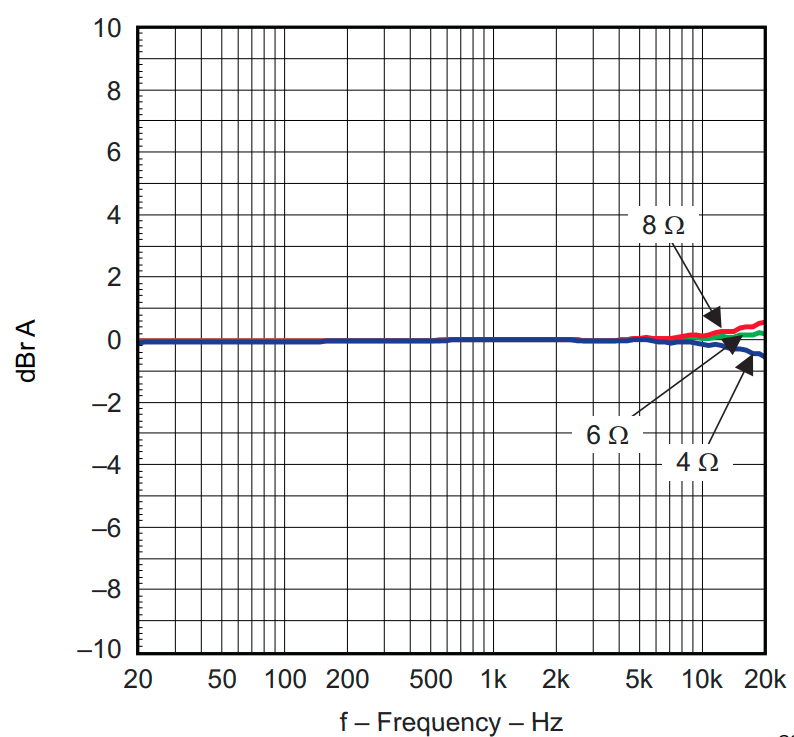 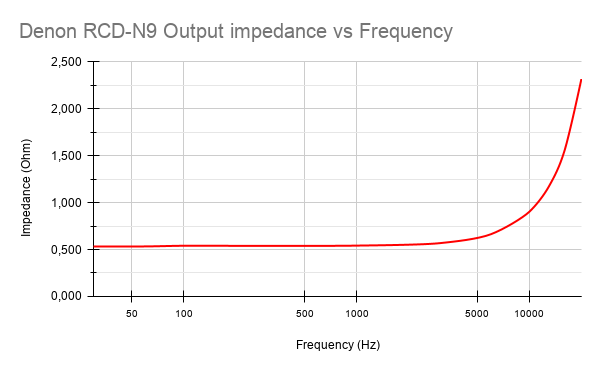 As you can see, this is only slightly better to the info from the user guide, resulting in <2kHz output impedance of ~0,54 Ohm (but rising all the way to ~2,32 Ohm @ 20kHz!).
Note: Similar output impedance performance is independently measured here in a relatively similar device - Denon PMA30.

The following tests were done via Denon's optical input, with the device volume set to 45 (out of 60). Level was then controlled in SW with the REQ generator. This is because there is no analogue volume control and at 0dBFS output Denon starts to show signs of clipping with volume set around 37-40. I didn't bother to test the analogue input as it is digitized (I believe at 48kHz sample rate).

Moving on, I measured the SINAD @ 5W power output into 4 Ohms, one channel driven (as I have only one 4 Ohm dummy load ): 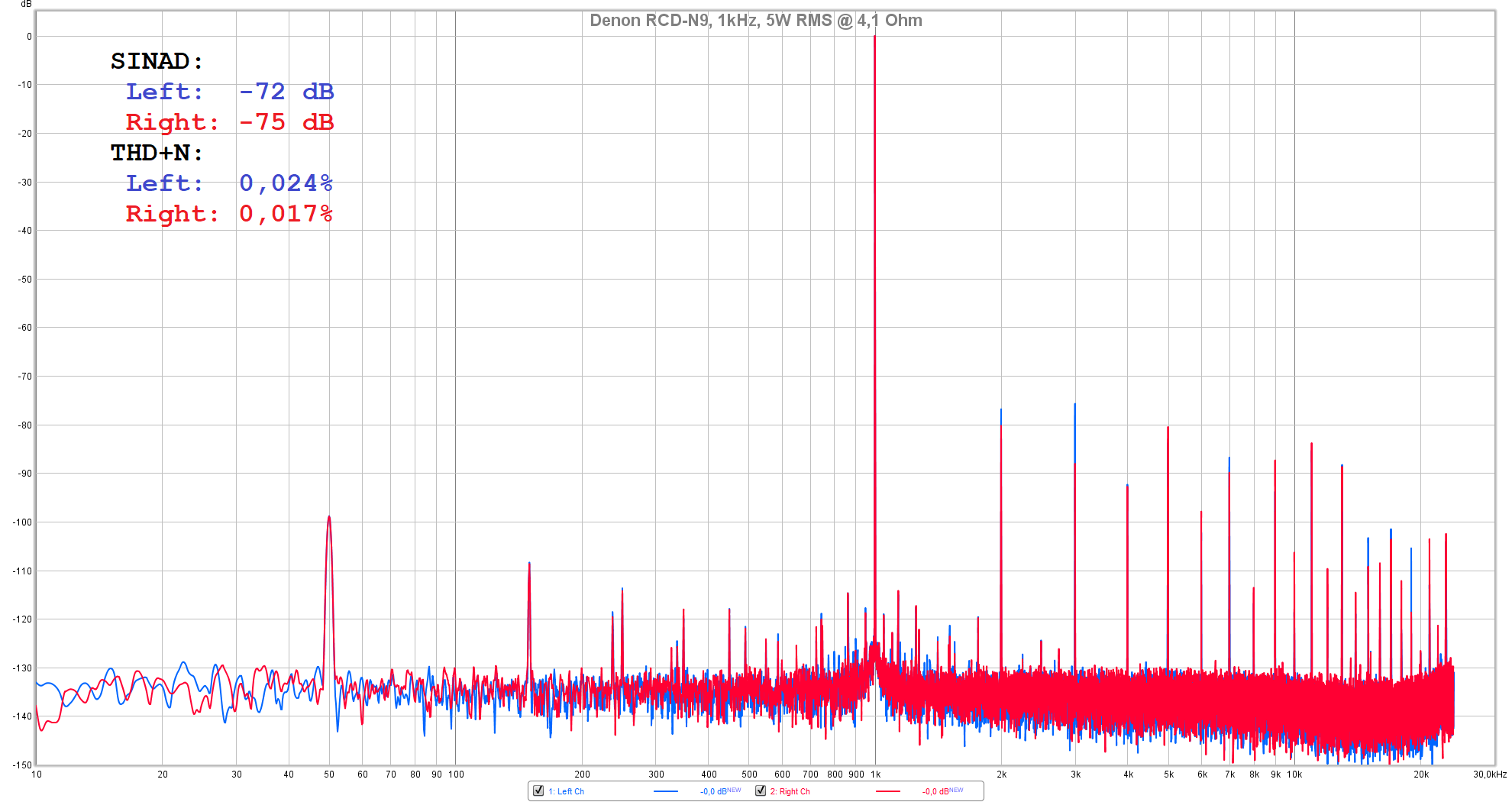 With one channel driven into 4 Ohm resistive load we get to about 65W output just before clipping onset, with 1% THD+N at around 70W output. As you can see, THD+N becomes distortion-driven already above ~0,2W output: 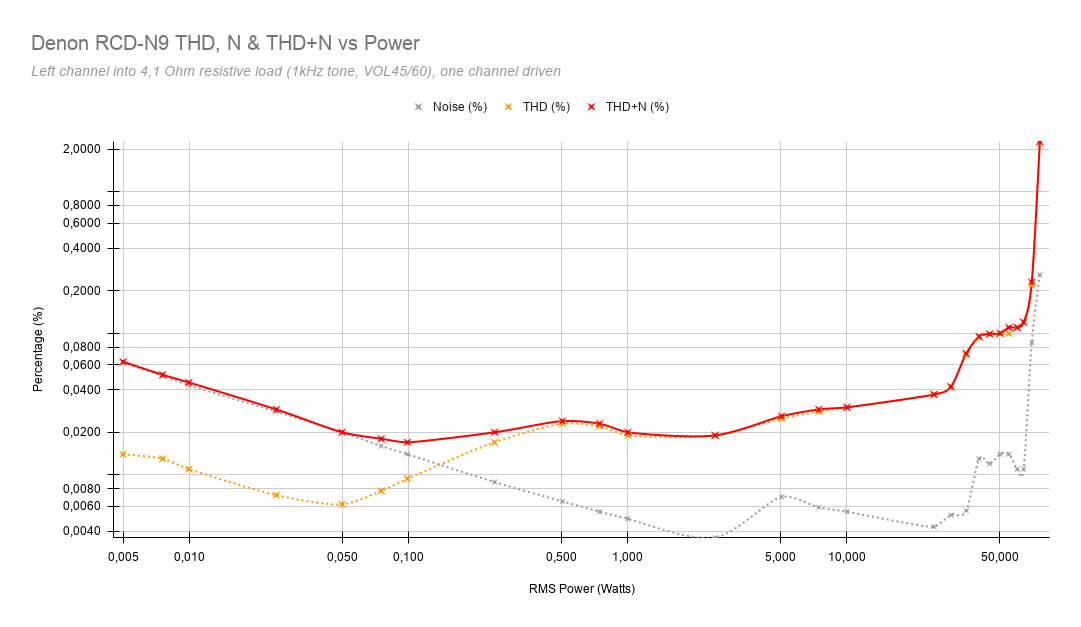 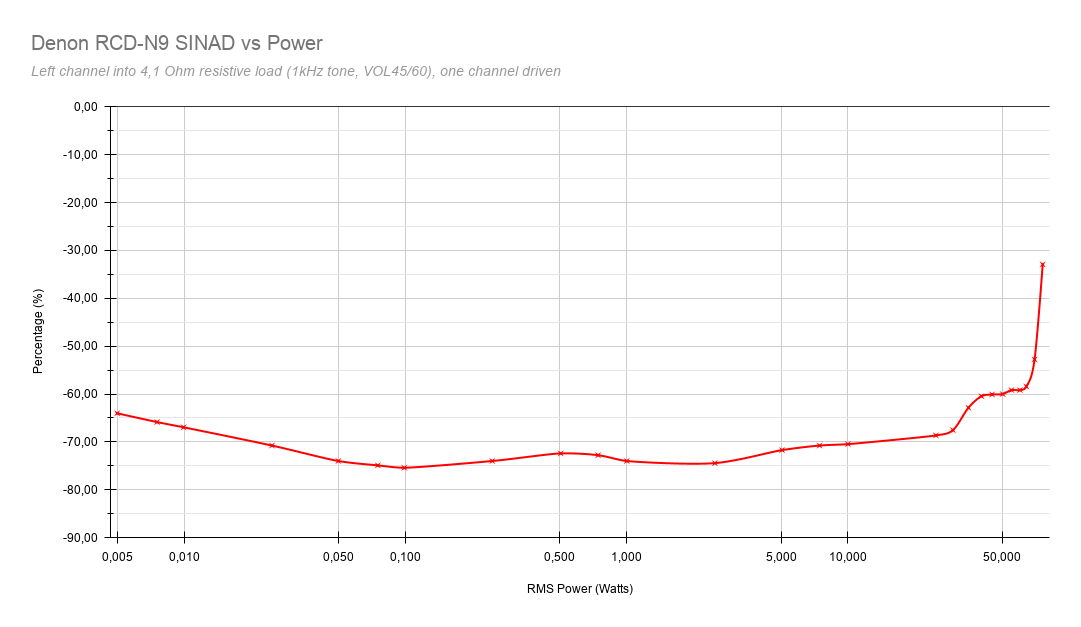 Compared to the data in the amplifier chip datasheet and the user guide referenced before: 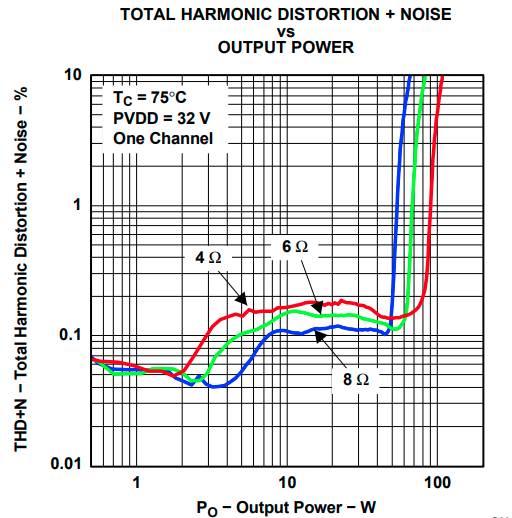 It seems Denon may have made some improvements in their implementation with regard to distortion performance - maybe due to use of lower voltage on the power supply and therefore slightly lower power output? RCD-N7 service manual seems to suggest 29V is used instead of 32V from the above datasheet example. 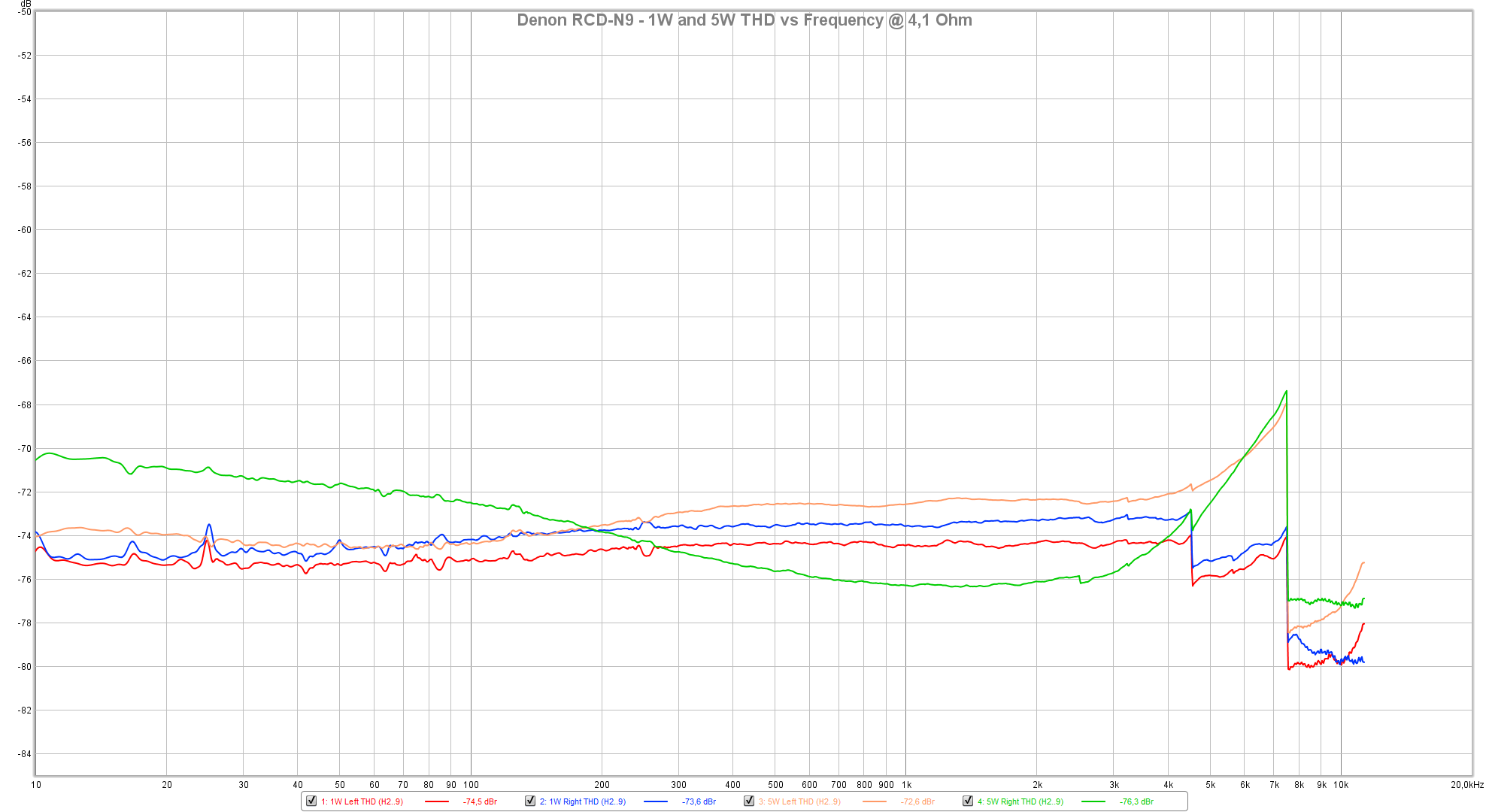 So we get about 40W of power into 8 Ohms, with the sum of distortion and noise getting worse by about 5 dB if we drive both channels: 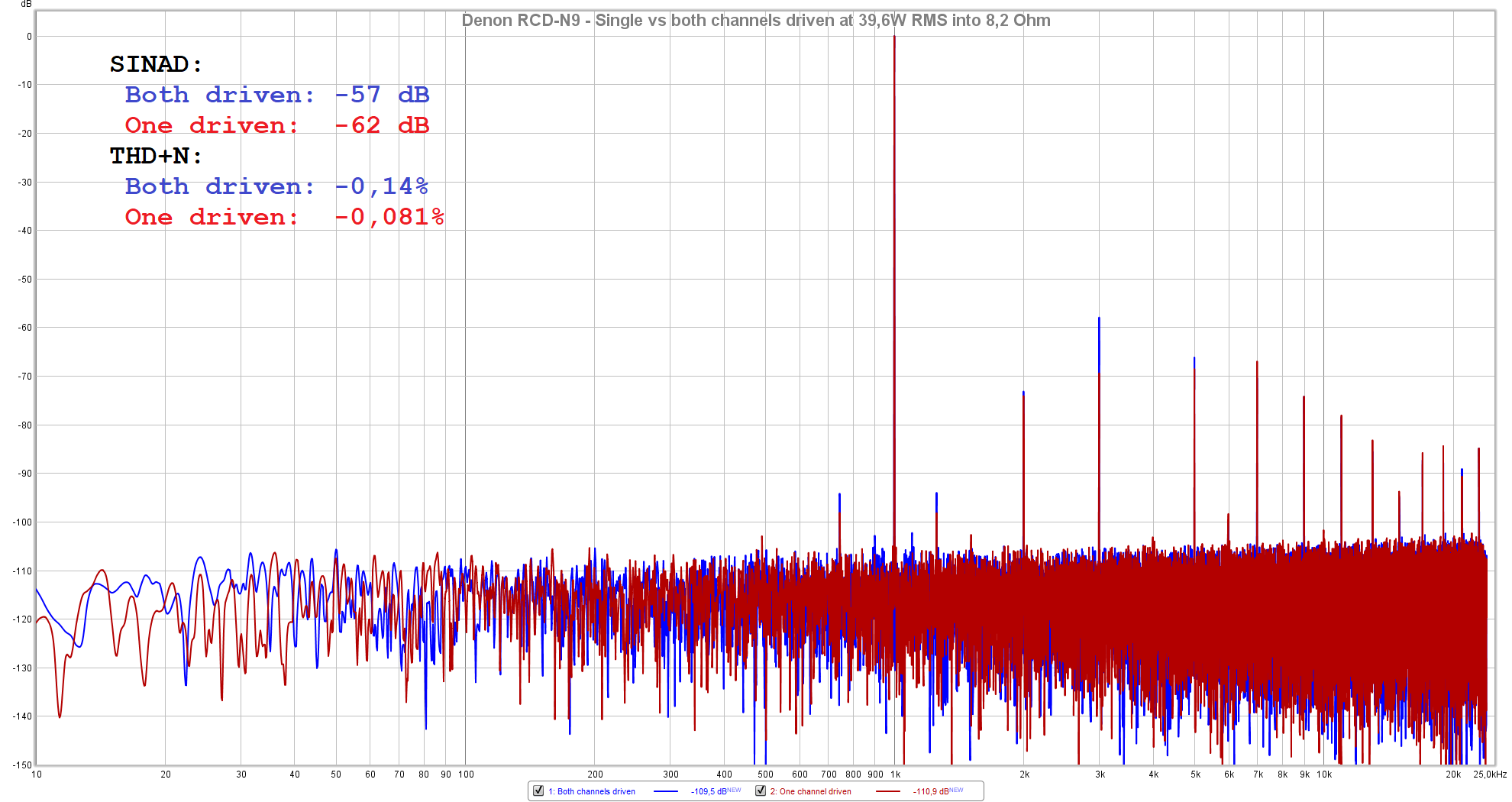 I will not qualify overall device performance based on these measurements, but I will say that I definitely hope to test my speakers with an amp with higher damping factor - in hope to quantify influence of damping vs room response on my perception of the in-room bass response.