A few days ago, someone in a QQ Group said, "Recently, a new R2R decoder called Pegasus has been released, which is very cheap." I think to myself: Don't use Soekris's DIY products again, right? Then I went to Taobao and found this product. The first impression was: Hey, this design is quite interesting! And after Google, I found that the internal circuit design is different from the R2R I tested before. Hmmm... The new power of ChiFi? Then we have to find a way to measure it! After an inquiry in social relations, a friend finally had a machine willing to lend me a measurement!Today, it arrived: 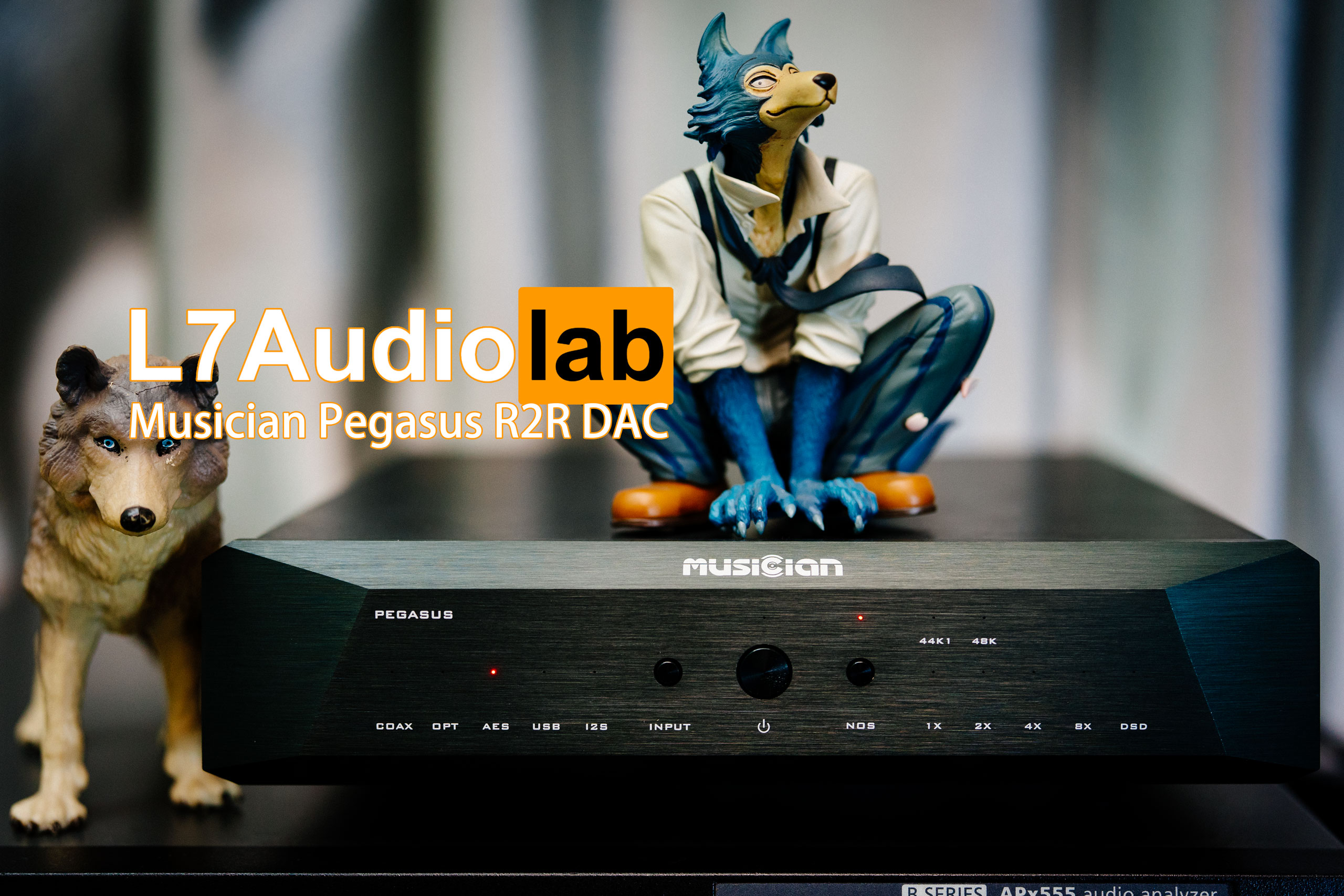 Overall completion is very high! Chassis workmanship value for money! There are enough input ports. The main disadvantage... is that there is no remote control... Emmmm... it will be a bit inconvenient...But I found an interesting place... Is the AC of this device a global voltage? No need to switch? That's not right... The internal map I saw earlier on Google clearly used an O-type transformer? No, I have to look at ...... open after obtaining permission disassemble ...... I took it apart: 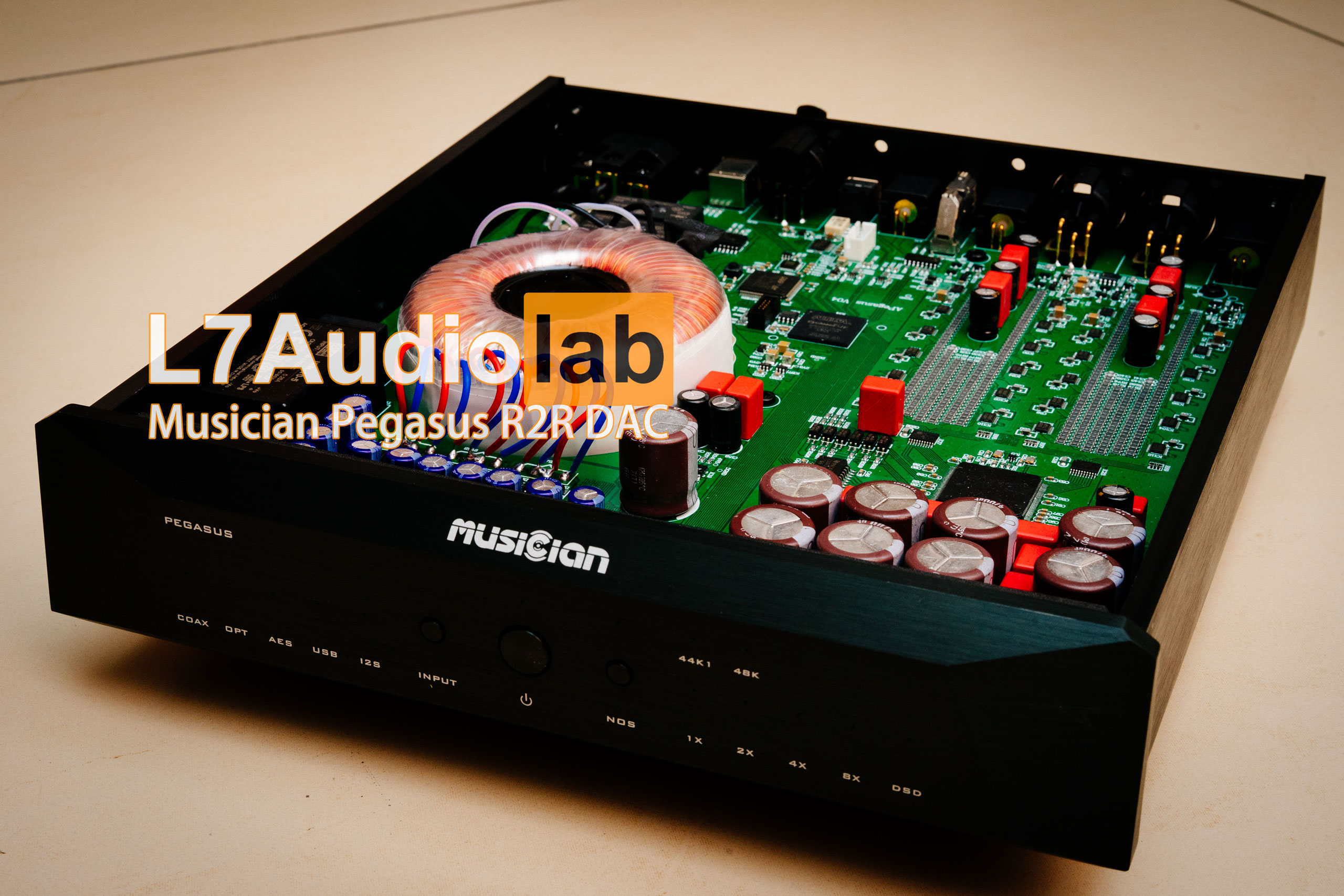 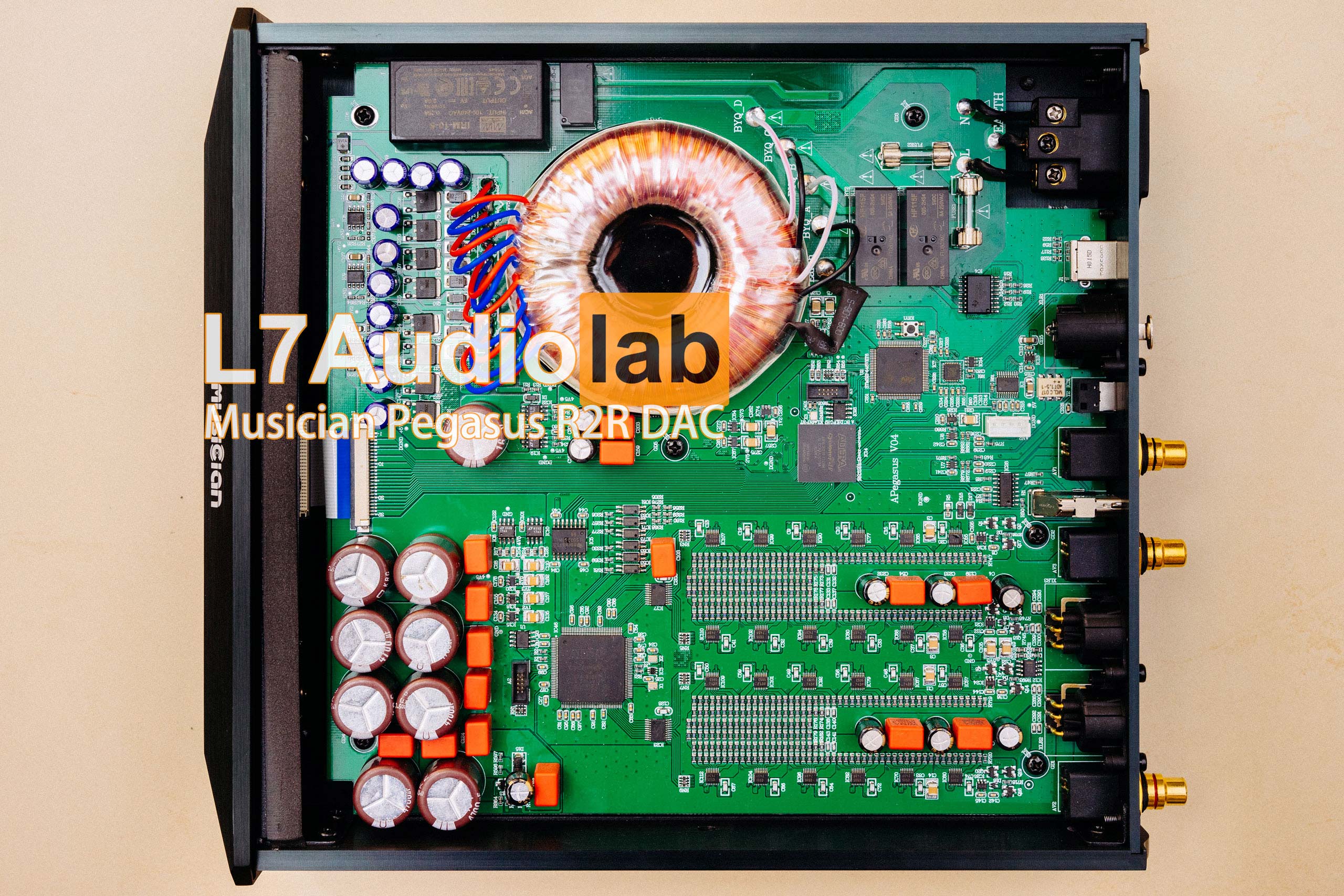 A brief look at the circuit, the Mingwei switching power supply in the upper left corner will be turned on at the first time of 220V input, and then through the detection circuit to determine whether it is currently 220V or 110V input, the main control circuit will then select the corresponding relay to determine ON mode transformer winding ...... Emmmm very good design!It reduces the possibility of malfunction caused by someone dialing the wrong rear voltage switch, and also reduces SKUs, praise!However, there is still a small detail that can be improved as a whole: I hope that future machines of this brand will work hard on the magnetic shielding of the transformer. The current layout should still be able to see the effect of magnetic leakage in the measurement (though in fact, everyone It's almost the same... I'm nitpicking) 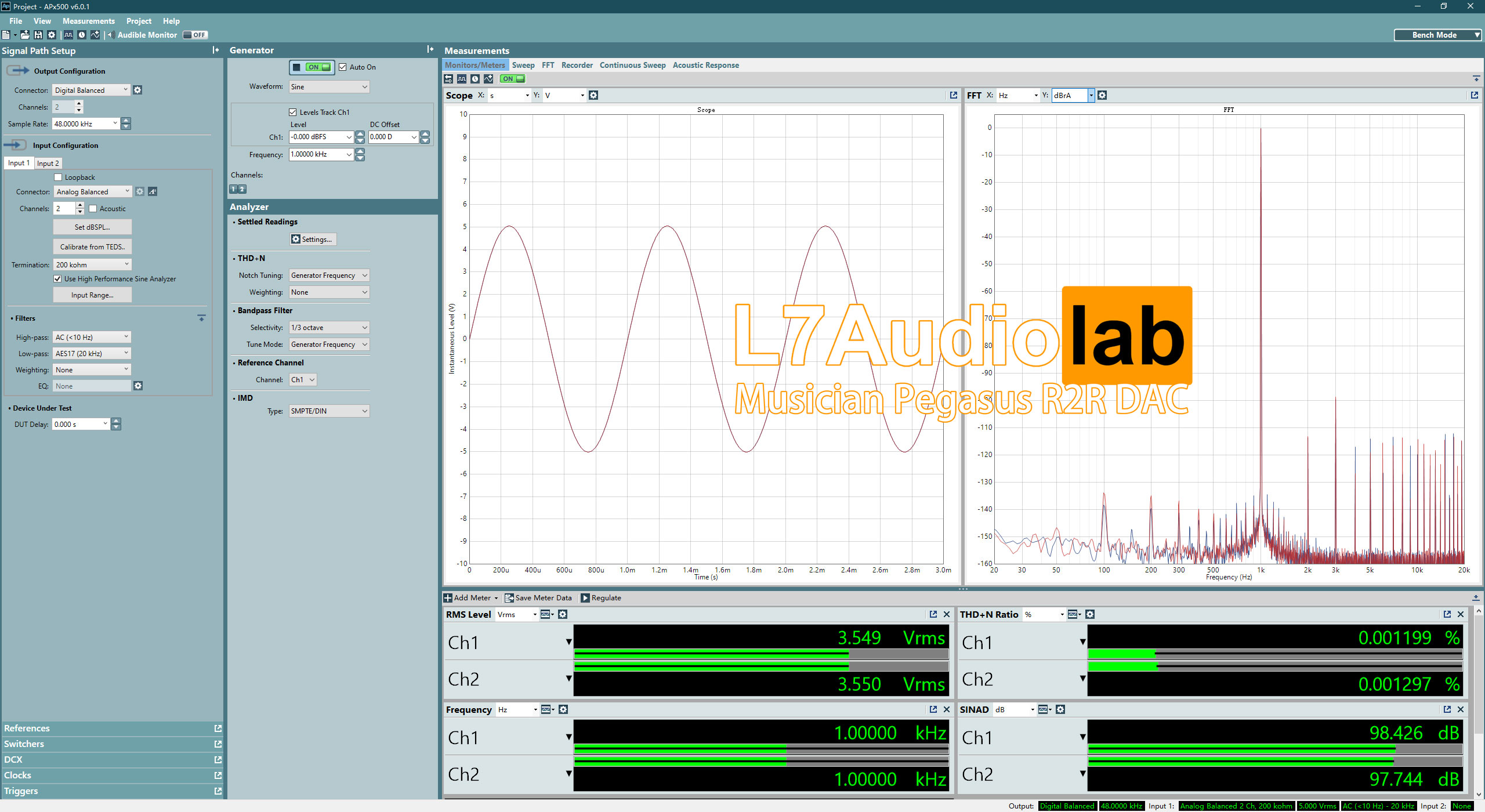 The XLR level of 3.55V... It will be a bit disadvantaged when comparing equipment (the volume will be lower), but the overall performance can be said to be pretty good in the discrete R2R! It obviously surpasses the devices like D1000 and AudioGDR8 I have measured before. Although there is still a gap with HoloAudio's R2R, this is an entry-level product. Well done Musician! Well done! 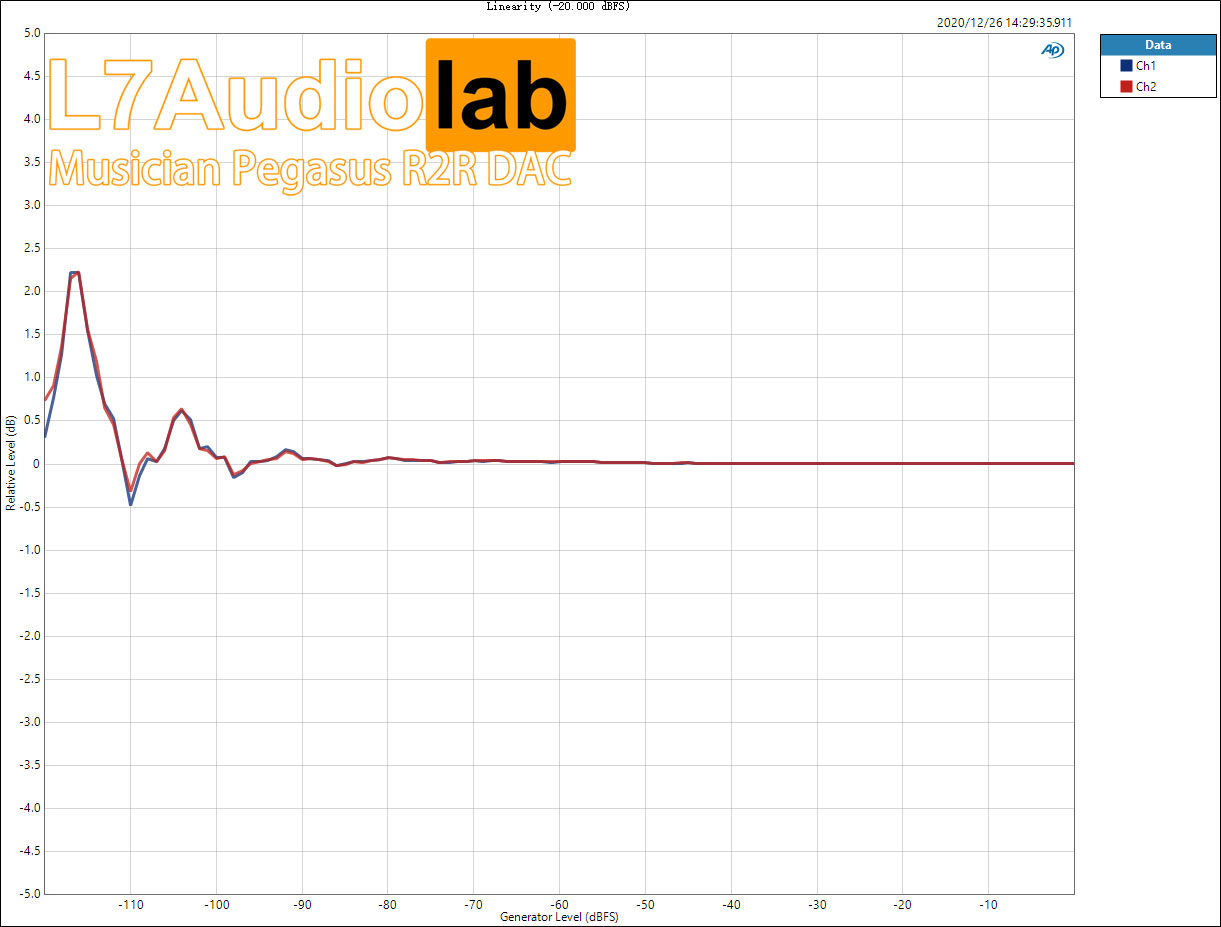 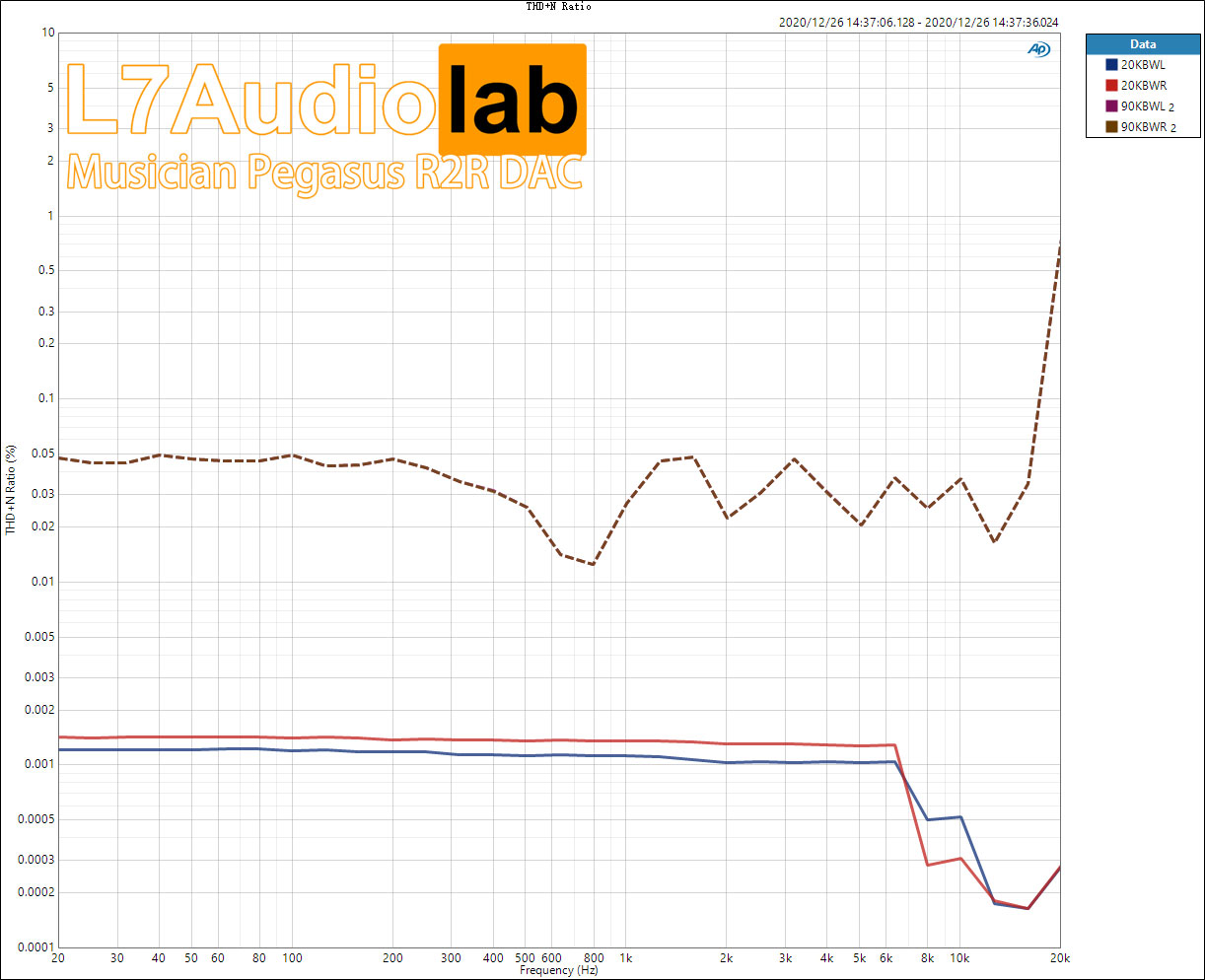 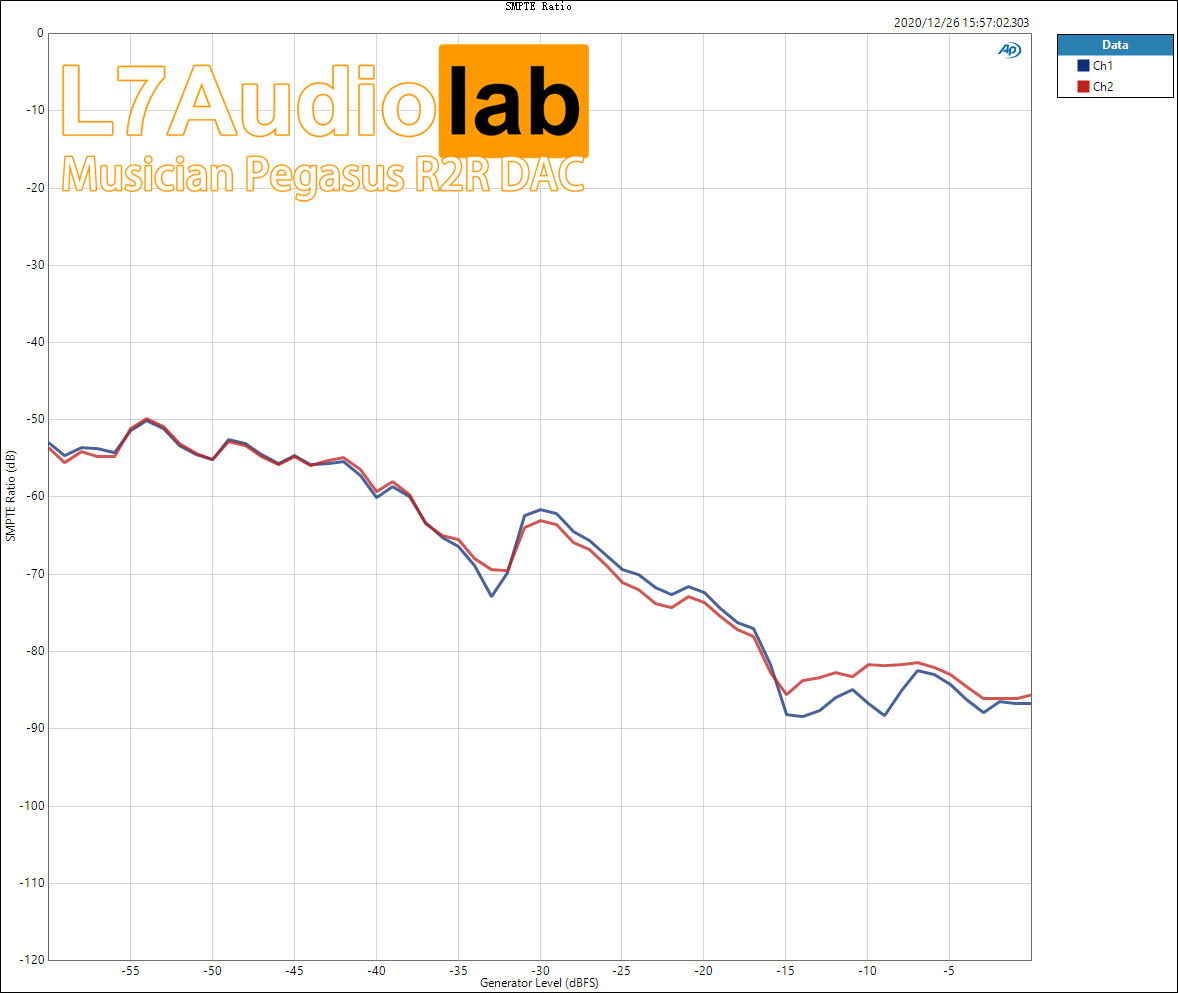 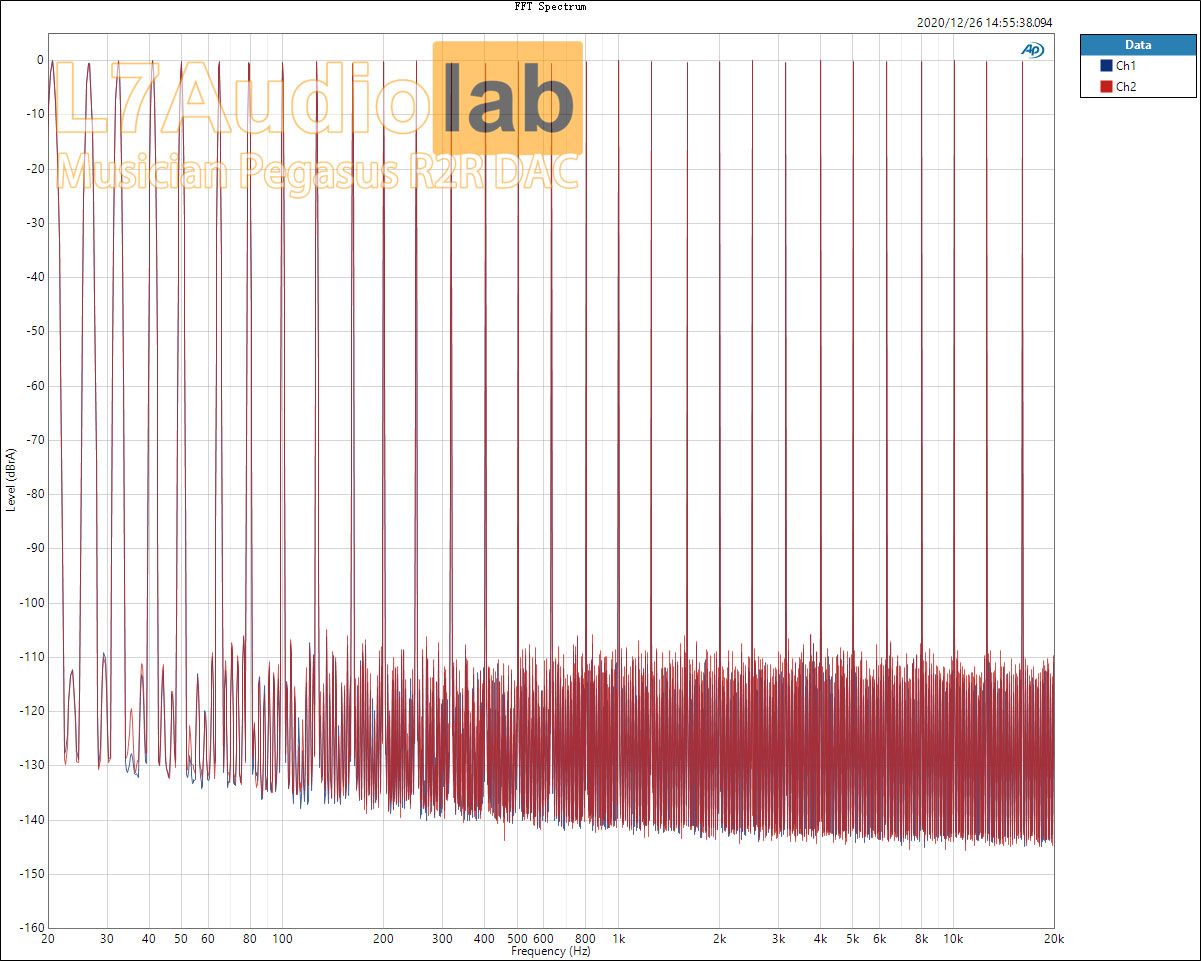 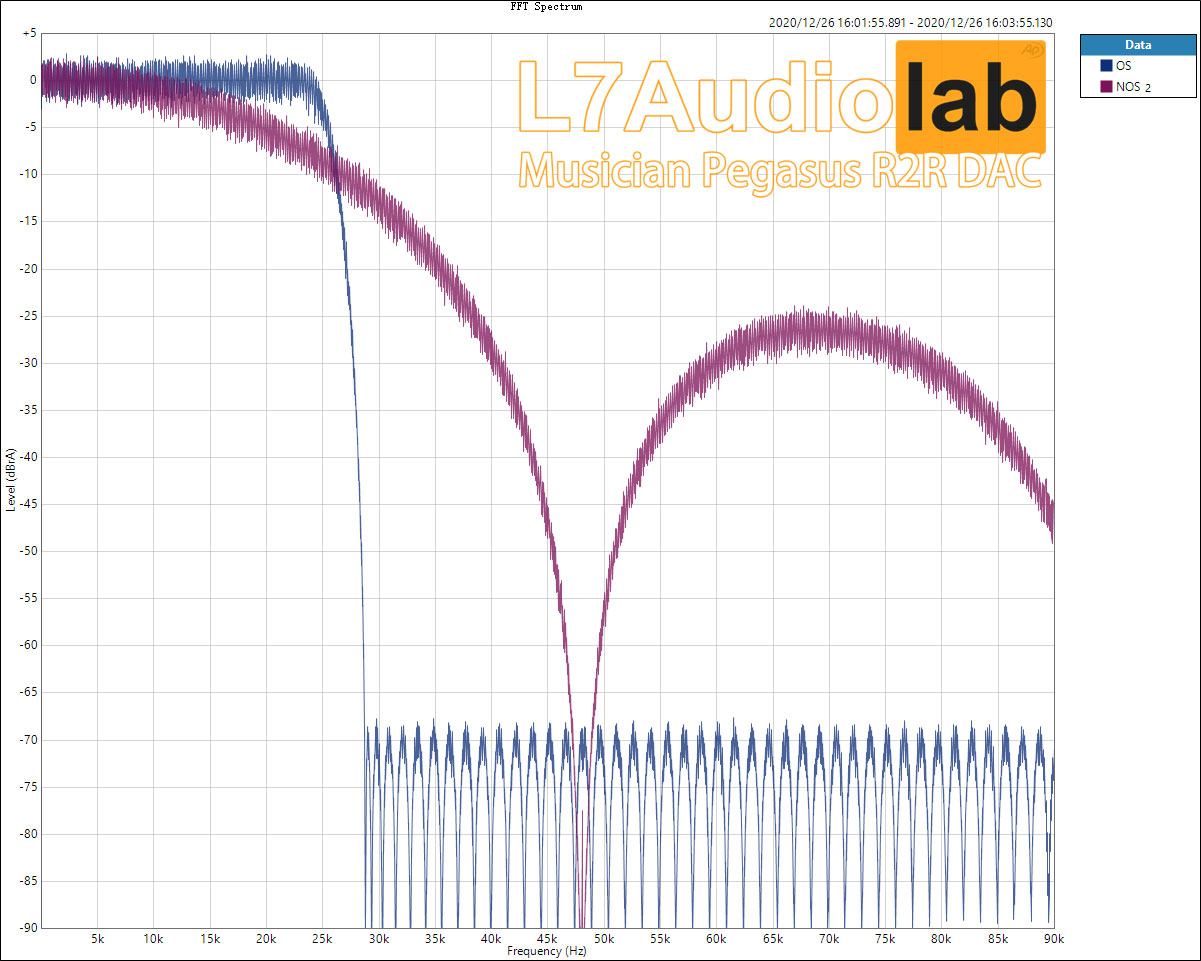 Summary: In this price range, there were really no outstanding products for discrete R2R before. What's commendable is that the Pegasus has also made some good designs, and the chassis makes people feel ecstatic. I even think that if the decoding of 4499 is put on this shell, the price will be sold beyond the price of this product... Personally feel that it is really full of sincerity... As a new force in ChiFi, I think Musician will continue to follow this trend... ...The future can be expected.
The truth is within the measurement range of APx555B

What does it cost though
OP

Tks said:
What does it cost though
Click to expand...

1100USD？
The truth is within the measurement range of APx555B

There were rumors this was a Denafrips Ares OEM clone. Looks like Ares II as measured by Amirm is still quite a lot better though, it's actually cheaper too! Thanks for the review, @WolfX-700

It's actually pretty common to see with these matched resistor ladders they tend to drift off a little.

Looks like the sampling rate is either 44.1k or 48k - does it downsample rates above this? Looks like high quality, and I see they 'borrowed' my 120/240V AC voltage automatic switching idea.
Electronics hardware and software design engineer for a leading manufacturer of high end audio power amplifiers and preamp/processors for home and professional cinema use. We manufacture our own branded product lines and are a large ODM/OEM manufacturer.

Hello Wolf. Have you measured SMSL SU-9 yet? would be interesting to compare it to Gustard X16, and Soncoz SGD1, both also ESS based DACs around the same price but all use different ESS chips and implementations.
M

Thanks for the review, @WolfX-700. I'm fascinated by these R2R designs.
A

MakeMineVinyl said:
Looks like the sampling rate is either 44.1k or 48k - does it downsample rates above this? Looks like high quality, and I see they 'borrowed' my 120/240V AC voltage automatic switching idea.
Click to expand...

the multipliers below are how it communicates the frequency; when receiving a signal 2 LEDs are on.
V

Something to tell about the Musician Aquarius (new DAC from Musician):

More info on this DAC

not only aquarius, now there is also Draco (always R2R)

Yes, but nothing about the SQ of the Aquarius?
D

I think Wolf had a cold-run test like we had seen on Sabaj D5. Pegasus should perform near or better than Ares 2

After nearly one month of use and comparisons, I am about to - regrettably - return the Pegasus: it sounds great but does not have a margin above the Topping D70S.

The Pegasus sometimes has a more "pleasant" (rolled off ?) lower treble and, on some music, a smoother presentation (less impactful transients ?). But, with music requiring a more energetic and / or detaliled presentation, compared to the D70S the Pegasus can sound "boxed".

I cannot explain why, the Pegasus shows issues with some female voices in the 400 - 800 Hz region, which sound a little bit "disembodied" and "colored". I can't rule out faults in some of the myriad components inside my unit. But the Denafrips Pontus I behaved quite similarly (Patricia Barber most affected).

But, other than that, quite a relaxing listening. Sometimes too much relaxed, though.

If I had landed the Pegasus before the D70S, I would probably have settled with that - for some weeks ...

Even though the nominal unbalanced output voltage difference betweem the two dacs is 0,195V (1,99V vs 1,795V), for some reasons the Pegasus sounds 3 db's quieter than the D70S. That made comparisons fussy and stressful.

I hope not having hurt anybody with the above comments.

There is a review of the Musician Aquarius on YouTube. I did try the Pegasus but had to return it due to overheating and the outputs will shut down after a hour or two.

John57 said:
There is a review of the Musician Aquarius on YouTube. I did try the Pegasus but had to return it due to overheating and the outputs will shut down after a hour or two.
Click to expand...

Too bad to hear about that fault. With non-returnable items, in that case usually a Pandora's vase opens up. Sending back to China for service seems not a viable option.

Out of the box, my sample had a nasty distortion with higher piano octaves (track 4 of Oscar Peterson's We Get Requests was a mess), so that I was about to immediately put the Pegasus back in the box and call the courier. But it was thursday, I already felt in weekend mood and gave the thing a night to "adapt". Next morning the distortion was gone, but the (intentional ?) response dip in the lower midrange, which gave a colored timbre to some female voices, stayed there.

Once I got a nasty crackle through Sp-dif with a specific cable, but chose to ignore that.

Back to the D70S, I get a more "contoured" presentation, think "painting" (Pegasus) vs bas-relief (D70S).

Too bad now I focus on a sort of artificial, glassy resonance in D70S' lower treble, like in piano notes decay. But in a few days the sonic memory of the Pegasus' "positives" will fade away and my ears will be back to business. Pegasus' "negatives" sent it back to its box, though.

The D70S won again its place in my system (as vs Yggdrasil, Pontus I, SGD1, PS NuWave, D90 and others), but with a setup different from mine, the Pegasus could be an excellent proposition for classical and acoustic music. Rock - forget about it.

MBL'er said:
Back to the D70S, I get a more "contoured" presentation, think "painting" (Pegasus) vs bas-relief (D70S).
Click to expand...

I suspect many users of HeadFi to actually be seller. They are just escalating some unrealities regarding products. This brought me to chose a well-measured D/S Dac. Btw, My D70s will be knocking on the door within two days.

Yesterday at 1:06 AM
Walter