This is a review and detailed measurements of the JBL SA600 vintage (1966) stereo amplifier. It is on kind loan from a member.

The classic look endures the test of time. It is more usable and stylish than many amps of today. Inputs though, are oddly placed underneath the unit: 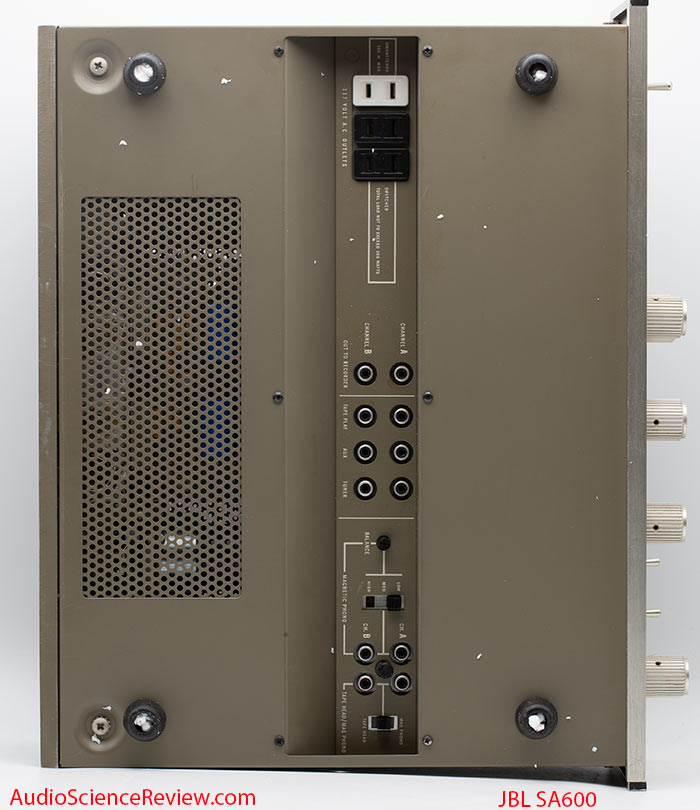 Prices for these can go way up with one currently listed at US $5,600!

Here is the background from the owner:

"“This was an estate find that came with an original owner’s manual (not a photocopy!) that looked and sounded great albeit with a large channel imbalance. I reached out to Peter to do a “classic car” restoration in that I wanted to figure out how to keep this amp running another 60 years from now but to also keep things as close to original as possible instead of doing a restoration-modification like transforming a vintage car with a Tesla powertrain. I’d like to send it to Amir after restoration so we have an rough estimate of how the very first solid state integrated amps from the 1960s likely performed. This amp is interesting because JBL didn’t know how the amp performed because it was at the limit of the test equipment at the time before negative feedback was applied, so no one really knows how it performs once negative feedback was applied. I sent Peter a full set of new-old-stock JBL branded, Motorola manufactured transistors from a different estate sale from someone’s whose dad worked closely with Ed May. Per Peter, several of these transistors had already deteriorated on their own, but he was able to use a few of them in the restoration.”

Peter is humble, and I would add that he spent about a year researching the idea and reviewing the technical and original designer’s writings before actually embarking on the restoration. This is almost a 2 year project! Ironically with the goal of not making it “too good” that it would defeat the purpose of having a benchmark to compare against."

And notes from Peter from Quirkaudio:

The preamp board had all of the electrolytic caps replaced, with a combination of low impedance and audio types, including the Nichicon Muse UES BiPolar types, depending on function. Some of the values were increased where appropriate. The film caps were mostly replaced with polypropylene or polyester depending on function. A number of ceramic capacitors were also replaced, generally with WIMA polypropylene.

Each main amp channel has a single PCB. The input pair were replaced with low noise modern transistors, and all the electrolytics were also replaced, again with a combination of low ESR and audio types as applicable. The input filter cap was replaced with a polypropylene film type as were the ceramic caps. The power rail caps were increased in capacity slightly. The main output transistors were all replaced with modern OnSemi types as they all measured poorly. Some of the resistors on the main amp boards were also replaced, mainly to reduce noise at input and feedback."

Here are the distortion and power specs: 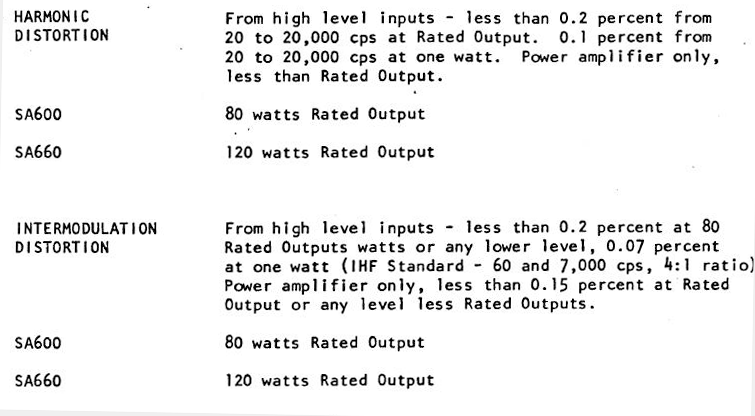 Edit: the original measurements were in error due to a loose grounding screw inside the unit. Once repaired, the power supply noise went down substantially, resulting in much better performance. This is the updated measurements.

JBL SA600 Measurements
While there is a set of pre-outs, they seem to be just pass through so I measured the amp as a whole unit. Here is our dashboard: 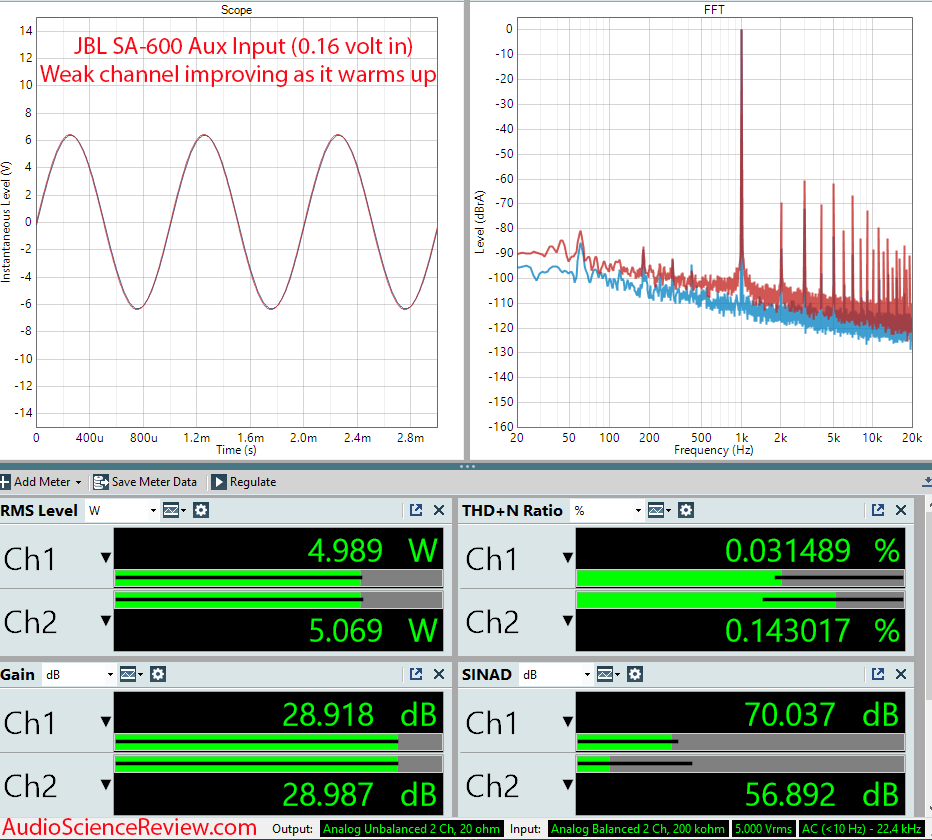 Our SINAD average for all amps tested to date is 78 dB. The good channel is not far off from that average. This puts shame on companies who produce amplifiers today with worse noise+distortion!!!

As noted in the intro and in my measurements, channel balance is quite off although it depends partially on the volume control position. In the review image you can see where I had to set it for the measurements.

Using internal power amp connectors, we get good performance for both channels so the issue above is the pre-amp: 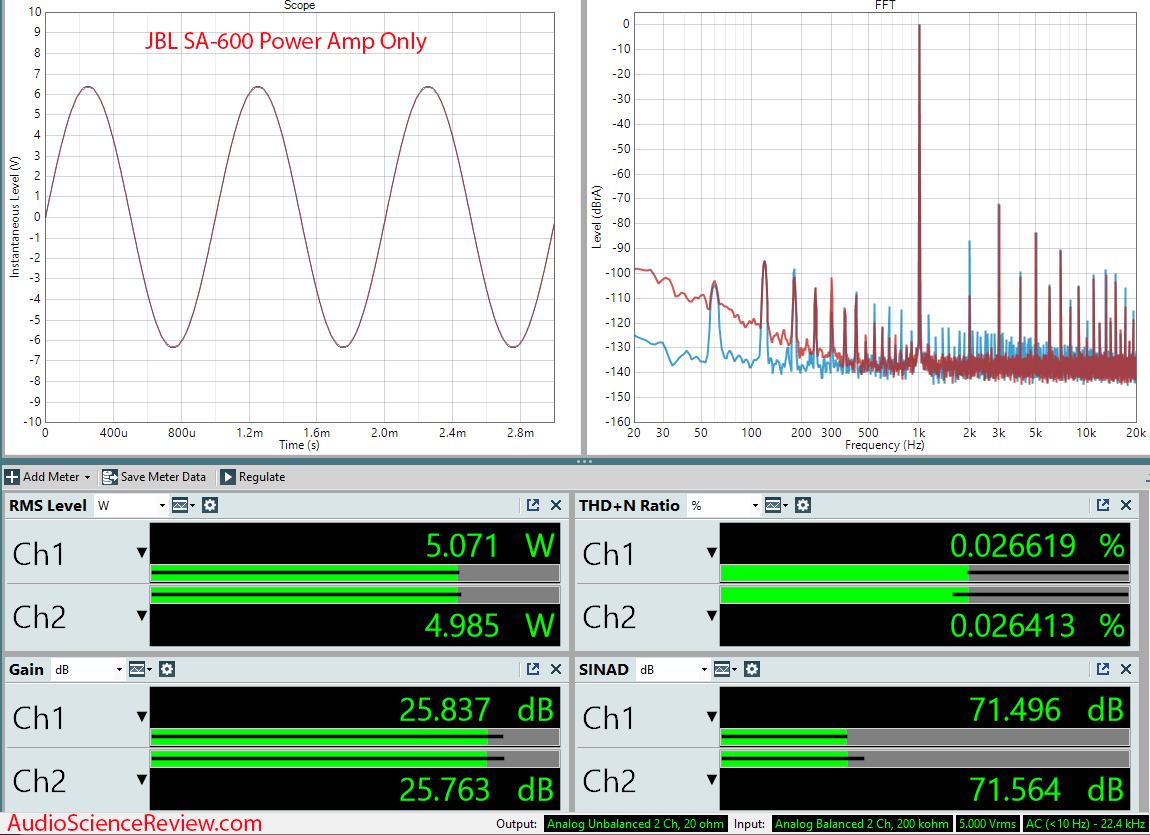 There is no tone defeat. With the controls not be precise at center position, response was quite variable: 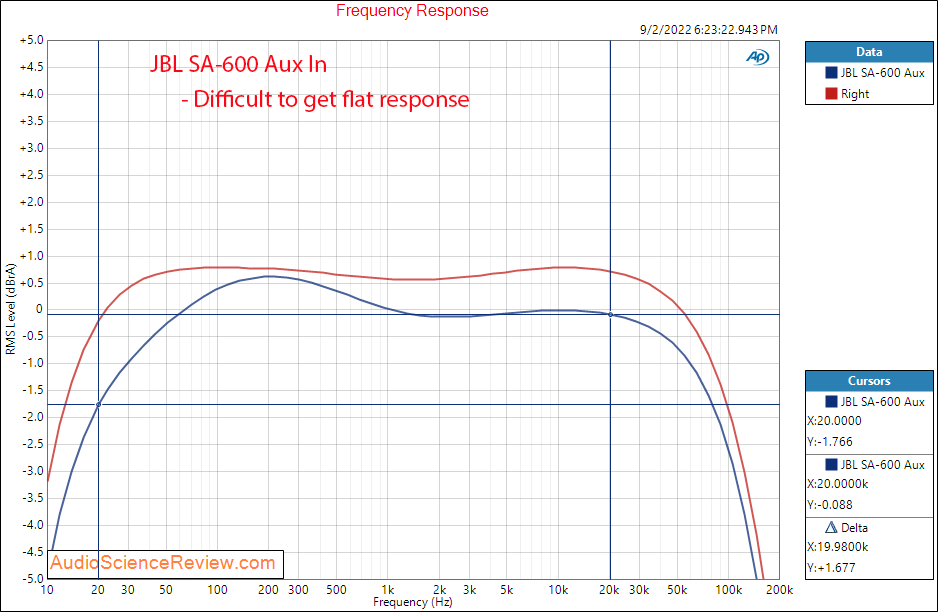 The low frequency cut off is likely due to capacitor coupling of the input.

Multitone shows the level of distortion we saw in the dashboard: 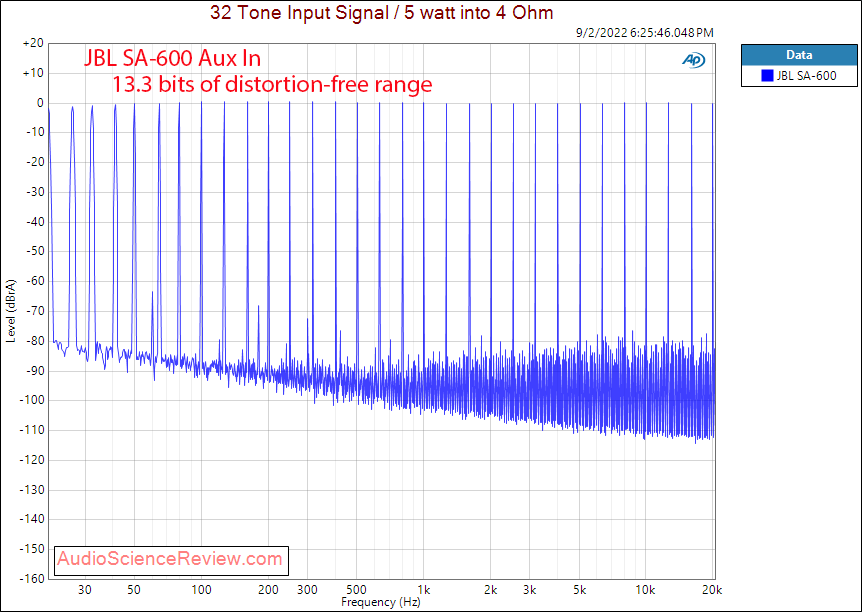 Crosstalk was quite poor: 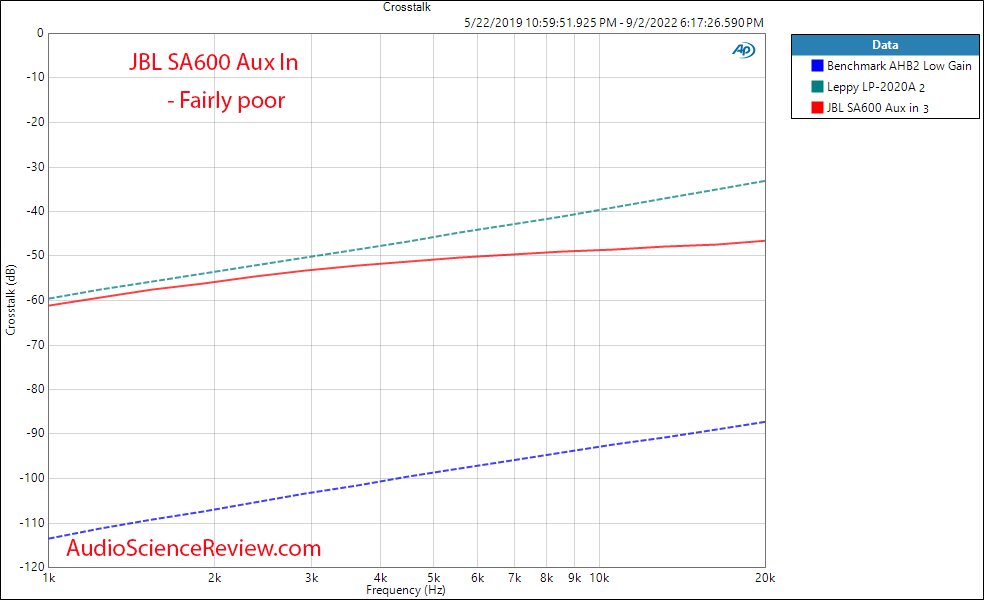 Here is our power response: 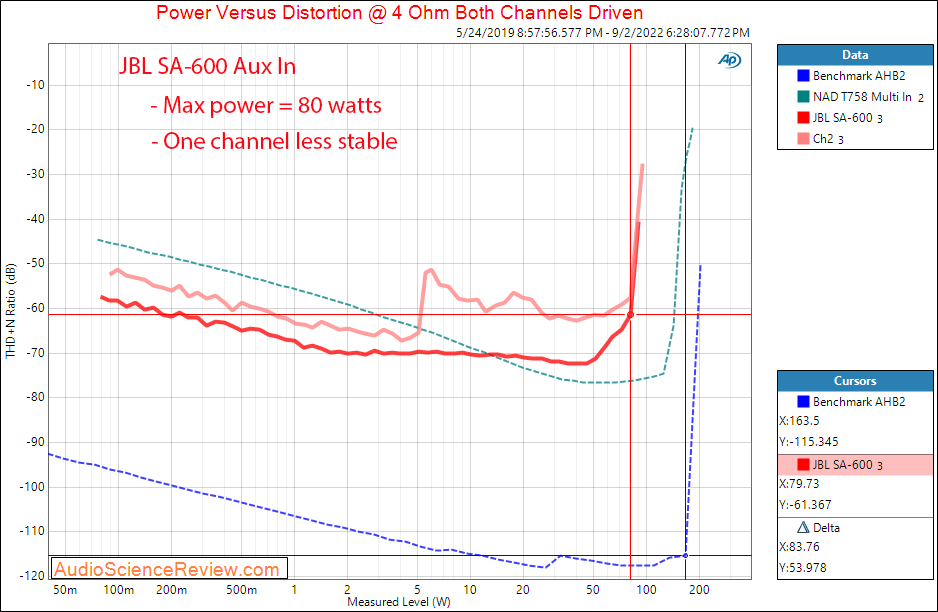 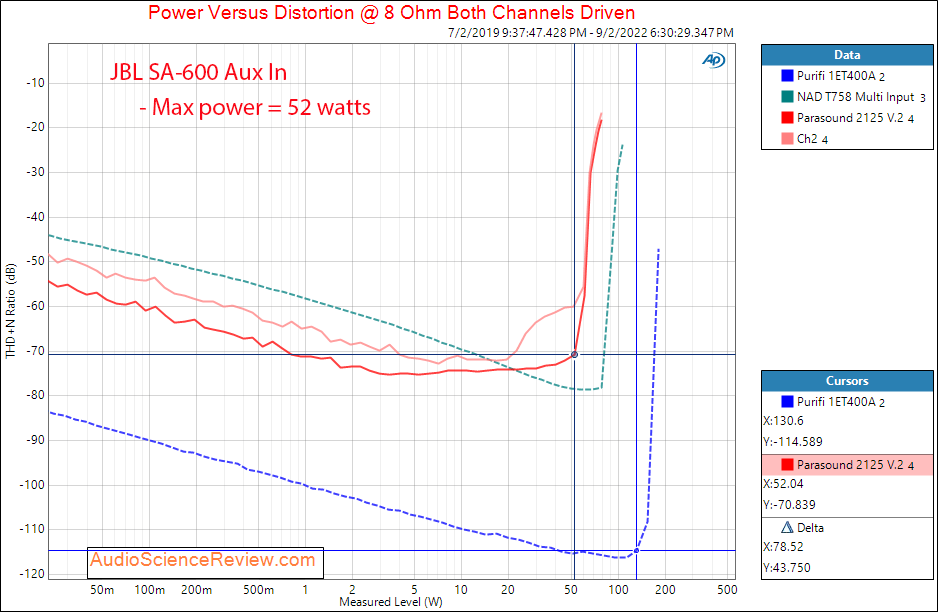 This is a lot of power for such a light box. We get still more if we use 1% THD or burst:

I attempted to run my frequency vs power sweep but the amp shut down with the first test (20 kHz).

Conclusions
1966 is a long, long time ago. We are talking early decade in life of transistor amplifiers. Was this a good attempt or not? Based on current measurements it is not bad considering the age.

Did you try to listen to it? It seems it must hum as a hell.
my audiopages
R

This kind of shows we are living in better times (at least amp-wise) than it may occur.
OP

pma said:
Did you try to listen to it? It seems it must hum as a hell.
Click to expand...

As I said, it blew the fuse so not functional right now to do that.
Amir
Founder, Audio Science Review
Founder, Madrona Digital
Review Thread Rules
My Technical Background
My YouTube Channel

Wow. Looks nice, but inputs underneath?!

Can't imagine how much money was spent on the restoration! XD
R

Can't imagine how much money was spent on the restoration! XD
Click to expand...

Speaking of restoration: One might be tempted to build a contemporary amp in the cabinet of such a "dinosaur".
Yes, the retro freaks would consider it a sin, but still...
D

Could make a good doorstop for windy days. One wonders what the caps in that thing, particularly in the power supply, look like after so many years.
H

The unit listed at 5.600$ is gonna be listed at 56$ after these measurements

Some internal pics and the amp schematic. 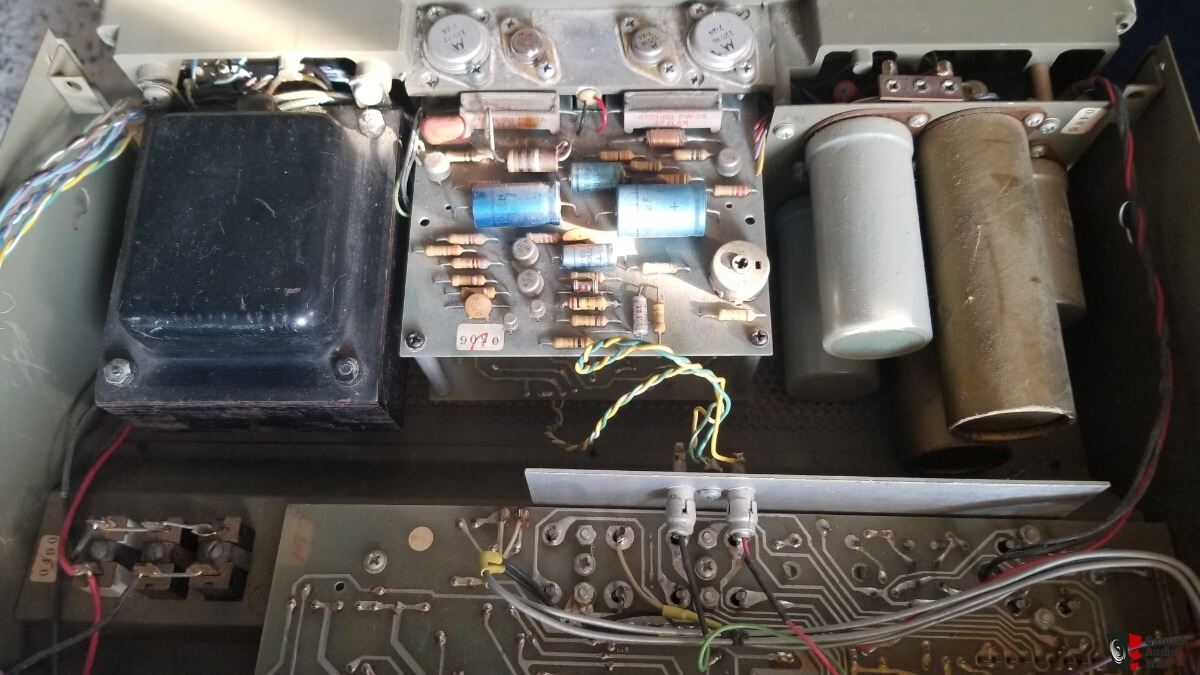 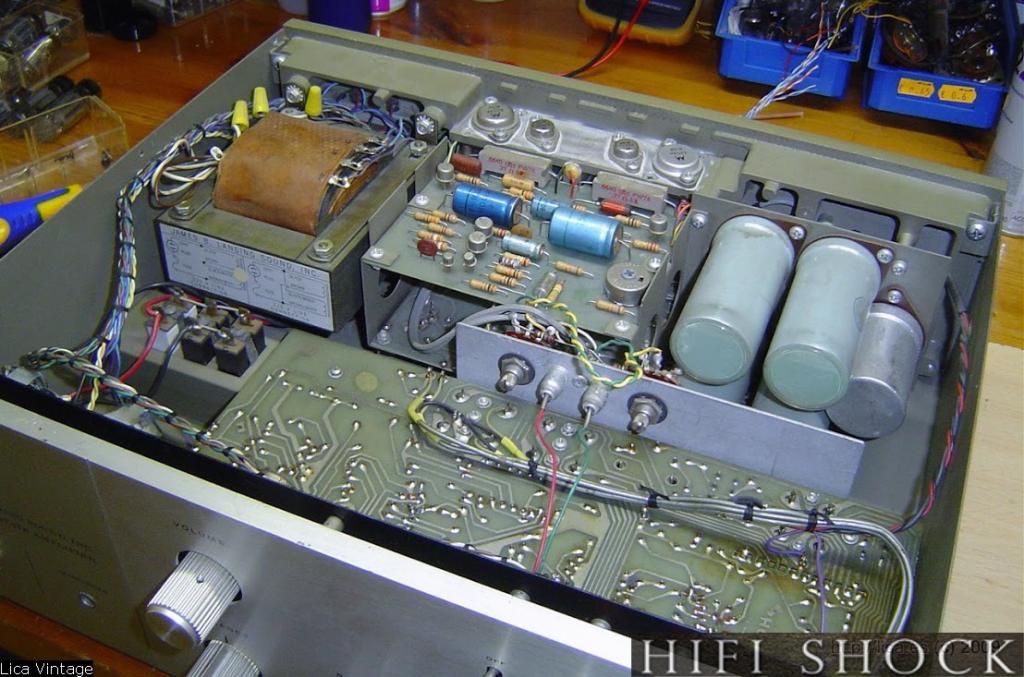 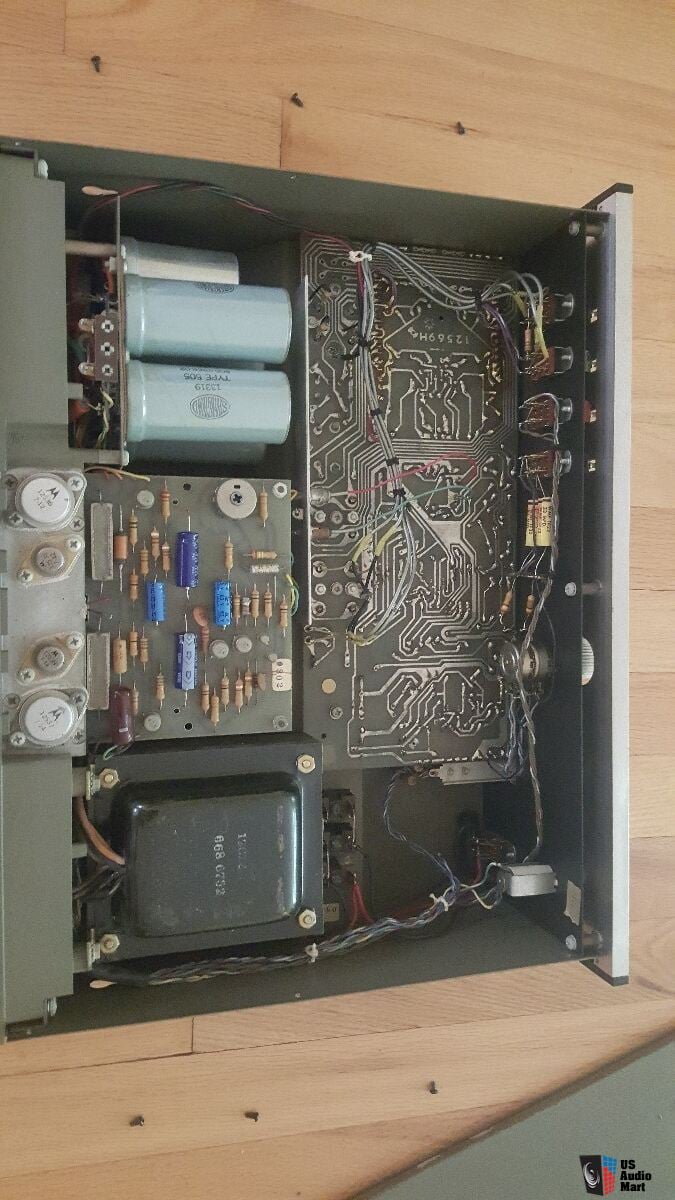 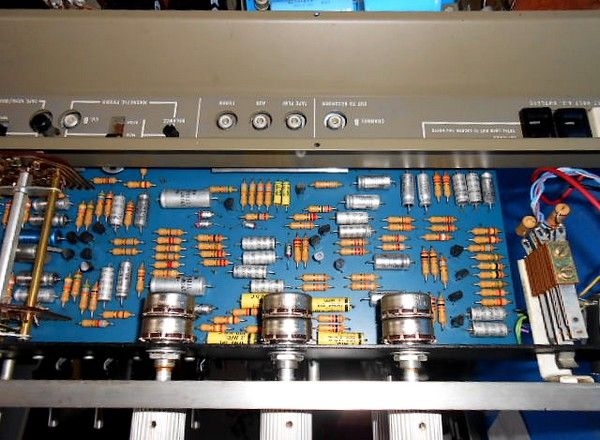 Definitely does not live up to the hype. I was imagining it would get closer to 60 dB SINAD based upon these measurements from Julian Hirsch.

Maybe this is what Arcam and JBL Synthesis were benchmarking against!

Thankfully as an estate find, it wasn’t anywhere close to the prices it can get in the Japanese market…

It takes a lot of manual labour to build one of this.
R

heraldo_jones said:
The unit listed at 5.600$ is gonna be listed at 56$ after these measurements
Click to expand...

I suggest this article has to be deleted. This Amp has the right to spend 60 more years without any attack even from @amirm .
audiothingsilike

dtaylo1066 said:
Could make a good doorstop for windy days. One wonders what the caps in that thing, particularly in the power supply, look like after so many years.
Click to expand...

The whole amp is restored. It’s basically brand new.
Do diamonds shine on the dark side of the moon?
G

Oh. The spec is half that @amirm

They say 80 watts but it’s really 40W per channel.

Doodski said:
Some internal pics and the amp schematic.
Click to expand...

No wonder that the fuse has blown during the power vs frequency sweep test .
my audiopages

I wonder if those new fast diodes are in part responsible for the higher than expected power supply hum?

Here is some more pictures and schematics: 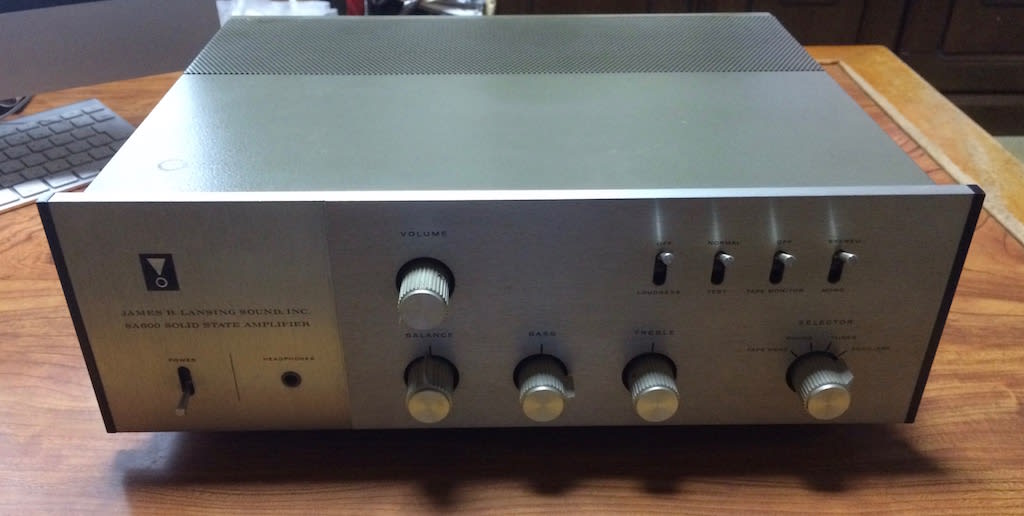 最高級（死語）プリメインアンプです。発表は1965年というから1回目の東京オリンピックの翌年という半世紀以上前の骨董。デザイナーはもちろんアーノルド・ウォルフ。JBLSE400Sで発表されたTサーキットと呼ばれるDCアンプにプリミティブなプリアンプを接続したものという解説が一般的。あくまでもデザイン優先のアンプでフロントマスクの美しさはもとより、リアパネルはJBLSE401から受け継いだもの。というかフロントパネルにプリアンプがくっついて、リアパネルにメインアンプがくっついた構造。したがってプリメインアンプに必要な入出力端子はなんと下側から取り出すというもの。分解してのメインテナンスのや...
blog.goo.ne.jp
Last edited: Sep 1, 2022
Do diamonds shine on the dark side of the moon?

voodooless said:
I wonder if those new fast diodes are in part responsible for the higher than expected peer supply hum?
Click to expand...

That's a good point, because "faster" diodes, filter caps with higher capacitance and lower ESR etc. do not necessarily result in lower resulting hum/buzz. And if you look at amp layout and wiring, poor PSR is to be expected.
my audiopages

Different than most discrete linears today in that its an inverting amplifier. If it wasn't for all that hum, it would be quite good performance for the time, esp. with how new solid state technology was.

Cars-N-Cans said:
Different than most discrete linears today in that its an inverting amplifier. If it wasn't for all that hum, it would be quite good performance for the time, esp. with how new solid state technology was.
Click to expand...

It was difficult or rather impossible to get reliable NPN-PNP silicon BJT pairs in 1966.
Check this catalogue

Cars-N-Cans said:
Different than most discrete linears today in that its an inverting amplifier. If it wasn't for all that hum, it would be quite good performance for the time, esp. with how new solid state technology was.
Click to expand...

It was actually one of the first silicon amplifiers. Solid state amplifiers before this were using Germanium!
You must log in or register to reply here.