This is a review and detailed measurements of the Hegel H95 integrated amplifier with DAC and streaming support. It is on kind loan from a member and costs US $2000.

I really like the large, high resolution and very responsive graphic display. What I don't like is the absence of power button on the front face. After some research I found out it is on the bottom. I realize without it there is symmetry but the one or two times that you play something super loud and want to rush to shut it off, you will hate the fact that it will take some effort to reach under to power it down. Another thing I didn't like is lack of acceleration on volume control. You have to crank and crank it to turn it all the way up and down.

The back panel shows the extra connectively over a standard analog amplifier:

Very nice to see built-in DAC and Ethernet streaming. What is not is the maximum supported sample rate of 96 kHz over USB. This tells me they are using ancient and obsolete USB interface. They say they did this for ease of design and to save money to put toward making the DAC itself better. We will see about that.

A simple plastic remote control is provided which is very similar to what we see from Chinese desktop manufacturers. I tend to like it but it is unusual for such an expensive product to come with this kind of remote. Usually they include some heavy but harder to use remote.

Hegel H95 DAC Measurements
This being an amplifier, I immediately jumped to measuring that part of it first. But then I had to backtrack when I noticed digital input performance was worse than analog. Given the line out, I decided to measure the DAC using coax input. For some reason, like a Hegel DAC I tested in the past, my ASIO4ALL interface would not see the USB input so I decided to test with Coax. Here is our dashboard with volume control adjusted to produce the nominal 2 volts: 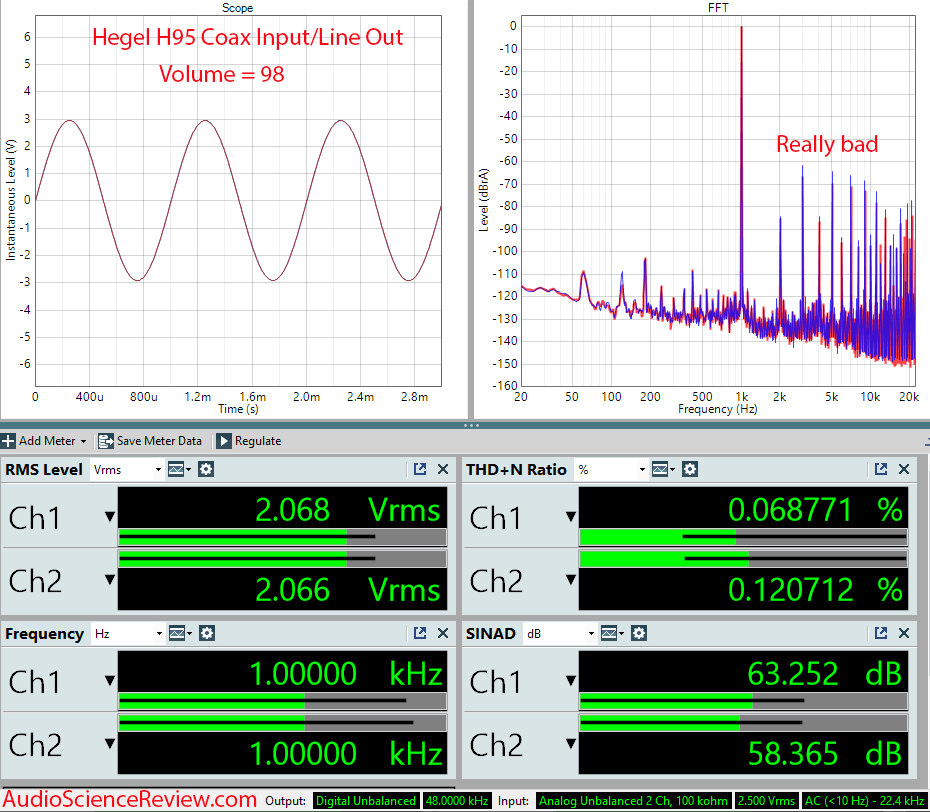 I don't need to tell you that this is stunning high level of distortion, landing the H95 seven from the bottom list of some 350 DACs tested:

When sweeping IMD distortion level, we can see part of the problem: 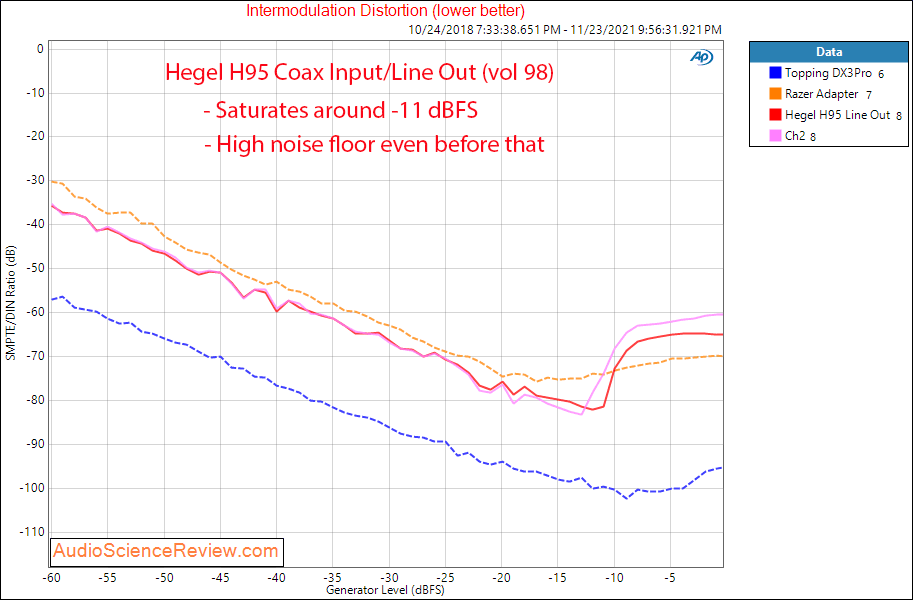 This is something we see in Audio/Video receivers where they set the optimal gain to drive their amplifiers and not the 2 volts we are looking for. Even then performance is not good, barely showing less noise than a $9 phone dongle! We can measure the noise itself: 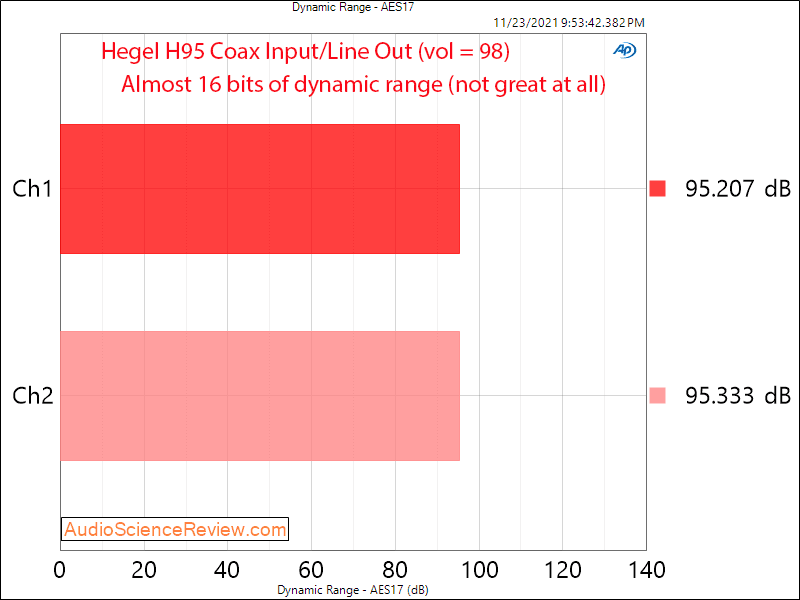 This is horrid performance in any modern DAC.

Back to distortion, we see that again in multitone test: 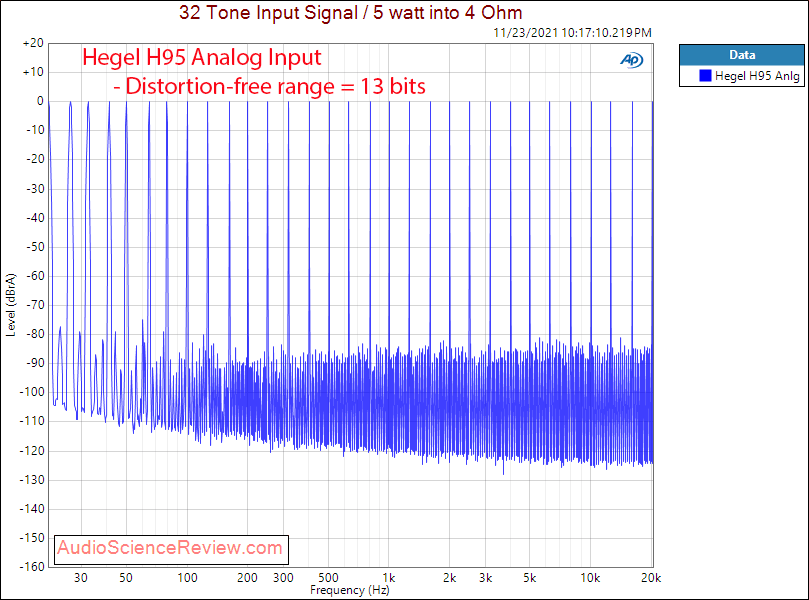 Jitter performance is lackluster and what I would expect to see from random ebay DAC: 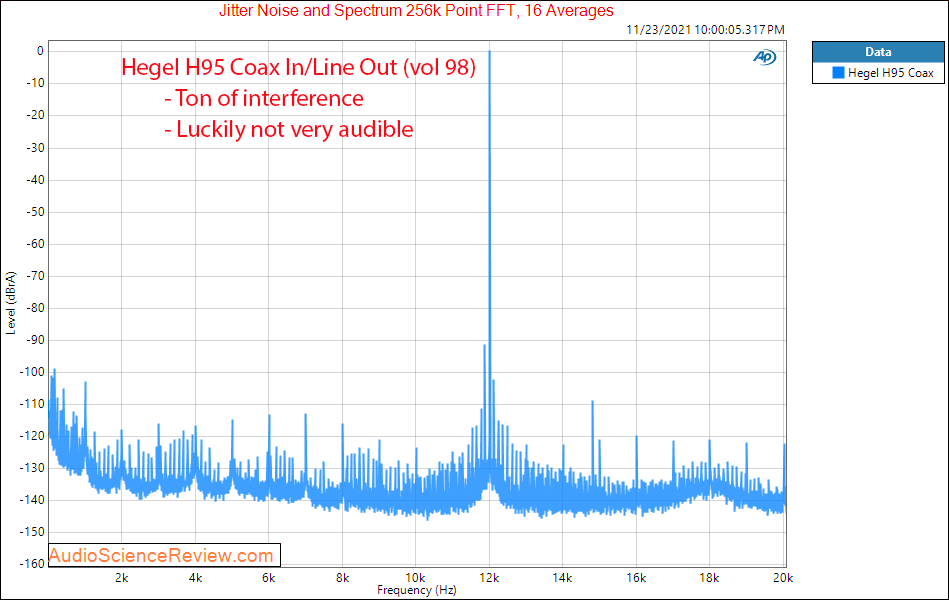 To finish our suffering, here is poor linearity measurement: 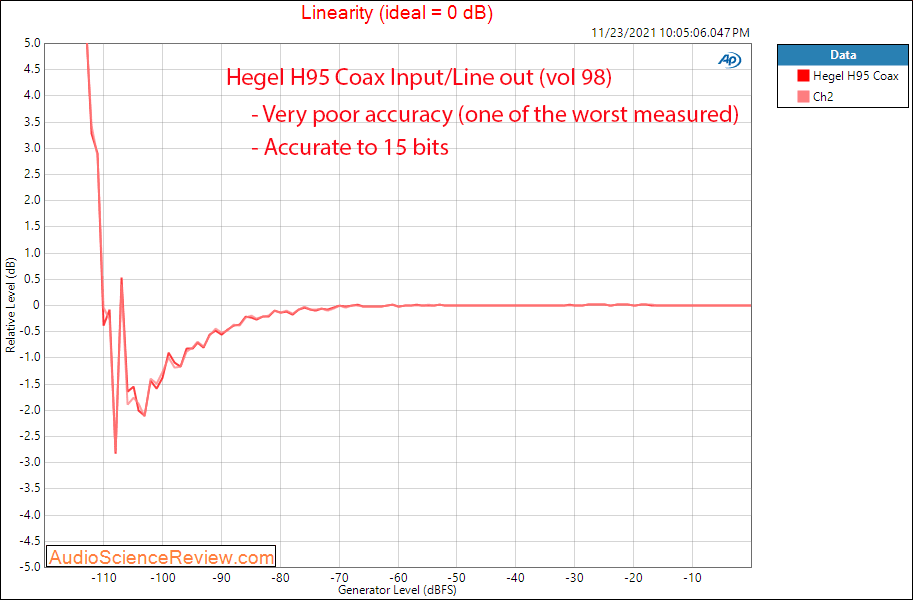 I think they may have unseated Schiit with their multibit DACs and poor linearity!

Hegel H95 Amplifier Measurements
I first started with line in and adjusted the volume to get the nominal gain of 29 dB we use in integrated amplifier tests: 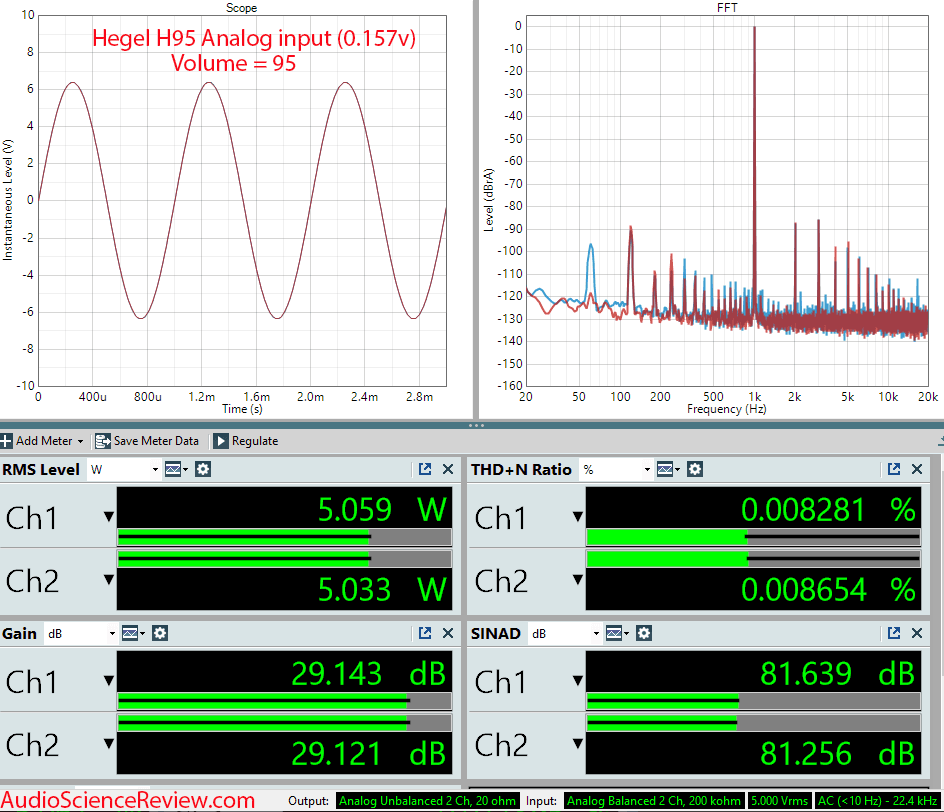 Noise and distortion is just above average:

I expected a lot better as the company's claim to fame is a comparator which supposedly detects distortion and sends an inverted signal to the amp to correct. We see plenty of amplifiers without such circuit performing far better as you can see in above graph. And of course we have products that use true feed forward technology such as Benchmark AHB2 currently occupying #1 spot in above graph.

What's more, there are stability issues with that circuit (my guess). Check out the warm up performance of this amplifier: 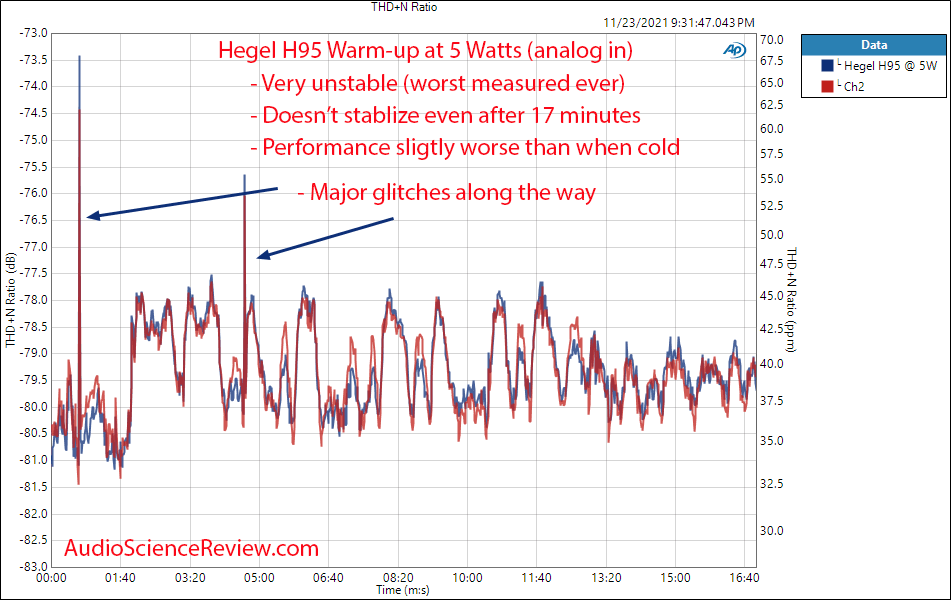 I have never seen anything like this. Variations are quite large (as much as 3 dB) with two very large spikes. It never stabilized even though I let it warm up far longer than other amps to tune of 17 minutes. Best case performance was actually when the amplifier was just powered on at 80.5 dB SIAND but then finishing at 79.5.

Switching to DAC input which one would hope would eliminate source of external noise made things worse, not better in that regard: 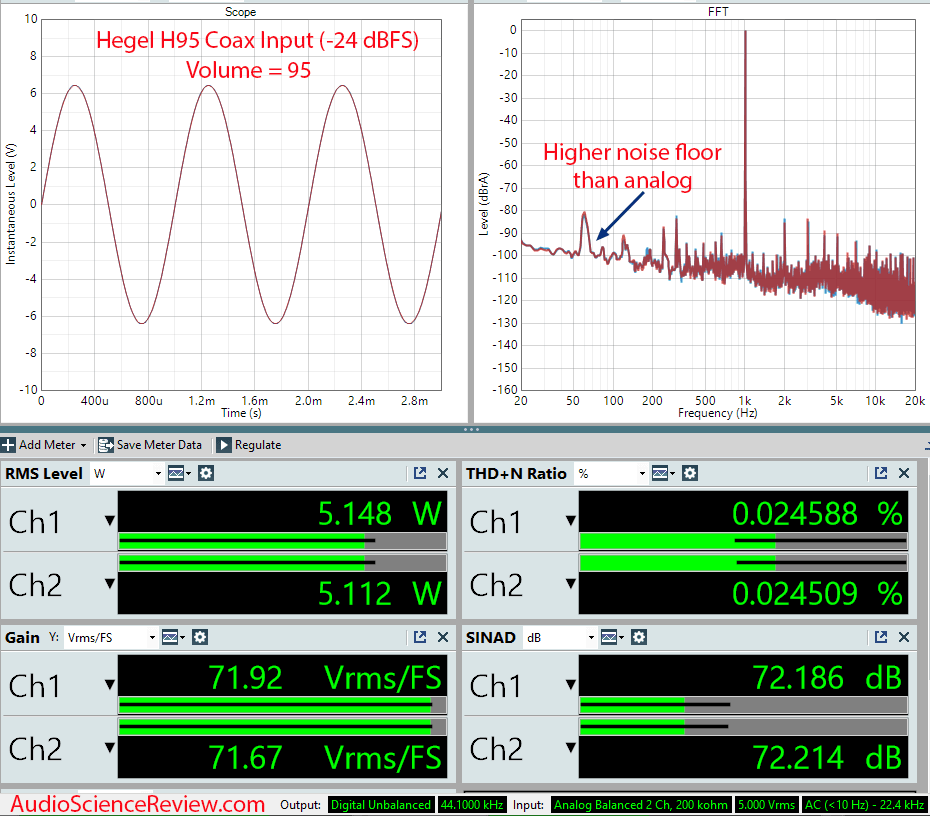 You are losing 9 dB in SINAD due to much higher noise floor. Why or why? Again, AV receivers do this but I don't think I have measured this kind of degradation before when using digital input.

So from here on I focused on analog input. Here is our dynamic range:

I like to see 96 dB at 5 watts but 91 is fine. The max power performance doesn't improve much because this is not a very powerful amplifier. 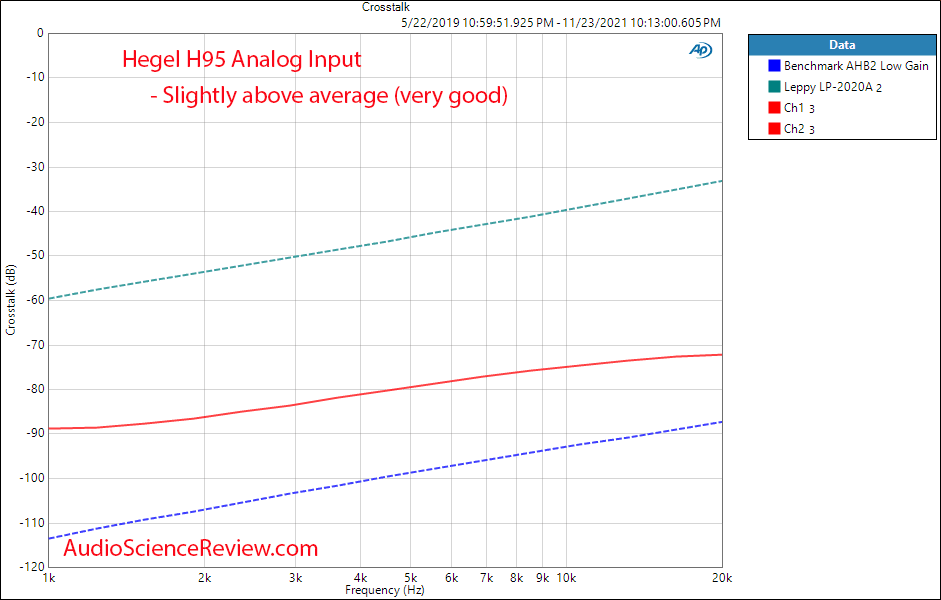 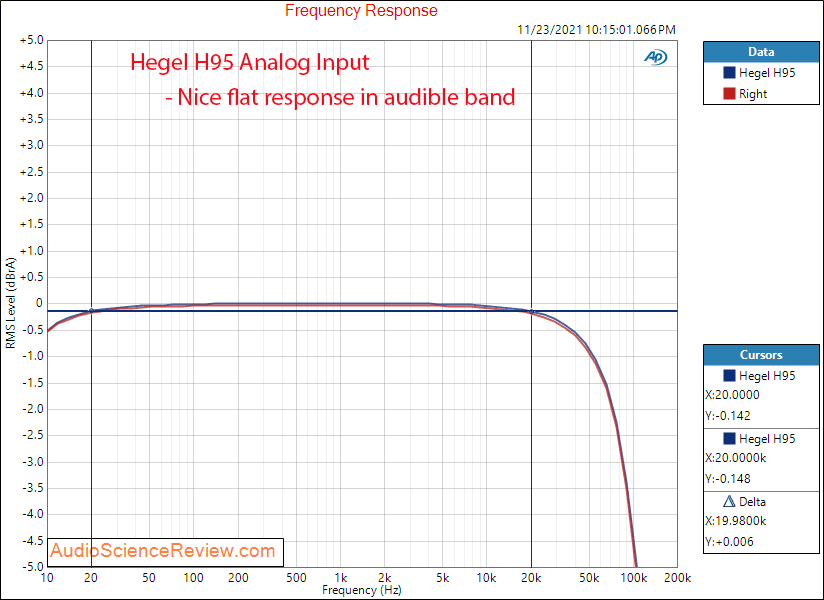 Power output is just 63 watts into 4 ohm at the knee of the distortion curve: 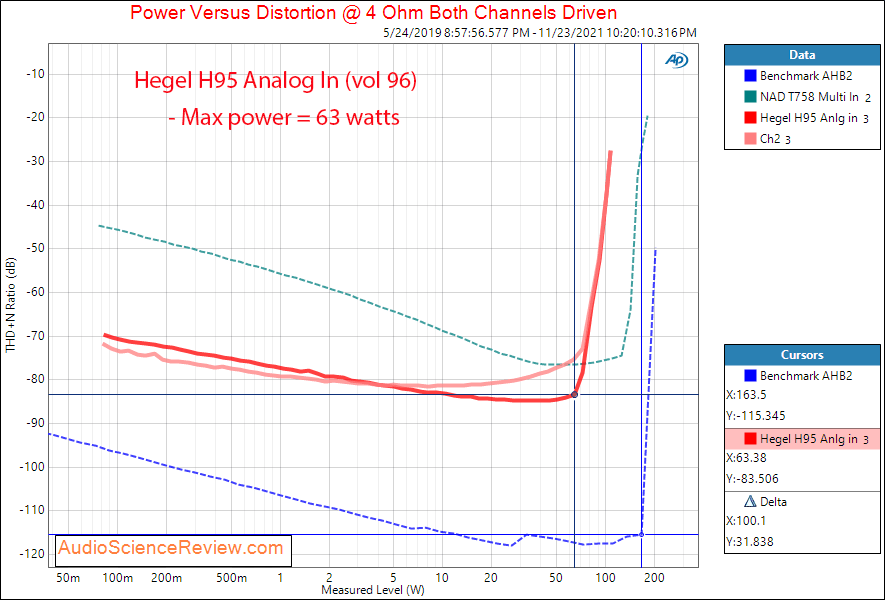 Power into 8 ohm is very low for this expensive of an amplifier: 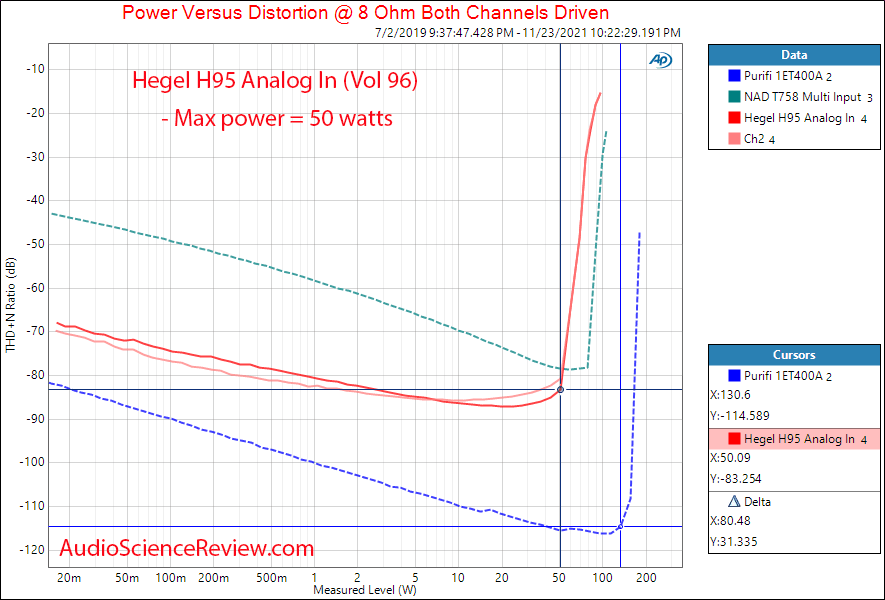 Checking for frequency dependency we see something limiting power before the amplifier naturally doing so: 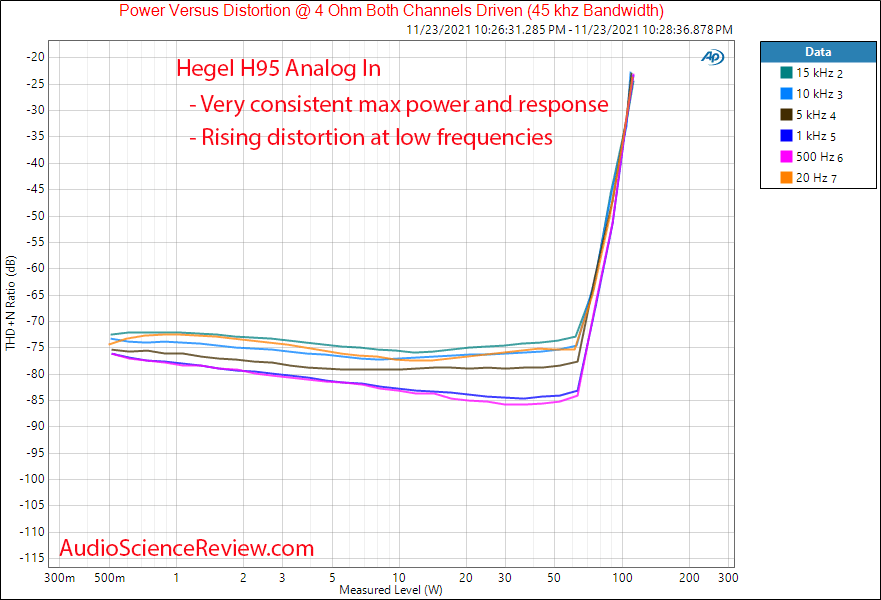 Hegel H95 Headphone Amplifier
I usually don't bother testing headphone output on this type of amplifier as it is usually an afterthought. But company talks about improving its output and noise level relative to prior products so I decided to test it some. Here is our power curve into 300 ohm: 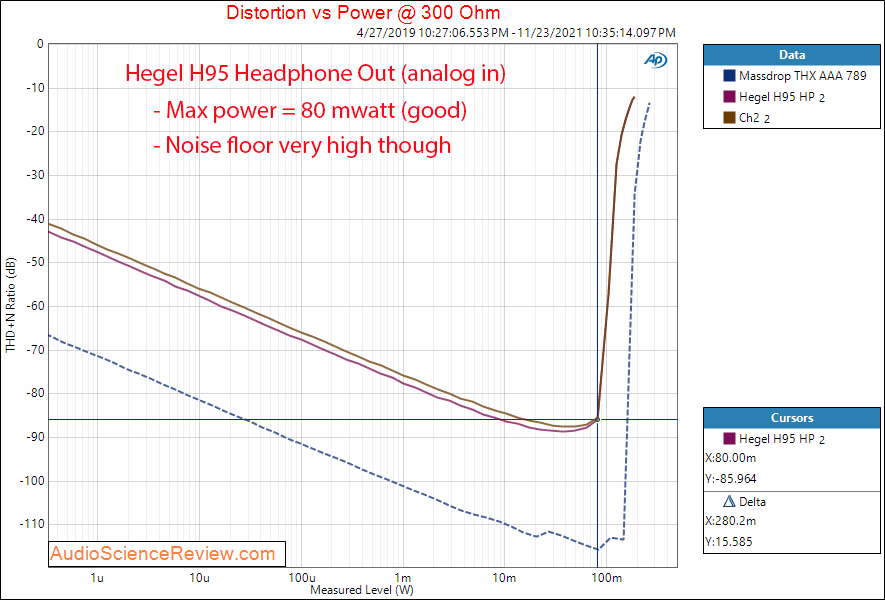 I like to see 100 milliwatts of power here and 80 is close enough. Switching to low impedance, we should get a lot more power but we do not: 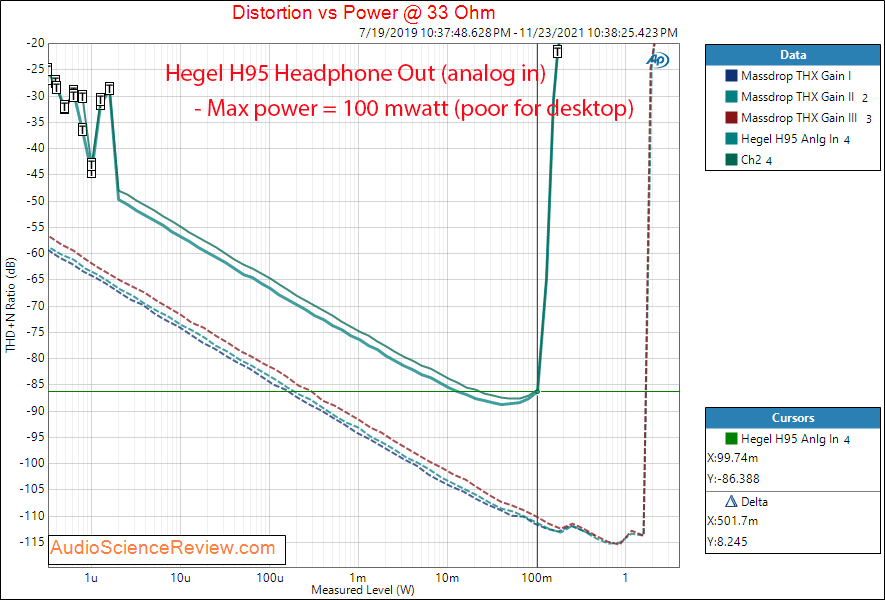 The guarantee reason is high output impedance and that is precisely what we have: 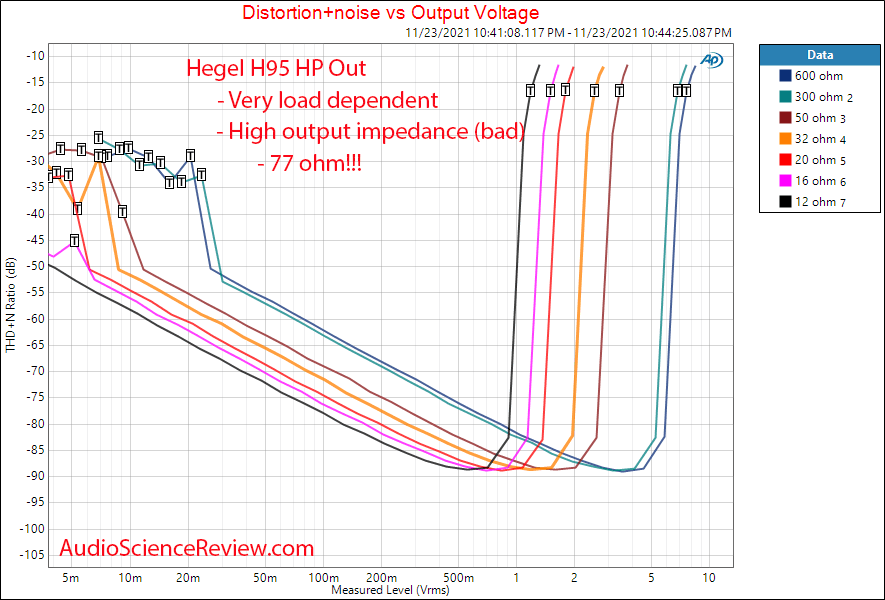 I am amazed that in this day and age companies like Hegel are not aware of the fact that high impedance is bad for many headphones (changes their tonality) and that even budget headphone amps have impedance below 1 ohm. 77 ohm is just out of the question.

Conclusions
Let's quickly agree that both the DAC and headphone amplifiers are junk. They are better off leaving both out. You can do better with hundreds of products that cost the same as the shipping or tax of the H95. I watched one video where the youtuber said he preferred the sound of Hegel DAC to his Chord Mojo in some ways. Wonder what he thinks now.

The amplifier in H95 is good as far as noise and distortion but nothing to write home about. Continuous power is very low for an amplifier costing $2000 however.

This is just a bad attempt all around.

I can't see any reason to recommend Hegel H95. Company needs to go back to the drawing board and design performant DACs and headphone amplifiers as a minimum. On amplification, they are being left behind by proper feedforward designs and excellent class D with tons of power.

Thanks Amir. This thing is vastly inferior to <$200 products like Loxjie A30. Amazing. And good to know.
C

I've always wanted to see some digging into Hegel products, but they do seem to generally get good user comments otoh....but never tempted me in terms of value/use.

Oh man...another regarded, good subjective reviews audiophile brand with a feet of clay product...The whole thing is rather bad in so many metrics there is just no saving, even if I like the aesthetics...sad.

Wow that went from bad to worser, remains to be seen if they learn anything from it. To my very own surprise some did.

amirm said:
You can do better with hundreds of products that cost the same as the shipping or tax of the H95.
Click to expand...

That made me snort.

As a new member I still can't help being presumptuous asking why testing continued following these atrocious distortion measurements when it was painfully obvious what was in store. Granted, anyone can stop reading whenever they choose. (lol)

The subjective Hegel fanboys are currently forming a support group.

Oh BoY! This guy is going to be eating his words, "The DA converter is massively improved" "Much more expensive DAC" " DAC is the same as in the H120 and the H190" "AKM DAC chip" "H95 is revealing more detail, is more fluid, more musical than the H90, paints a bigger soundstage, so you can really hear the flow wide and deep of the speakers" and blah blah he goes on and on.
This guy is a goof. 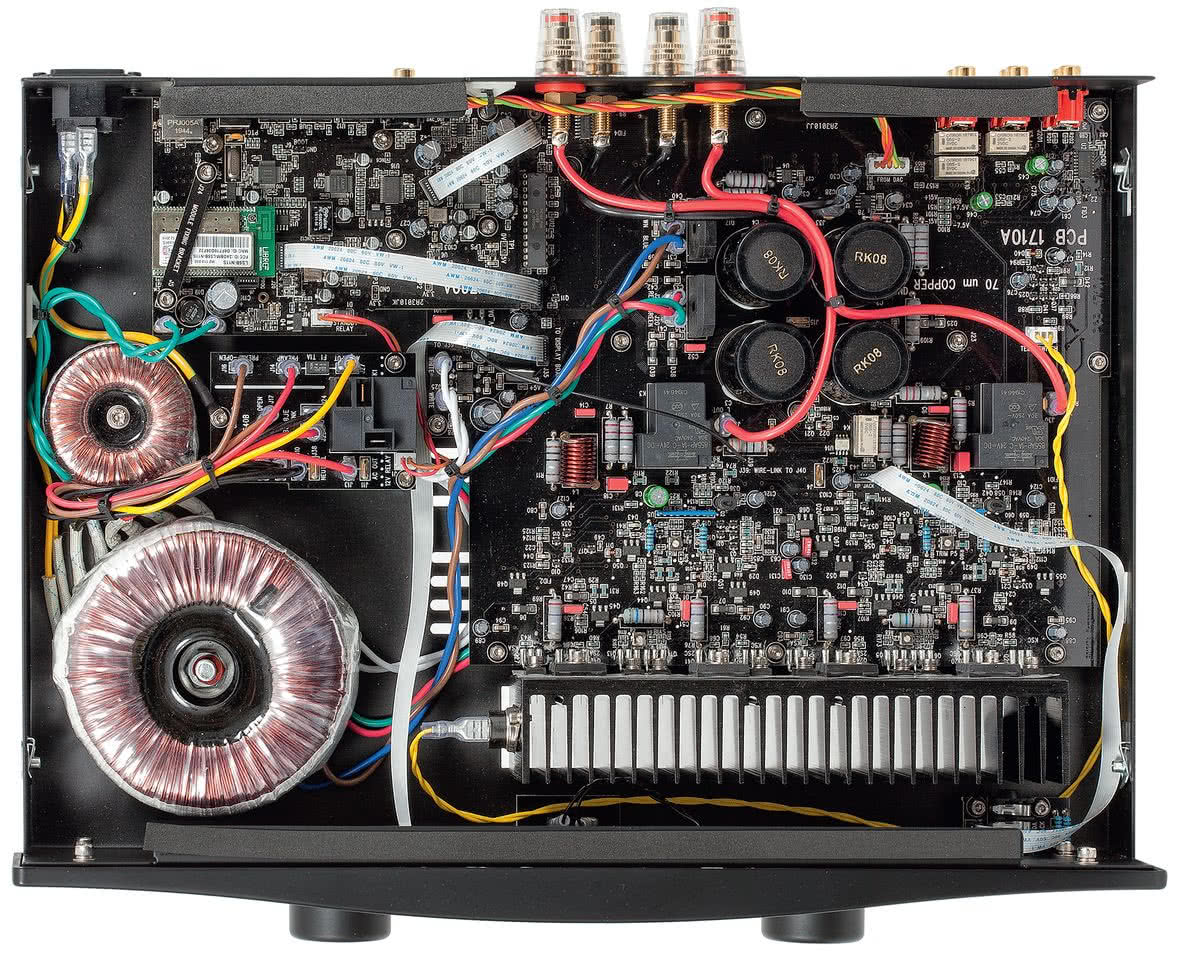 Does not surprise me at all. I've been telling these youtube reviewers for a while now that Hegel performance is awful, and they have had issues with poor implementations of their digital inputs for years now. I'm curious to see how the top of the line ones perform to put the nail in that coffin.

I am so glad this site exists. The amount of *** I have read about the Hegel products and this is what they deliver. Unbelievable.
Ohne Musik wäre das Leben ein Irrtum.

Uneducated people delight in argument and fault-finding, for it is easy to find fault, but difficult to recognize the good and its inner necessity.
Screw Erin, contribute to MY nfs fund
OP

Larry B. Larabee said:
As a new member I still can't help being presumptuous asking why testing continued following these atrocious distortion measurements when it was painfully obvious what was in store. Granted, anyone can stop reading whenever they choose. (lol)
Click to expand...

I love to stop early but every time I have attempted that I get asked to test the rest. And then defenders of the product claim I only tested one or two things. To avoid all this, I spent a long time testing all these subsystems.
Amir
Founder, Audio Science Review
Founder, Madrona Digital
Contributing Editor, Widescreen Review Magazine
Click for My Technical Background
My YouTube Channel
OP

Doodski said:
This guy is a goof.
Click to expand...

Yeh, I watched that and it is such nonsense fanboism. For the life of me I can't figure out why Soundstage hired him to do these videos. I don't find him charismatic, knowledgeable or anything positive.
Amir
Founder, Audio Science Review
Founder, Madrona Digital
Contributing Editor, Widescreen Review Magazine
Click for My Technical Background
My YouTube Channel

Holy crap. Is this simply the result of cheap and lazy engineering?
Last edited: Nov 25, 2021

amirm said:
Yeh, I watched that and it is such nonsense fanboism. For the life of me I can't figure out why Soundstage hired him to do these videos. I don't find him charismatic, knowledgeable or anything positive.
Click to expand...

When I first started I watched quite a few of his videos. I didn’t know any better and was so curious given the whimsical hyperbole he spoke with. Slowly I became skeptical and later outright pissed that he could even have a channel at all with the nonsense that spews out of his mouth. I stopped following a lot of people that day. They’re just paid salesmen. I more, no less.
You must log in or register to reply here.