This is a review and detailed measurements of the HEDD (speaker company) HEDDPhone headphone. It is on kind loan from a member and costs US $1899.

There is no sugar coating the massive size and high weight of HEDD: 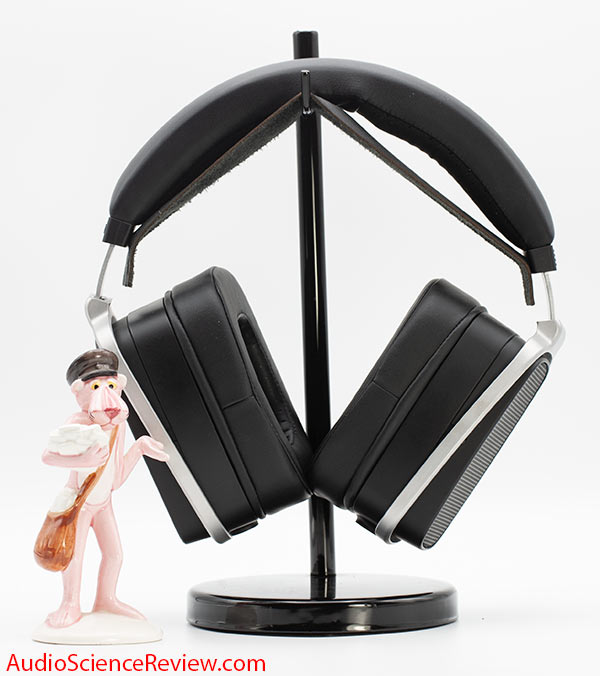 I wear heavy helmet and protective gear when woodworking on working in the yard so the weight -- at least initially -- was not bothersome. The wide and supple leather strap helps with that. The fit is not very tight side to side however and if you rotate your head too quickly the headphones have a lag in following you. I got used to the whole affair listening for 1+ hour but when I took them off, I could sense slight discomfort in the back bottom of my neck. Given this, the HEDDphone can't be your everyday listening gear. You would put it on to listen for a bit and then take it off.

EDIT: seems like the leather strap is an aftermarket addition on this headphone.

A rather stiff and rope like detachable cables come with it (or at least I think these are the stock cables -- owner sent me some other braided ones): 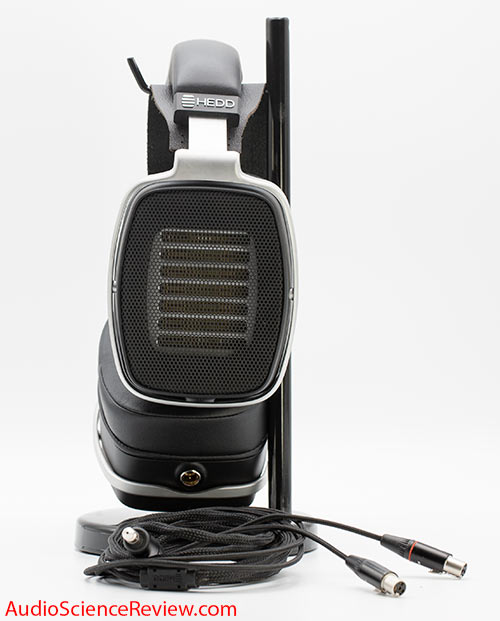 Here you see the main differentiation of this headphone: the driver is the AMT one we are used to seeing as tweeter on speakers but now it has been put to use as a full range unit. Is it a good idea? Let's find out by measuring and listening.

HEDD HEDDPhone Measurements
As usual we start with our all important frequency response graph, shown together with our reference target (dashed blue): 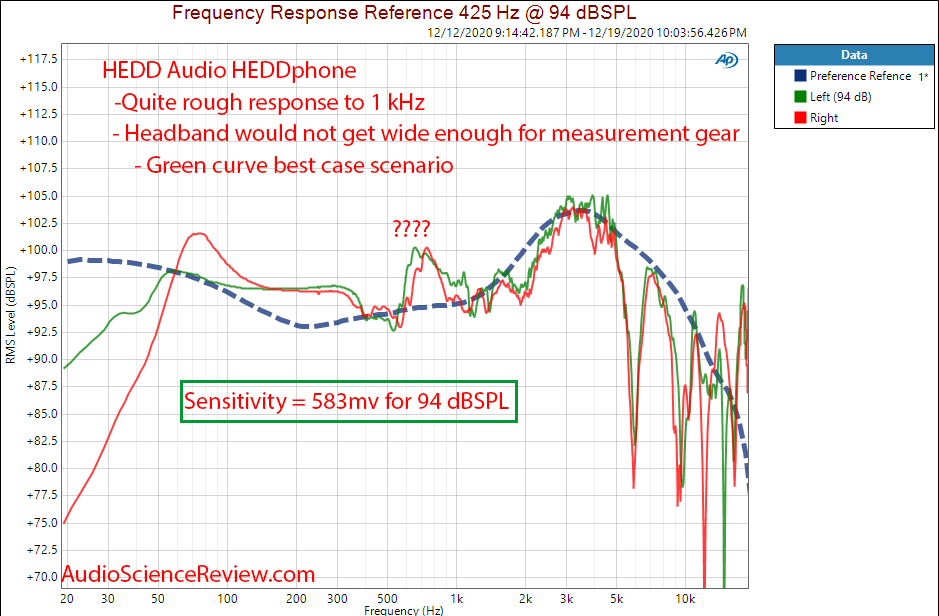 Let me first note what is going on with the large variance between left and right channels. The strap is screwed to the chassis of the headphone using four tiny screws. As delivered by the owner, it would not get wide enough for me to properly experiment with placement on the gear. It was close but I needed a hair more. I looked at adjusting the screws but they seem partially damaged/nicked so I did not want to take a chance of messing with them. So I played around and got one channel to perform well which is the one in green. All other attempts at placement produced the red curve for both cups.

Back to the measurement, we see quite an uneven and exaggerated response between 100 Hz and 1 kHz. That peaking between 600 and 800 Hz is quite odd. Must be some kind of low Q resonance which unfortunately makes it audible. Above 1 kHz we are actually close to the target. forgetting about the troughs that are usually cancellations caused by reflections.

Note that the headphone is quite inefficient requiring nearly 0.6 volts to produce 94 dBSPL at 425 Hz. Due to sharply declining bass response, you need to crank it up much more than this to get decent sub bass response.

I am not happy with the roughness of the response above 500 Hz. We see a lot of tiny noise-like variations. Let's look at the distortion graph to see if there are any clues there: (note: 124 dB should say 114) 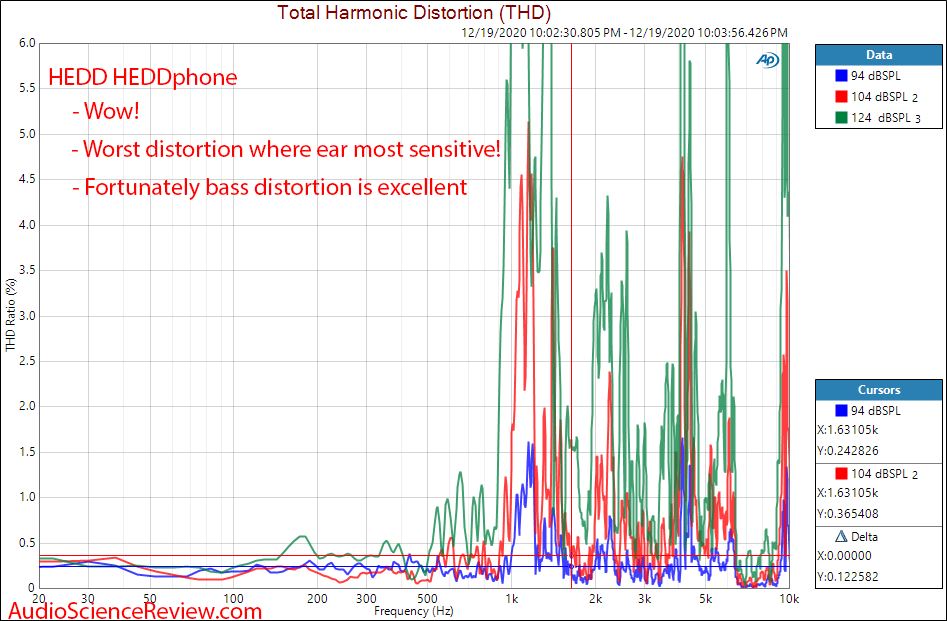 Wow, what happened here? Every speaker I have tested and all the headphones so far have highest distortions in low frequencies, shrinking down to very low in higher ones. The HEDD is the opposite. Our hearing is most sensitive in 2 to 5 kHz so having highest distortion there doesn't seem to be a good idea. Note however that the above is a ratio so gets spiky when there are response dips so let's look at the absolute level: 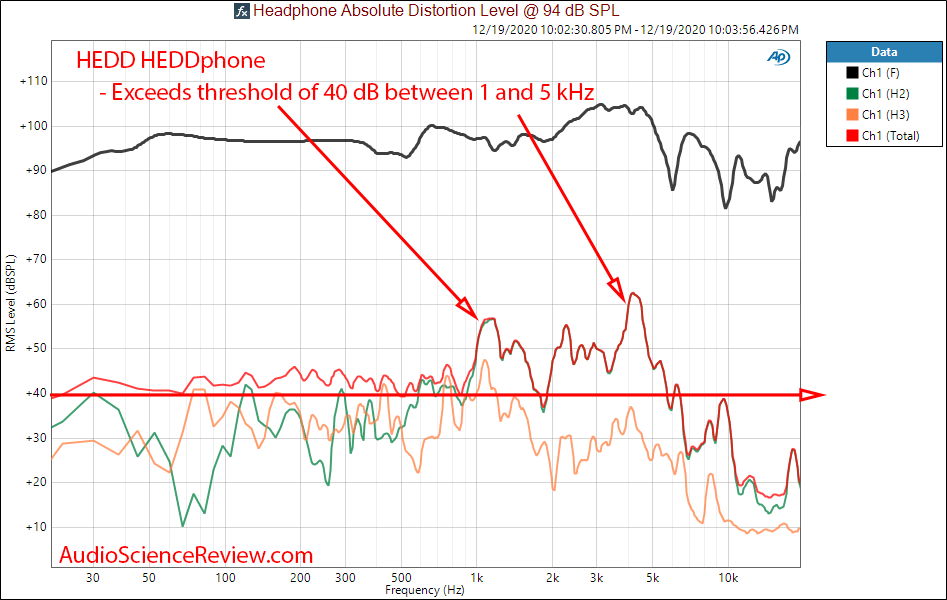 Same problem although not nearly as revealing as our previous graph. My reference of 40 dBSPL is exceeded from 1 kHz to 5 kHz.

From glass half-full point of view though, we should be able to push the low frequencies hard with no distortion consequences.

Group delay also points to messiness in mid-frequencies although this measurement is not very revealing in general: 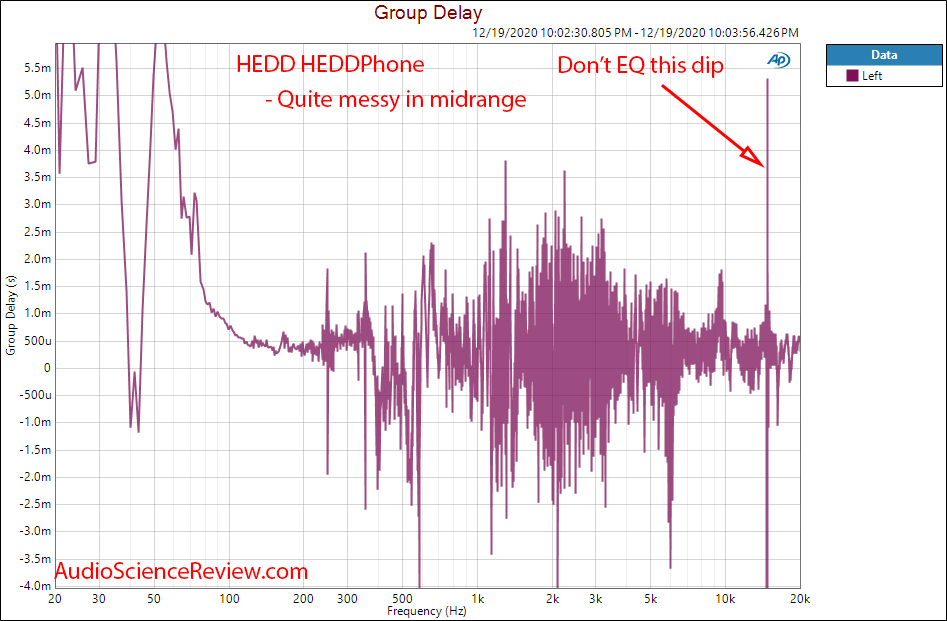 With the exception that any tall spiked indicate "non-minimum-phase" response so you should not attempt to EQ them. Fortunately they also show up as narrow and deep troughs in frequency response so the Group Delay graph just confirms that.

For those of you who want to see "speaker frequency response" type graph, here it is: 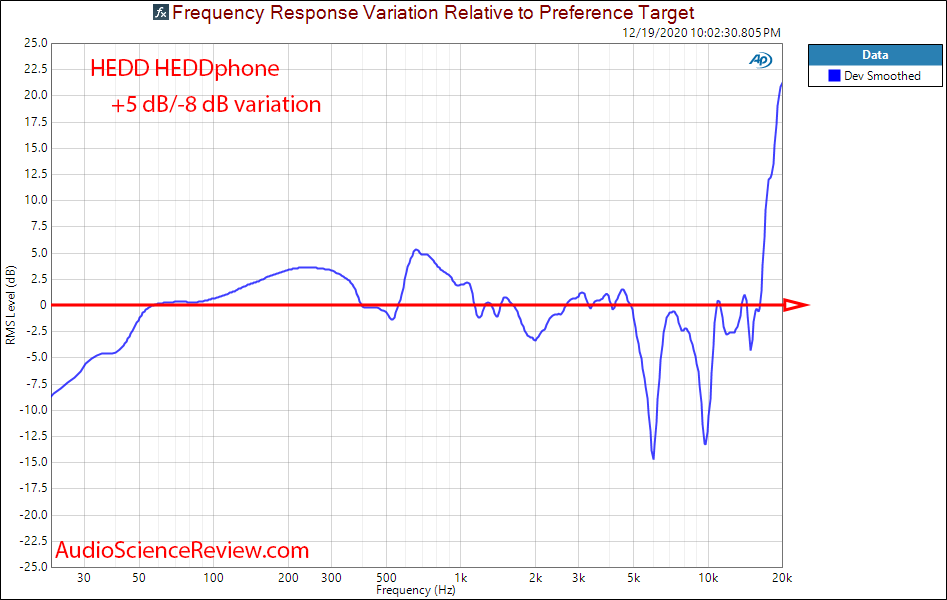 This is a good tool for deciding on equalization. I usually put the cursor on areas of large deviation and then EQ based on that. Note that our response has whopping 13 dB variation from reference. So clearly we are dealing with colorations here.

Impedance is essentially constant and rather low at 41 ohm: 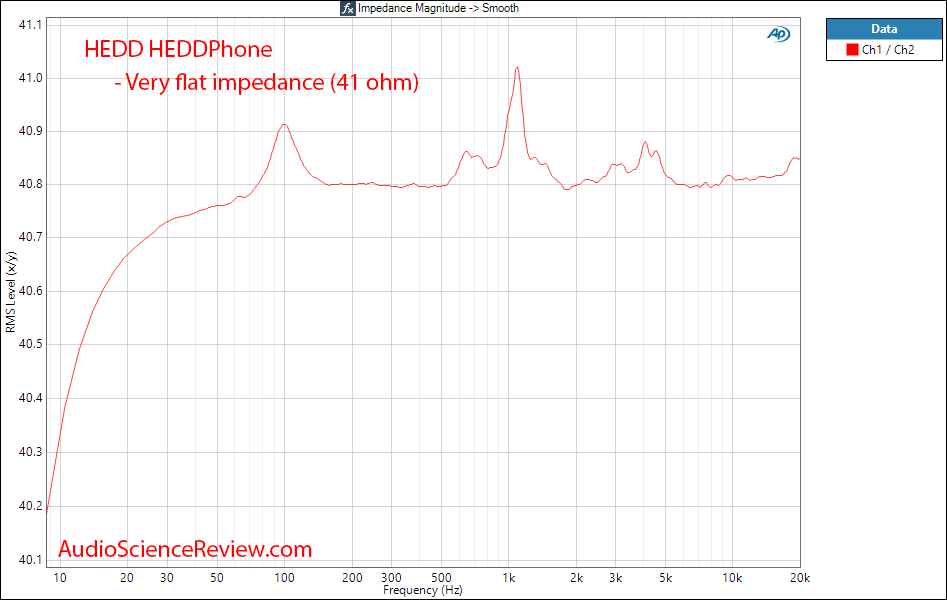 Headphone Listening Tests
My initial reaction was that the HEDD sounded like a speaker with too much room modes/uneven bass response. Couldn't tolerate that for long so pulled out the equalization tools in my Roon media player and went after correcting the low to mid frequency errors: 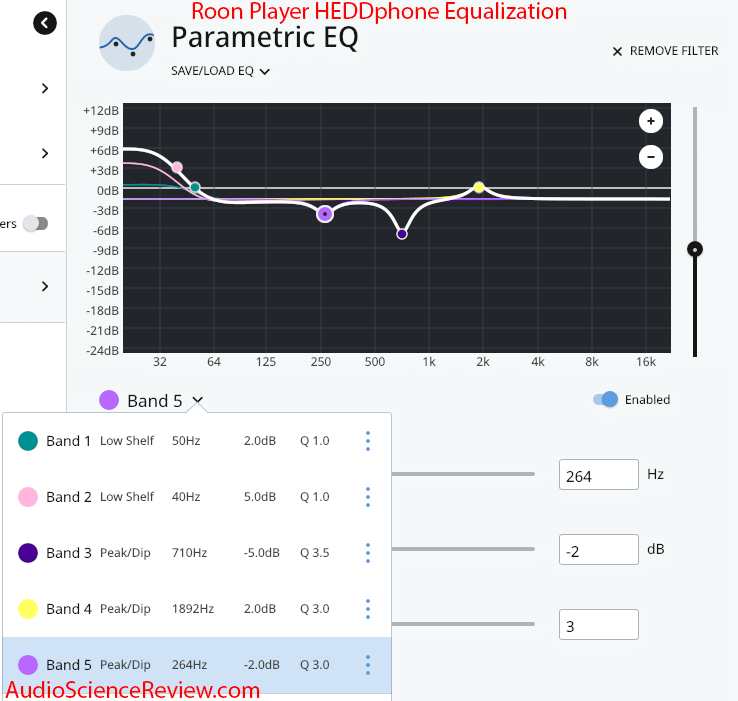 The filter at 250 Hz was borderline. It makes the headphone sound lighter on its feet but some may like the extra bass boost there.

Without EQ, I found the HEDD to sound somewhat bright. With deep bass boost and despite lowering the energy above, the tonal balance improved substantially. There was now excellent, clean bass together with highs that were more focused.

What was remarkable was the improvement in soundstage. Without EQ, the response was maybe a bit better than a typical headphone with its center of your head response. With EQ, a larger bubble was created that started at your ears and travelled up 5 or 6 inches with instruments layering separately in that half sphere. This demonstrates that frequency response has a large role in sound stage even though people think this is a distinct phenomena. I think this has to do with the fact that lower frequencies tend to be more in mono and hence when they are exaggerated as they were here without EQ, they stepped on spatial cues in higher frequencies.

A track that brings out such layering well is the recently released orchestral live album from Sigur Rós, Odin’s Raven Magic and the track Stendur æva:


At around 3:00 minute, incredibly deep synthesized bass arrives that are barely appreciated without EQ. With EQ, they make their presence known wonderfully on the HEDD. My spectrum analyzer on the RME ADI-2 shoots way up from 25 Hz up.

About that high distortion in mid-frequencies, could I hear them? A number of times I thought the highs were not as clear as I remembered in the past but really, this is a very unreliable subjective test. I would need to do a proper AB test to know for sure. So for now, I would say it is not a barrier to enjoyment of the headphone with equalization. Maybe with time we get smarter about what these distortions mean.

Conclusions
The HEDDphone brings fresh new approach to building a headphone. It also presents a few significant compromises from size to weight and uneven low frequency response. While we can't do much about the former two, equalization was quite effectively in lifting the performance of this headphone from nearly fail for such high price to, "wow, this thing than sing!"

I cannot recommend the HEDD HEDDphone. It has too many compromises as is. But with the right EQ, for someone who has other headphones and wants to try something different, it can provide excellent soundstaging/layering of instruments and overall tonality.

NOTE: new rules on what can be posted in review threads will be enforced. So take caution in making generalizations and keep your comments specific to this headphone and its results. General complaints, rants and such will result in sanctions. We have dedicated thread for those. People come here to learn about this headphone and not read about your opinion about this and that.

If you're using 'Equalizer APO':

File under "try before you buy" I guess. Interesting.

FYI Amir During the impedance paragraph you refer to "tube headphones" . I don't doubt someone has considered it, but I don't think it got off the drawing board ;-)
Last edited: Dec 31, 2020
Too many DACs> Too many amps> Too many headphones

Holy mother of distortion.
It's weird that they haven't fixed that issue befor bringing these 1500$ headphones to market.

I assume the 124dB SPL is 114dB SPL again.
Last edited: Dec 31, 2020
People have a tendency to overestimate their hearing capabilities.
Use your ears to listen to music not as an analyzer.
M

amirm said:
About that high distortion in mid-frequencies, could I hear them? A number of times I thought the highs were not as clear as I remembered in the past but really, this is a very unreliable subjective test. I would need to do a proper AB test to know for sure. So for now, I would say it is not a barrier to enjoyment of the headphone with equalization. Maybe with time we get smarter about what these distortions mean.
Click to expand...
Also, people need to understand there is a difference between distortion audibility (detectable with on/off comparisons) and it being so prominent that it takes away from enjoyment.
Loudspeaker Data & Preference Ratings

People have a tendency to overestimate their hearing capabilities.
Use your ears to listen to music not as an analyzer.

Thanks so much.
What a disappointment.
Happy New Year.
OP

solderdude said:
I assume the 124dB SPL is 114dB SPL again.
Click to expand...
It is. I measured this headphone a while back and didn't have that fix. I put a note in the review.
Amir
Founder, Audio Science Review
Founder, Madrona Digital
Contributing Editor, Widescreen Review Magazine
Click for My Technical Background
Master List of Audio Reviews
OP

Using just the 1 channel deviation and 12PPO; I’m on my phone right now, I’ll experiment with both channels and higher resolution.
Click to expand...
Was the export this time what you want from here on?
Amir
Founder, Audio Science Review
Founder, Madrona Digital
Contributing Editor, Widescreen Review Magazine
Click for My Technical Background
Master List of Audio Reviews

Surprisingly disappointing measurements. I think these headphones sounded wonderful. If the deep bass they lacked had been able to be successfully equalized they may have even won my subjective comparison. I noted they do something special to the top end - maybe I found the distortion pleasing? I found female vocals especially captivating. 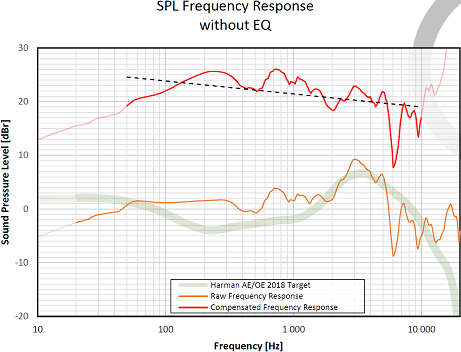 Martin said:
Surprisingly disappointing measurements. I think these headphones sounded wonderful. If the deep bass they lacked had been able to be successfully equalized they may have even won my subjective comparison. I noted they do something special to the top end - maybe I found the distortion pleasing? I found female vocals especially captivating.

Martin
Click to expand...
At least he hasn't reviewed the lcd 3..... Yet (thought of your collection and review post when this got posted).

But, like me I bet you're not minded to sell /swap any of them.
Too many DACs> Too many amps> Too many headphones
M

amirm said:
Was the export this time what you want from here on?
Click to expand...
Yes please. Oh, do you need to export it as an .xlsx with the summary page, and not just a .csv of the actual data? It requires importing of new tabs instead of overriding existing data, so instead of importing and being done with it, I need to do an import & copy/paste, not a big deal.
Loudspeaker Data & Preference Ratings

Thanks Amir. I find the loose correlation between frequency and distortion intriguing. I wonder if that is an AMT thing.
E

It looks like that the leather strap has been added by the owner (this Leather Headphone Strap for Improving Wearing Comfort of Hedd Audio Heddphone 1 | eBay ?) , so not stock.
F

Poor performance, poor ergonomics, poor objective measurements, poor ... Only thing "rich" about it, is the price.
Can we say this is a bad headphones, poorly designed, it is only different and badly so .
A

Thanks for the review.
Interesting comments about frequency response and soundstage, mirrors my own subjective experience.
R