This is a review and detailed measurements of the Carver M-1.5t vintage stereo amplifier. It was kindly sent to me by a member.

The M-1.5t came in an era where rack mounting meant serious business. As a Carver (receiver) owner myself, I remember all the advertising for the M-1.5t. Oddly, there is no power switch anywhere:

I got a chuckle seeing that monster cable tag:

And found the power specs ridiculously complicated but I am sure was appreciated by the aficionadas of the amp: 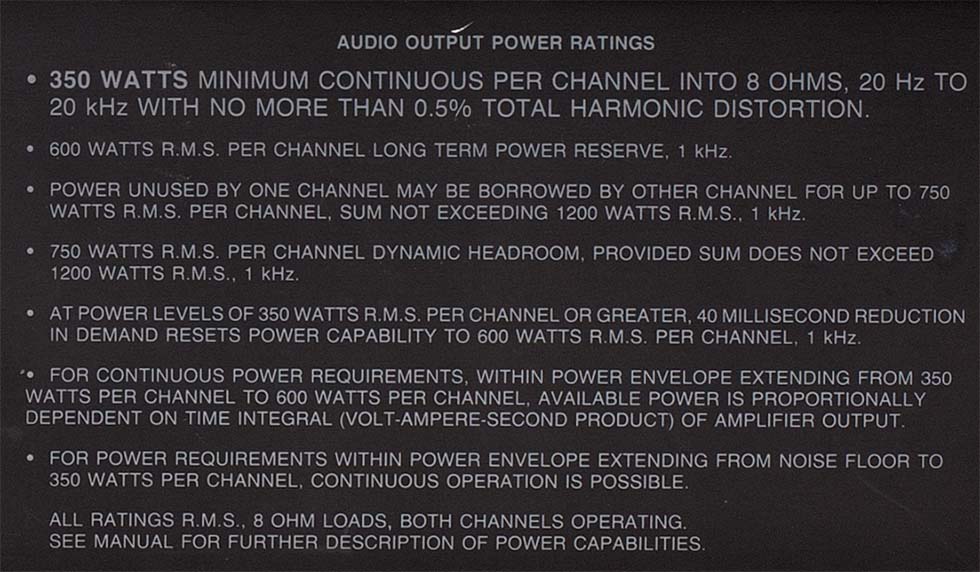 The front LEDs don't light up until it is putting out a lot of power. I liked the top LED which was the limiting lights and nice protection circuit which kept the unit on no matter what.

This amp was part of Carver "Magnetic Field" amplification line which varied the power supply voltage to substantially reduce the size and weight of the transformer. As a result, the unit ran quite cool, maybe a bit warmer than modern class D but still, impressive for the time.

The owner has replaced the capacitors in this unit. Otherwise I think it is untouched.

Carver M-1.5t Measurements
I can see why there is no power switch as the amp did not stabilize for the 14 minutes I measured it: 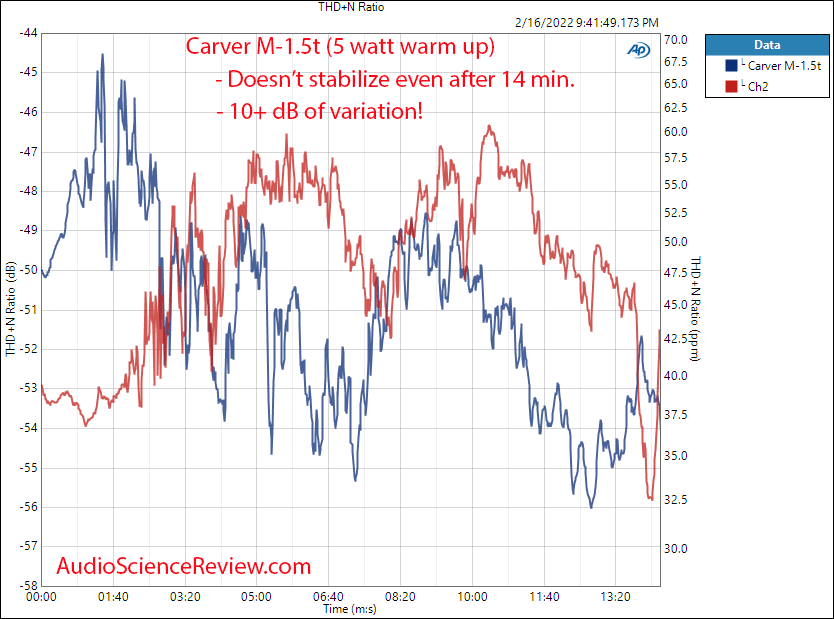 The level of instability is quite large, going beyond 10 db variation in SINAD! I am used to seeing 1 or 2 dB, but nothing at this level.

When I had the unit connected, and before I fed it signal, I could see constant switching noise: 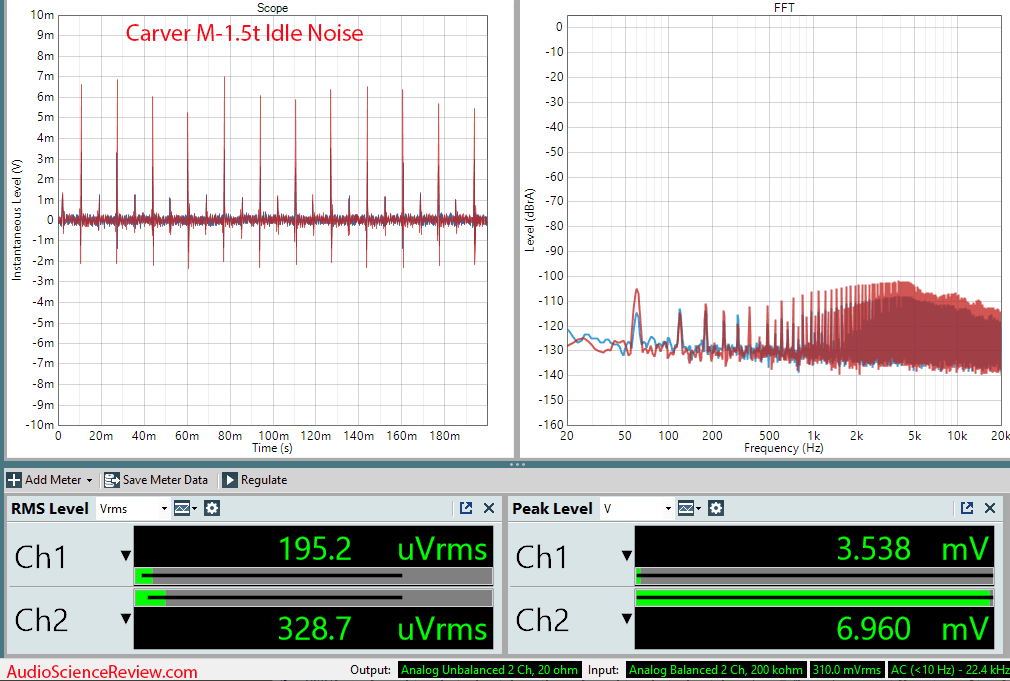 Not sure what that is about.

Here is our dashboard at 5 watts with 1 kHz tone: 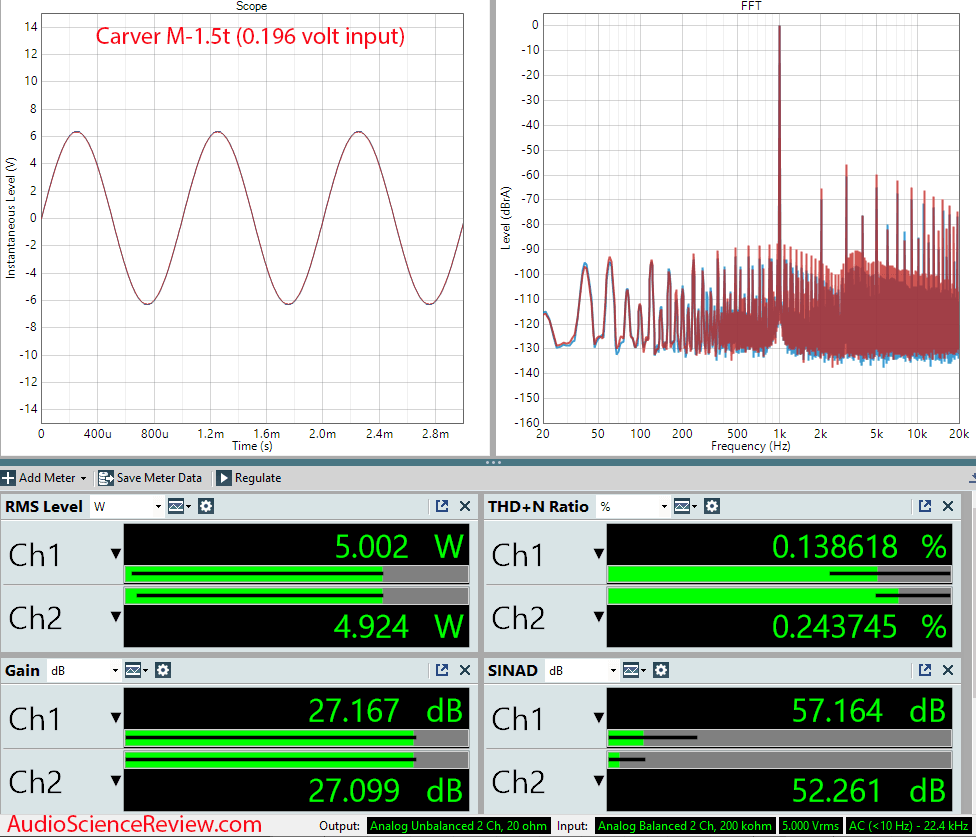 Third harmonic dominates distortion profile and with it, SINAD (relative sum of noise+distortion). Average SINAD of 55 dB for both channels is far, far below that median for all amplifiers I have tested to date (around 79 dB). On top of distortion, we have massive pulse train which oddly starts at 40 Hz. So definitely not very clean.

SNR though was better: 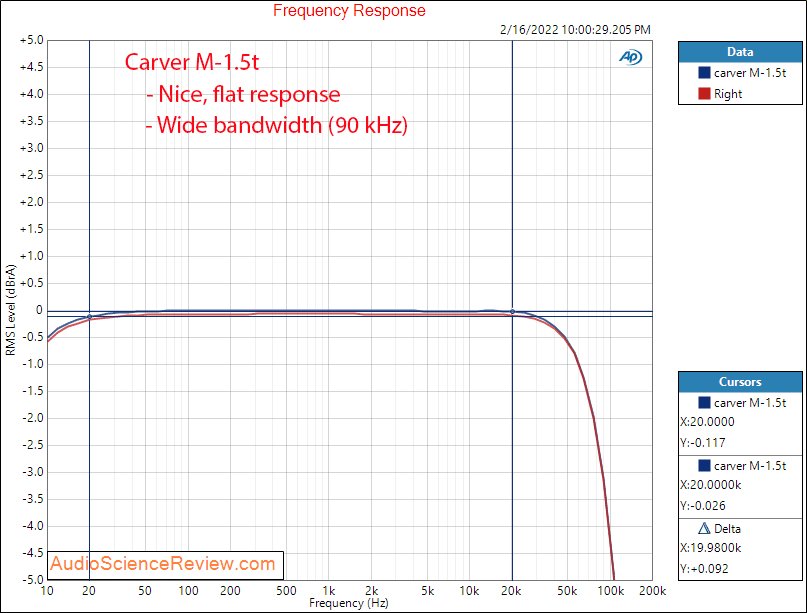 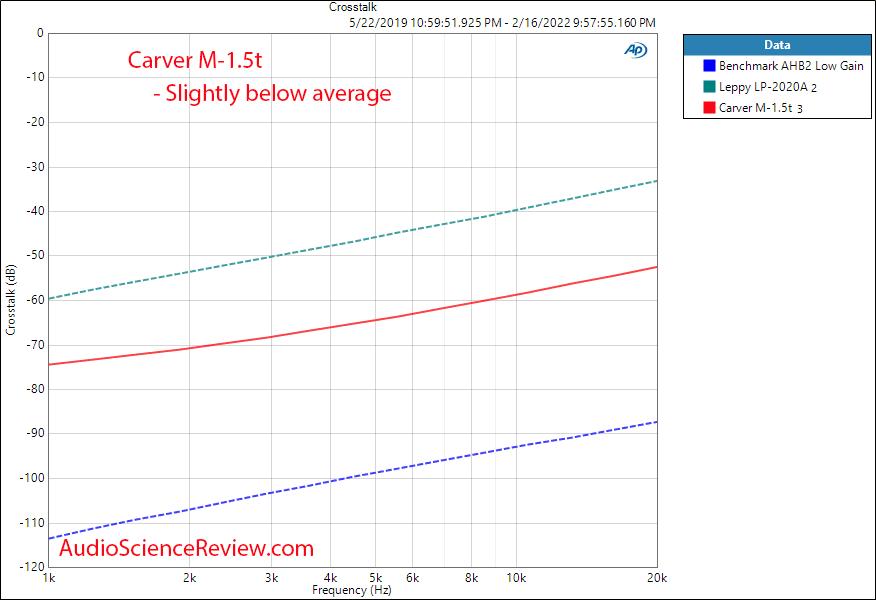 Multitone shows more than usual increase in distortion vs frequency: 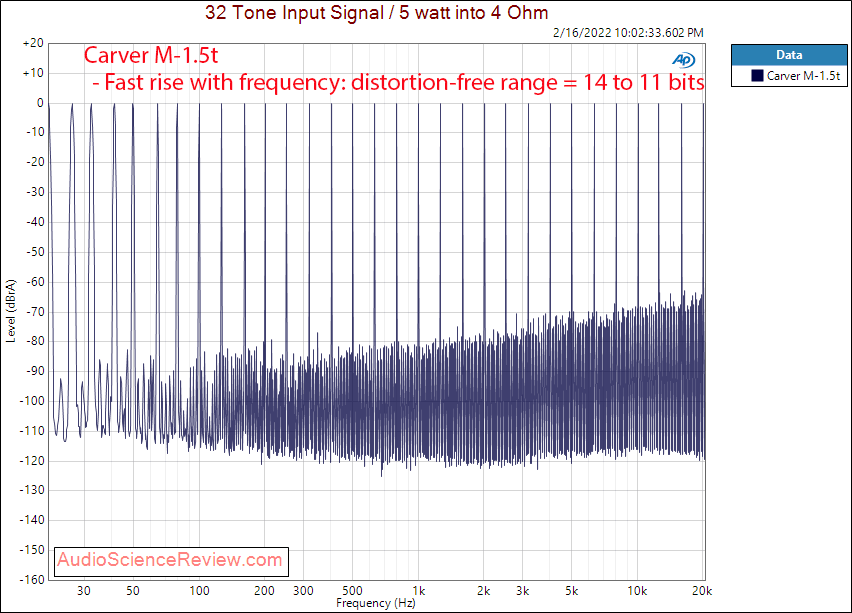 Front of the unit says it has low feedback which is likely responsible for this.

Claim to fame is lots of power so let's see how it does: 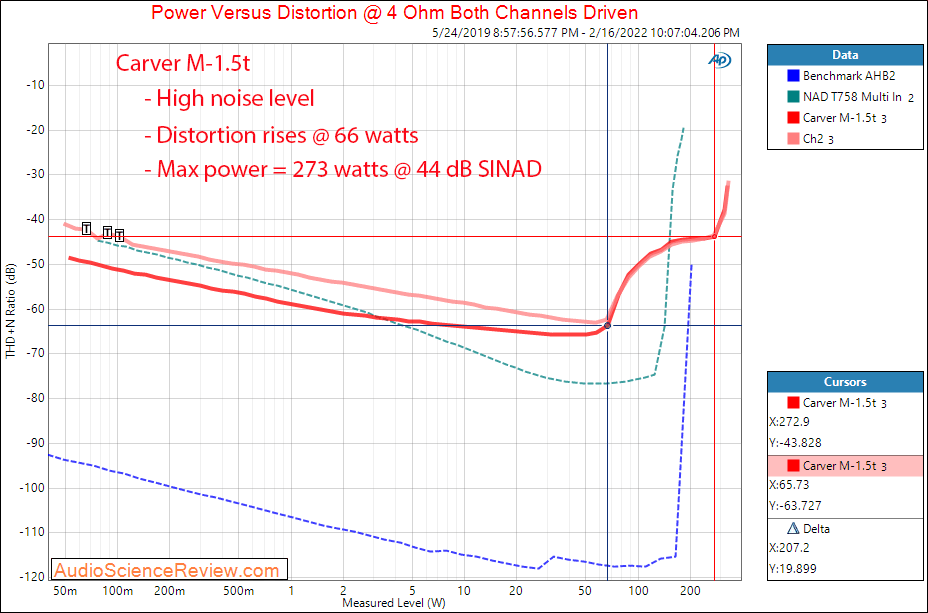 We see a distinct jump in distortion at around 66 watts which must be when it switches to higher power supply voltage. Allowing for copious amount of distortion, there is good bit of power at 273 watts. Here is the same at 8 ohm: 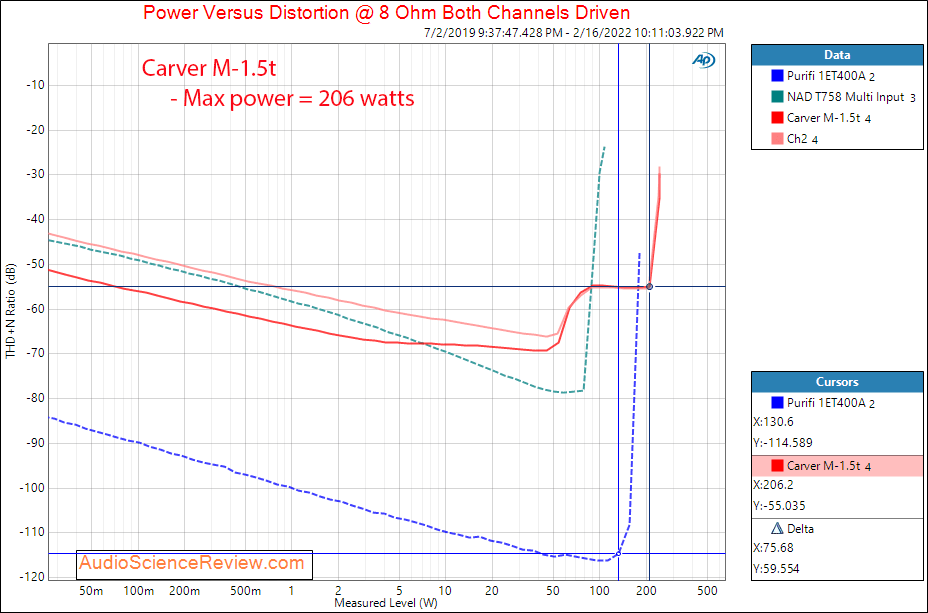 There definitely is a lot of headroom, allowing power to almost double! The 600 watt number and such must have been at higher distortion levels than what I allow.

Testing for frequency sensitivity we again see the higher distortion at higher frequencies: 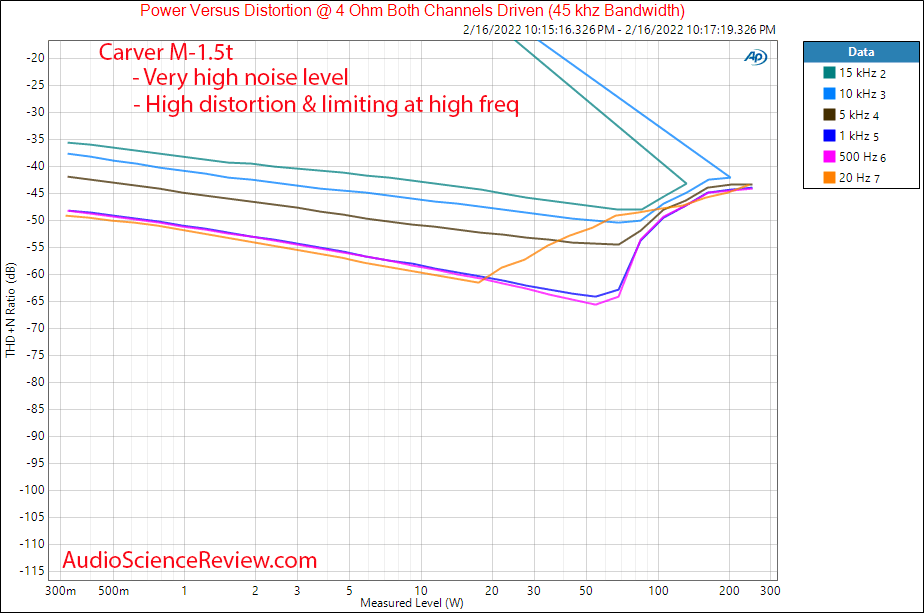 Finally, here is the ultrasonic spectrum: 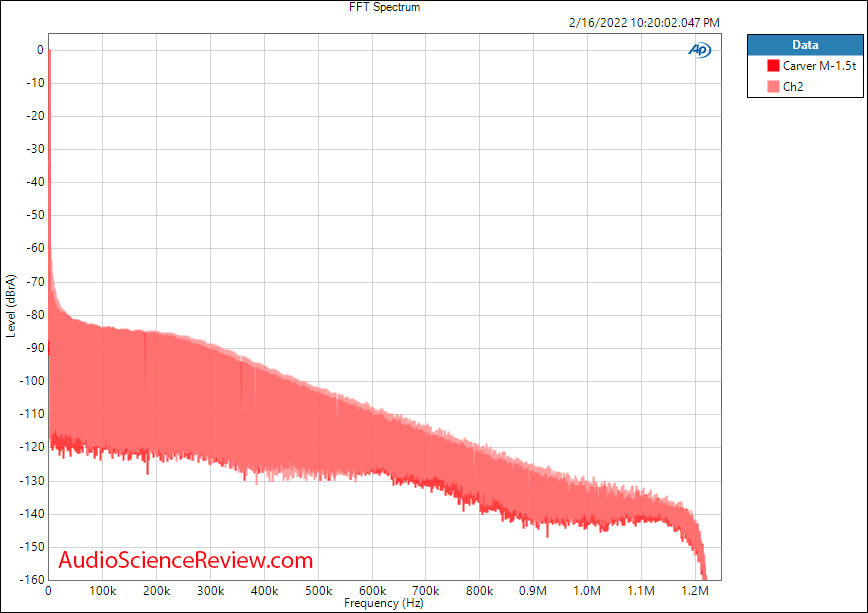 Conclusions
It is nice to test products that were iconic during my youth with state of the art measurements that didn't even exist then. Using that, we see that in noise and distortion the M-1.5t is outgunned by vast number of amplifiers today. However, it produces copious amount of power which would have been even more impressive then. The efficiency rivals class D amps today which was unheard of at the time.

Looking online, I see that non-upgraded but working units go for $500 or so. They seem to be a decent alternative to pro class D amp if you have a soft spot in your heart for vintage amplifiers.

Someone correct me if I'm wrong, I don't find the exact age of this in the review, but I think tha between .12% and .24% THD was not very good then and yes they could measure that. Even just half of that could have been decent if they matched. Yes good power. We don't know if it as been serviced since? The specs are yes a bit weirdly worded, but the are generally better than this.
Last edited: Feb 17, 2022
OP

PeteL said:
We don't know if it as been serviced since?
Click to expand...

As I noted in the review, owner had sent it in to have the capacitors upgraded.
Amir
Founder, Audio Science Review
Founder, Madrona Digital
Review Thread Rules
My Technical Background
My YouTube Channel

amirm said:
We see a distinct jump in distortion at around 66 watts which must be when it switches to higher power supply voltage. Allowing for copious amount of distortion, there is good bit of power at 273 watts. Here is the same at 8 ohm:

Long Live Amir. Your effort to educate the audiofool like me is very much appreciated.
No more audiofool journey. I stop with all benchmark gears.

This is actually more disappointing to me than the Crimson 275 debacle, as this amp was definitely within Bob Carver's supposed area of expertise, and from a time when he was running the company. Does anyone know of any tests that were run at the time this was released, to see if the performance has somehow degraded over time? I'm rather glad I didn't have the money back then to buy one.

Sry, maybe i just not read, but at what year came this to market?
OP

tomtoo said:
Sry, maybe i just not read, but at what year came this to market?
Click to expand...

amirm said:
They seem to be a decent alternative to pro class D amp if you have a soft spot in your heart for vintage amplifiers.
Click to expand...

Recommended without panther after all, yes Nice purist design imo..

"Million $" looks, "headless" performance - so kind of not terrible overall IMHO.
Paired with other vintage gear, probably even good enough.

When you have time, it would be great to ABX a few of those vintage amps versus modern ones.

Ah the good old days.... Not for me.
Amplifier SINAD list

Right when Japenese companies, many of them gone or taken over now, were competing for lowest distortion and far outdid what passes for a decent stereo amp or AVR today. Small wonder engineers with Japanese semiconductor companies were worried that their products were not being used properly in the hands of Western engineers. I wouldn't be surprised, though, if this one was full of American made TO-3 dinos.

Absence of power switch is telling, too. What is the idle power consumption of this beast? Freedom is the freedom to waste. Yeah!

For me, these are absolutely awful, monstruous measurements!!
This is why there is no (headless) panther to be seen: it has been nuked.

bidn said:
For me, these are absolutely awful, monstruous measurements!!
This is why there is no (headless) panther to be seen: it has been nuked.
Click to expand...

The problem is IMHO, should such devices be "panthered" in absolute terms, or relative to their age - this one is 42? years old. In its "market" time, ist was probably on par with most of the competition?

respice finem said:
In its "market" time, ist was probably on par with most of the competition?
Click to expand...

No, the results like this have been poor regardless its age, speaking about audio performance. Horrible noise/buzz background, poor distortion behavior. 40 years ago it was possible to make same good linear power amplifier as it is today. There has been no progress in circuit design and discrete components since that time.
my audiopages

"Objectivists vs. subjectivists discussions make me hungry. It's a medical condition."

Vict0r said:
Thanks for the review, Amir! The amp does look very serious.
Click to expand...

I remember visiting a Hi-Fi store in Brescia in 1988 and listening to this amp…too far back to really remember the fine details but the impression was so-so. Besides, back then I could not afford it and i felt frustrated as a new graduate who made $ 2,000 a month…
You must log in or register to reply here.