Study: Is I²S interface better for DACs than S/PDIF or USB?

This is an analysis of I²S interface to see if it is superior to S/PDIF or USB interconnects for audio DACs. From what I recall, it was PS Audio that popularized I²S for external DAC connections. Phillips (now NXP) had invented I²S years early as an internal protocol to route audio. It was not and has not been blessed for external use over cables. This use has been ad-hoc with no real attempt at any kind of standardization. As a result, schemes for external use vary, some use HDMI connectors, others RJ-45 (ethernet) and so on. Even with the same connector, the wiring may not be the same. You can see the HDMI variation of it here in the devices I tested for this review: 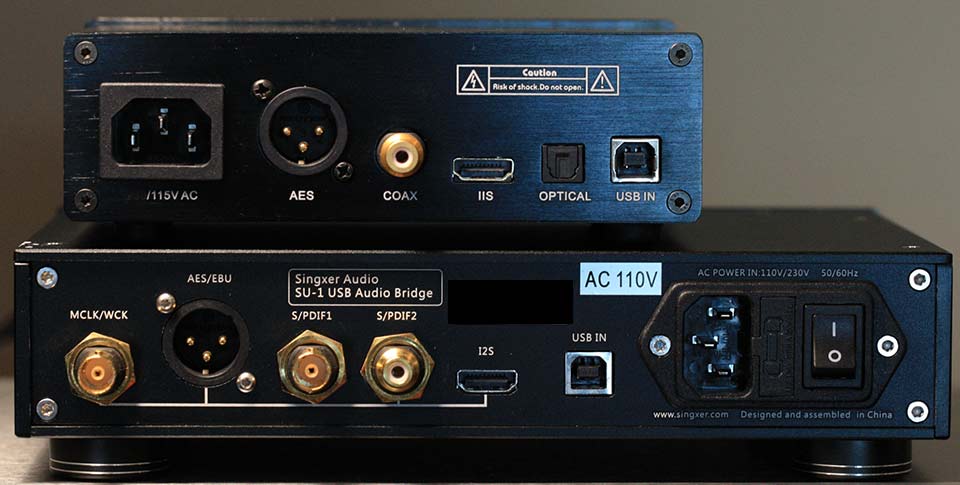 Note that despite use of HDMI connector, there is absolutely no compatibility with HDMI as used in video and home theater. All that is in common is use of the connector or cable, not the language spoken over it.

The motivation for I²S instead of S/PDIF serial bus was to separate the clock and with it, provide some kind of benefit. I let Paul McGowan of PS Audio explain it a bit more:


Toward the end he says I²S sounds "considerably better." Does it? It makes intuitive sense that sending out the clock and data separately would be better but we don't design electronics based on lay intuition. If something sounds a lot better, it better darn show up in measurements and hence this article.

Measurements
I wanted to do this study earlier but lose use of the only DAC I had with I²S input. I am fortunately enough to have the Gustard DAC-X26 with has that input and is one of our top performing DACs. As such, it should be good enough to show any benefit from I²S. I also have the Singxer SU-1 which converts USB to I²S. I just reviewed its functionality in generating S/PDIF. For this test, I will be showing how it performs using I²S.

I started by running my usual dashboard with balanced output of the Gustard DAC-X26 connected to my analyzer and input set to I²S and provided by Singxer SU-1. This is what I got: 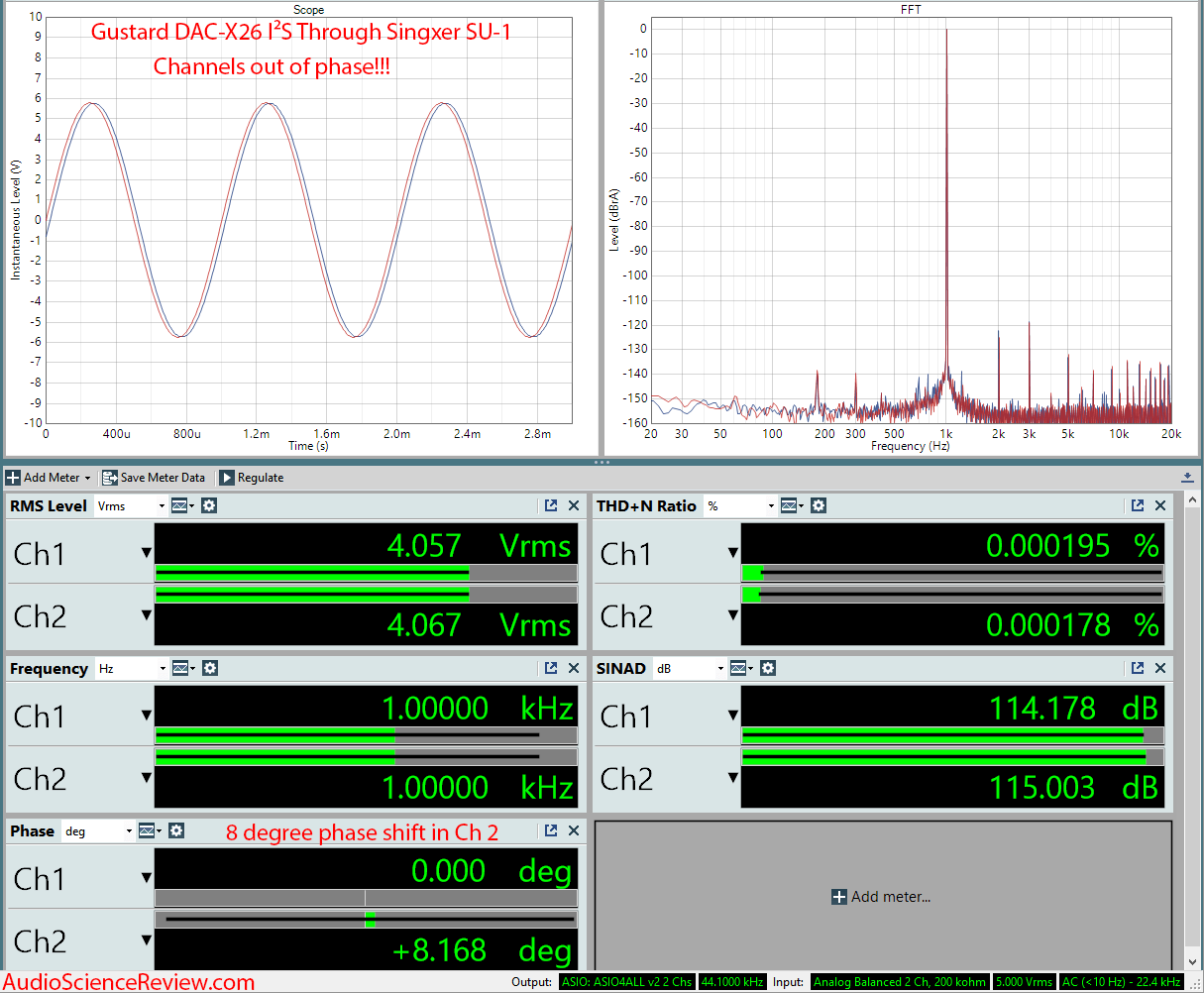 Usually our oscilloscope waveform display on top left is ornamental and not revealing of much. But here, it immediately shows a problem: the two channels are not locked together! There is a phase shift/delay in one channel and hence the reason the Left and Right don't land on top of each other. I added the phase differential meter at the bottom which shows one channel has a delay of 8 degrees! This is not good. A digital to digital interface better be "lossless" in this regard. And what the heck is the benefit of separate clock in I²S is if it causes this kind of skew?

Maybe our DAC is broken. So let's also connect the S/PDIF cable between Singxer SU-1 and DAC-X26 and measure that: 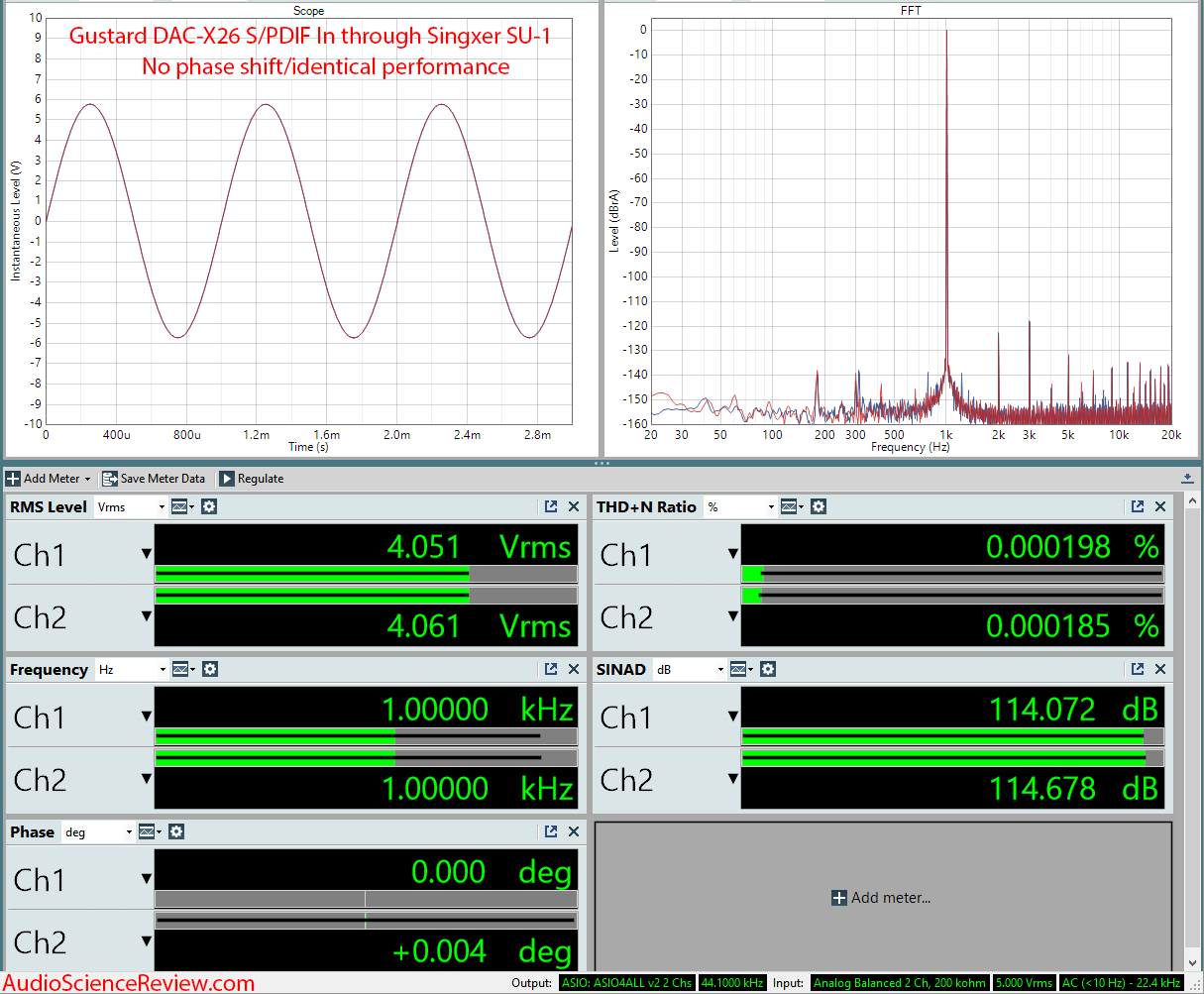 Channels are in lock-step as they should be. We will investigate this further but for now, notice that there is no performance improvement with I²S. Differences are run to run variations.

EDIT: Setting mode switch 6 to on fixed the phase delay.

As it happens, I also have a Gustard U12 USB converter which also outputs I²S. So let's wire that up and see what it does: 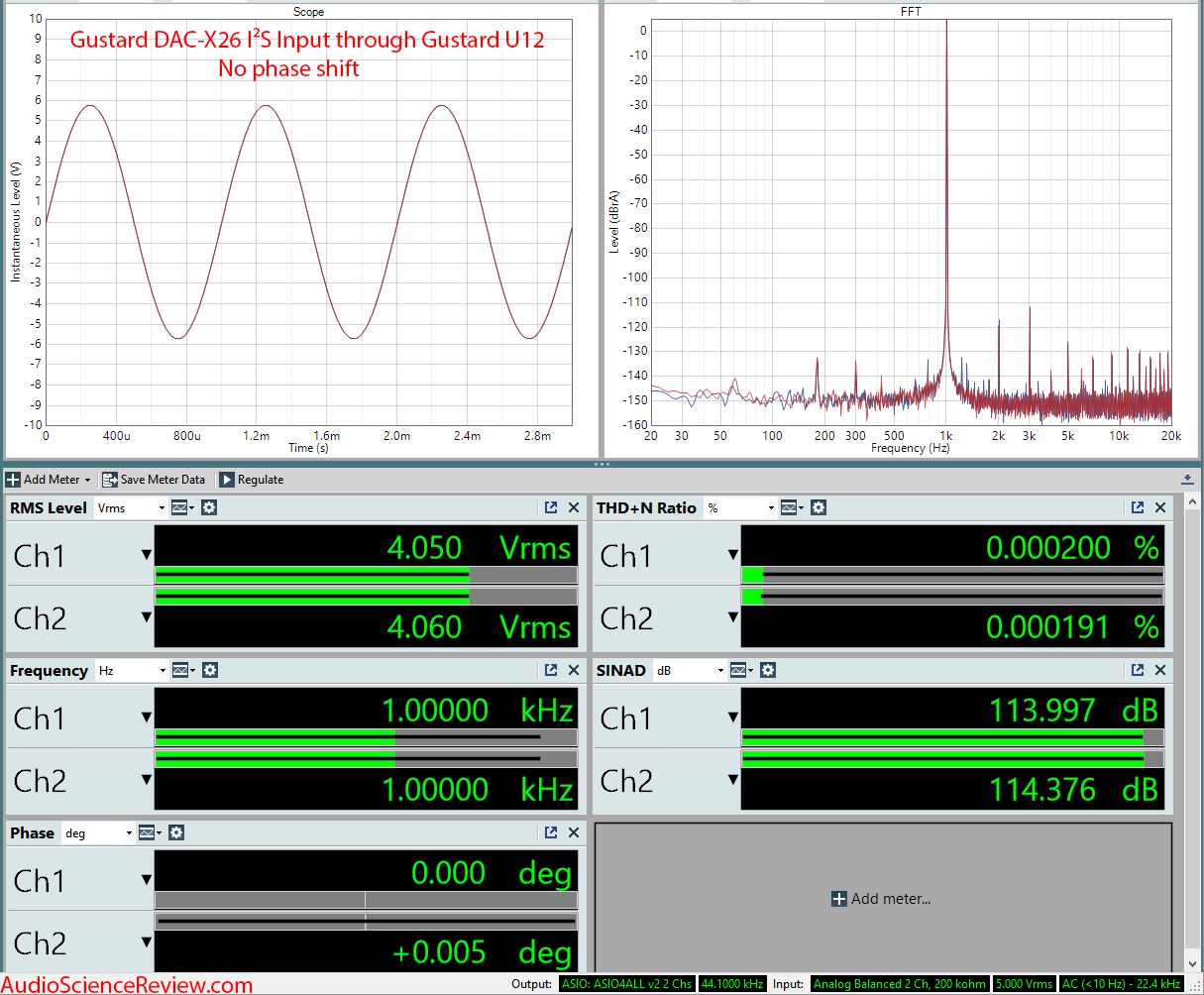 Ah, channels in lock step as they should be. Performance is the same (again, ignore small changes). So while I²S connection doesn't break anything, it doesn't provide any measurable benefit either.

Since the U12 works better, let's use it to run a jitter test, comparing I²S to S/PDIF on the output the Gustard DAC-X26: 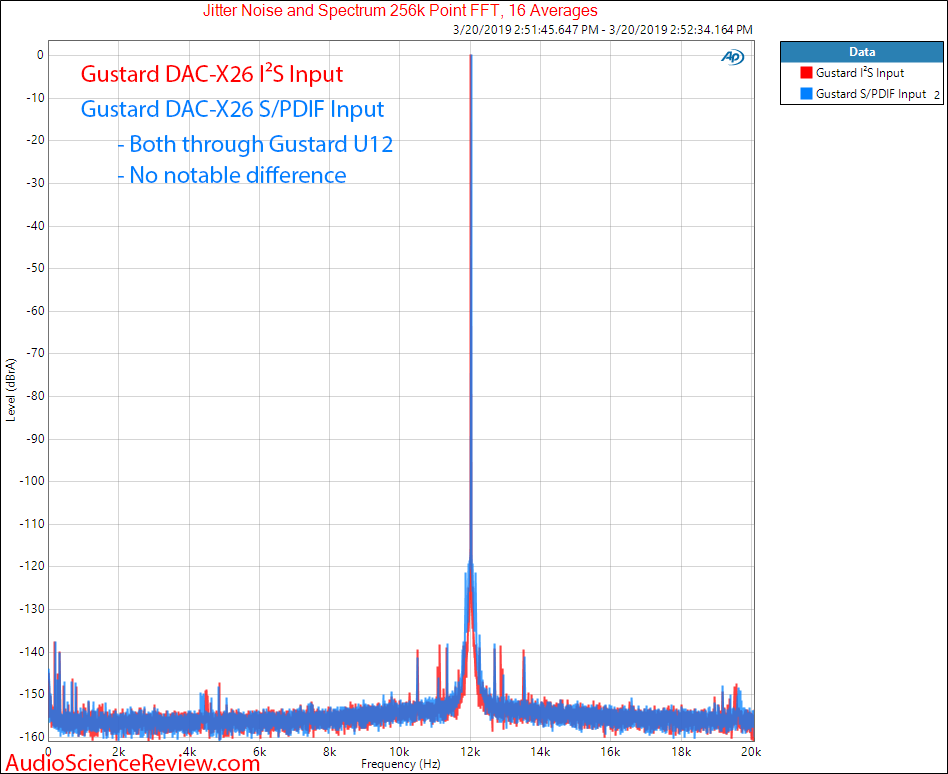 Again, we have tiny variations but nothing of not let alone a change that is audible.

Conclusions
It is remarkable how as non-technical audiophiles, we quickly play engineer and decide what is technically better. "Oh, the clock is separate in I²S so it must sound better." Do you even know what a clock is? How about clock skew? How about perils of taking a standard for moving an inch or two inside some gear and making it travel dozens of inches externally? You think that doesn't do anything bad?

If you want to use lay assumptions, think of how S/PDIF is decades old and by now, folks have figured out pretty well how to extract the clock out of it and deliver excellent performance. Such is the case here. S/PDIF has universal compatibility to boot which I²S does not have.

So Paul McGowan, please don't spread misinformation about I²S sounding better. Start by showing us measurements that demonstrate anything improving and if so, why PS Audio gear doesn't have good enough S/PDIF performance to need something better. And then, point the camera at yourself, connect both inputs to your DAC and have someone else switch inputs and see if you can tell the difference. Since levels don't change, it is dead simple to conduct a blind test.

Bottom line, please don't rely on fantasies like I²S improving audio performance. Insist on measurements being provided to demonstrate audible change in the output of the DAC -- the thing you hear. Don't accept hand gestures as evidence. And certainly not any appeal to a lay person's intuition as a replacement for proper data providing proof.

I will test I²S more in the future as I get other devices with it in there. For now, don't waste a penny even thinking about it, let alone using it.

amirm said:
There is a phase shift/delay in one channel and hence the reason the Left and Right don't land on top of each other. I added the phase differential meter at the bottom which shows one channel has a delay of 8 degrees! This is not good.
Click to expand...
Is the phase delay you measured frequency dependent? Let's see the result at 20Khz. Are we seeing the inherent I2S serial L/R data not being compensated for?
Ricky Roma: I subscribe to the law of contrary public opinion... If everyone thinks one thing, then I say, bet the other way...

Every PC uses PCIe, SAS, and SATA signaling that must resolve into the ps level and somehow all those gazillion bits work OK even when the clock is recovered from the data... We routinely run tests that must run anywhere from 24 hours to one week with zero bit errors. A separate clock has a long list of pros and cons but a decent implementation should just work.
Don
"After silence, that which best expresses the inexpressible, is music" - Aldous Huxley
M

Just for fun, do you have a Toslink and HDMI of decently long length (15ft) that you can use, to see if that shows any benefit?
Loudspeaker Data & Preference Ratings

amirm said:
From what I recall, it was PS Audio that popularized I²S for external DAC connections.
Click to expand...
Recently. Originally by Audio Alchemy and Sonic Frontiers. I still have some of the Perpetual Technologies stuff in my closet. Anyone interested in them?
Last edited: Mar 21, 2019
Senior Contributing Editor, Stereophile
G

I like to hear this even if I am a (happy?) owner of a Gustard U12. AFAIK and completely subjectively, it seems the Gustard X12 dac I am using with I2S sound better than with usb directly. Will try again to verify, if I can, whether this is really the case or not. Not saying the I2S sounds better per se, but maybe the USB input of the X12 is inferior. Maybe.
At least, the Gustard U12 is very convenient because it allows to connect more than one dac with one usb connection to a streamer.
Anyway, after there readings, I don't think I will be spending time, let alone money, on new interfaces.

restorer-john said:
Is the phase delay you measured frequency dependent? Let's see the result at 20Khz. Are we seeing the inherent I2S serial L/R data not being compensated for?
Click to expand...
One channel is lagging one sample (22us) behind the other, from a quick eyeballing of the delay. Haven't seen this for a while, very old DACs/CODECs like early Cirrus chips had this kind of error...
G

Adding an I2S input was a way to future proof a DAC which could accept high DSD rates I think, but now USB interfaces caught up so it makes less sense.

The left/right phase shift is very close to one sample interval at 44.1 kHz. Probably not a coincidence. My guess is that the converter accidentally shifting one channel by a sample. A digital capture could easily confirm this.
G

Edit: Sorry, I meant ESS ASRC/jitter correction off when the DAC is fed the data over I2S, ie the DAC runs in sync mode.
Last edited: Mar 21, 2019
OP

Are there any benefits over Spdif or USB for let's say an budget Rpi DAC?

gvl said:
Adding an I2S input was a way to future proof a DAC which could accept high DSD rates I think, but now USB interfaces caught up so it makes less sense.
Click to expand...
Given that DSD/DSF data can be enveloped (tunneled) and transmitted using DoP, I don’t think we need I2S. So it’s DoP that future-proofs the DAC
G

DuxServit said:
Given that DSD/DSF data can be enveloped (tunneled) and transmitted using DoP, I don’t think we need I2S. So it’s DoP that future-proofs the DAC
Click to expand...
DoP is limited to DSD64 over SPDIF.

KSTR said:
Haven't seen this for a while, very old DACs/CODECs like early Cirrus chips had this kind of error...
Click to expand...
Single D/A converters exhibited a similar issue with time division demultiplexing, hence wanting to see at 20KHz signal.
Ricky Roma: I subscribe to the law of contrary public opinion... If everyone thinks one thing, then I say, bet the other way...

gvl said:
DoP is limited to DSD64 over SPDIF.
Click to expand...
What about over USB?
G

DuxServit said:
What about over USB?
Click to expand...
It has been until recently USB was limited to 384kHz rates, which limits DoP to DSD128. Even latest USB interfaces are maxing out on 768kHz or DSD256 DoP. Some DACs can do DSD1024 over I2S, I think the latest XMOS can do DSD1024 native. Why anyone would need such high rates is another question.

I2S over whatever cable/connector is a nonstandard interface, but it can be better over substandard SPDIF interfaces, like those using just a chip receiver with its typical 50 pS jitter.... For DACs with advanced reclocking/buffering, like mine, it will be inferior and therefore useless.... I have had many poeple asking for it, but why add support for a nonstandard interface when there is no advantage to it ?
Søren
D

Arnandsway said:
Are there any benefits over Spdif or USB for let's say an budget Rpi DAC?
Click to expand...
Only in implementation. The RPi has I2S wired straight from the SoC to the GPIO header. If you’re going to make a DAC that’s a Pi hat, I can’t think of much reason to not use it, as it’s right there and ready to use.

I thought that this was a gimmick the minute i saw it advertised on a DAC.
My SMSL xUSB had the output, but I sold that today. I have no use for it and never owned anything that uses that interface (which as you said isn't even standardized).
I never thought that it could offer better performance than USB, and my hunch was confirmed here!