This is a review and detailed measurements of Massdrop's Alex Cavalli Liquid Carbon X headphone amplifier. It is on kind loan from a member. I think the retail price was $299 but since the drop is over, I am not 100% sure. Someone should comment if that was not the case.

The Liquid Carbon X is covered in semi "rubberized" paint which while feels nice, tend to show any dirt or dust. So keep a rag next to it if you want it to look good.

Overall, it is a thumbs up on design, look and feel.

For power, it comes with what looks like a laptop switching power supply, producing whopping 30 volt output! I think this is the highest voltage power supply I have seen on any desktop audio product.

Let's see how she does in measurements.

Measurements
Let's start with our usual dashboard measurement in "unity gain" (2 volts in, 2 volts out): 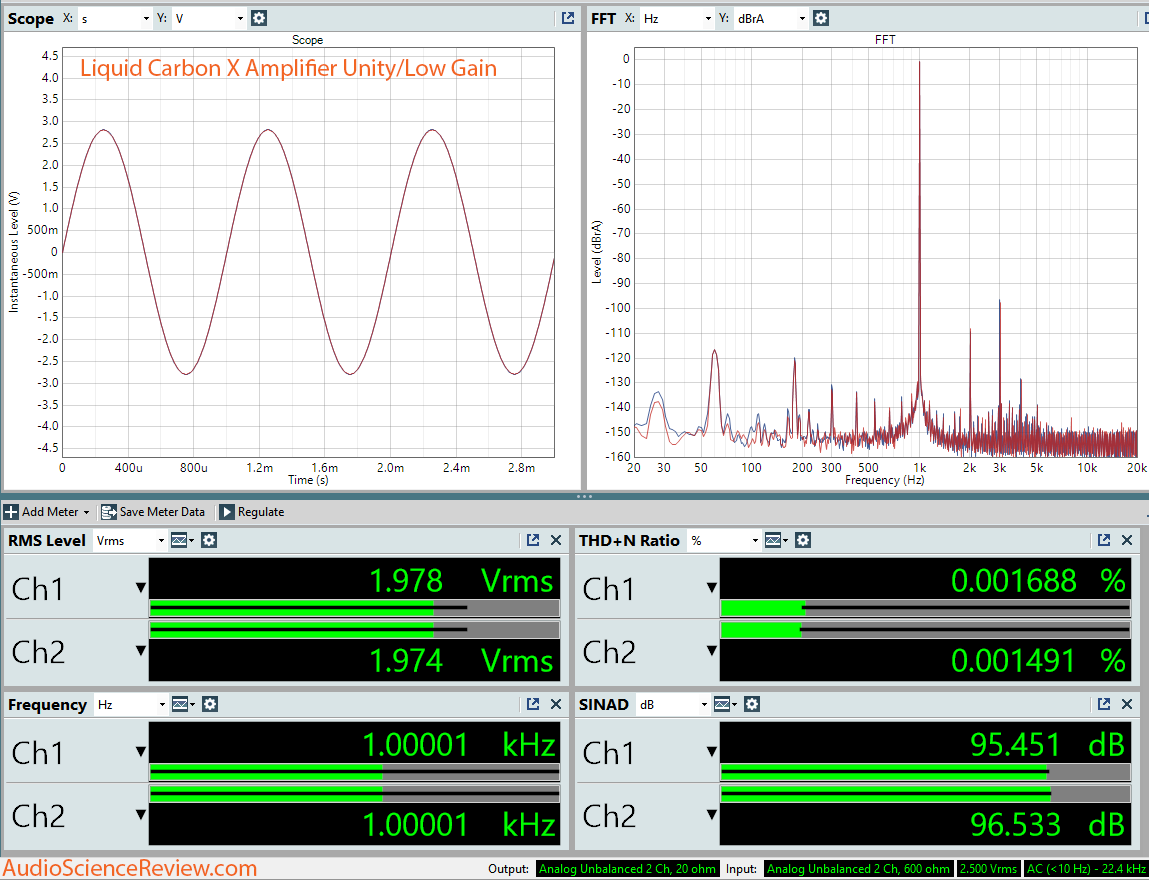 This is not much to write home about. It means that it underperforms most DACs and becomes the dominant source of distortion given the SINAD of 96.

For this review, I will be comparing the Liquid Carbon X to Arcam rHead since it has similar features. So I decided to set the levels such that it compares to my review of Arcam rHead and compare: 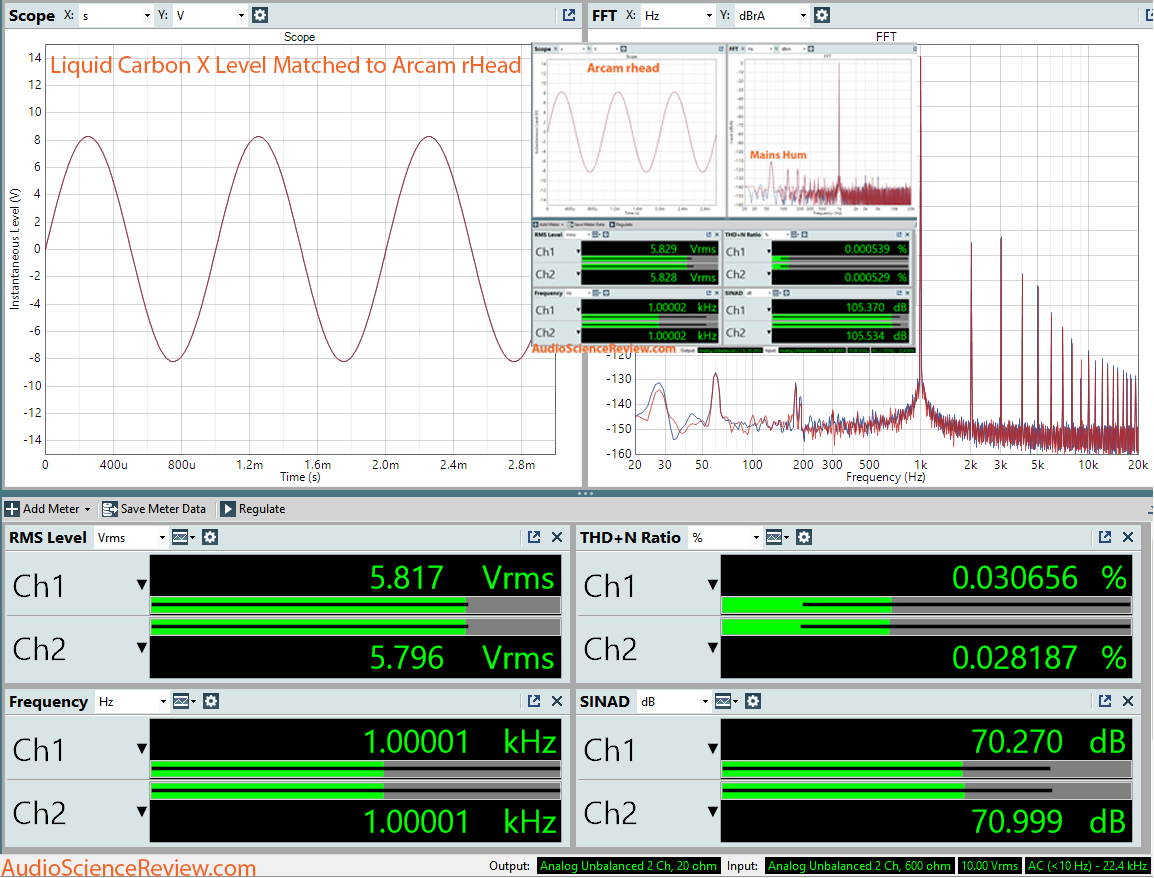 Yuck. We are not in even in the same neighborhood. Despite rather high level of output power, the Arcam rHead manages a SINAD of 105 whereas the Liquid Carbon X sinks to just 70 dB!

Measuring power at 300 ohm we see the same situation: 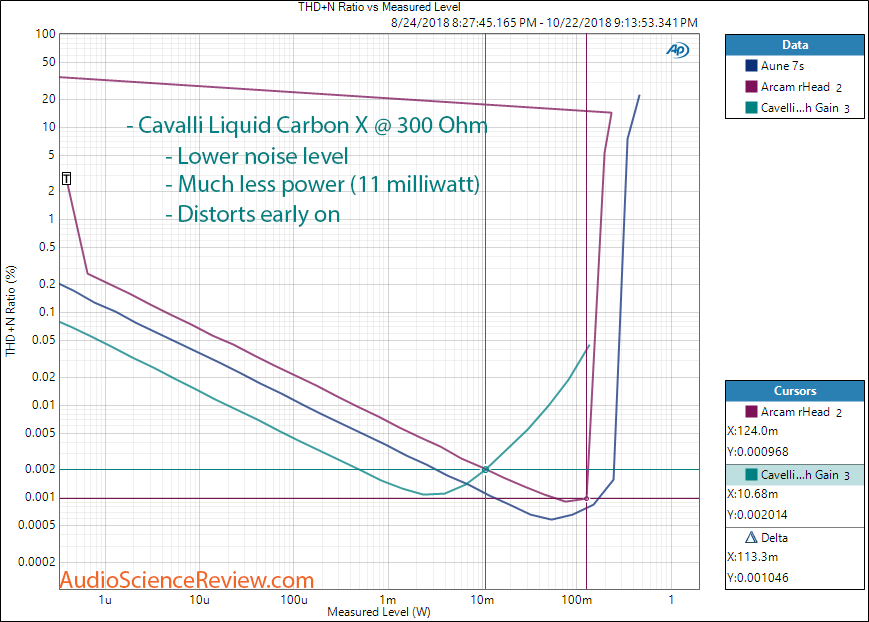 The Carbon X starts to lose its breath around a few milliwatts. It crosses the Arcam distortion curve at 11 milliwatt while the Arcam cruises to higher power at even lower distortion @120 milliwatt. Noise level is lower though throughout that range.

Oddly, the noise advantage goes away when we switch to 33 ohm load: 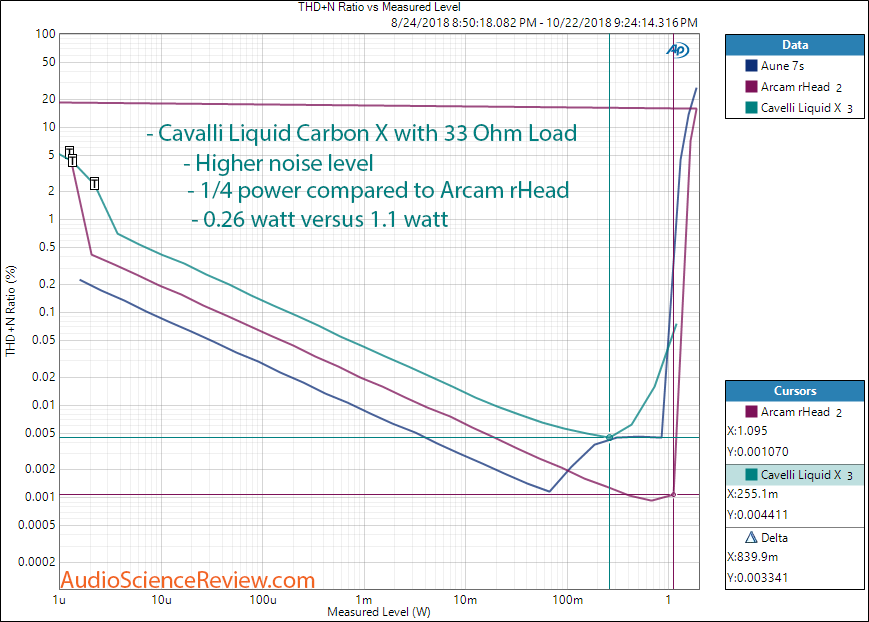 The only power ratings from Massdrop are at 50 ohms so let's see how the Carbon X does in both single-ended and balanced: 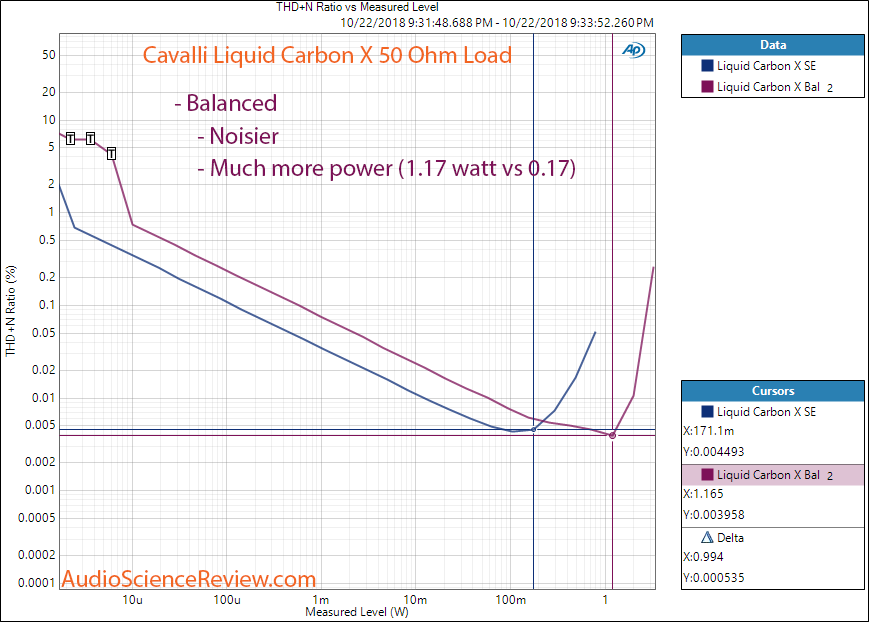 Massdrop's spec for single ended is 0.7 watts. I am not remotely getting that. I always drive both channels at once so maybe they measured one channel at a time.

Same is true of balanced output in that it is half as much of Massdrop spec. That aside, you do get a lot more power in balanced at the expense of higher noise. Trade off is worth it though.

Output impedance is essentially zero which is excellent: 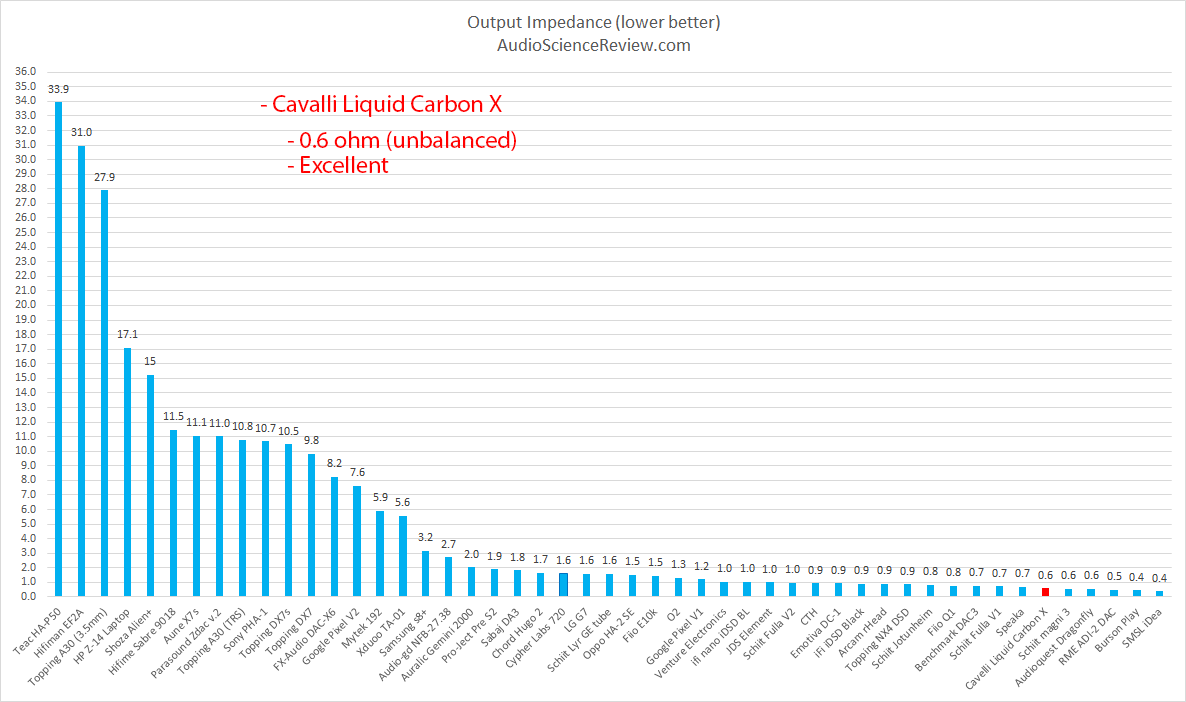 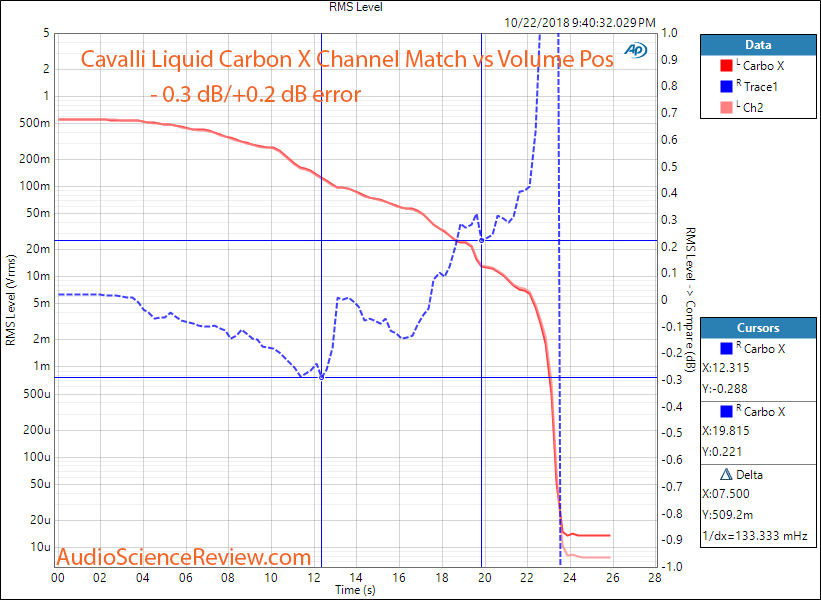 Again, Arcam rHead leaves it in the dust with near perfect channel balance.


Listening Tests
I used the setup in the picture with Topping DX3 Pro driving the Liquid Carbon X at full level. I started with my Sennheiser HD-650 headphones. Here, up to about 2:00 o'clock in volume control, the sound was fine and reasonably loud. After that, it became higher pitched and somewhat muddy, indicating onset of distortion.

I then switched to HiFiMan HE-400i and given its lower impedance, the unit became fairly loud at 12:00 o'clock. Past that point though, distortion again became obvious with emphasis in higher frequencies and generally unpleasant.

Conclusions
The Massdrop Cavalli Liquid nails the industrial design and branding. The marketing department gets an A+ here. Alas, from engineering point of view, this is an average effort. Power levels are modest as desktop products go.

Subjectively, the Liquid Carbon X simply does not have enough clean power for my taste. The purpose of such a large desktop units should be to have ample amount of power to throw any headphone at it. That simply is not the case in single-ended mode. The amplifier distorts before the headphone which is no good.

I don't have a balanced headphone to test with it. That should be a more satisfying experience given the higher power output.

As I have noted, the Arcam rHead performs much better. It is much more expensive if you pay full list price but you should be able to find it on the used market for same cost as the Liquid Carbon X. Another choice -- if you don't mind the high output impedance -- is the Aune X7s. It is the same price at Liquid Carbon X but with a lot more clean power.

In summary, whatever magic people assume behind this branded product escapes me, both in engineering and subjectively. Nothing is badly broken but there simply is not enough "oomph" to make it for me. So I can't recommend it.

As always, all questions, comments and criticism is welcome.

Well, I feel relieved that I did not buy this!

Still looking for an amp (preferably with with a nice onboard DAC) to use both my headphones and IEMs with...

Wow. That is pretty bad! The Cavalli brand seems to be quite overhyped! Clearly, the marketing department should get an A+!
R

Another product I almost bought and am now glad I didnt. This site is great for easing my regrets!

In your subjective impressions you mentioned that your headphones kind of take on a bright tinny sound when you hit the distortion, is that usually how distortion presents itself?

I ask because I have quite frequently noticed that effect when I was using weak amps or connecting headphones directly to my PC motherboard and its nice to be able to finally have a technical explanation for it.

Thank you very much Amir.
I really hope the Massdrop THX 789 amp delivers its power spec both channels driven.
OP

Raimei Templar said:
In your subjective impressions you mentioned that your headphones kind of take on a bright tinny sound when you hit the distortion, is that usually how distortion presents itself?
Click to expand...

Yes, if you look at the FFT in the second graph you see why: 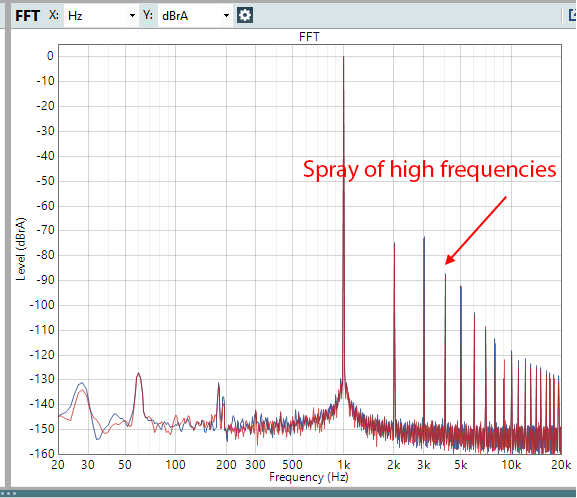 We have our main tone at 1 Khz. But with distortion, we now have a bunch of harmonics which keep increasing in frequency. That naturally increases the level of high frequencies, making the sound bright and tiring.
Amir
Founder, Audio Science Review
Founder, Madrona Digital
Contributing Editor, Widescreen Review Magazine
Click for My Technical Background
My YouTube Channel
OP

Thanks for your response! Good to know I was not imaging that effect! I always describe it as sounding diffuse. Some of the amps I tried hit that effect really early as well. Its quite frustrating when you get an amp that is claiming to put out a lot of power that distorts way before it comes anywhere near the maximum amount is rated for.

I wonder if this is why many audiophiles gravitate towards darker/treble light headphones. They like to crank the volume and the distortion from their poor amps makes more neutral headphones sound super tinny/diffuse.
OP

I am so hyped for the Dx3 Pro Review Any information when it will be released?

Wowsers! How did you manage to get the DX3Pro?? It's not even released yet, very anxious to see the review. To bad it only has a 3,5mm jack I was kinda hoping for a 6.25mm as well.

I feel bad for the suckers that bought Cavalli at full price. Even the suckers buying these Massdrop/Monolith versions are getting ripped off.
Ignore list (so far): @NorthSky, @graz_lag, @Patrick1958, @noel_fs, @Bluespower, @Jimster480, @stereo coffee, @cacliu, @yotomeczek, @gwertheim

Before anyone complains that the RHead is much more expensive than the Liquid carbon, its price has dropped to $220 levels nowadays. As long as you can order it from the UK and import it, it's relatively cheap. Cheaper than the liquid carbon...

derp1n said:
I feel bad for the suckers that bought Cavalli at full price. Even the suckers buying these Massdrop/Monolith versions are getting ripped off.
Click to expand...

To be fair, it's not like they had any prior experience or warning that they wouldn't be good. Calling then suckers seems excessive. That's why Amir is doing all of this, so people will be informed.

I just hope the THX is good, but again, someone had to buy it so we could find out.
“…we falsely believe that the mind of everyone we interact with is like our own in its elements and rules, but not in its detailed contents” (Daly & Wilson 1997.)
H

Thank you for the review Amir! Considering the results of the CTH, this is about what I was expecting to see. It's a shame that such a well presented product doesn't perform at higher levels. I feel like Massdrop had a good opportunity to set the bar of performance for a reasonable price and they failed. It really does make me suspicious of any Alex Cavali branded device though.
R

But it measured according to advertised spec right, so why feel bad for anybody?
H

rajapruk said:
But it measured according to advertised spec right, so why feel bad for anybody?
Click to expand...

Massdrop doesn't advertise many specs but unless I am mistaken it didn't actually meet the specs they do advertise.

You are correct Amir!

Question: Did you redo the tests for the Arcam rhead with the Topping DX3 Pro driving it? If not, your results that show in comparison to it aren't actually scientifically comparable.

I know it's probably not going to make a real difference, but as these are measurements, you want your data to have as few variables as possible. Since you own the Topping DX7s, I would use that for the foreseeable future with amps until announcing a paradigm shift to something else, such as the DX3 pro or whatever you decide on. However, if you do change, I wouldn't use prior measurements (driven from different DACs) in comparison.

Just a suggestion if you want to guard against scrutiny.
Last edited: Oct 23, 2018
“…we falsely believe that the mind of everyone we interact with is like our own in its elements and rules, but not in its detailed contents” (Daly & Wilson 1997.)
You must log in or register to reply here.