High power spectrum measured with high dynamic range of the measurement. Though SINAD here is 101.1dB and THD is well below 0.001%, the spectrum is not clean. It has a lot of residuals of SMPS operation. Also please note the rise of noise floor and distortion components above 22kHz, this is the reason of worse THD+N results when measured with higher BW than 22kHz. I think it is fair to mention these facts. 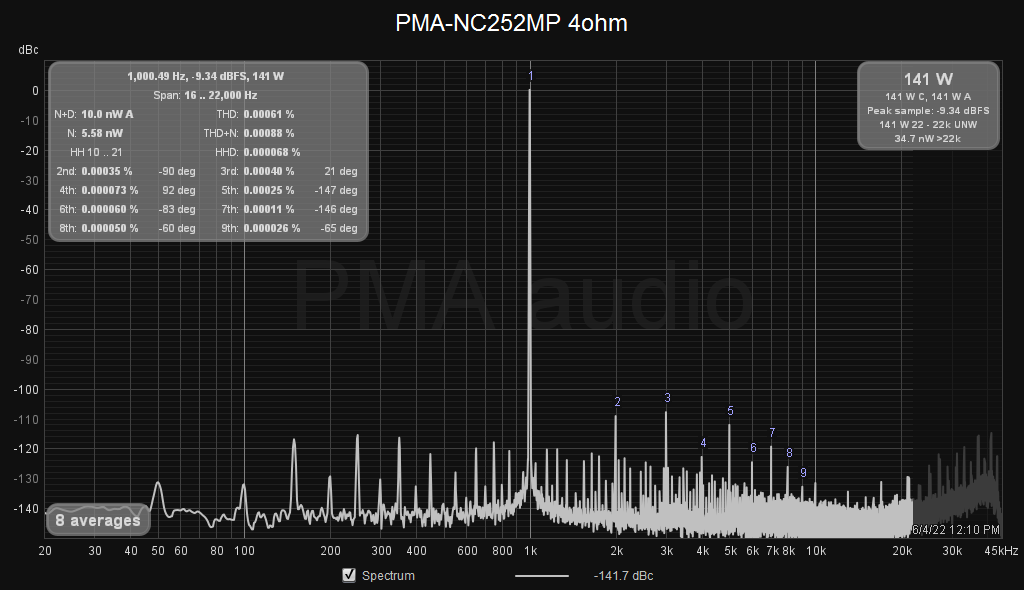 Dlomb11 said:
Seeing these very interesting measures makes me wonder if there are more valid amplifiers in terms of price / performance ratio. Unfortunately, there are no such comprehensive analyzes on the web ...
Click to expand...

Hello, thank you, you are right that there are not so many deep analyses in the web, but hopefully @amirm makes a lot of useful reviews and measurements where we can see almost same results. Maybe not the same plots, however we can decipher it from his posted measurements.

Re SMPS mains residuals and not perfectly clean spectra of NC122MP, NC252MP or NC502MP modules, we can see almost same or very similar results here in 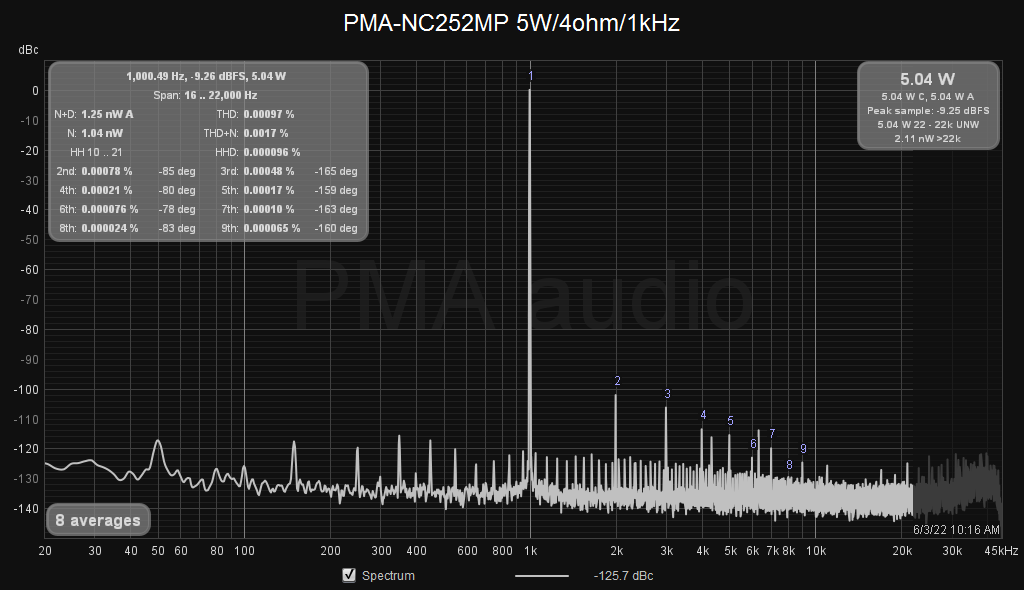 As for high frequency non-linearity of the mentioned modules, it is shown in Amir's measurements like these

Regardless these imperfections, the price/performance ratio of those NCXYZMP modules remains excellent. Mains related residuals are because of the close proximity of SMPS and amplifier circuits on the same PCB board, high frequency non-linearity is a result of feedback loop transfer function. Improvements are possible with separated SMPS supplies and even more sophisticated feedback loop as in Purifi 1ET400, however you have to pay much more money then.
my audiopages

Yes, there are a lot of amps measured here, but not extensively, and also not related to the price. We have the SINAD per dollar ratio but is a bit useless to me and can lead to wrong conclusions (see Topping LA90).
As far as I'm concerned, and for what little I understand, I think nCore is a perfect combination of engineering and market.
Purifi 1ET400A is already meaningless in my opinion, at least for a private user (with a normal income) and probably gives no audible differences, also because objectively it doesn't seem much better as THD vs frequency (Bench AHB2 for example I consider it a significant step).
To the detriment of the nCore, however, there is product complexity and heat management, and consequently reliability and repairability. I sincerely hope mine will last 30 years at least, but today it seems a bit absurd to believe it...
The point of high efficiency and low heat is completely out of place. The efficiency, at the power levels normally used, does not differ much from the best class AB and linear power supplies, and heat due to loss are as far as 180 W full load (NC502MP), at least from what the numbers say, which for such a small device means it runs hot!
In fact, I built my nCores with heatsinks and fans, as well as thermal paste and new thermal pads, hoping they will last longer.
It is for all this that, as a man with a mediocre salary that I am, I wonder if there are better amplifiers in terms of cost, power, performance and reliability.
But unfortunately, there is not such an extensive comparison on products.
I with my analyzes, and despite what has just been said, I could not find better than the NCXXXMP modules... but I would like something equally powerful in the AB class.
Last edited: Jun 7, 2022
Win 11 -> Amazon Music HD -> Dirac Live -> MOTU Ultralite Mk5 -> Hypex NC252MP + NC502MP -> 2x NHT C3 + 2x DIY 12" Scan-Speak Subs (acoustic suspension design)
You must log in or register to reply here.