This is a review and detailed measurements of the NAD C268 power amplifier with balanced inputs. It is kindly sent to me by a member and costs US $900 at NAD dealers (not Amazon, etc.). The C268 is built on Hypex UcD Class D amplifier modules so in testing it we will get coverage on that as well. Then again NAD says it is a custom version for them.

The unit is nice and light to move around and inside has fair amount of space. Back panel is nice in the way it provides both balanced XLR and unbalanced RCA input together with gain control:

For my testing I used the fixed gain mode to get around any channel differential the potentiometers may introduce.

Speaker terminals are nice and easy to use and naturally the unit is properly certified for safety and emissions. Keep the later in mind as you compare it with any DIY version of the same amplifier modules. With anything with mains input, I highly recommend sticking with products with safety certifications.

In use, the amplifier runs completely cool to touch. Not even above room temperature it seems. It never, ever shut down no matter what I did to it. This is one of the reasons you buy a separate amplifier by the way. These power amplifiers are far more robust than any in any home theater AVR.

Stereo Amplifier Measurements
Here is our usual dashboard where we feed the amplifier a simple 1 kHz sine wave/tone and ask it to produce 5 watts into 4 ohm load (typical for many speakers). This is what we get: 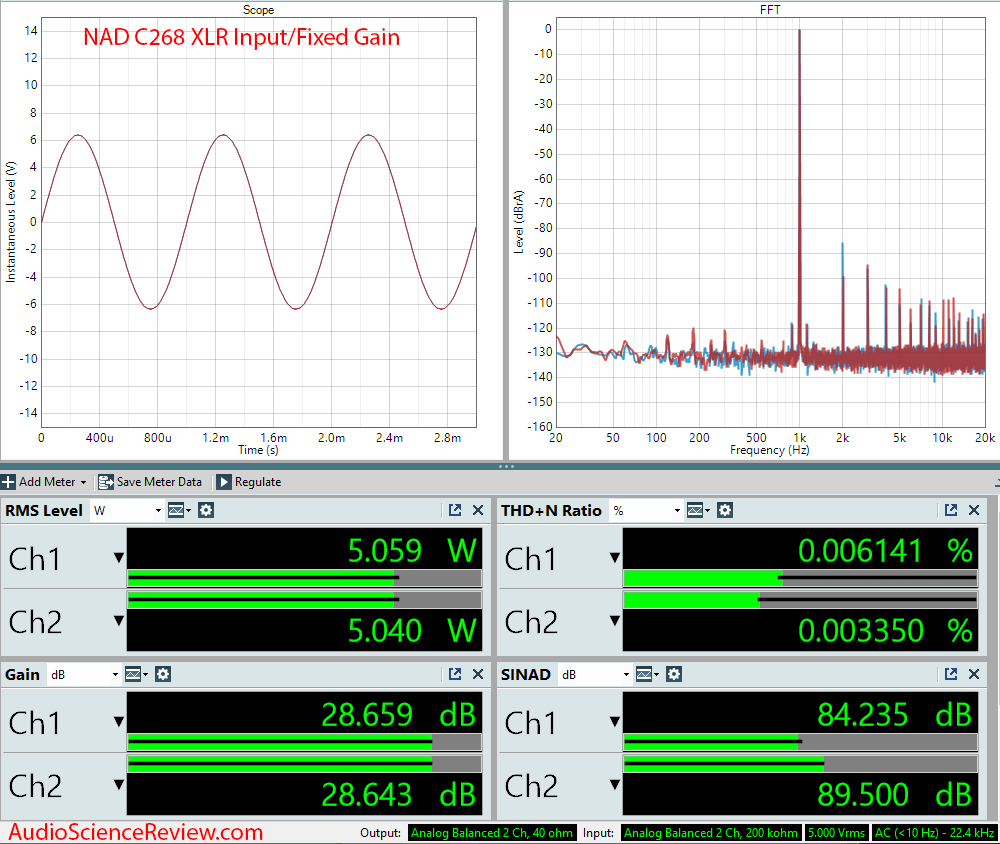 For some reason the channel in blue has much more second harmonic causing its SINAD -- which is a sum of distortion and noise -- to suffer by 5 dB. There is always some differential between stereo channels but this is a bit much. This aside, performance is above average with a SINAD of 87 dB once averaged (click on graph for larger size): 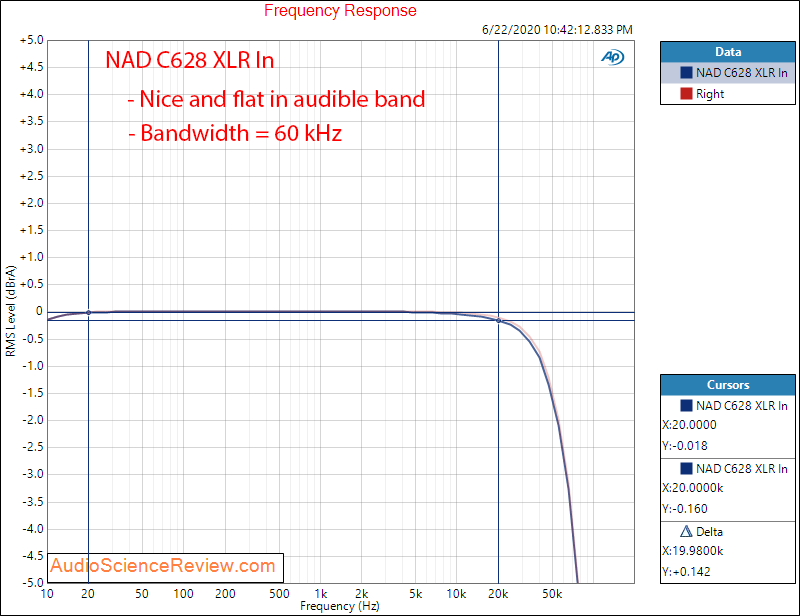 Crosstalk (one channel bleeding from one to the other) shape is unusual but fortunately it gives is near state-of-the-art performance where our hearing (more or less) is most sensitive: 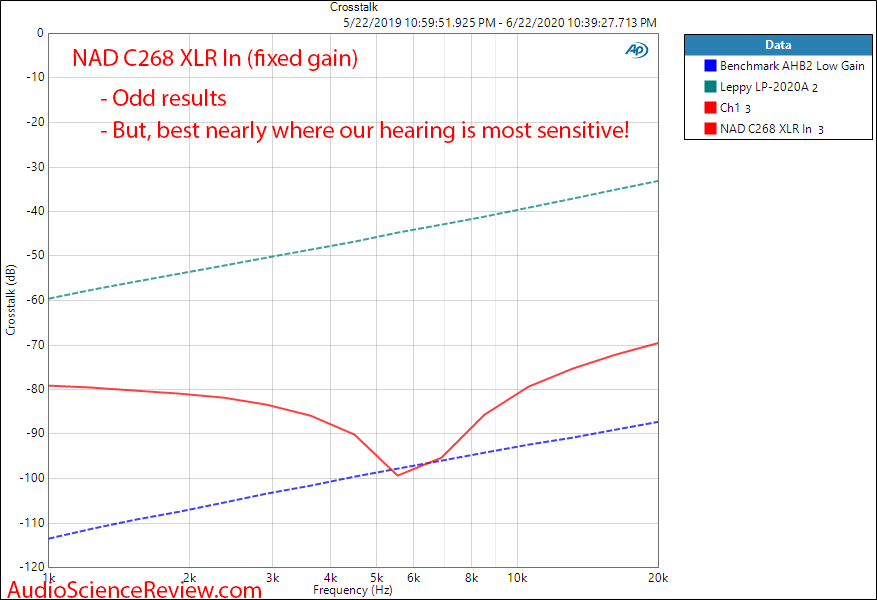 Noise performance is very good (much better than its distortion metric):

Getting fancy and using 32-tones to test for distortion/intermodulation we get what we already seen from the dashboard which is good: 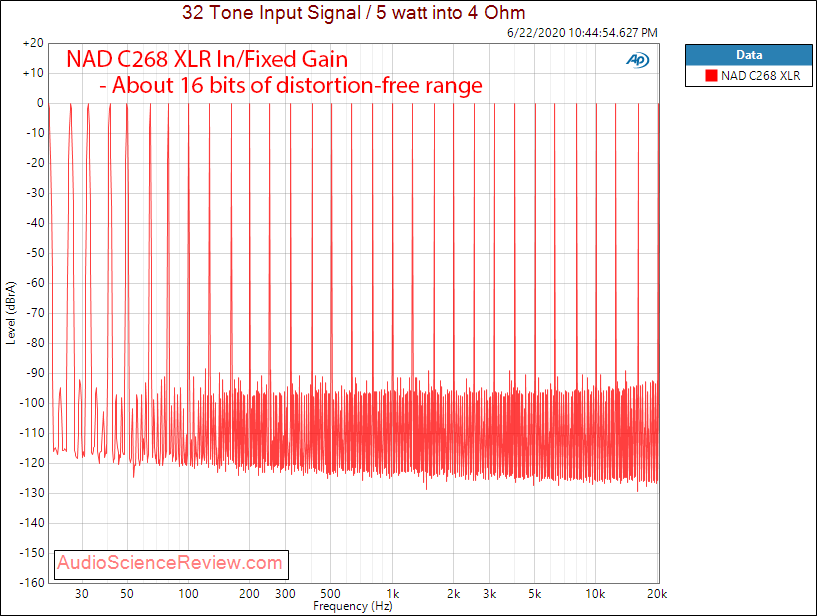 A power amplifier's job is well, to produce power so let's measure that starting with 4 ohm load: 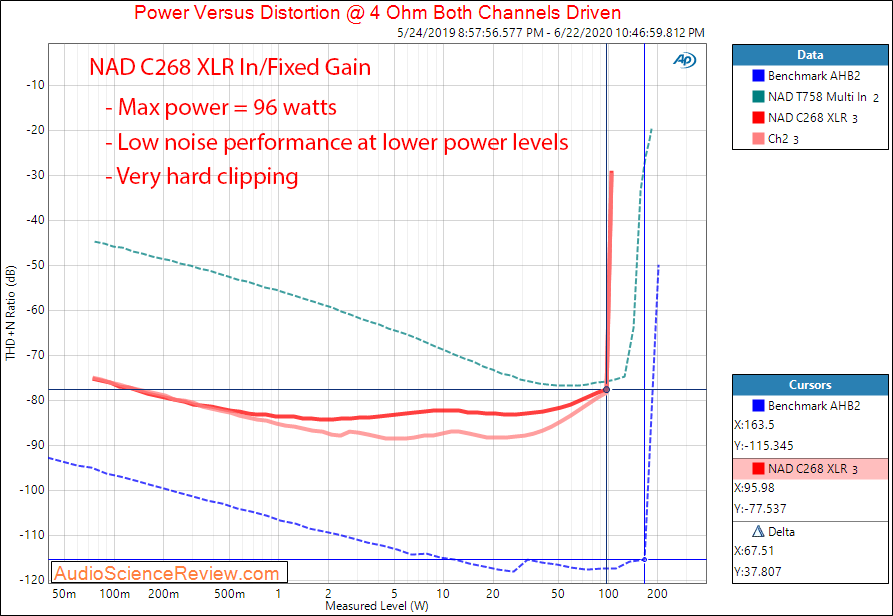 NAD rates the amplifier at 80 watts for both 4 and 8 ohm loads which is unusual. Fortunately we are beating that with our 4 ohm load, getting 96 watts.

As noted earlier, noise performance is very good as indicated by how low the red graphs are until distortion sets in and the graph starts to flatten and rise. But then we hit a very hard wall at the end. This is an amp that will sound good until it doesn't. You will instantly know its power limit for good or bad.

There is some hidden good news here though. Let's measure power at 1% distortion+noise both continuous (like above) and burst:

Wow, many switching amplifiers don't produce much more power in burst mode. Here, we are getting more than double the power to the tune of 230 watts while both channels driven! This means for momentary musical peaks, you have much more power available than our standard non-burst tests show.

Switching to 8 ohms we get what the company advertises: 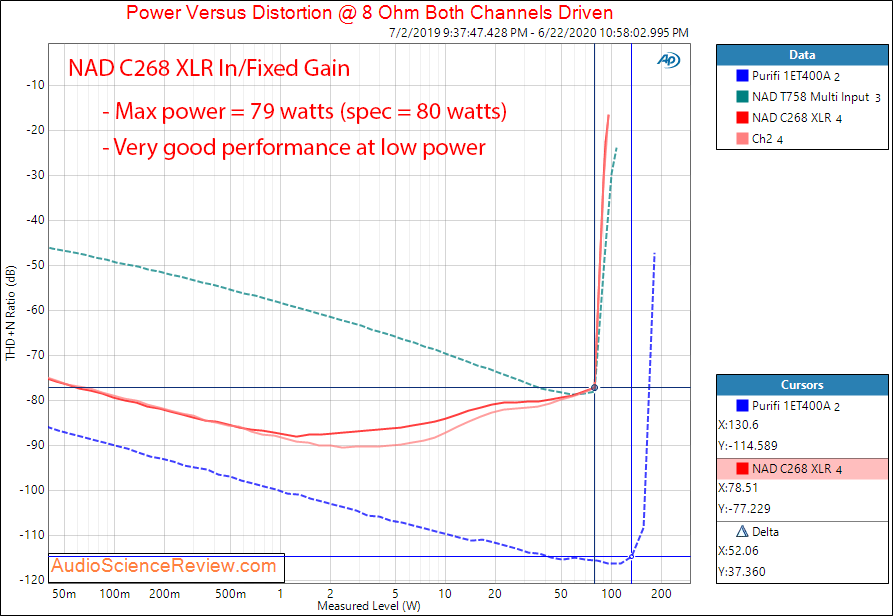 All of these power tests are at just one frequency: 1 kHz. Let's now run the same power sweep into 4 ohm load but vary the frequency: 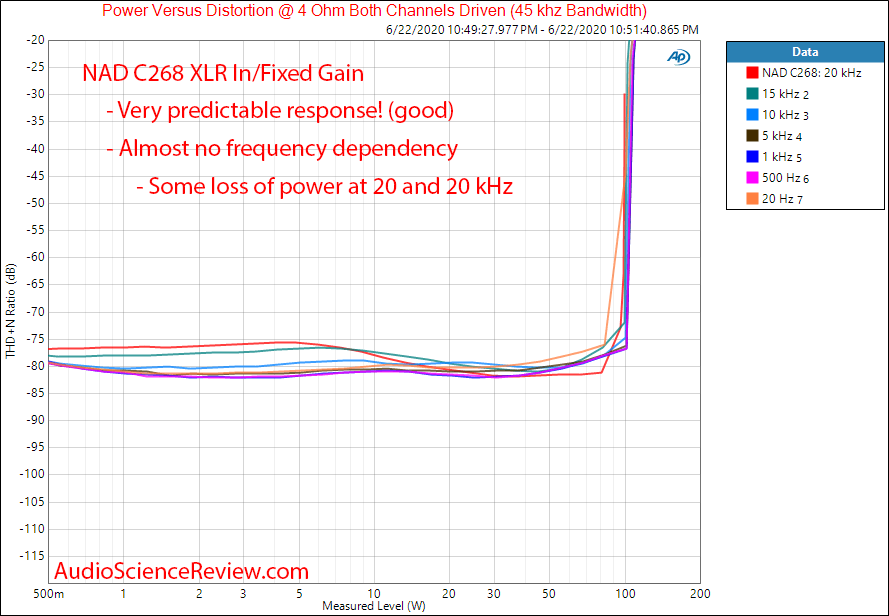 With class D amps, I expect these lines to have many different shapes and be all of the place. Instead, they land right on top of each other which is an ideal response. If you look to the right before clipping occurs though, you see that at the two ends of the spectrum -- 20 and 20,000 Hz -- power does get limited. 20 kHz doesn't need much power as music spectrum is quite low. But 20 Hz does and loss of power is unfortunate but very common. The peaks at low frequencies last a while due to their slow "speed" (rate of change) which taxes the power supply causing it to run out of juice at lower power levels.

Amplifier Bridged Mode Performance
I usually don't test bridged mode but knowing you rascals, you will immediately ask for it since NAD emphasizes this a lot. So let's reconfigure the amp into a single channel and see what we get: 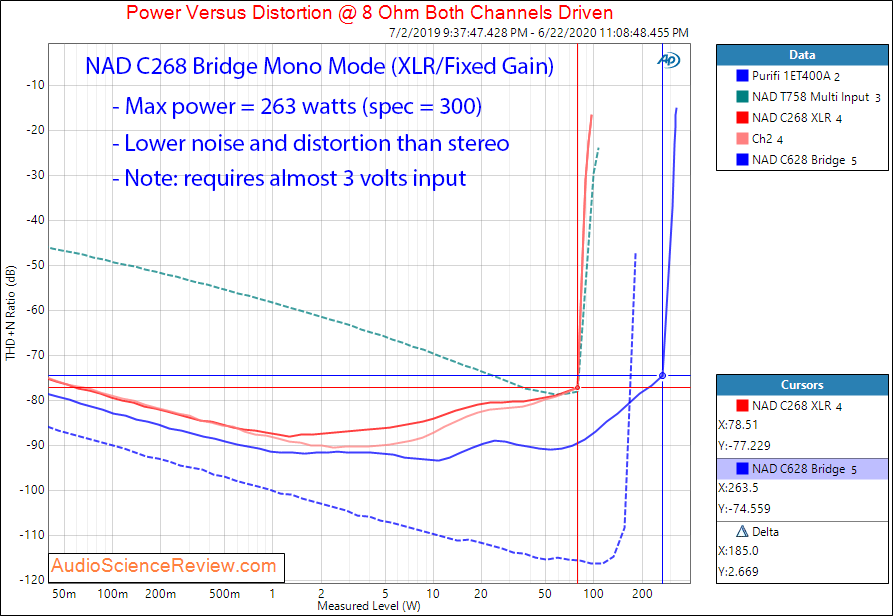 Company advertises 300 watts but that is likely at higher distortion than what I use in the above graph. To approximate their performance, let's use the 1% THD+N threshold again and measure again:

Now we get the 300 watts continuous. And better yet, we get close to half a kilowatt of power for peaks! Nicely done.

Conclusions
The value proposition of the NAD C268 amplifier doesn't look very good at first blush. Just 80 watts per channel for $900? Testing shows while that is more or less the continuous power level, for short duration the amplifier can provide far more power. Combined with the nice and safe build quality, the C268 won my heart.

As such, I am going to put the NAD C268 on my recommended list.

I keep asking for money from you all to get rid of depression that sets in me when I don't receive cash all the time. I figured you are all annoyed by that so thinking that I would put the negative energy into writing music! Would be a great outlet for me to get these bad thoughts out of me. Problem is, I don't know the first thing about writing music so need to take some lessons. And lessons cost money. So please donate what you can using: https://www.audiosciencereview.com/forum/index.php?threads/how-to-support-audio-science-review.8150/
Last edited: Jun 23, 2020
Amir
Founder, Audio Science Review
Founder, Madrona Digital
Contributing Editor, Widescreen Review Magazine
Click for My Technical Background
My YouTube Channel

What's nice is we in the states do not have to order it from Europe or have to worry about long distance servicing. Thank you for another great review.
I've got soul, but I'm not a soldier...

I appreciate this review. I like knowing that at a specific price point a major manufacturer puts out not just a credible product but a product that offers value.....and you identify the constituents of that value. A product like this gives me an orientation point for making sense of a sea of product offerings and marketing claims. Again, thank you. This is positive news.

For $600, you can go the monoblock route with a pair of Emotiva PA-1’s, Would like to see it measured.
Loudspeaker Data & Preference Ratings

Do you guys know of anything better for the price with low noise, XLR in and gain control ?

Disappointed at the noise level—I thought a Hypex design would be lower than that -130dBrA baseline—and at the harmonics, which shoot past -110dBrA and creep into audible range— but the rest of the measurements are pretty good.
OP

Billy Budapest said:
Disappointed at the noise level—I thought a Hypex design would be lower than that -130dBrA baseline—and at the harmonics, which shoot past -110dBrA and creep into audible range— but the rest of the measurements are pretty good.
Click to expand...

amirm said:
Those are Ncore modules, not UcD that is used here.
Click to expand...

Glad to see some decent results from NAD. I was beginning to lose faith in them. That made me sad since my first preamp was a 1020 about 37 years ago that, along with my Hafler DH220, AR Turntable, Shure V15 Type V MR and Nakamichi BX-2, took my love for music and equipment to a new level. Cheers to them!
A

Iam guessing this is the UcD180 module?
If so, I believe a complete amp can be put together for much cheaper, although the NAD is an elegant brand.

Would you notice a difference between this and a Purifi amp with a set of Revel stand mounts?

Thanks for the revirw Amir.

NAD went all in providing the extra power switch at the rear, line out pass-through, input level control, a ground lug and XLRs. Looks like a nice amplifier.
OP

AudioJester said:
Would you notice a difference between this and a Purifi amp with a set of Revel stand mounts?
Click to expand...

If you can get a Purifi, that is what I would get.
Amir
Founder, Audio Science Review
Founder, Madrona Digital
Contributing Editor, Widescreen Review Magazine
Click for My Technical Background
My YouTube Channel
I

The Yamaha R-N803; with it you also get preamp functionality, a streamer, and internet radio. It is slightly cheaper, and rates higher on the SINAD graph. I have it and I am happy with it.

Also the Yamaha WXA-50 seems better (see same chart) but doesn't have the same power. I do not have any experience with this one.

You engage the rarely used and massively un-PC "bust" mode at one point, you saucy devil.
Too many DACs> Too many amps> Too many headphones

The same amplifier should be in C368 integrated?
OP

Jimbob54 said:
You engage the rarely used and massively un-PC "bust" mode at one point, you saucy devil.
Click to expand...