A recent discussion in the review of Schiit Modi 2 reminded me that I was planning to do a hardware teardown of it. As reminder, the Schiit Modi 2 is a low cost ($120 shipped) USB DAC. 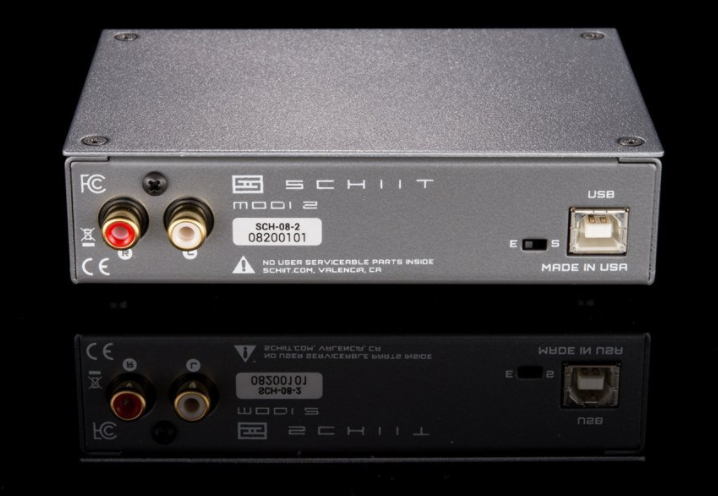 Audio is captured through the USB port and output on those pair of RCA jacks. The only thing unusual is that "E/S" switch that puts the DAC either in 24/96 mode or supports higher resolution to 192 KHz (different USB classes). It is an ill-intended feature especially since Windows 10 Creator Edition no longer requires drivers for either mode.

Mechanical
The unit is simply designed but uses a very hefty gauge of formed sheet metal which gives the unit nice weight to sit on the desk unlike many budget dacs, Screws are threaded which is nice and easily open and expose what is inside. The silver color is utilitarian and is not going to impress any friends that come over. So it is more functional than anything else.

Electrical
Sitting on nice stand-offs, the PCB has a nice red "solder mask" rather than the more common green. I like that but some other engineers do not.

All the components are on top side of the PCB, reducing cost: 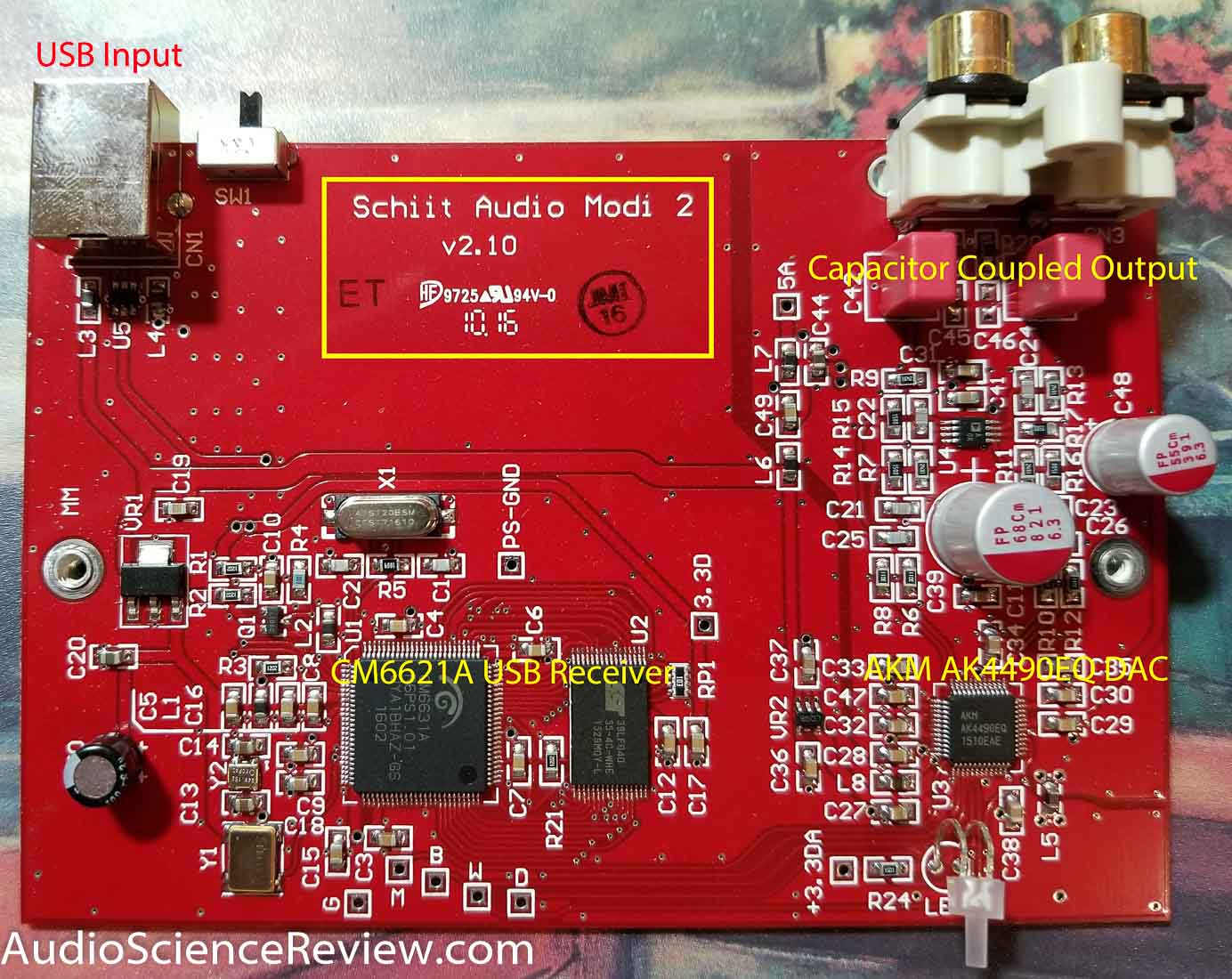 Architecturally USB DACs are pretty simple. There is a USB interface which in this case is from C-MEDIA, the rather popular CM6621A. This is the heart of the digital logic, interfacing with the computer and extracting the PCM data stream to feed to the actual DAC chip. Speaking of that, this is the AKM AK4490EQ In reasonable quantity it costs about $3. You can see its specs here: http://www.akm.com/akm/en/file/datasheet/AK4490EQ.pdf. It is quite a popular chip and with rich feature set. Unfortunately AKM does not publish any performance measurements so hard to say how good they say it is relative to the actual implmenetation such as in Schiit Modi 2.

Overall soldering quality on this side is good with no mods or hand modifications sans this one solder joint on this inductor: 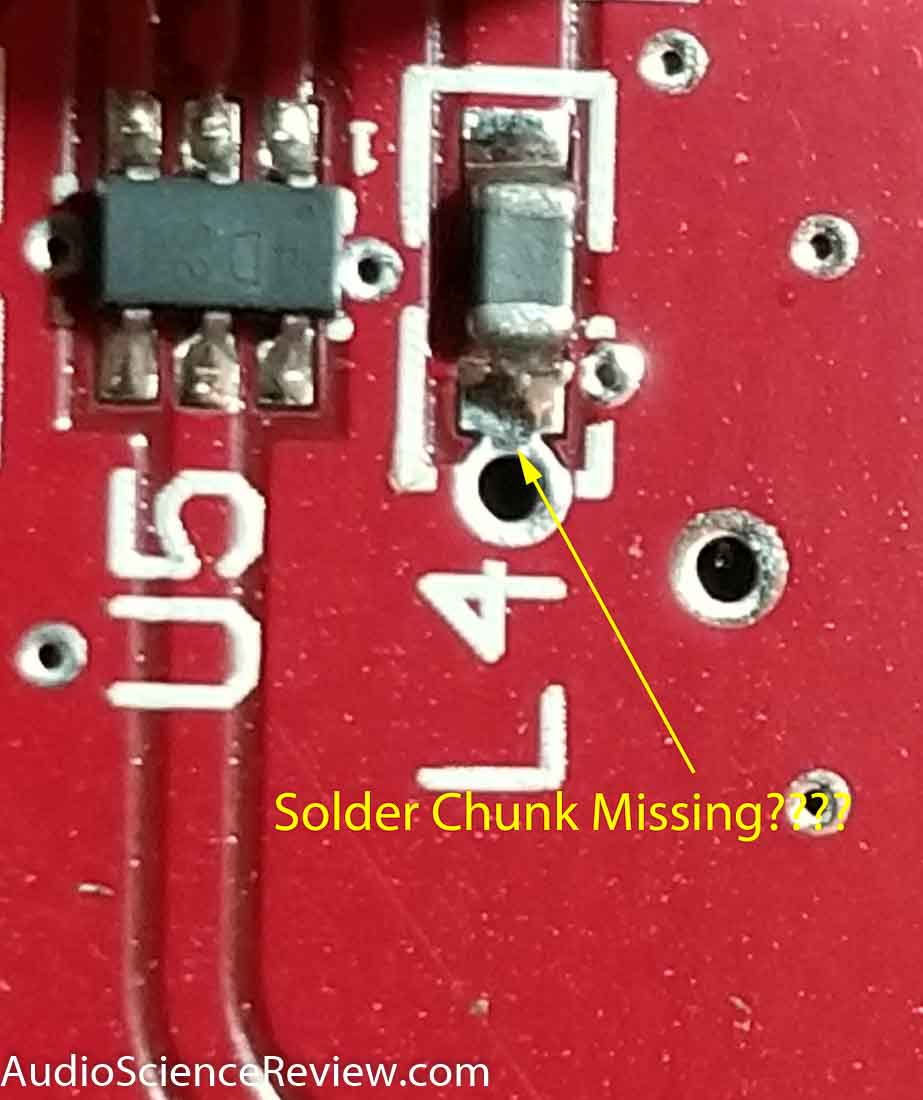 It is weird. It is like a part of solder joint has been chipped off. All of these surface mount devices by the way are automatically placed by "pick and place" machine and hot air soldered. Because of the high automation, it allows manufacturing in US for little to any premium over getting it done in say, China.

Back to the architecture, one of the things that must be done is to keep the digital circuits well away from the sensitive analog output of the DAC and this is nicely done with both good layout and nice gap between the two ground planes: 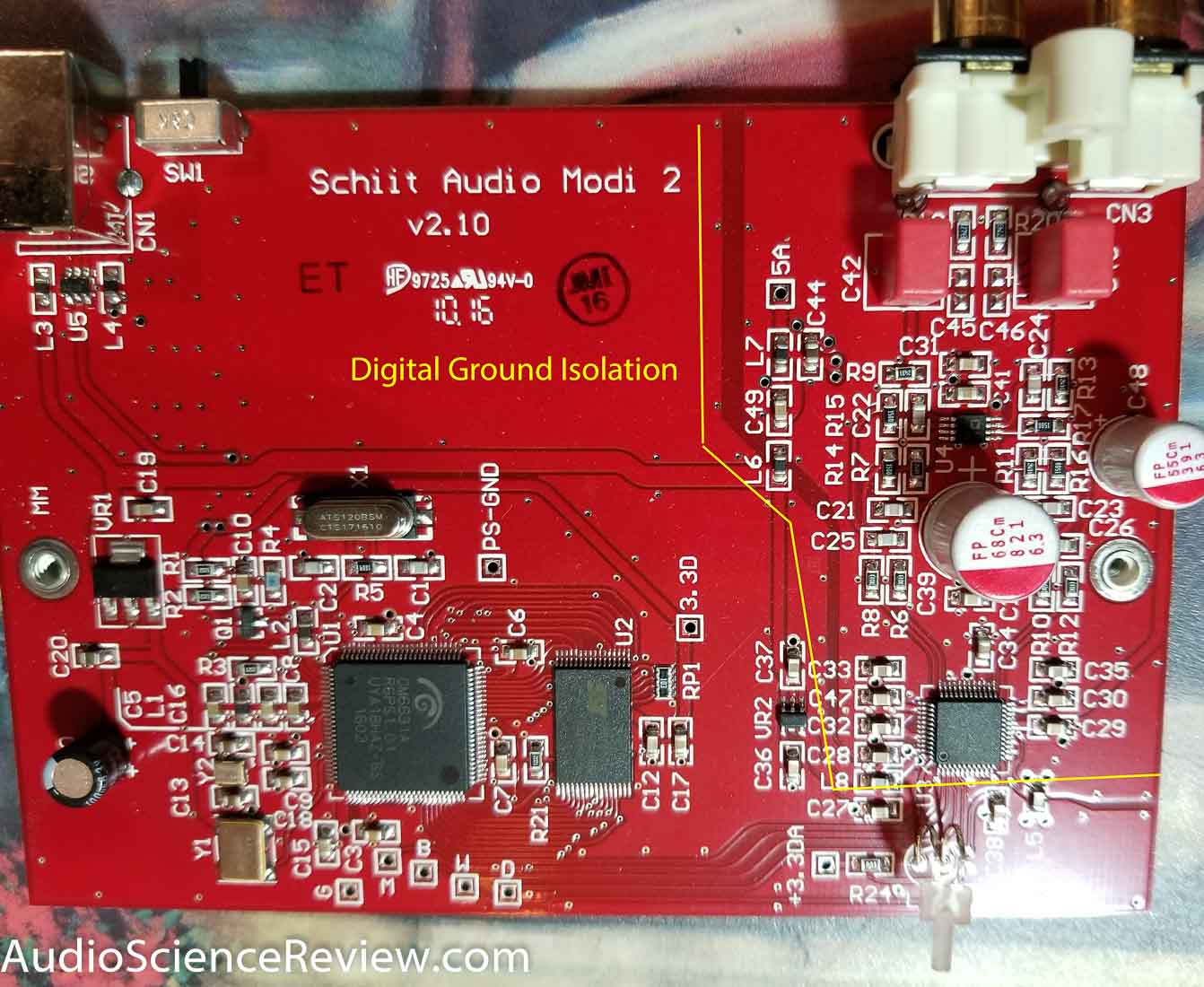 Unfortunately my measurements show that such isolation does not exist in reality but at least whoever did the PCB layout, worked to do his part.

Quality of a few parts that I can identify is very good such as Nichicon and WEMA capacitors: 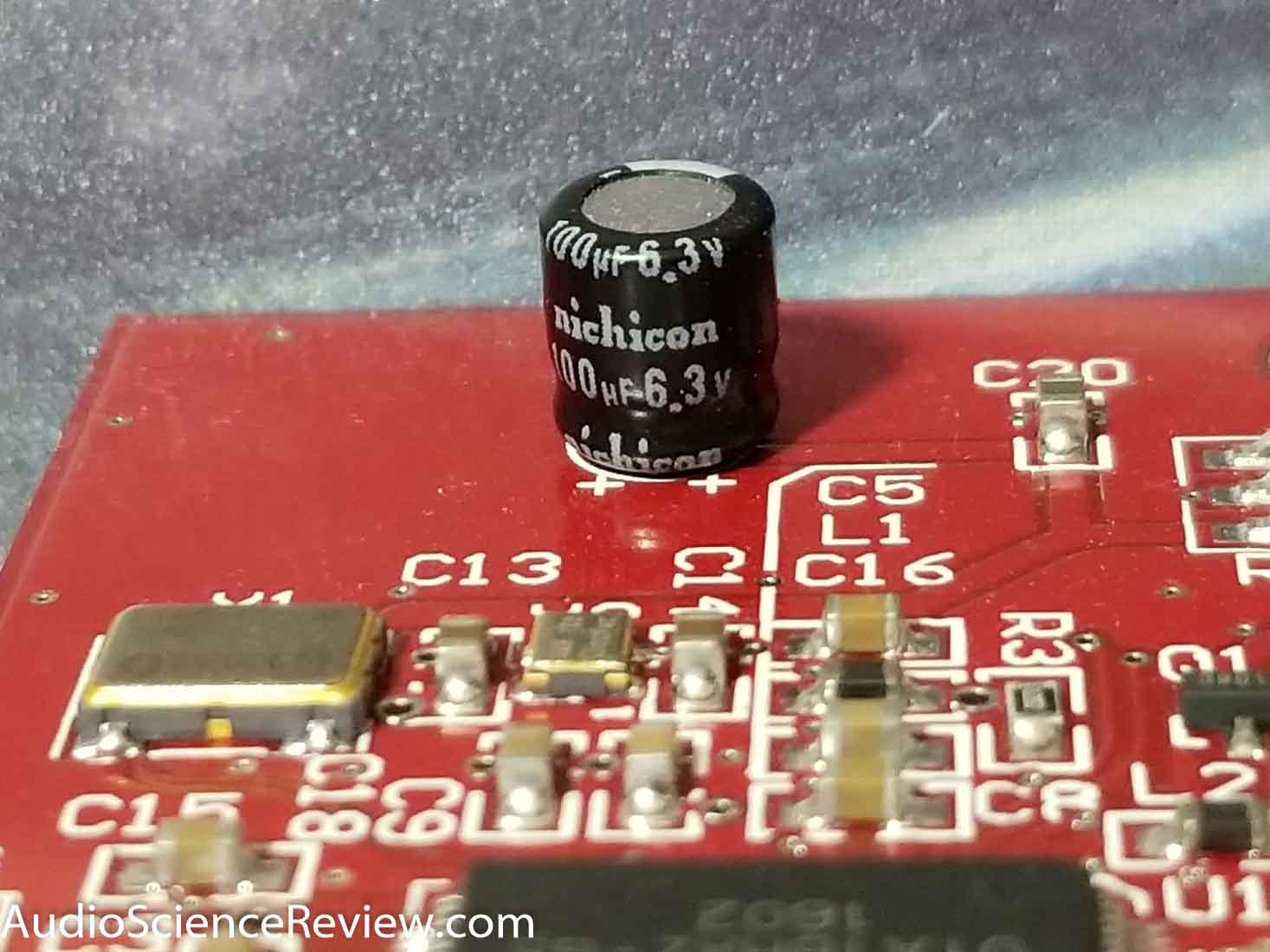 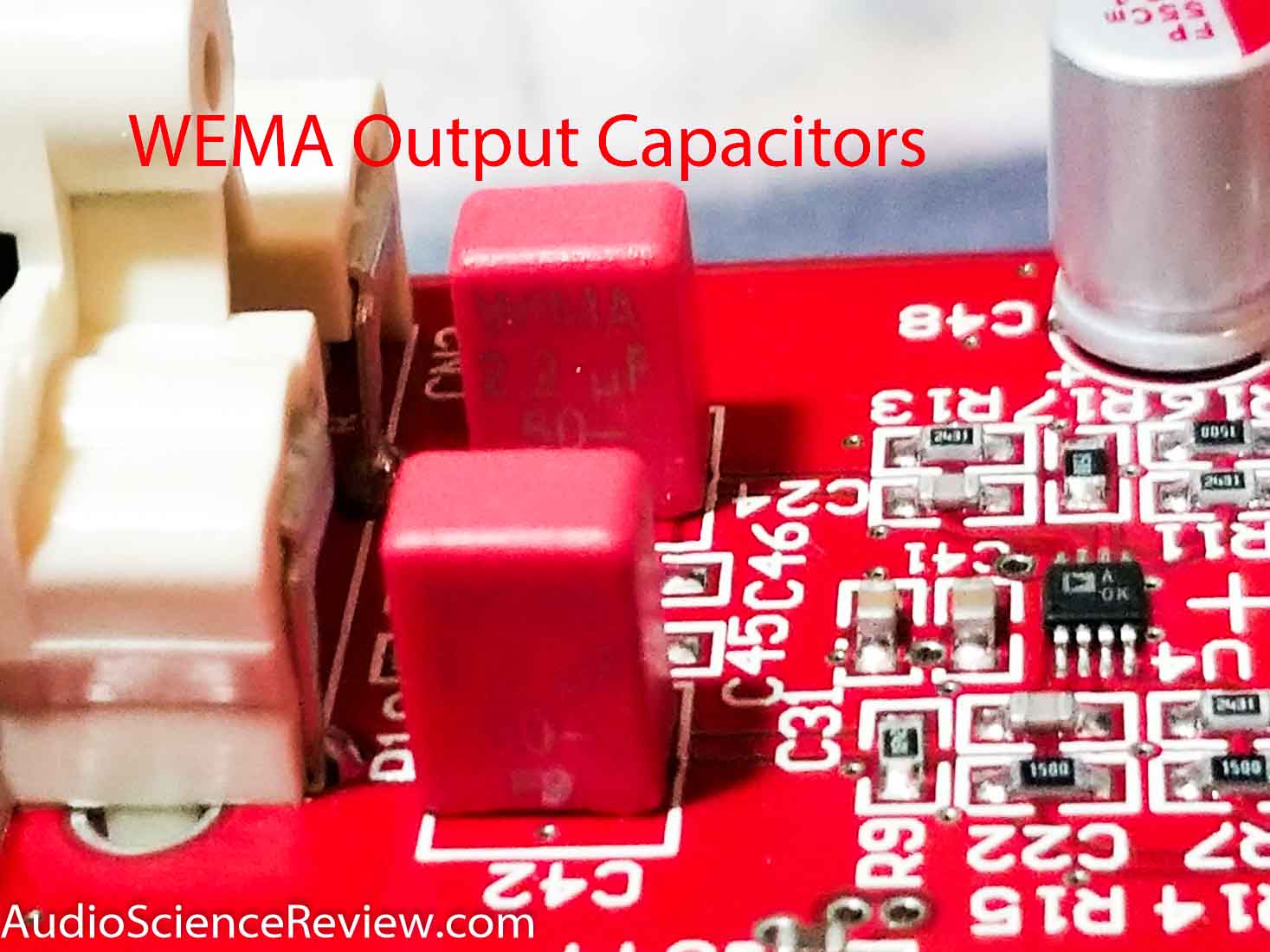 That said, I am bummed to see capacitors on the output of the DAC. Capacitors make it easier to design the output amplifier as it does not have to rest at zero volts. Instead you can have single supply amplifiers which have a few volts as their zero reference. Since we can't output that DC to external devices, a capacitor is used which blocks that DC. Unfortunately it also blocks a bit more than DC, usually causing low frequency roll off. I will test for this soon and see what impact it has. Look at Schiit web site, they sell a more expensive "UBER" version that is DC coupled.

The output buffer/amplifier is performed through an analog devices OPAMP ("U4"): 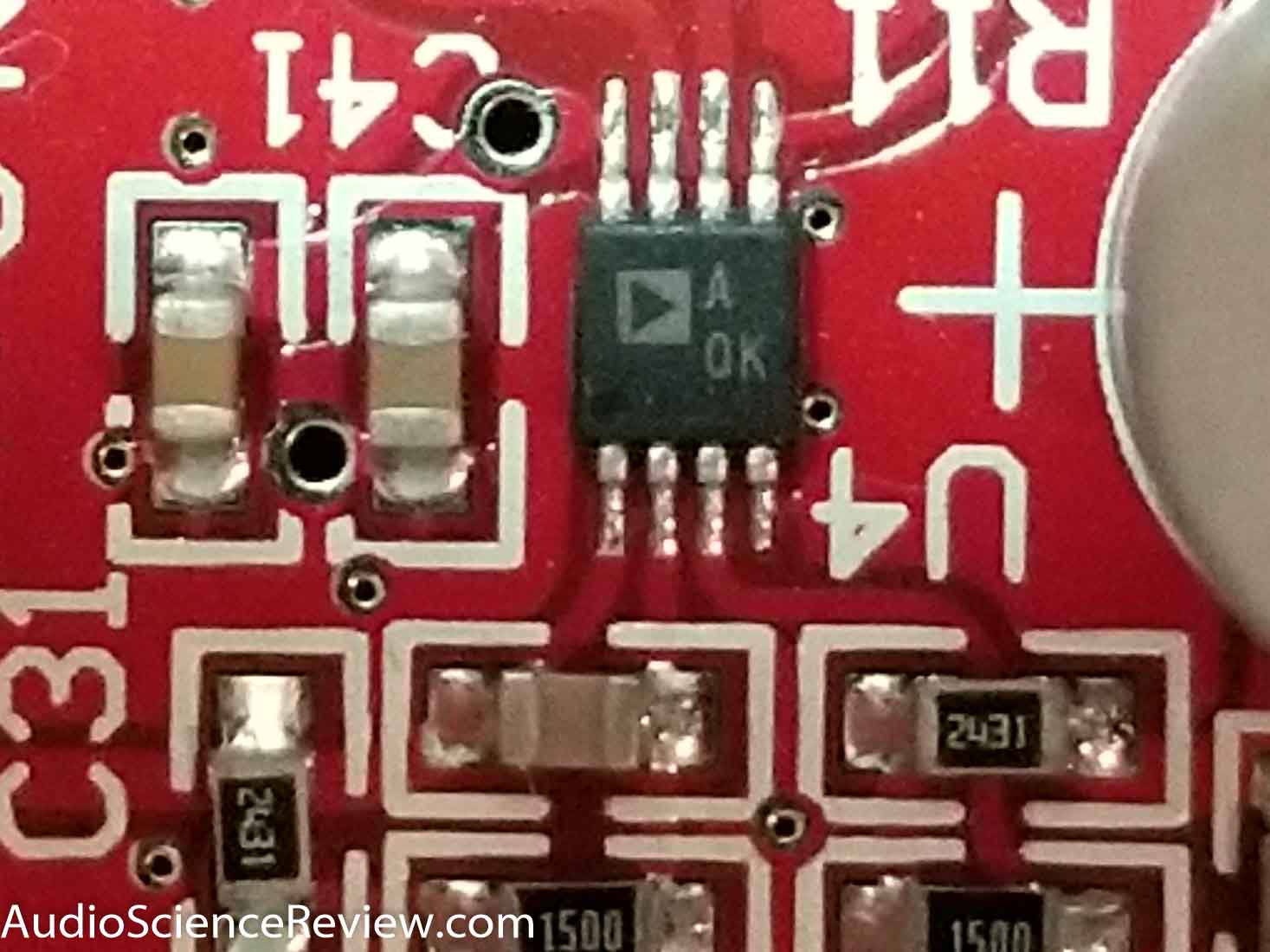 As you see, there is no part number on it so I don't know which they use.

Now let's look at the back side of the PC board: 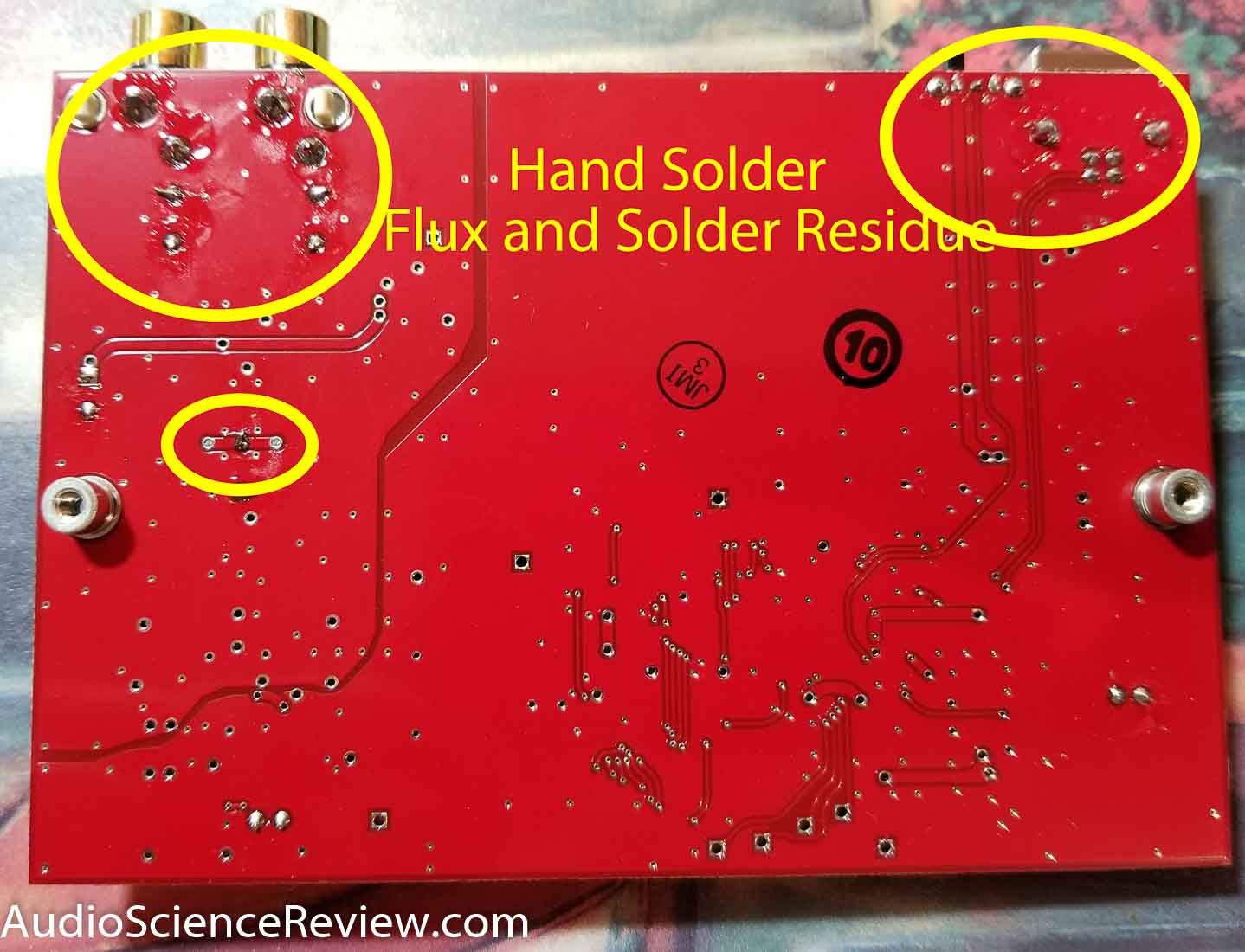 As I noted there are no components on the back. What is going on there is that we have a few "through hole" parts that are not surface mounted such as RCA jacks and connectors. Since there are a few of these, they are hand soldered which is fine if it is well done. Alas, that is not the case here. We first see residue solder paste that should have been cleaned and is not. Depending on the kind of flux this is, it may be more or less issue. Regardless, I like to see it cleaned. The wrong kind can be corrosive, create additional capacitance between the pins, etc.

More concerning the soldering itself: 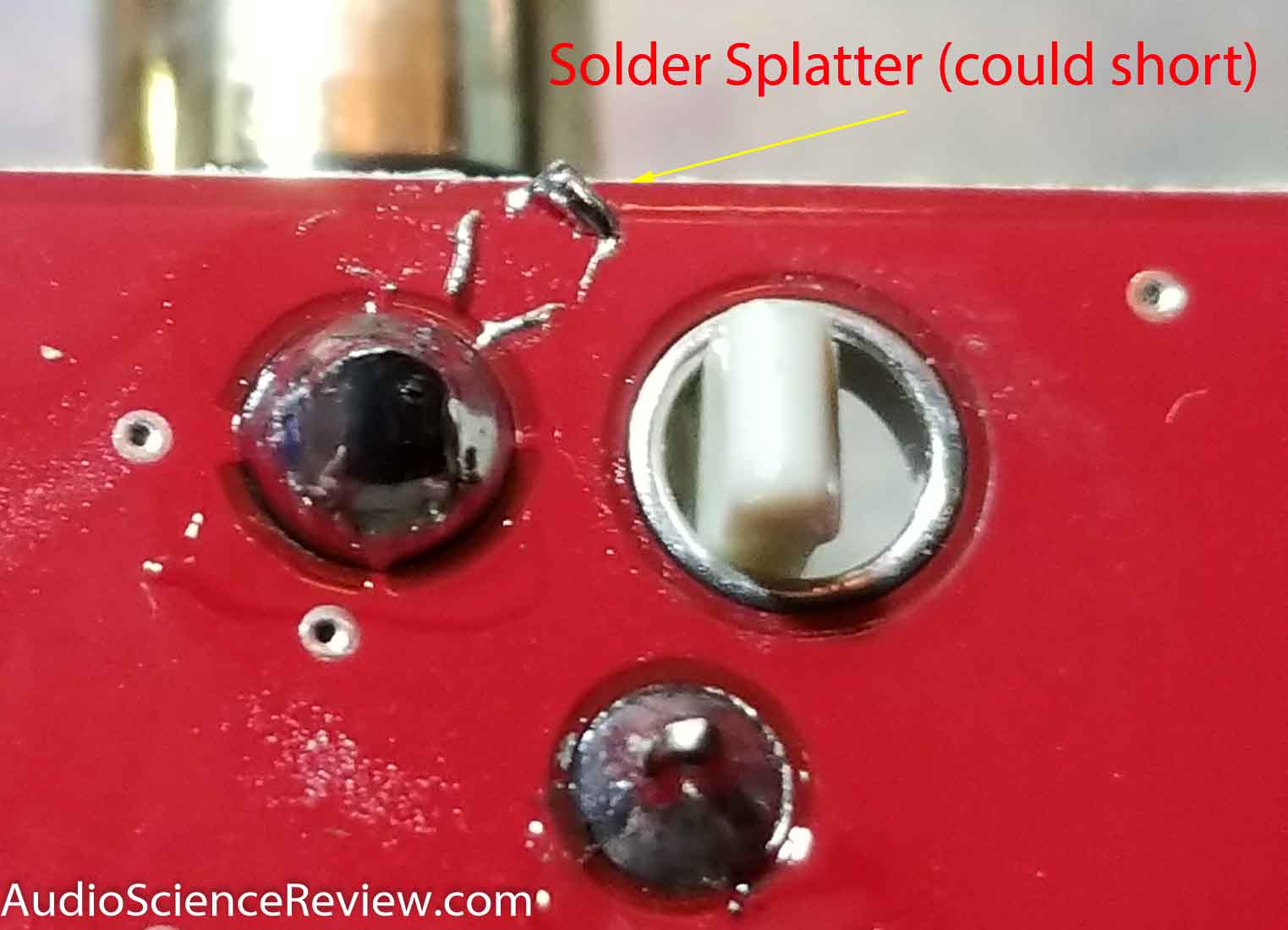 I mean really... This is really, really poor soldering. Some of the solder has spattered and could have easily caused the short. It can also come loose and short out something else in the future. The solder mask provides some isolation to keep this from happening where it exists, but anywhere else it could easily cause a short or intermittent failures.


Similar problem exists at all the hand solder joints: 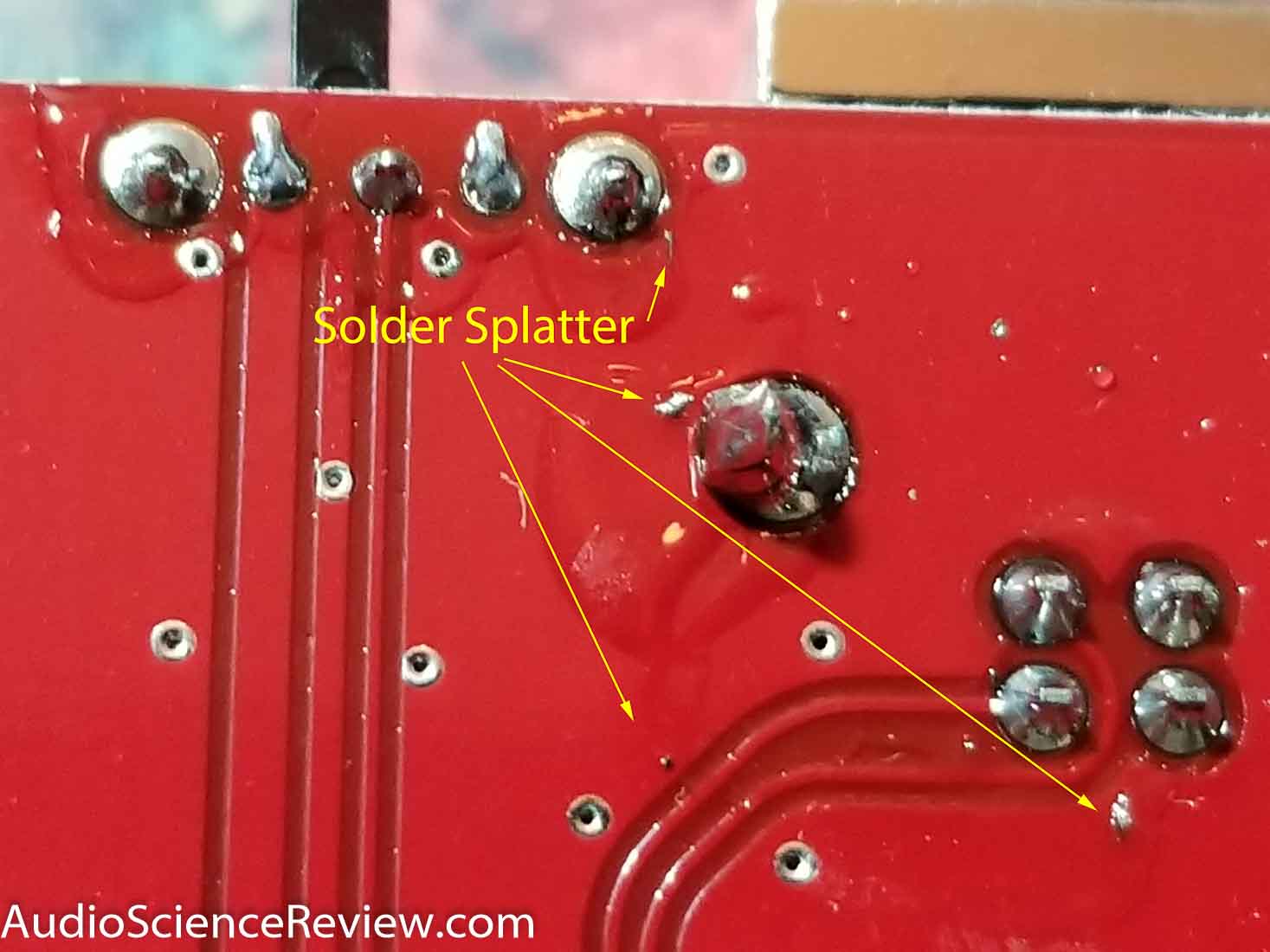 ​
This kind of thing should not happen, period. There is failure here both at the level of work done and final quality control. It just doesn't take much time to avoid these kinds of issues.

Summary
The Schiit Modi 2 gets good marks for the mechanical design (for a budget DAC). The assembly of the surface mount parts (SMD) look good so no complaints there. Disappointing is use of capacitor coupled output and subpar manual soldering. The latter is so bad as to get a failing report in my book. I have their Magni 3 headphone amplifier and will look there to see if there is similar approach there.

Since some people are interested in this data, the Schiit Modi 2 draws about 150 milliamps of current from USB bus. At the nominal voltage of 5.08 volts out of my laptop, my USB power meter is reporting 762 milliwatts of power consumption. As a way of comparison, a JDS Labs ODAC uses just 40 milliamps and 203 milliwatts of power.
Last edited: Nov 21, 2017
Amir
Founder, Audio Science Review
Founder, Madrona Digital
Contributing Editor, Widescreen Review Magazine
Click for My Technical Background
My YouTube Channel

amirm said:
Since some people are interested in this data, the Schiit Modi 2 draws about 150 milliamps of current from USB bus. At the nominal voltage of 5.08 volts out of my laptop, my USB power meter is reporting 762 milliwatts of power consumption. As a way of comparison, a JDS Labs ODAC uses just 40 milliamps and 203 milliwatts of power.
Click to expand...

What do you think account for the big difference in power consumption?
OP

I had a Modi Multibit which honestly sounded horrible with very high distortion compared to my D30, M8 or my HTC 10.
M

Sorry for the thread bump...

A friend was complaining of of a channel cutting in and out on his Modi Multibit so have gave it to me to see if there was maybe a loose RCA jack. I cracked it open and was horrified at the terrible quality. The amount of solder balls, spatter and spikes was alarming. Also the flux residue was crystallizing AKA dendritic growth which can absolutely cause shorts. Here are a few choice pictures... The dendrites are the whitish material around the solder joints. 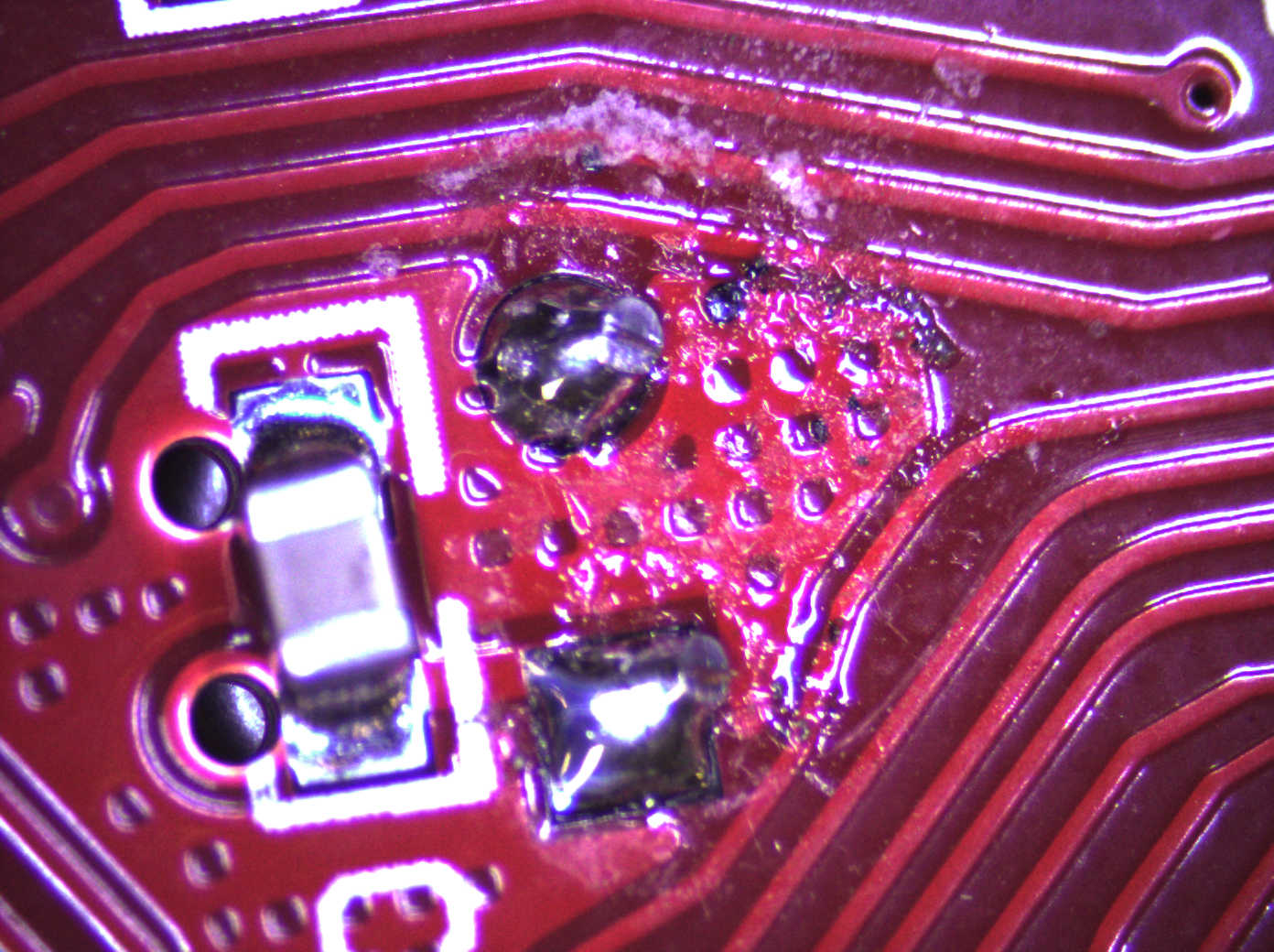 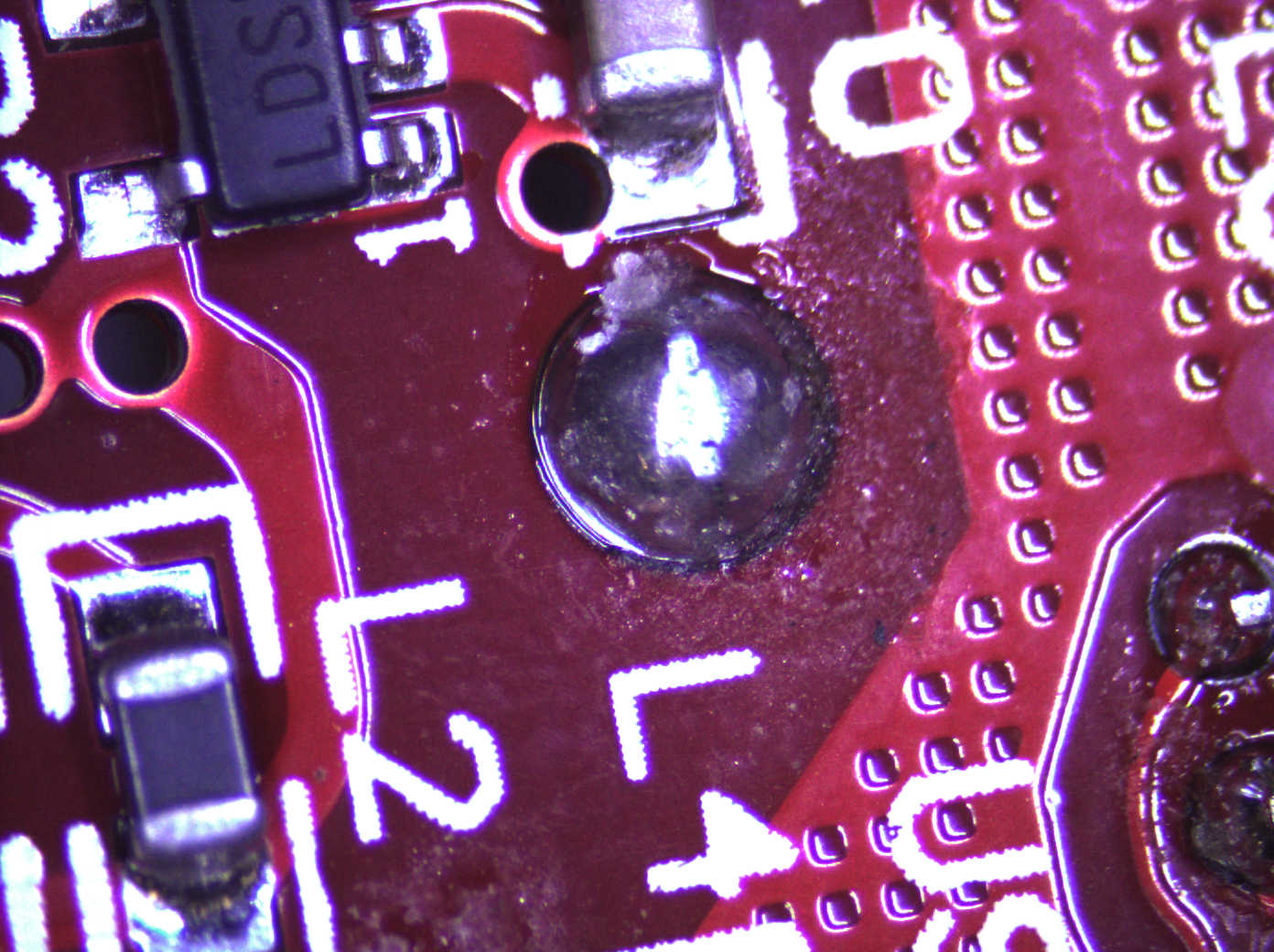 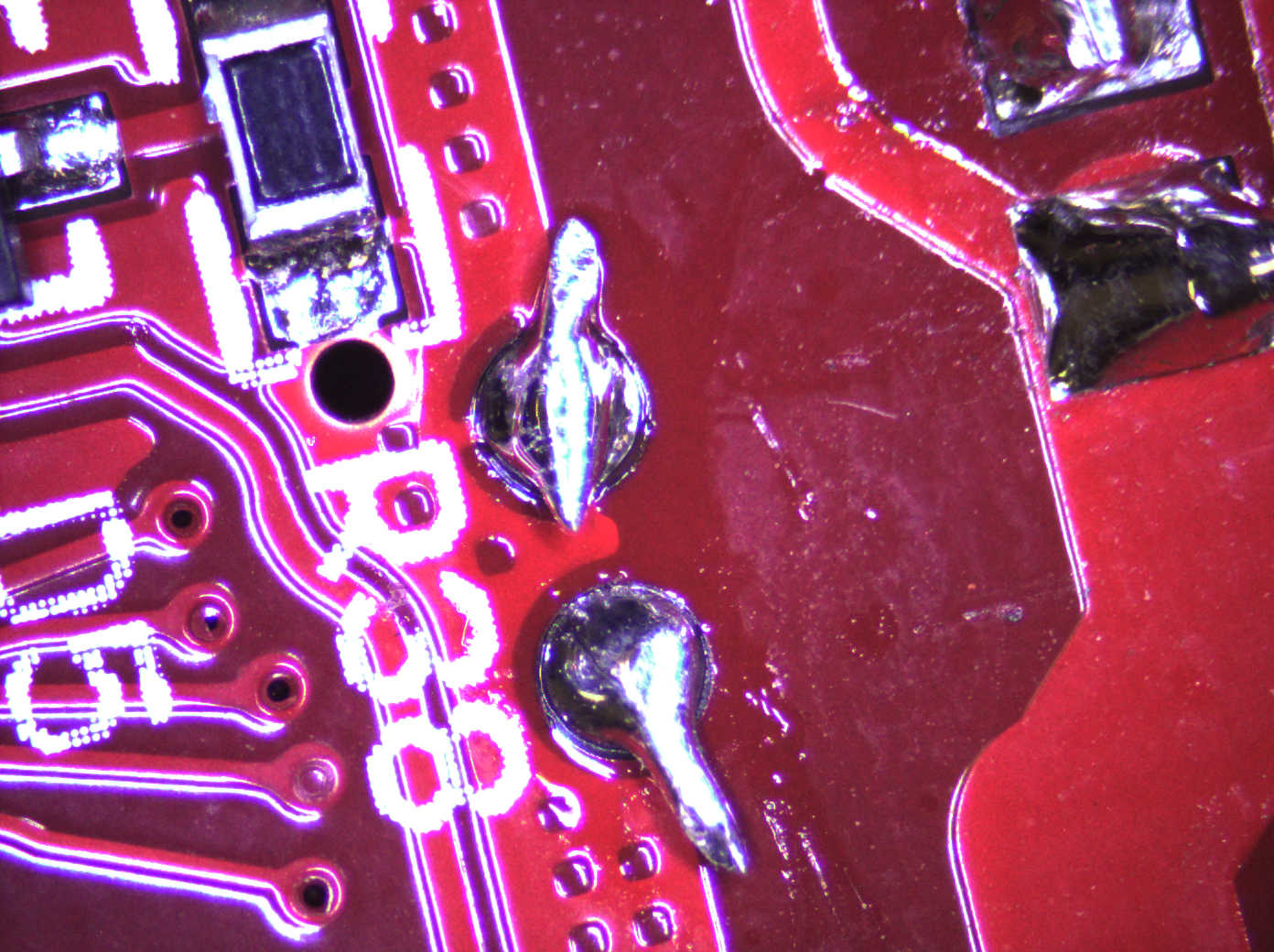 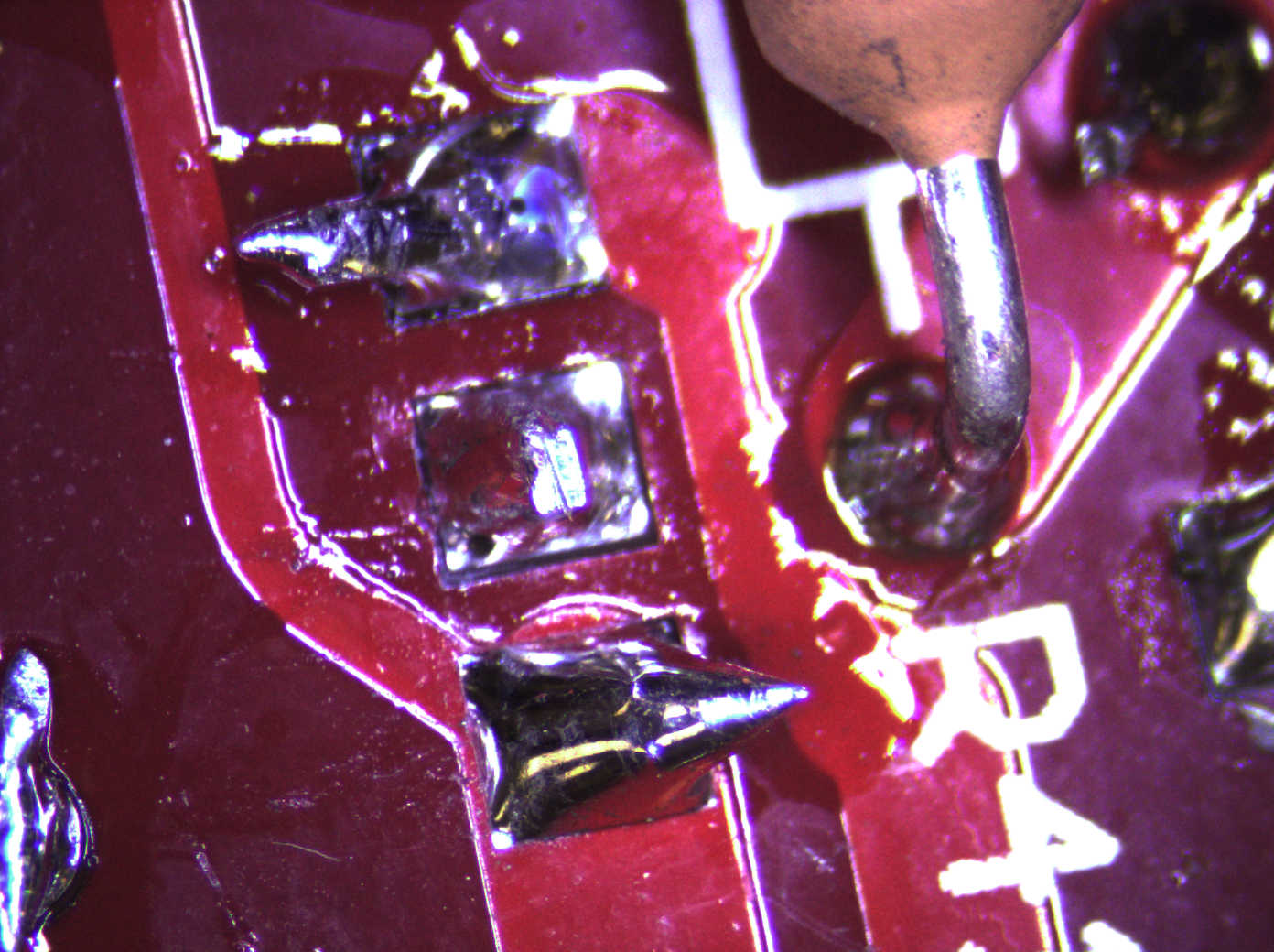 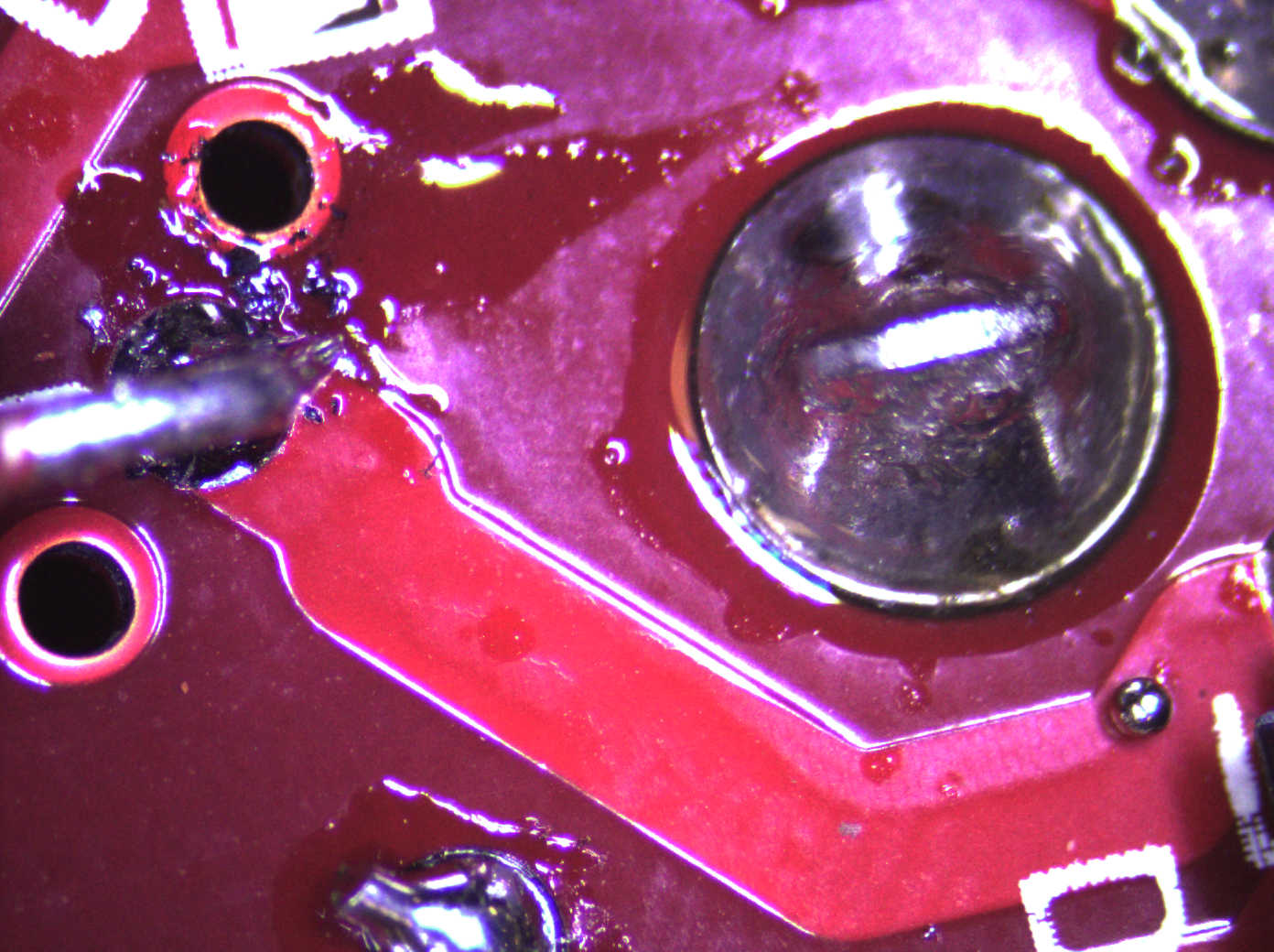 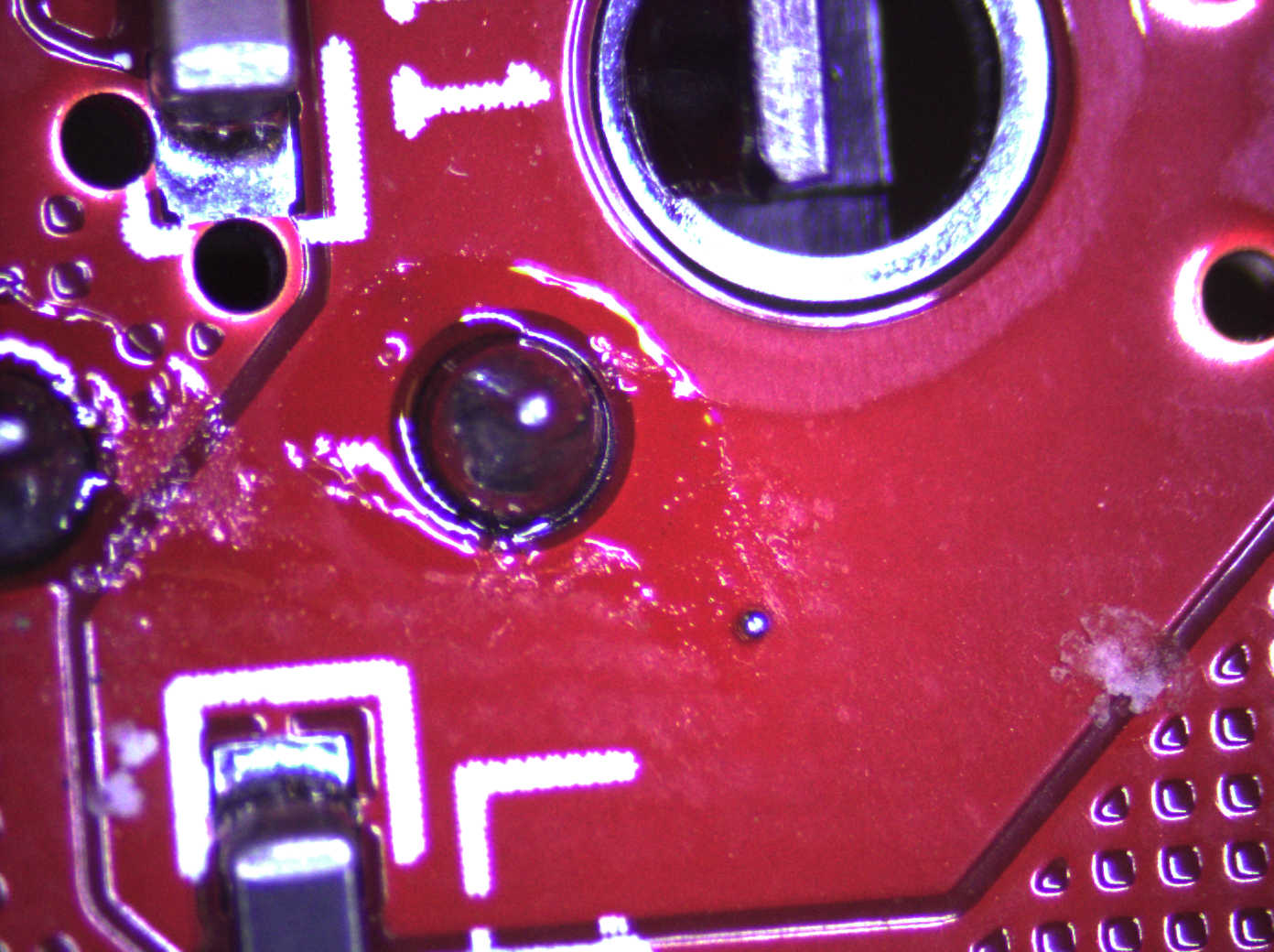 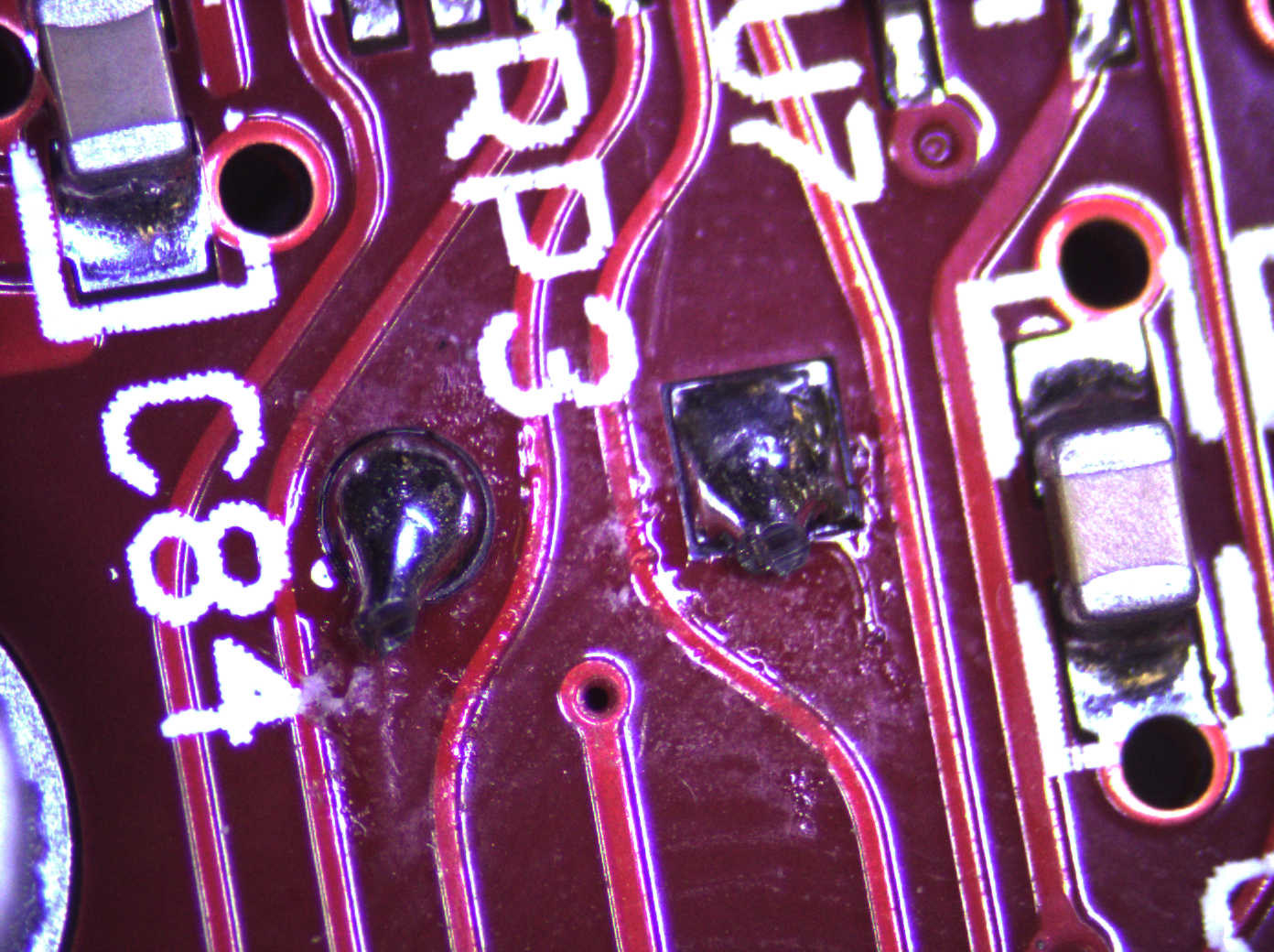 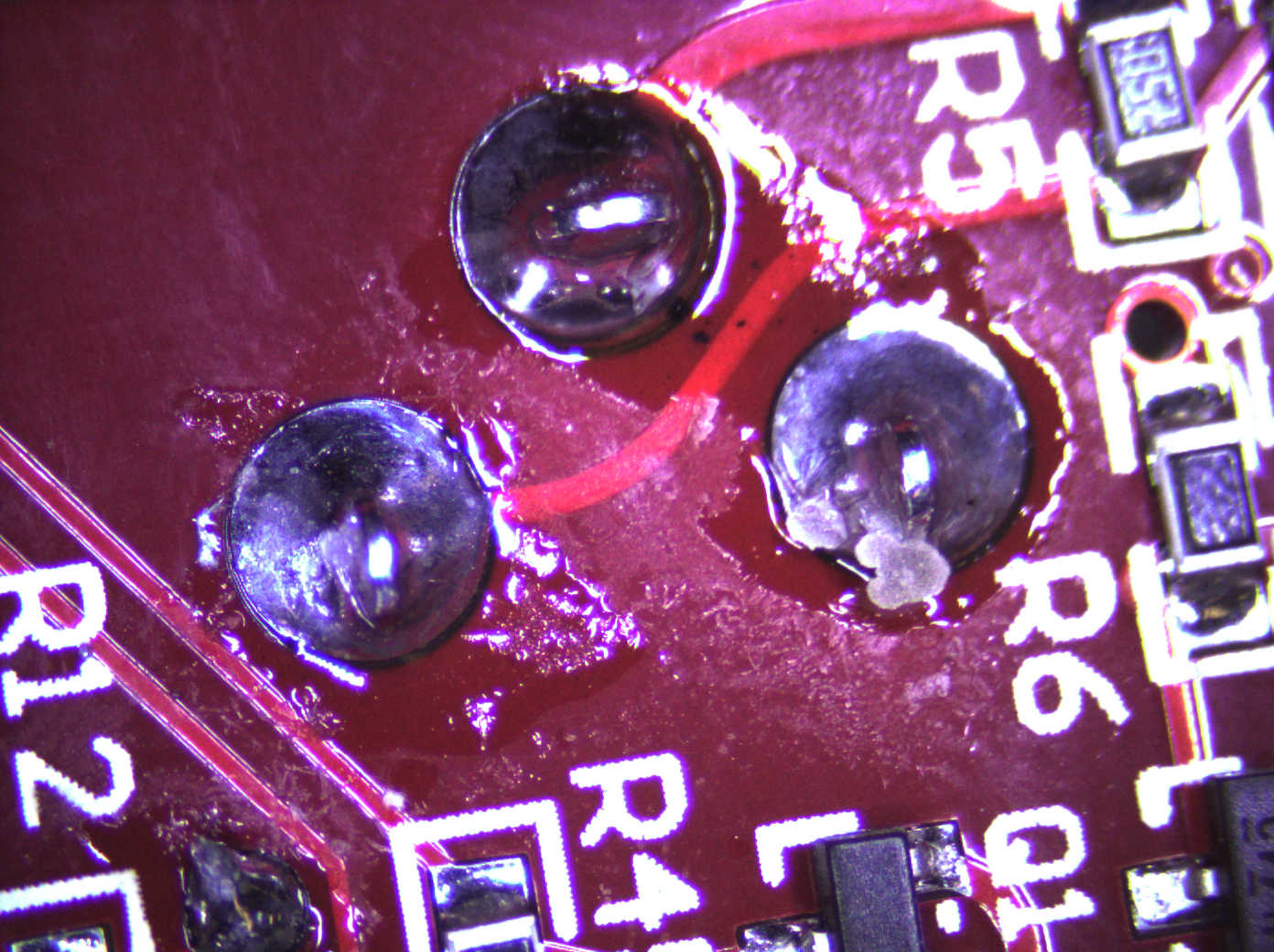 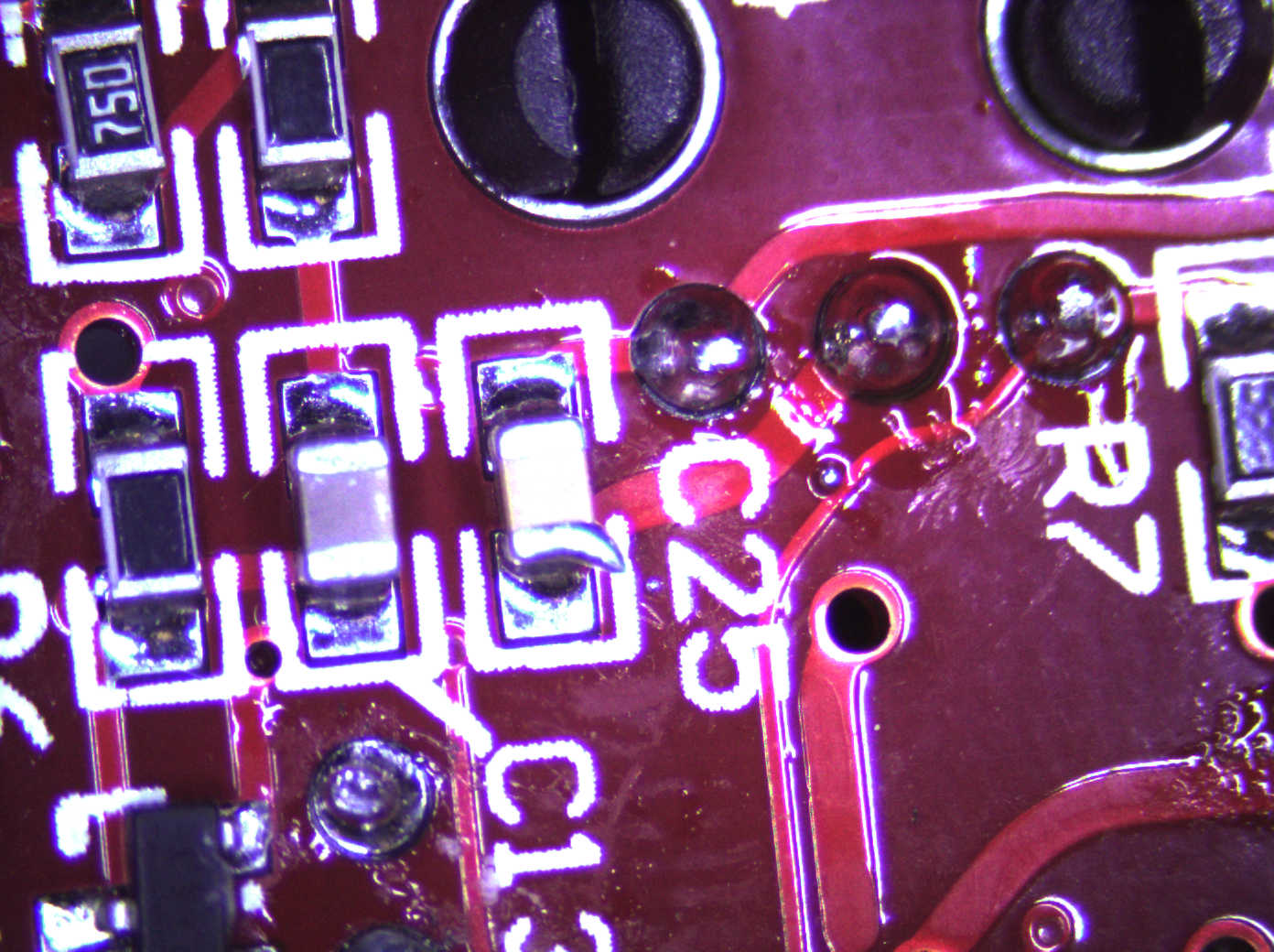 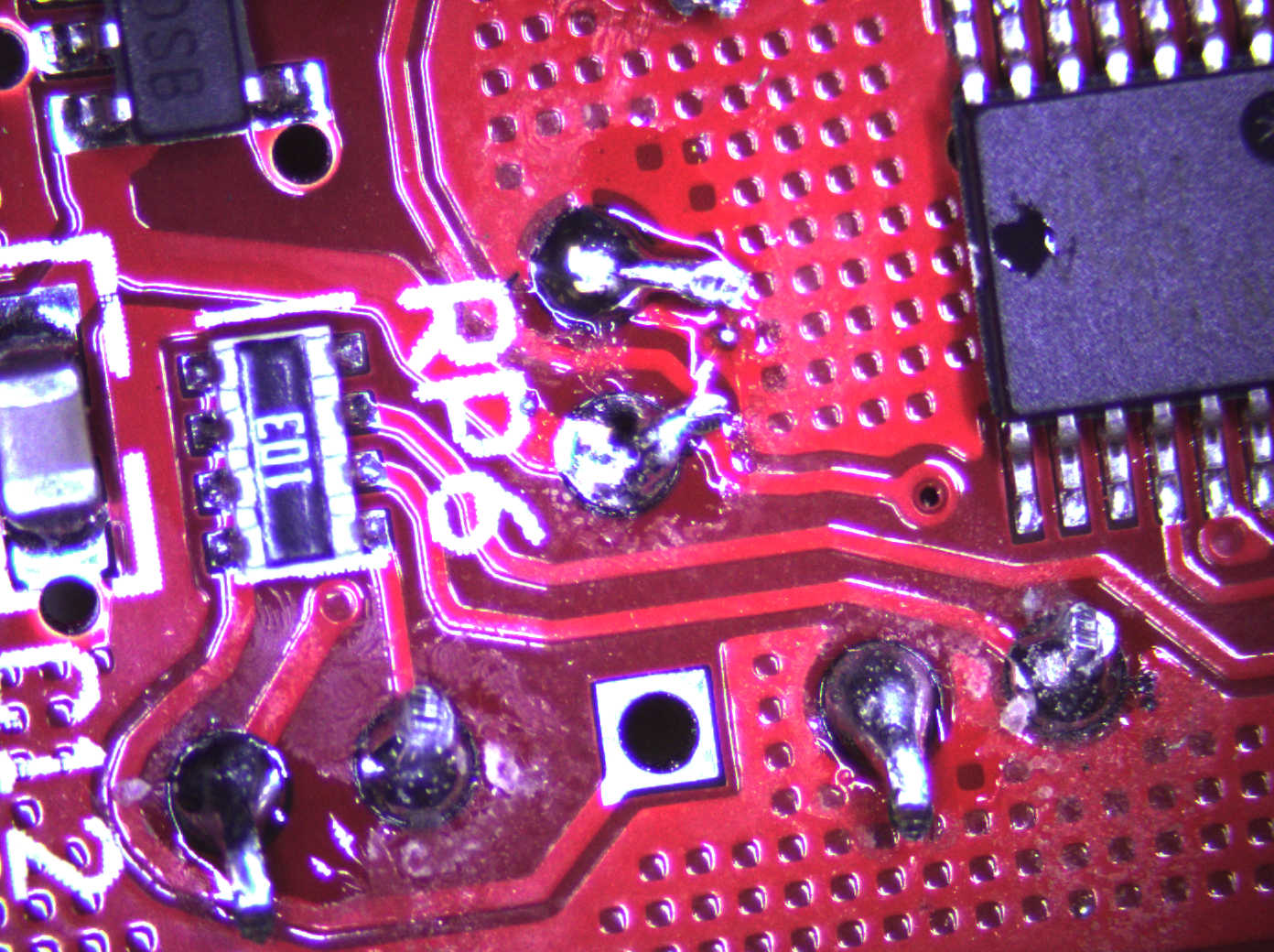 Were you able to fix it?
Don
"After silence, that which best expresses the inexpressible, is music" - Aldous Huxley
Technical Articles List: https://www.audiosciencereview.com/...and-inquisitive-minds.8121/page-3#post-808622
M

Not yet. I have to desolder the RCA jacks to get a better look at them. I may just reflow all the suspect joints and give the board a good cleaning. That may do the trick.
OP

Solder balls and flux everywhere is their trademark it seems. Thanks for the pictures and comments. Their fans often think I am harsh on them and these things are fine.
Amir
Founder, Audio Science Review
Founder, Madrona Digital
Contributing Editor, Widescreen Review Magazine
Click for My Technical Background
My YouTube Channel

Manbeard said:
Not yet. I have to desolder the RCA jacks to get a better look at them. I may just reflow all the suspect joints and give the board a good cleaning. That may do the trick.
Click to expand...

The product has a warranty, why would the owner not use it?
I am really a Wasp!
M

rebbiputzmaker said:
The product has a warranty, why would the owner not use it?
Click to expand...

I said it was probbably a simple fix and offered to take a look. He's aware of the warranty but leery since Shciit would most likely just exchange it for more schiit and I most definitely concur with that sentiment after opening this up. Is Schiit exactly earning people's trust with their products?

I bought some of their gear a number of years ago. Yes, a small company that manufactured something in the USA is a good marketing story. But the gear never seemed all that good, and then i found ASR. So I've cleaned all of the Schiit out from my life.
"He could be right, he could be wrong. I think he's wrong but he says it in such a sincere way. You have to think he thinks he's right."
~ Bob Dylan
You must log in or register to reply here.

N
Suggestion for headphones for Schiit Modi 3+ and Magni Heresy