Aftermarket USB cables seem to be all the rage with people paying as much as $15,000 for a short run of it!!! Lots of subjective performance reports are out there but none back with any objective measurements that demonstrates any difference. On the other side of the fence many believe there isn't or can't be any difference in USB cables ("they are all digital"). I thought it would be good to add some data to the conversation.

For my testing, I used the Sonore microRendu as my source host. This is a networked audio renderer and comes with improved USB implementation. See my review and measureents of the 1.4 version here: https://audiosciencereview.com/foru...-measurements-of-sonore-microrendu-v1-4.1867/

For DAC, I used our perennial favorite, the Schiit Modi 2 DAC. Of course I say that in jest as this is by far the worst DAC I have tested. It seems to be highly sensitive to power and USB conditions. I figured if there is one DAC that can show differences in USB cables, this would be it.

The first test was with a 28 gauge decent but generic quality 6-foot or so USB cable between the Sonore microRendu and the DAC in question. I then compared that to a very short, 6 inch or so generic USB cable: 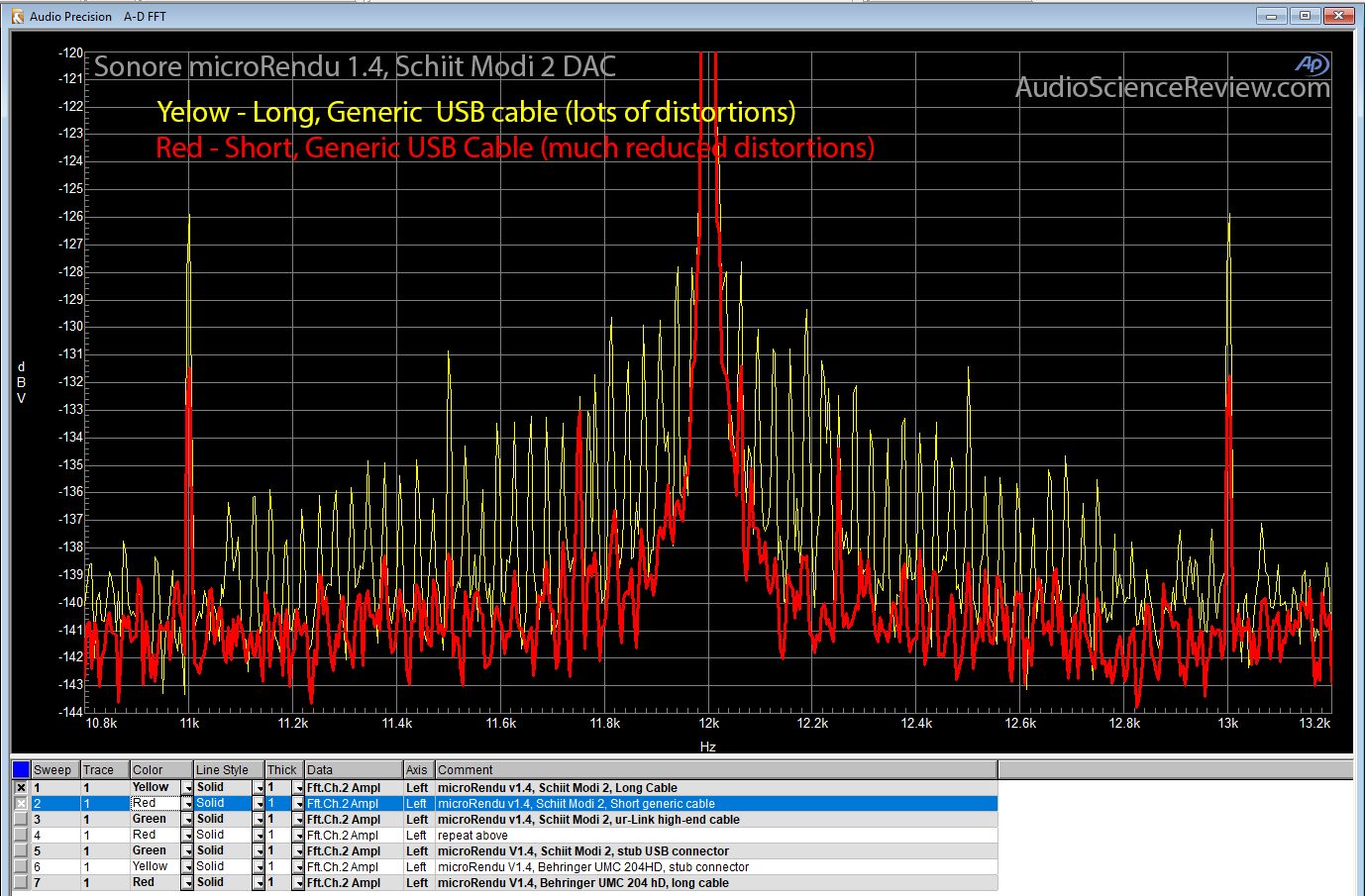 What do you know! We have the world exclusive, first and only objective "proof" that USB cables make a difference in the analog output of the DAC!!!

With long cable (in yellow) we have all of those jitter/distortion spikes around our main and only tone at 12 Khz. None should be there.

With much shorter USB cable, their levels is much diminished leaving just a couple of notable spikes.

I also have on loan a short audiophile USB cable from Triode Wire Labs called uR-link. Unfortunately I can'f find the product specific page for it. It is a shorter version of this on their web site:

Here is how it did compared to similar length generic cable: 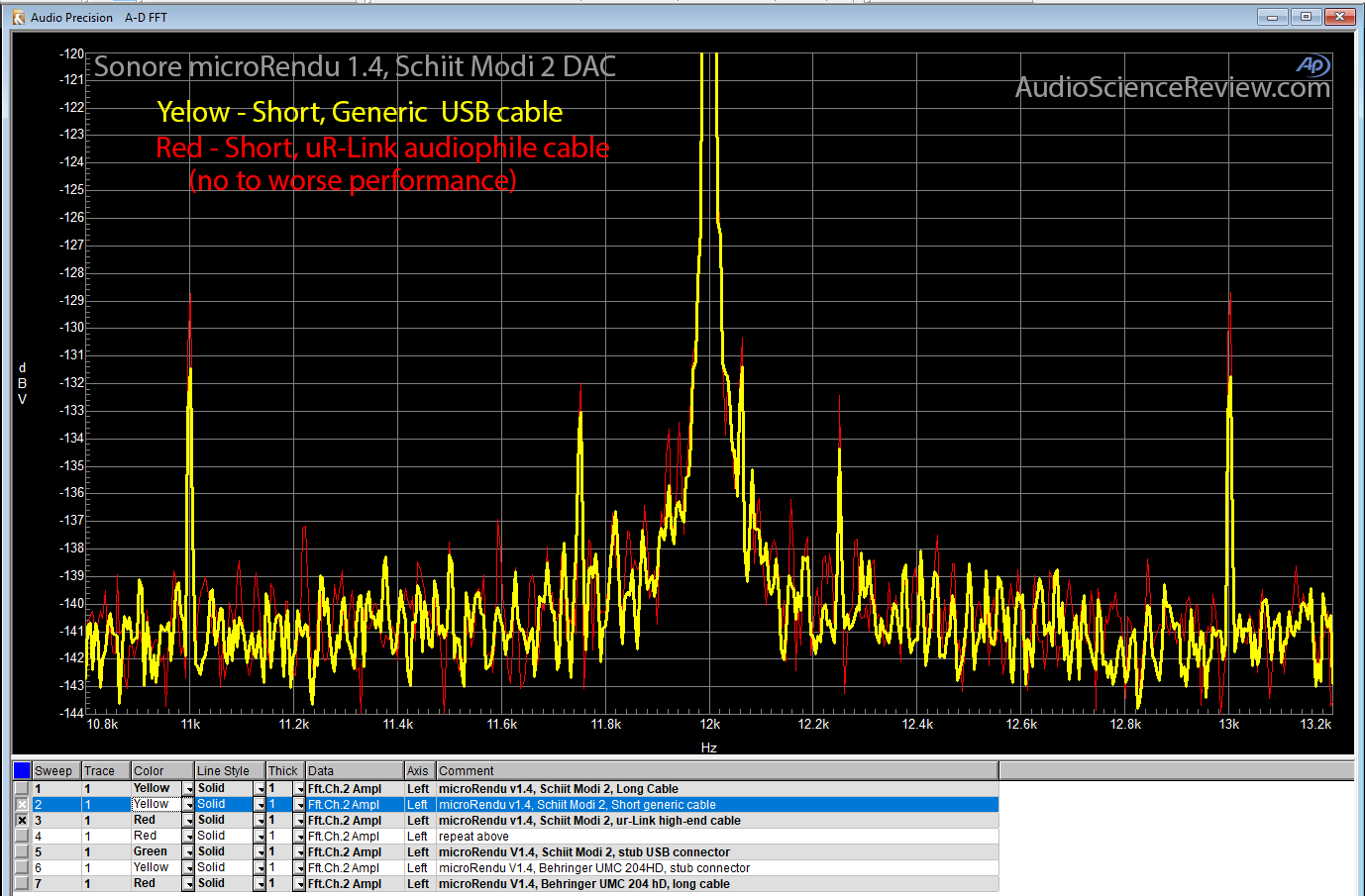 As I noted, it seems to actually do worse than my generic cable. I ran the test again and the output was different so not conclusive. But I say don't waste your money on this cable. The mere fact that the cable is short is bringing the benefit, not any magic inside it.

Figuring shorter was the key to better performance, I used a generic "stub" USB gender converter. The one I tested came with one of my many audio tweaks/boxes and looks kind of like this: 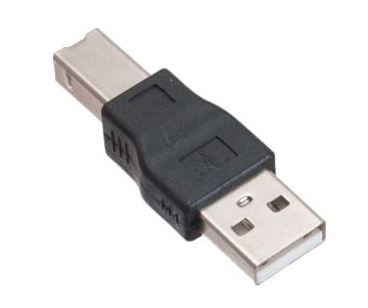 Here are the measurements, comparing with the short USB cable: 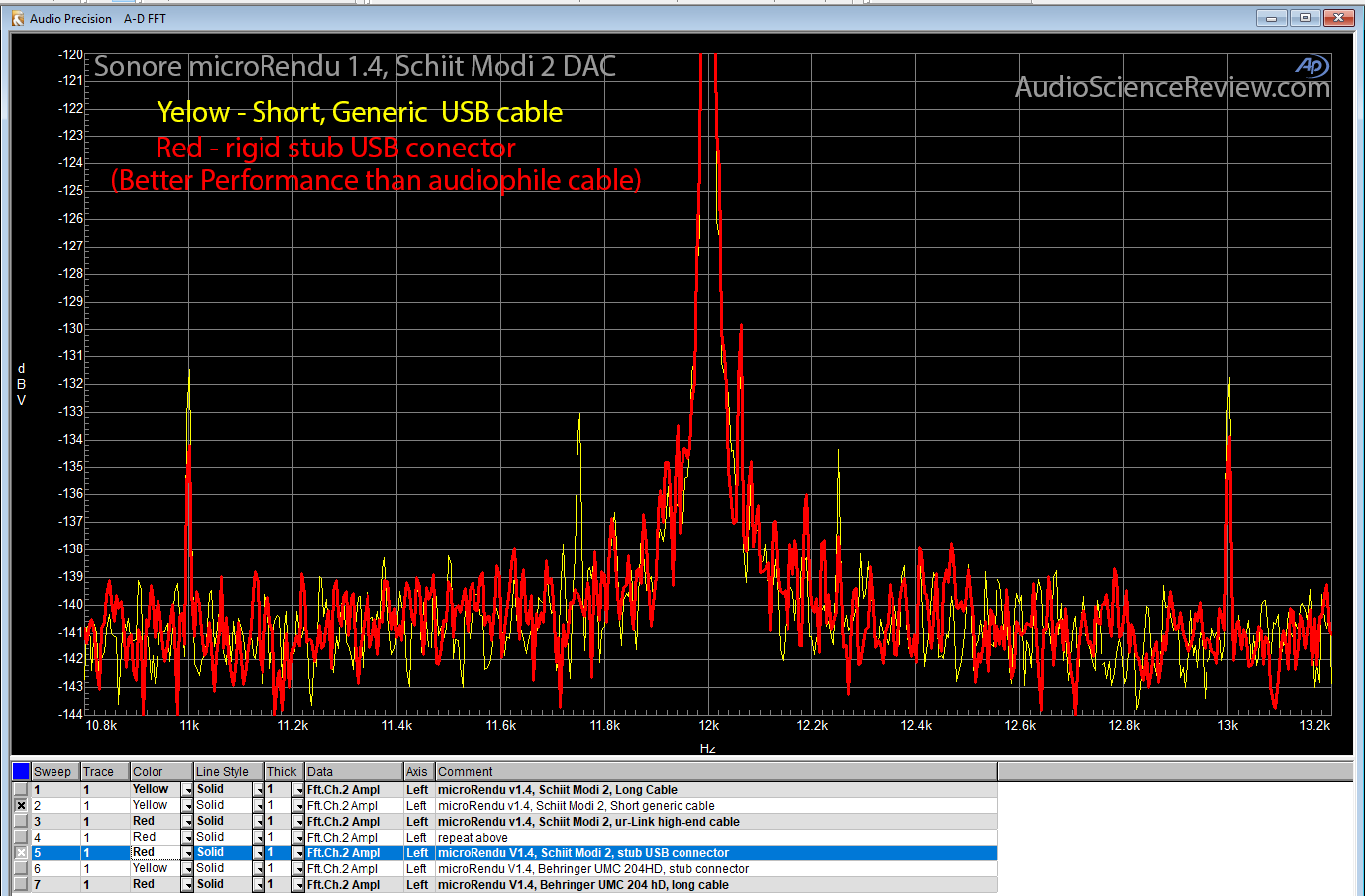 We see better performance yet!

For final test, I actually have an audiophile version of such stub from Uptone which came with ISO Regen (see test of that here: https://audiosciencereview.com/foru...ptone-iso-regen-review-and-measurements.1829/) 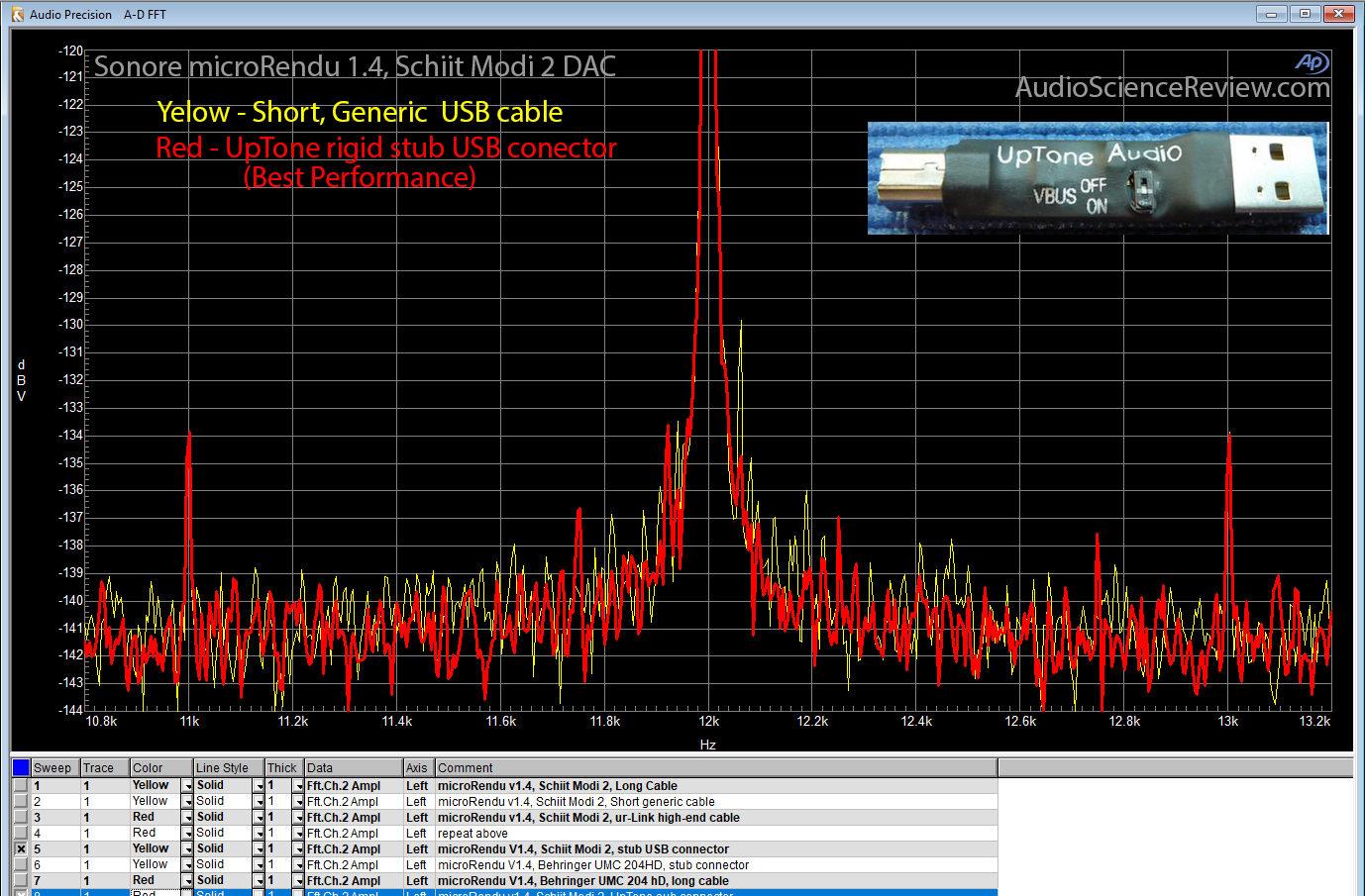 The Uptone stub does even better, producing the cleanest output I have seen from Schiit Modi 2.

Conclusion So Far:
So it seems that USB cables do make measurable differences in the output of DACs with the shortest being the best. And carefully made one from Uptone being even better.

Should you run and buy these short cables/adapters? No, you shouldn't . You knew that was coming, did you not?

Let's continue our testing, this time using another cheap DAC: the Behringer UMC204 HD which at $79 is even cheaper than the Schiit Modi2. Here I compare the long cable to generic USB stub converter: 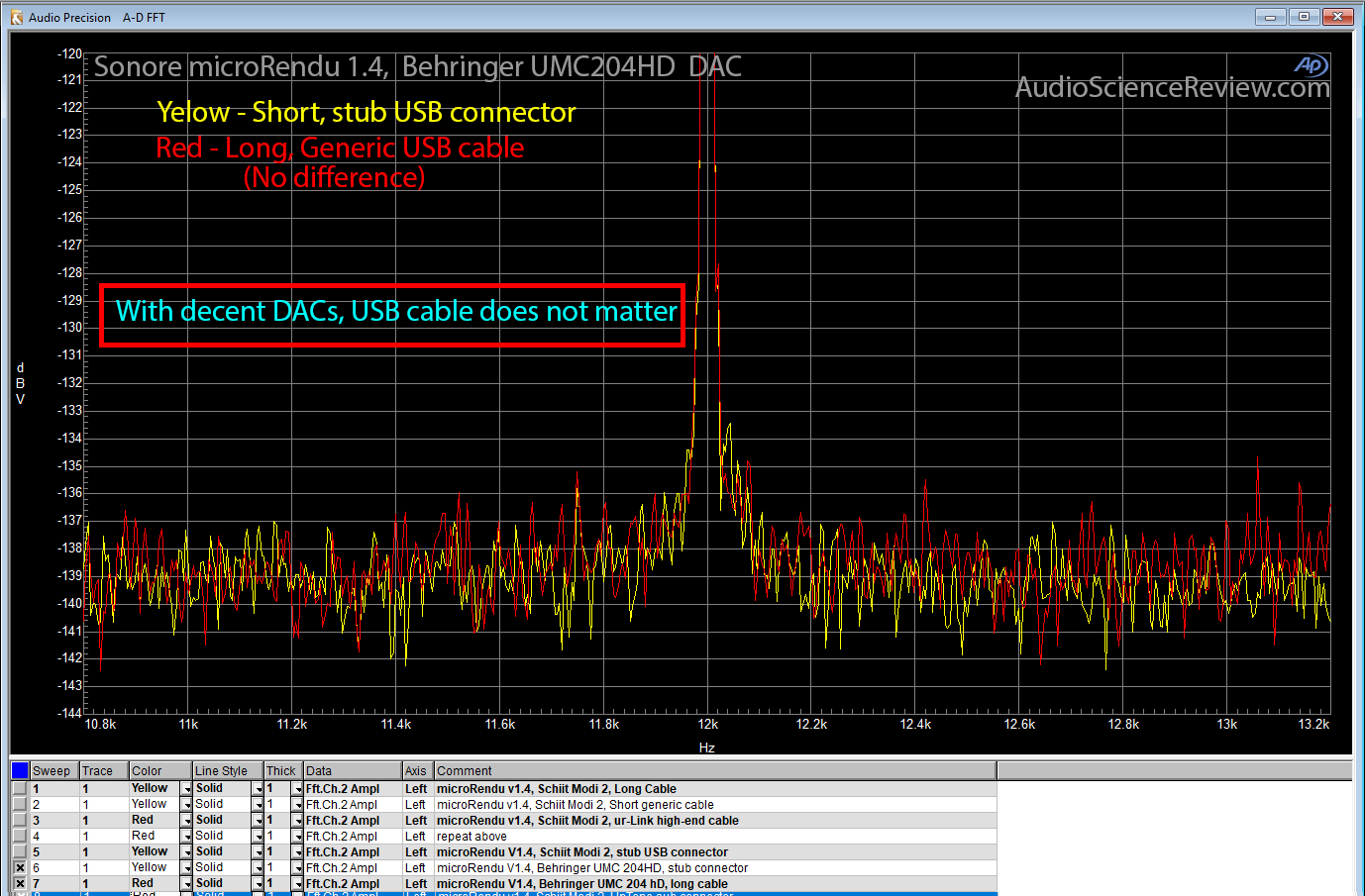 As we see, there is no difference between the worst performing USB cable (long and generic) and the shortest one (USB stub).

High performance DACs are liable to be even more immune to such vagaries, completely neutering any electrical advantage to shorter, better USB connections.

Graphs Can Lie
Note the vertical scale in my graph. You see that the top of the graph is at negative -120 dbV. This means I have highly exaggerated the differences. If we show that full scale and compare the worst (long USB cable) to best (UpTone adapter), we get this: 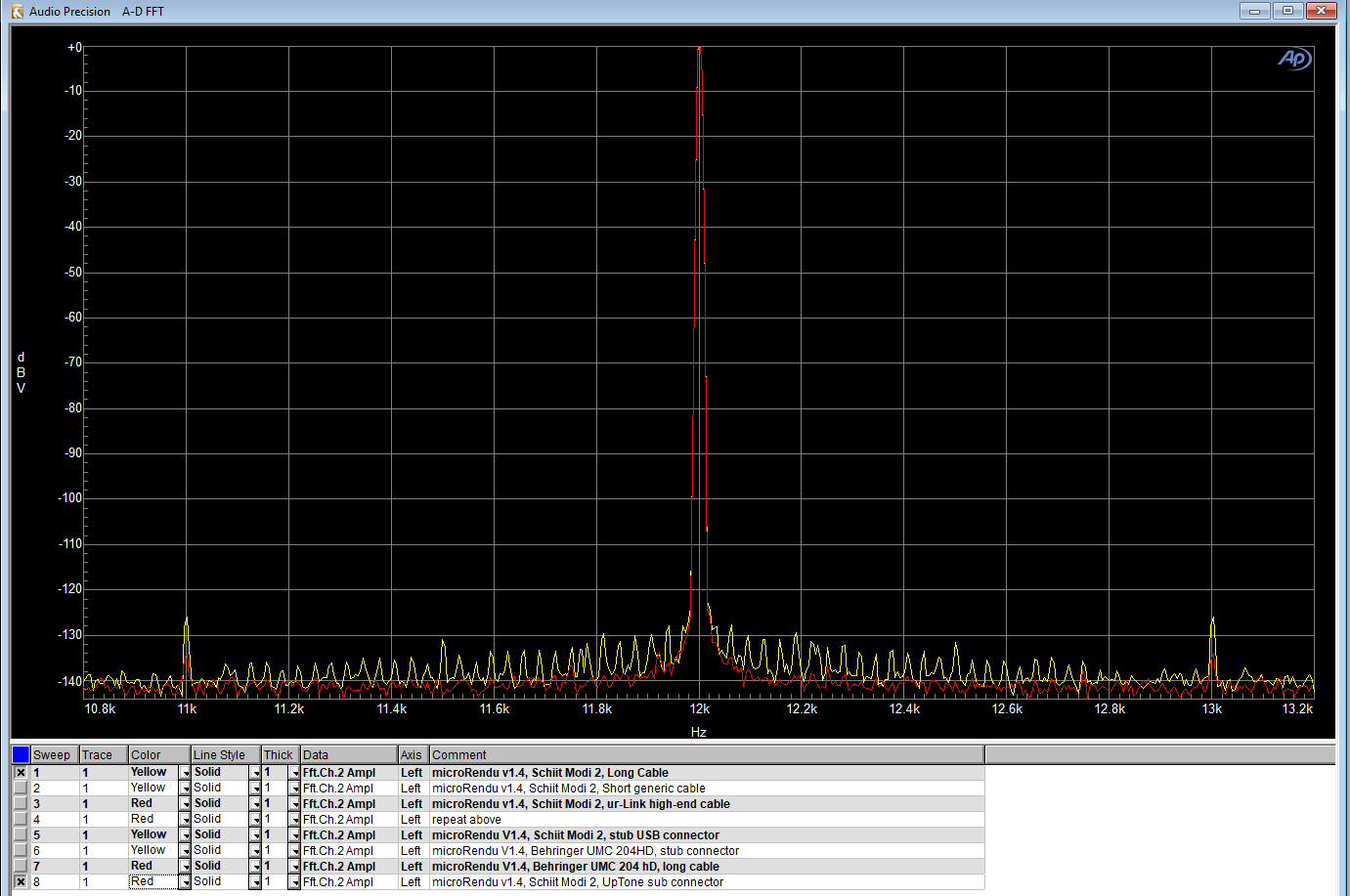 While differences still show, they are so, so down in level as to not ever be an audible concern. BTW, the Schiit normally does much better if fed with clean USB power. Here I am powering the Sonore microRendu with my high quality lab supply which helps a ton in cleaning its output.

So as usual, we can show measurements that bother the eye but not the ear.

Summary
For the first time anywhere, we have shown that we can change the analog output of a DAC by changing how we feed it in digital domain in USB. Shorter cables provided improvements that were visible. Alas, two other factors conspire to make this non-news:

1. Schiit Modi 2 that I have tested is horribly designed. It is sensitive to both USB power and data noise. Even a cheaper DAC like Behringer shows that such sensitivity is due to poor DAC design than anything to do with USB cables. The Behringer performance is better than Schiit with any cable and shows no need for tweaking the USB cable.

2. I have hugely magnified these differences. Without this magnification, the differences even with lousy DACs like Schiit are literally in the noise.

So nothing here explains the fantastical subjective differences people report between USB cables. I suggest those people conduct some blind test to get to the truth of whether they are hearing any differences especially if they are using better DACs than Schiit Modi 2.

I'll try to help any component with the shortest cable that I can provide it. My DAC is fed with an 18" Belkin USB cable.

Did you know that there is a certification scheme for USB cables?

Certified producers are allowed to use the official logos.

svart-hvitt said:
Did you know that there is a certification scheme for USB cables?

Certified producers are allowed to use the official logos.

I use the exact same cable. Big spender

Here's something useful and cheap enough to test. 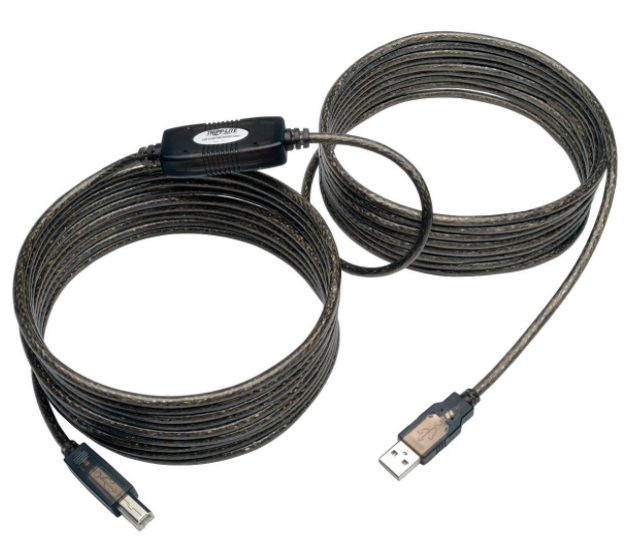 I have a 33 ft version of the Monoprice active USB extenders. They make no difference vs a short cable at least up to 192 khz with a few DACs I have on hand.
OP

amirm said:
Seems nice but with $50 price tag for 1 meter in US through Amazon is still quite pricey.
Click to expand...

Half that price in Sweden, good to know what solder tin they use (Almit SR-34 Super).

RayDunzl said:
Here's something useful and cheap enough to test.

A 25 foot straight cable worked at low rates but not at high audio bit rates, which was the reason it was purchased.
Click to expand...

watchnerd said:
25 feet? why not use wifi?
Click to expand...

Just make sure to use a good quality antenna. Gold connector and a rare hardwood impedance matching block at a minimum.
Digital audio is a rare example of perfect technology; it has given audiophiles everything they wanted. But now they're bored...
S

svart-hvitt said:
Did you know that there is a certification scheme for USB cables?
Certified producers are allowed to use the official logos.
Very few "hifi" cable producers sell certified cables.
Click to expand...

Have to disagree, nothing to do with audiophile company or not. Any serious cable company should publish technical info/specs and preferably certify their products.

It is most likely the impedance match on the USB lines that is not taken care of on the Schitt. I imagine that is the only reason for the difference on cables short versus long.

RayDunzl said:
I have one (25 feet) between the PC and DAC.

A 25 foot straight cable worked at low rates but not at high audio bit rates, which was the reason it was purchased.
Click to expand...

This begs the question:

Why aren't you using wifi or ethernet at that distance?

watchnerd said:
Why aren't you using wifi or ethernet at that distance?
Click to expand...

RayDunzl said:
Because I'd have to go out and buy more crap I don't want and don't need.
Click to expand... 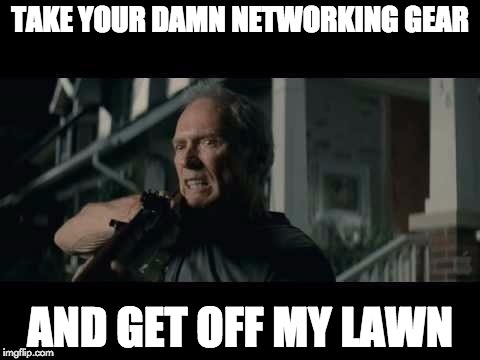 Quality
independence, we do it together..
https://www.patreon.com/audiosciencereview
You must log in or register to reply here.