This is a review and detailed measurements of a (built) Bottlehead Crack Tube headphone amplifier. It was sold from one member to another and kindly sent to me in between for testing. The version I have has the "speed ball" current source which brings its cost up to US $430.

The original owner did a beautiful job of building this kit: 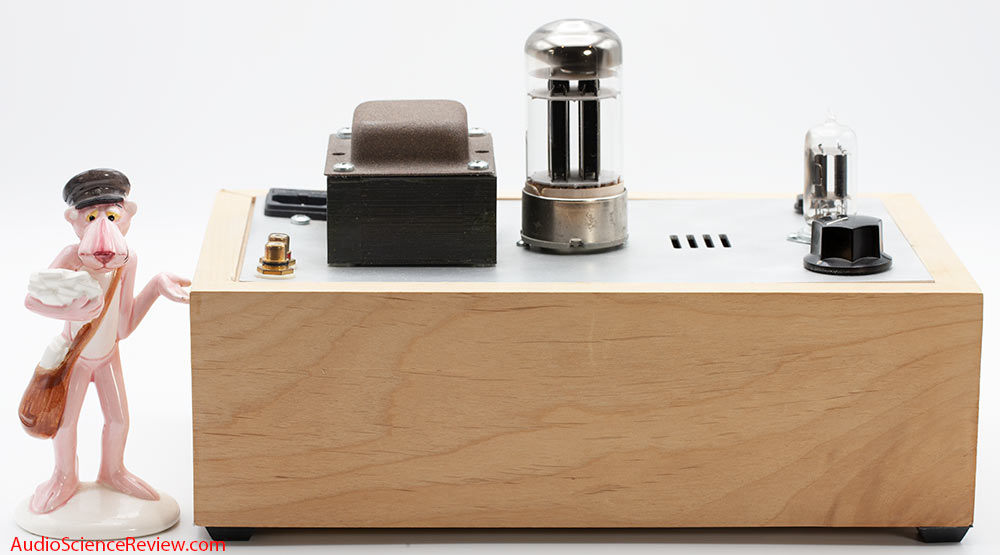 And here are the internals: 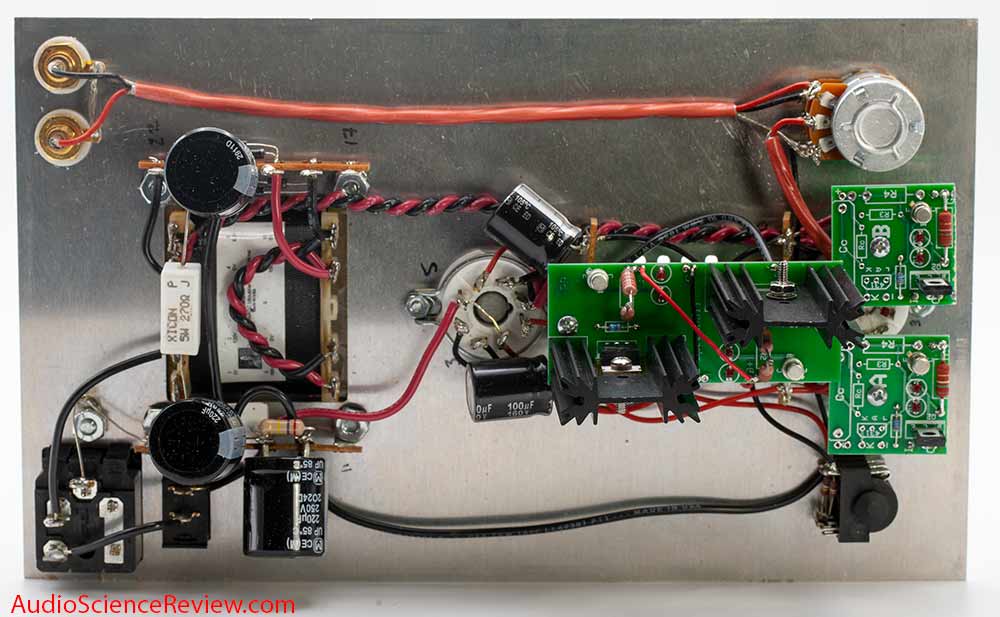 I looked thorough the manual and it seems exceptionally well written and annotated.

I liked the feel of the volume control although as you will see later there is significant channel imbalance.

Tube Headphone Amp Measurements
As usual we start with our dashboard: 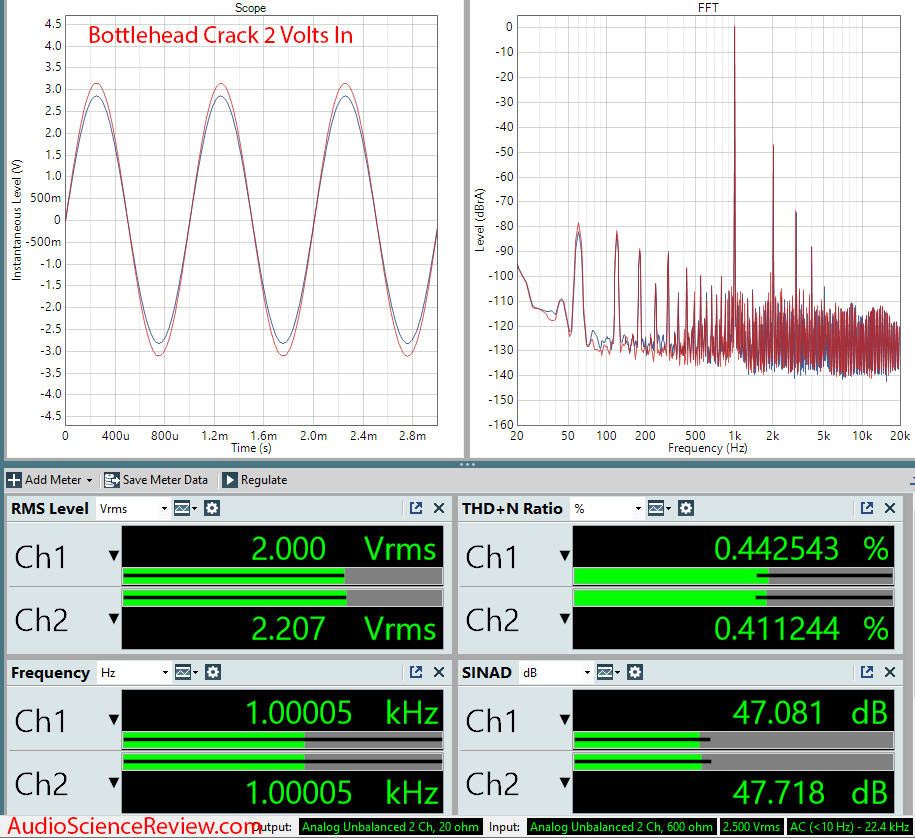 It is a shock to the system coming from testing many solid state amplifiers to see SINAD (sum of distortion and noise) to be so low. That said, we have seen worse: 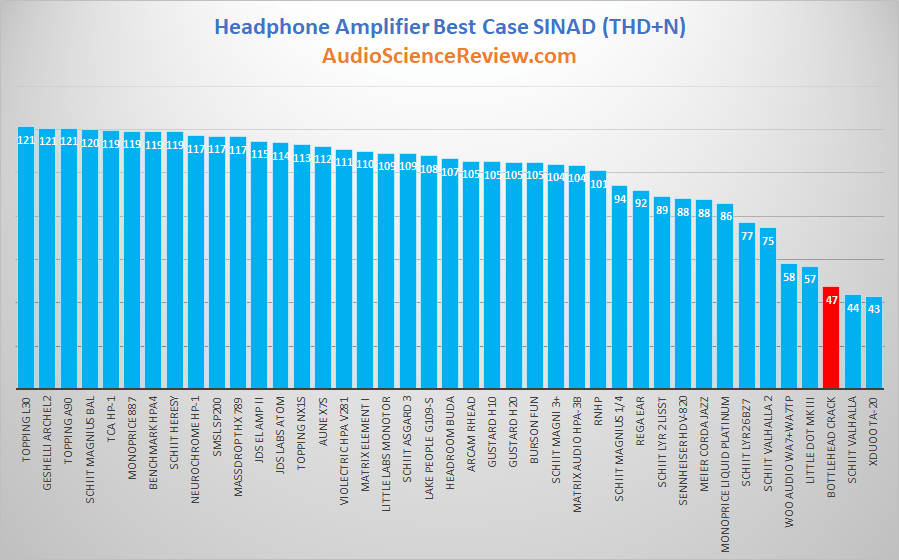 Second harmonic dominates the most so audibility should be less than it seems.

Signal to noise ratio is not great due to high mains noise which I could not get rid of by playing with grounding: 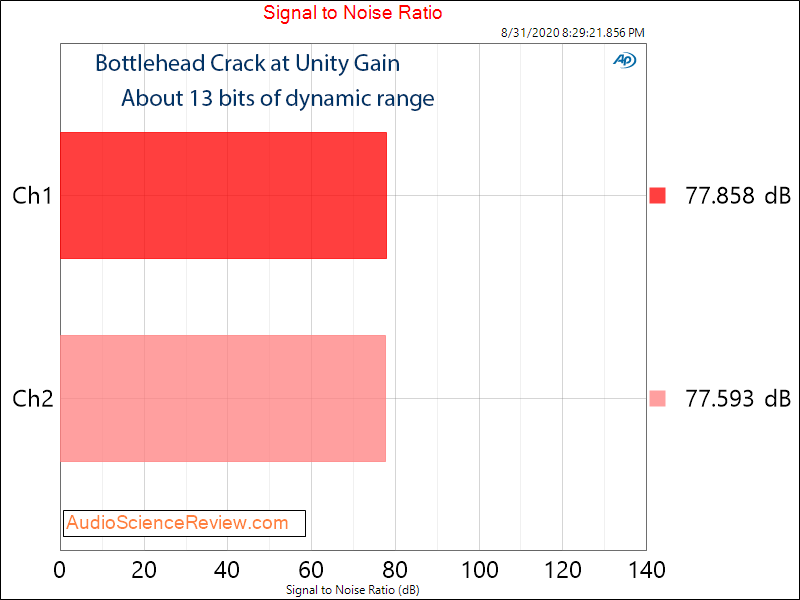 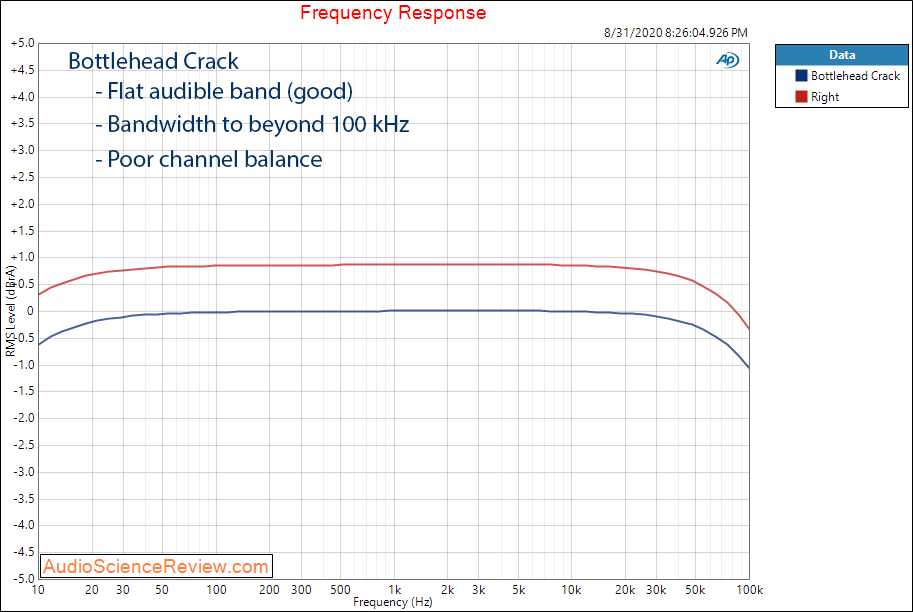 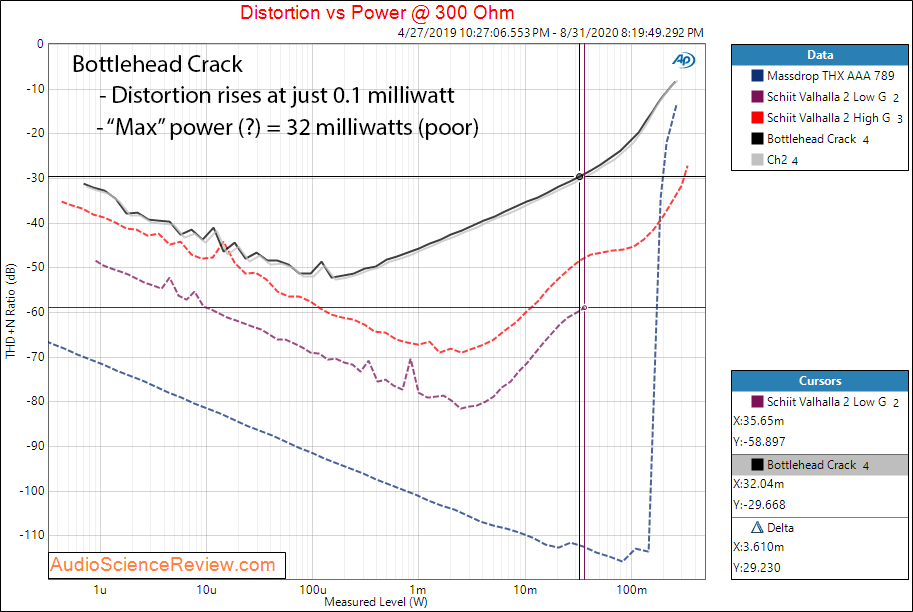 Distortion sets in at just 1/10th of a milliwatt! Since there is no hard clipping my standard method of measuring power at that point is thrown out the window. Using -30 dB as an arbitrary limit gets is 32 milliwatts which is not that high. 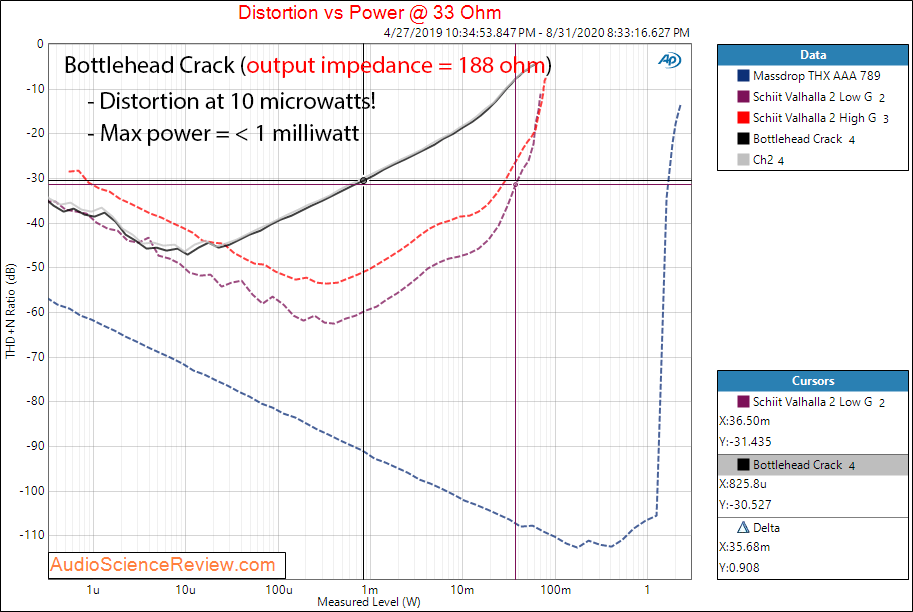 The issue here is that without an output transformer, we have a high output impedance of 188 ohm (compared to close to zero for most solid state designs) so a ton of power is lost in the device itself. The high impedance will also impact the frequency response of many headphones as you will see shortly.

Subjective Headphone Amplifier Listening Test
I started testing with the Sennheiser HD-650 and the result was unexpected: almost infinite amount of power with warmer/nicer amount of bass. I switched to my standard amp, the RME ADI-2 DAC and it simply could not keep up with the Crack either in amount of power or bass. Was the "tube glow" finally resulting in "euphoric distortion?" Not so fast...

I have on loan a GRAS 45CA headphone test rig so I decided to measure its response while being driven by a solid state Topping A90 headphone amplifier and then Bottlehead Crack: 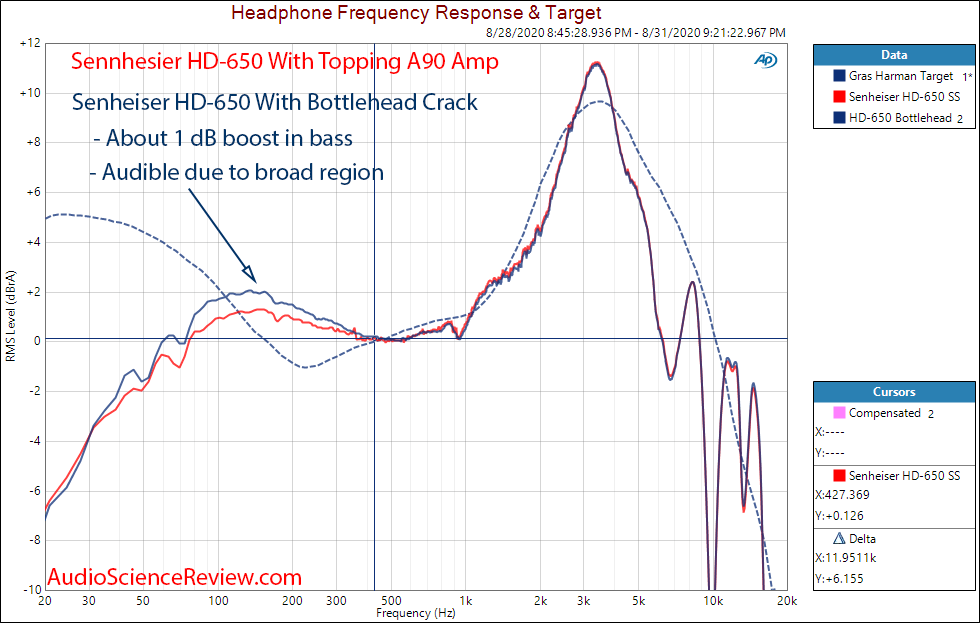 The response is almost identical above 500 Hz but below, there is a broad lift to the tune of 1 dB. That means a lot of bass notes are amplified more due to high impedance of the Bottlehead Crack changing the response of HD-650.

It was a good thing I did not start testing with Drop Ether CX as it was a total disaster: almost no output and what was there was severely distorted. The Ether CX has a low impedance of 25 ohm and is very inefficient to boot. The high impedance of Crack meant that hardly any power was delivered to the amplifier and what was there, was at max volume with ton of distortion. Whoever thinks distortion of this type is pleasant should listen to this combo.

I also tested with AKG 371 and Sony MDR-7506 headphones. Neither of these got the beneficial frequency response. While it was hard to tell in my quick testing, I thought the sound was a bit distorted. Available power was not that great but usable.

Conclusions
This is a nice tube headphone amplifier kit and the built version is a good example of how to do it right. Objective performance shows severe problems. However it also points to lots of power availability and potential for modification of frequency response of the headphone. As it turns out, these factors work in favor of Sennheiser HD-650 producing beautiful tonality and music. Other headphones though produced everything from unusable to "what did I buy this tube amp for?"

I hope the new owner has an HD-650 type headphone in which case he will be happy.

Personally I would use EQ to correct the bass response of the HD-650 and use a powerful solid state amplifier to drive it. But if you want to go with the Bottleheack Crack amplifier kit, I understand and won't hound you!

Drove 150 miles roundtrip to dentist appointment and also to pick up a speaker and return one. I spent money out of my own pocket. And no, I don't need you to reimbursement for this since I got a tooth cleaning out of it. Thought about running out to the store and showing off my clean teeth but couldn't figure out how to do that with a mask. But hey, if you insist on putting more money in my pocket, I am not going to complain. You can donate using : https://www.audiosciencereview.com/forum/index.php?threads/how-to-support-audio-science-review.8150/
Amir
Founder, Audio Science Review
Founder, Madrona Digital
Contributing Editor, Widescreen Review Magazine
Click for My Technical Background
Master List of Audio Reviews

The panthers seem to be getting more and more unpredictable. Or more predictable?
T

Apart from the bass boost, how else would you describe it affecting the sound of the HD 650? Mids, treble, spatial or other “special effects” etc

Interesting. I would love to see the schematic for this amp. Lots of second harmonic...

tktran303 said:
Apart from the bass boost, how else would you describe it affecting the sound of the HD 650? Mids, treble, spatial or other “special effects” etc
Click to expand...
I didn't detect other effects other that pleasant increase in low frequency response.
Amir
Founder, Audio Science Review
Founder, Madrona Digital
Contributing Editor, Widescreen Review Magazine
Click for My Technical Background
Master List of Audio Reviews

After looking at solid state stuff to look at the bottom of this it is so simple.
OP

cistercian said:
Interesting. I would love to see the schematic for this amp. Lots of second harmonic...
Click to expand...
Here you go: 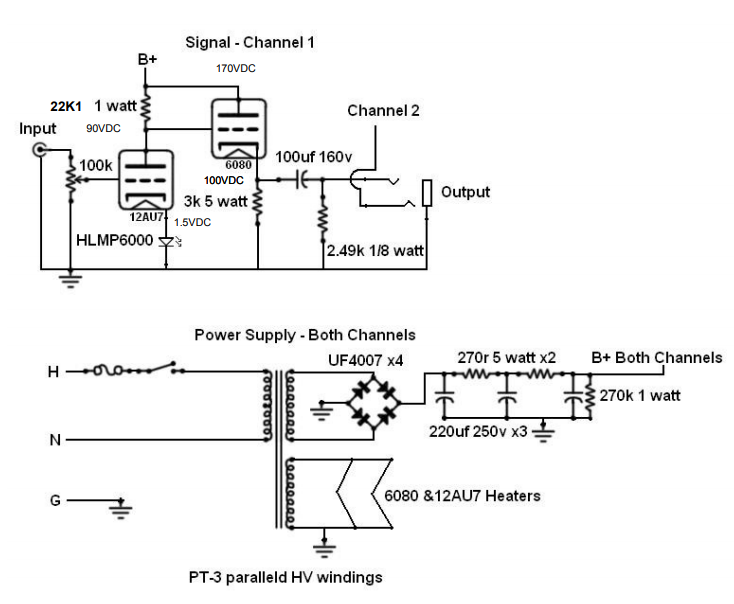 This amp is only intended to be used with high impedance headphones (> 200 Ohm).
It's sole purpose in life is to add color to the sound by adding lots of harmonics (multitone ?) and having a very high output resistance.

It can easily reach 200mW in 300 Ohm and is why it can play loud. The distortion will be in the percentages but mostly for the lows where it doesn't degrade sound that much.

See it as the Pass ACA for tube amp builders, you only have to be much more cautious because of the high internal voltages when tinkering with it.
Last edited: Sep 1, 2020
People have a tendency to overestimate their hearing capabilities.
Use your ears to listen to music not as an analyzer.
T

For over a decade (or two) the Bottlehead Crack was the de-facto partner of the HD600/HD650.

Now I better understand why.

Now if someone can design a VST/AU plugin to emulate this amp, that would be quite.. something.

amirm said:
Here you go:
View attachment 80850
Click to expand...
Thanks! While you posted this I found it via a google search!
R

Whenever someone says that 2nd order harmonic distortion isn't a fidelity problem, I sense the anguished screams of Alex Voishvillo in the distance... 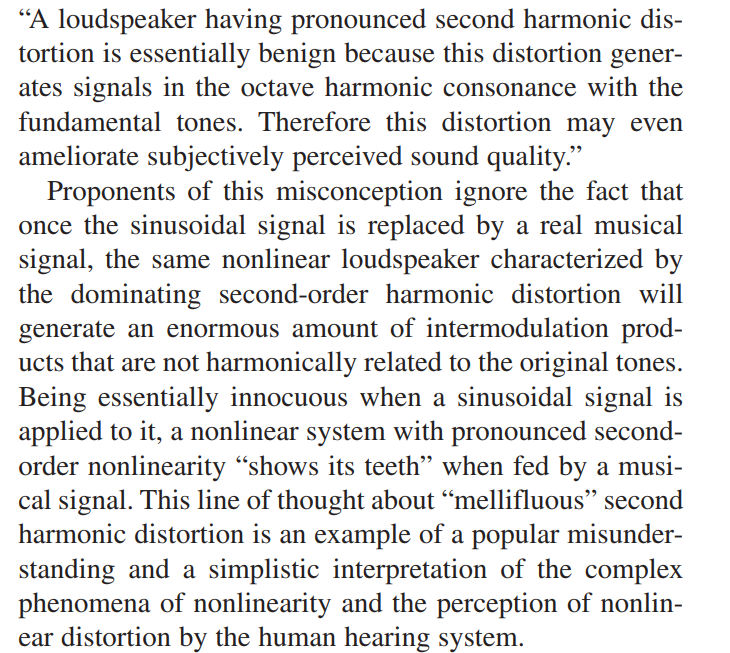 (the excerpt here comes from a truly lovely, albeit aging, pair of AES papers on nonlinearity and multitone testing)

Edit: In that spirit, @amirm do you reckon we could see a loaded multitone?
Last edited: Sep 1, 2020
Owner of Cascadia Audio
Liberté, égalité, métrologie
D

This is the polar opposite of the THX current feedback amps. It's literally supposed to be a bit distorted. That mains hum if I had to guess is actually heater to cathode leakage current, which can happen if the heaters are AC and aren't floated significantly above ground.
current setup:
RME ADI-2 Pro FS->Focal Shape 65s/HD6XX's
Schiit Modius->Serpent SB4000 compressor/DIYRE Line2Amp->ADI-2 Pro
ART TransX->ADI-2 Pro FS

renaudrenaud said:
Anti Topping / SMSL product.
Click to expand...
The fun distortion is the whole point. Not my cup of tea but cool because it works as intended.
Reference grade it is not. Lot of old tube gear sounded pleasant as it distorted like mad...and some
really like it. For those...it is crack!

tktran303 said:
Now if someone can design a VST/AU plugin to emulate this amp, that would be quite.. something.
Click to expand...
The problem is that the harmonics and output resistance are tube dependent and the output resistor effect is headphone dependent.
To emulate that you would have to to choose between different tubes and be able to select a number of high impedance headphones (know their impedance)
That's why there won't be a simulation and amps like this exist.
It is simple amp with a good build manual so (almost) everyone can build one.
Last edited: Sep 1, 2020
People have a tendency to overestimate their hearing capabilities.
Use your ears to listen to music not as an analyzer.

dfuller said:
That mains hum if I had to guess is actually heater to cathode leakage current, which can happen if the heaters are AC and aren't floated significantly above ground.
Click to expand...
My thought too. The schematic clearly shows the heaters grounded. It would seem a trivial mod to float the heaters up a bit.
The night is coming, and its filled with dark surprise.

I should add...great job Amir! A fun review for sure.
R

cistercian said:
The fun distortion is the whole point. Not my cup of tea but cool because it works as intended.
Reference grade it is not. Lot of old tube gear sounded pleasant as it distorted like mad...and some
really like it. For those...it is crack!
Click to expand...
No problem at all!

It just like the antithesis of the cheap ChiFi we like to buy, just a funny point.

JohnYang1997 said:
It would be better if there isn't imbalance between the channels and if there isn't the mains noises.
Click to expand...
And if it didn't smother all your music with distortion...oh wait.
You must log in or register to reply here.
Share: Facebook Google+ Reddit Pinterest Tumblr WhatsApp Email Link