Time for another bargain DAC, the Topping D30 DSD/PCM DAC. It retails for a mere $120 on Amazon including shipping: https://www.amazon.com/TOPPING-Decoder-Coaxial-Optical-CS4398/dp/B01L1SDKUQ 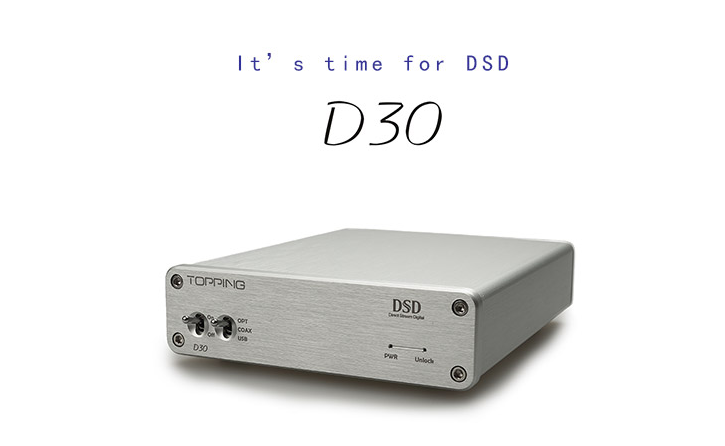 I will do a hardware tear down later but for now, the enclosure seems nice quality and a step above typical DIY shops. The unit is externally powered and surprisingly with a Topping branded switchmode power supply. Typically people buy these in open market instead of having one made for them with custom label. It has higher than normal output of 15 volt which helps it with higher output drive as you see later.

Capabilities are excellent with PCM up to 192 Khz and DSD up to DSD128. Furthermore, the unit comes with not only USB input but also coax and optical S/PDIF inputs. Nice!

Measurements
As always I started with J-Test to measure noise floor and jitter. For reference, I also test the Behringer UMC204HD, our king of low cost DACs: 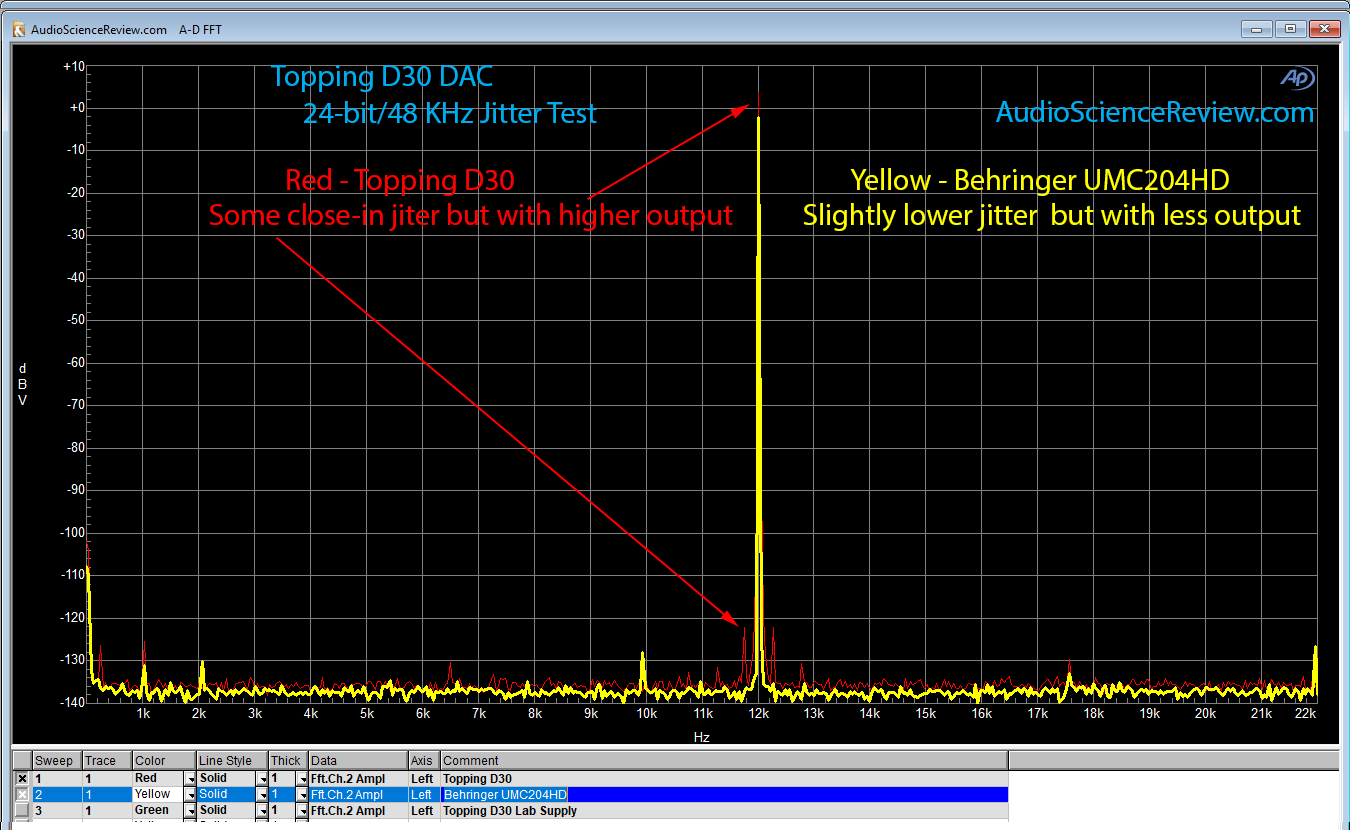 Noise floor is identical to Behringer but with the added advantage of having higher output over Behringer. There are two jitter/noise components visible:

1. At the mains supply way to the left of the graph. Replacing its power supply with my linear lab supply as usual eliminated that. The levels are so low that it is not remotely audible concern.

2. Tight sidebands around our main tone as indicated by the red arrow. These did not go away with lab supply. Seeing how the sidebands hug our main tone so closely they are hugely subject to masking and at any rate, given the higher output level, their amplitude is lower than it seems. So again, not an audible issue at all.

Next I tested 1 Khz harmonic distortion at 44.1 Khz: 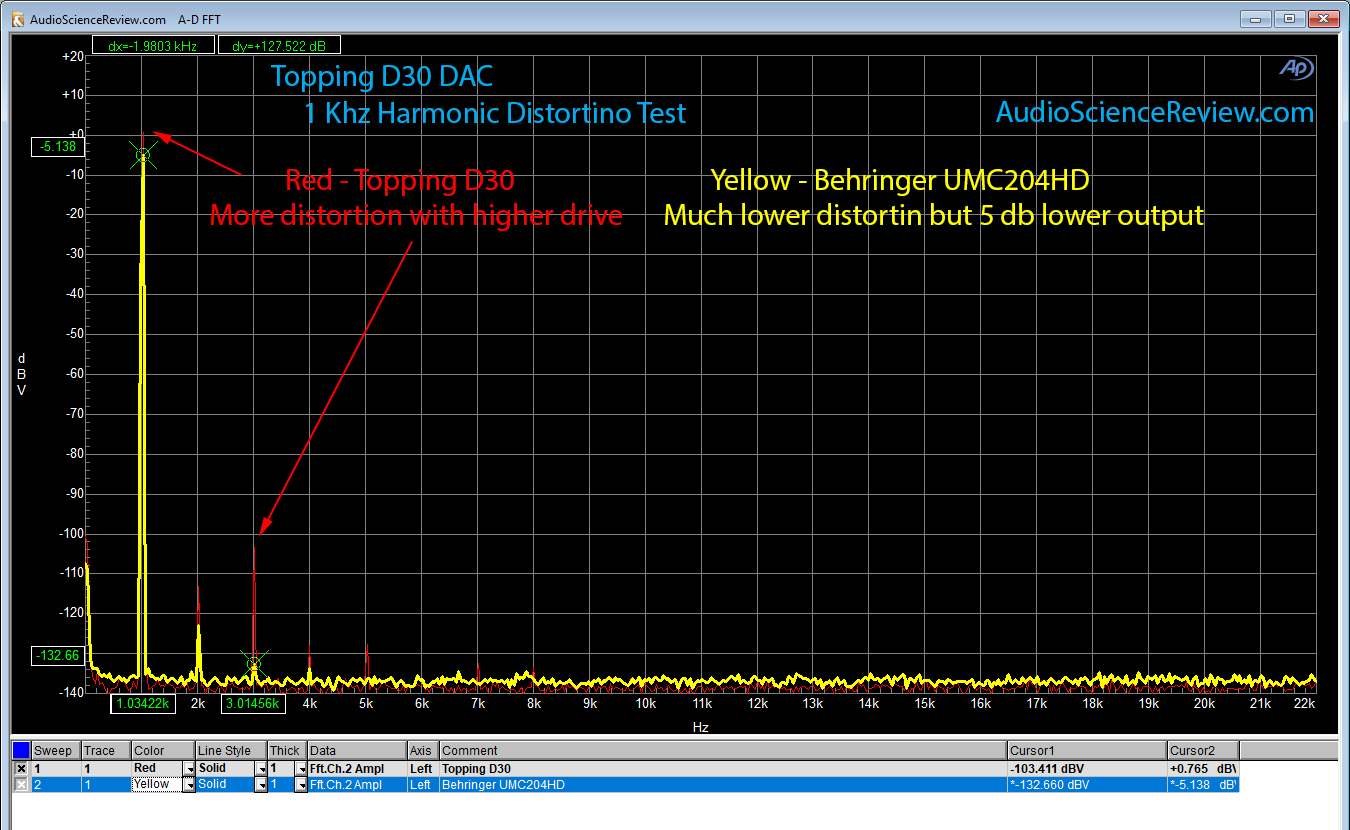 Here the Behringer shows off again with its superbly lower harmonic distortion which no other DAC has managed to match regardless of price. Differential between the tone and third harmonic on the Behringer is an excellent 128 db. Same differential on the Topping D30 drops to 104 dB.

Again, this is not an audible concern but would have been good to see some DAC try to unseat the Behringer in this regard!

The Topping has one major advantage here though and it is its much higher output level. Being externally powered, the Topping D30 has about 5 dB more output which solves the main problem with the Behringer which is its anemic output. More on this in the subjective section.

In summary, measurements show no audible concern and almost as clean as I like to see.

Listening Tests
I did some quick informal sighted listening tests comparing the Topping D30 to Behringer UMC204 HD. I connected each one sequentially to my Stax headphone. My Stax headphones despite having dedicated amplifiers have anemic output. With the Behringer, I could get them to OK level but any higher and distortion climbs rapidly in the Stax headphone.

Listening with the Topping D30 however, was a joy as it had enough drive to give me satisfying listening level. The louder levels allowed bass performance to be better and hear more detail than the Behringer. I could still use a tad more output, yes going deaf in my older age , but it is certainly enough as is.

The other nice thing is native playback of DSD as that is the first clip in my audiophile playlist and it is nice to see it play as is rather than converted to PCM though Roon.

The sound is so satisfying that I am still going through my playlist as I type this!

Summary
The Topping D30 provides a feature-rich consumer DAC with lots of digital inputs and compatibility with DSD. Its engineering performance is near ideal with no notable audible issues. The build quality on the outside is very nice and step above bargain basement devices. Audibly it unseats the Behringer easily due to higher output level.

Amir, many thanks and kudos to you for testing. I wonder if these results will dampen excitement about the Behringer UMC-204HD around here.
OP

Great review Amir. Perhaps you should use Amazon affiliate links. They could help pay for more products to review

Shame about the X-rated name, though.

Any comparisons to an upscale Dac besides the reference studio standard Behringer ...

I will do a listening test against the exasound and report back.
Amir
Founder, Audio Science Review
Founder, Madrona Digital
Review Thread Rules
My Technical Background
My YouTube Channel

amirm said:
I will do a listening test against the exasound and report back.
Click to expand...

I don't know if it was a counterfeit version or if there is a different revision now, but it makes me hesitate in recommending it.
OP

I looked and only found the color of a component being different. That is common and not a problem. Is there more differences found?

He also complains about overheating of the DAC (chip) leading to failure. I will open mine up and investigate.
Amir
Founder, Audio Science Review
Founder, Madrona Digital
Review Thread Rules
My Technical Background
My YouTube Channel
M

amirm said:
I looked and only found the color of a component being different. That is common and not a problem. Is there more differences found?

He also complains about overheating of the DAC (chip) leading to failure. I will open mine up and investigate.
Click to expand...

the oscillators are different for the xmos chip is the thing that worries me.
Last edited: Nov 13, 2017

mindbomb said:
the oscillators are different for the xmos chip is the thing that worries me.
Click to expand...

Looks like the parts supplier couldn't keep up with the demand following amirm's review.
Einstein: If you can't describe it simply, you don't understand it well.
Wombat: Or your explanatory skills are deficient.

amirm said:
I looked and only found the color of a component being different. That is common and not a problem. Is there more differences found?
Click to expand...

Well in the photo of the newer version all 3 clocks (1 crystal for USB, 2 XOs for audio DAC rate clocking) are gone from the top side of the board. They must have moved them to the bottom of the board. So yes, it appears to be a completely new layout.
•• Music lover; Owner, UpTone Audio LLC ••
D

This sounds like it might be a better quality and more capable setup than a Schitt stack for about the same amount of money.
https://www.amazon.com/Topping-D30-...rd_wg=pI4Lc&psc=1&refRID=3CQAWV60PR6FDGVANHBH
OP

Darwin said:
This sounds like it might be a better quality and more capable setup than a Schitt stack for about the same amount of money.
https://www.amazon.com/Topping-D30-...rd_wg=pI4Lc&psc=1&refRID=3CQAWV60PR6FDGVANHBH
Click to expand...

Is that a subtle hint for me to buy and test the A30???
Amir
Founder, Audio Science Review
Founder, Madrona Digital
Review Thread Rules
My Technical Background
My YouTube Channel
D

Why not go straight to the DX7?

watchnerd said:
Why not go straight to the DX7?
Click to expand...

I already have that one to review!!! It is more expensive than this combo though ($230 vs $400). I might test them against each other.
Amir
Founder, Audio Science Review
Founder, Madrona Digital
Review Thread Rules
My Technical Background
My YouTube Channel
S

I've bought myself this DAC based on a few reviews on the internet and of course Amirs' tests. I've only given it a quick listen but I have to say I'm pretty impressed for the price.

I also bought an Audioquest Jitterbug. Yes, I know I'll get the third degree because of it but;
a: I'm really curious if there will be any changes to any of the sound.
b: It cost me less than a tenner so I can always flog it for a little profit.

I bought a USB cable for a song off Ali Baba that's thicker than the standard one that comes with the Topping, plus it's braided, has gold connectors and ferrites! Wooo! I can't wait to hear this lifting of the veil and the deep blacks coupled with a deep and wide soundstage. It looks pretty nice though.
https://www.aliexpress.com/item/ATA...32816429013.html?spm=a2g0s.9042311.0.0.HB8pkW

Just awaiting some new AGC fuse holder knobs as my 2 year old nephew has been round the back of my amps and has managed to unscrew a couple (currently using one amp). Fingers crossed I'll be back to normal music listening duties soon.
You must log in or register to reply here.