This is a review and detailed measurements of the SMSL SA400 switching desktop power (speaker) amplifier. It was sent to me by the company for testing and costs US $660.

The SA400 is a powerful amplifier yet it comes in the same compact SMSL package and UI you would find in their desktop amp: 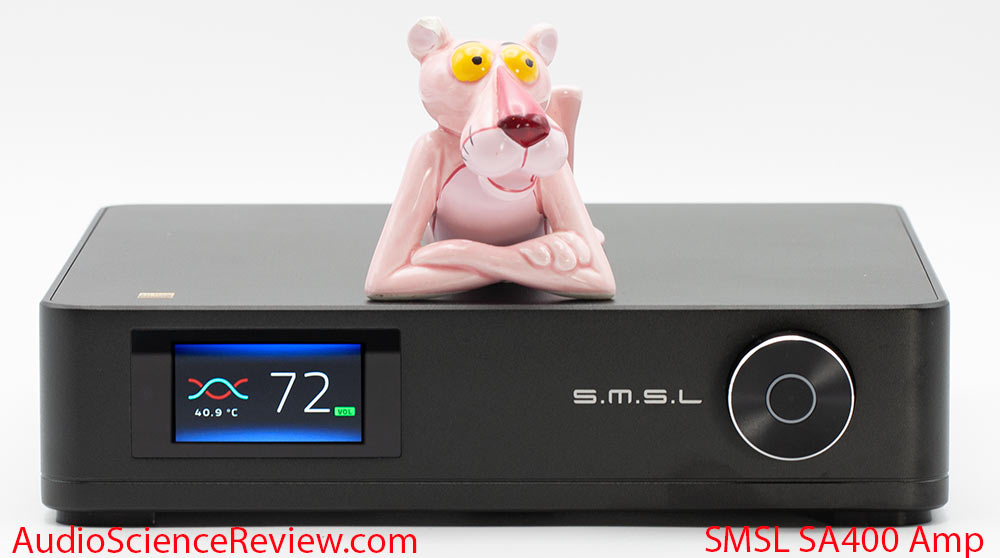 Amplification is provided courtesy of ST Micro STa516BE. The marketing material for SA400 shows a digital feedback but I don't see that in the ST specs. I am not clear if this is an addition by SMSL or it is part of ST amplifier chip that they don't talk about. Either way the input to the amplifier is digital so even though we have analog inputs, they need to be digitized to be used internally:

A resonant LLC switching power supply provides the heft juice needed to drive this amplifier in a small package.

Bluetooth input is provided as well as a subwoofer output with low pass filter. In addition, tone controls are included using a dedicated JRC chip.

There is an informative temperature measurement you can turn on which I did as you see in the picture above. With normal music listening (one channel) the unit stay pretty cool. In testing however, the case got fairly warm and the display indicated 58 degrees C. I suggest not stacking anything on top of SA400.

One issue is a mechanical whine from an internal coil. I can hear it even when nothing is playing from about 1 foot or so. When testing at higher powers, this became much louder but when playing music, you won't be able to hear it most likely.

SMSL SA400 Measurements
There are three gain settings but performance is very similar between them. I adjusted high gain for 29 dB which is my standard (defaults to 30 dB): 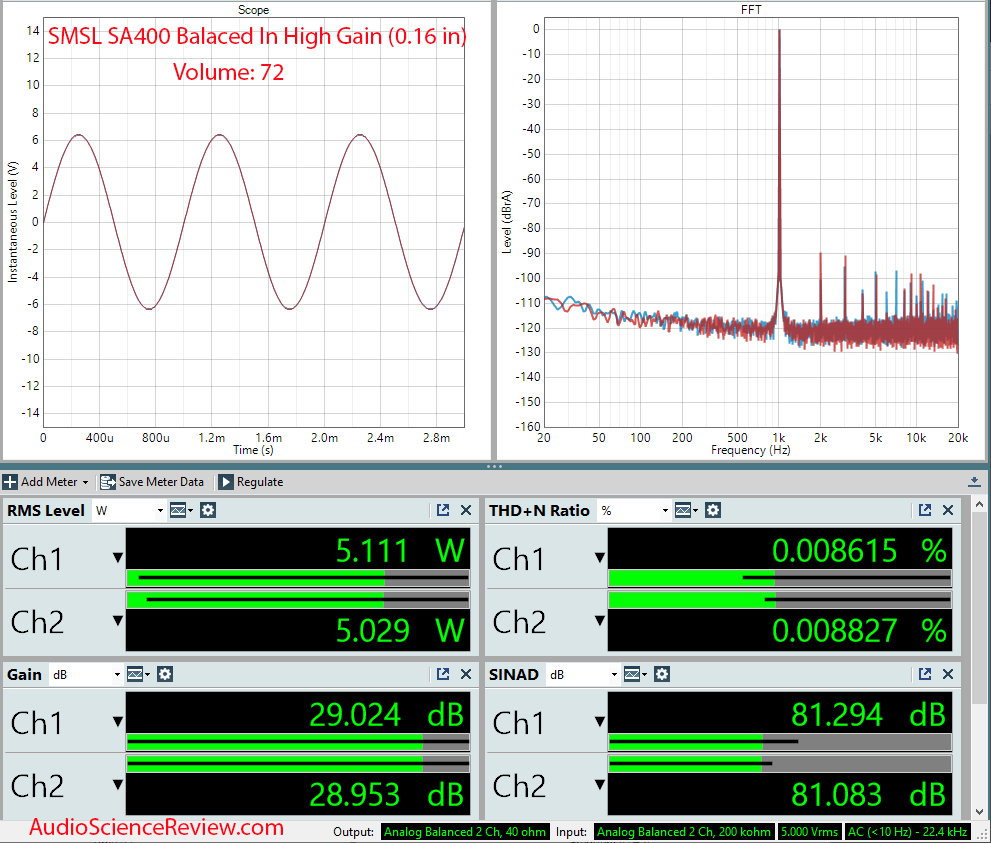 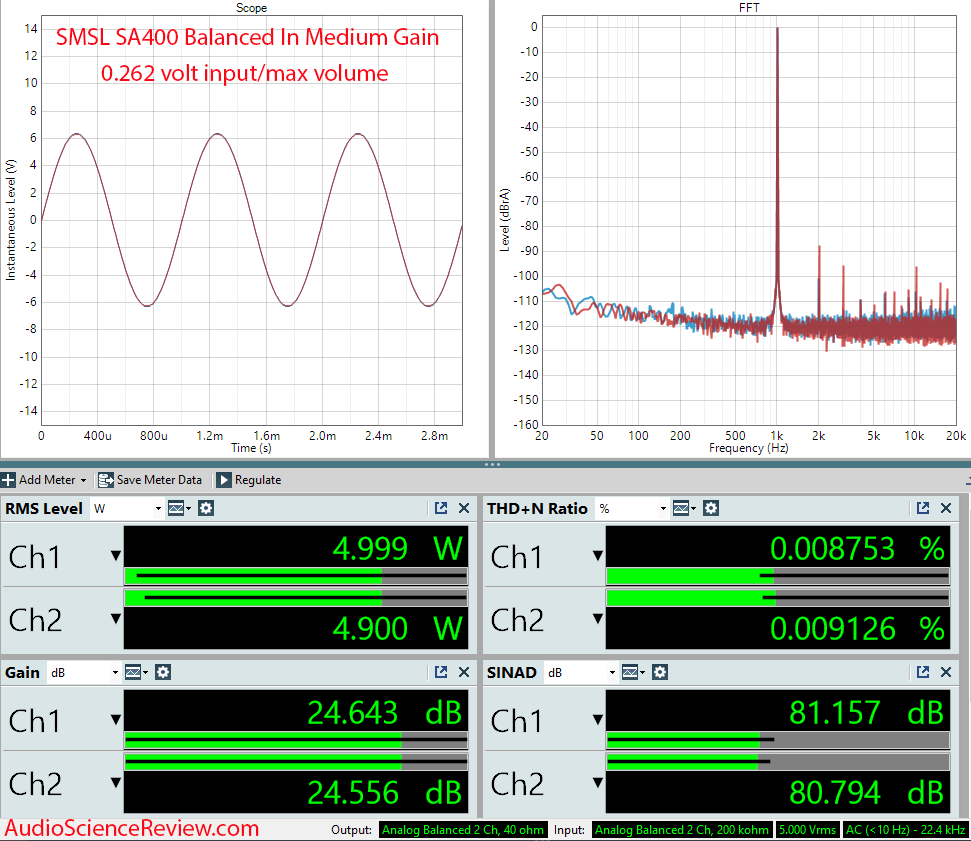 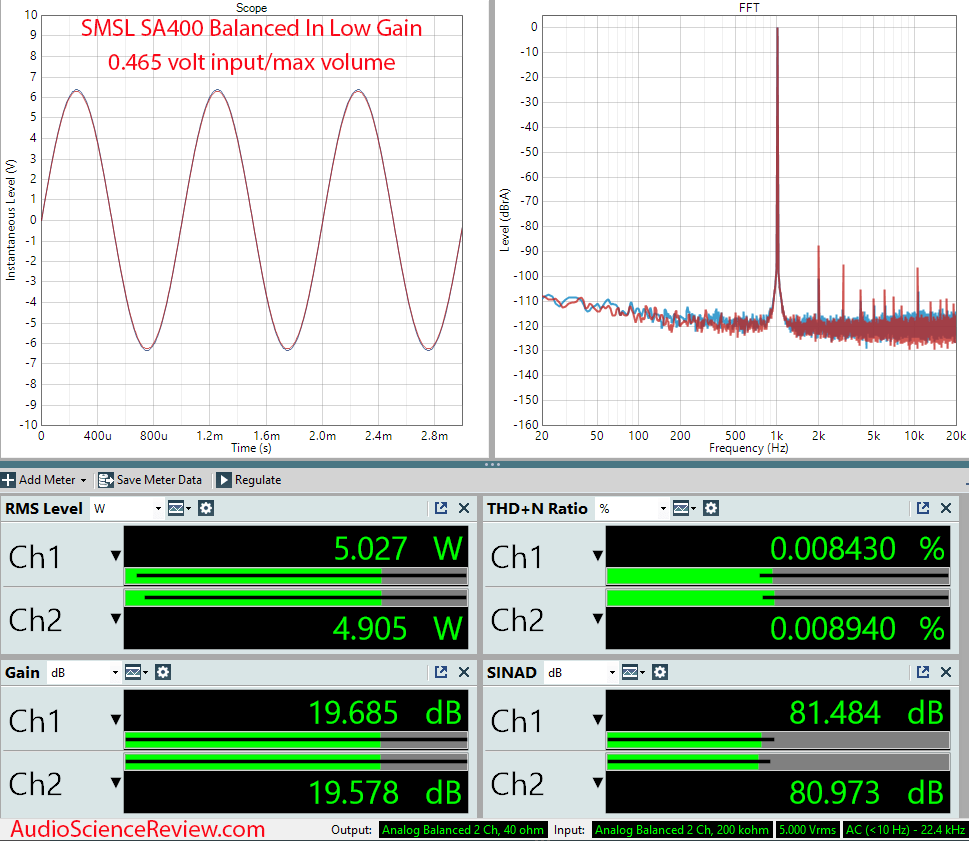 For the rest of my testing I used the adjusted high gain for better comparison to other integrated amps adjusted the same way.

Distortion is around -90 dB but what pulls down SINAD is the rather high noise floor. This causes the overall ranking to be just slightly above average:

Indeed we can see the noise issue in our SNR measurements:

State of the art amplifiers get 16 bits of dynamic range at 5 watts so we are two bits short here. Even at full power you are adding noise to a 16 bit signal (you want your amp to be cleaner than the noise in the source). This, and the fact that there is no bandwidth above 20 kHz nukes any idea of playing high-res content: 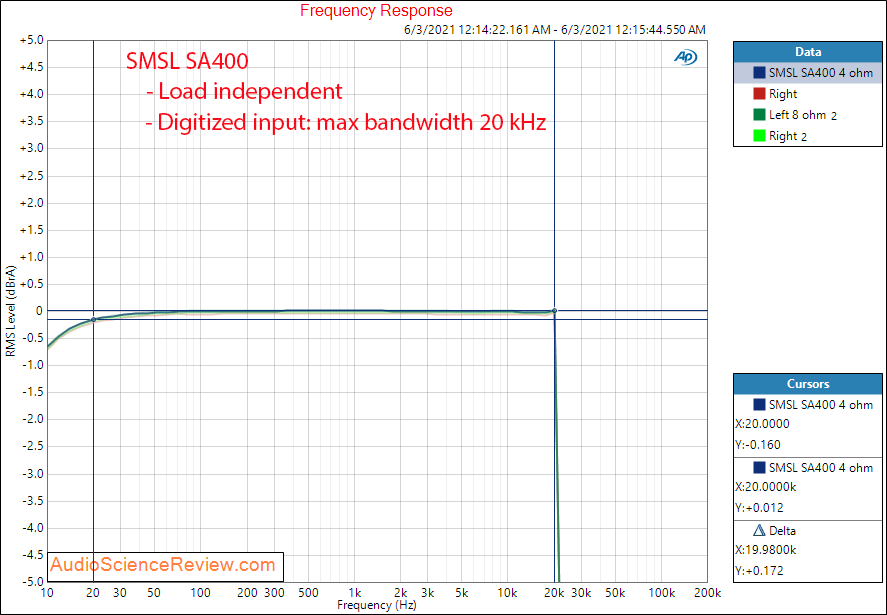 Sure would have been nice to use an ADC that was running at 48 kHz, not 44 as it seems to be. Use of the ADC is likely the reason the noise floor is higher than it would be otherwise. We have seen this in AV receivers which likewise digitize their analog inputs (unless you put them in "native" mode).

There is some very good news though. The feedback for the amplifier is taken post filtering which means it can compensate for the interaction between that filter and the load. The above measurement shows actually two graphs: one at 8 ohm and the other, 4. Both land on top of each other showing the amp doesn't care which is great. We only see this in the best class D amps like Hypex Ncore and Purifi.

Crosstalk was very good but unpredictable: 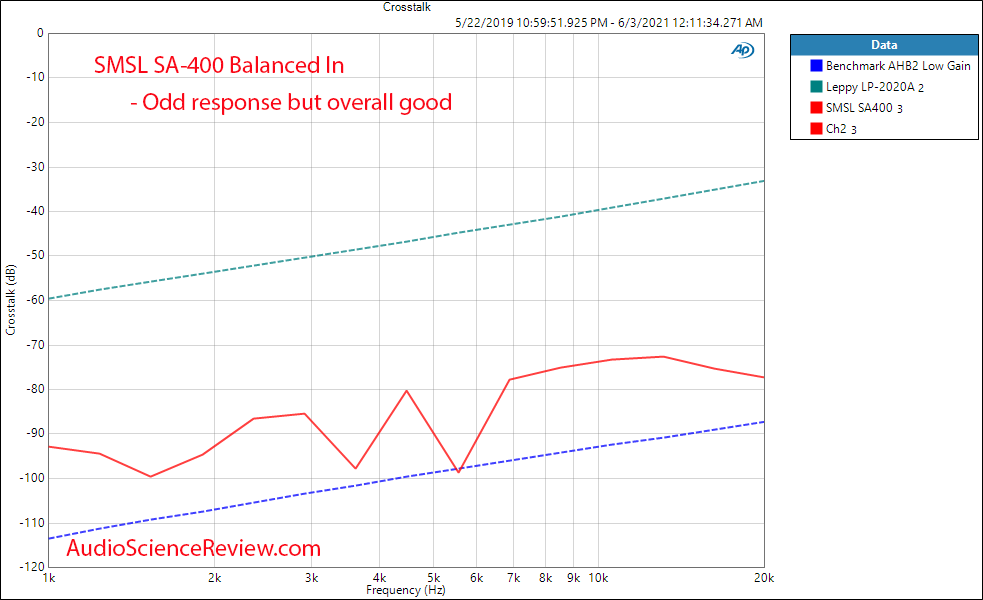 You can see the normal trend in the other two amps (dashed lines).

Most important test for any amplifier is how much power we have and how much distortion and noise so let's look at that at 4 ohms: 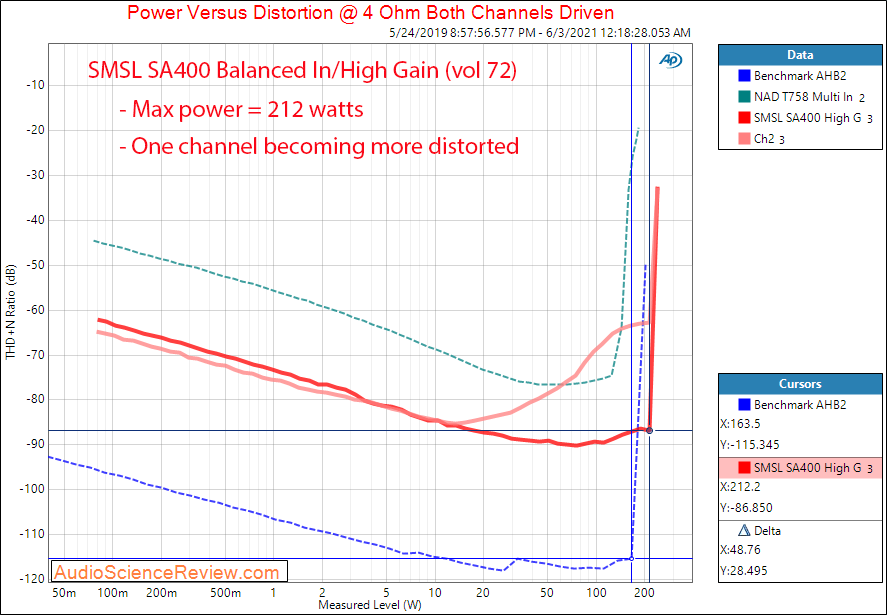 This is a powerful little amp, producing nearly 500 watts of power especially if you allow some peaking: 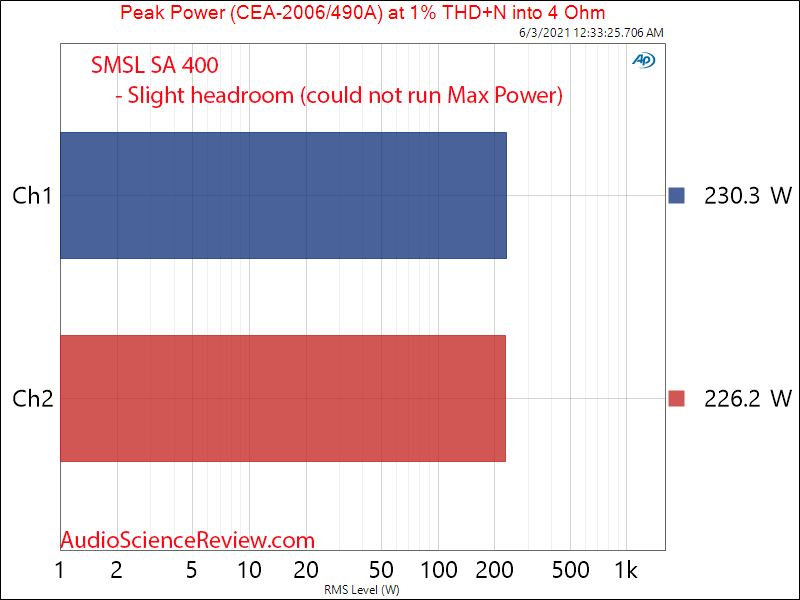 It complies with the spec which I think is 220 watts. Power naturally drops at 8 ohm but still healthy: 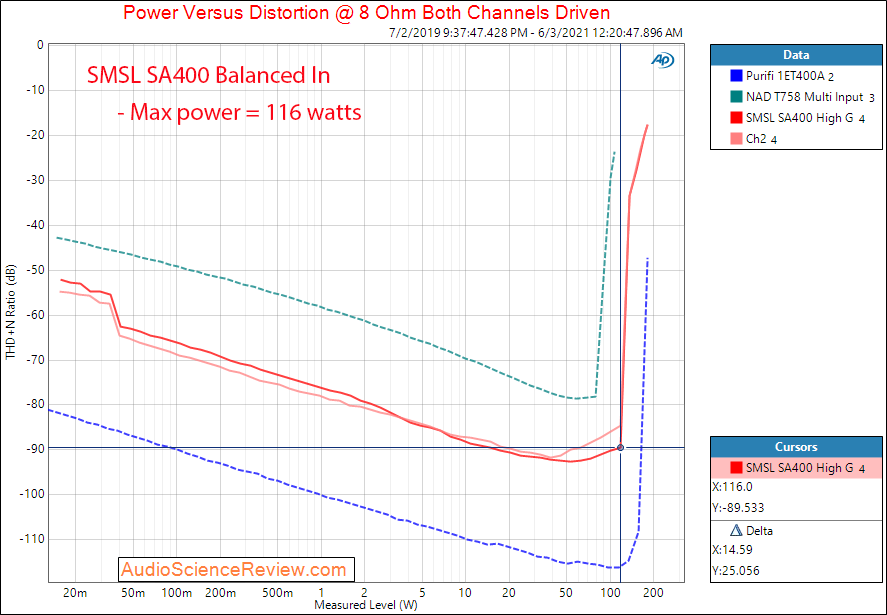 On our last test which is power versus distortion+noise at different frequencies. The output was quite unique: 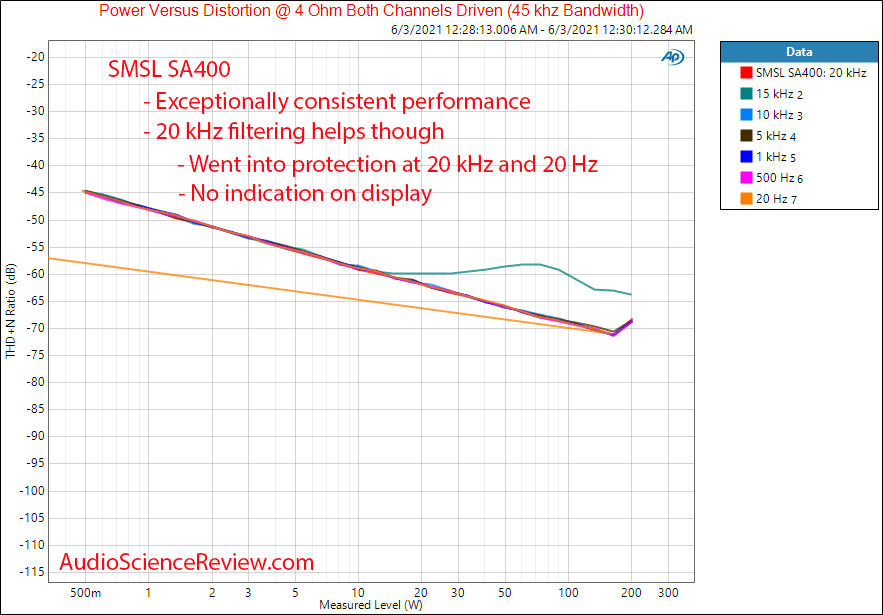 I have not seen a power amplifier show this level of frequency independence. Yes, having only 20 kHz bandwidth helps but still, even linear amplifiers don't produce such dead straight and sameness the SA400 is producing. This is quite excellent.

Note that the the amp went into protection at both 20 kHz and 20 Hz in this sweep. Alas there was no indication on the display. I had to power cycle the unit to get it to work again.

SMSL SA400 Amplifier Listening Tests
Even though I listen to every headphone amplifier, I only do so rarely for power amplifiers. I decided to start doing listening tests with this amplifier which was a good thing. I used an Infinity 253 speaker for my testing. Despite driving only one channel, the SA400 drove the R253 with extreme authority and clarity. Tons of detail and dynamics with little else to wish for. Putting my ears next to the tweeter I could hear a slight hiss but a few inches away it would disappear. The sound was so enjoyable I am still listening to it as I type this!

Conclusions
SMSL brings us an interesting and unique power amplifier to us. Love the load independence and small packaging plus tons of power. Performance drops to average levels in some areas but nothing that appears to be faulty or poorly engineered. I guess my one reservation is the cost. I am not sure how much of this is temporary given the world order with component shortages, high shipping costs, etc. but to me, the better retail target would be $499. The warranty is short at 1 year as well. For DACs and such I am not worried about warranty much but for amps I do like to see longer warranty.

Overall, I am going to put the SMSL SA400 on my recommended list. It delivers tons of power with no weak points.

Nice review @amirm . I wonder how this stacks up against some of the lower priced Hypex amplifiers based on the NC252 single board solution.
I've got soul, but I'm not a soldier...

That one channel being much more distorted in the 4ohm graph bothers me. Is it related to the issue found in the M500 and SU-9 being discussed in multiple threads right now? I agree with you that the price is waaaaay too high for this product, especially as it's from a company seemingly always putting out fires. (How many issues has the M500 had??? Not that companies like Topping are any better.) But, really, I may as well save up a little bit more and get something like a Buckeye Hypex amp for that money. As an SMSL product owner I am learning the value of peace of mind.
M

The coil whine is a concern. I would be concerned about buying one that may have this issue since @SHENZHENAUDIO has a poor reputation for after sales support. See this thread as an example:

franspambot said:
That one channel being much more distorted in the 4ohm graph bothers me.
Click to expand...

It is a common thing in amps. Usually one channer is farther from the power supply than the other and has some voltage/current modulation. While it is better to not have it, I don't loose a lot of sleep over it.
Amir
Founder, Audio Science Review
Founder, Madrona Digital
Review Thread Rules
My Technical Background
My YouTube Channel
OP

pozz said:
When you tried to run the max power test, did it shut down?
Click to expand...

It did but that is because the max power test jumps up and down until it zeros in on the max power. This doesn't work with amps that have quick protection systems like these chip amps tend to do. I could mess with it enough to get something but wasn't worth it.
Amir
Founder, Audio Science Review
Founder, Madrona Digital
Review Thread Rules
My Technical Background
My YouTube Channel
OP

Massimo said:
The coil whine is a concern. I would be concerned about buying one that may have this issue since @SHENZHENAUDIO has a poor reputation for after sales support. See this thread as an example:

SMSL or Shenzhenaudio? That thread is about the former I thought.

But yes, you may want to see some mileage on this amp before jumping in. I was going to put a notice in the review but forgot.
Amir
Founder, Audio Science Review
Founder, Madrona Digital
Review Thread Rules
My Technical Background
My YouTube Channel
Y

decent performance from a small and integrated amp for passives, though after lurking here I have been always appreciating the C/P ratios of the nice actives can do than going the combo route.
M

amirm said:
SMSL or Shenzhenaudio? That thread is about the former I thought.

But yes, you may want to see some mileage on this amp before jumping in. I was going to put a notice in the review but forgot.
Click to expand...

SMSL passes the buck to Shenzenaudio for support with their products. This message was posted in one of the threads discussing issues with SMSL's products:

They are sole agent for this model and will give a reasonable suggestions.

I'm not sure why they bother sending the above message since @SHENZHENAUDIO do not reply to emails.
Last edited: Jun 4, 2021

Agree on cost being too high for what it offers. Nice and compact though...
B

What is this Amp's DF? 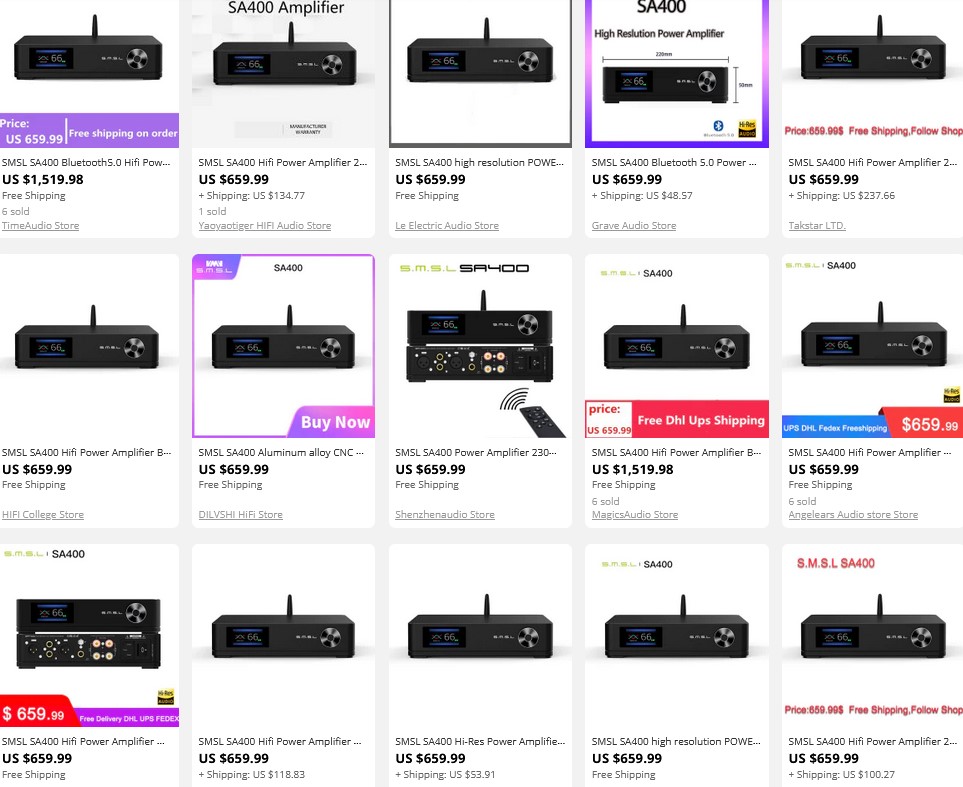 It is better to get the Hypex 252NC module based Audiophonics one over this I presume, if you aren't too much bothered about the one box solution aspect
An audio purist, not really an audiophile
P

So subwoofer output with low pass, is there a way to customize this low pass? at least the cutoff? If not what is it? digitized input calls for a great opportunity for dsp, and at this price point vs performance, it should allow for some, even if it’s just some basic EQ possibility.
OP

PeteL said:
So subwoofer output with low pass, is there a way to customize this low pass?
Click to expand...

I have not tested it. This is what they show:

The crosstalk/separation plot issue could be measurement. @amirm how does the AP handle that test? Left into right, right into left or does it sweep one channel only and measure the residual in the undriven channel vs frequency? The jumping up and down, suggests to me the undriven amplifier channel was muting periodically as it might with no signal. That would give a good crosstalk number until it unmuted again.
Last edited: Jun 4, 2021
Ricky Roma: I subscribe to the law of contrary public opinion... If everyone thinks one thing, then I say, bet the other way... 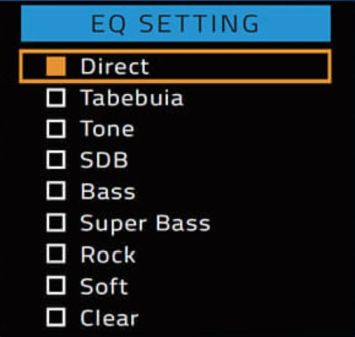 What is this Tabebuia EQ preset, is it suited for gardening?

As always, thumbs up to courageous company and reviewer for his persistent work!
You must log in or register to reply here.

Yesterday at 8:46 AM
amanieux
A