This is a review, detailed measurements and comparison of Schiit Magni 3+ and Heresy Headphone Amplifiers. It was kindly sent to me by the company. They both cost US $99 plus shipping from Schiit.

The Magni 3+ is a discrete amplifier implementation whereas the Heresy uses integrated circuits ("opamps") creating a race as to which is better.

Both units come in classic Schiit enclosure but the Heresy has burgundy accent with black top: 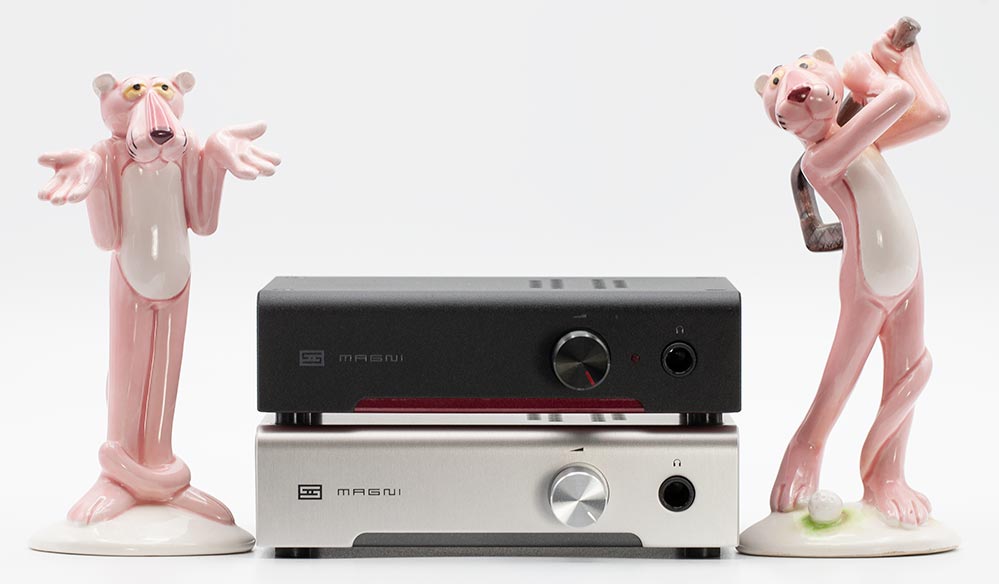 The Heresy has a nice red LED indicating if the power is on or not. The Magni 3+ does not. Why? Half the time I could not tell if the Magni 3+ was on or not.

Both units are powered by the classic AC transformer (15 volts AC @ 1.5 Amps) Schiit ships with a lot of its components. They get a bit warm and likely waste more power than the amps themselves. They do give the designer an advantage though over switching DC power supplies as both negative and positive "rails" (voltages) can be produced from AC. Whereas with DC, you have to have another switching converter to generate the negative rail.

The back panel is what you expect: 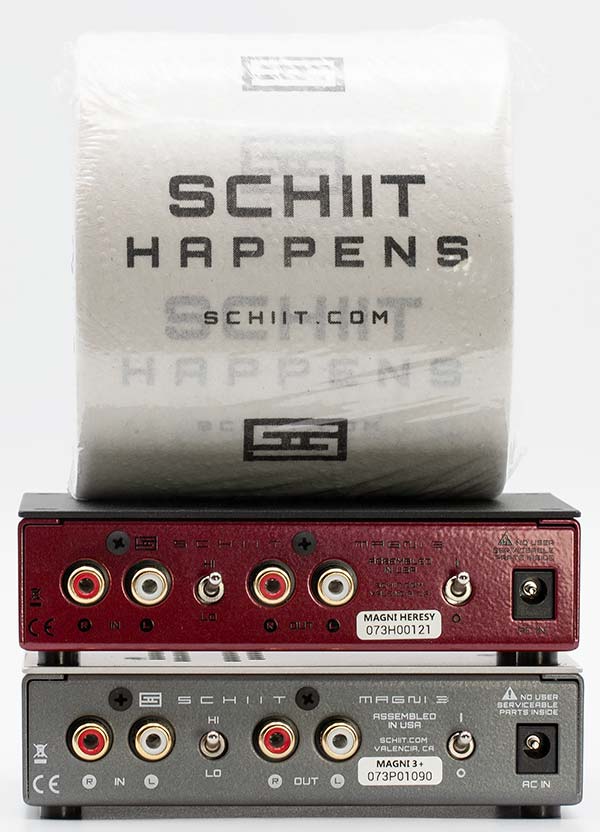 ​
Yes, the roll of toilet paper came in the box and gave me a good chuckle, putting me in good mood. Have not showed it to my wife yet as I am sure she will question me on what on earth I am testing that comes with toiler paper...

Headphone Amplifier Measurements
Let's start with our usual dashboard of feeding the amp 2 volts and get 2 volts out ("unity" gain): 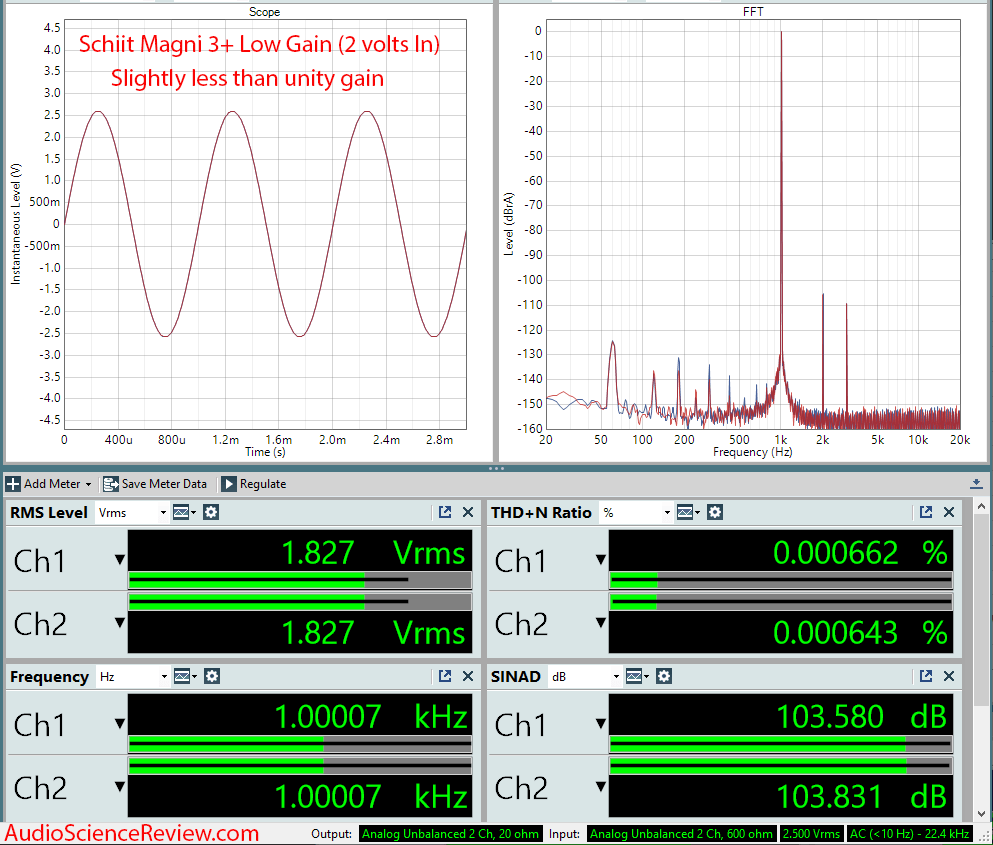 As you see, we are a bit shy of 2 volts output even though I had the volume at max. This means that the low gain mode is a bit less than 1:1. I tested it in high gain mode with 2 volt output and that dropped the SINAD (noise and distortion) to 99 dB. Wanted to test the same with Heresy but there, the high gain is much worse. So I decided to give the benefit to Magni 3+ and stay in low gain mode.

Here is the Heresy output: 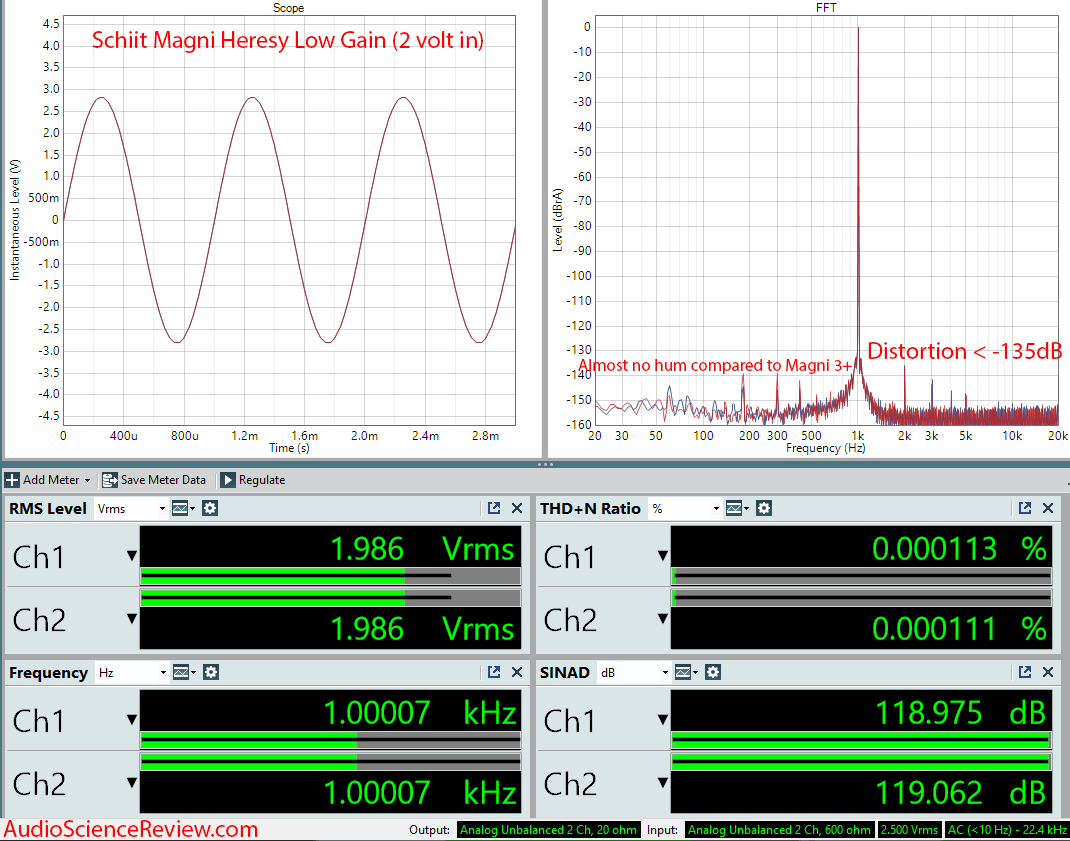 This is when I sit back with a big smile and thank myself for living in an era of such spectacular headphone performance. Distortion products are around -135 dB, which is about 20 dB better than we need for absolute transparency! Here is our ranking among their competitors: 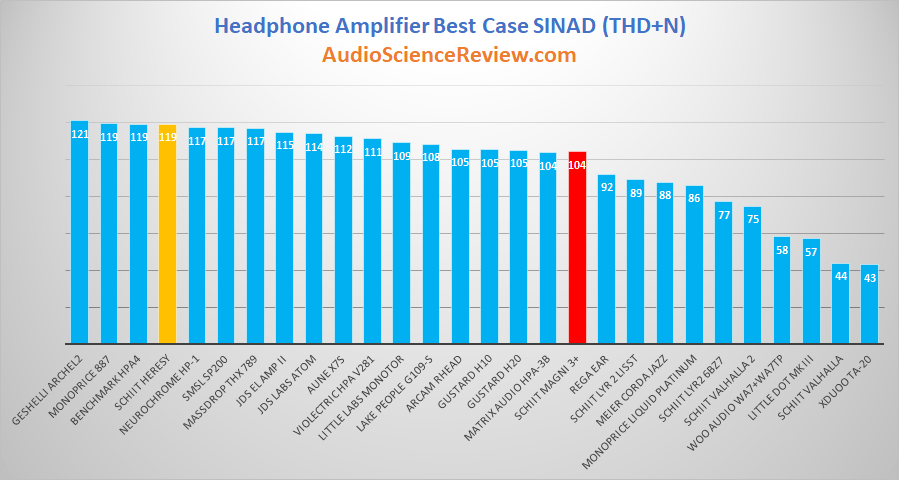 The Heresy pulls ahead of its only competitor: the JDS Labs Atom. The Magni 3+ hangs back a couple of grades.

Note that the Heresy has much better rejection of 60 Hz hum than the Magni 3+ does. A benefit of using IC opamps in Heresy versus discrete circuit in Magni 3+.

Signal to noise ratio at nominal 2 volts out is excellent on both:

We are talking 20 bits of dynamic range which matches the best DACs we have.

Dropping the output to just 50 millivolts to represent what level of dynamic range you get with sensitive IEMs and headphones we get a less impressive number: 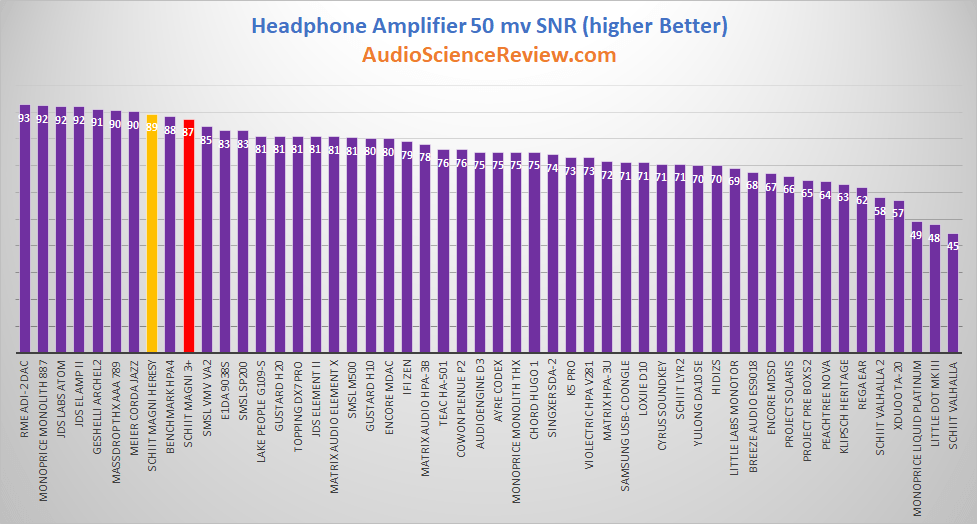 We are in upper tier of performance though so still good.

Frequency response is dead flat in both to 40 kHz which is great: 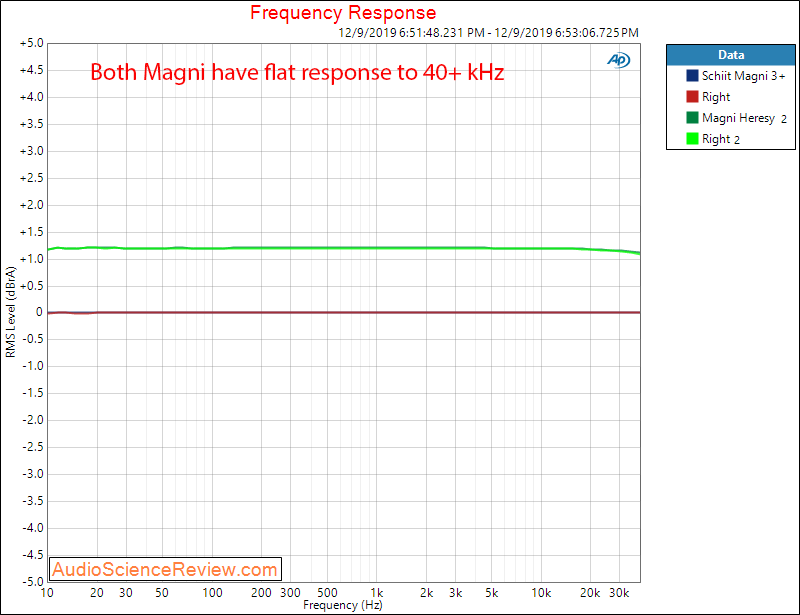 Key measurement is power into different loads so let's start with 300 ohm in low gain for both: 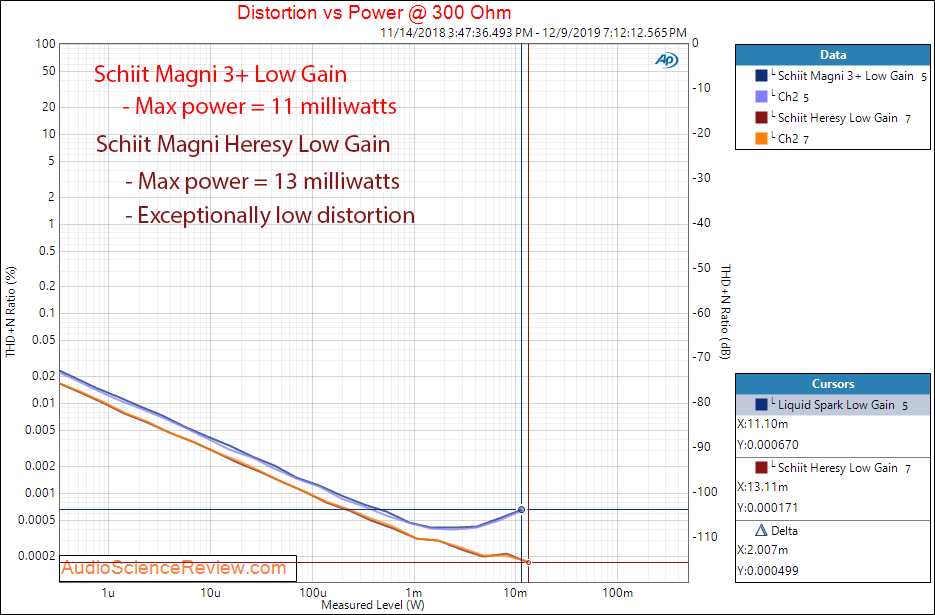 We can see that the Heresy is slightly quieter and at the limit has less distortion, pushing the limit in the measurement system. Neither clips in low gain so if you hear distortion, it is in your headphones.

Here is the high gain performance against JDS Labs Atom: 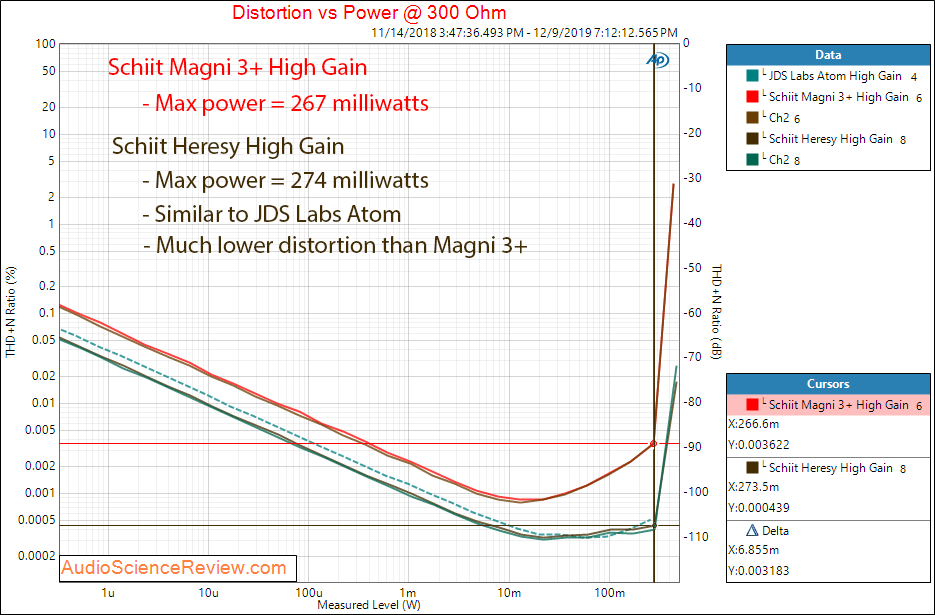 Power output is the same in all three amplifiers. The Atom and Heresy have much lower distortion though before they clip. At nearly 90 dB SINAD, Magni 3+ is doing well too. Just not int he same class.

Here is performance into 33 ohm in low gain: 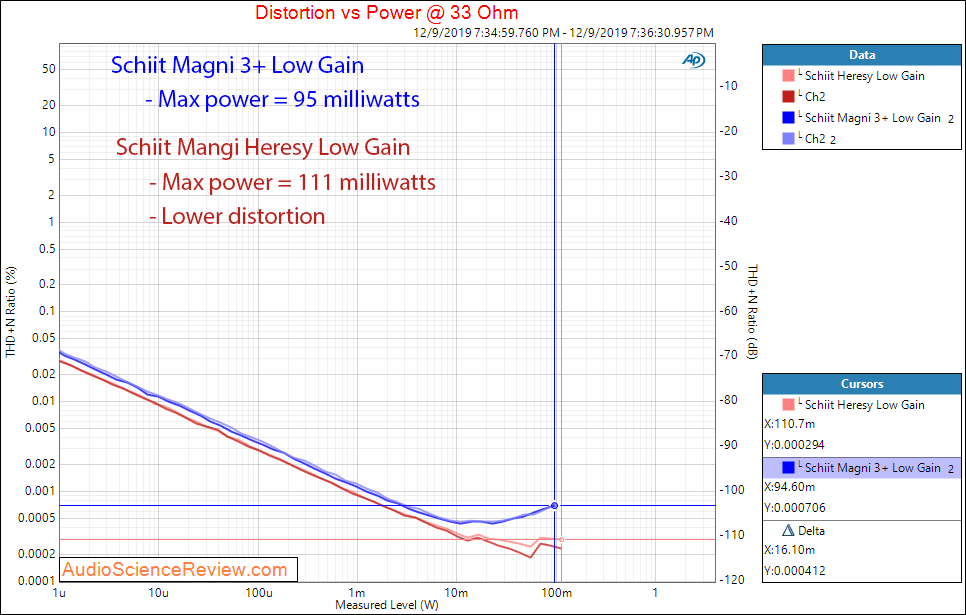 Very good performance from both of them with Heresy sporting lower distortion yet again. 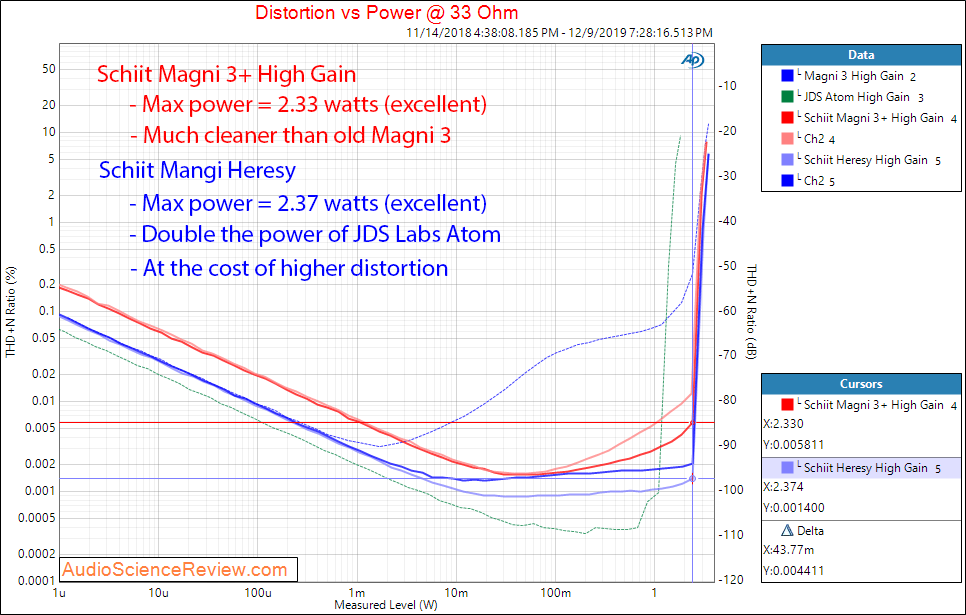 The Atom (dashed green) holds the title of lower noise and distortion. But both Magni amps leave it in the dust in power, producing nearly 2.4 watts.

Output impedance was identical and very low (good) on both at 1.3 ohm:

The channel imbalance was rather poor in Magni 3+ in the way it immediately showed such even at high volumes: 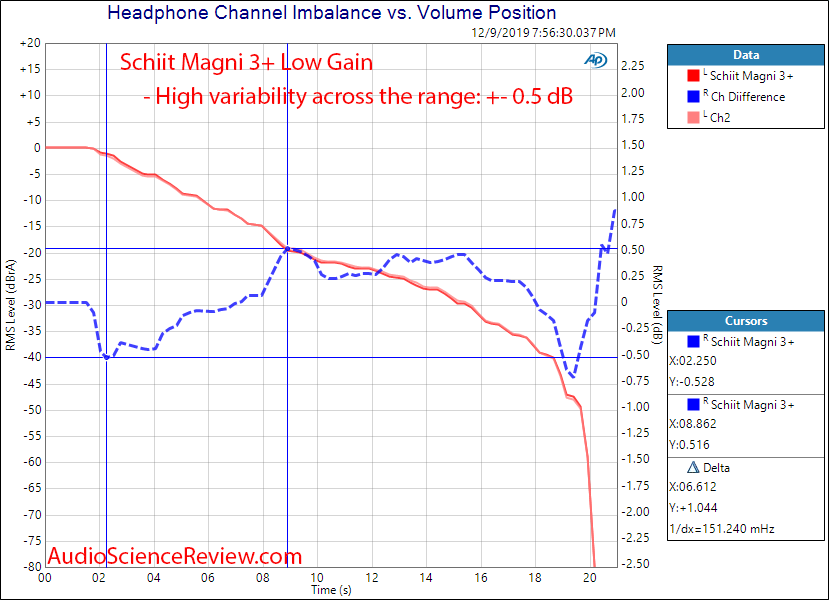 Your soundstage them may shift a bit depending on what the volume setting is. In my brief listening tests though, I did not notice this but more testing needs to be done.

I suspect the same volume control is also used in Heresy but here, it did a lot better: 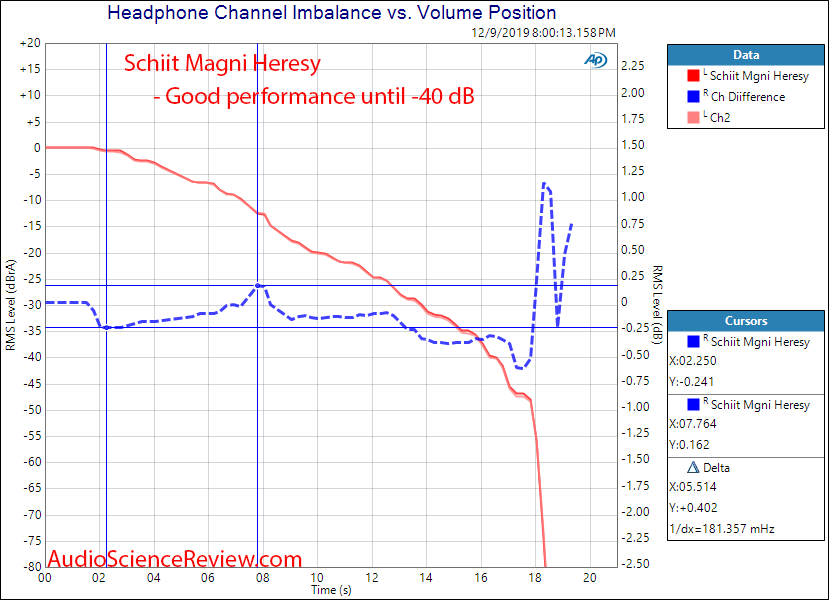 If the volume control is the same, and you have sensitive ears/headphones, then may have to sift through some units to get one with the right match.

This is one drawback of getting an external headphone amplifier versus a combo DAC and Headphone Amp. The latter almost always uses the volume control in the DAC and hence has near perfect channel match.

Headphone Listening Tests
I wanted to get this review out quickly so did not spend extensive amount of time listening. But did go through my set of headphone specific tracks and performed AB tests with levels matched. I fed both amps using my Topping DX3 Pro and used its volume control for adjustment.

I started with the Drop/MrSpeakers Ether CX 25 ohms. Both amps drove it to ear bleeding level in high gain. While I could hear increasing distortion, both were identical in this regard so I am assuming it is the headphone complaining. There was no sonic difference that I could detect.

So I switched to Sennheiser HD-650 headphones. Both amplifiers provided incredible amount of drive, producing stellar response in the form of bass, detail and dynamic range. I tried with a few tracks to tell the two amps apart but I could not. In more careful ABX scenario where I can focus on specific segments I might do better. But in real-time testing, the two amps are the same. Don't let anyone tell you otherwise!

Conclusions
Rarely do we get an opportunity to test two design philosophies in electronics. Yet here we are with two amps with near identical power rating and output impedance trying to impress us. The one with discrete implementation has the story that "it is harder to design so it must be better." The Opamp IC design's story is that an integrate circuit can be far more optimized than a discrete design. And its drawback of low voltage operation, doesn't apply to headphone amplifiers.

The conclusion is simple: the opamp design is superior in every regard to the discrete implementation. It has far less distortion, much less hum and lower noise floor in general. The Heresy also comes with a power LED which I like.

The Magni 3+ is also very competent amplifier and subjectively kept up with Heresy. But my question is why would you buy it? What are you going to do with that "story" of it being discrete? Print it on a sign and put it on your wall? Or sit back and enjoy music knowing that the Heresy provides absolute, provably transparent reproduction whereas the Magni 3+ is very close but may not be there.

My choice is clear. I am happy to give a very strong recommendation to Schiit Magni Heresy. It has exemplary performance coupled with a solid metal box.

Personally though I would not use it due to volume control position. Make sure you are OK with that before committing to it.

This is a union town which the panthers belong to. I had no idea that there was a contractual restriction against using two panthers in the same picture. So I am facing a fine and appreciate donations to pay for that and/or fight the infraction using: https://www.audiosciencereview.com/forum/index.php?threads/how-to-support-audio-science-review.8150/
Last edited: Dec 15, 2019
Amir
Founder, Audio Science Review
Founder, Madrona Digital
Contributing Editor, Widescreen Review Magazine
Click for My Technical Background
My YouTube Channel
L

So, wait... are we getting performance near the THX 789 for 99 usd? Or I misinterpreted the numbers?

Thanks for another great review, chief!

Let's hope that Schiit will leverage this success of Heresy and will also develop & release a new DAC+headphone amp combo with Topping DX7 Pro level of DAC performance and Heresy level of amp performance. If $700 or less (and Topping level of craftsmanship), I'd order it the same day your review of it comes out. (although upon further reflection I’d most certainly prefer my next DAC+ headphone amp combo to be shipped without toilet paper and having a different, more seemly brand name than this).

By the way, I thought you said that you'd switch from DX3 Pro to DX7 Pro, what kept you from switching?
Last edited: Dec 10, 2019
a guy in [a recurring] search for the perfect AVR, floorstanding speakers, subs & over-ear headphones

Thanks for the review and the measurements.

What is the dashed blue line that goes bit crazy in 33ohms distortion vs power?
C

Is it too much to ask the IMD vs power and multi-tone test too?

makmeksam said:
Thanks for the review and the measurements.

What is the dashed blue line that goes bit crazy in 33ohms distortion vs power?
Click to expand...

Oh look schiit taking measurements seriously, good to see improvements from their side. Now i wonder how the subjectivist people would perceive this performance change in their listening

amirm said:
It was kindly sent to me by the company.
Click to expand...

:-O
Happy to read this, it's a positive outcome.
R

Vovgan said:
By the way, I thought you said that you'd switch from DX3 Pro to DX7 Pro, what kept you from switching?
Click to expand...

I gave the DX7 Pro to my son. The DX3 Pro is doing the job so for now, I am staying with it. Longer term do want to replace it with something that has balanced out for testing.
Amir
Founder, Audio Science Review
Founder, Madrona Digital
Contributing Editor, Widescreen Review Magazine
Click for My Technical Background
My YouTube Channel
OP

A big take-away from this is that discrete implementation need not suck. So often we see performance of a good DAC ruined by discrete stage. Likely with low feedback.
Amir
Founder, Audio Science Review
Founder, Madrona Digital
Contributing Editor, Widescreen Review Magazine
Click for My Technical Background
My YouTube Channel 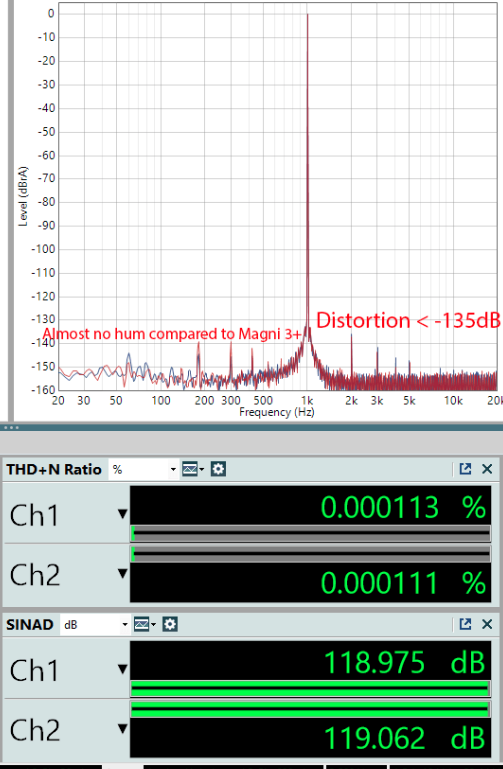 So, Schiit has started sending you stuffs now, huh? Good Schiit.
"It is the perceived sound quality that matters not the measured quality – unless that measurement has been scaled and correlated to subjective perception through valid psychoacoustic tests." Earl Geddes

When I saw the Heresy's SINAD realizing there was still more to the review, but I couldn't help and be like this for a moment before calming down...

Distortion vs frequency with 32ohm?

Did we forget this? 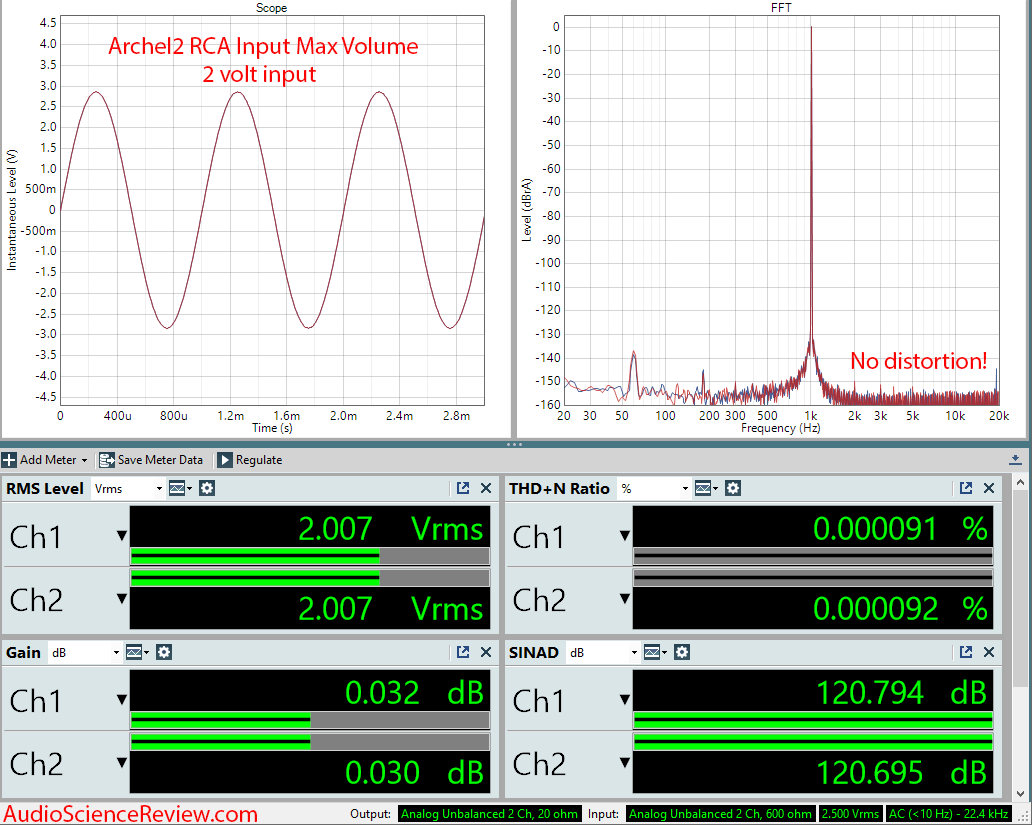 Low distortion without load is easy.

amirm said:
This is one drawback of getting an external headphone amplifier versus a combo DAC and Headphone Amp. The latter almost always uses the volume control in the DAC and hence has near perfect channel match.
Click to expand...

If you drive this with an LG G7/V20 etc. you should be able to correct any imbalance using the LG Quad DAC channel balance virtual dials..
OP

Cahudson42 said:
If you drive this with an LG G7/V20 etc. you should be able to correct any imbalance using the LG Quad DAC channel balance virtual dials..
Click to expand...

If you look at the graph, you will see that the imbalance is variable based on position of the volume control. Is it not constant. You could set the volume to max and then change the input level.
Amir
Founder, Audio Science Review
Founder, Madrona Digital
Contributing Editor, Widescreen Review Magazine
Click for My Technical Background
My YouTube Channel
You must log in or register to reply here.

I have a UMC22, is the headphone output powerful enough to run a pair of 250ohm headphones?

D
Help me choose a DAC/AMP under 200 USD