This is a review and detailed measurements of the Roland UA-22 Duo-Capture Ex USB Audio Interface (DAC/ADC). I bought it in the year 2015 as a small interface to make 2-channel microphone recordings in the field. The Duo-Capture costed about US $140.

Duo-Capture has 2 balanced inputs, XLR/TRS combo. XLR serves as microphone input with switchable 48Vdc phantom power. Its max. input voltage is about 0.8Vrms for the lowest gain setting. The TRS input has max. input voltage about 6Vrms. Both XLR and TRS inputs go through amplifiers with gain controlled by the analog pot up to 46dB. There are 2 analog outputs in the rear panel provided with TRS connectors. They are pseudo-balanced, that means while OUT+ (tip) is a real signal output with output impedance of 1kohm, the OUT- (ring) is connected to GND (sleeve) via a 1kohm resistor. There is also a TRS headphone output on the front panel.

The unit may be power supplied from USB, from AC wall adapter or from 3 pcs of AA 1.5V batteries. When operated from batteries (TAB switch position rear panel), the sampling frequency is fixed to 44.1 kHz. Otherwise there is a choice of 44.1/48kHz sampling and 16/24bit resolution. Drivers are provided including ASIO driver.

The unit is nicely built in a metal, well shielded case, please see the following photos. SW installation was easy just following step-by-step instructions of the user manual. It is running for me under Windows XP and Windows 8.1. 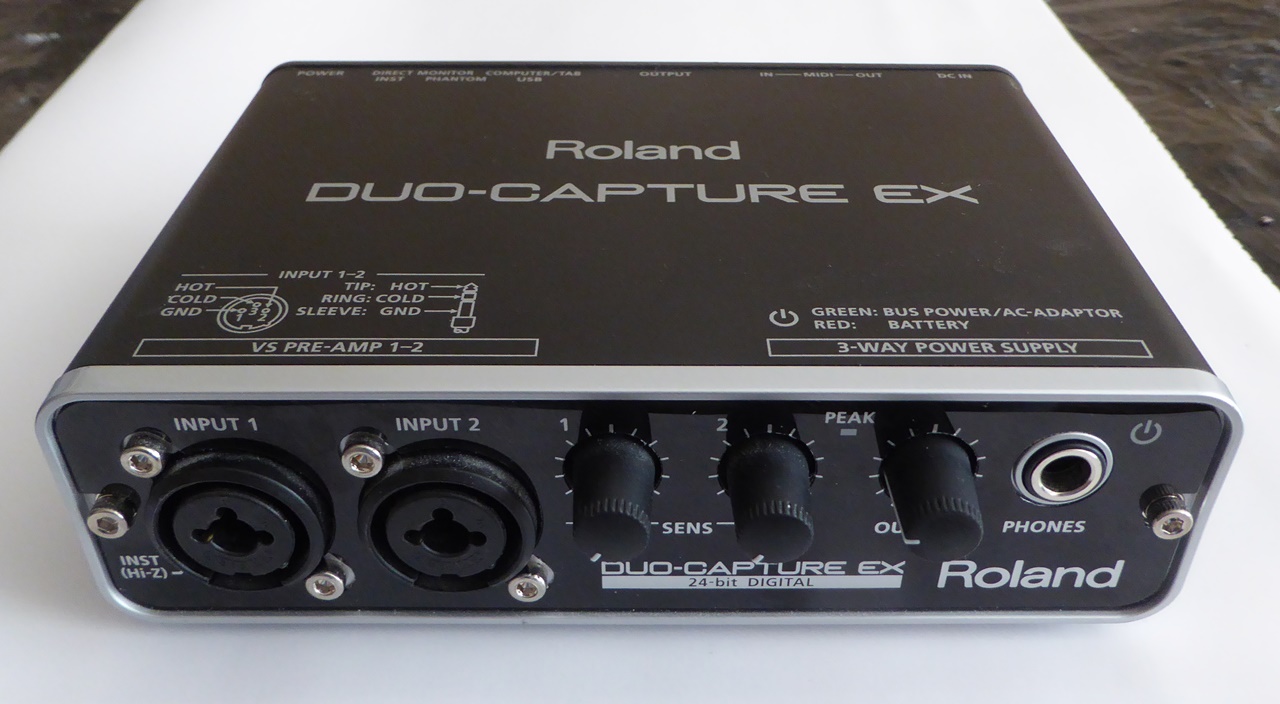 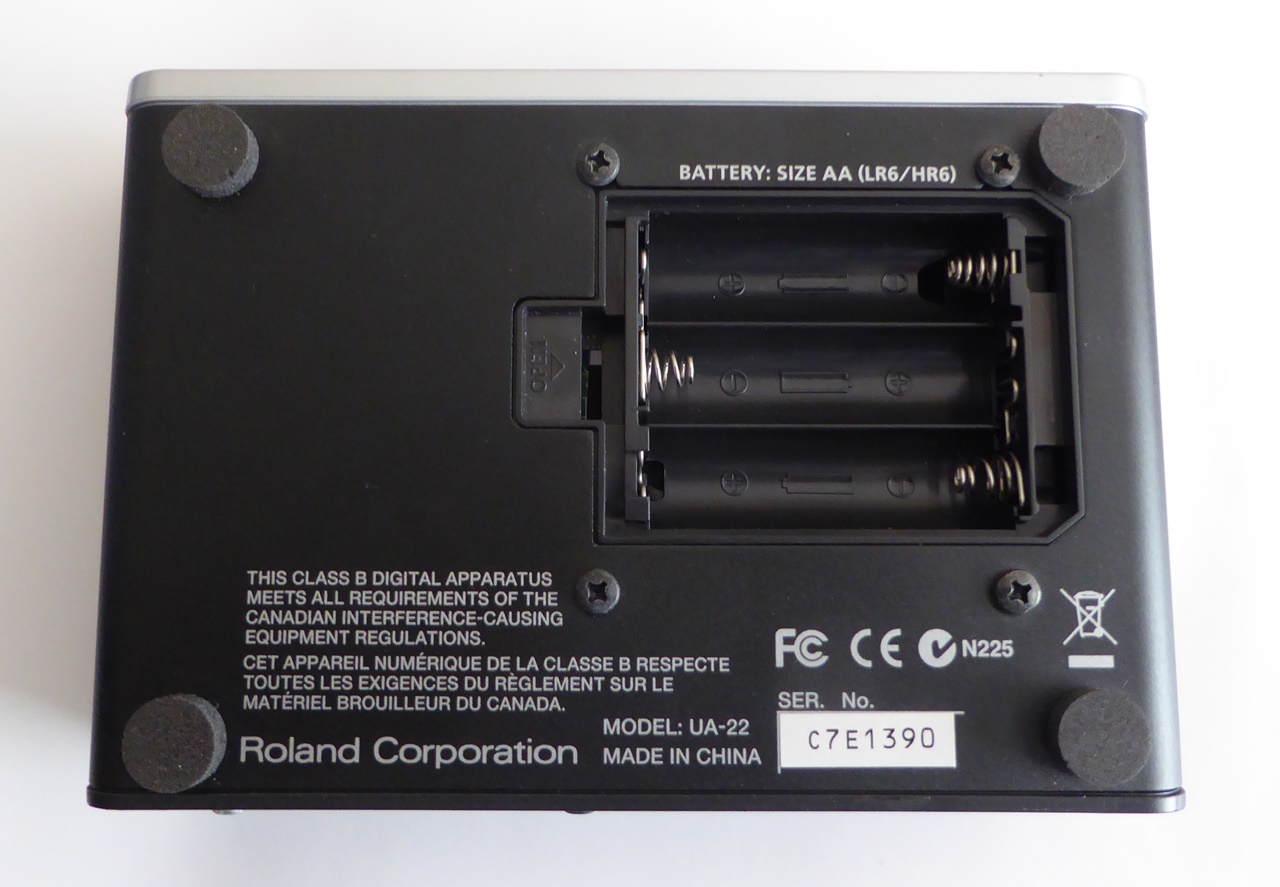 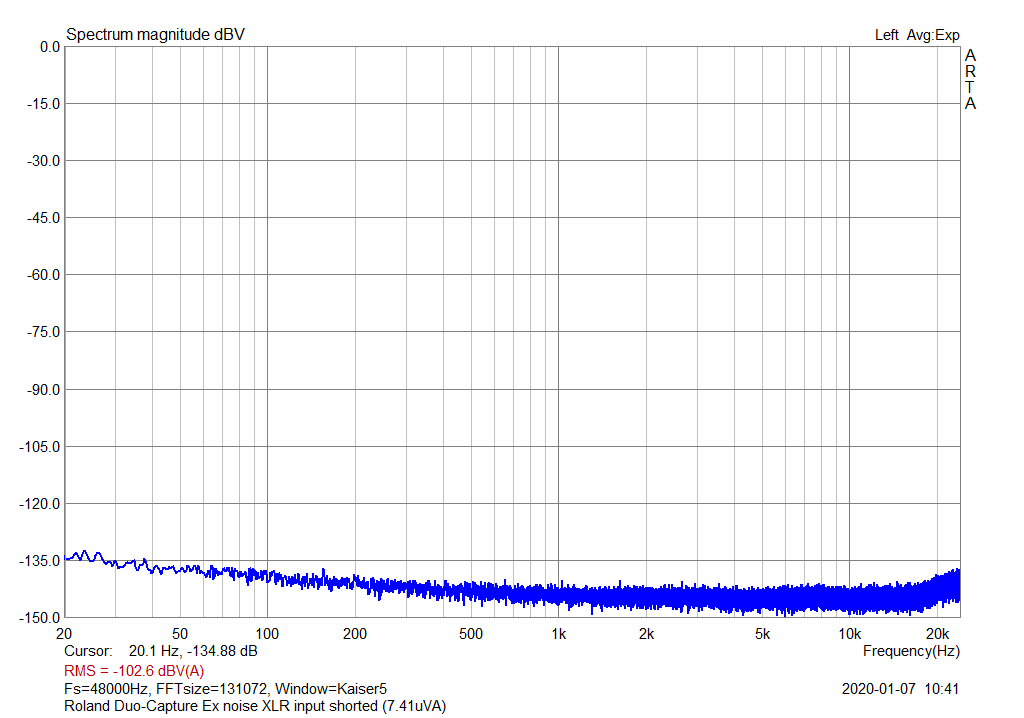 Noise was measured with XLR input shorted, i.e. no loopback.

Noise on XLR input is -102.6dBV(A), which is 7.41uV A weighted. Not so good, but the noise bottom is very clean. This is a very strong point of this card, as we shall see later. Noise re FS is -100.5dBFS A-weighted, which sets the maximum available dynamic range in 24-bit resolution. 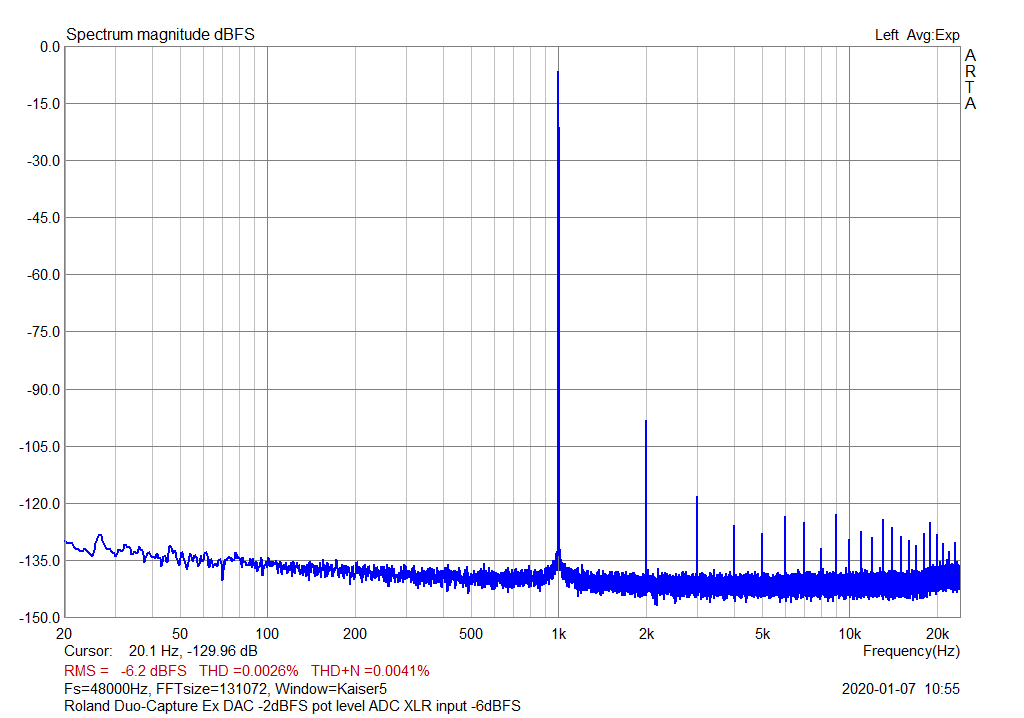 Further measurement is at -0.4dBFS 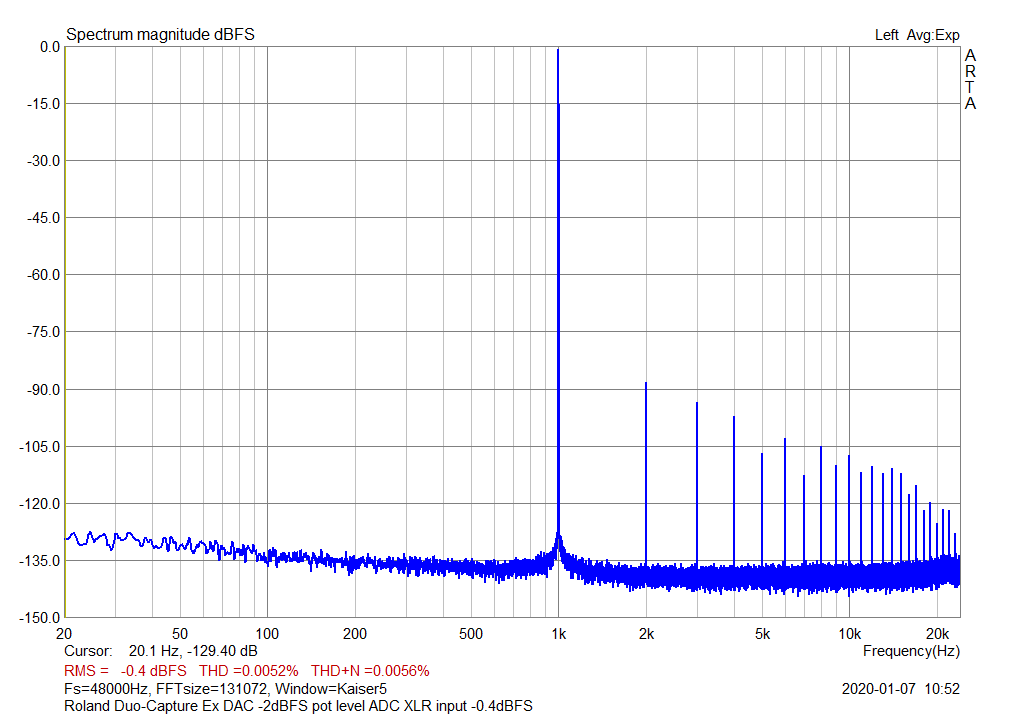 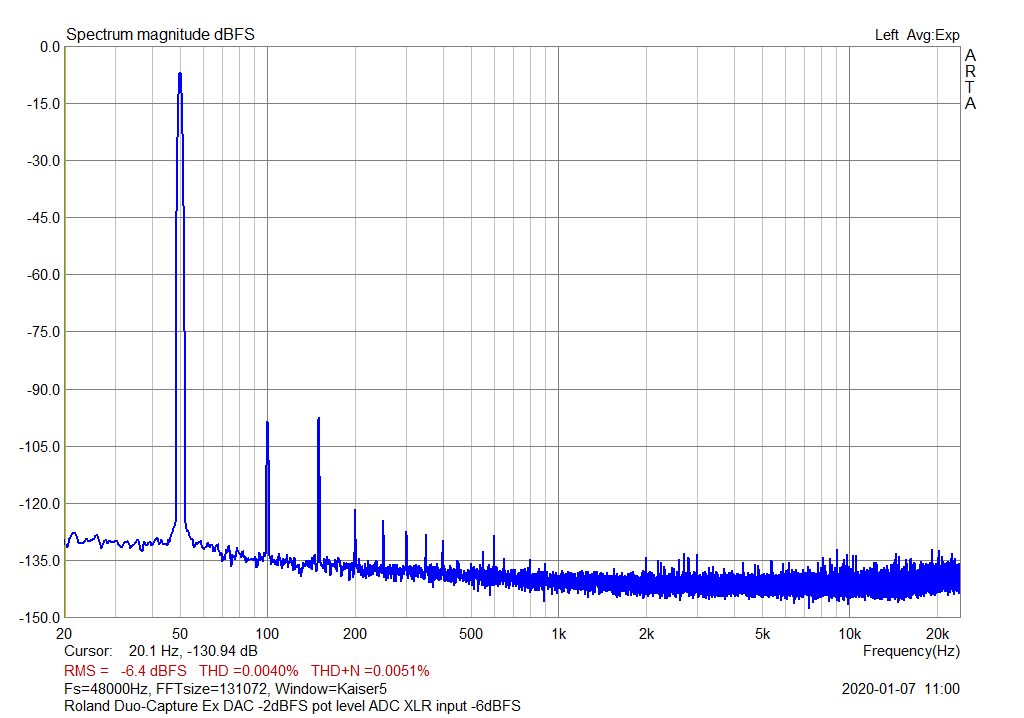 THD = 0.004%, THD+N = 0.0051%. Something is worsening LF linearity and we shall find later that it is the DAC, not ADC. My guess is that output coupling capacitors are adding non-linearity. The higher the output level, the higher the LF distorion. 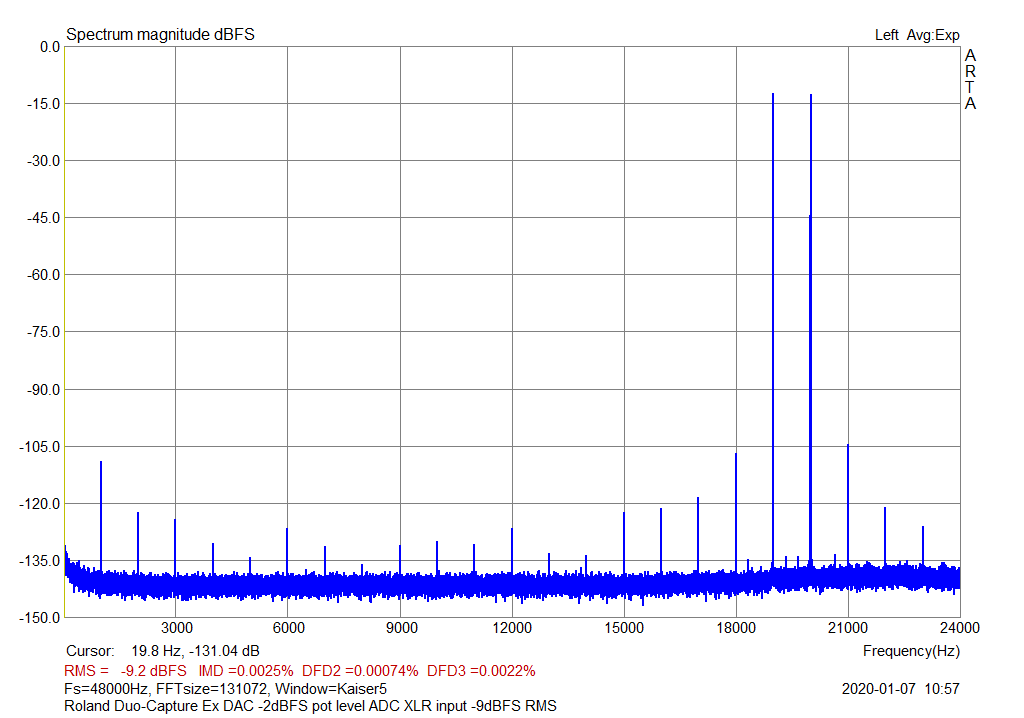 The result is not fantastic, but is not that bad. I do not like so many high order distortion components near the noise bottom. 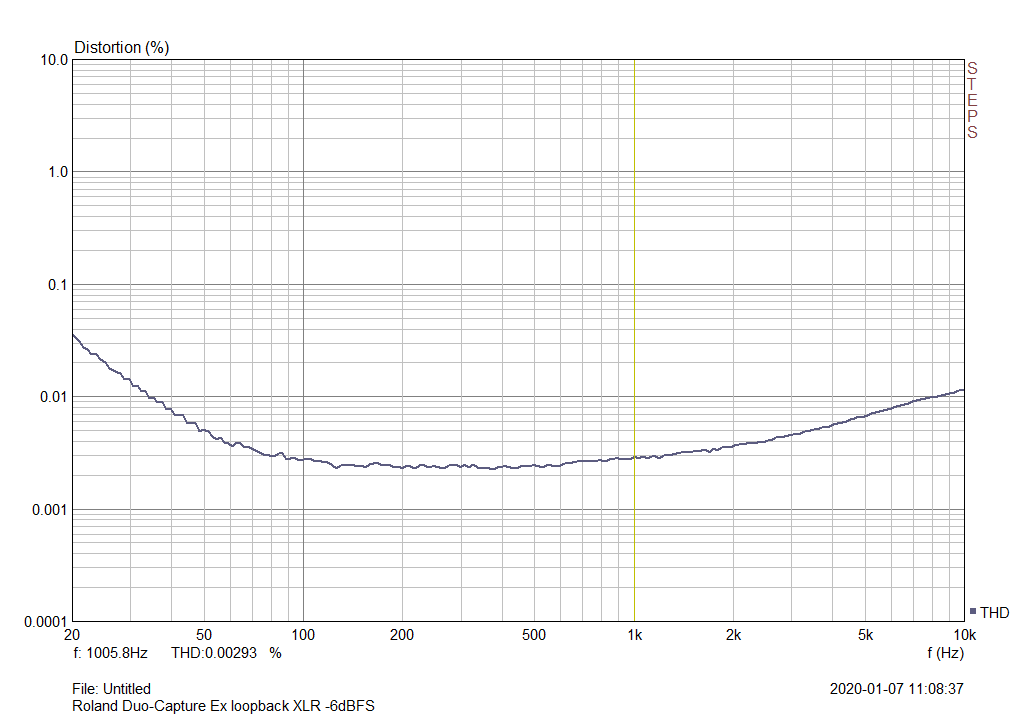 Please see increasing distortion at both ends of the spectrum, especially the LF distortion as mentioned earlier. Worth mentioning that DAC output is only pseudo-balanced, it is not signal-balanced, so it does not utilize possible even harmonics cancellation in the ADC balanced input amplifier. We shall see later.

THD vs. amplitude at 1kHz 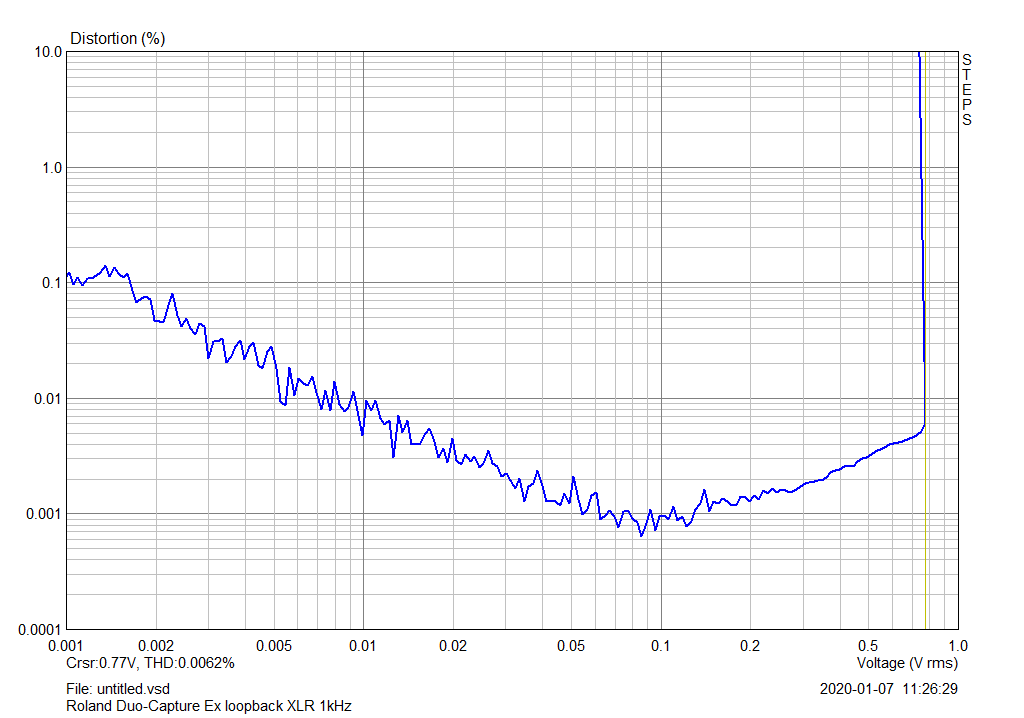 CA DM+ is far much better DAC than that used in Duo-Capture Ex. So the DM+ was used as a source for the following set of measurements. 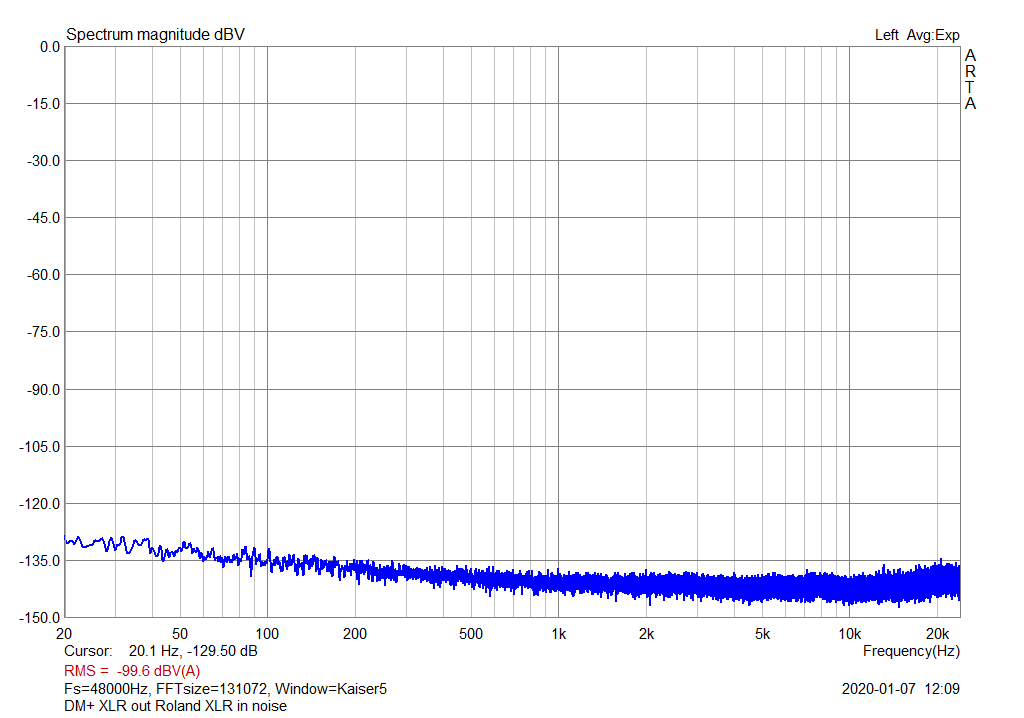 As a result, we have -99.6dBV(A) of audio path noise, 10.47uV A-weighted. Not much worse than Duo-Capture Ex input shorted. Please note that the noise bottom is clean, without any PSU lines visible. Both components are excellent in this regard. 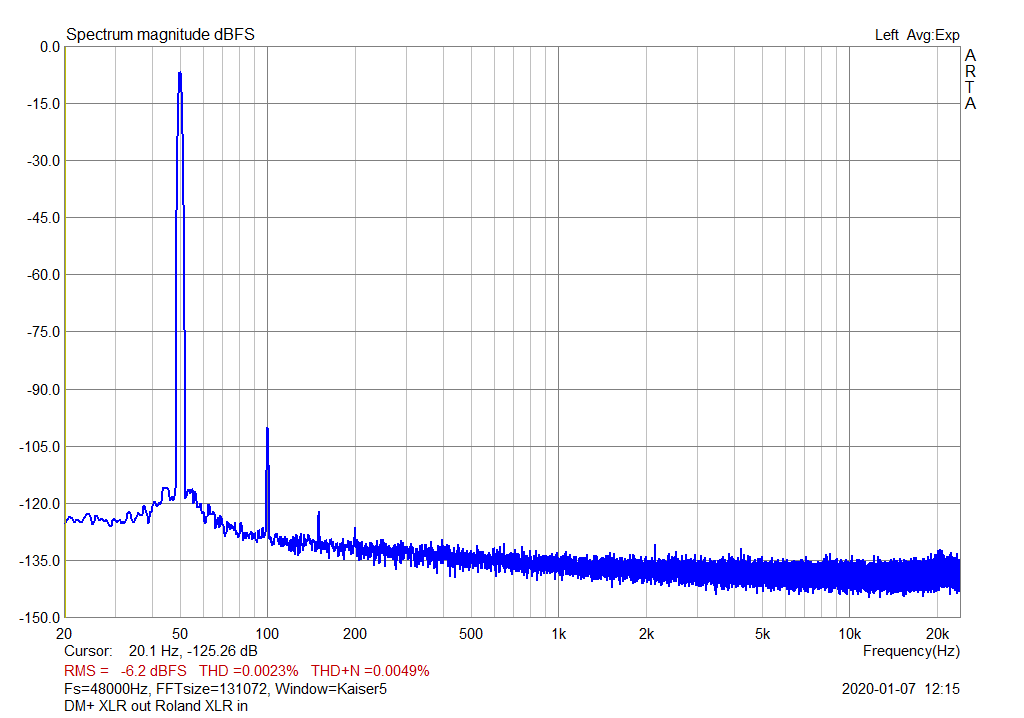 Now we can see that the excessive LF distortion has disappeared, so the problem in loopback measurement was clearly at the DAC side of the Duo-Capture Ex.

THD vs. frequency at -6dBFS 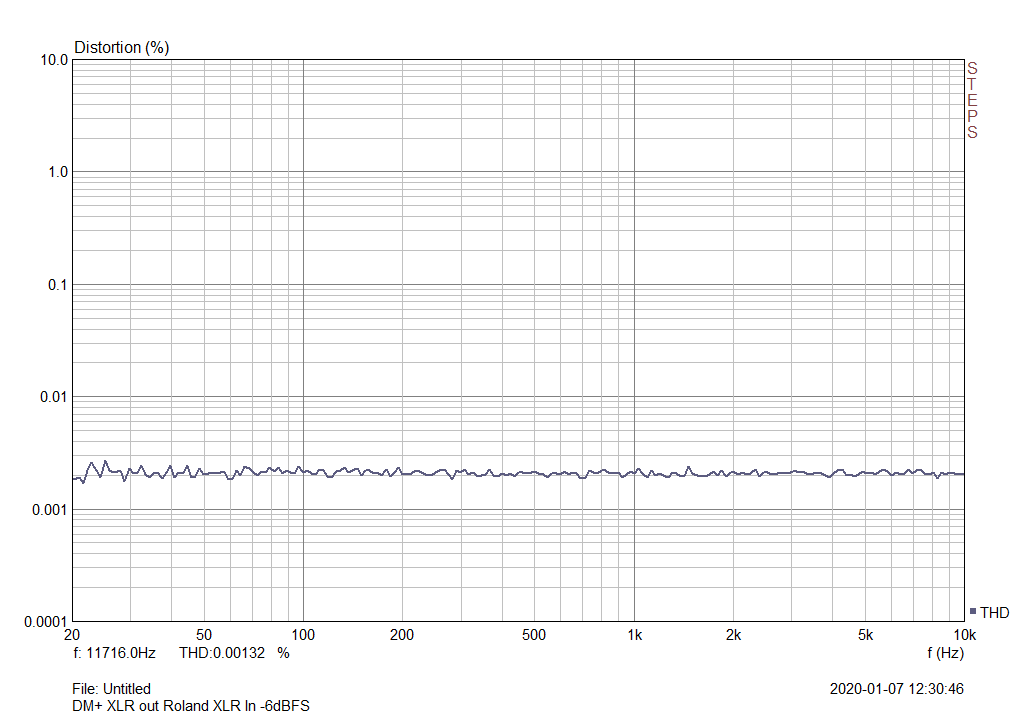 This measurement just confirms that DAC side of Duo-Capture Ex was responsible for excessive non-linearity. Now the result is frequency independent and reflect just ADC parameters of the Duo-Capture Ex. DM+ is much below 0.001% in this setting. 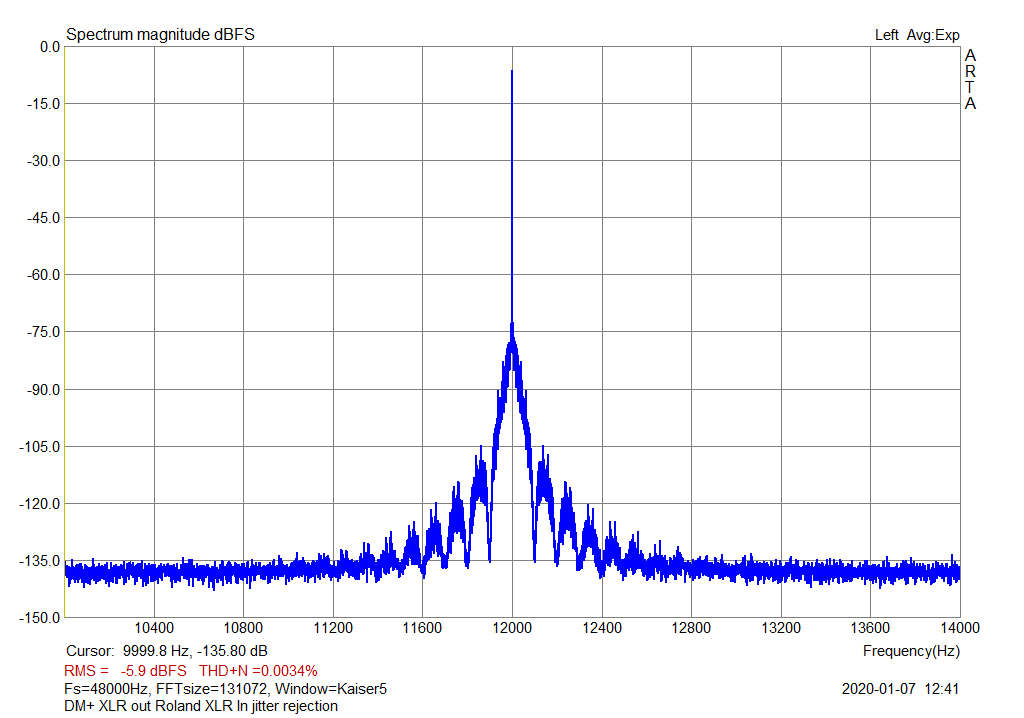 ADC jitter, whatever is the reason, is the pain of the Duo-Capture Ex. The result is very poor. DM+ is proven to have negligible jitter, in another tests, including mine. This is definitely Duo-Capture Ex problem which was not disclosed by its loopback measurements.

Roland UA-22 Duo-Capture Ex does not have fantastic parameters. But, it has well built metal case, it has very good immunity against interfering EM fields and improper wiring (due to its balanced inputs), it is light-weighted, it may be battery operated and as such is a very good small tool for quick recordings in the field. It gives nice results with electret, phantom powered microphones. It is also fine for speaker measurements, including distortion measurements, which I made hundreds with this unit. AD part is better than the DA part, with only issue, the jitter, which is probably not so important if we measure speakers.
pmacura.cz/audiopage.html
OP

pma said:
built in a metal, well shielded case,
Click to expand...
Oh, I made a mistake . The box is made of plastic, though I had a feeling it was metal. However, the immunity to EM fields is very good. 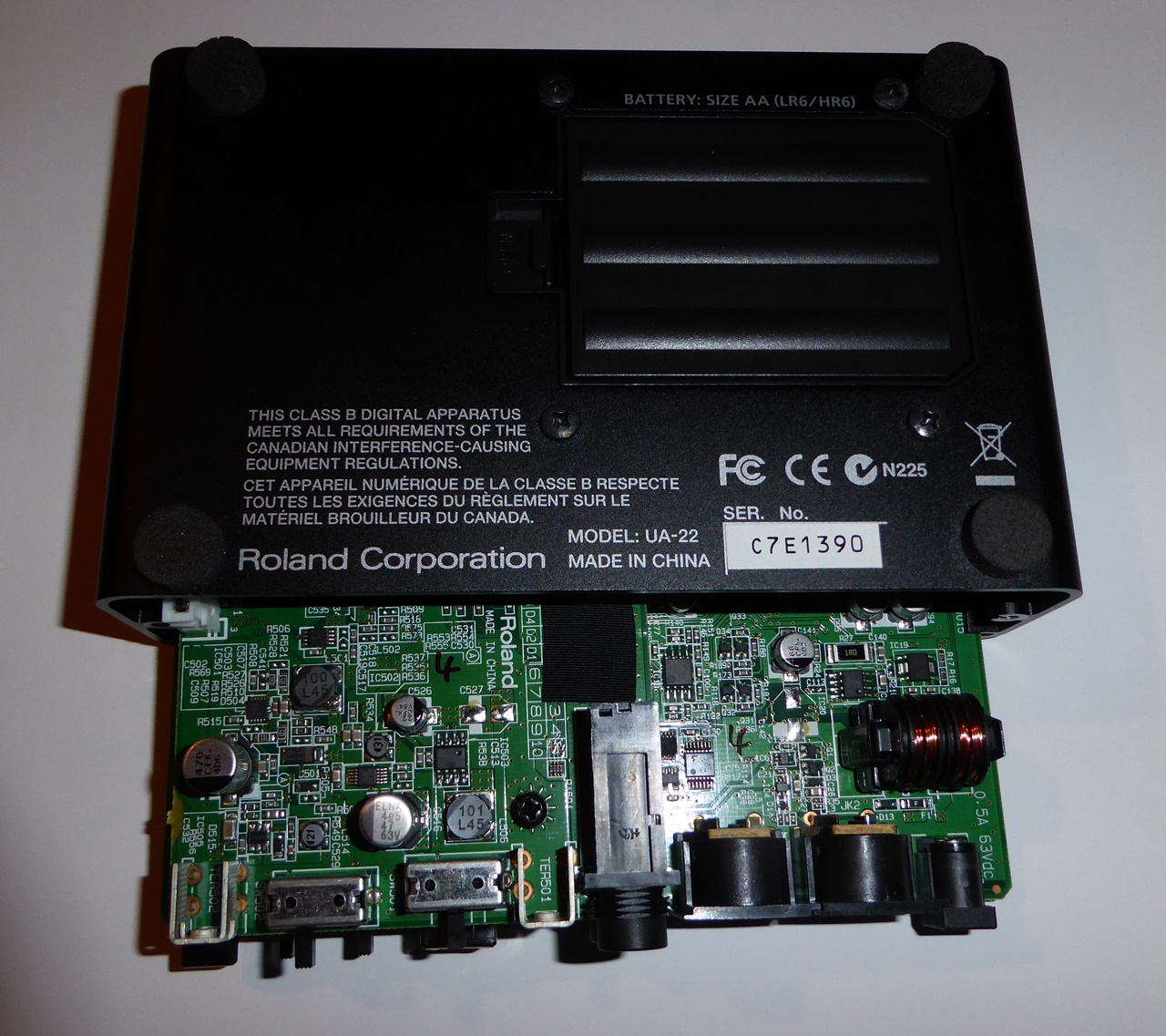 pma said:
DM+ is proven to have negligible jitter, in another tests, including mine.
Click to expand...
Just as a comparison, DacMagicPlus jitter. 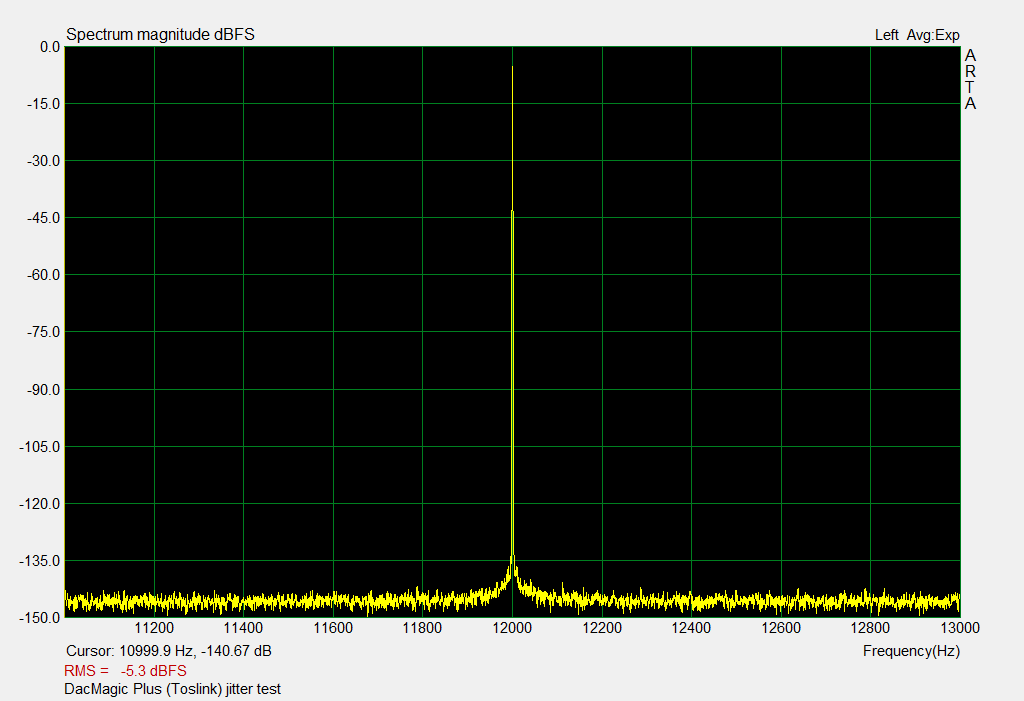