Review and Measurements of Schiit Eitr USB to S/PDIF Bridge

This is a review and detailed measurements of Schiit Eitr. It is a on a kind loan from the same member that provided me the the excellently performing iFi iDSD Black Edition. It retails for $179 plus shipping from Schiit direct (they don't sell through any other channel).

If you are not familiar with it, the Schiit Eitr is a USB to S/PDIF converter. Yes, Schiit DACs already have USB interfaces but the quality there is not what it should be. So Schiit took the design of their "Gen 5" USB interface from their higher-end units and is providing it in the form of an external USB to S/PDIF bridge/converter.

The Eitr comes in the same enclosure as Schiit Modi 2 series. Here you see it below my Schiit Modi 2 Uber which I used for this review and testing: 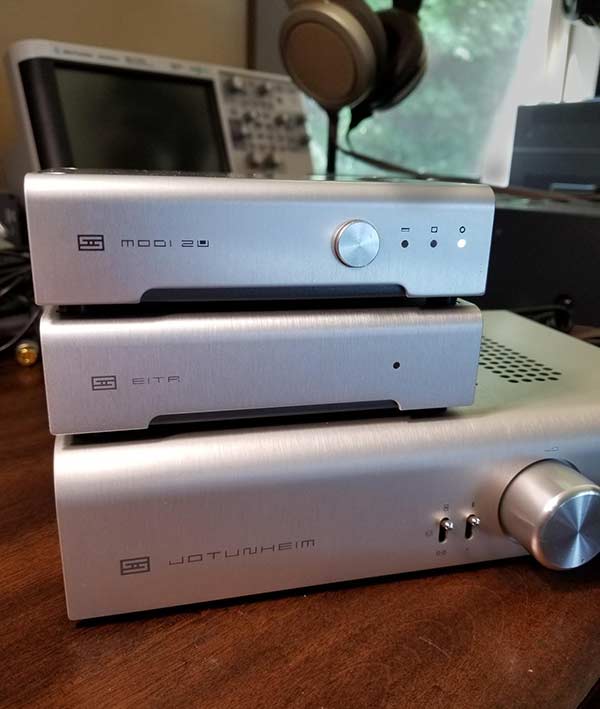 The unit is externally powered with a linear/transformer wall-wart.

I am sure you all are anxious to see how it measures and whether it improves on USB interface so let's get into that.

Measurements
Whenever I want to test some USB tweak, I go for the Schiit Modi 2 series of DACs because they are fair susceptible to USB vagaries, especially power. This makes it possible to see effects of such modane things as USB cables. The fact that it pairs up with Schiit Eitr visually and practically is a bonus here.

The weapon of choice when it comes to measurements is jitter and noise since we are changing one digital interface (USB) for another (S/PDIF). So let's look at that, comparing the USB input on Schiit Modi 2 Uber to when it is driven through Eitr to its S/PDIF input: 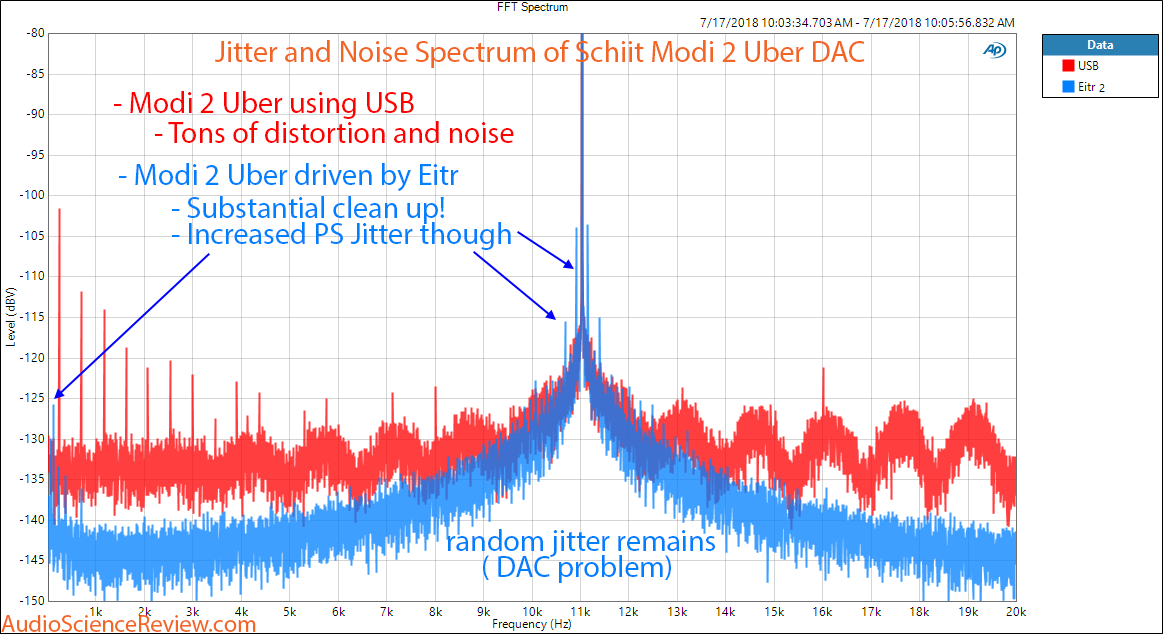 Focusing on the USB input on Modi 2 Uber, we see tons of issues there. We have deterministic distortion spikes in the form of those red vertical lines to the left. We also have some random repeating noise source that is causing that scalloping.

On the negative side we have a couple of jitter/distortion spikes around our main tone we didn't have. They seem to be related to power supply section of Eitr as shown to the left of the graph with the blue arrow.

Alas, some of the core problems of Modi 2 Uber remain such as random noise that causes that wide skirt (our main tone in the middle needs to be a sharp spike). Whatever the source of that is, is not related to the digital input used.

Next I used my Audio Precision APx555 analyzer as the source, expecting to see even more improvement over Schiit Eitr but that was not meant to be! 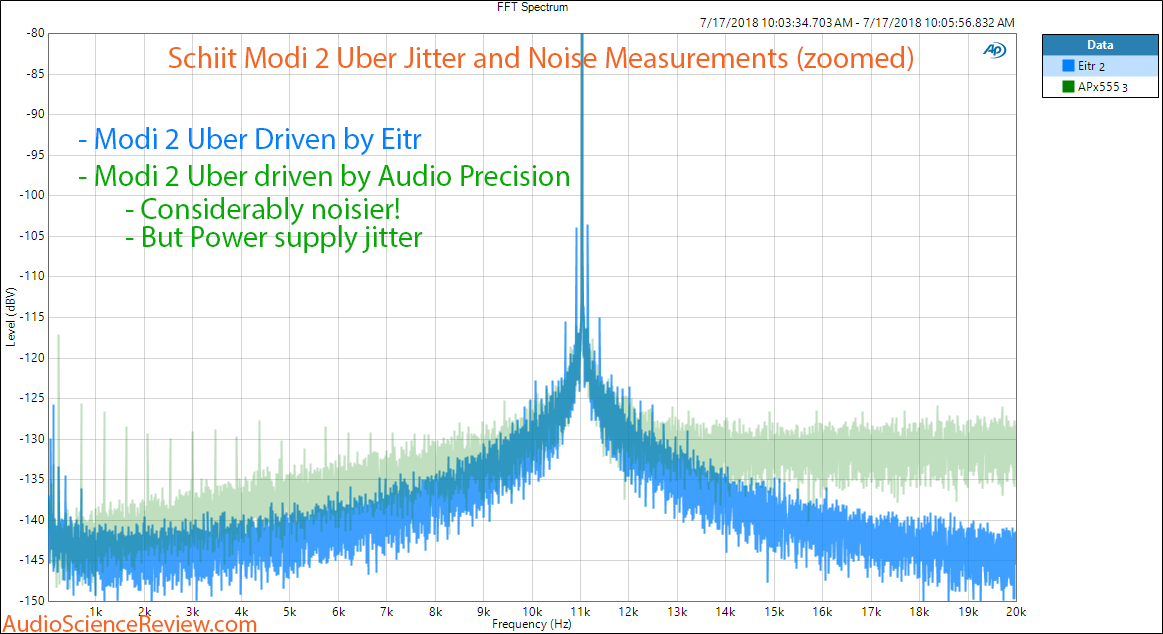 Now this is a head scratcher. My $28,000 analyzer generates worse response with Modi 2 Uber than Eitr (light green)!!! Audio Precision does better by not creating those power supply related spikes that Eitr has but otherwise, the AP is having a poor showing. Or inversely, the Schiit Eitr is doing excellently!

To analyze what is going on, I used the APx555 to analyze the jitter spectrum of itself and that of Schiit Eitr over S/PDIF: 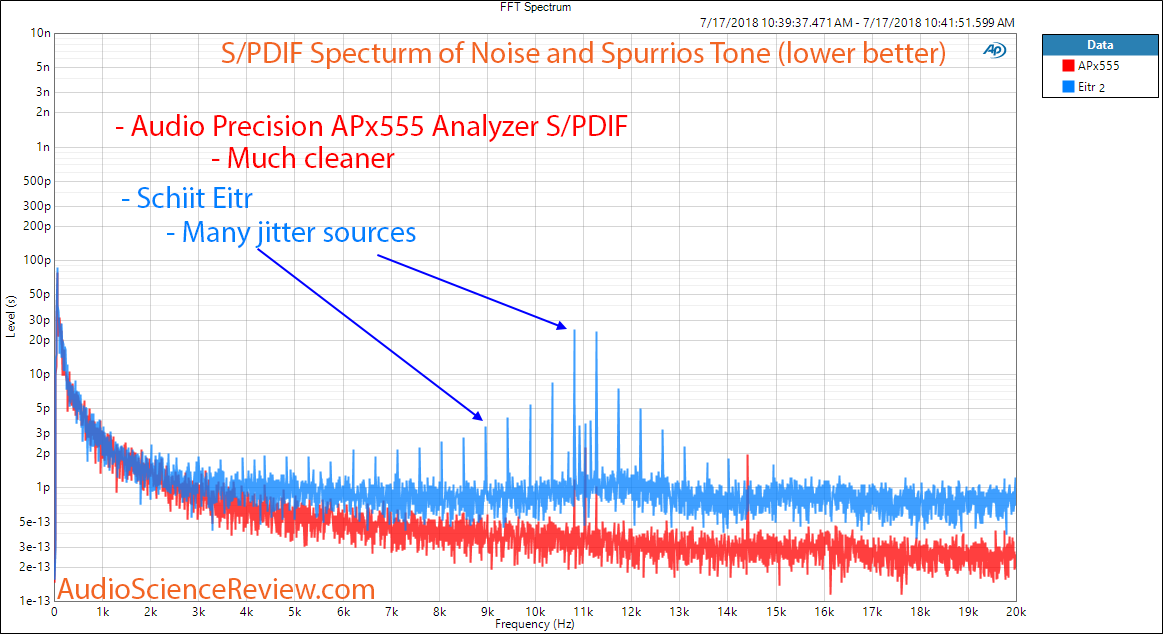 The APx555 analyzer redeems itself (in red) by having substantially cleaner signal than Schiit Eitr (in blue). The Eitr has higher noise as frequencies increase and importantly, has all of those deterministic spikes. It is a puzzle why when driving the Schiit Modi 2 Uber with these two sources, the reverse outcome shows up.

Let's try an alternative to Eitr in the form of Topping D10 DAC ($80). Even though the D10 is a DAC, it can also function as a USB to S/PDIF bridge. So let's see how that does when driving Schiit Modi 2 Uber versus Eitr (again, as a USB bridge only): 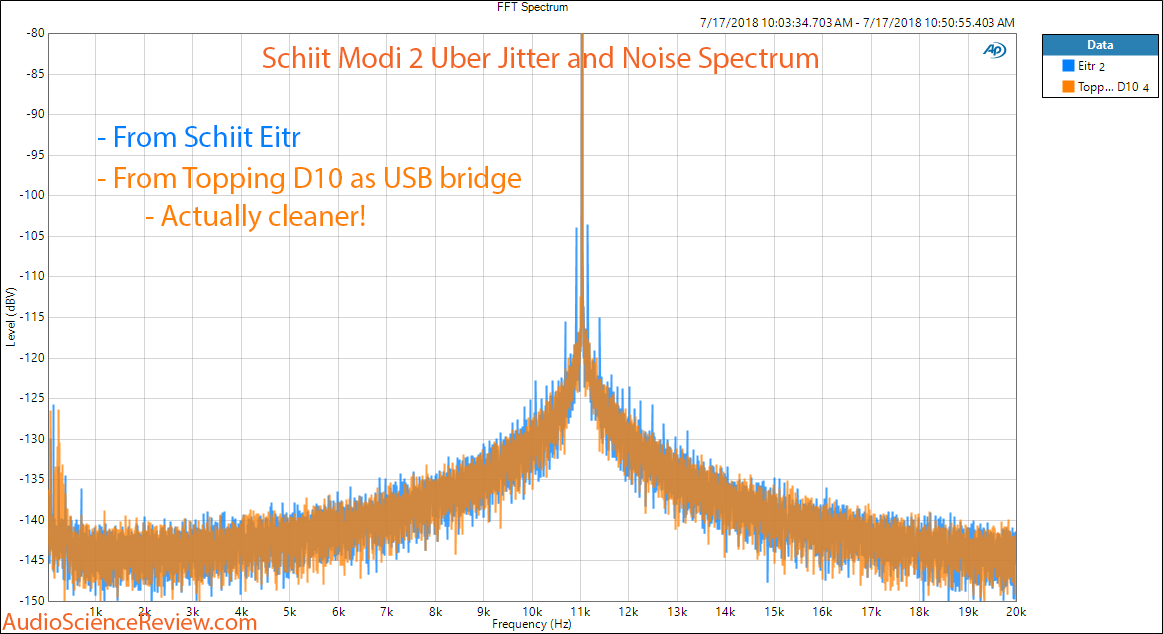 Wow, the D10 actually does a bit better! It has the same noise profile as the Schiit Eitr but is free of its power supply induced jitter around our main tone. That is because it doesn't have an external power supply and just re-filters USB power.

Let's switch gears and test a much higher performance DAC, the Topping D50 (retail around $250). Same test as before with comparison of its internal USB connection compared to Eitr driving its S/PDIF: 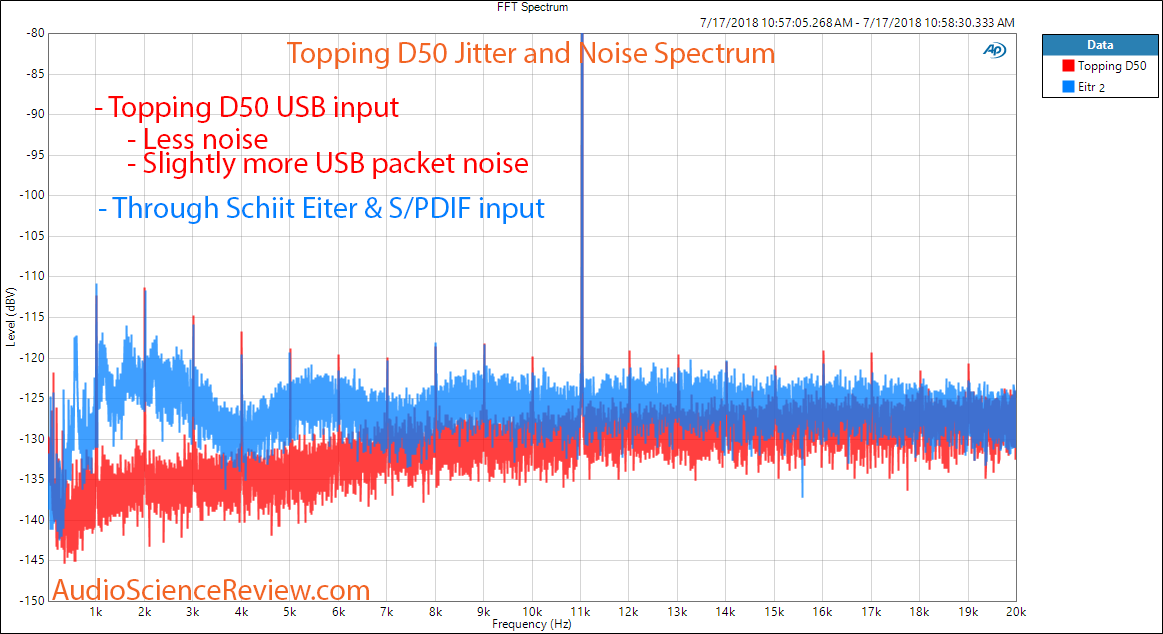 Very different outcome here. The USB input on the D50 has less substantially less noise as compared to driving it with Eitr through its S/PDIF input. Yes, there is a tiny bit of reduction in USB packet noise (at frequencies of 1 kHz and harmonics). But overall, Eiter takes us a step backward than forward.

Note that the worsening performance with Eitr is that likely the S/PDIF input on the Topping D50 is not as good as its asynchronous USB input.

I should mention that all of these are highly magnified measurements. I am using very high resolution FFT to get the spectrum and the display is zoomed vertically a lot by maxing out at -80 dB. Here is what it looks like when we change the scale vertically: 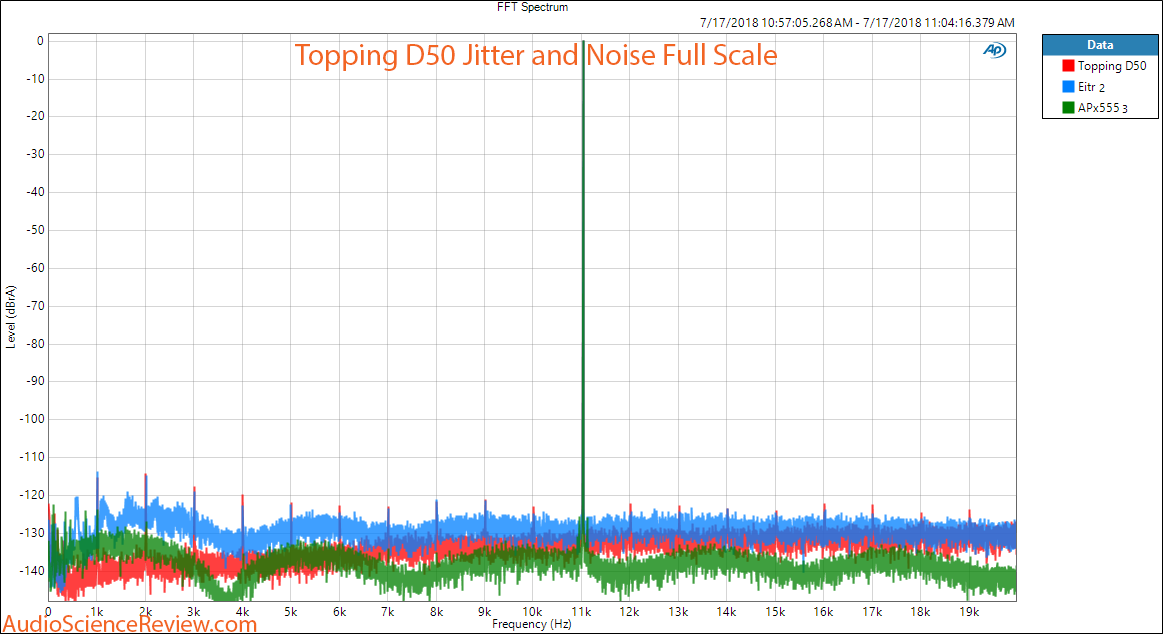 We see that the distortion spikes are at -115 dB or lower. So definitely not an audible concern. And hearing random noise is a tough thing in audio.

Conclusions
The Schiit Eitr does it what it says it does: it brings a much better USB interface to Schiit products than is available in their lower end offerings. It makes a significant improvement in the measured performance of Schiit Modi 2 Uber for example. It only has a tiny design flaw and that is the noise from its power supply.

The Topping D10 performs the same function at less than half the price but looks ugly as sin on top of any Schiit product. If you can hide it some place, then that won't be an issue. Then again, why not just use Topping D10 at the start instead of stack of Eitr with another Schiit DAC? I know, I know. I shouldn't ask these questions.

So overall, Schiit Eitr is recommended for Schiit lower-end DAC owners to get better measured performance.

Either in place of Eitr several times.
"The real purpose of the scientific method is to make sure Nature hasn't misled you into thinking you know something you don't actually know." Robert M. Persig
OP

Thanks. I corrected them in the text. If they are in the graphs, we will have to live with them .
Amir
Founder, Audio Science Review
Founder, Madrona Digital
Contributing Editor, Widescreen Review Magazine
Click for My Technical Background
Master List of Audio Reviews

Sometimes less schiit is more schiit..
independence, we do it together..
https://www.patreon.com/audiosciencereview

Step 2: Sell something that cleans this up in the form of a Schiit eater

Step 3: Profit? It at least shows they can do it if they try, though.

Why do it right from the start when you can charge a customer twice?

amirm said:
So overall, Schiit Eitr is recommended for Schiit lower-end DAC owners to get better measured performance.
Click to expand...
In other words, they need to get their Schiit together if they want better performance.
J

amirm said:
So overall, Schiit Eitr is recommended for Schiit lower-end DAC owners to get better measured performance.
Click to expand...
I don't have a dog in this fight but would you recommend this product for its stated purpose: as a usb-to-spdif converter connected to any dac?
G

What about for the Yggdrasil And jotunheim?

Jefrpol said:
I don't have a dog in this fight but would you recommend this product for its stated purpose: as a usb-to-spdif converter connected to any dac?
Click to expand...
I can't answer for Amir, but looking at a lot of the DACs measured, you can generally divide them into those that have well-implemented USB interfaces and those that don't. Where the interface is well-implemented, there will be no significant improvement, or a decrease in performance, by the addition of an external USB interface.

Another factor to consider is that even poorly-implemented USB interfaces will in most cases not create issues that are above the threshold of audibility. Even the Modi 2 USB interface, for example, doesn't introduce noise or other spuriae louder than -100dB in level.
OP

Jefrpol said:
I don't have a dog in this fight but would you recommend this product for its stated purpose: as a usb-to-spdif converter connected to any dac?
Click to expand...
No. Vast majority of DACs do an excellent job with USB. so much that their SPDIF may be worse!

Key is not to buy a Dac blind. Search for measurements here or elsewhere to make sure it performs and you are good to go.
Amir
Founder, Audio Science Review
Founder, Madrona Digital
Contributing Editor, Widescreen Review Magazine
Click for My Technical Background
Master List of Audio Reviews
OP

garbulky said:
What about for the Yggdrasil And jotunheim?
Click to expand...
Yggdrasil with Gen 5 USB has the same logic as Eitr so it is good to go. Have not measured Jotunheim to know yet.
Amir
Founder, Audio Science Review
Founder, Madrona Digital
Contributing Editor, Widescreen Review Magazine
Click for My Technical Background
Master List of Audio Reviews
G

amirm said:
Yggdrasil with Gen 5 USB has the same logic as Eitr so it is good to go. Have not measured Jotunheim to know yet.
Click to expand...
Yeah but it doesn't have its own linear power supply.
OP

elberoth said:
A comparo with BADA Alpha USB as a benchmark would be nice.
Click to expand...
My BADA is broken unfortunately. I can whip up my ancient audiophilleo though.
Amir
Founder, Audio Science Review
Founder, Madrona Digital
Contributing Editor, Widescreen Review Magazine
Click for My Technical Background
Master List of Audio Reviews 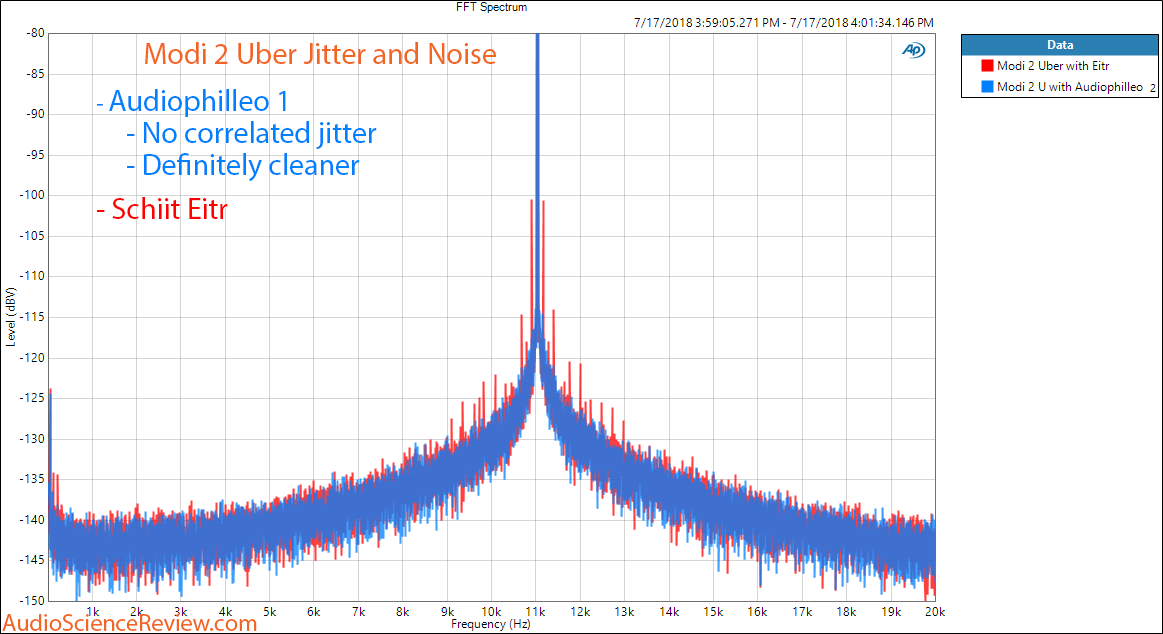