This is a review and detailed measurements of the PS Audio NuWave DAC. It is on kind loan from a member. Looks like the NuWave DAC came out back in 2012 and it is now discontinued. The original cost was US $999. Strangely, I found two of them used on ebay selling for US $1,500! So the price has gone up since release.

From feel and heft point of view, the NuWave leaves a positive impression: 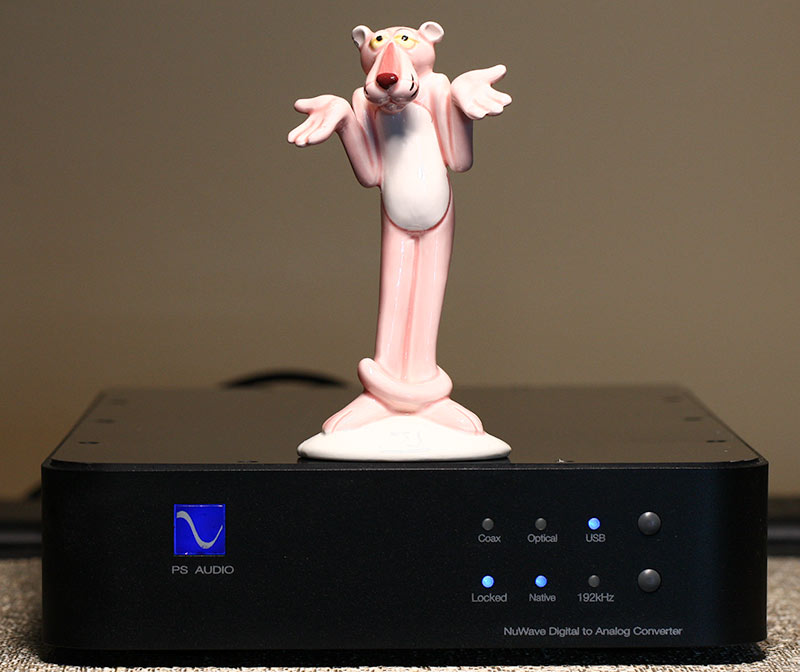 You can't tell from this picture due compression of the image using my 100 mm macro lens. In reality, it is a very deep unit, twice as deep as a typical desktop DAC.

The top is high gloss and picks up fingerprint oil instantly.

There are only two switches on the front: one controls the input and the other, forces a resample to 192 kHz or not. I performed all my testing in "Native" mode which doesn't resample. PS Audio manual recommends this mode. I was there were indicators for sample rate in the front panel.

I am not going to bore you with a picture of the back. Suffice it to say that it has XLR and RCA outputs which is quite nice and usual trio of USB, Toslink and Coax inputs.

AC power supply is built in and from the feel of the unit, it must be an oversized one.

DAC Audio Measurements
I was pleased to see the XLR output to provide a high output of 5.4 volts. In fairness to it, I lowered the input digital signal by 2 dB to get it closer to 4 volt nominal output. This improved performance about 1 dB: 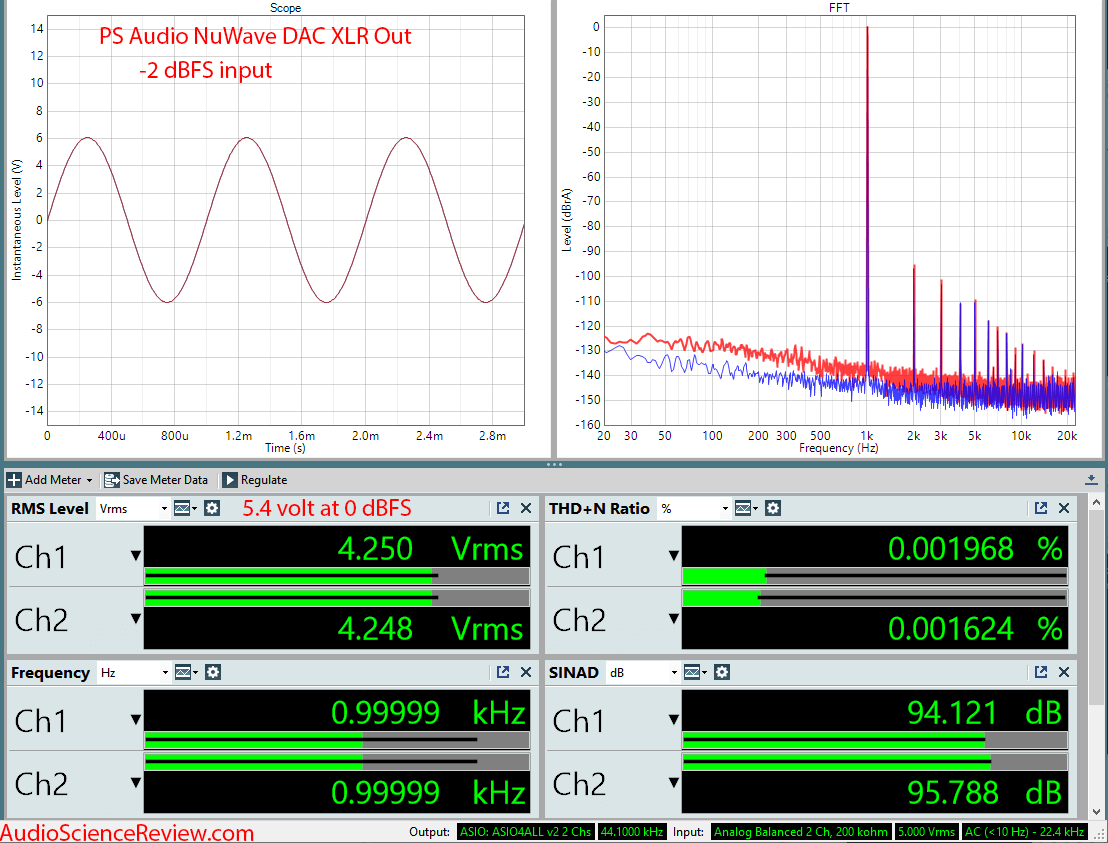 Distortion products are clearly visible and set the SINAD (signal to noise and distortion). PS Audio talks about discrete output stages so perhaps that is the cause of rather high distortion. As it is, the NuWave DAC lands in the third and "OK" bucket of some 175 DACs measured:

That may be depressing until you consider that the NuWave betters the performance of the current PS Audio DS DAC by some 20 dB!

Noise performance was very good and hence the reason it did not impact SINAD: 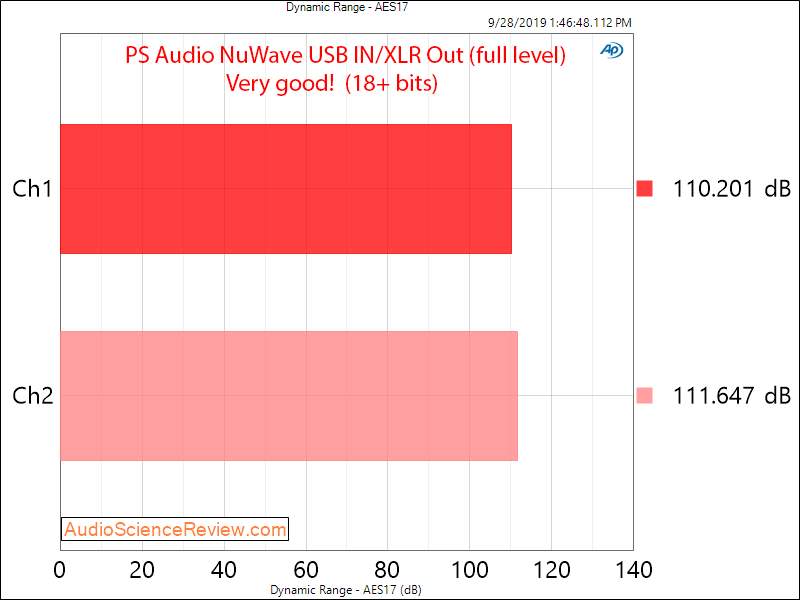 The above predicts that we can't get to -120 dB limit of our linearity test and indeed, that is what happens: 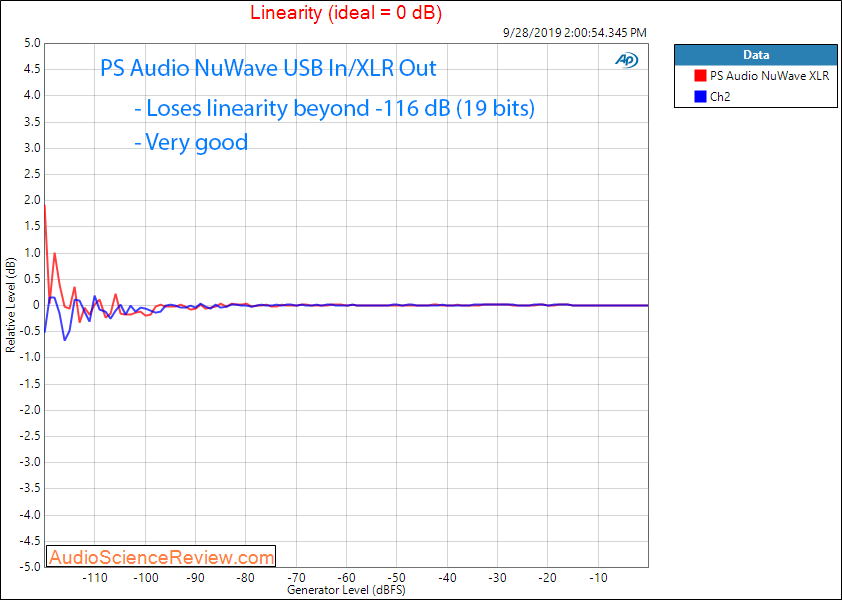 Still, that is respectable performance.

Intermodulation distortion versus level was disappointing as we approached full output: 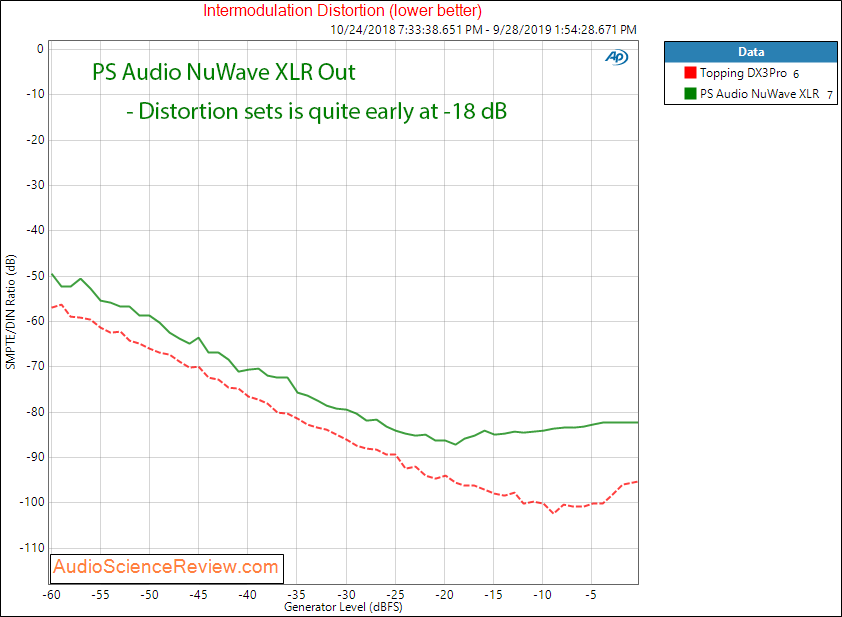 That analog output is again the likely source of distortion as even cheap DACs do better than this.

For the rest of the graph, performance is good as helped by the low noise of the unit.

Multitone shows the effect of distortion products in the extreme: 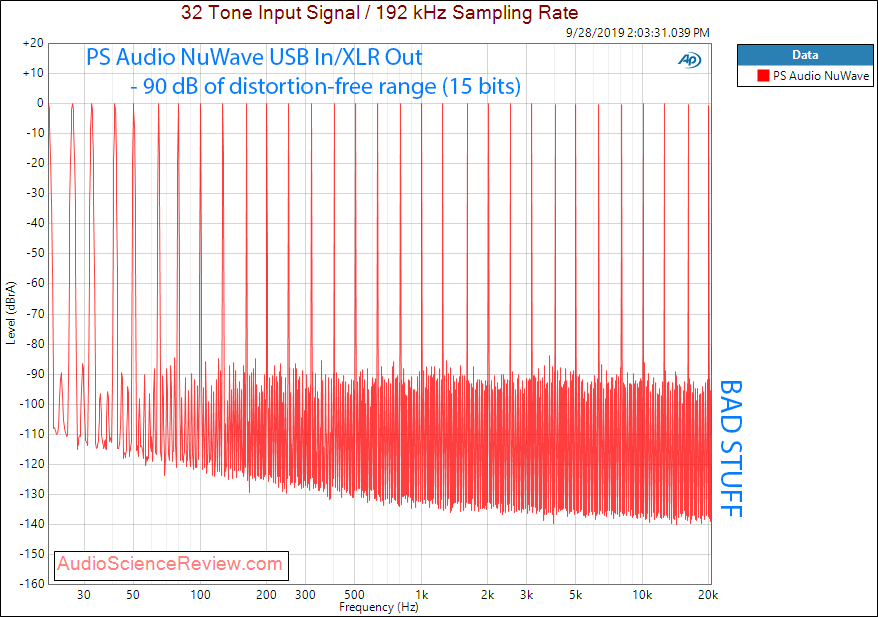 This is not a good showing. And neither is THD+N versus frequency: 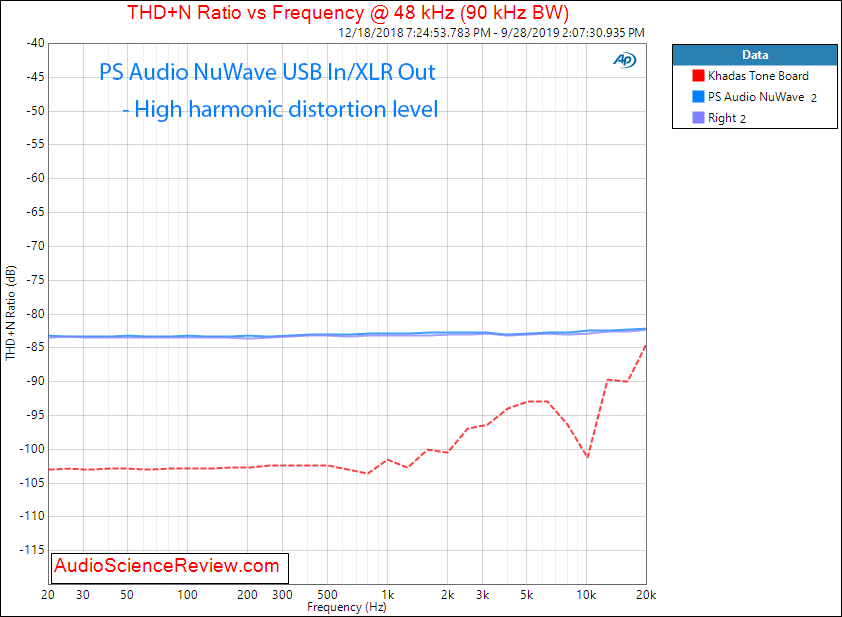 Frequency response had some oddities: 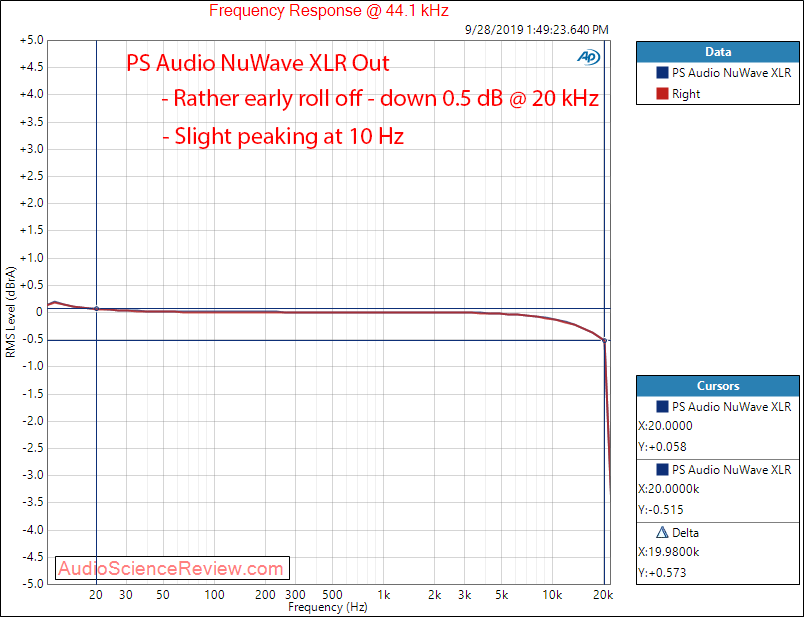 Not an issue for us older folks but younger people may be missing out on a bit of high frequency extension.

Filter response is typical of what we see in IC DACs: 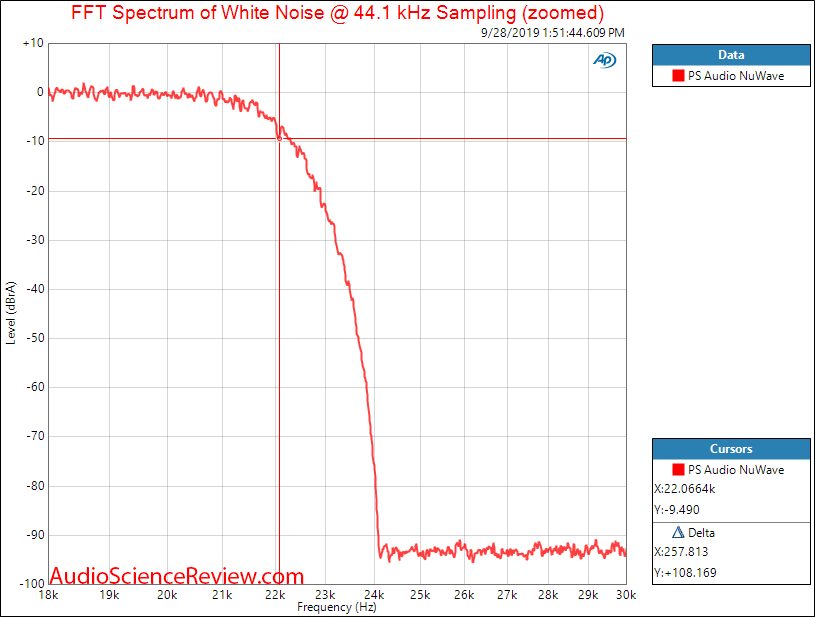 Instead of rolling off at 22.05 kHz as required by theory, they take their time and do so at 24 kHz.

Jitter analysis showed good bit of extra stuff we like to not see: 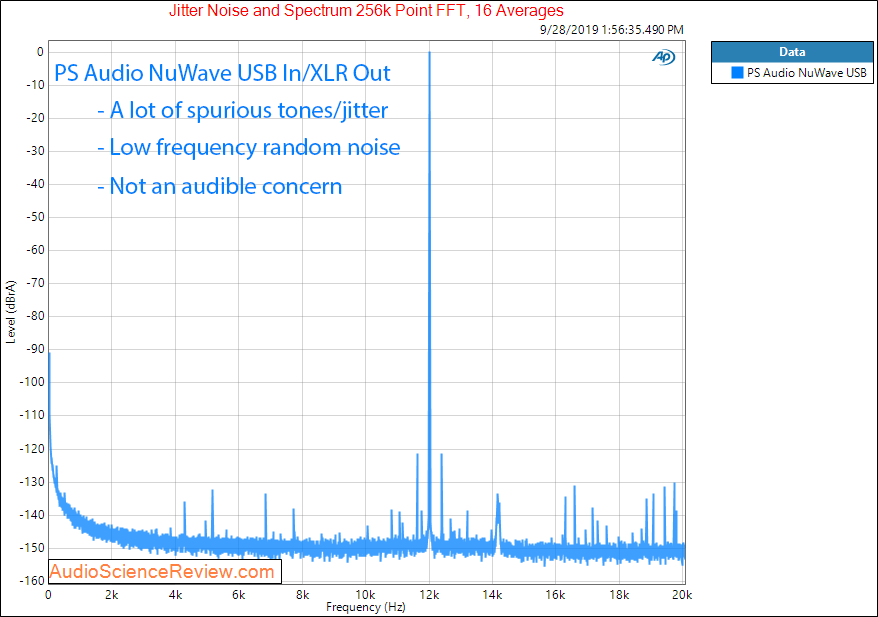 It was the first time I have seen that exponential rise in low frequency noise which indicates random noise.

Conclusions
As a general DAC, the PS Audio NuWave is disappointing as you can get a number of audio DACs at a fraction of its price that outperform it. So obviously nothing I would recommend. It is however instructive to compare it to the newer DACs from PS Audio. Only in high-end audio does a company go so far backward by both increasing the price of a DAC to whopping $6000, while have it perform far worse on both distortion and noise (PS Audio DirectStream DAC).

Imagine if Porsche produced a new model now that was 6 times more expensive than what they offered back in 2012, yet it was much slower and handled worse! Yet that is the reality we deal with in high-end audio. People are sold on fantasies and unproven proposals rather than cold hard facts. Only then can you convince them to buy inferior DACs for a lot more money.

Just had our very long driveway paved. Man that was expensive. I feel so poor now and could use a chunk of new cash to get over it. So please consider donating using: https://www.audiosciencereview.com/forum/index.php?threads/how-to-support-audio-science-review.8150/
Amir
Founder, Audio Science Review
Founder, Madrona Digital
Contributing Editor, Widescreen Review Magazine
Click for My Technical Background
Master List of Audio Reviews
M

amirm said:
People are sold on fantasies and unproven proposals rather than cold hard facts. Only then can you convince them to buy inferior DACs for a lot more money.
Click to expand...
So true.
3

Gluten for punishment aren’t we? I find it interesting that the best DAC in the world, Matrix X SABRE PRO MQA, has only 18 pages of response while PS Audio DirectStream DAC has 44 pages at this moment. Who is the better marketer? A little sad...
G

Looks reasonable for a 2012 product. Price tag probably reflects US labor rates and manufacturing costs more than anything else.

30 Ounce said:
A little sad...
Click to expand...
I'm not. The more popular is the review the more it's informative to most people, initially believing in PS Audio's marketing BS.
Anti-BS Crusader

30 Ounce said:
Gluten for punishment
Click to expand...
Only for naughty gluten-intolerant people, otherwise glutton would be more appropriate.
Ricky Roma: I subscribe to the law of contrary public opinion... If everyone thinks one thing, then I say, bet the other way...

confucius_zero said:
lets just say "people" spending that kind of money are probably looking for personal taste specific rather than objectively measured performance, some may even spend on crippled specs.
Click to expand...
That's true. And if people really want that then let them. The thing is, the fact someone likes crap doesn't make crap good, right? And more people are getting into this and are affected by "subjective" bs and get fooled by people who prefer crap. That's not normal. So measurements matters for most people.

gvl said:
Looks reasonable for a 2012 product. Price tag probably reflects US labor rates and manufacturing costs more than anything else.
Click to expand...
Would be reasonable for 2002 product not 2012. Simple cs4398 dac run on 5v dc input would outperform this by a large margin.

Thank you for leaving out your listening impressions.

confucius_zero said:
only good for that single person and the ones who's taste align with that. Measurements matter for most people, however the question is should we encourage the development of personal taste over conforming with "most people" taste.
Click to expand...
It's possible to design products for personal taste. And for no other context it's perfectly fine. However Paul said we don't know anything but he did and it's not friendly and helpful to talk objectively on his forum. In this regard, I can say we may be against it.
On the other hand, we can still evaluate products objectively regardless of the designer's taste. As this is objective and technically correct way.

JohnYang1997 said:
However Paul said we don't know anything but he did and it's not friendly and helpful to talk objectively on his forum.
Click to expand...
His ommission in informing us on his technical design intentions doesn't help the conversation one bit.

restorer-john said:
Only for naughty gluten-intolerant people, otherwise glutton would be more appropriate.
Click to expand...
Haha! Since I brew beer I should know better! Thanks for the correction.
G

JohnYang1997 said:
Would be reasonable for 2002 product not 2012. Simple cs4398 dac run on 5v dc input would outperform this by a large margin.
Click to expand...
Probably, but if you sampled the offerings in 2012 at the same price this one would be in the ballpark.
P

"People are sold on fantasies and unproven proposals rather than cold hard facts. "

We're talking about the difference between Data and Lore. So many prefer Lore in their daily lives with disastrous consequences for themselves and society.

Kinda like the way it works on Star Trek TNG.
OP

Before writing the review, I read through their manual for this DAC. There are some interesting lines in there:

The supplied cable is just adequate for the task? And there are significant improvements to be had with another able? You don't say!
Amir
Founder, Audio Science Review
Founder, Madrona Digital
Contributing Editor, Widescreen Review Magazine
Click for My Technical Background
Master List of Audio Reviews
OP

Once they get you on power cable and conditioner, might as well get you to "invest" even more in a digital cable. Why? Why would you need to know. We are saying it so it is so...
Amir
Founder, Audio Science Review
Founder, Madrona Digital
Contributing Editor, Widescreen Review Magazine
Click for My Technical Background
Master List of Audio Reviews
OP

What? No, you are not done. You need to buy more stuff for this DAC: