The review of the "DIY" Pass ACA Class A Power Amplifier reminded me that the design of my DIY preamp had been influenced by Nelson Pass, in 1997. I had to rely on subjective listening due to missing measuring equipment, and the first version of the line stage with just an opamp sounded "sterile".

While searching the internet I came upon NPs DIY pages and got the idea to use a MOSFET as a simple class A voltage follower behind the opamp, but within the feedback loop. This allowed me to set the bias current (R43) so high that the output could directly feed my Sennheiser HD580 (300 Ohm). I liked the sound and stayed with it.

Here is the schematic: 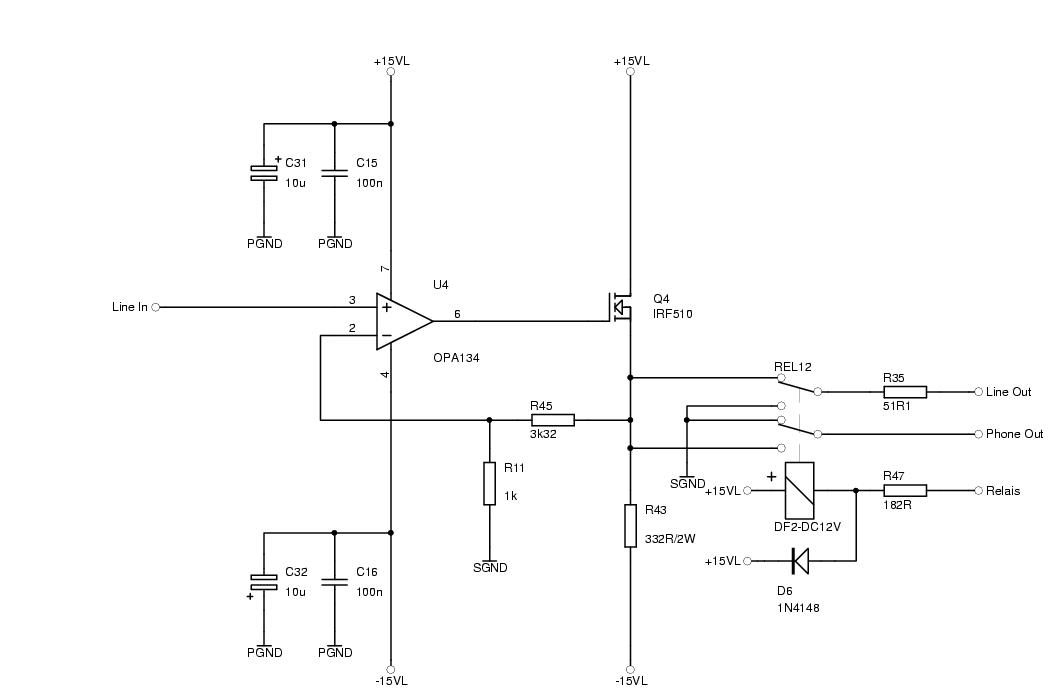 Since the THD of the ACA Class A power amp was so incredibly high I just had to check the behaviour of this line stage. I used the RME ADI-2 PRO fs to feed the input and catch the output. I really wanted to know how much negative influence the MOSFET would have.

Let's start with THD at 2Vrms in and volume set for 2Vrms out: 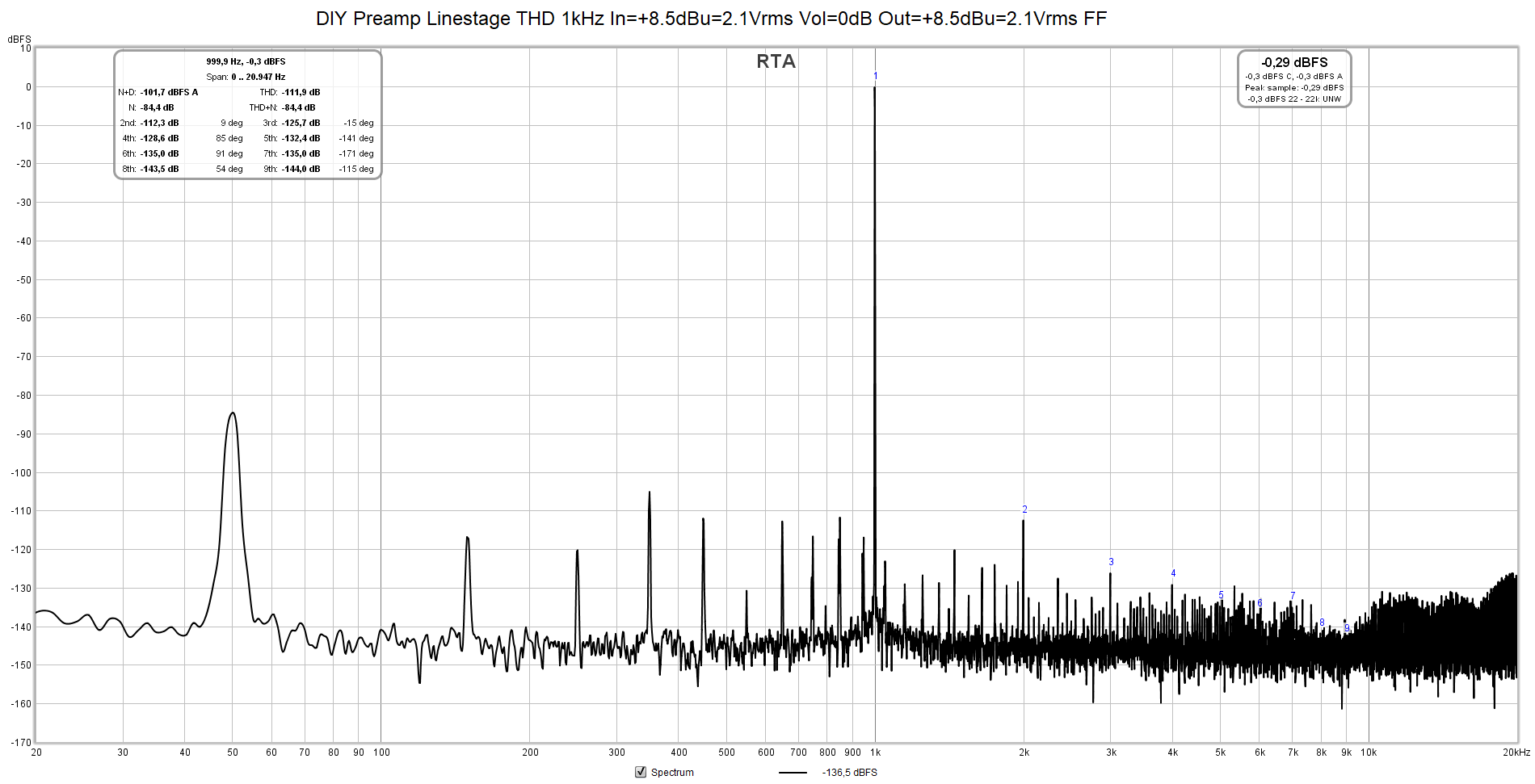 Oops, not too bad! THD is quite good, seems the MOSFET is not a problem. Noise is dominated by PS hum (despite the overkill PS

) - may have to check the power supply caps or the cables (there are just too many ...). Note that the preamp was connected to my hifi system - I was too lazy to take it out. 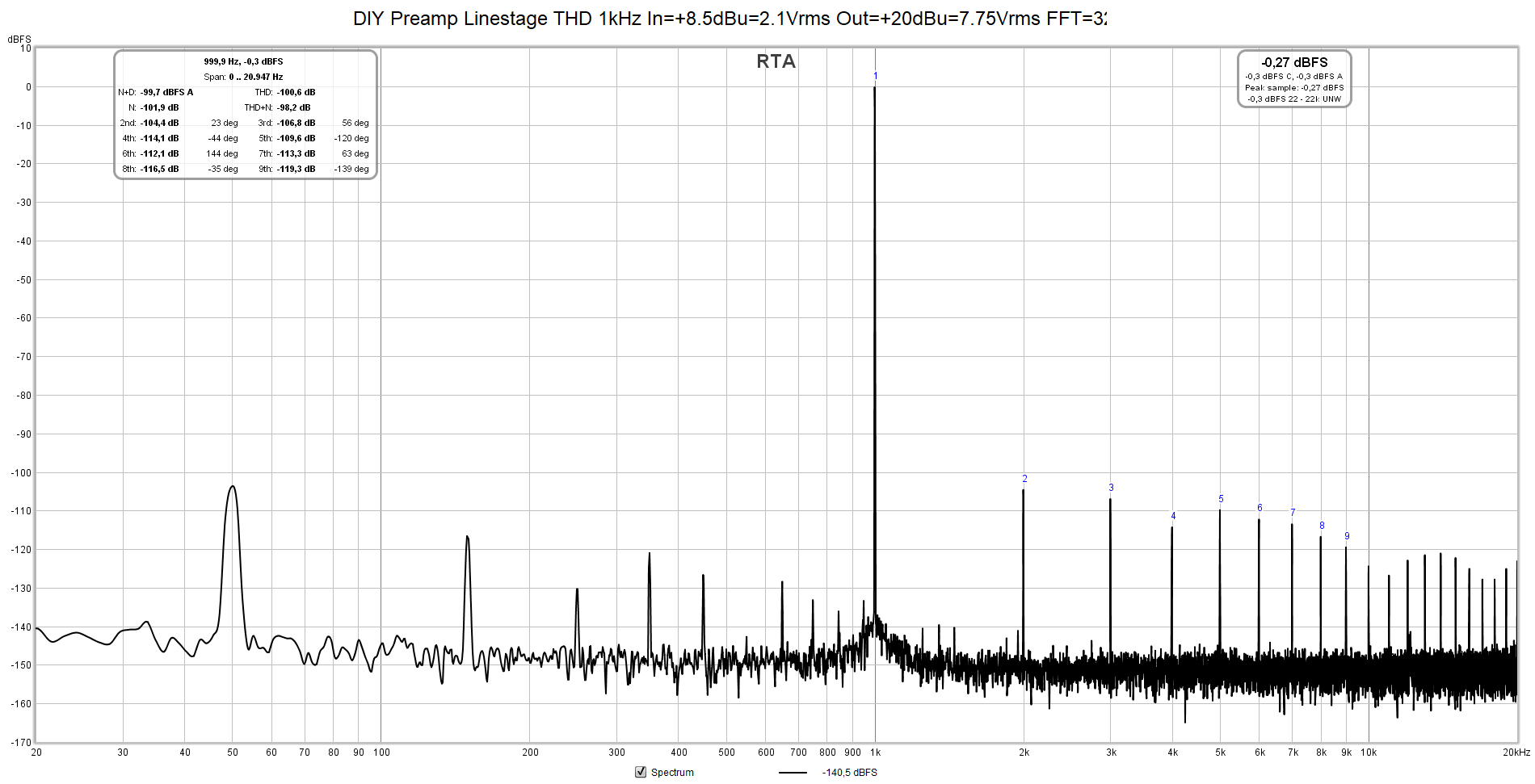 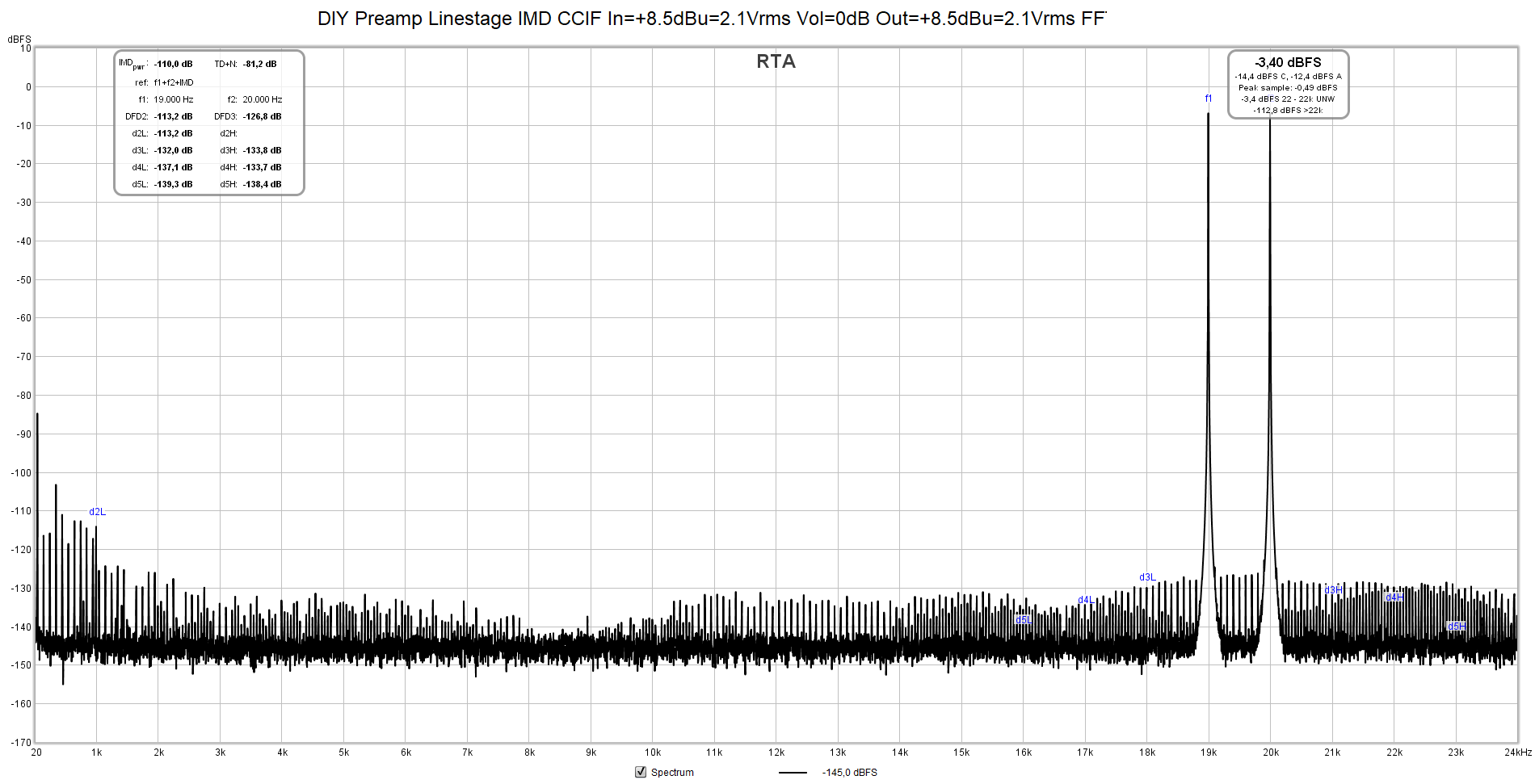 IMD itsself is quite OK at -110 dB, but there is a lot of stuff which shouldn't be there (PS noise). 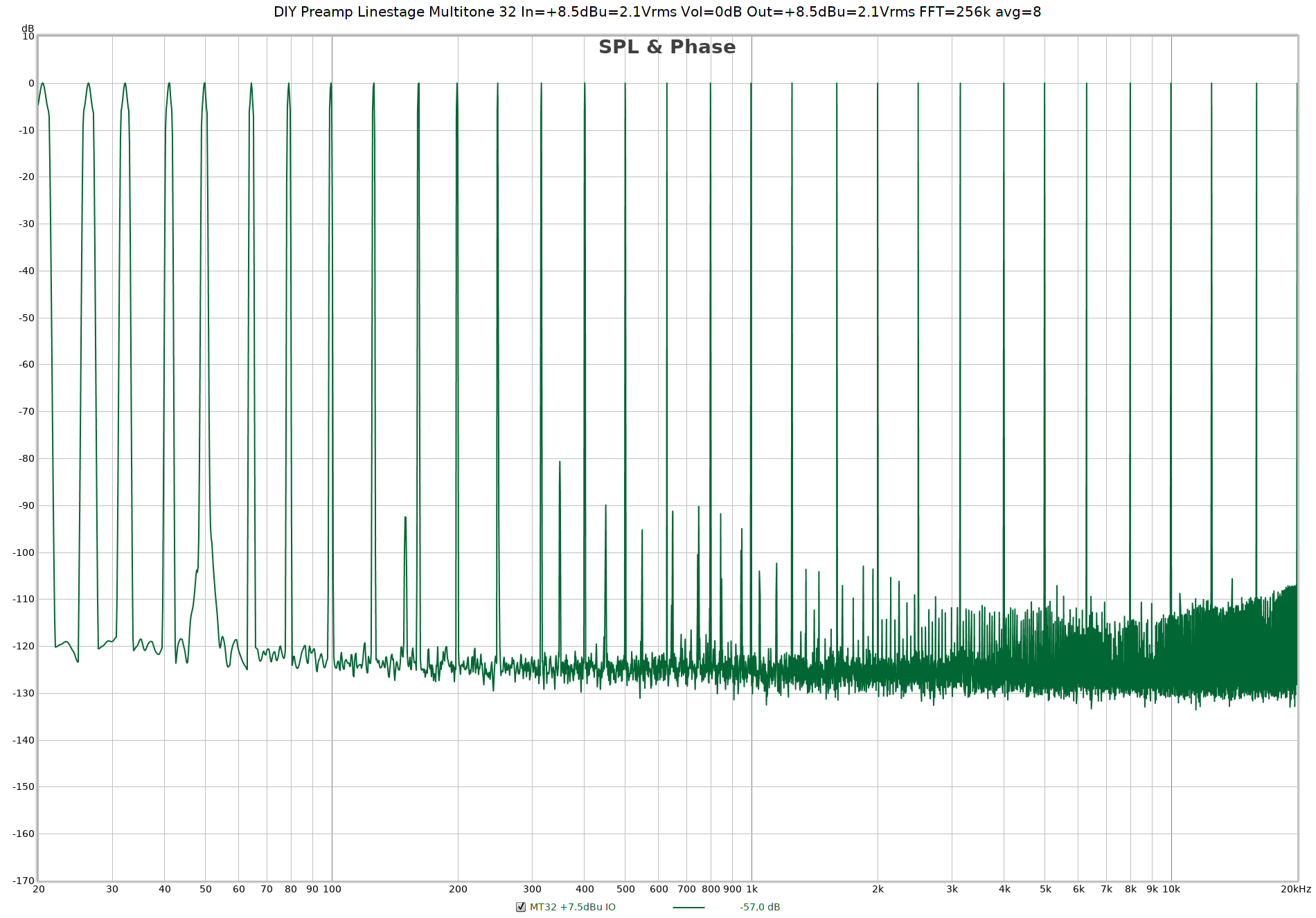 Again we see the PS noise and distortion (or noise?) at higher frequencies. 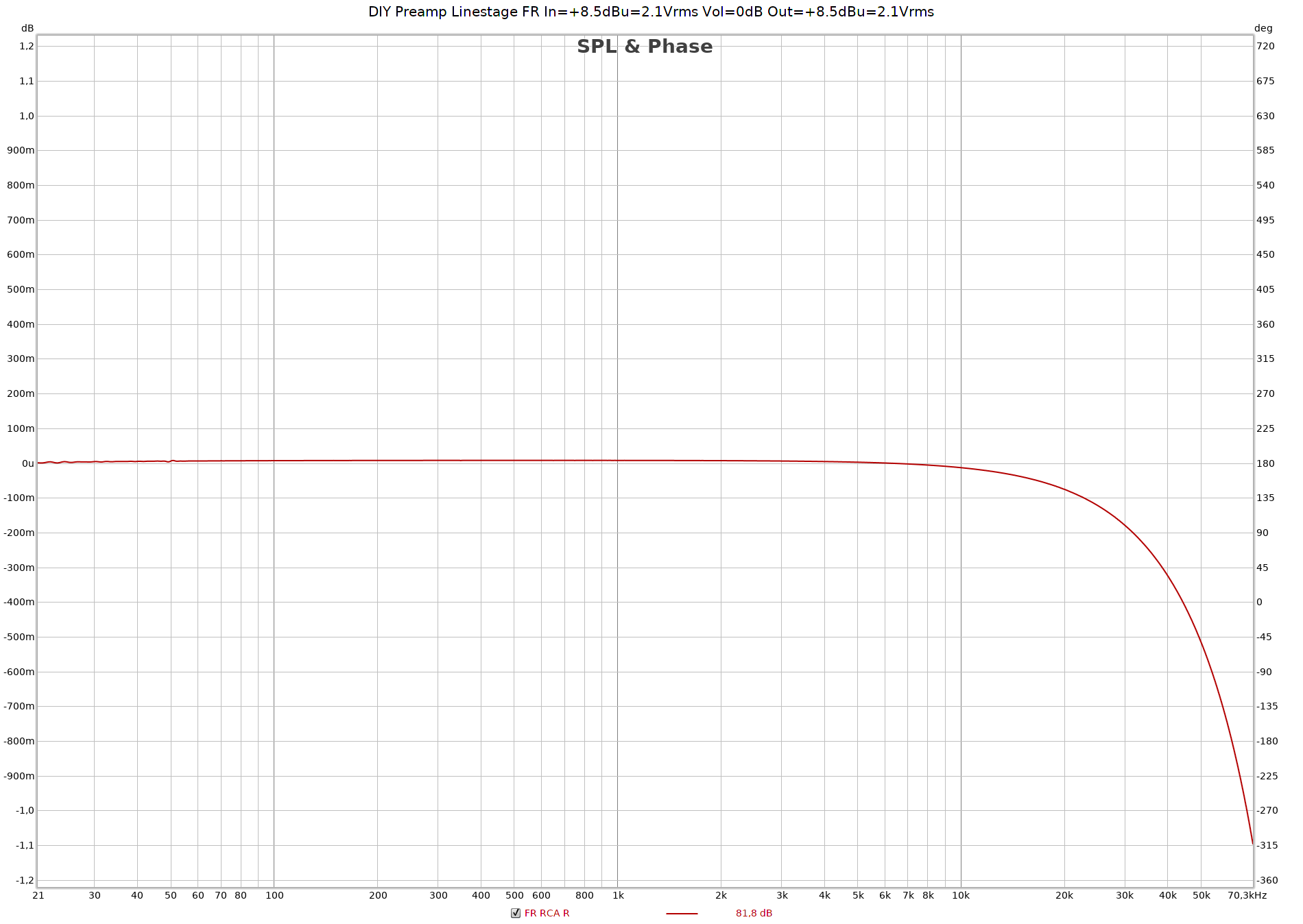 Finally a 1 kHz square signal, generated by the RME at 768 kHz samplerate and captured by REWs scope: 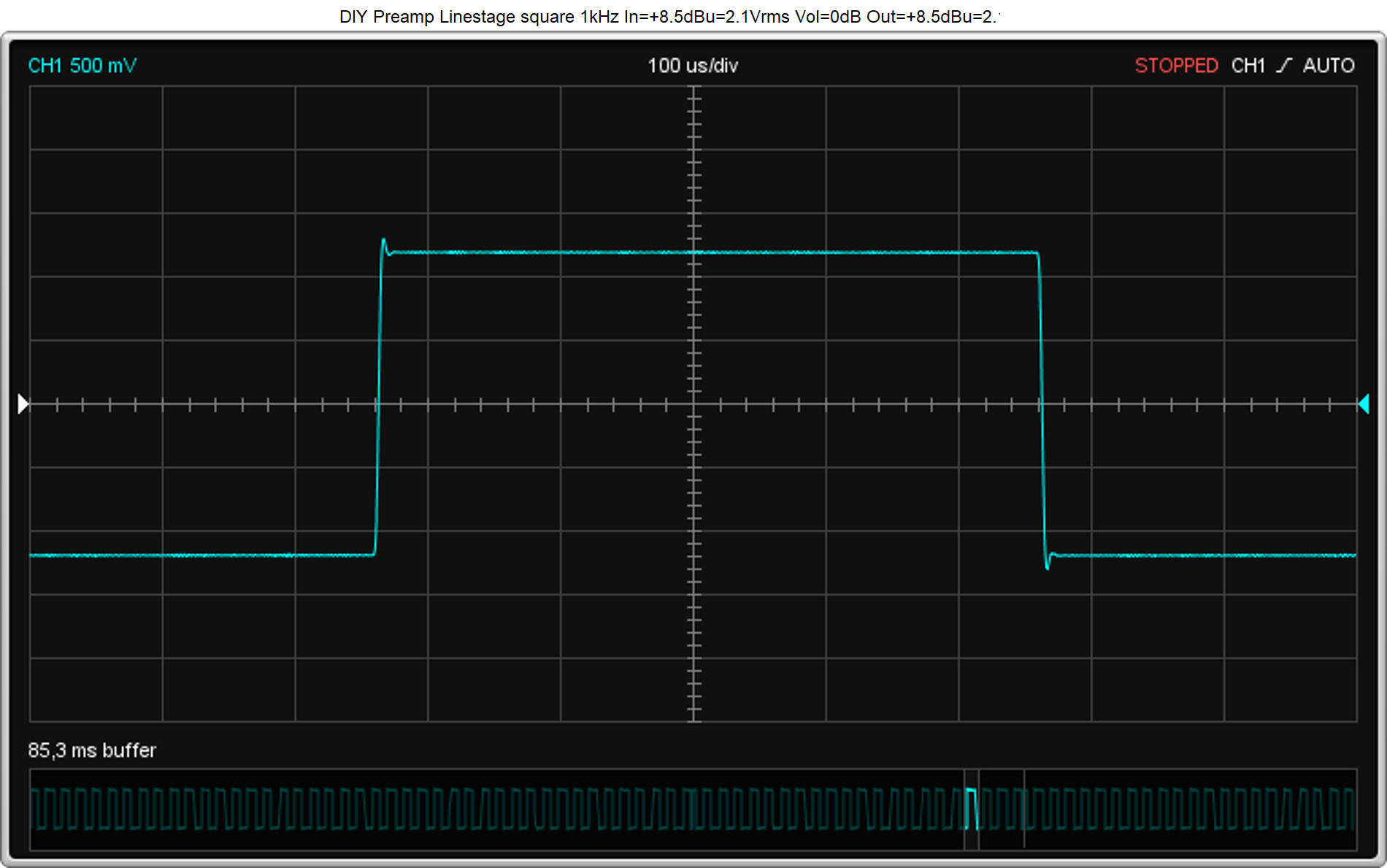 And here zoomed in at the transition from low to high: 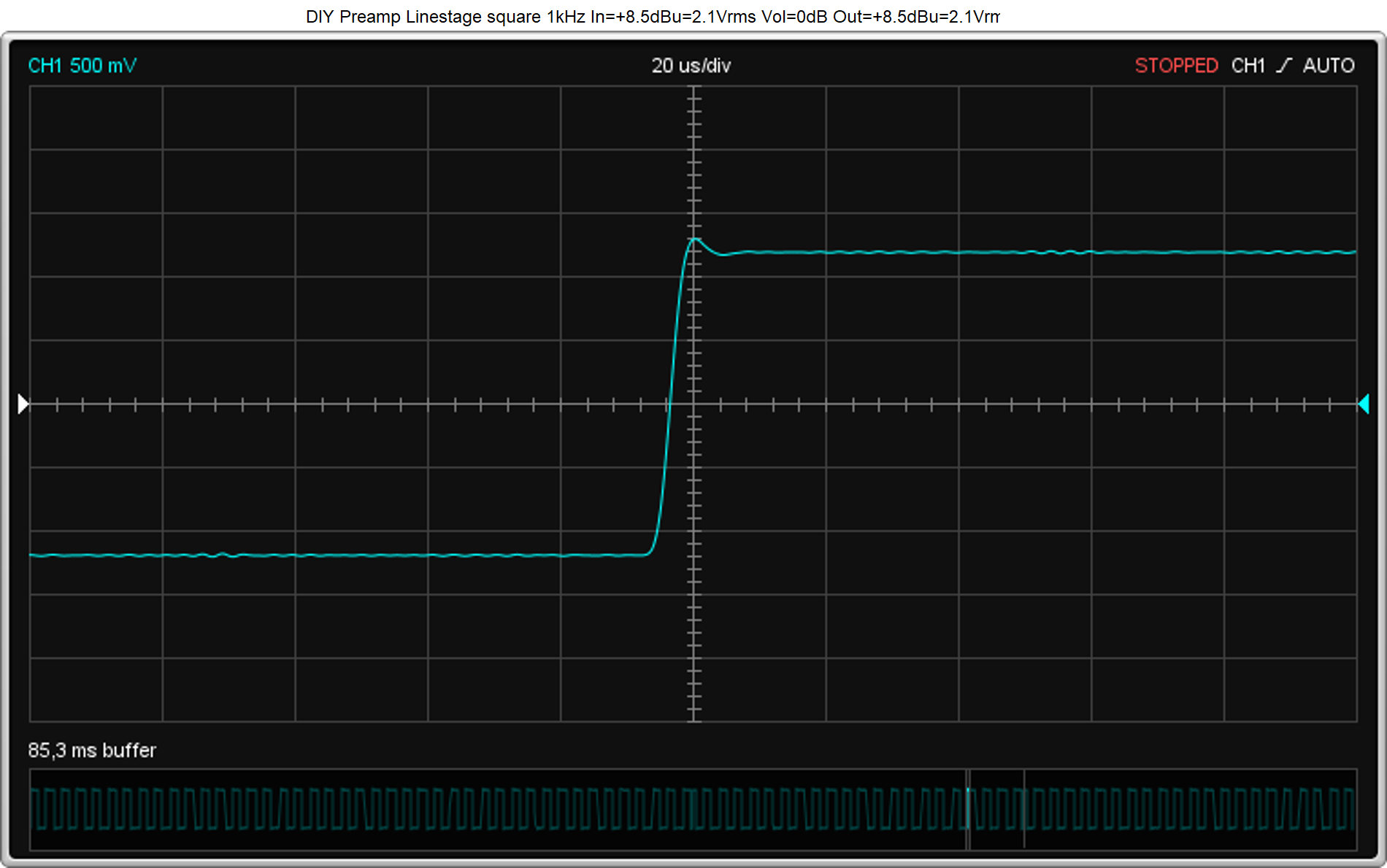 The slight overshoot is not problematic, it's not critically damped but not really ringing either. The cable was very short though.

Pretty darn good results. Now if you can just get that PS noise under-control.
"The real purpose of the scientific method is to make sure Nature hasn't misled you into thinking you know something you don't actually know." Robert M. Persig

pozz said:
Nice. Do you mind posting a few pictures of it, including internals?
Click to expand...
My first thought was: "Yes I mind". Although it is probably my best approach in DIY (it was a first for me to make a reasonable housing) it may be embarrassing to show what's inside. But then I thought that it's probably not as bad as the Ciúnas Audio ISO DAC, and I may get a hint how to improve PS hum.

Sorry, the pics are very old and of low resolution and show the preamp in its original state. Still I'm too lazy to take the unit out of my system ...

View from the front with open top:

The housing is 19" wide and 1HE high, made of steel (bought in a local DIY shop). I made all the holes though (heavy work with steel) and used a golden marker pen for the writings. 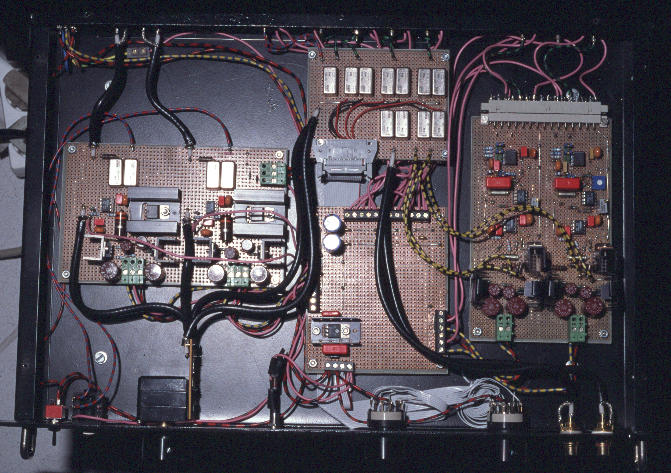 From left to right: line stage, the dual PCB with the input relais (top) and the power distribution PCB (down), and finally the MC phono stage. I see a lot of cables which are not drilled which could explain the high PS hum. 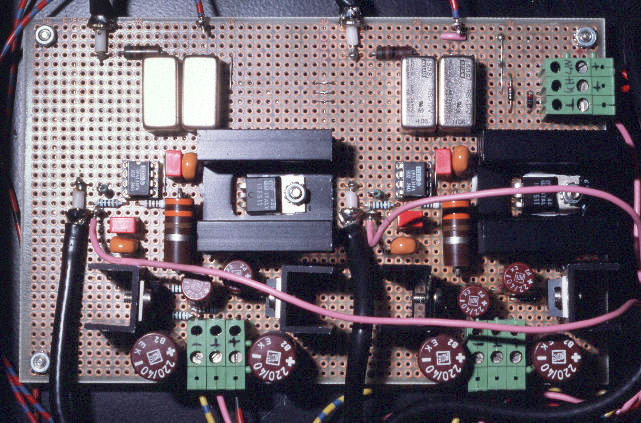 In case you're wondering: The PCB is just a lab PCB with single solder points on both sides which are not connected through. This allowed me to use bare thin wire on both sides to mimic the traces of a real PCB without getting a short to a wire on the other side. You can see a few of those wires on the PCB of the phono stage: 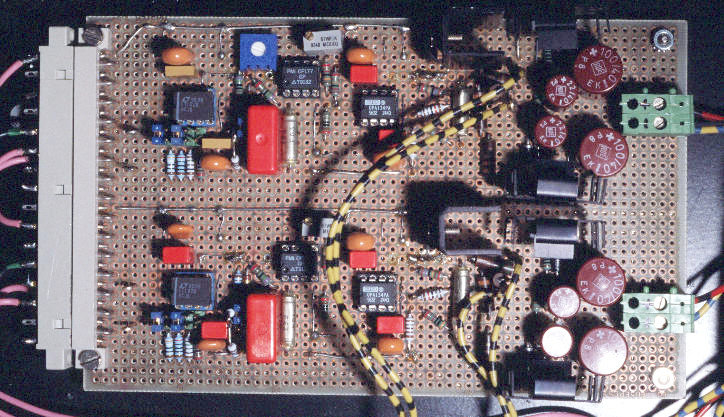 For the sake of completeness: here is the schematics of the phono stage (handwritten in blue are the mods I did a few years ago):

There were about 20 people worldwide who contacted me and told that they had rebuild this preamp (or a part of) - the last contact was a week ago where someone had built the phono stage. Most of those did a better job than me, here is one example: 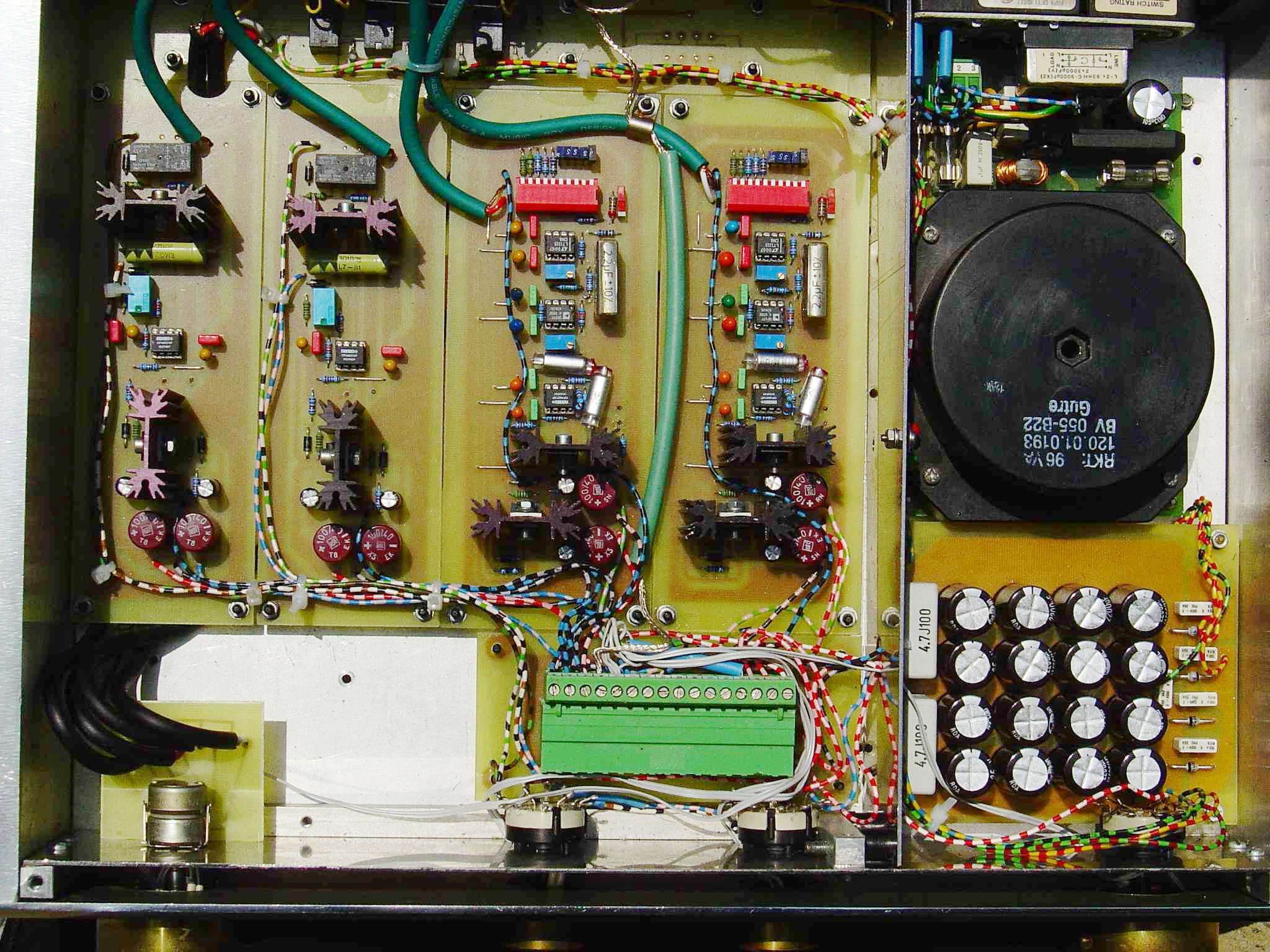 I really like the front panel calligraphy. No joke. I'm sincere.

At my local watering hole the daily special menu is usually written by hand and photocopied. I love it. I know who wrote today's menu from the hand. I prefer it to the fancy script font the up-market restaurant down the street uses with its color inkjet. Not that the nicely printed menu isn't measurably just as accurate, or their food less yummy, it's just that I find over-egged menus a bit silly.

Now that I think about it, selling gear to audiophiles has a not in common with selling a fine dining experience.
.sig

Nothing to apologize for here. Neat workmanlike construction and the measurements confirm it.
Intro and System