napilopez said:
Eh, those DefTech 55's aren't really a smiley curve -- remember that stereophiles measurements don't include baffle step correction, so the bass is shown about 6dB higher than it actually is. Likewise, what happens above 10khZ generally isn't going to matter much, especially if Destination:Moon says hearing is affected above 4khz!

Hard to compare really; the DefTechs are just much more uneven so certain frequencies will stand out, others won't. It's an interesting case study though. Without meaning any offense, it should be noted that the greater the hearing loss the less reliable measurements are an indicator of performance, something I often think about when it comes to certain audiophile markets. But it could also be the DefTechs just suit you more for whatever combination of reasons. It happens!
Click to expand...

I totally get it. Having impaired hearing has got to affect my perception of audio gear. And it's probably true of everyone. I doubt that most people have linear hearing curves.... No matter what your hearing range is.

Funny thing is that I appreciate music just as much as I ever have. Maybe more now that we have COVID and a lot more time to have listening sessions. For me, it's not so much that I notice more or less of certain notes or tones in the music. Although that is certainly obvious comparing them. What separates these speakers for me is there spatial imaging. It's getting that 3 dimensional feeling that the band is right there with you. It's a fine detail but very apparent in our room that some are better than others in this regard.

Thanks for your feedback on my comments. It's interesting to read your thoughts on why things sound the way they do. I'll probably give them another round of comparison before making a decision on them. I also have a pair of Affordable A+'s that I'll compare them to.
Last edited: Dec 4, 2021
D

Spent several hours swapping speakers back and forth listening to one song back to back, then going to another song and swapping speakers again. Its changed my mind about the 200's although, what I'm finding is still a bit confusing.

I still like the 55's because they have a more airy - 3D presentation, that is more pleasing than the 200's more stoic sound. But as I went back and forth, I noticed that the 200's gave a clearer, much better rendition of certain sounds. Mostly apparent on hand played bongos. On the 55's they sounded more like pops and clicks. On the 200's you could hear that they were much more defined and being played by someone's hands. Once I noticed it, it wasn't a subtle difference.

The 55's are slightly brighter but have a more dynamic "in person" presentation. The 200's are the more accurate but have a more stoic, 2-D presentation. I'm thinking I'll keep both for a while. Maybe with more time some other differences that weren't initially apparent will surface. One thing that really surprised me is that the 200's weren't obviously superior - especially given all the fantastic reviews, measurements and comments about them. There are pros and cons, not the stark, clear-cut difference I had been expecting....

Destination: Moon said:
Spent several hours swapping speakers back and forth listening to one song back to back, then going to another song and swapping speakers again. Its changed my mind about the 200's although, what I'm finding is still a bit confusing.
Click to expand...

My wife hates it when I do that.

Oh. On topic. It "changed [your] mind about the 200[]" from what to what?
Other than stoicism, I am not too clear on what you didn't like before that you did afterwards (or is it vice versa?).

As an aside, I don't think I've yet encountered a stoic loudspeaker. I'm not sure what frequency band is associated with stoicism.
D

Oh. On topic. It "changed [your] mind about the 200[]" from what to what?
Other than stoicism, I am not too clear on what you didn't like before that you did afterwards (or is it vice versa?).

As an aside, I don't think I've yet encountered a stoic loudspeaker. I'm not sure what frequency band is associated with stoicism.
Click to expand...

Ha! Shes not alone....I hate it too But the differences were surprisingly nuanced, and it took much more evaluating than I would have thought.

I guess I expected to be really wowed and blown away given the positivity in the long thread on the 200's. That, and the fact that I bought the 55's 10 years ago, after reading some great reviews on them in the audiophile mags. I was unfamiliar with what any measurements might mean and just went with the comments at the ends of the reviews - which seemed universally positive.

What changed my mind was that despite the 200s being more "laid back" in their presentation (I think Stoic is a better adjective), and a little more closed-up in their sound, there were percussive sounds that had a much more realistic sound compared to the 55's. I read someone else's comments on this, AFTER I made the same observation. So, I decided to keep them to further explore the differences - which happen to be subtle vs the eye-opening difference I was expecting. I could use a set of speakers elsewhere, so the 55's will now go into service in another room.

I'm writin' that down for future reference!
D

I've now had these speakers for four days and I figured I'd chime in with my impressions. I was compelled to buy them because I had a problem with my living room speakers (Axiom M3v4) and wanted to replace them with something more neutral with better bass. I bought these directly from Polk so, in principle, I have two months to audition them.

Aesthetics: I have them in the 'walnut' vinyl finish and I think it looks pretty good. A close inspection won't fool anybody into think that they are real wood, but I also doubt anybody would notice from a few feet away. I also like how the grill wraps slightly around the front of the speaker. One thing to keep in mind is that these speakers are much deeper than a typical bookshelf speaker so they can look a little odd.

Sound: I initially had these pulled out quite far from the wall (about 17'') and very far from either sidewall. I was listening about 22 degrees off axis. My impression was that they are *very* well-balanced but a little dark, and then my REW measurements backed this up. I was experiencing the sharp treble drop-off reflected in the measurements. I initially solved this with toe-in and got fantastic results. The problem was that the speakers just looked too odd in my living room to live with. So, I put them much closer to the wall and changes my seating position a bit so I was only about 15 degrees off-axis. Presto! The speakers looked unobtrusive and the treble was recovered. This did produce a bit of a bass bump which I could EQ out--but I must admit to liking it a bit.

So, the bottom line is that these are somewhat odd looking speakers that are very sensitive to positioning. However, their FR is fantastic so if you can work with the positioning they can sound excellent.

They are deep -- even compared to the aforementioned (at least by me) ELACs.
(and not that one may see this in the one photo I currently have handy) 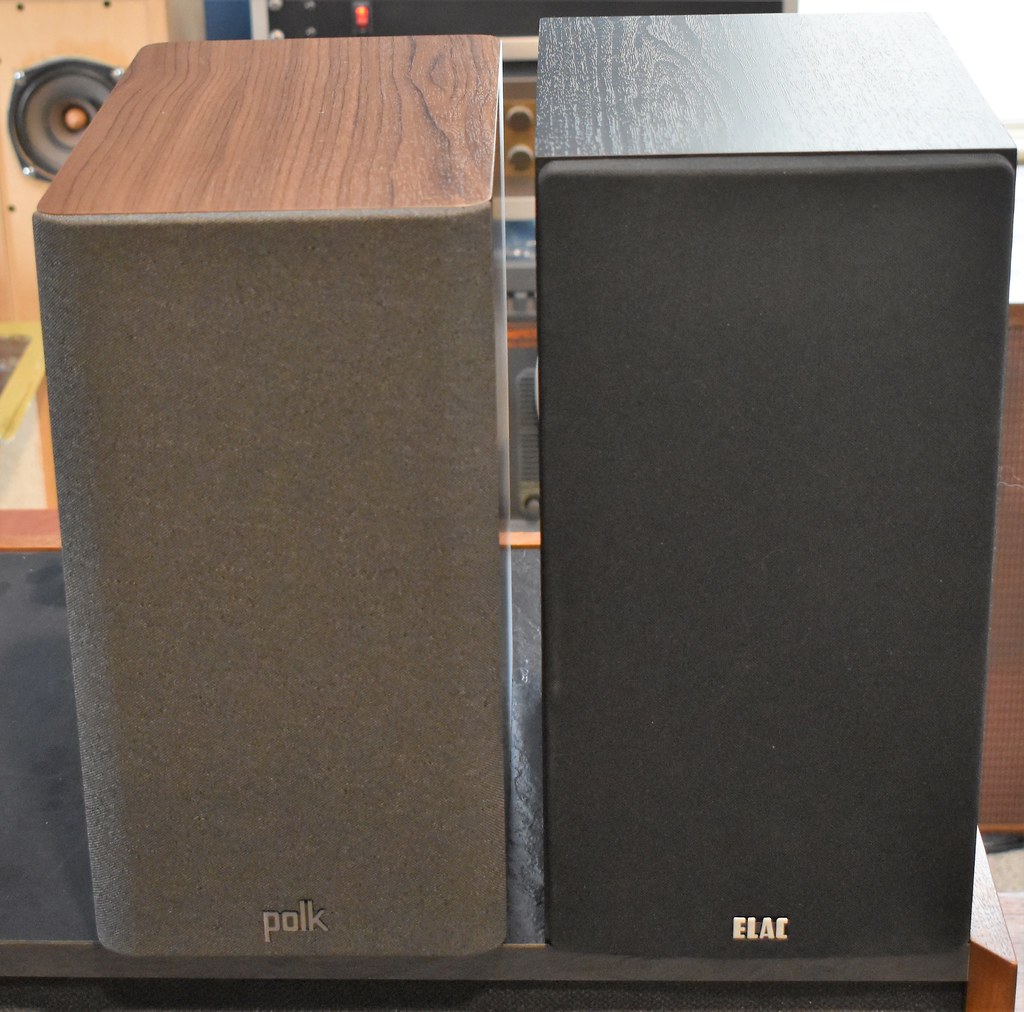 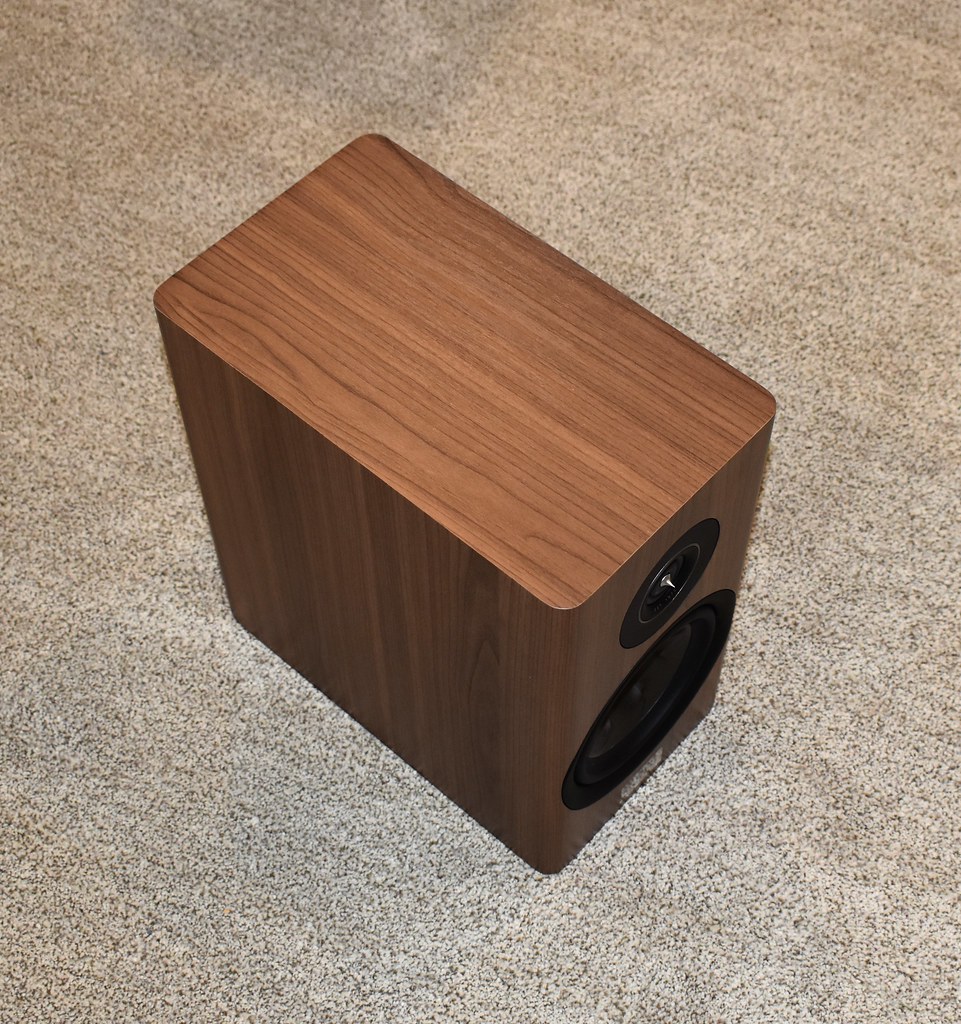 come to think of it, the R200 kinda sorta looks like a Baby Advent II but sideways.

They are very deep: 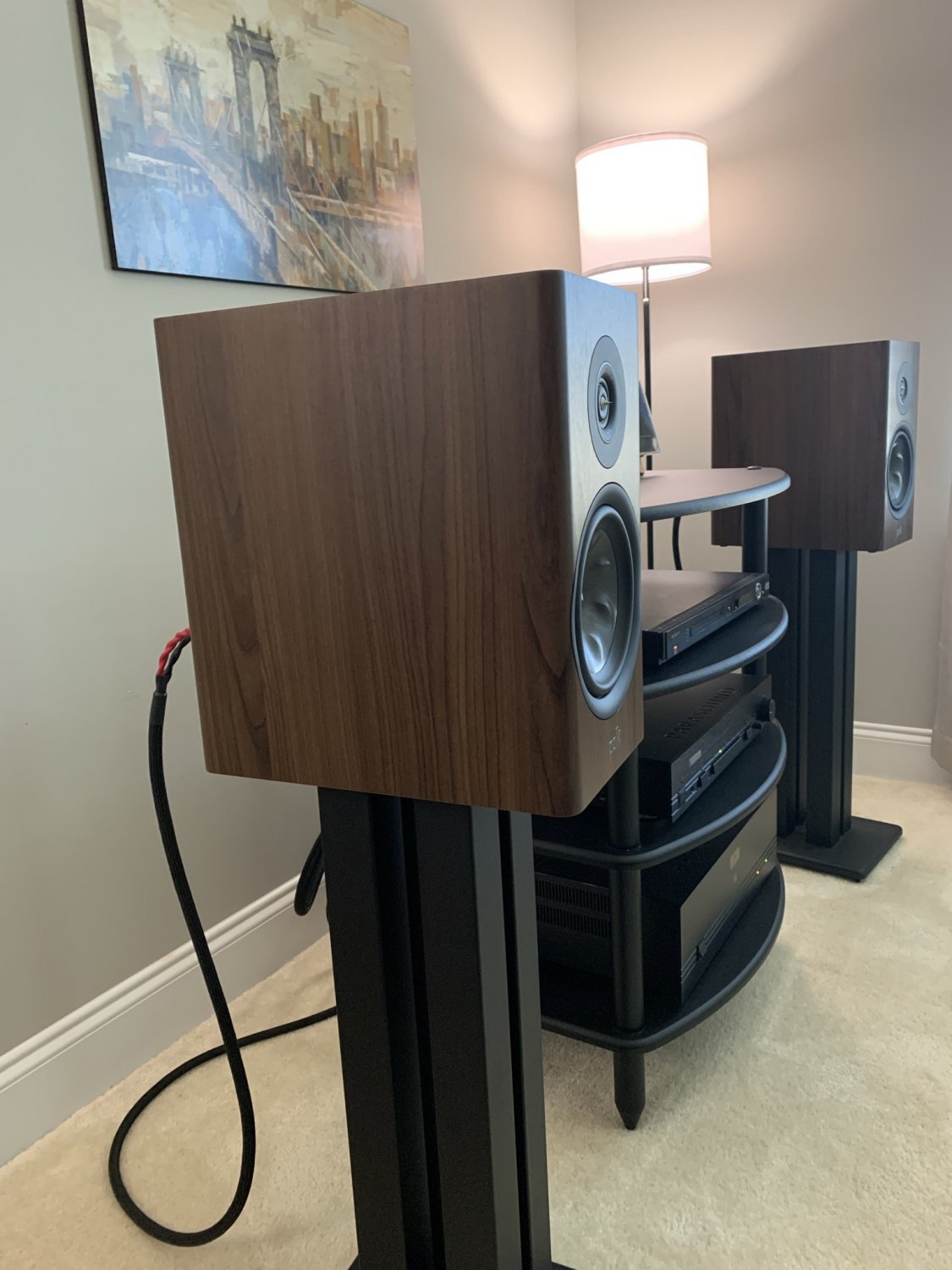 Not to change the subject and I apologize right up front* if this has already been posted here, but the Polk forums this morning had a link to a Klippel-ized review of the R100 from "Erin's Audio Corner" (whomever/whatever that is). Link offered strictly as-is and FWIW:

mhardy6647 said:
Not to change the subject and I apologize right up front* if this has already been posted here, but the Polk forums this morning had a link to a Klippel-ized review of the R100 from "Erin's Audio Corner" (whomever/whatever that is). Link offered strictly as-is and FWIW:

mhardy6647 said:
Not to change the subject and I apologize right up front* if this has already been posted here, but the Polk forums this morning had a link to a Klippel-ized review of the R100 from "Erin's Audio Corner" (whomever/whatever that is). Link offered strictly as-is and FWIW:

Thanks to @hardisj for his review https://www.erinsaudiocorner.com/loudspeakers/polk_r100/ Erin's conclusion: This speaker has good performance and is a really nice looking speaker, at least to me. I like the grille cloth color. I like the wood finish look. I like the overall...

Erin is a forum member and a consistent contributor of Klippel NFS measurements on his website. 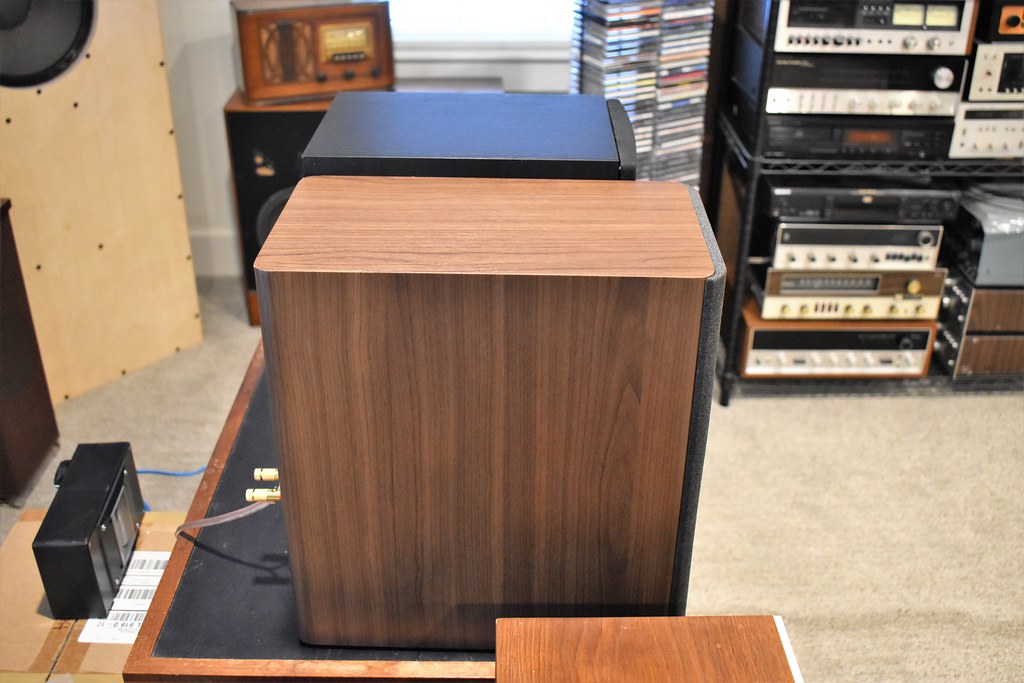 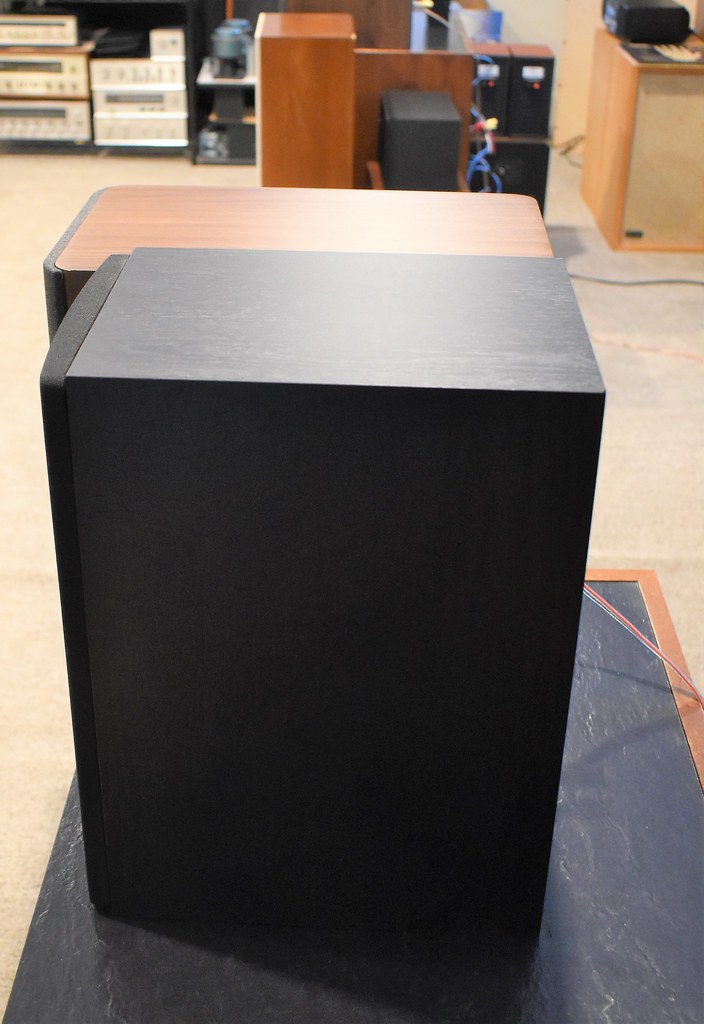 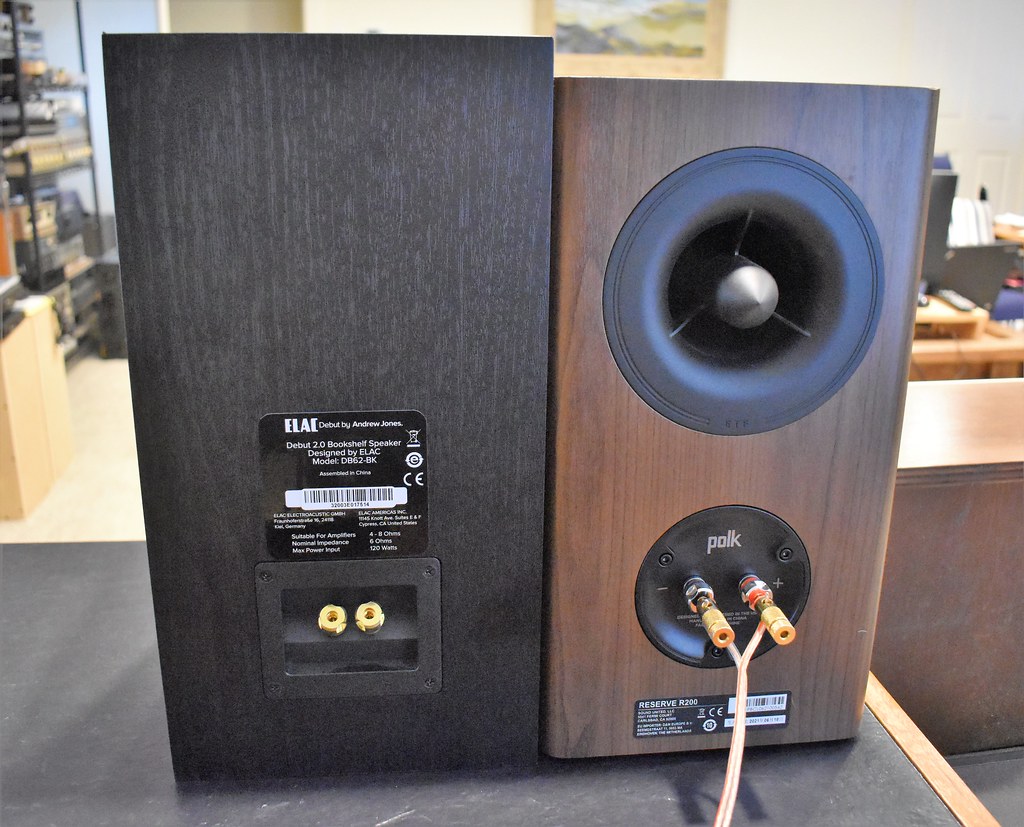 The R200's port looks like it would have felt right at home on a late 1950s Cadillac (or even other, lesser American cars of the late tail fin era). 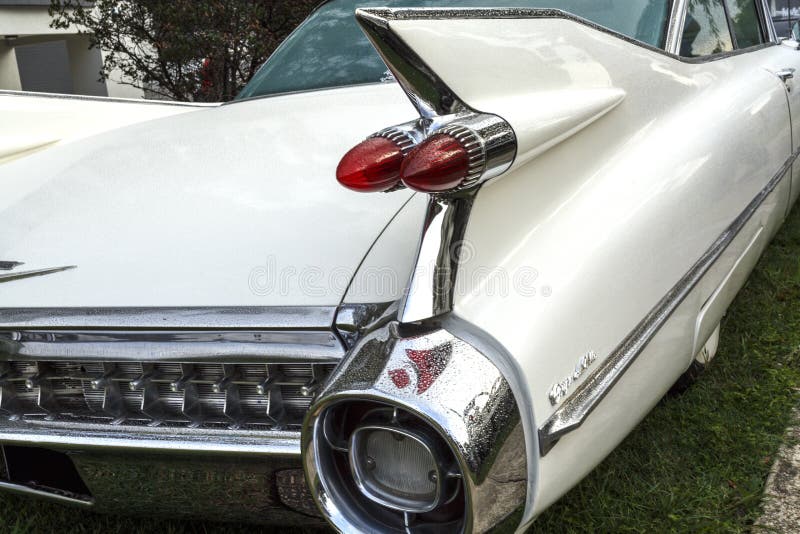 Pic attached shows the R200 'Walnut' compared to the also-faux 'Walnut' of the Monitor 10. I don't know why they went for this look, like unpopped grain covered with water poly. It's most noticeable in oblique light.

How do they sound? Fine to me. I haven't had a chance to crank them yet but they sound balanced at moderate volume.

Nth'ing other posters, they are very deep, they don't fit in the location I intended to put them in, but that's OK. 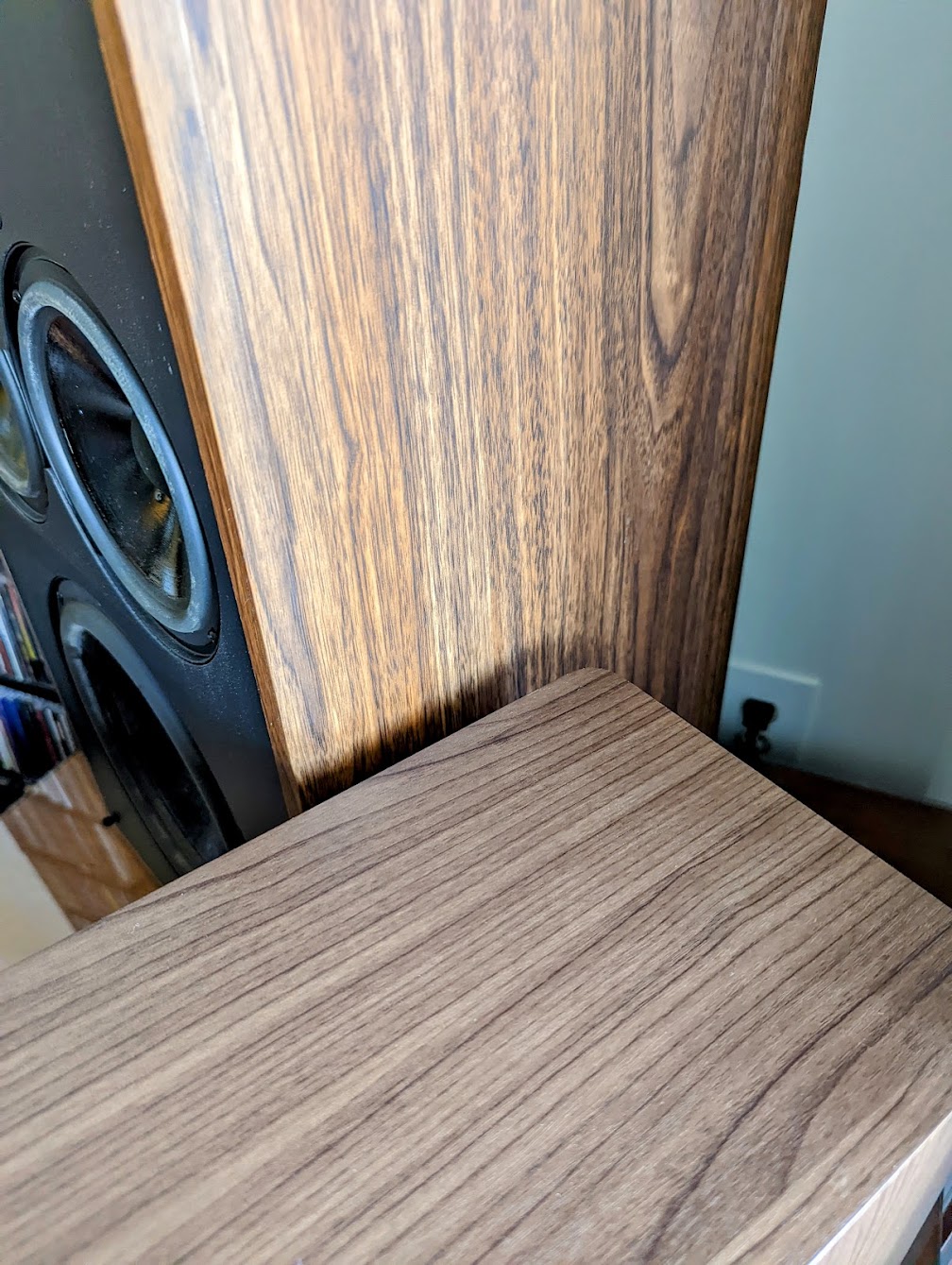 Hello. I post measurements of my room using the standard microphone attached to the amplifier.
I am curious about your opinions 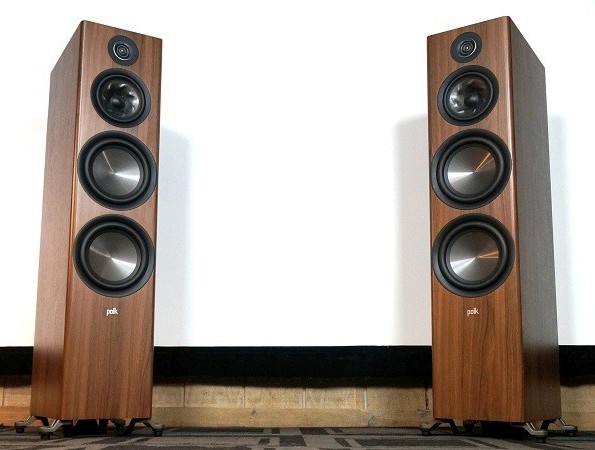 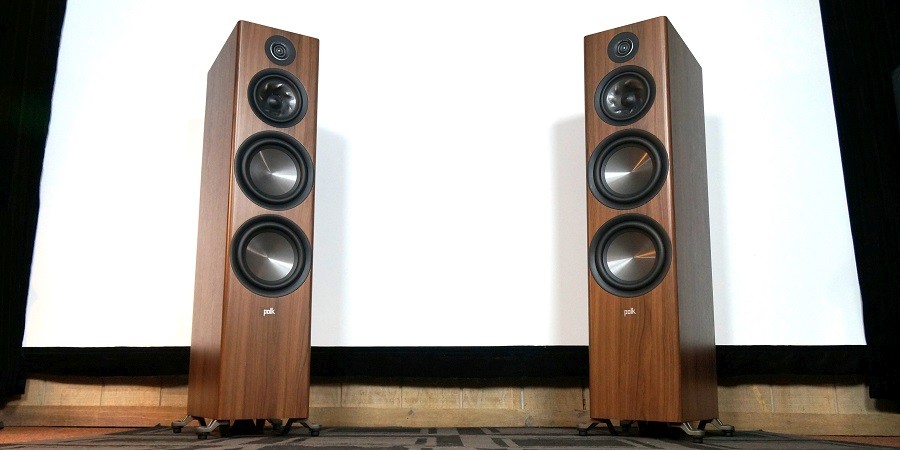 In our in-depth review of Polk Audio's Reserve R700 tower speakers, we look at just how much of the performance of the stellar Legend series has trickled down to the more affordable Reserve series.

What a shame though they used that ring radiator tweeter which beams too much in the upper octave.

Some comments from Floyd Toole about room curve targets, room EQ and more

Binaural blind comparison test of 4 loudspeakers II
You must log in or register to reply here.