How was the Harman target for IE and Speakers achieved?

I feel like its pretty well known that the Harman consumer target response for over ear was conducted using the HD800S, but how did they determine the preference target when it came to IEM's and loudspeakers? I would assume that different fields would have yielded different results based on the reference product used for that testing, but I couldn't find any information on this when looking into it. Anyone have any insight to this?
S

For speakers the setup is pretty impressive (from the pictures I've seen). They have a huge machine that switches the speaker so that the position of listener and speaker does not change. At the press of a button the speakers rotate to allow relatively quick switching.
For some reason the video I saw seems to be unavailable now though.
A

This is probably more than you'll want to know, but much of Dr. Toole's research on speakers at Harman is available to the public. Though some of it is behind an AES paywall. Dr. Toole has written several articles though for different publications, including Audioholics. And his white paper on The Measurement and Calibration of Sound Reproducing Systems, which details some of the studies you asked about, is available for free download here... 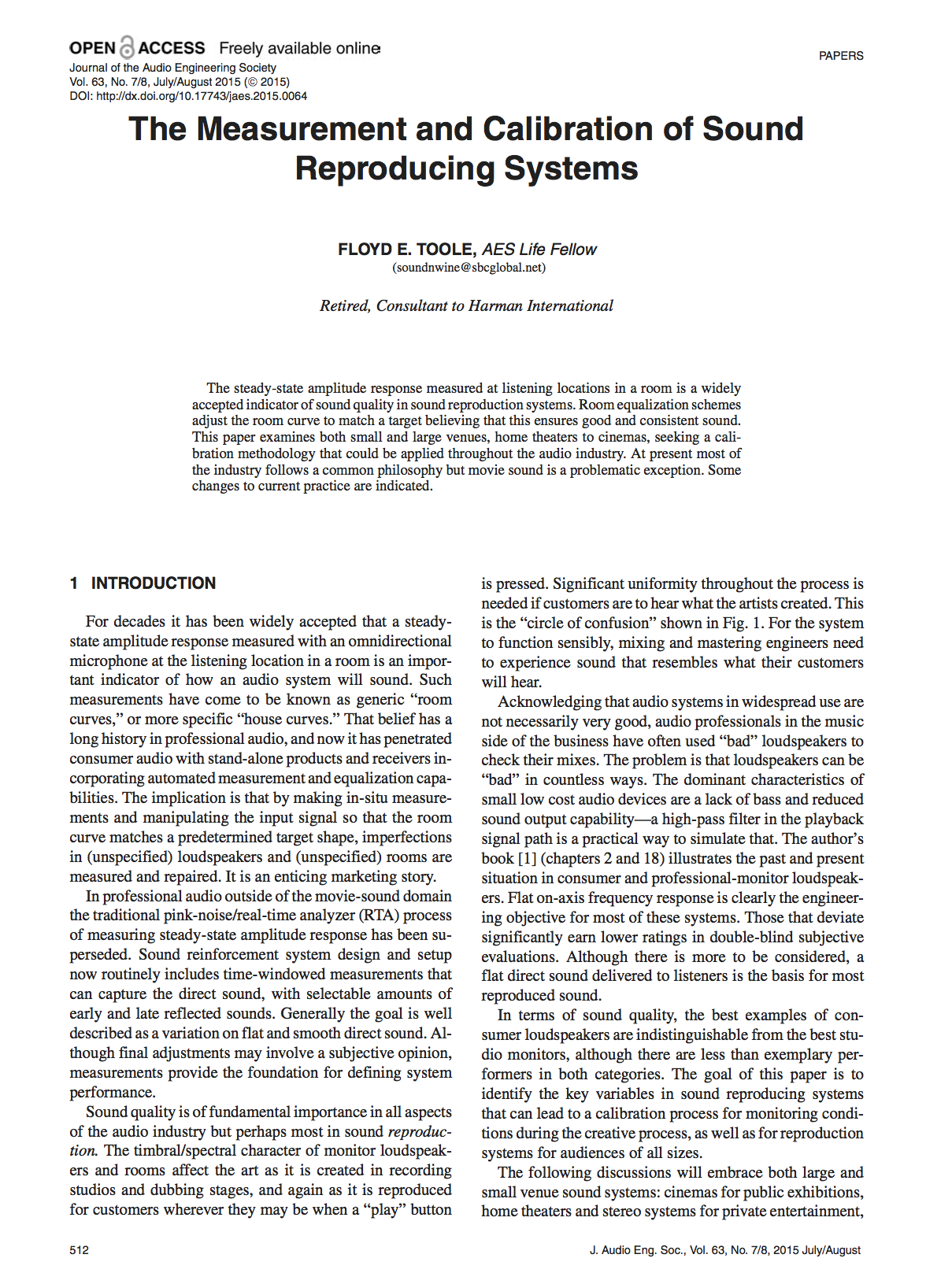 AES E-Library » The Measurement and Calibration of Sound Reproducing Systems

For decades, it has been widely accepted that a steady-state amplitude response measured with an omnidirectional microphone at the listening location in a room is an important indicator of how an audio system will sound. This paper examines both small and large venues, home theaters to cinemas...

I haven't read it myself, but to take an even deeper dive on this subject, I'd also recommend Dr. Toole's book on Sound Reproduction: The Acoustics and Psychoacoustics of Loudspeakers and Rooms.

It's been awhile since I read the above white paper, and some of Toole/Harman's other works, but I think some of the studies simply involved EQ-ing or calibrating some speakers to a spectrally flat response at the listening position in a typical room. And then giving the test subjects the ability to adjust the bass and treble where they wanted it for a variety of different music tracks, using shelving controls like this...

Some recent videos with Dr. Toole discussing Harman research on speakers, and the development of their spinorama measurement standard...

If you watch either of the above videos, btw, you will probably hear Dr. Toole say that there is no such thing as an ideal room curve, that's appropriate for all situations (or words to that general effect). And it's better just to let a neutral speaker with a flat on-axis response and smooth directivity do its own thing in a room... which is also my belief.

There is a wealth of spinorama data both here on ASR and on Erin's site which can be used to get a more general idea or approximation of a neutral loudspeaker's in-room response though. And one of the easier ways to access it is via Pierre Aubert's excellent database here...

The Perception and Measurement of Headphone Sound Quality- What Do Listeners Prefer? - Sean E. Olive

This video and article are a good summary of the articles that have been published so far.
They gloss over some important details though (for example, I find it misleading to compare the correlation numbers for the validation articles between over-ears and in-ears, given how different the methodology was).
You must log in or register to reply here.