This is a review and detailed measurements of the audio subsystem of my Gigabyte Z390 Z390 Aorus Master "gaming" motherboard. It was kindly built into my system by member @mkawa and is my everyday workhorse that runs all the measurements you see. It costs US $290 including Prime shipping from Amazon.

Besides being a high-end PC motherboard, it advertises appetizing audio specifications: 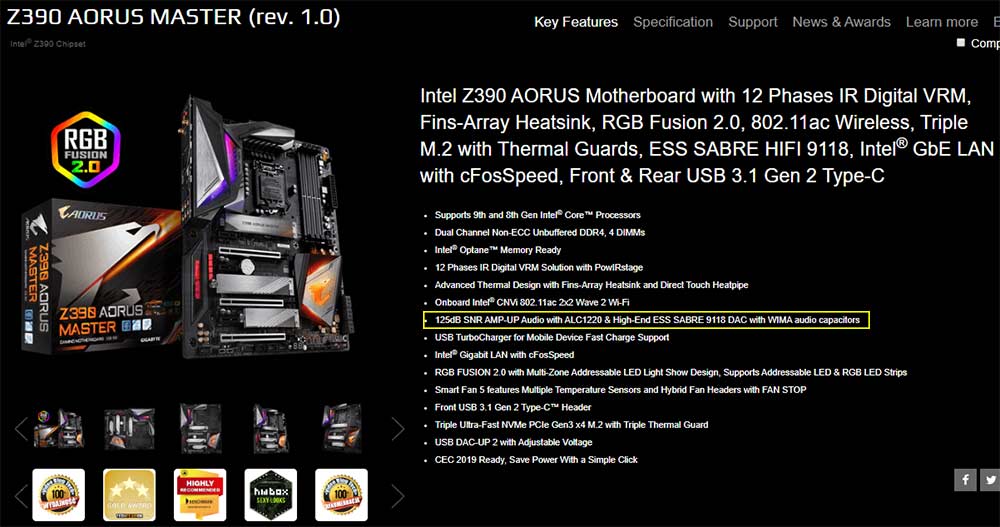 An ESS ES9118 DAC chip is used which has an advertised SINAD of 112 dB. If achieved, this would rival and beat many budget desktop DACs.

DAC Audio Measurements
There is multi-channel analog output plus a dedicated headphone output. The former is on the back and latter on the case. Let's start with line out in the back: 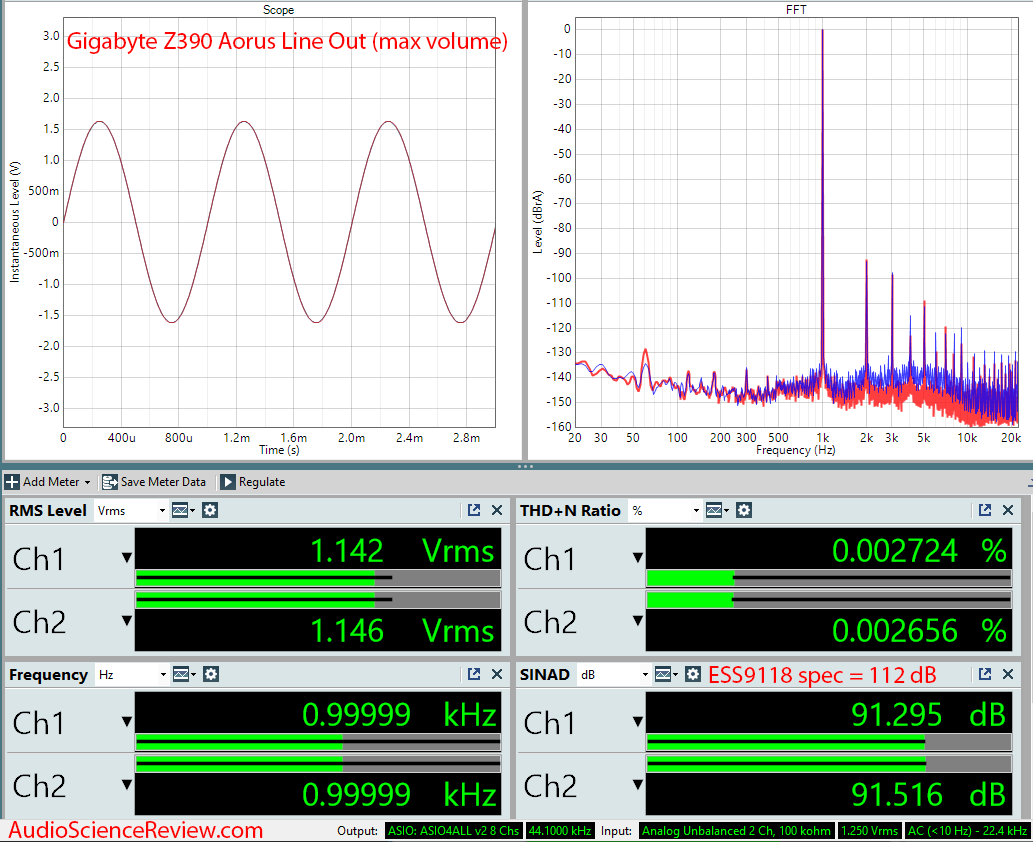 Output is limited to 1.1 volts which is way short of nominal 2 volts a DAC is supposed to produce. Distortion is rather high and dominates SINAD (figure of merit of distortion+noise) to the tune of 91 dB. This is well short of the ES 9118 specifications and lands the Z390 motherboard in "OK domain:

That said, for PC motherboard this is not bad. My last PC motherboard, the Gigabyte B8 only reached 83 dB. And a Dell XPS 8930 retailing for US $1,000 finished dead last in above chart at just 43 dB!

Dynamic range is actually quite good especially in one channel: 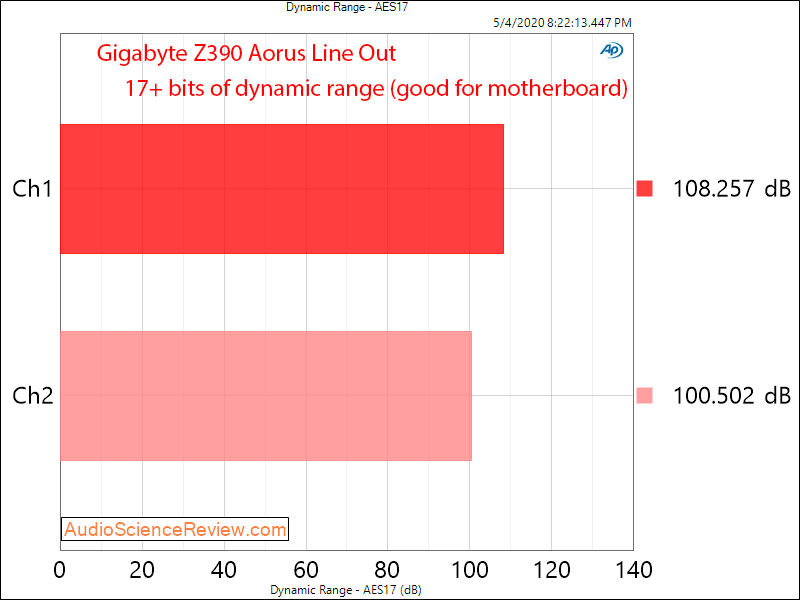 You have plenty of headroom to not add noise to any CD/16-bit format.

32-tone test track resembling "music" did not do any better than what we have already seen: 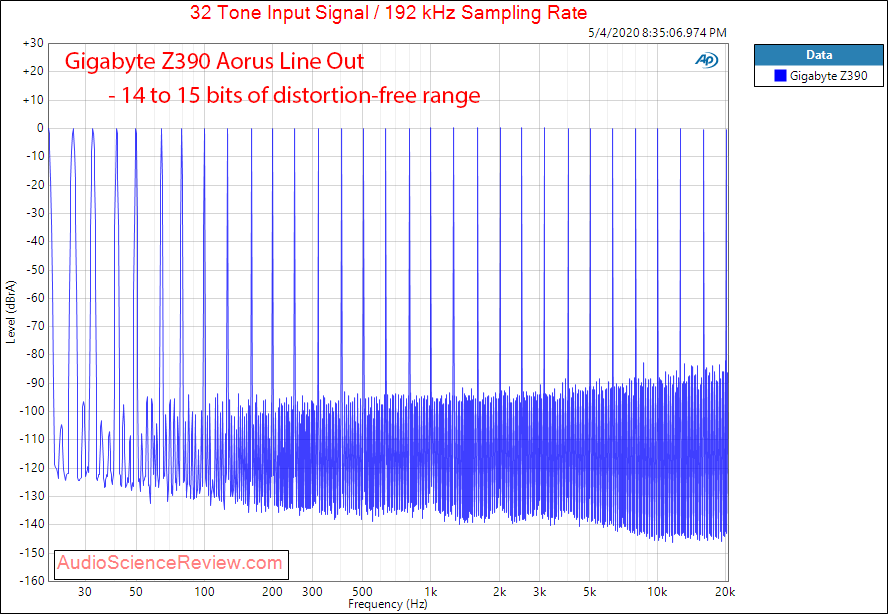 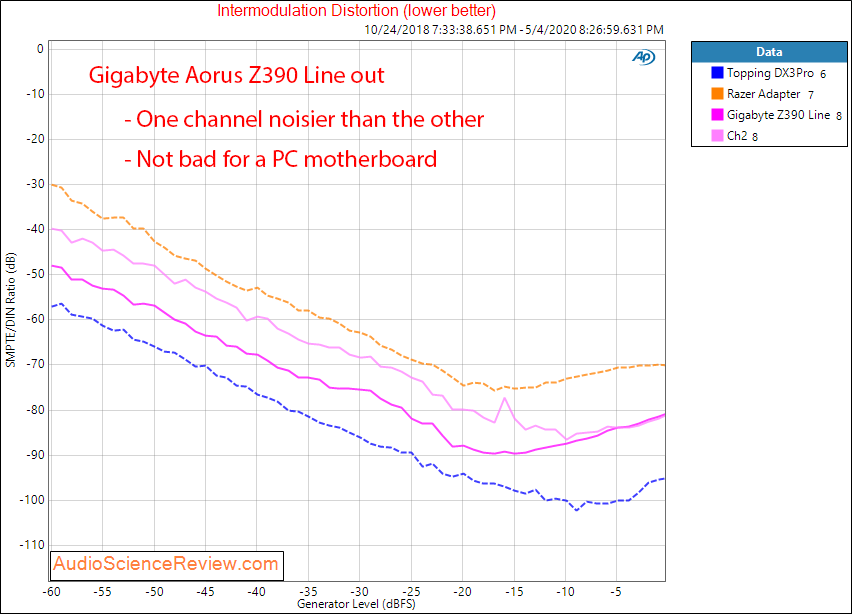 Filter response is the first "correct" one I have seen in a long time: 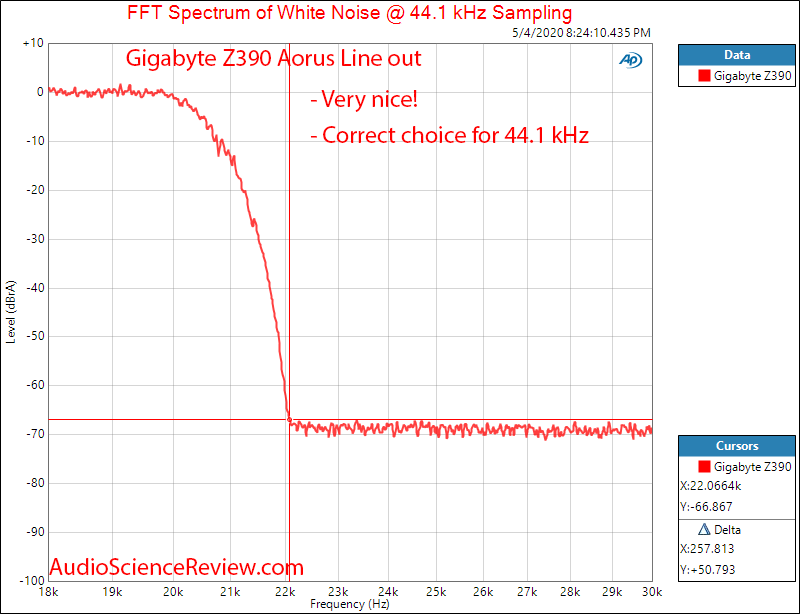 It nicely truncates anything past half the sampling rate at 22.05 kHz. Most DACs go out to 24 kHz which allows some aliasing. Attenuation of -70 dB is not a lot though and we see that it causes some problems later.

Jitter is not clean but not as bad as people dread on a motherboard DAC: 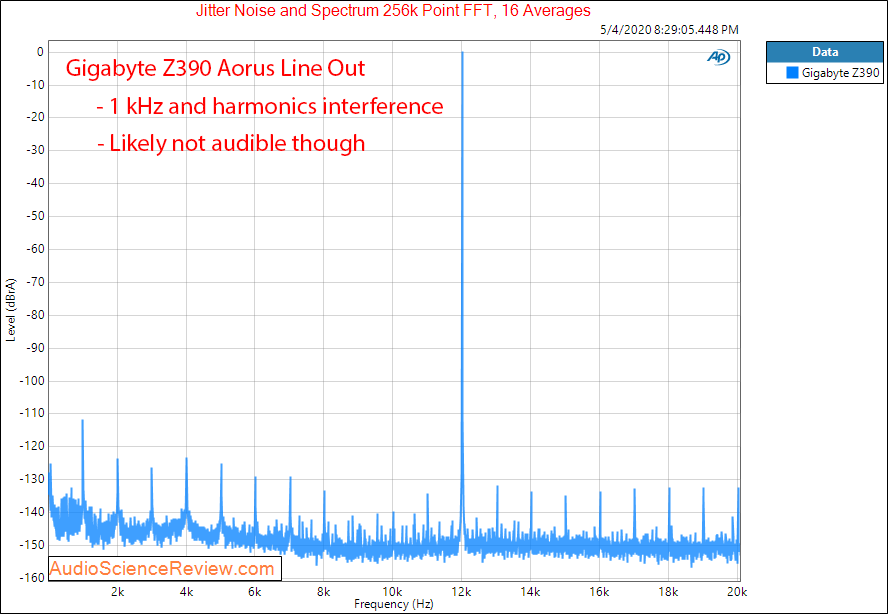 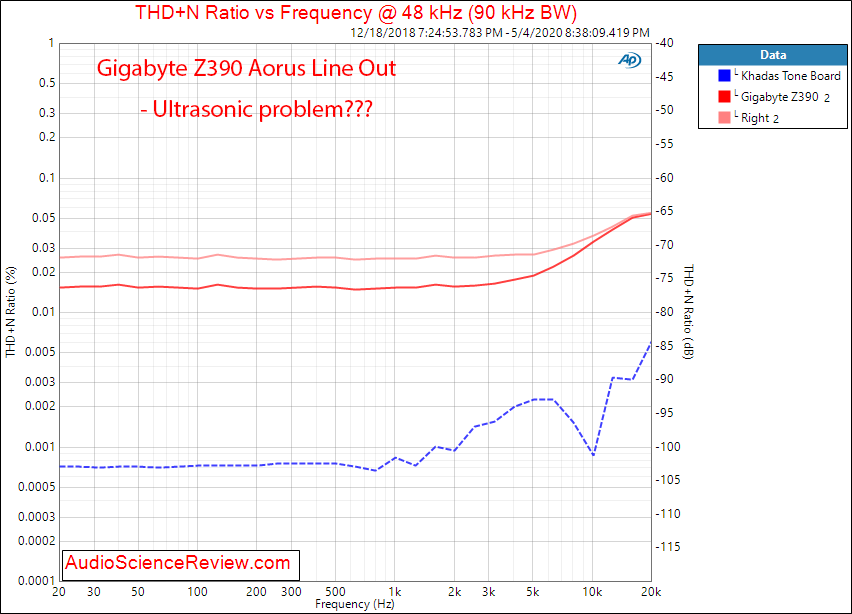 This test is never complete however without diagnosing what is contributing to it. That is, whether we have that high of noise and distortion in audible band or something else is amiss. So let's look at the spectrum: 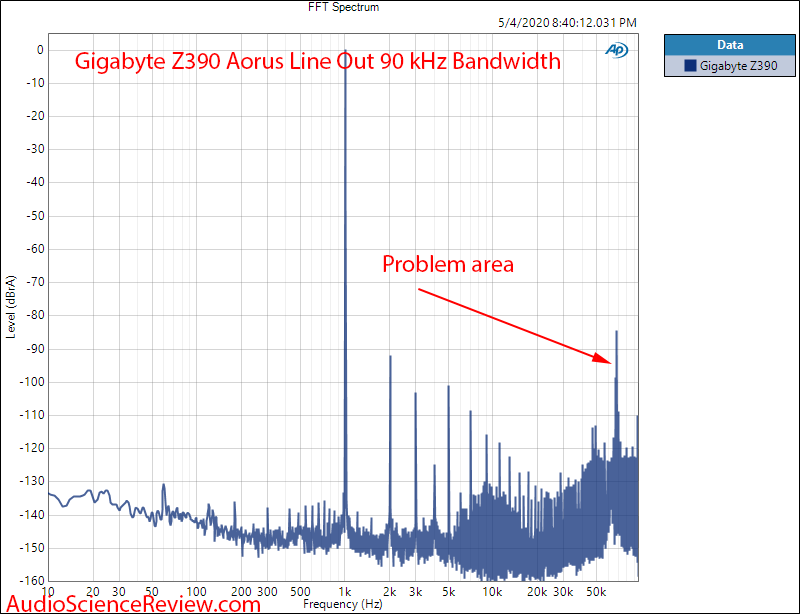 We see the problem to far right. That spike is there because the DAC reconstruction filter did not attenuate enough which allows our 1 kHz tone to alias there. Fortunately it is not audible so more of a measurement issue than performance.

I kept the best news for last: 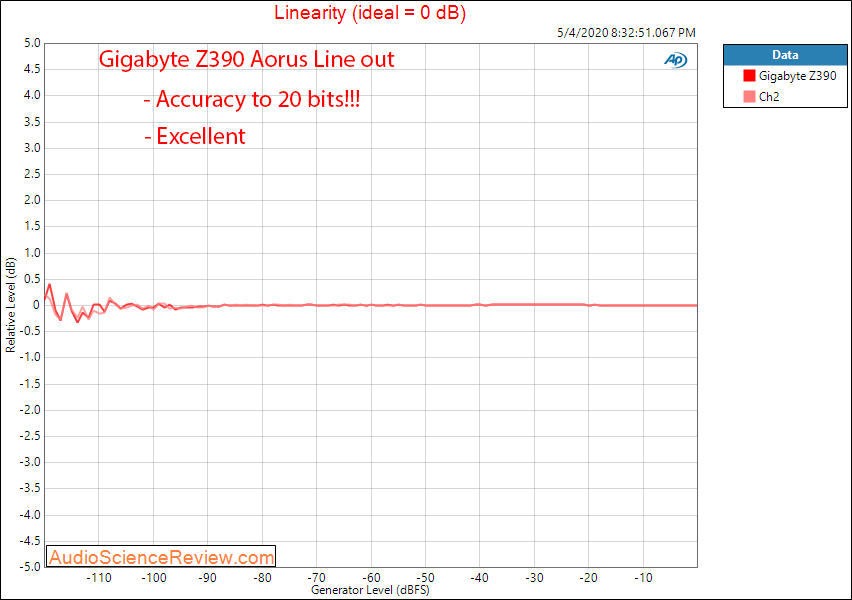 This is stunningly accurate linearity which even expensive DACs struggle with at times. The Z390 ES9118 DAC is well implemented to produce the correct output voltage down to a whopping -120 dB/20 bits. Can't ask for much more!

Headphone Output Measurements
Let's start with our dashboard of 2 volts out: 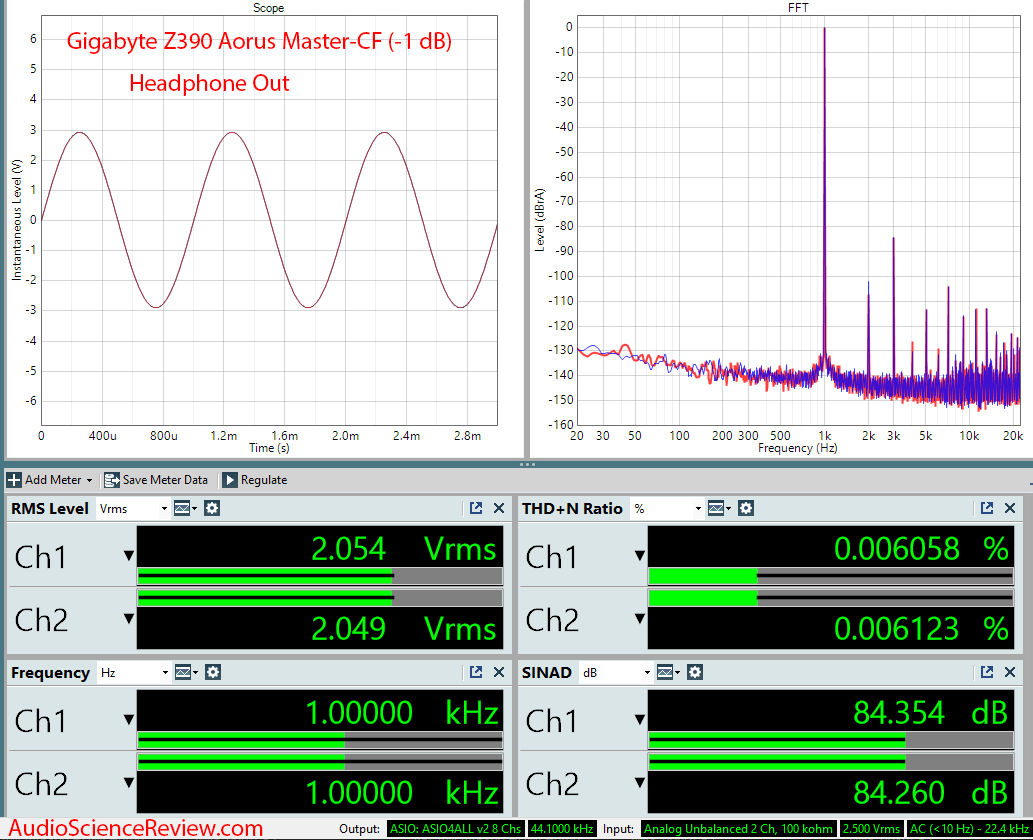 We see some loss of performance relative to line out but we are getting nearly double the output so this is not so bad.

Performance is actually respectable but sadly not much power: 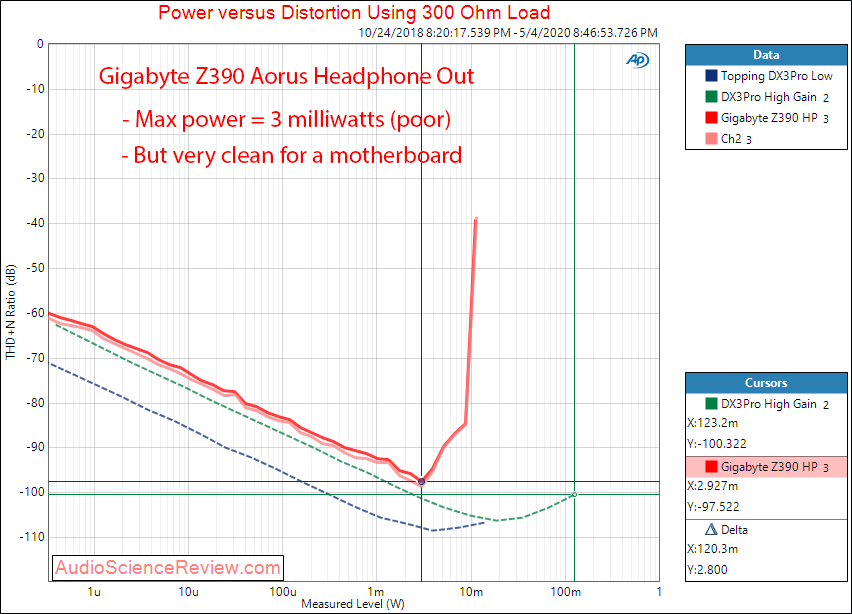 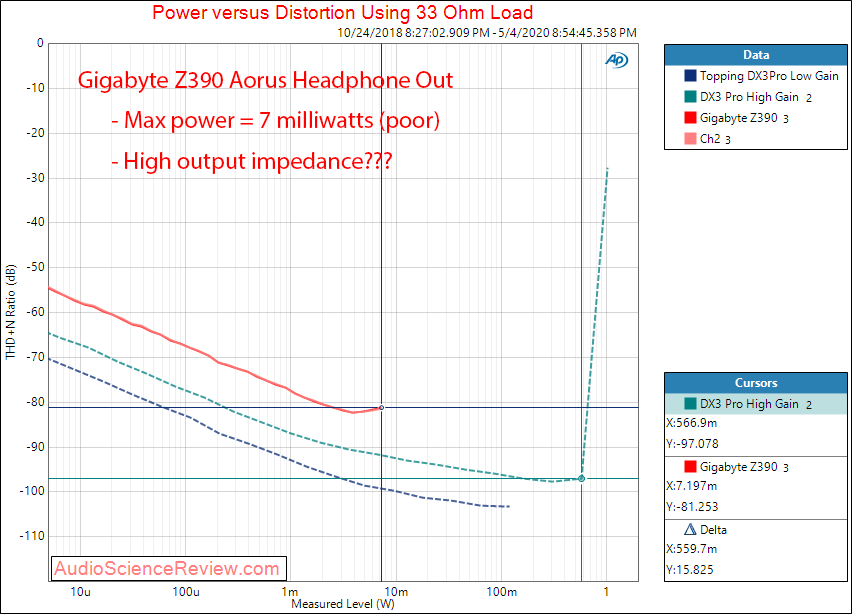 When this happens, usually it means the output impedance is too high and boy is it high:

It is one of the worsts I have ever measured in any audio product! Consequences are listed on the graph. I suggest staying with high impedance headphones (at least 300 ohm).

Conclusions
Considering how bad PC implementations of audio can get, the Gigabyte Z390 Aorus actually does well. Grading on a curve, it is one of the best audio subsystems I have seen in a PC. In absolute terms though, a $99 DAC will run circles around it but audible difference may be fleeting. In other words, what is there is "good enough."
What is not good enough is the headphone output with its dismally high output impedance and inadequate output power especially with low impedance headphones. There are headphone dongles that do better than this output!

Overall, I take the rather clean multi-channel line out and give a passing grade to Gigabyte Z390 Aorus audio subsystem. Get yourself a headphone amp and you may be good to go without having to get a DAC to go with it.

I was watching this youtuber saying he has quit his regular job and aims to do a video almost every day. I have been doing a review everyday and don't recall getting enough money to quite my job. Or wait. I already quite my job for other reasons. Darn. Until I think of another reason to beg for money, why don't you donate anyway using : https://www.audiosciencereview.com/forum/index.php?threads/how-to-support-audio-science-review.8150/
Amir
Founder, Audio Science Review
Founder, Madrona Digital
Review Thread Rules
My Technical Background
My YouTube Channel

Thank you so much for reviewing this board! 7mW of whopping power with 78ohm output impedance WOW is all i have to say.

Is their a headphone we can recommend on this board with this level of performance?

$290 board performing like this i wonder how $50 boards would fair lol perhaps 1mW of power?
Modi 3
Magni Heresy
AKG K712 Pro

Not bad for onboard.
“Knowledge speaks, but wisdom listens.”
― Jimi Hendrix
W

Important for computer as my OS volume control is 20 for listening to music but 100 for movies.
S

This is my motherboard! Will you test the "DAC up 2" functions?

That's what I've always wondered. If disabling USB power does anything at all.
OP

Awesome, because this is how the company markets it lol. 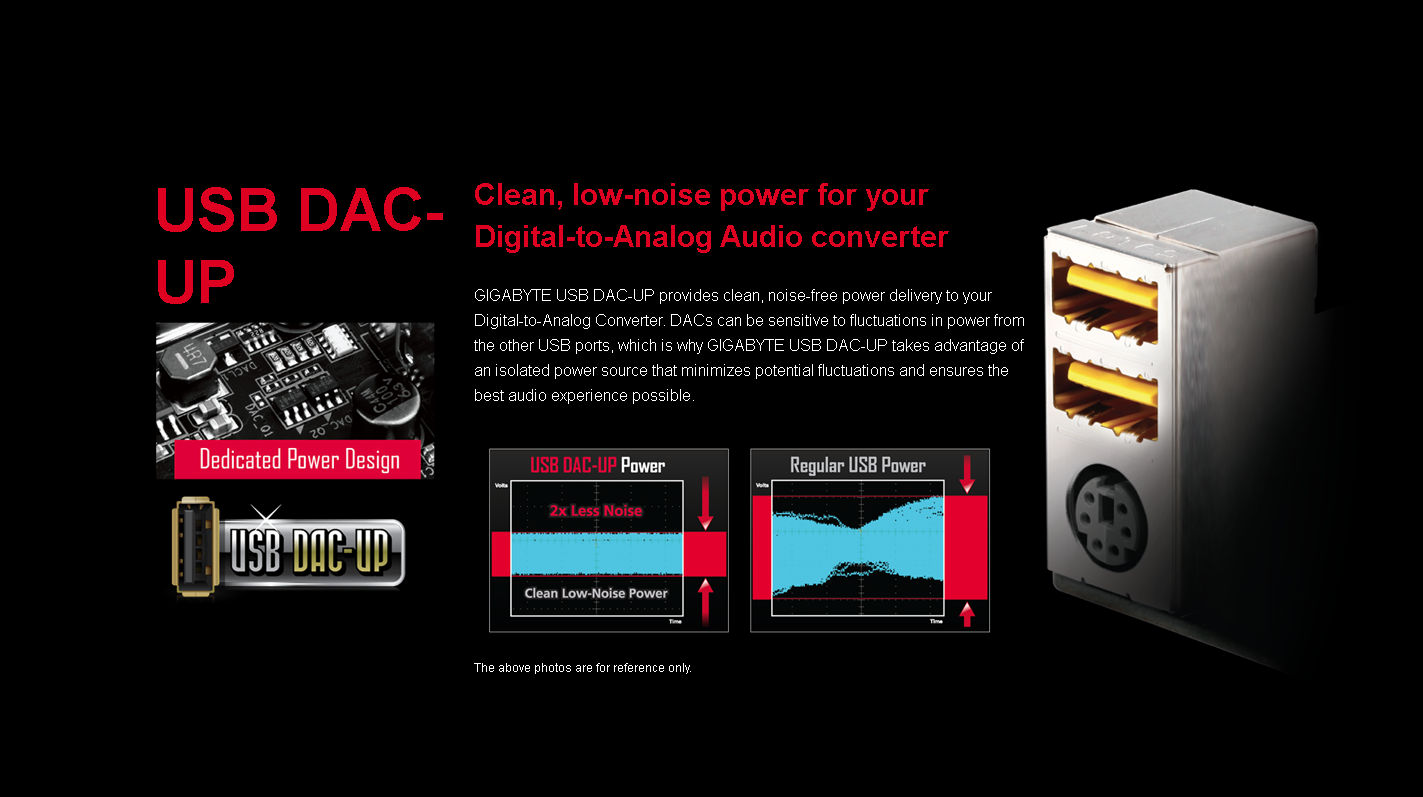 Thanks for everything you do Amir!

Bossman, can you measure voltage of the USB ports by any chance? I've seen some mobo manufacturers advertise dedicated 5v linear power power supplies for the USB I/O on motherboards. I would hope they pan out with respect to these claims.. With all the supposed validation motherboards need to go through, I'm starting to think many are lying about many things (more regularly than previously assumed).

EDIT: 125dB SNR, on what planet? I didn't think we needed spec sheet advertising of another companies components, I would have assumed 125dB SNR would be an advertisement for the performance YOUR product provides -.- For shame.
S

They even have some strange voltage compensation usb function (increase or reduce) im not sure what that's supposed to be for though.
B

While testing the output impedance was the output set to "headphone mode" or "speaker/line out" in the driver control panel? Also which output jacks were tested, front or back?
S

The back is line out and the front 3.5mm senses impedance. I dont think there is changing any modes.
J

I dunno if front panel is set in stone for headphone out, but traditionally realtek chips ask you "what have you plugged" after sensing a new plug, and you can choose whether it's headphones or line out (or even mic).
Last edited: May 5, 2020
S

Thanks for the review!!

Anyway i think for motherboards audio a stress test analysis should be added to look for degradation under a typical PC load. it would be useful especially for gamers

Very interesting since I precisely use an Aorus Z390i (itx version) right now.

But I never planned to shit on my ADI-2 DAC using its onboard outputs. For now, I'm just happy to know I won't become deaf the day I will have to.

Edit: just realized my Z390i uses a Realtek chip instead of an ESS one. Well, that's quite a shame, though it doesn't matter after all.
Last edited: May 5, 2020
VintageFlanker's Review Index

VintageFlanker said:
Very interesting since I precisely use an Aorus Z390i (itx version) right now.
But I never planned to shit on my ADI-2 DAC using its onboard outputs. For now, I'm just happy to know I won't become deaf the day I will have to.
Edit: just realized my Z390i uses a Realtek chip instead of an ESS one. Well, that's quite a shame, though it doesn't matter after all.
Click to expand...

Although it's just marketing until measured... at least specification-wise the ALC1220 is no slouch:

Does it get any closer to spec than the ESS in this MB? Probably not. And even if it were the best onboard implementation ever measured... it would still be mediocre in comparison to your ADI-2 of course.

I chose my last gaming laptop from them (Gigabyte) for 3 reasons... ESS audio, 144Hz display, and dual PCI-e SSD slots with a 2.5" SATA bay as well. Does it actually sound any better? Doubtful, but since I figured I'd probably never be dragging along my DAC, or even big headphones (just some cheap IEM) it was worth it.

Unfortunately the "laptop" is about 11 lbs. and huge - so by the time I'm bringing it, the monstrous power supply, mouse, etc. - I could have tossed in a Topping NX4 or similar and never even noticed the extra weight.

"Just because I don't say it, don't mean I ain't thinkin' it - next thing you know they'll take my thoughts away." - Megadeth "Holy Wars... The Punishment Due"
I like all genres of music: progressive metal, death metal, thrash metal, black metal, speed metal... even some goth and symphonic metal.​
W

sir_frigorifero said:
Thanks for the review!!

Anyway i think for motherboards audio a stress test analysis should be added to look for degradation under a typical PC load. it would be useful especially for gamers
Click to expand... 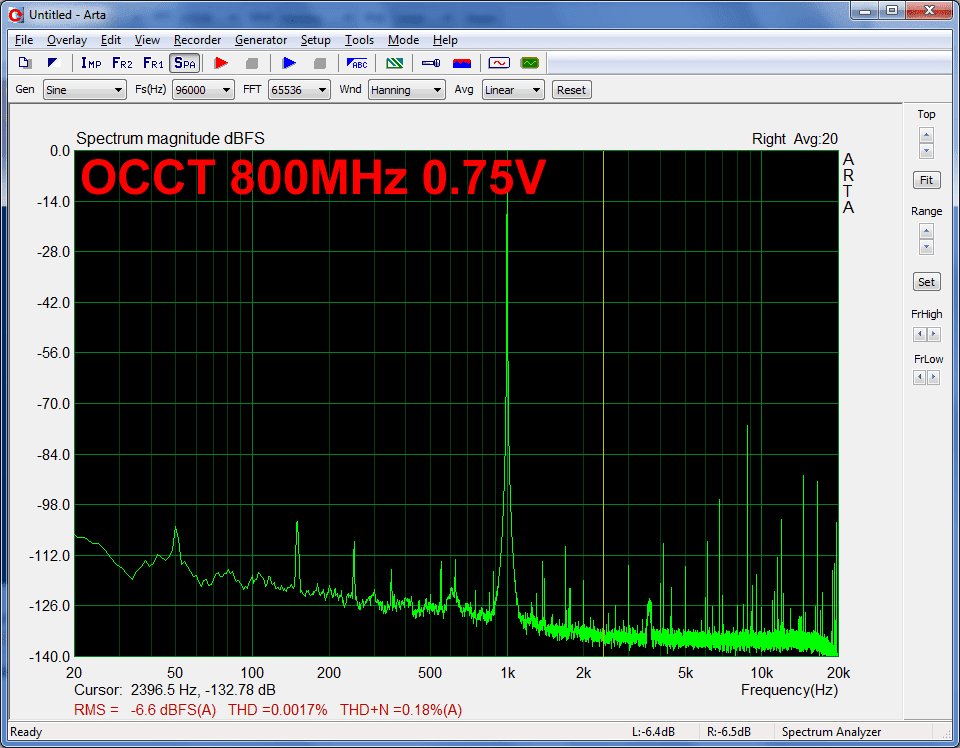 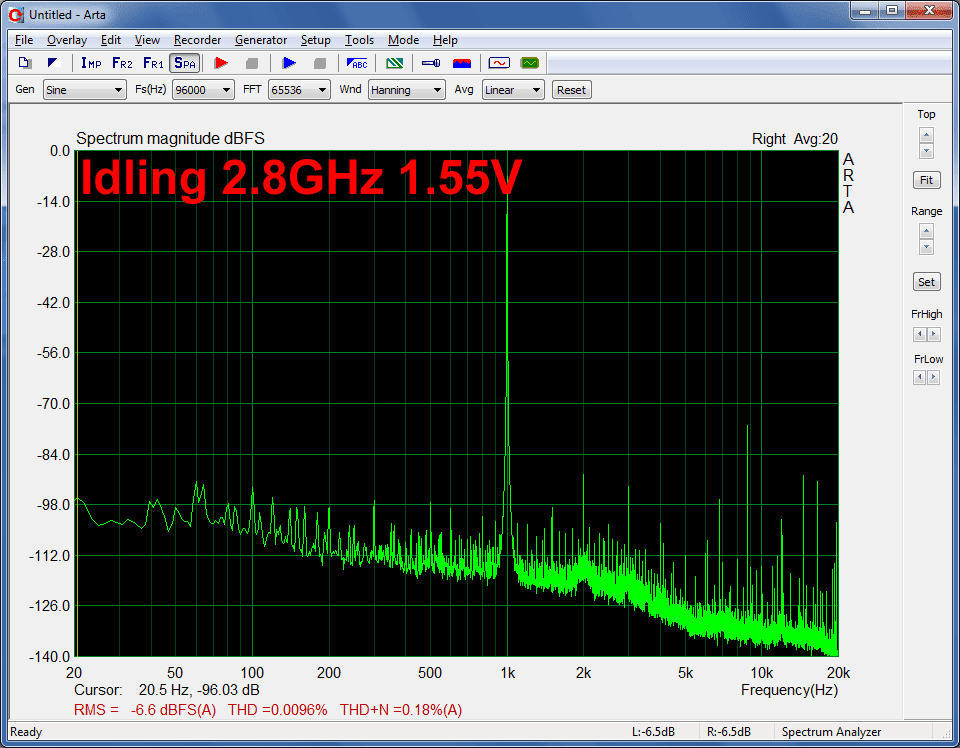 I'm thinking those captions are reversed? Unless SpeedStep is working in reverse on your system.
"Just because I don't say it, don't mean I ain't thinkin' it - next thing you know they'll take my thoughts away." - Megadeth "Holy Wars... The Punishment Due"
I like all genres of music: progressive metal, death metal, thrash metal, black metal, speed metal... even some goth and symphonic metal.​
N

It would be nice if you could review z97 sniper g1, there is also a z290 with the same onboard, creative 3Di. They have a lot of power, not clean at all tho
You must log in or register to reply here.

Can a motherboard output audio @ the 3.5mm jack and the JDS Labs ATOM DAC+ simultaneously?